After I already showed you my impressions on Anime Fall Season 2010 in part 1 with shows like Amagami SS, Fortune Arterial, Hyakka Ryouran, Sora no Otoshimono: Forte, Ore no Imouto…, Motto To LOVE-Ru, Tantei Opera Milky Holmes and Yosuga no Sora.
I will now write something about Arakawa Under the Bridge x Bridge, Soredemo Machi wa Mawatteiru, Otome Youkai Zakuro, Shinrei Tantei Yakumo and at least Panty & Stocking with Garterbelt. 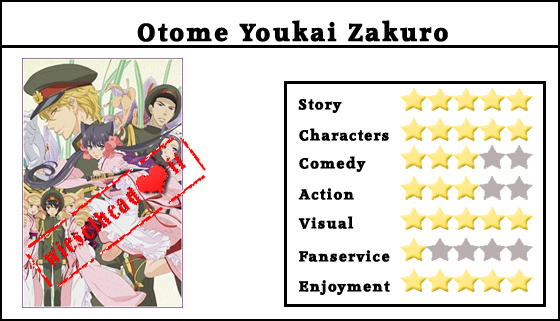 The story takes place in the Meiji Era (1868 until 1912) in a slightly alternate Japan, where spirits, half spirits and normal people are living together in the country. Unfortunately half spirits are shunned and condemned by the normal population, because there are many rumors and prejudices about them. The 4 half spirit girls Zakuro, Susukihotaruare, Bonbori and Hoozuki were saved by Kushimatsu a fox spirit who acts as their teacher and guardian. Now they are living in the ministry of Spirit Affairs where they solve incidents between humans and spirits. One day a delegation of 3 young human soldiers arrives at Spirit Affairs, the soldiers have to team up with the half spirit girls to support them with their work and to promote interracial understanding between spirits and humans.
Otome Youkai Zakuro was produced by J.C. Staff, they had many shows in the Fall Season.
What I always liked in anime shows of J.C. Staff was the way they stage boy-girl relationships, in this show we have 3 of this nicely staged relationships. Well, these half spirit girls have nice personalities and are really beautiful and enchanting, their dresses give them sort of elegance as well =D. The interaction between the characters is very well done, it’s nice to see how the soldiers and half spirit girls are growing together and come close to each other.
In terms of animation style and quality Otome Youkai Zakuro leaves a good impression, there are nicely drawn surroundings, fluid animations and a lovely characterdesign in it.
It was a good decision to add this show to my watch list of Fall Season 2010. I’ve watched the whole show last week and I have to say that Otome Youkai Zakuro became my personal favorite of Fall Season 2010. The story of this show is really interesting, there are nice comedy elements, good drama parts and a nice part of romance. In my opinion the show deserved some more episodes, but despite from that J.C. Staff did a very good job in putting everything into just 13 episodes. 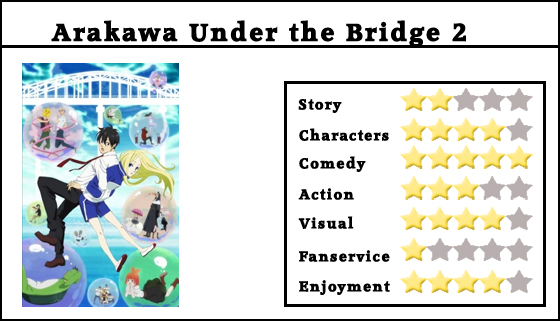 Here we go with more Arakawa under the bridge, a new Season of the Top Hit from Shaft.
This show never had a real plot to begin with, but in the second season it felt a bit more plotless, in one episode it is said that Nino is a Venusian and that the others want to visit her planet, but even that small trace of plot vanished most of the time between the other random events of this show. Nevertheless these small events are entertaining and most of the time simply hilarious. The comedy is as good and as weird as in the first season because I got more used to the characters the gags made me laugh a little bit harder. The characters remained great, we had good scenes of Whitey, Sister, P-Ko, Star etc and even a few new characters appeared. The animation style looks very good everything appears clean, crisp and colorful. Opening and ending theme this time were really great, both are under my favorites from the Fall Season 2010 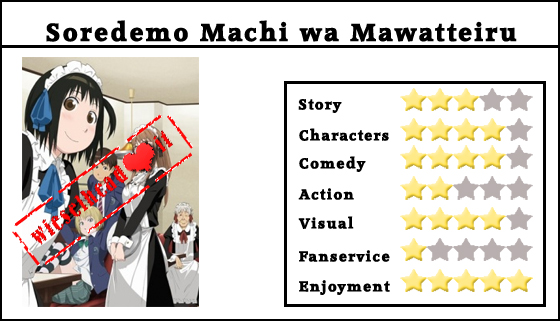 In this show we are following the crazy “normal” adventures of Arashiyama and her friends and the other citizens of the shopping district. Arashiyama is a clumsy girl with a love for detective stories and a knack for getting into trouble. She works in an old lady’s lackluster maid café in a small shopping district, which is largely unsuccessful in attracting customers. Soredemo Machi wa Mawatteiru is also a show from Shaft, it has some similarities with Arakawa under the bridge, but Soredemo has the crazy humor mixed in with more normal slice of life elements. We see Arashiyama in her freetime, working at her job, at the school and because her grades aren’t the best she often has to do detention classes.
At first I didn’t really get this kind of humor, but I felt that this show had something interesting and special in it, this show has some sort of unpredictability to it, you never really know what crazy turns the story will take and how the characters will react in the next second XD.
Watching Soredemo Machi wa Mawatteiru was a great experience I nearly died from laughter very often, the crazy antics of Arashiyama, her friends and the other characters are hilarious and very entertaining. Well the show is not just about crazy comedy, it also has likeable and interesting characters and the different kinds of stories which were told are also very well made as well. 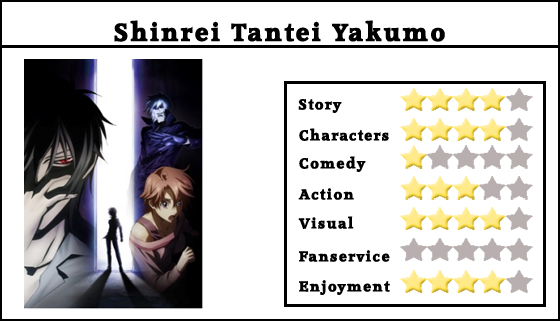 The story centers about Yakumo a young highschool boy who earns his money by offering help to people who have problems with ghosts, with his red eye Yakumo can see the ghosts of dead people and can also communicate with these ghost. Yakumo is a very gloomy and moody acting guy who hides his sympathy torwards other people by giving them sarcastic comments, you could say that he’s a tsundere character, because he isn’t such a bad guy.
One day Haruka, a high school girl from the same school, asks him for help with a ghost problem. Haruka finds interest in him and just ignores his rudeness and the sarcastic comments he always gives her and starts to visit him quite often.
Yakumo himself doesn’t say it directly but the way he acts shows that he begins to like her a lot, because Yakumo’s cases are mostly related to crimes he sometimes supports the grumpy old school policeman Gotou. The cases Yakumo solves are quite sad sometimes, but the show also has some heartwarming moments. The story isn’t very special but the interesting setting and the variety of characters are very good in my opinion.
The last part of Shinrei Tantei Yakumo is very well made and emotional intense, the last episode of this show was very well done and it had a satisfying ending. 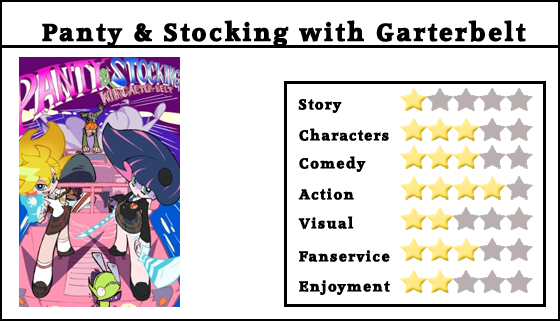 Heaven sends two fallen angels to Earth and tells them to collect Heaven Coins if they want to avoid falling all the way to Hell. These Heaven Coins can be obtained by defeating peculiar ghosts, the ghosts are tricky but the two angels have very unusual weapons at their disposal: Panty’s panties turn into a gun and Stocking’s stockings turn into swords. Sounds interesting but unfortunately there wasn’t much plot or coherency between the single episodes. For me the animation style was ugly, because I hate this cheap and silly looking US style, after some episodes more or less used to this kind of animation style, but I guess if they used the animation style from the transformation sequence of Panty and Stockings I would’ve liked the show a bit more. Well I don’t want to bash too much but overall it wasn’t really my taste.
At least I liked most of the characters, Panty and Stockking were a funny bunch of characters the cursing and the unmodest behaviour of the girls was always very funny. The two Demon Sisters Kneesocks and Scanty were also very funny and cool *RUULE* 😀 .
The different episodes left me with mixed impressions, some were good and others were lame and boring, sometimes these sexual, puke and poo jokes got old, actually there were some episodes that I liked a lot, the one with the zombies, the one at the beach and the last two episodes which had a small but cool story as well.

To conclude my impressions on the Fall Season I’d like to say that I should have watched less anime shows in this season, keeping track on all of them was a bit exhausting. My 4 favorites were Otome Youkai Zakuro, Soredemo Machi wa Mawatteiru, Amagami SS and Motto To LOVE-Ru ,some shows like Shinrei Tantei Yakumo turned out quite good as well, others like Ore no Imouto… were pretty medicore and a few also seemed like a real waste of time for me.
Im still watching Star Driver and plan to start with To Aru Majutsu no Index II soon, they are still airing so maybe I will write about them in the future.

What were your impression about these shows I’ve mentioned?
Have you watched some other good shows I haven’t watched in this Fall Season?