Hi people after a break of nearly two weeks Im back with a new figure named Buddy on review.

Buddy is a 1/8 scaled figure  manufactured by ALTER, she was released in November 2010.
The origin of Buddy is a visual novel and a 3D rpg  game called “VOICE FROM HAR MEGIDDO” developed by Leaf and published by Aquaplus for the PC in 2008.
httpvh://www.youtube.com/watch?v=0QK2jpFEpX8&NR=1

Surprisingly Buddy is one of the bad guys in this game, she is described as a timid and emotionless person. In the game she is teamed up with a guy named Swen whose commands she obeys unconditionally. Judging from my little research in gameplay videos and CG pictures Buddy isn’t that bad at all, she just met the wrong persons in life. Later she even helps the good party members, after they treated her in a friendly manner. 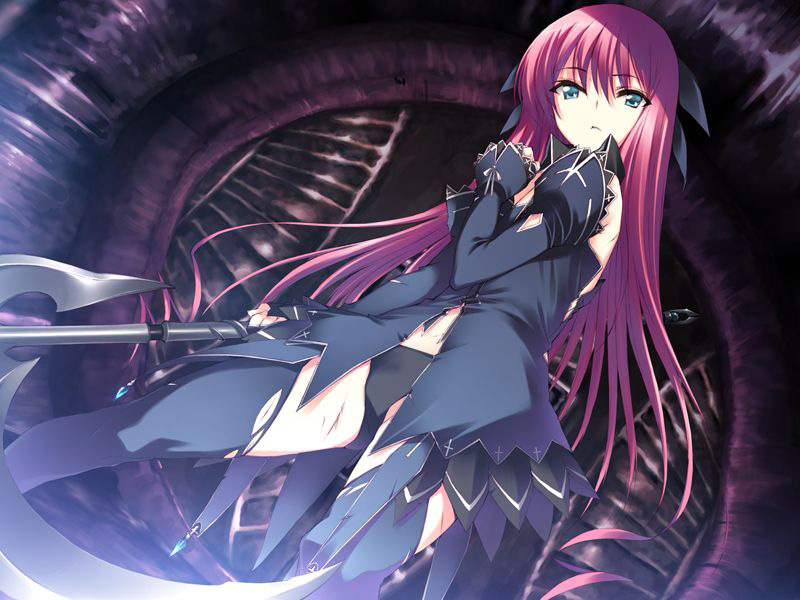 As Buddy was announced I was very interested in her, but in the end I became unsure about ordering her and didn’t do it on the release date. After looking at Tier’s review and shortly after that at Visiual Fanfare’s review of Buddy I got the feeling that I really missed a figure I should have in my collection. Nowadays preordering a figure soon enough is essential when you want a copy and don’t want to pay horrendous prices afterwards on ebay or local online shops.

Well there are exceptions where nice figures also can be found in the bargain bin, its very unpredictable nowadays. After I searched for remaining Buddy figures on the net, the popular shops said Sold out sold out sold out. Local online shops from my region wanted up to 110€ for her, but I wanted her for a better price, in march 2011 I discovered an auction of her at ebay in new condition with unopened box for something around 84€ *Yeah*.

Now lets start with Buddy’s review, in comparison with anime related figures Buddy shows a rather serious than cute face expression, my personal highlights are her slanted eyes and the detailed sculpted lips of her, from different angles you can interpret her face with feelings of uneasyness, sadness or coldhearthness. Her detailed sculpted long hair is painted in a pale pink colortone and two of her strands are styled in a funny looking corkscrew shape.

Buddy wears a beautiful navy blue dress with jags in different lenghts, on the four longer outer jags there are placed transparent blue gemstones on metallic painted straps. The dress has a simple yet elegant look, the fine white ornaments and outer lines are painted very accurate and clean ALTER did an impressive job here. I like the sleeves with the big collars a lot, the lower part of her dress is two layered the layer below is black. Under her dress Buddy wears plain black panties and dark blue stockings which reach very high. At her hands she wears fingerless gloves and a big black ribbon is attached at the back of her head. The whole dress from the collar to the shoes, has a very matching style, all these wrinkles, shading and the flow give her dress have a very dynamic look and feel.

To me the legs of this figure appear rather short, well maybe its because Buddy is still a young girl or the the stockings let appear her legs short, I don’t really know. Her stance and especially the position of her right arm shows that the scythe she’s using as her main weapon is a bit heavy and hard to handle for a small personal like Buddy, but in the discription its said that she is very skilled in using the scythe.

On first look Buddy’s appearance is mainly menacing, her upfront dress with the visibly belly and panties as well as her bare back and shoulders add sexyness to this figure, additional to this her corksrew hairstyle and the big ribbon behind her head also shows traces of cuteness.

This figure is a nice one, the dress has a creative and well made design. Buddy shows an very expressive face expression beautiful eyes. I have to admit that the pose of Buddy isn’t the most creative one, she just stands her holding her scythe, but in terms of sculpting and proportions its very well executed. The also very well executed paintjob is done without any big flaws, so far I couldn’t find one. The base is a round and made of pink clear plastic, the cogwheel pattern on it looks really nice, maybe with a second non transparent colortone on it I would like it more.

Not that I care much about it, but Buddy is a nonfamous character of a not so popular PC game, I would like to know how ALTER came to the idea to make a figure of her, maybe the boss came in and said “I played a game recently, lets make a figure of my favorite character!” XD

Special thanks to Sutekiii and his friend ariel_newworld for translating the few character informations about Buddy for me from the official website.

Two other reviews can be found at tentaclearmada and visualfanfare

See you next time, thx for your interest 😉