Hi everyone, are you ready for 2016? As nearly every year recently, I will show you my devastating figure hobby purchases and other interesting data. The plan for this year was to cut back on figure expenses, while in 2014 I received 25 figures, in 2015 it were 18. 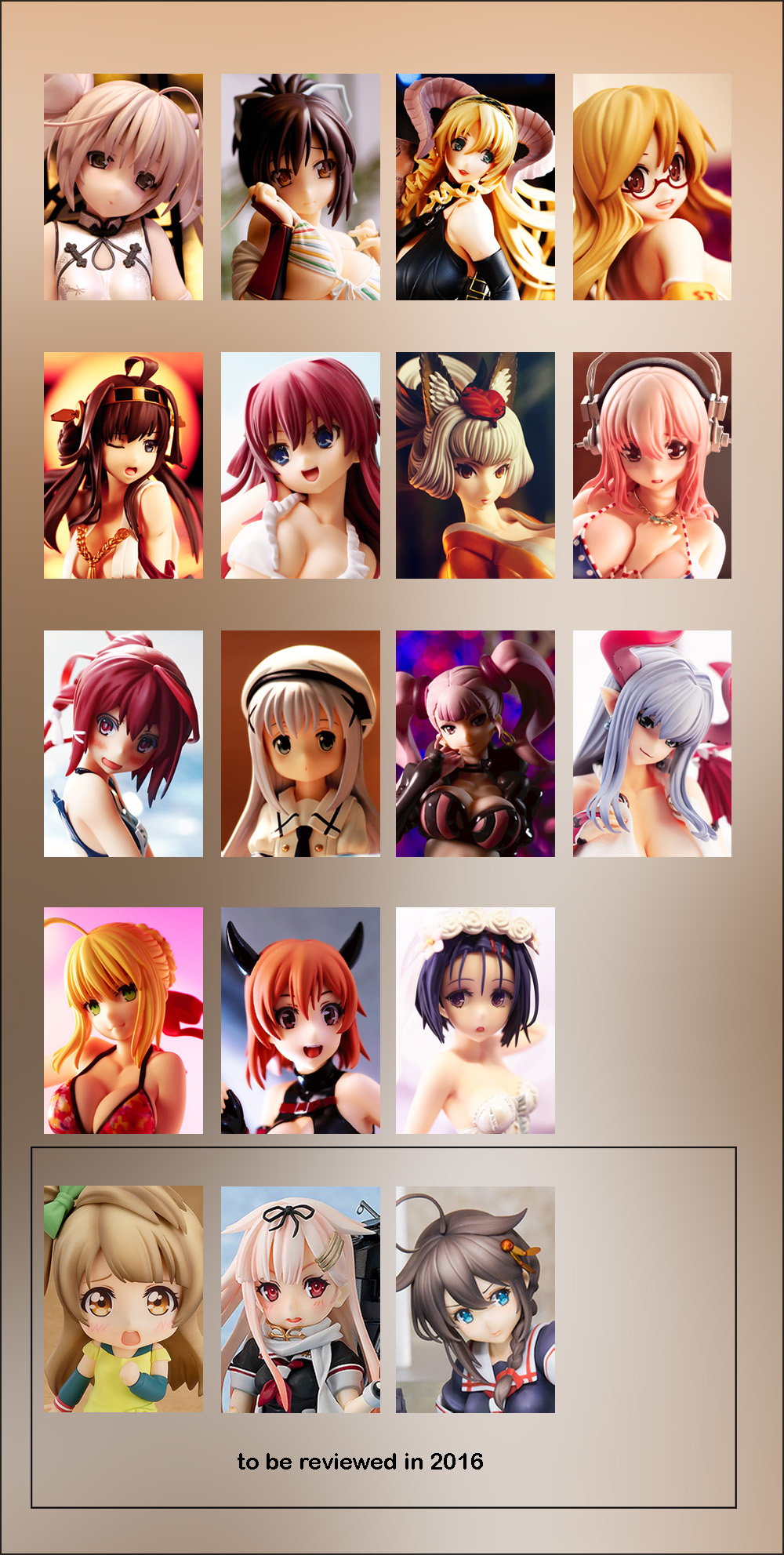 Looking back I passed on a number of lovely figures in 2015. When I look at my reviewed figures of the year, I nevertheless feel something like “Collectors Pride” about most of them. They were carefully considered purchases and things I really wanted to have. I developed the idea that figure collecting in moderation is more satisfying in the end.

It’s no secret that I developed a stronger interest in the fashion doll, Dollfie and SmartDoll whatever hobbysphere. The reduced figure expenses made me go wild with buying clothes and other stuff for my Ladies. With Riō my doll family grow a little in late August this year. 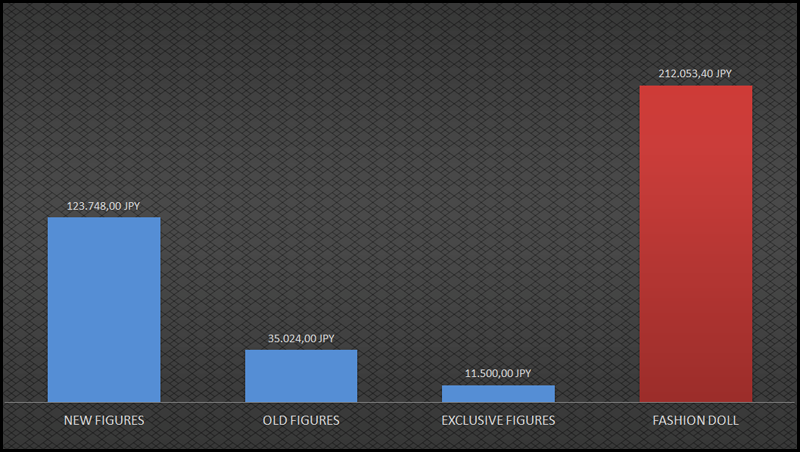 Here you see what happened and where most of my budget went to (shipping not included).

As little comparison I put the complete figure expenses (New, Old, Exclusive) and doll stuff expenses against eachother, also 2014 vs 2015. Ahhh, what have I done ヾ(=ﾟ･ﾟ=)ﾉ. 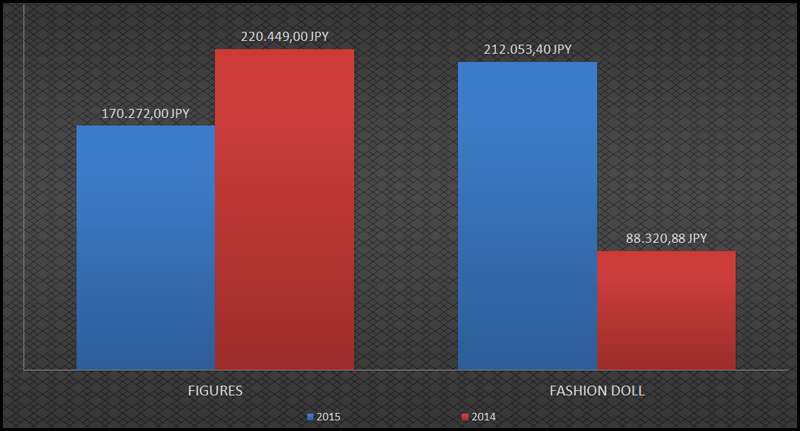 I could create a few more doll dedicated charts, but I decided that we won’t look more into the fashion doll expenses this year, it just consists of many clothes and a few bodyparts ^^.

I ordered 2-3 figures on average every month, you see the increased prices for normal run figures make the hobby quite expensive and create heavy sums every month. 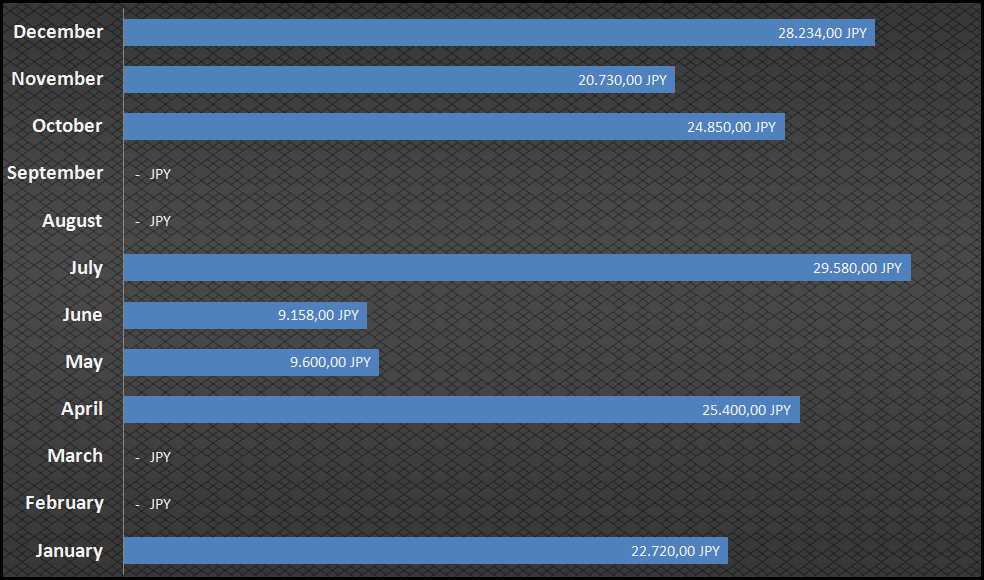 I managed to have 4 months without figure orders and 2 months with only one figure to pay.

Max Factory apparently was my favorite manufacturer of 2015, with I-168, Sairenji Haruna and Yui Yuigahama they released marvelously pretty figures, I’m delighted to have.

I was more interested in the “bigger” girls, the 1/6 scale is very appealing for me, it combines a nice level of detailism and a reasonable size and it is a perfect scale for sexy figures ♡＾▽＾♡. After some years I also bought a Nendoroid again, the Minami Kotori one. There is something special about Kotori I never noticed while watching Love Live.

Compared to the raw figure costs 16% appear surprisingly low. Unfortunately as European citizen, I have to pay a customs fee for nearly every item from overseas, which always increases the complete costs for one delivery.

I definetely should try to reduce the doll clothes expenses next year, more focusing on necessary clothes, since no Doll #4 is planned it should be possible to spend less money.

For 2016 I want to continue with collecting figures, still in moderate numbers.

So how were your hobby expenses?