Welcome to a new figure review, it’s about the 1/8 scaled magical girl Prisma ☆ Illya, I like cute magical girls a lot so I didn’t want to miss the cute Illya figure. I received this figure right after my vacation, I had to choose SAL shipping so that Illya won’t arrive when Im not at home.

Illya was manufactured by Phat Company and actually released on the 14th May in 2013.
Illya is scaled 1/8 and is 19 cm in height, she was sculpted by the experienced Mazaki Yuusuke. 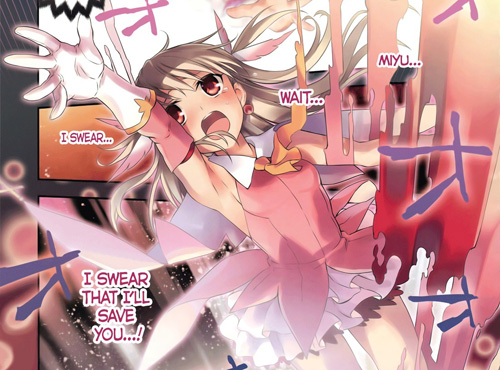 Her origin is a Fate/stay Night spinoff manga called Fate/Kaleid liner Prisma ☆ Illya where Illya becomes a magical girl who has to collect cards, sounds a bit like Cardcaptor Sakura, that reminds me that I still have this certain anime review draft, that I should finish someday. In this world Illya is living together with Kiritsugu, Irisviel and Shirou. As she is chosen by the magical stick “Ruby” things happened and Illya becomes the magical girl apprentice of Tohsaka Rin.

Judging from the first few chapters it is quite hilarious. Oh and for the non manga readers (like me) there will be an anime adaption in the upcoming summer season in a few more days.

Her haircolor is faint blonde with some subtle shading, two longer pigtails appear at the back of her hair with spread strands at the tips. The hair is decorated with cute winglets, the pink shading there is quite nice. The hairstyle is very close to the manga, overall the hair could be a bit more finer detailed but it’s still nice. Magical girl Illya has a beautiful face with big amber colored eyes and adorable blush marks. The figures has a big open mouth thats amplifies Illya’s happy and playful personality, on closer inspection an upper front teeth line has been applied.

The outfit is a tribute to more classic and cute  magical girl outfits like in Card Captor Sakura.
Her sleeveless top has a cute collar with a yellowish ribbon hanging down. The half sleeves are ending in the white gloves, at the end there is a golden rim. Further below Illya is wearing a nicely sculpted double layered skirt, the top part is light pink and a bit more solid, while the lower piece is dark and frilly, yeah and not to forget it’s short. Not, it’s the wind, the wind.

At her back  is small cape with a long, wing like shape, these wings have golden crosses at the tips. Her shoes are also equipped with winglets, they are a little different than the ones on her head. She is wearing light pink stockings with a jagged rim, there is a little distance between her legs and the jags. Of course Illya would be no real magical girl without zettai ryouiki.

The outfit radiates a lot of innocent cuteness, aside from her skirt being short and the revealed underside of her left thigh, which is a nice sight for sure. But it is not too bold for a magical girl to wear. The figure has a pastel like, subtle color theme, spiced up with a lot of interesting shading.

Illya ia a young girl with a petite body, the magical girl costume suits her very well and does a good job in amplifying her youthful charm and appearance. the slender arms are really cute. Quite som effort has been used to make her legs look attractive, the uplifted leg gives Illya some modest sex appeal. Under her cape Illya’s back is a little exposed, not as detailed as I wished, but her shoulderblades are covered by her cape anyway.

The magical stick “Ruby” looks like it’s manga counterpart gold, white and dark red. At the neck it has a nice clear part and a small golden cross can be found at the end. Getting it in place was a bit tricky, but therefor it won’t fell off too easily. Sturdiness is also a word that can be used for the connection to her base, even though Illya is only balanced on one leg, it is a stable solution.

Im enchanted by Illya’s pose where she seems to float forward in midair in an attempt to land, there is this kind of flow in the pose which is quite appealing, I really like  the articulation with her waving hand and the bend leg. The figure has an appealing fluttering appearance.

Ahh, it has been some time since my last figure review and Im all rusty this time, anyway the figure of Fate/Kaleid liner Prisma ☆ Illya turned out quite nice. Her face is beautiful and even has nice blushmarks. I like the classic magical girl outfit of this figure a lot. I like the design and flower petal like wings of her top. It’s cute, it’s short and has a cute pastel like color theme.

After Hibari Phat Company again delivered a very nice figure that overall met my expectations. Qualitywise the figure is quite clean, there are only very few seamlines if they are noticeable at all. The colors are cleanly applied and the shading is great. From a nitpicky point of view I would say that a few parts of her dress, appear a few mm thicker than they could have been made.

Of course Phat Company is not on the same level as Max Factory or ALTER but only by a few percent, they manufactur solid and pretty, quality figures. I like this certain sturdiness of Phat’s figures, I am so bold to say that their figures are more durable than products of top manufacturers.