Today I have I – 168 on review a figure based on the Kancolle browser game, the figure was made by Max Factory and released in early June 2015. I – 168 is my second Kancolle figure this year, the first one was Kongou, also a nice figure made by Max Factory.

The figure was sculpted by MimiShiki, a fresh sculptor. Like all Kancolle figures from Max Factory the scale is 1/8. I – 168 comes with a hexagon base, a swimring and two torpedos.

Many of the first Kancolle figure anouncements and releases followed the pattern of girls with massive guns. The weapons are essential aspects of the character design, but also the unique artstyle of the characters is something very appealing for me, I also like many of the Destroyer based girls. The recently announced Tatsuta and Tenryuu from QuesQ caught my interest.

I still play Kancolle, although not as dilligent as before, I have fun with it. I’m also still happy to see new figures of it announced from time to time. The anime which aired recently, did not affect the characters chosen by figure manufacturers. Well, who wants a plain Fubuki ;D

The manufacturers are quite eager to make a Shimakaze figure, this certain character already has around 6 scale figures. I would rather see figures of other cute Destroyer girls, actually.

I love the submarine girls in Kancolle a whole lot, they appear like Highschool first years, cheerful, bubbly and determined to their task. Sometimes they also are a little childish, but that is what makes them so irresistable cute. These characters also have bright, vivid colors.

Expressive faces always have been very important for me since I’ve started collecting figures, it’s something that makes figures stand out and what make them look lively. Imuya has such an adorable face with nicely printed eyes, it’s full with her surprised and flustered emotion.

I love the quite strong blushmarks and her little open mouth, that her eyes turned to the right also helps with creating her unique and cute expression.

I-168 is wearing a slightly tattered school swimsuit that represents her after receiving damage, in undamaged state the girl would wear a school uniform shirt over her school swimsuit.

With my little setting, I wanted to recreate the ocean with Imuya in open water.

The paintjob on the shiny swimsuit looks very good with shading to accentuate certain places on it. Over her already blossomed boobs is her name tag, I like the idea that all subsubmarine girls are wearing these school swimsuits as a kind of uniform.

Imuya has burgundy red hair, she is sporting a detailed ponytail hairstyle and a few larger single strands, at the tips it changes to bright blue and some transparency is used. The white ribbon resembles a marine propeller, I-168 shows real submarine spirit in every place.

The torpedos are loose parts, so you can play a little with I-168

The character has the body of a girl still in development, although she looks already great.
The pose compliments her lower legs and hipline, the body sculpting turned out amazing overall. The arched back in combination with the shiny swimsuit is pure Kryptonite.

Aside from being a dangerous submarine the figure gives a feeling of the summer season, a cute girl ready to rock the beach with a cool swimring and practical flip-flops, they look somewhat crude for a sweet girl like her, but somehow it all creates a fitting appearance.

I love how she is drifting on top of her ring, she’s so cute.

The tentacles are always a funny element in certain kinds of pictures, I hopefully didn’t went “over board” with that.

Since I’ve placed my preorder I was really looking forward to see I-168 in person, now that she’s here I’m practically overjoyed. Imuya turned out so sweet and adorable, her face and expression alone make her something special, when purchasing her you also get a nicely posed figure in a tight swimsuit and a cool base. For me the figure is an amazingly nice item. Also after a closer look, there is actually nothing bad to say. With this detailed expression, the overall technical execution on this figure, there is not much more, that I could have asked for. 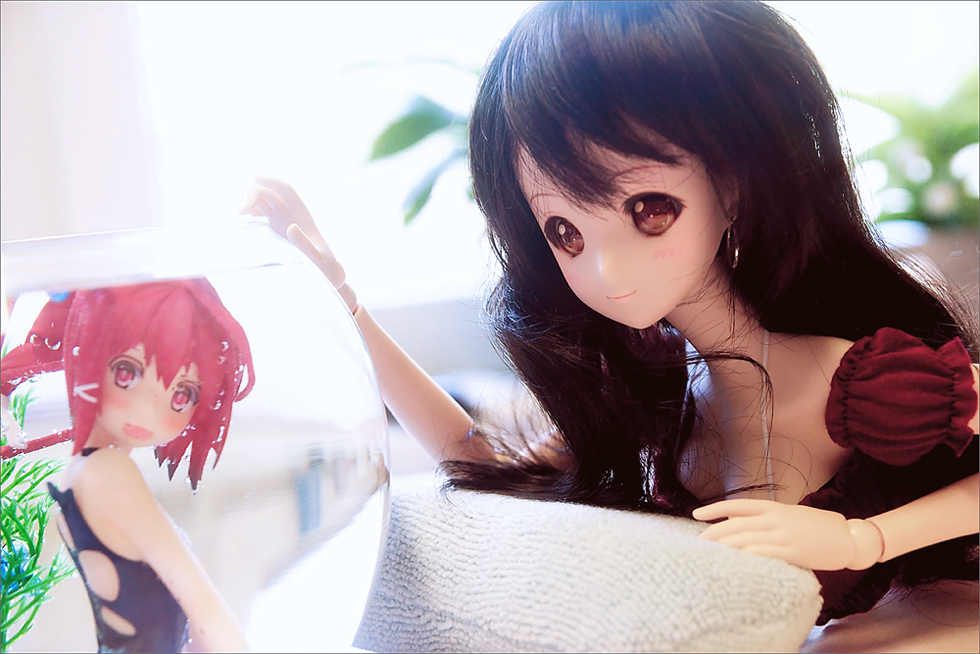 There also was a 1/4 scaled Imuya, but the small one has a much better face in my eyes.

I expect that Max Factory will showcase a painted figure of  I – 19, another submarine based character to appear on the Wonderfestival this month. I also would like to see a figure of I -8.