Mayoi Hachikuji is a character from the popular anime Bakemonogatari and in my humble opinion an awesome anime from SHAFT which I already watched two times, its great. 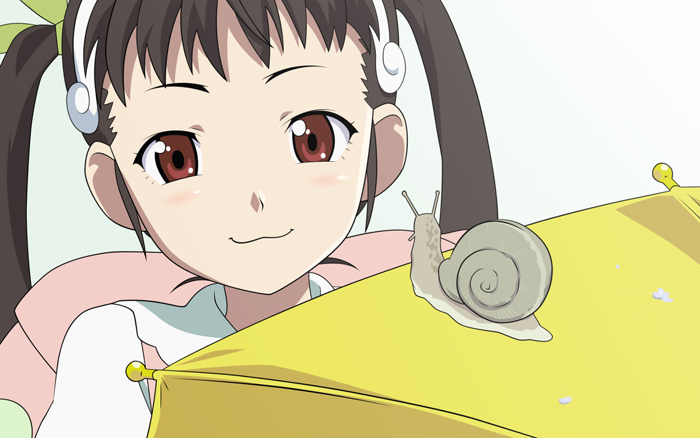 The figure is sculpted after the illustration from the opening theme of the Hachikuji story.


As Kotobukiya announced their Mayoi Hachikuji figure and showed the first prototype pictures which looked quite promising I was fired up about this figure. While the attention of the fans was mainly drawn torwards Hitagi Senjougahara, I can understand the point why she is so popular, Hitagi is attractive and has a cool personality, but I never was a big fan of her, next to Koyomi Araragi and Suruga Kanbaru, Mayoi Hachikuji was one of my favorite characters.

So here are some small background infos about her character 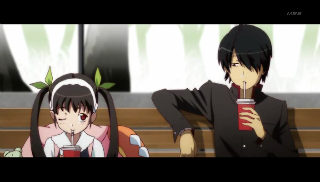 Ten years ago Mayoi was a 5th grade elementary school girl. Her parents got divorced and Mayoi lived together with her father, someday she missed her mum and went out to search for her.

In the show she was cute and funny and also acted a bit tough sometimes, her fight scenes with Koyomi were hilarious, maybe another reason why I liked her character was that I liked snails a lot in my childhood 😉 I really like how they combined the look of a cute schoolgirl and a snail with twintails as feelers, a huge backpack as snail shell and the snail like mouth.

So lets head over to the review part

On first look this figure resembles Mayoi Hachikuji very well, the twintails, her face, her body proportions as well as the look of her nice dress really look like in the anime, one exception is the color of her dress, in the anime her skirt is dark blue, but there also was an illustration of her with a wine red colored skirt on the DVD cover. I don’t know why they decided to pick the other color in the end, but if you ask me I prefer the wine red color.

In comparison with other 1/8 scaled figures Mayoi is on the bigger side, her head is huge and in fact she looks strange next to my other figures figures of that scale, she looks better when she’s placed next to 1/7 scaled figures. In general when producing a whole figure line manufacturers should pay more attention to the scale of all the figures so that they look good when placed together instead of scaling them indifferently.

The area around her nice red eyes looks pretty accurate, underneath she has light blush marks on her cheeks, what I also really like is her snail like mouth. Her hair is sculpted very nicely, with the bangs and the short sideburns her hairstyle appears very lively, the long  twintails with the twisted strands are also looking very good.

The visual trademark of Hachikuji is the big backpack at her back. The backpack has a leather like texture and shows some very good color shading. It looks nice and detailed, the white outlines are adding a nice contrast to the pink backpack. There are pockets and playful stuff on the sides which elementary school students would like 😀 . On the left side there is a patch with her class and name written on it and a paw comes out under the cover at the top.

The small details on this figure, like the star on her blouse, the cherry print on her skirt and the green transparent bracelet on her arm are nice. The white short sleeved blouse has pretty sculpted seam lines and wrinkles. Her panties are also sculpted very detailed, but I hope you understand that Im not that interested in peeking under the skirts of elementary school girls =D

If you want to take a look please visit the linked reviews at the end of this post.


Her pose appears very dynamik, like she is strolling around twinkle-toed after the school day has ended, her hands are holding the belts of her heavy backpack. The flow of the skirt is also nice to look at and fits according to her pose. Because of the angle, Mayoi is suited to be on display on higher places, she doesn’t look good from every angle because of that.

The paintjob looks very good, when you look very close some areas aren’t painted 100 % accurate,but from a normal distance this is hardly noticeable and so there isn’t much space for complains. Her base is desinged a bit simple, it is a clear round bas with a dark clear silhouette of a snail. The good news is that the base is very solid and supports the figure very well.

Initially I planned to make a shooting together with real snails but it’s winter now and the snails around here are hibernating in this season. So I had to do an indoor shooting, unfortunately the outcome of my shooting didn’t turn out like I expected, but at least some pics were useful enough for this review. I added some new pics from spring 2011 to this review.

I admit that Hachikuji doesn’t look very fancy in her outfit, in comparison with most of my other figures. I doubt that I would have ordered this figure if I had no knowledge about her origin, but nevertheless in my opinion Hachikuji is one of the more interesting school uniform figures.

Kotobukiya did a good job in putting the anime character Mayoi Hachikuji from Bakemonogatari into a good looking figure, sculpting and painting is very well done. I’m really satisfied with this figure. I paid 5,430 yen at AmiAmi so I think it was a fair deal. I would recommend this cute figure to fans of Mayoi Hachikuji and people who like girls in school uniforms, oh my god that sounds so wrong XD

other reviews of Mayoi can be found at

kaijin.akiba.coocan.jp
yotsubatofigure.net
they are only in japanese but the pictures should be enough

thx for watching see you next time 😉