Hello boys and girls today I will show you another figure in a outfit fitted for the beach.
This Misaka Mikoto figure is from the well known Beach Queens line from manufacurer Wave,her release date was in march 2011. Misaka is a 1/10 scaled figure with a height of
160 mm, surprisingly her sculptor is Hiroshi (Sakurazensen) who also made the Saber
~Iron Hammer of the Terrible King Vortigern~ figure, quite the difference XD

On first impression Misaka is a tomboyish looking character with a short temper.
She always tries to hide the fact that she likes cute things and that she is more girlish inside than most people assume, especially from other people she doesn’t know very well.
I would say she’s quite the violent tsundere character sometimes.

Misaka Mikoto made her first appearance in the anime Toaru Majutsu no Index, but the origin of  Misaka in this outfit is the spin-off anime To Aru Kagaku no Railgun episode 13. Where the cast of Railgun went to a photostudio to take part in a shooting for a swim suit catalog. The photostudio is very advanced and can create locations in a very realistic way, like the holodeck from the spaceship Enterprise. Later that afternoon Misaka sneaked into the photostudio, took the cute bikini she initially wanted to wear, created a exotic beach location in the studio and let her true self run free, but she didn’t notice a small detail.

A few month ago it would have been unthinkable that I would have bought a figure of Misaka Mikoto in fact I disliked her in Toaru Majutsu no Index, mainly for her Touma hating personality and her furious rage attacks out of nowhere. In To Aru Kagaku no Railgun I disliked her less and just in Toaru Majutsu no Index II I began to really like her, there she appeared a lot more likeable. 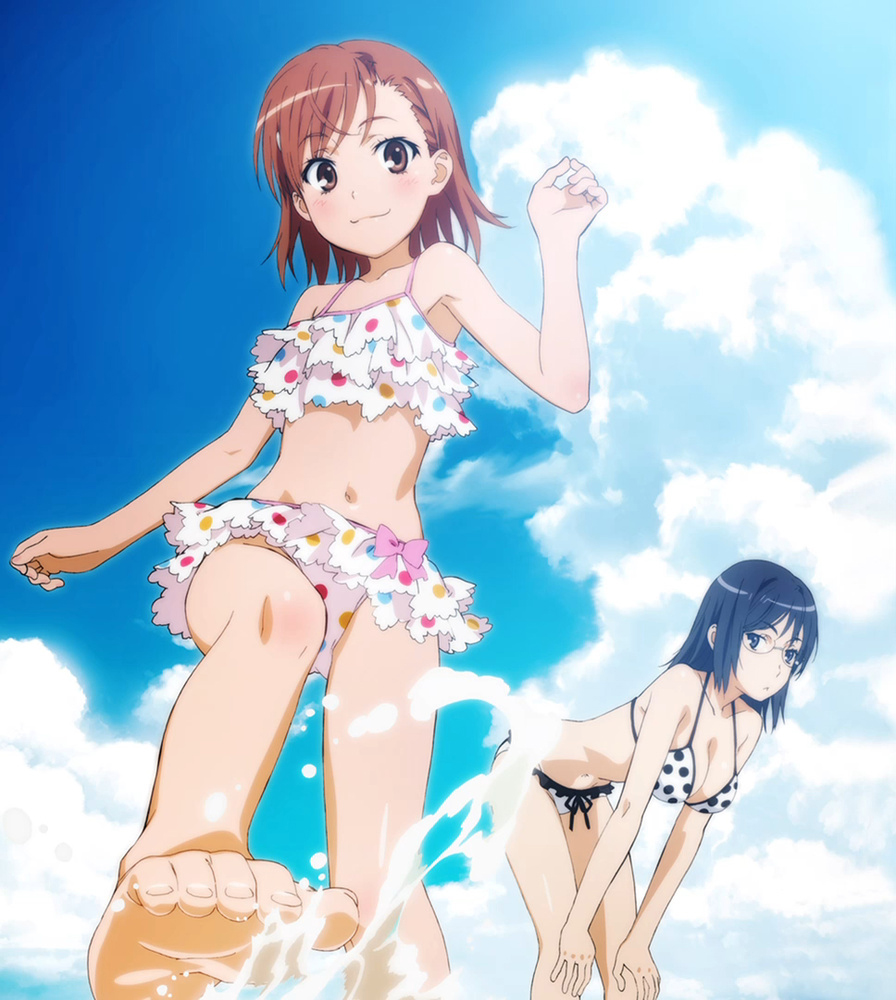 As this Misaka figure was announced I wasn’t that impressed by the official pictures of her, “unfortunately” haha ok not really unfortunately ;p MastraCustom from mfc posted a really nice picture of her so I became head over heels about Misaka and wanted to get her badly, on the big figure selling sites she was already sold out, so I’ve bought my Misaka copy on ebay.

The pose of Misaka shows her happy girl side very well, I really like how she lifts her slender arms in such a playful way, together with the lovely face expression this Misaka figure creates a very joyful atmosphere no matter where she is placed, thanks to the comic look of her origin this figure has rather big eyes and a big mouth despite her being only an 1/10 scaled figure, these characteristics are noticeable even from a distance, which leaves a good impression.

Her short hair shows a gradient effect from light too dark brown, the strands are sculpted in a very clean way. Also the flower clip on her head is a nice and cute detail. At 2 small areas is a slight scratch on the hair it is only noticeable from very close view, but they are there.
The hairstyle is limiting the moveability of her head quite a bit, because her shoulders are in the way, but the moveability is sufficent enough for playing around, this H-neck is a nice feature of these 1/10 scales figures from Wave.

Her face looks just too cute ^-^, either figures with wide open mouth look good or some kind of retarded, in case of Misaka it’s the definetely on the good side, the upper fron teeth line is a nice detail at her mouth. Eyes and mouth together create an enchanting and happy face expression. There was also was a limited Misaka with three different faces, but this standard version I’ve bought comes with two faces, the second face, shows Misaka with a “ewwwww” expression, it is really funny, but the happy face is the best for her. To change the faces you just have to take off the bangs part and pull the face out and exchange it with the other face.

This figure also has a well sculpted body, Misaka is rather tall and not what you would call well endowed, but nevertheless I think she’s a quite a pretty girl or as Kuroko might say… 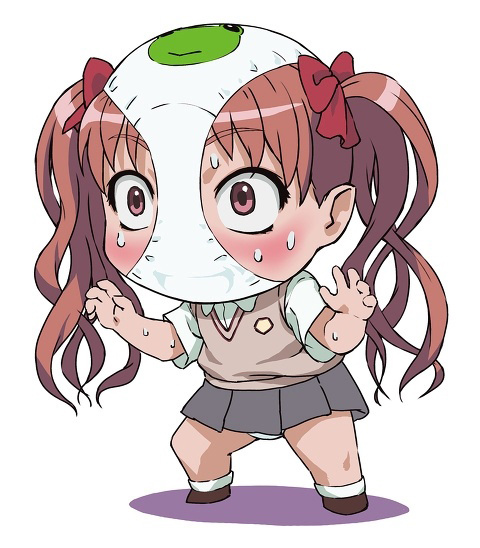 Especially her waisteline and the level of detail at her belly are really nice eyecandy. I also like her tiny hands with the thin wrists she puts into the air. Since she is a small figures, only when looking really, really close you can see seams lines at her hands and feet. On my copy there is only one more noticeable flaw, it is a small area on the left side of her waiste which looks quite bumpy. The paintjob of this figure is clean and I like her slightly tanned skincolor a lot. Even the details at her face like the eyes, the blushmarks and the mouth. Her tiny, hardly one millimeter
big finger and footnails are also painted on super close view it appears not that cleanly done.

This bikini has a very cute design, which resembles the bikini from her origin very well, as you might see it’s a light pink colored two piece bikini with frilly layers and dots on it. The production quality of it looks very good, and on top of that Misaka looks just extremely cute in it.

This Misaka is incredible cute, her big eyes together with her playful pose just melt my manly heart. Misaka is definitely one of the nicer figures from Waves Beach Queens Line, if not one of the best ones. The sculpting of her body and the bikini looks very good from nearly every angle. On the downside my Misaka figure has a small bumby looking area which I guess comes from the molding process and another things is that the pegs of her base fit a bit loose into the two holes under her feet. Without these two flaws I would have been more satisfied, but the positive sides of this figure are on the majority and so Im really happy that I’ve bought her.

Misaka can swap heads and body with other 1/10 scaled figures from Wave, here I’ve used the body of Asuka apron version. BTW my Asuka apron version is for sale, she’s in top condition, comes with all accessoires and box, just ask me if youre interested, I’ll give you a good price ^^

wet Misaka is wet ;p
So here a few additional outdoor pictures with some water. At first Misaka enjoys the warm rainshower, but as the rain turned into a rainstorm her mood suddenly changes. The camera became a bit wet here, but even after some waterdrops my camera still works it’s a Sony ;p

another review can be found here at shadonia.com and more pictures of her can be found at studiorzhobby.sakura.ne.jp

Next time I will have Orchid Seeds super sexy Super Sonico on review, see you.