The Wonderfestival 2011 Summer excibition started on 24th July 2011, unfortunately I couldn’t be there like someone else I know :p At least you can see most of the stuff which is shown there on the internet as well, without queques and scramble. I searched and checked out a few sites and blogs with pictures and infos of new figures and prototypes the whole morning.

I found many nice and promising figures, lets start with the manufacturers in alphabetical order.

Aegis from the game Persona 3 Portable in the Aegis – ART WORKS Version, she will be scaled 1/6 , her release is sheduled for fall 2011. I don’t think I will order her, but she looks quite pretty.

Charlotte Dunois from Infinite Stratos, I’ve never seen the anime but the pose and the outfit give her a very cute appearance, she will have  two exchangeable faces/hairstyles and is scaled 1/8. Charlotte Dunois  realease is planned for 2012

This Nanoha – holiday version figure is scaled 1/7 and shows her in adult from the Mahou Shoujo Lyrical Nanoha StrikerS anime, I like the outfit with the jacket and bikini and the laid back look of her pose. Also the flow of her hair looks great, her release is also planned for 2012.

I couldn’t believe my eyes as I saw that both Megahouse and ALTER had  very pretty Merry Nightmare figures at their booths. The anime adaption of Yumekui Merry was far away from perfect, but Merry was always a character I liked and I loved her white visual key related outfit. I like both versions so far, I would like to see them colored soon so that I can decide.

Hinako from the Bathtime with Hinako & Hiyoko Ova. Mhhh haha oh well what should I say. I think this chubby girl has nice curves and is overall very cute in her soapy bathroom dress. Additional to that her pose looks so lively, she is scaled 1/7 and will be released this year. ecchi ecchi ;D

Gift’s realisation of a Super Soniko figure, she is scaled 1/6 at first I was fired up to get her, but I think I’ll pass here, it’s not the way I want to see her character and the enchained arm would make me feel sorry for her everytime I look at her. Gift made a nice sculpting and a pretty base but for me the whole message of this figure is just too much for me.

This 2nd Soniko from Gift, is the Super Soniko – Summer Version, this figure is scaled 1/8 and wears a scanty beach outfit, there was a GK of her in the past and now it was turned into a PVC. If I’d like her face in the final product, the possibilty that I’ll order her is very high

Saber from the upcoming Fate/Zero anime comes with a damn motobike how cool is that?! Saber will be scaled 1/7, she is sheduled for 2012. That is such a promising prototype, well done 😉

What made me really happy was this Millhiore F. Biscotti figure from the anime Dog Days, I wished for it and GSC delivered her in the long princess outfit, I would have preferredMilhi in the short princess dress or singer dress, but I’m happy that she’ll made anyway. Her face is just *hnnng*. She will be released in December 2011, I’ll order her for sure.

There will also be a Millhiore F. Biscotti Nendoroid with her big bird Harlan, both look extremely cute, but I don’t think I will order these two, even though they are super adorable. So far there was no release date announced for this Nendoroid.

Who needs Hachikuji Mayoi, Oshino Shinobu from Bakemonogatari is made of pure cuteness 🙂 There was madeca GK of her from the lovely illustration where she sits on a mountain of donuts and now Im happy that she will be availabe as completed 1/8 scaled PVC. She’s so cute !ordered!

It seems GSC that has high goals this time and they also showed a great Makise Kurisu prototype in a dynamic running pose. Makise Kurisu is from Steins;Gate and the figure will be scaled in 1/8.

Last Wonfes Arsene from the anime Tantei Opera Milky Holmes was still an uncolored prototype, but now she is a fully painted 1/8 scaled beauty, I probably won’t buy her, but it makes me happy that they’ve put so much love into a side character, she’s hot and her outfit looks fantastic.

Honestly speaking aside from Madoka and Sayaka I found GSC’s Puella Magi Madoka Magica prototypes well sculpted but rather boring. Anyway I like the 1/8 scaled Madoka in her pretty and classical magical girl outfit and the girly running pose is really nice. They also did a good job in putting her 2d face from the anime into a super cute face , for me she is a very appealing figure.

I like Nanoha nearly as much as Soniko XD Here is the young Nanoha from the Mahou Shoujo Lyrical Nanoha The Movie 1st movie in an 1/8 scale. She is in her school uniform, obviously she overslept and is in a hurry to go to school. She has a very cute face with a bread in her mouth.

The second 1/8 scaled Gokou Ruri figure from Kotobukiya turned out very well, she looks awesome in her casual dress and this pose which shows a lot of her personality looks fantastic, *damn* she even has cat ears. The anime Ore no Imouto ga Konna ni Kawaii Wake ga Nai was not my thing but at least she was a character I liked. Her release date is in November 2011. 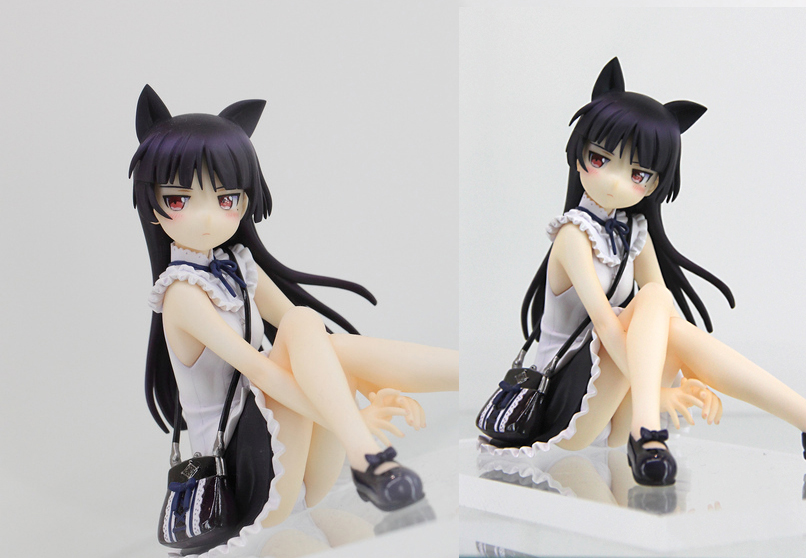 From Muv-Luv Alternative Total Eclipse Kotobukiya showed a figure of the popular character Takamura Yui in an 1/7 scale. She has a beautiful loose fit kimono and has an ancient japanese umbrella. Her release is planned for the years 2012. Judging from the sculpor this figure will probably turn out very pretty.

luth pointed my nose at this Elfriede figure she is from Native’s Creators Collection and will be made in a 1/7 scale, surprisingly she seems to wear panties unlike many other Native figures XP.
I guess I won’t order her, but the pose and the wrinkles of her outfit look very interesting.

Another Soniko figure ole ole! Here we a have Soniko – bath time version, how shes steps out of her bathtub. This could a figure from Native I would like to buy if I like her painted face and Natice would not put too much details at her *meow* area nor add another kinky detail to this figure.

Sandaime Muramasa from Soukou Akki Muramasa is a beautiful maid/waitress  figure from Max Factory. Her face is pretty and the pose emits something like gracefulness to me. She is scaled 1/7, her release is planned for December 2011. I’ll probably order her, because I really like beautiful figures in this kind of dressup. Also her darker skincolor might be an interesting detail.

I don’t feel much for Hatsune figures by default, but I like the more unusual designs of her like the 1/7 scaled Hatsune Miku HSP Version. Her more chibified head is a nice detail as well as the pose. I guess I would cancel my lat Miku version for this more creative looking Miku figure.

Finally here they are, the 1/8 scaled Se:Kirara figures, Shizuno Izumi will be released next year 2012, this lovely girl wears something like a school uniform/ lingerine outfit, maybe its castoffable haha 😀 I like her, but maybe I’ll wait for a figure of Akiyama Nozomi.

Last Wonfes Max Factory had this Asuka with the cool and interesting face expression up their sleeves, I like this 1/6 scaled Asuka – Test Plug Suit Version and now she’ll be released in November 2011 YEAH! I will probably order her, the pose and the hairstyle are just too nice.

I couldn’t believe my eyes as I saw what Megahouse had at their booth, a good looking Merry Nightmare figure ^-^. The anime adaption of Yumekui Merry was far away from perfect, but Merry was always a character I liked and I loved her white visual key related outfit it is so stylish.

In my last Soniko – Babydoll version review I’ve mentioned that I would love to buy a Soniko figure with a happy face expression, and what I saw at the Orchid Seed booth nearly made my eyes wet. They announced a 1/7 scaled figure from one of my favorite outfits of Soniko.
Soniko looks so cute and happy there. ! how awesome ! Please hurry Orchid Seed.

Orchid Seed made a different color version for their Soniko – Bondage version which was released a few month ago. She looks so cute in this colorful outfit I wouldn’t have expected white and light blue suit her so nicely and her blushmarks seem to be more prominent.

Orchid Seed also had chibi figures at their booth called Super Sonico Collection x Mota, I want the one with the guitar, but so far there wasn’t much info or a release date mentioned for this set.

I could have listed a few more figures I liked, but I think this selection is enough, overall I think that this Wonderfestival of summer 2011 was very good, there were a lot of great looking figures and prototypes, more than last Wonfes. I guess I will order 3 or 4 or a few more figures from the one I’ve listed here. Thx to all the companies, Im glad to see that you use your gains for creating creative and interesting new figures every year.

Have you seen a few figures at this Wonfes that you would like to add to your collection?