It has been a while since my last preorder post, I haven’t ordered as much as in previous years, because I became really picky and honestly the latest figure prices don’t allow it to order everything I like. Since the last post, another thing are these damn delays, they already happen so often that it makes the expenses each month unpredictable.

Since I ordered a number of rather fanservice centered and expensive figures this year, I planned to focus more on the casual figures that are offered. This post slowly shows that change.

Kashima is of course a very pretty character in the Kancolle game, having a training cruiser as her base. I was really impressed by the elaborate look of the prototype, the figure looks amazingly pretty with her sweet face, the especially nice curves and fashionable uniform. The skirt is of ridicoulusly short length, but reveals Kashima’s wonderful legs.

Kashima is a sad example for the exploitation of fictional pop culture characters, a friend once showed me a four panel manga about that featuring Kashima, after realizing the bigger picure behind it, it made me feel quite sad and guilty.
I will talk about this in detail when I will review this  figure. To protect her dignity a little, I ordered this figure. 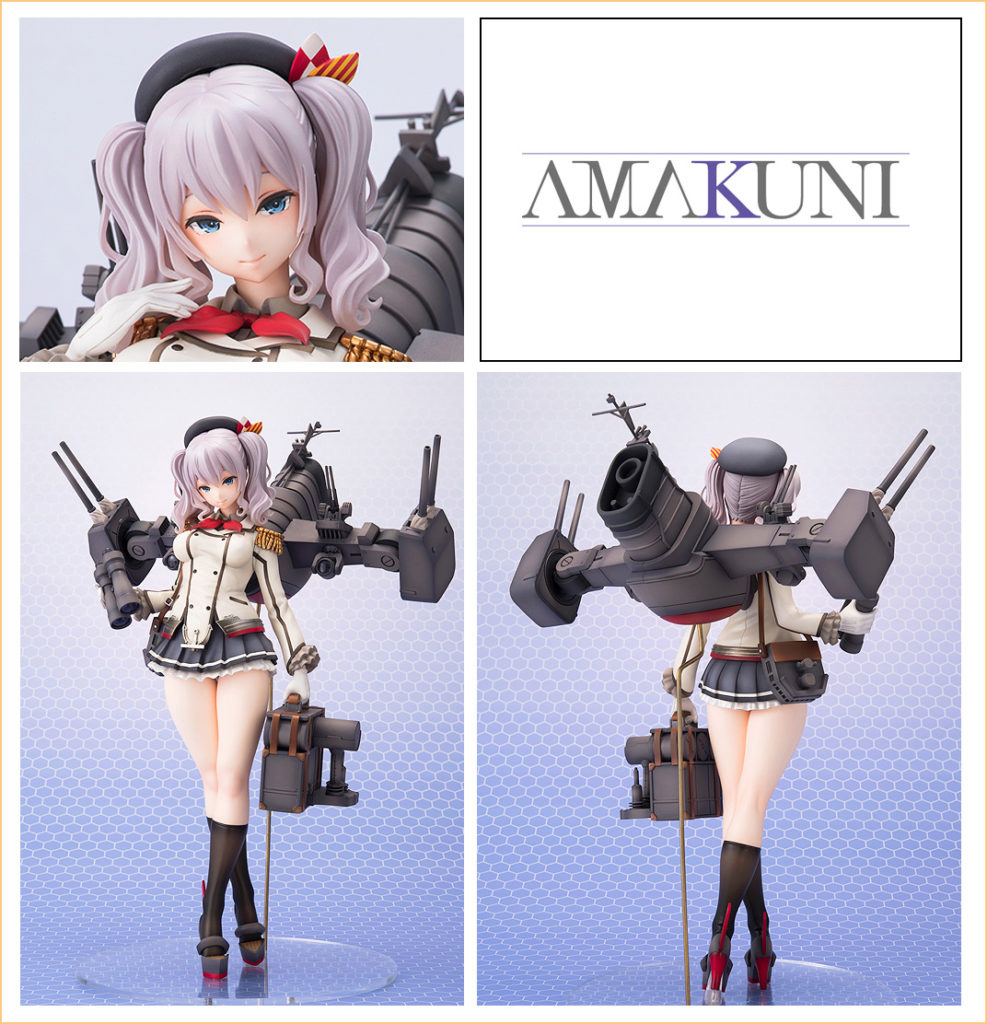 I’m not really a fan of Miku, but I also don’t dislike her, I liked a few of her figures in the past. The best aspect of the Miku 2016 racing version for me is the cute and colorful concept. Her outfit looks less futuristic compared to other “racing versions” here she is dressed as nearly normal grid girl sitting on a pile of tyres. The addition of red, orange and yelllow colors make this figure look very happy. Also her face looks very adorable and portrays Miku in a happy mood. 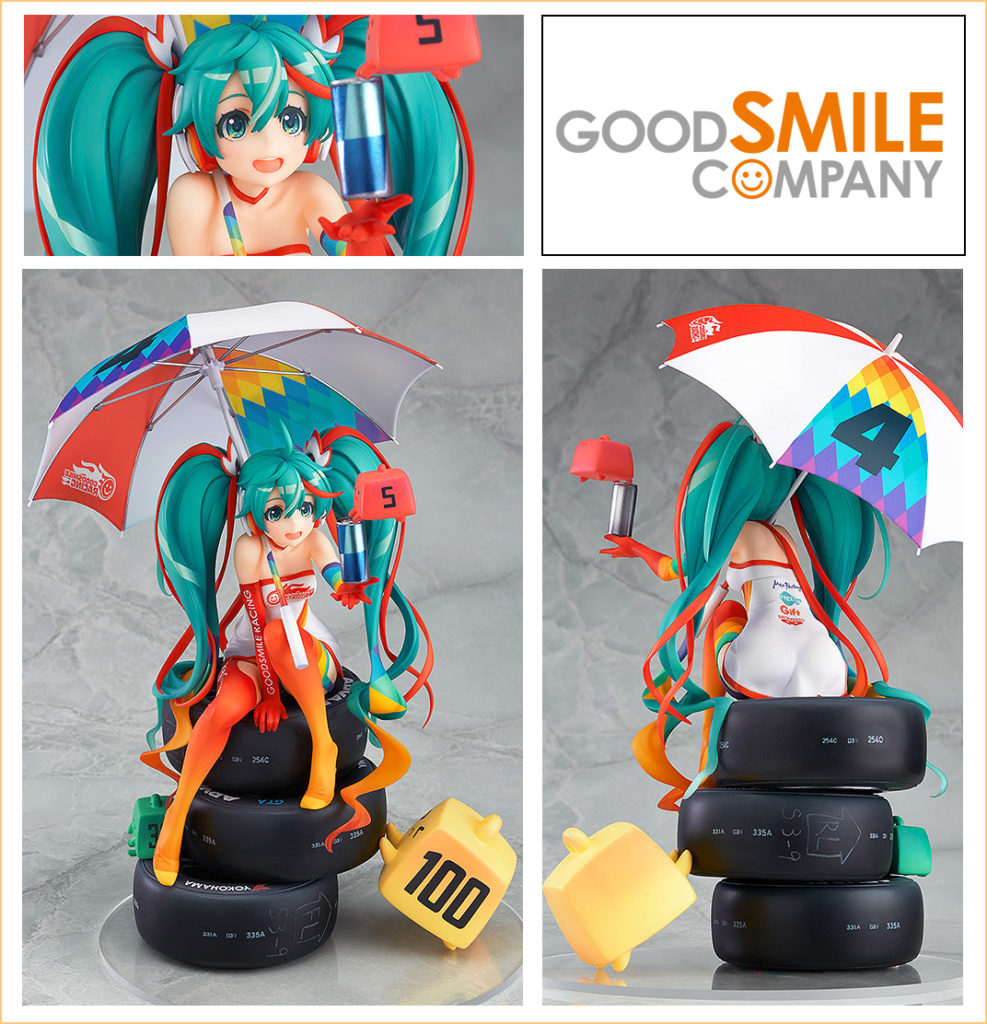 The guns on the Kancolle figures never were of much interest for me, I always was more interested in the character design, I actually thought that it would be nice to have the lovely characters dressed as normal girls. You probably can imagine how happy I was when GSC announced this figure. On top of that Shigure is one of my favorite characters from Kancolle. This is an amazingly pretty figure dressed in an outfit suited for autumm. The red glasses are a nice addition, as well as the vintage camera. The figure is nicely articulated, being placed on a fence with a leaf covered base. 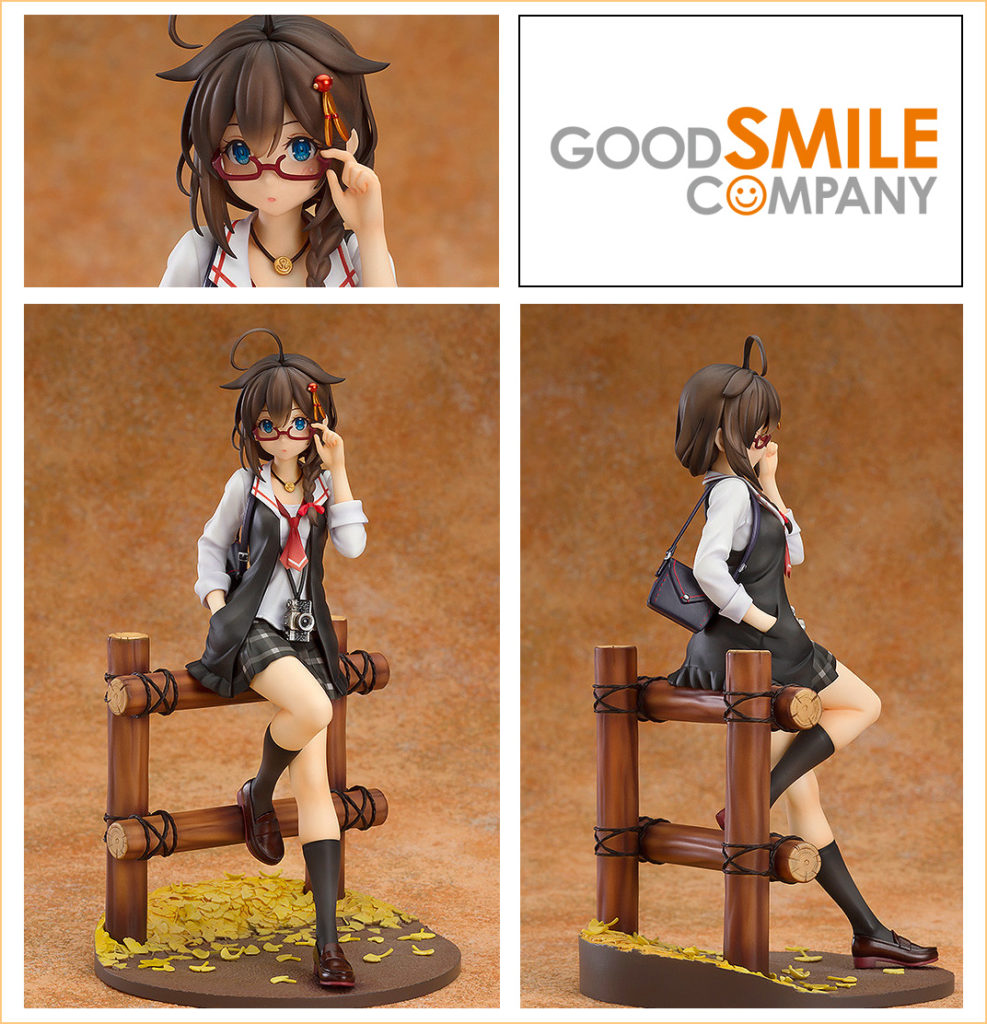 Fortunately, I really like the new School Idol Festival version of her, where she wears this lovely outfit that is as cute, fluffy and soft as Hanayo herself.  It’s an appealing design with lots of frill, the pastel colors are based on a cherry blossom. Hanayo’s expression is beaming with delight, the eyes make her appear slightly drunk, but that is really cute in my opinion. While rewatching the first 2 Love Live! seasons, I noticed again what a nice anime it was, it explored the themes of camaraderie and hard work with a cast of 9 unique and charming girls in such a great and entertaining way. 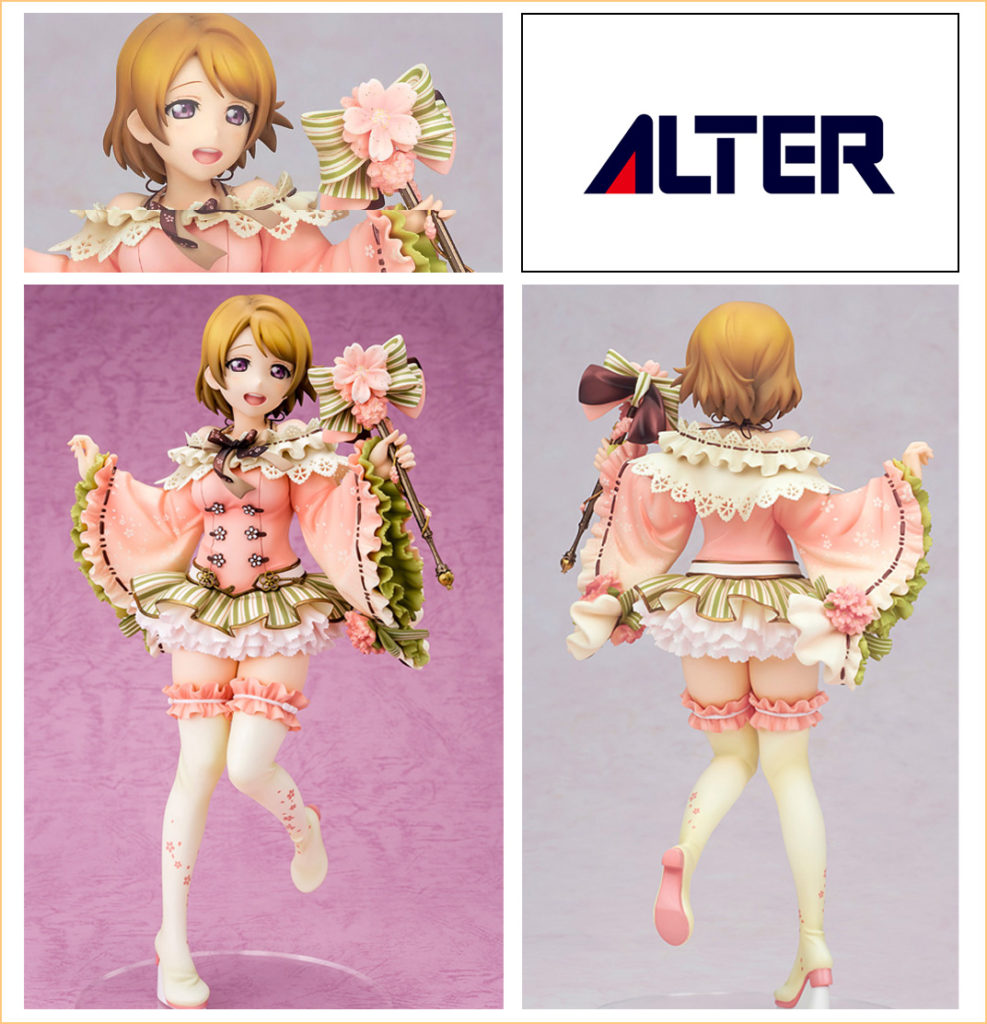 Yes, a Nendoroid. Of course I would like to have scale figures from Little Witch Academia, since I really liked this hilariously crazy anime. The unnecesary final arc aside, ït has been a while that I liked an anime that much. I chose the character of Sucy because I like her the most, her sarcastic remarks and Schadenfreude about Akko’s adversities.

I recently noticed this nice figure of a charming cat girl playing the guitar. Cyan already was released. Since a few delays occured I have available budget o get another figure this or next month, Cyan would be something I’d like to have.

I never watched Date A Live to be honest, but this concept of Kurumi as an attractive girl posing on a big cat tree.

Manufacturer Broccoli decided to make an extremely complex figure adaption of Narmaya, a quite awesome figure with an awesome base. As to be expected it also is a really expensive figure. Could someone please make a figure of Lyria?

Awww I really like this figure of Izumi with the Super Soaker gun, it might not be state of the art quality, but even with a few cutbacks this figure would be really lively and adorable.

Haha, earlier I’ve mentioned that I planned to buy less ecchi figures and then they show me something like this beautiful purple haired girl in a bikini XD Well, she should be released next month, one more sexy figure in 2017 won’t hurt anymore anyway lol. Mika looks really cute with her short, curvy body and the extremely adorable expression. Furthermore she is scaled 1/5 which is pretty big.

Seeing ALTER going crazy with their prices for the Cinderella Girls, GSC shows us with this beautiful Anastasia, that they can make a gorgeous figure also for an affordble price. The figures costume looks beautiful and Anastasia is also posed in a dynamic way.

Is the order a rabbit?? – Cocoa

Manufacturer PLUM is focusing on figures of loli characters and apparently does a good job with it. I recently saw this super cute Cocoa san, she was my favorite character in the fluffy anime “Is the order a rabbit??”. They made her so adorable, I really consider to get her. I would like a to have an extremely cute figure again after a while.

The Raita proportions are quite a challenge for the idol outfit, the boobs are too big and the skirt is too short. Nevertheless what I like about it, is the nicely designed and creative idol outfit and the characters pretty face.

In the IDOLM@STER anime (2011) Haruka really was my favorite, unlike this terrible Miki XD Ok first I think that is a great figure, I’ve heard a few people complain about the figures eyes being too far apart, nevertheless the figure is already sold out on AmiAmi. I think she is cute, I only feel a little sad about the fact that every figure of Haruka has a wide open mouth.

I really like the Elf archetype, pointy ears are pretty. Unfortunately in terms of figures Elves are rarely seen. Magic Bullets recently announced their “White Elf” based on an illustration of yapo. I like the pose and figures design a lot.

This certainly very pretty figure has a quite different look and atmosphere than the happy, colorful or ecchi figures we see all the time. One of the reason could be that it’s adapted from an anime produced by an chinese studio. 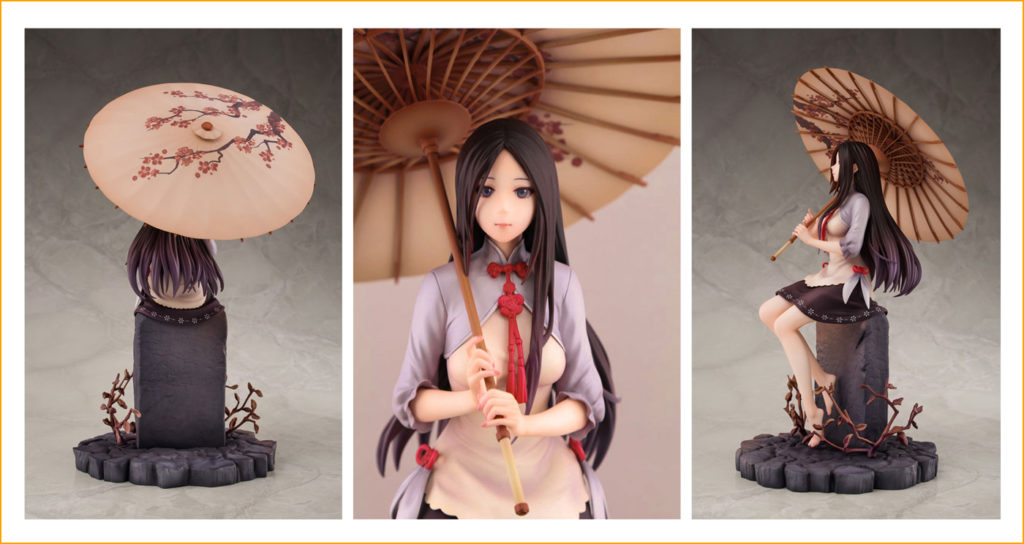 I like Ooyodo for being a modest ship girl from Kancolle, she has a cute uniform and just shows a minimum of her apparently nice legs. Amakuni really makes all the beautiful Kancolle figures and Ooyodo is no exception. 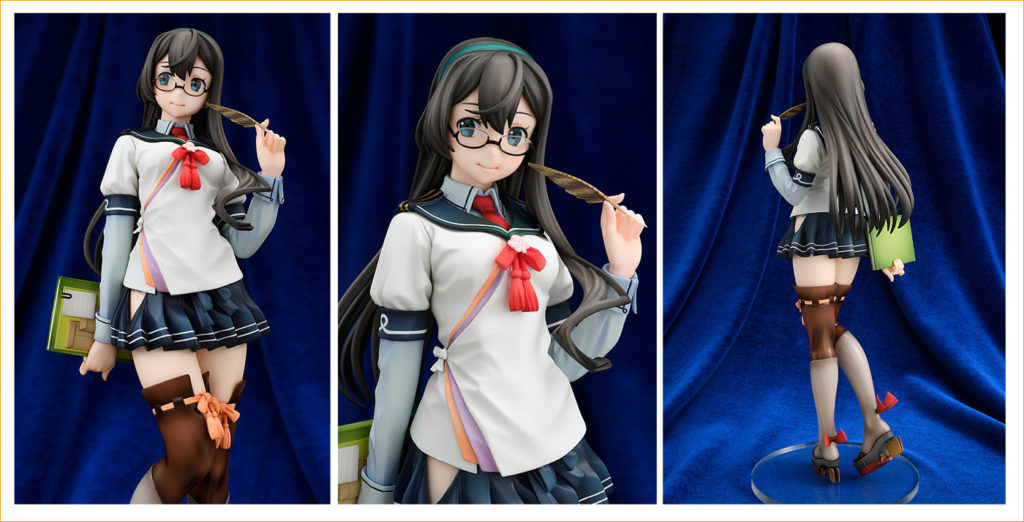 And so my personal overview about the current preorder situation comes to an end, unfortunately it’s difficult to decide to preorder anything, since many figures are appealing and pretty. Haha and most of all I have limited space and budget. How do you actually cope with the pretty figure avalanche?