Hi everybody, honestly because of personal reasons I actually feel too depressed to write a new post today, but I better do something than sitting lonely and sad in a corner.

Anyway I ordered enough stuff again to make a decent New Preorder post, not really outstanding or sexy figures this time, but things I really want as well as some goodies.

Lets start with a last minute preorder of mine Kotobuki Tsumugi 1/7 Waitress Version made by Max Factory, I just noticed how pretty this figure was one week before her release date, I really gave it a lot of thought if I should order or pass on this figure, to make things short as the in stock counter was down to 4 items I pushed the order button. I always wanted a figure dressed in a waitress outfit (waitress>maid), maybe I had prefered a sexier one ;p Nevertheless Mugi-chan looks like a very nice and well made figure and she’s also a bit sexy with her stockings.

I actually planned to buy GSC’s Suruga Kanbaru as bargain bin figure, but I’ve waited too long and she is sold out by now, even though I checked her in stock status 3 times a week.
To experience not another sold out desaster like that, I’ve finally ordered this cute Nymph from Sora no Otoshimono, she is scaled 1/6 and made by Kotobukiya. I liked Nymph in the second Season of Sora no Otoshimono and as this figure of her was announced I was hooked up, but just ordered her yesterday. Nymph is big, cute and comes with a cushion base, the shoulder armor and cape can be removed, I hope the choker comes off somehow as well.
Im really looking forward to get my first 1/6 scaled figure ^-^

In August I will get the Hachikuji Mayoi figma made by Max Factory I really like the character of Mayoi and this figma of her looks just adorable in the preview pictures her faces are just too cute. It’s also nice that they scaled her considering her age in the Bakemonogatari anime, so she’ll just measure cute 120mm ^-^. She comes with some nice accessoires like the backpack, an umbrella and a shift body in other words an additional body part for the kneeing pose. 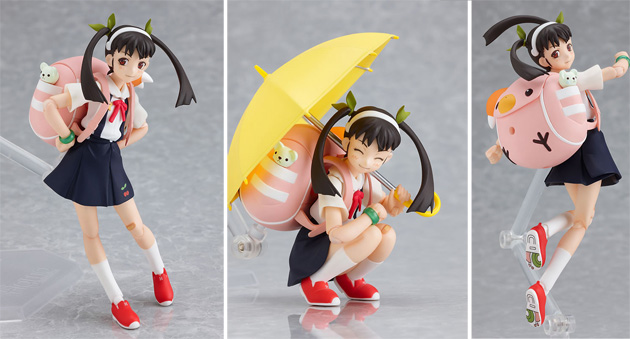 My only preorder for October so far is the Hirasawa Yui “Windmill” PM figure made by Sega, two years ago I never considered to buy a single figure from Sega, but this year I noticed that they improved and are now capable of making nice figures in a quite good quality for a good price, of course I’ts not the same quality Alter or GSC has. Anyway, what I like about this Yui figure is her outfit with the HTT t-shirt the cute face expression and the very dynamic “Rock n Roll” pose. Unfortunately this figure was only available at Toyslogic, so far. Haha I’ve just noticed that I have two K-on! figures on preorder. I guess I prefer them in different outfits than in their uniforms.

This time I also ordered other otaku culture related stuff, since it was cheap :P. So the small things at first, A little Dakimakura strap with Saten and Uiharu illustrated on it. it is 37mm wide and 100mm long. I mainly bought this out of curiosity and cause I like cute illustration, there were also Dakimakura straps with Misaka or Kuroko on it available, but they were a bit too bold ^^.

The Daiichi Uchu Sokudo CD with the BLUE STAR song, unfortunately the CD with the Superorbital song of Super Soniko which I really like, was sold out, too bad :(.
Well at least the cover of the CD I’ve ordered is nicer. 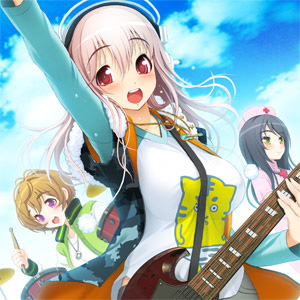 there are some nice extra goodies included. After I’ve watched some ads about it as research for my latest figure review, I was very tempted to buy this Game. It sounds like fun and from the things I’ve read about the game should be more on the romance side than “H” side.

Im confident about being able to play and understand most of the game with the help of Agth text extractor and an online translater like I did before with another japanese game, my motivation is very high. if it somehow won’t work the box of the game would still look good on a shelf I guess. I hope they won’t choose a too daring box cover for it, or Im screwed if someone finds out XD

Here’s my latest figure order roadmap, with all the orders that will arrive in the next few months. 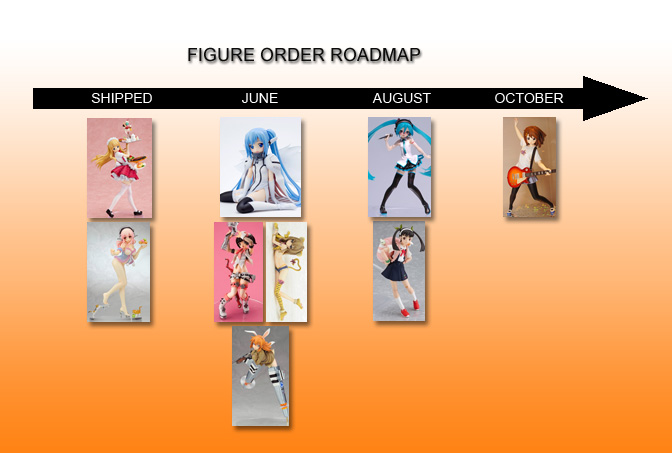