Today I will have my 25th figure review post and it will center around one of my latest purchased figures, which is called Chris 2009 Santa Version. Chris was manufactured by Beagle, the release date was in December 2009. This figure is sculpted after an illustration from the artworks of Range Murata. 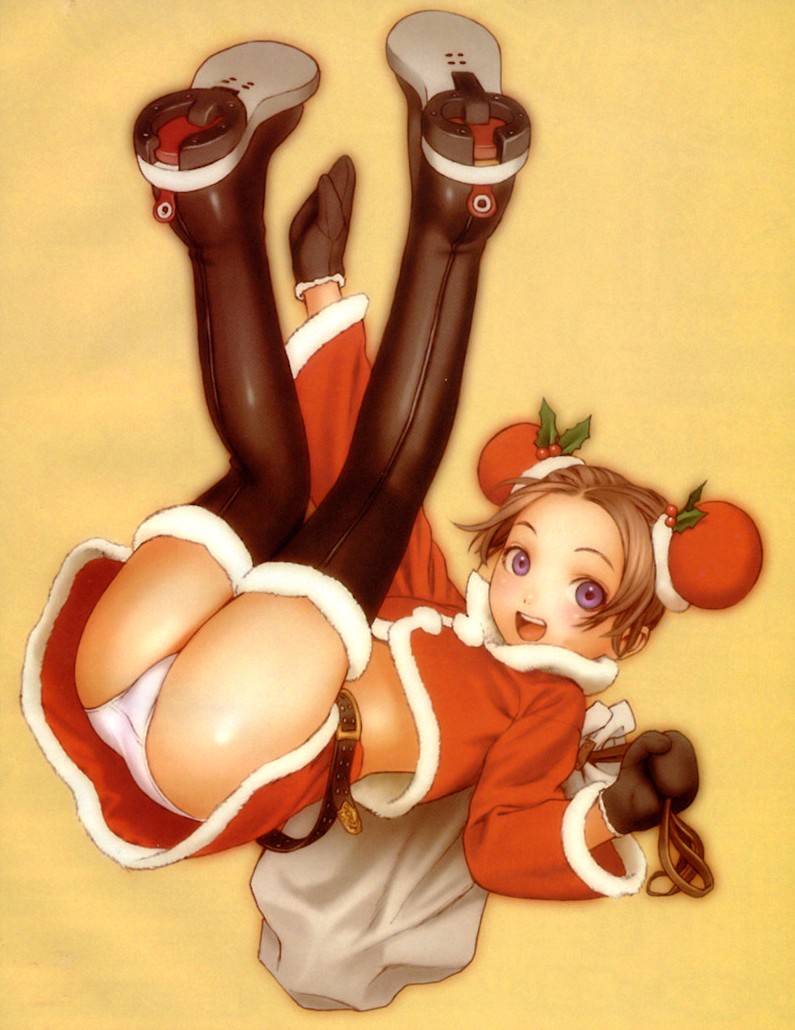 Chris 2009 Santa Version  is scaled 1/7 and her height is about 200 mm. This figure caught my attention before, but her price was too high, as far as I know she normally costs around 100 USD fortunately HobbyLink Japan had her in stock for a great 30% discount some weeks ago.

Together with UJ-14 she is my second figure  from Beagle, they mainly produce figures from Pse Collection, these are figures which have their origin in illustrations of Range Murata.

Overall there were 3 versions of this figure: the original version from 2008, a different color version from 2008 and the version I own. I liked this grey colored clothes a lot so I have no regrets that I wasn’t able to get the red origional version.

Lets take a closer look from the top to the bottom of Chris 2009 Santa Version.

Chris appears like a pretty and cute young girl that likes to deliver packages. On first look it seems like she only could be displayed in the cold season in christmas, but she wears a short cutted outfit, so I think I won’t have to  put her back into the  box because it’s summer.

The hair has a nice natural looking color tone and looks nicely sculpted as well. Chris has a center part short cut hairstyle, the things which were used 1:1 from the original figure are the red “hairbags” at the sides of her head, I don’t know the word for it, but they look really cute.

The mistletoe leafs and berries at these “hairbags” are sculpted very fine and detailed. In her very cute face are all the elements Range Murata uses when he illustrates younger girls, strong eyesbrows, a round face and big oval eyes and the face of Chris also shows a lot of her forehead because the bangs of her hair are pushed to the outsides. She also has a big and happy open mouth with the upper front teeth line showing up.

As you can see she wears a outfit that reminds of the cold season and christmas holidays.

Well a short jacket and a short skirt is not really useful in the cold season, but it shows some more of her skin which let the figure appear a bit more appealing.Her outfit is mainly colored in light grey, but there are darker grey, fur like looking outlines at the edges, all the nicely sculpted crinkles and seam lines give her outfit an quite realistic look.

The pose Chris has is creative and dynamic, it looks like she bravely jumps out of the reeindeer sleigh which hovers in the sky to bring the things inside her sack to the good and less good people in the world, well in my imagination. Because of her pose her pink and white striped panties are clearly visible. I don’t know if it’s just me, but to me it appears not very indecent, in her overall appearance Chris still keeps a very cute, happy and innocent aura.

At her hands she wears cute, white and glossy mittens, with one mitten she holds the rope of the dark grey sack, when looking at it you can see the nicely and clearly sculpted silhouette of the implied boxes inside.

What I really like about her outfit are the high boots, they look awesome with the cool and nice design and a glossy finish, the soles under her boots are showing a fancy design.

The base is a nice, transparent, rectangular cube with some sprayed on snowflakes. Inside this cube is a snow like surface at the bottom with a sad looking snowman on it.

Assembling was very easy; two pegs, two holes *plop* and everything is done 😉 .

Some words about the quality of this figure
I can’t really find a thing about this figure I could complain about, the sculpting is done very clean and accurate the same goes for the paintjob, there is no overpainting or parts at this figure where color is missing or shows scratches. Im feeling convinced in saying this, because many figures from Beagle have quite high average ratings on the MFC site.

So at last some final words about my Beagle’s Chris 2009 Santa Version.

I’m very satisfied with the quality and look of this figure, Im really happy that I noticed
the discount campaign at HobbyLink Japan and was able to get her for the cheap price.
The dynamic pose with the legs straight in the air is cute and funny.

Her outfit has some small and nice details, like the crinkles, the colorful parts at her head and the soles of her boots, Chris also has a nice and appealing color mix. The light grey outfit, the pale skin color and the brown hair color are fitting together very well. Additional to that the usage of glossy ,less shiny and matte colortones let the figure appear very livey.