I decided to get rid of my 9 older Drafts in these next months, Sunabouzu is the first to be published. I found it as I was searching for a “new” finished anime to watch, then a certain cover caught my interest, it was the one from Sunabouzu (Desert Punk). It is an 24 episode long post–apocalyptic sci fi anime, which was produced by Gonzo and aired from 2004 to 2005.

This anime takes place in a distant future where most of Japan turned into a desert, the story is set in the great Kantou desert. The previous civilization with all it’s high technology and social advances perished due to an unknown event, the current civilization uses and copy the things they find through excavations, like weapons and other mainly martial equipment. It’s a simple and tough life, yet It is not the stone age, but a big step backwards from the life we know. 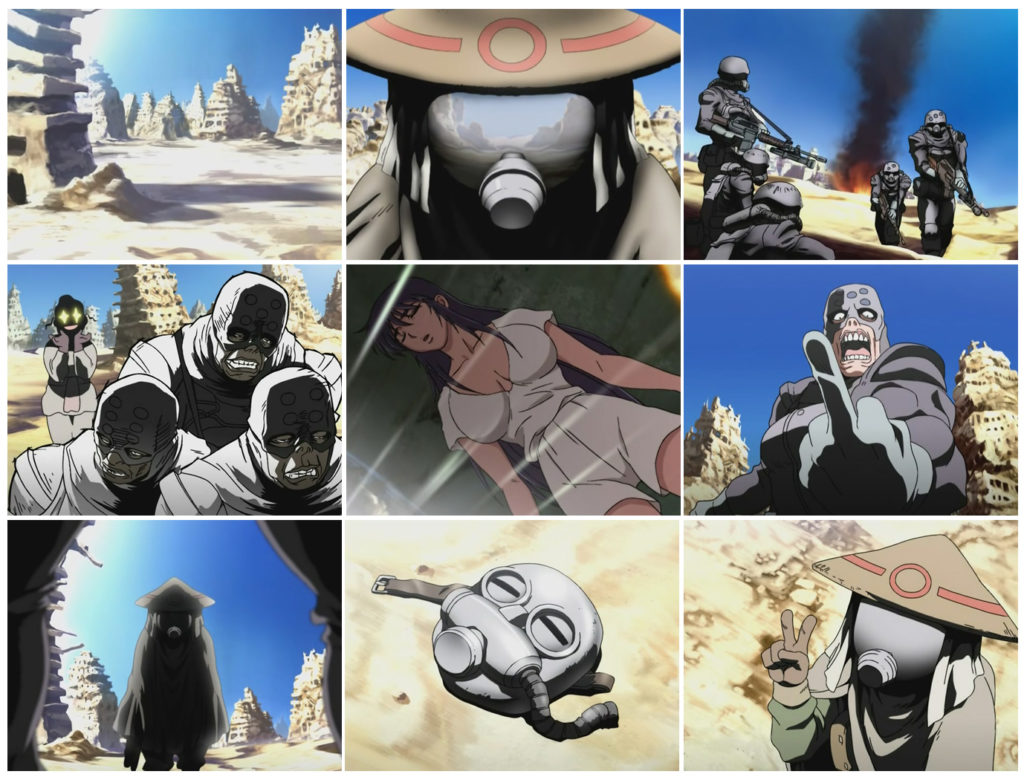 There is a government in the Kantou desert who keeps a basic order in the area, but they can’t and don’t intend to give much support for their citizens who are spread all around the desert. The government forces are mainly present in the several oasis in the Kantou area where the people have a better life. The life of the people is quite tough, they have to make a living somehow to survive in the hostile environment of an empty desert. While many inhabitants of the desert lead an more or less honest life, there are many who make a living as criminals.

These difficult circumstances and shortages on water, food and money fuel the bad characteristics of the human nature, everybody is interested in his own advantage without considering the needs of others, there is no place for the famous Japanese politeness or much kindness, the people who are living there are portrayed in a believable way, the tough living turned them into selfish persons, even though there are times where a spark of kindness is ignited. You have to know that these people aren’t evil monsters by default, it are the extreme circumstances that forces them to selfish, greedy and sometimes violent behavior. 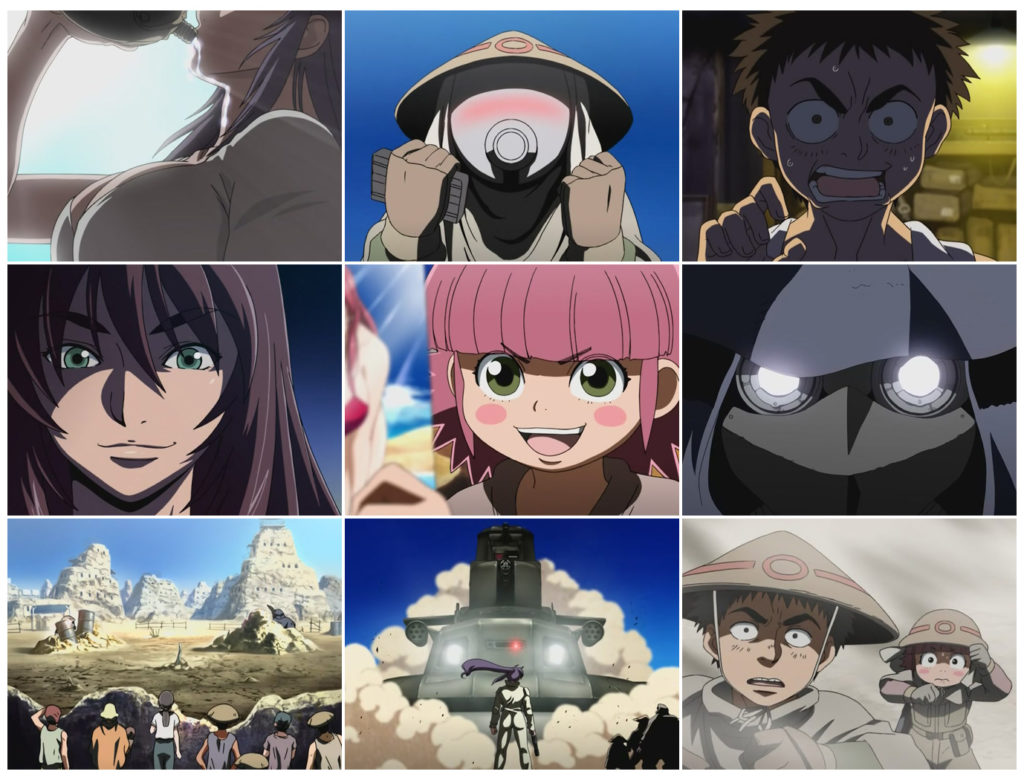 One the most remarkable aspects of  Sunabouzu is it’s main character with all these wimpy and soft main characters of today’s anime, the contrast couldn’t be much greater. The name of the lead character is Kanta, a young man of short height who works as handymen, someone who does everything for money. bounty hunter, bodyguard and other tasks are parts of his work.

He has several gadgets and underhanded tricks to fulfill his jobs, he’s nearly as good as Batman. Kanta became quite popular and has a legendary fame as the Sunabouzu. Kanta is very smart and loyal to his paying customers, but aside from that he is a real ass, greedy, short tempered and perverted are the nicest words to describe his character. Woman with big boobs are one of his weaknesses and he is often tricked with the female charm and bouncy physical attributes. 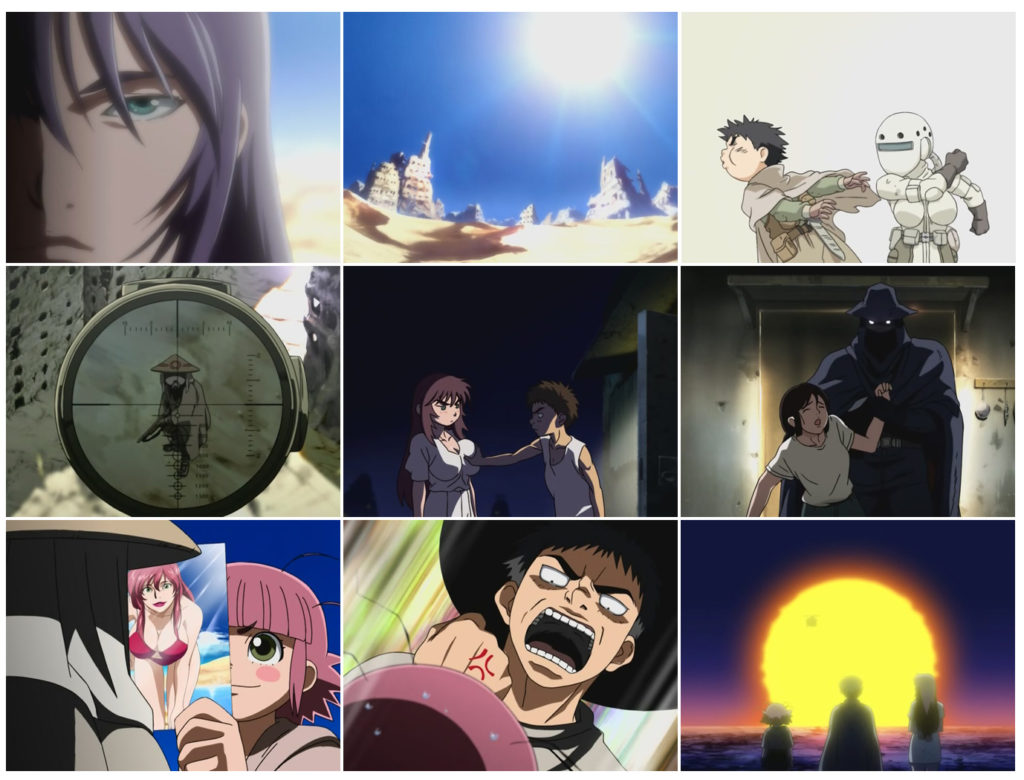 In the first quarter the viewer is introduced to the world Kanta lives in, while following him on his mainly amusing, yet crass adventures in the desert. He randomly meets old acquaintances when doing his jobs, be it as competition or partners for a certain job. The reappearing side characters are quite likable even when they sometimes act morally questionable and get in the way of the main character. Especially Amagumo is a hilarious guy, he’s the arch rival of Kanta.

Later Kanta meets the second main character, Taiko. She’s a small girl who admires the skills of Sunabouzu, after she followed him around Kanta unwillingly agrees to her wish of becoming his students. Well, she actually tricked him by making use of his only weakness. Kanta treats her quite poorly at first, cause she really isn’t very skilled and more of a burden than anything else. 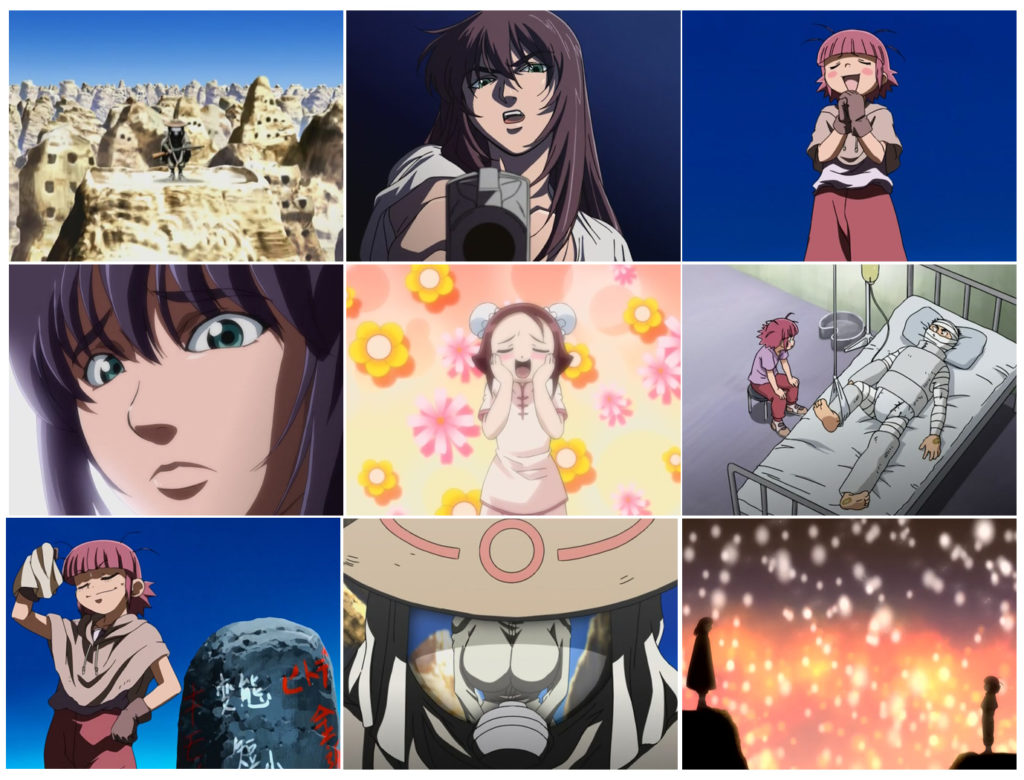 A great job was done with the creation of the setting the hot, empty desert is very convincing.
The anime is a bit like the older adventure animes of the 200x years, it is slightly compareable with Trigun, aside from the more advanced technology level, western theme and the pacifistic main character.

The anime has a number of nice comedy moments that consist of slapstic and dark humor, that made me laugh very hard. The chemistry between the characters is directed very well and brings this anime to life. What I actually liked about this anime was that they didn’t changed Kanta’s personality during these 24 episodes, he alway stayed the greedy bastard who didn’t give a damn about being a good guy. He is an exceptionally well portrayed antihero.

It’s not that easy to tell who is evil and who is not in such an post – apocalyptic setting.

Sunabouzu is a very interesting slice of life, action adventure, that shows us a fictional, but possible change in human society. The wasteland setting is great and the story is full of interesting ideas and surprises. It’s really hilarious to see how the characters trick eachother.

This show has no black and white categories and with this ambivalent characters, Sunabouzu manages to give some more believeable depth to the personalities of it’s characters.

If you want to watch an refreshing old school style adventure  anime Sunabouzu would be the right anime for you. The exceptional main character and the portrayal of the crude and selfish sides of human nature is a nice change from the always so polite and fluffy anime.