Hi, Im back to business and today I’ll talk about Vivio in my review, Vivio was manufactured by ALTER and is a 1/7 scaled figure with a height of 280 mm. This figure was released in July 2010.

Her Origin is the anime called Mahou Shoujo Lyrical Nanoha StrikerS where her character was introduced for the first time. Vivio was found in a canalisation by two members of the Striker S team. In the progress of the story she was adopted by Nanoha, because of that her full name turned into Takamachi Vivio and also Fate took good care of her. The small family was fun to watch with Nanoha in the role of the loving yet strict father and Fate as the kind mother ;D

Normally Vivio is a 6 year old friendly child, but near the end the bad guys used a spell to transform her into a powerful and fearsome adult, Nanoha had to face in the final battle. 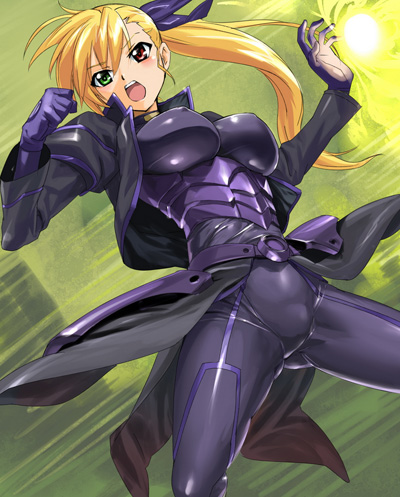 Vivio wasn’t my favorite character in the anime and no figure which was on my wishlist to begin with. This figure caught my interest when I saw her review at Tentacle Armada, she looked and sounded like a nice figure to own. I instanly checked my favorite figure supplier AmiAmi if she would be still in stock and I ordered her instantly. If I had waited a few weeks more I could have bought her for 60% off instead of paying the full price, because this Vivio figure turned out as a shopkeeper everywhere and all the shops keep listing her with crazy discounts, even today.

A trademark of Vivio are the bicolored green and a red eyes, she is showing a very serious and agressive face expression. I’m no big fan of figures with open mouths and here lays the only bad part of this figure. From the left her face looks a bit weird with her mouth like this, she looks far better when you look at her face from the other side. Anyway her mouth is sculpted in a very detailed way with the small front teeth area and a tounge. Her beautiful orange sidetail hairstyle with the nice blue ribbon fits very well to her overall look, some strands are hanging in her face and are covering her left eye a bit.

After unpacking her I’ve noticed that Vivio is in fact a huge piece of PVC in form of a nice figure. What meets the eye are her proud boobs which are very prominent in that pose of her. The pose looks very dynamic with the energy ball in her hand she looks like she is throwing a powerful baseball pitch ^^.

Her outfit looks like it comes from an Xmen Movie, she looks very cool in it, her outfit is a tight, matte blue greyish body suit with metallic looking armor parts at her stomach, she also wears a shiny dark grey coat and a shiny grey skirt with blue outlines, the high collar of her coat looks also very cool. A nice detail is that she has several gems all over her outfit, if she would also wear army boots and sunglasses, Vivio would have one of the coolest figurine outfits ever ;D.
The gloves are also a cool detail of this figure her fingers are very well sculpted, Vivio comes with a energy ball which can be placed into her hand, it was her main weapon in the show.

The paintjob and sculpting of Vivio is very well done, I couldn’t discover any flaws in this figure. Albeit the weak point of her pose is definetely her face from the left, it looks a bit strange I would display her with the other side around. Vivio has the typical base from the Nanoha line of Alter, a plain white and shiny rectancle with grey font not very attractive but it serves it purpose. It is very stable, Vivio’s shoes won’t come off that easily when put together with the base.

This figure of Takamachi Vivio looks very good and the overall quality is very impressive with all the details on her sculpt and her suit. Vivio’s battle suit looks really cool and stylish. Also her pose is very well done it shows a strong and powerful body expression. On thing that is not so good is that Vivio’s face does look strange from some angles, which mainly the fault of her wide open mouth. I would recommend this Vivio to everyone who likes big 1/7 scaled figures with a cool battle outfit, a dynamic pose and a more serious or better said agressive face expression.

After ordering Vivio I had doubts if this was the right decision to order her, because she’s really huge with her 280 mm in height. I thought about reselling her after taking the pictures for the review and oh well I sold her after some month. I didn’t sell her because of her size, I couldn’t get used to her agressive face expression, I just prefer figures with friendlier face expressions.

Three other reviews can be found at