Here we have our next figure review, it’s about Touka Kureha. The figure was manufactured by Max Factory and was released on October 2007. Touka Kureha is 1/7 scaled figure she’s about 240mm in height which is very huge in comparison with my other figures I mostly own 1/8 scaled ones. Kureha was one of my first “bigger” figurines I ever bought. 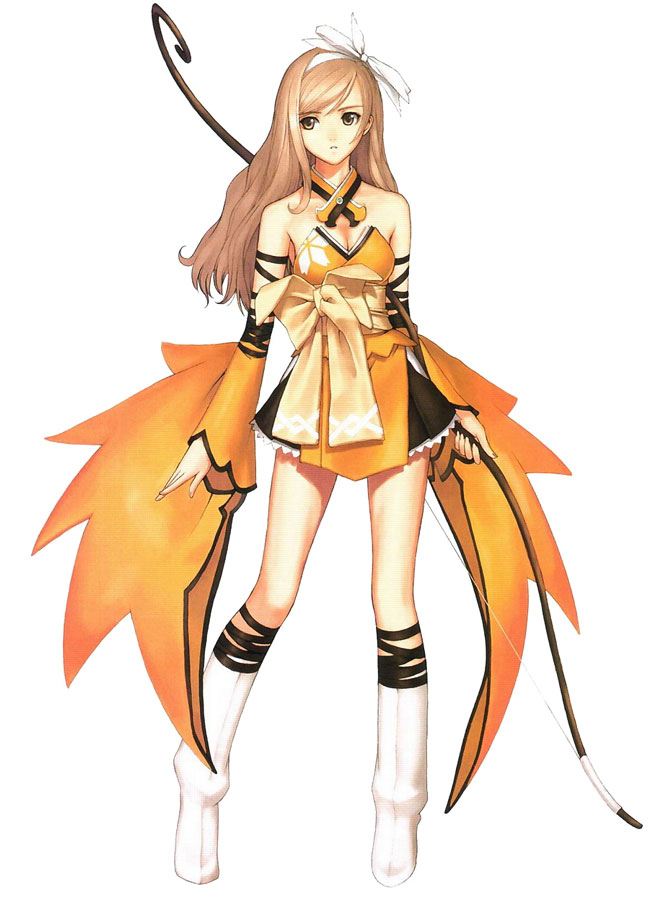 This figure is sculpted after an illustration of the popular artist Toni Taka. Her real origin is a famous game called Shining Wind. She also plays a role in the anime show which has the same title as the game, but many people told me that the show was not so good and so far I’ve never watched it. Maybe I’ll watch it this year if I find the time. As I’ve ordered her I didn’t know about her origin, what caught my attention was the flashy look of her outfit and the cute appearance of Kureha. The eye-catching parts of Kureha are her huge orange sleeves and her long legs. 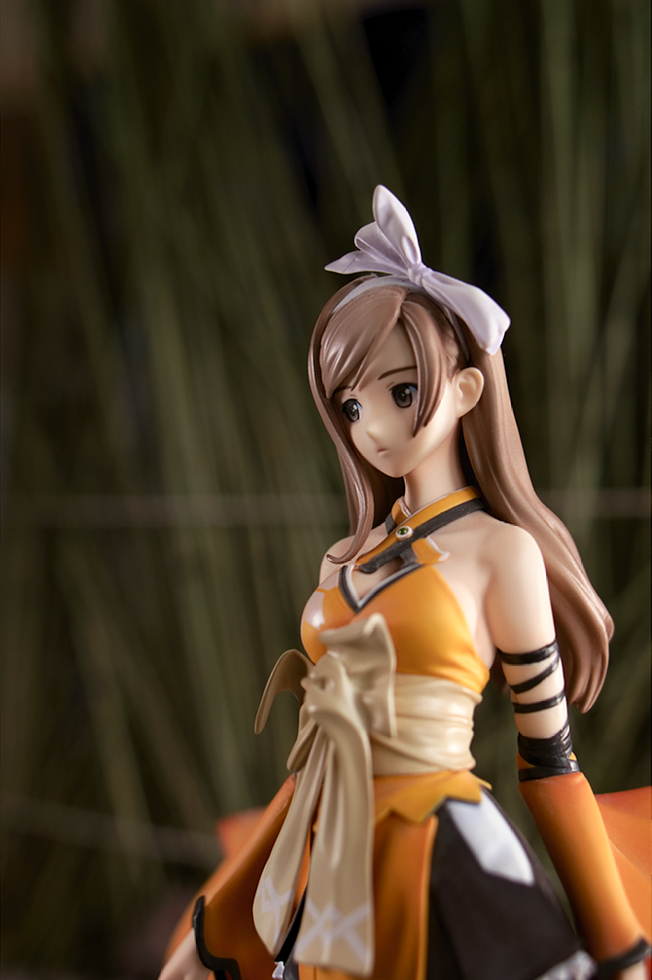 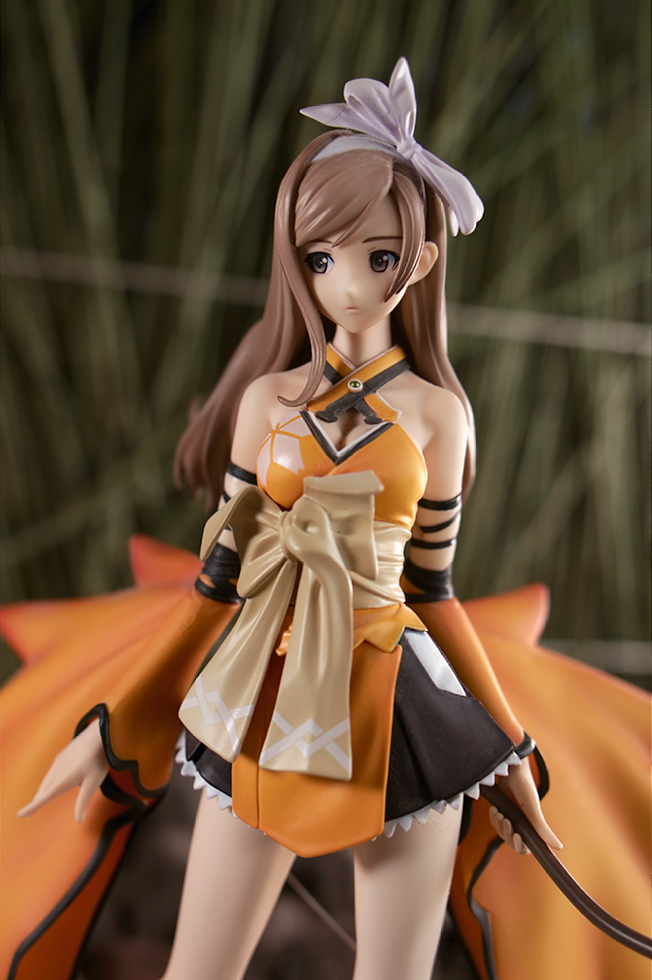 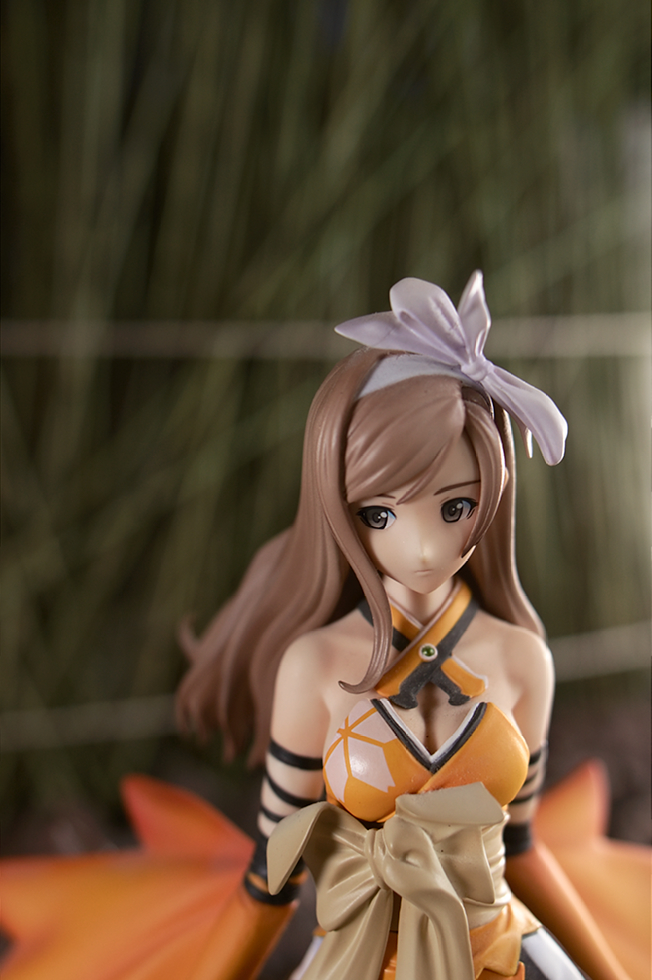 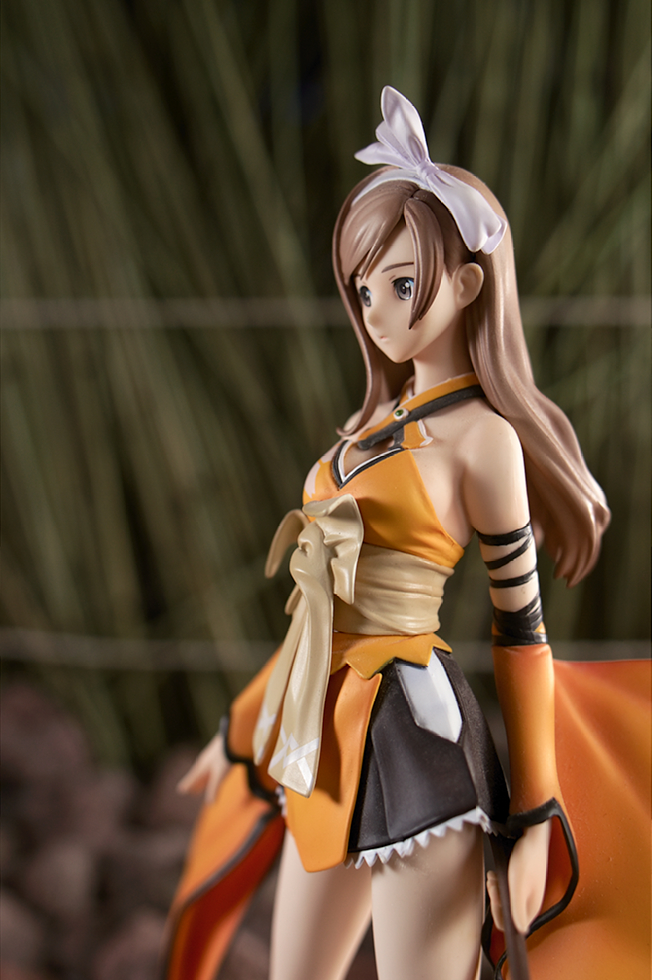 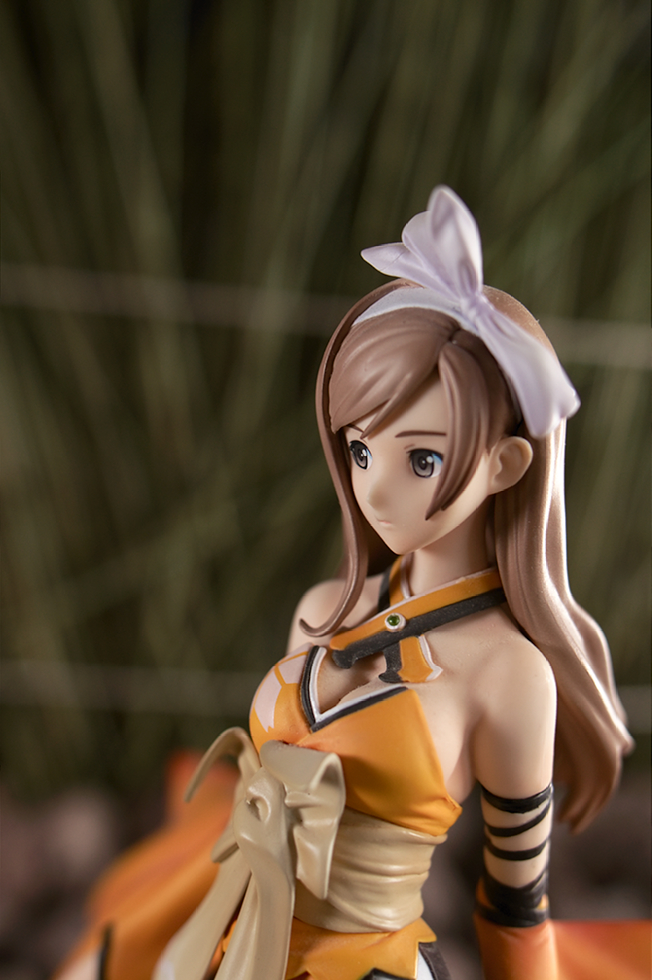 In comparison with her upper body her legs seem to be a bit unrealistic long and big.

The design of her sleeves is very well done and looks very pretty on the outsides they are shaded witch a darker orange tone. The orange and brown colors of her outfit fit together very well. Nearly everything on her outfit is sculpted very nicely, the strings at her arms and boots are pretty detailed to complete the overall look. The pose looks like the illustration it’s not dynamik or very special, but she looks very good in her pose. Kureha also comes with a long bow as weapon which an be placed in her hand. 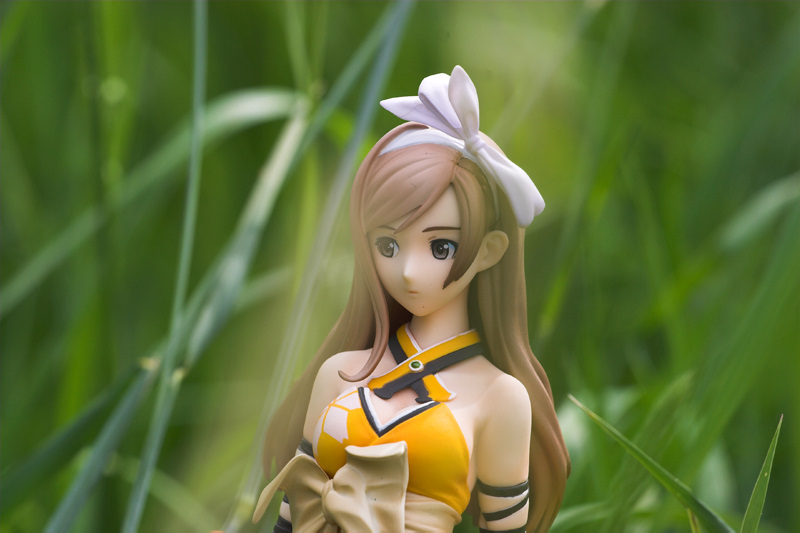 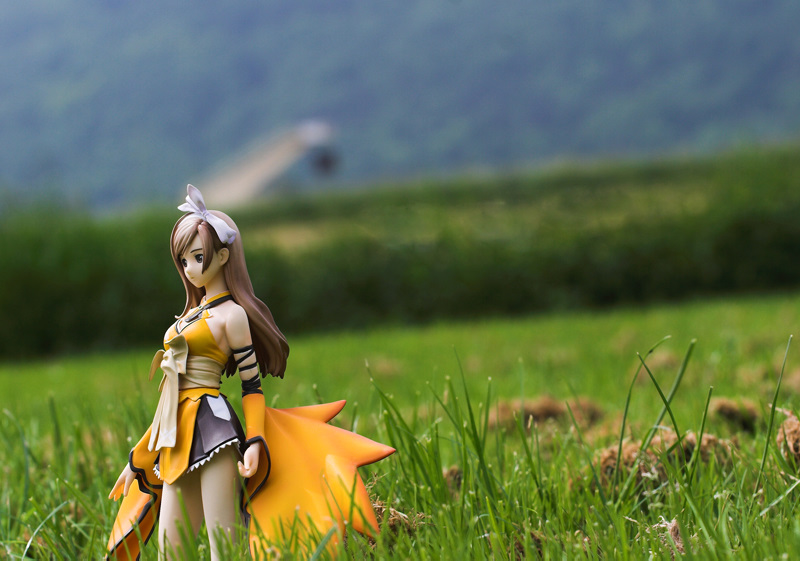 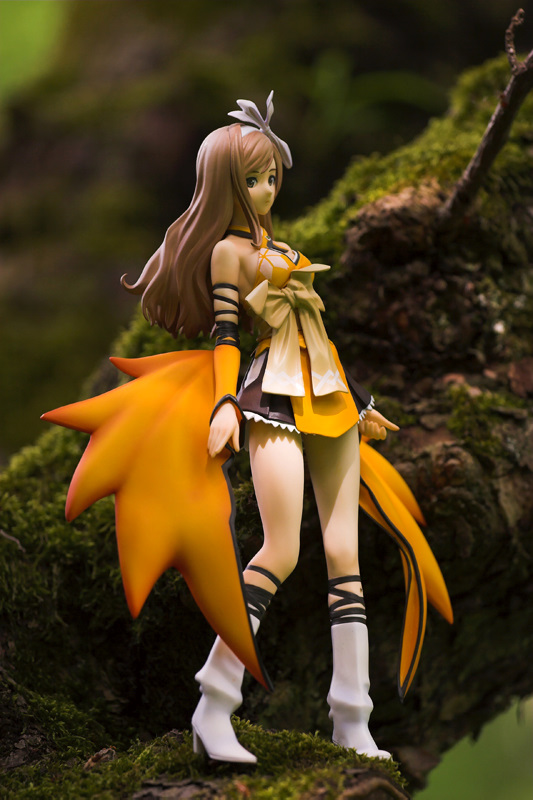 Her skirt is made of soft material, it is brown and at white jags at the outsides, the skirt is also castoffable but since her butt is very small and her panties plain white it’s not very interesting 😉

The light brown hair is sculpted very detailed and shows finely sculpted strands, the light purple ribbon on top of her head is a nice item and adds more cuteness to her head, unfortunately at the backside the hair looks less detailed than on the frontside.
Kureha has a very pretty face her eyes as well as the area around her eyes is very well painted, she has a shy nearly sad face expression. In her illustration her face looks a bit more mature, but without knowing her origin at that time I didn’t care about that and now I also dont care. 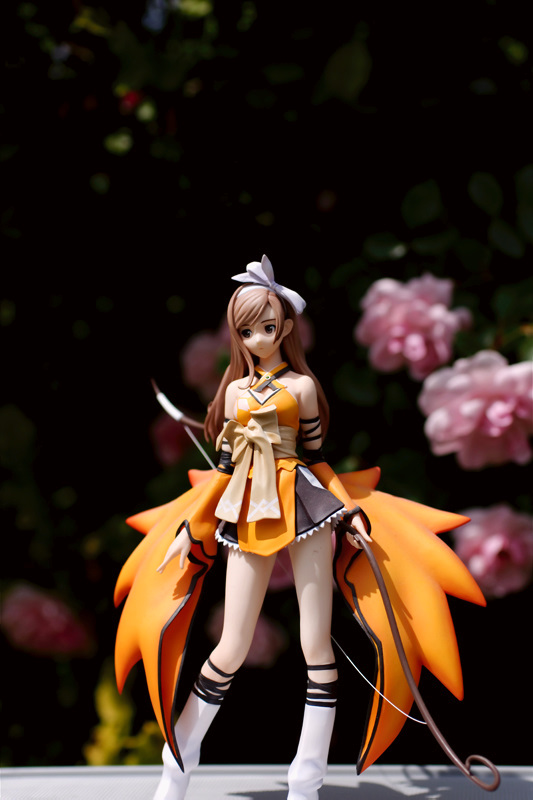 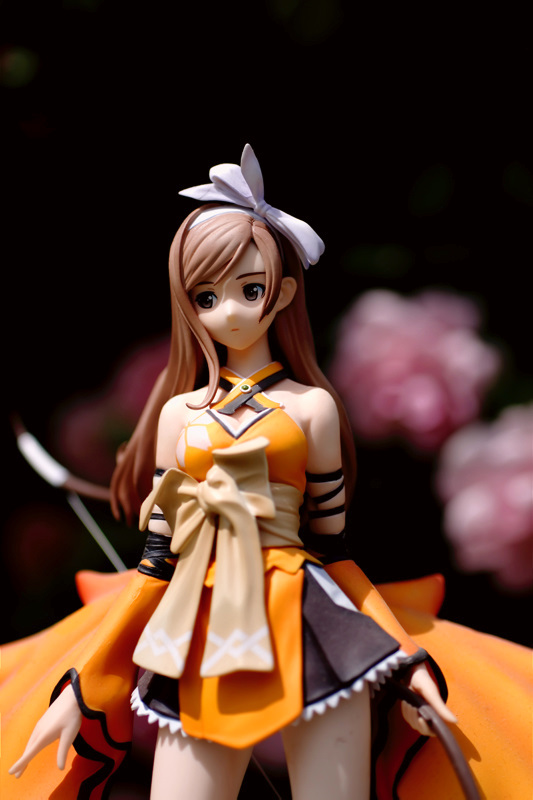 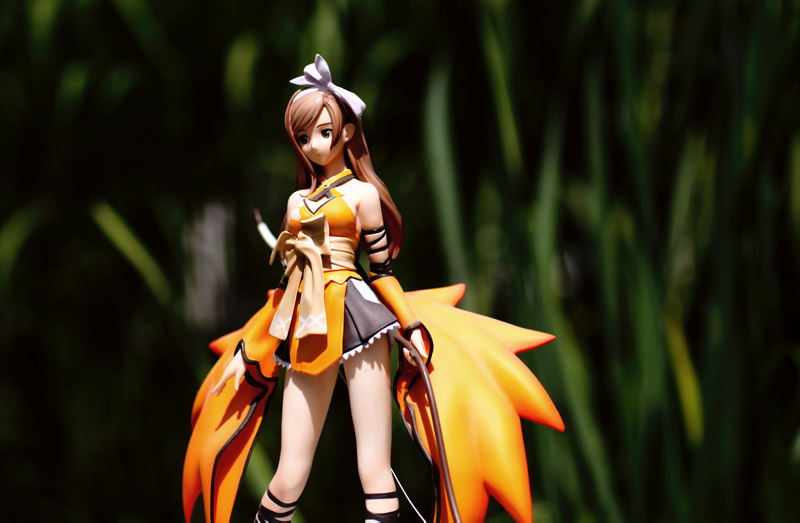 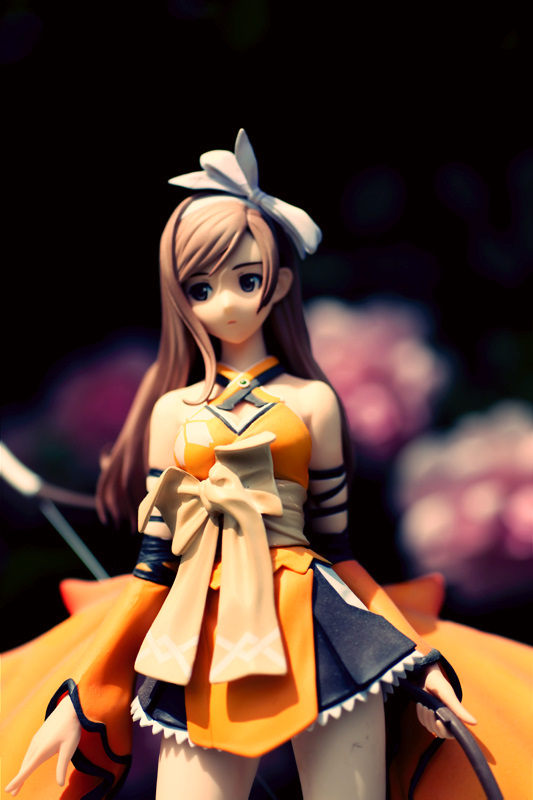 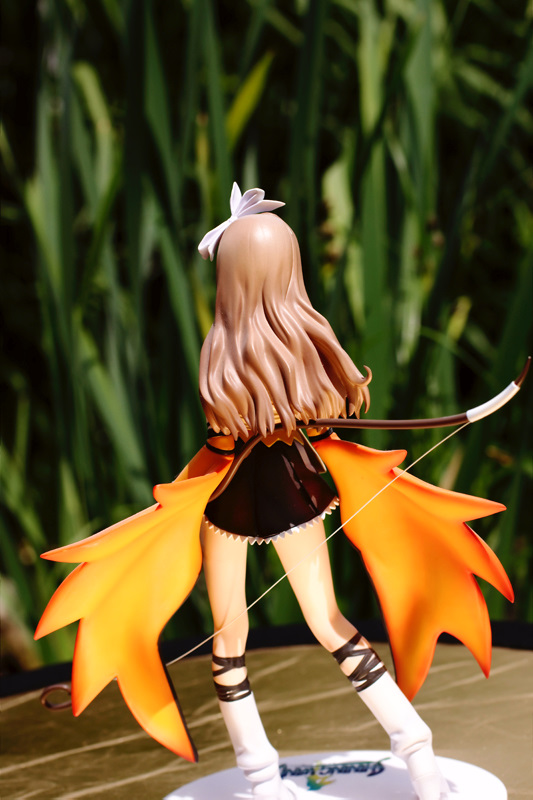 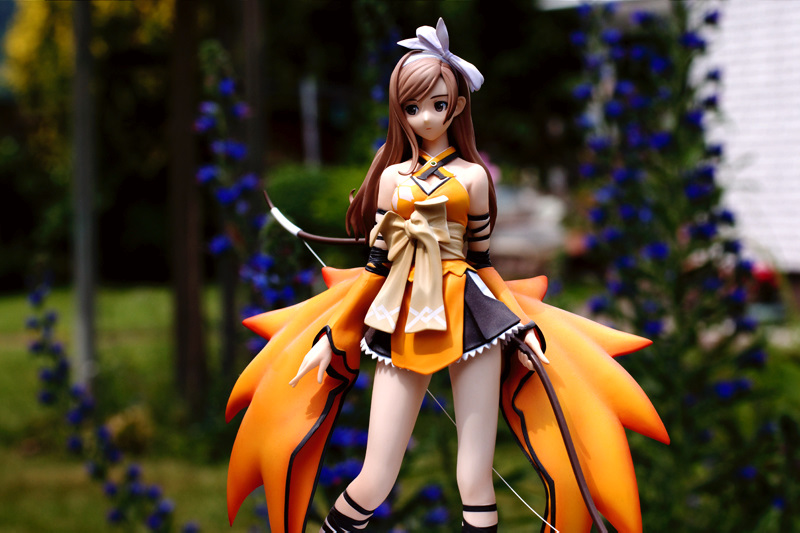 Overall Kureha is a big and beautiful figure her nice looking fantasy outfit looks great and resembles the illustratiobn very well. The parts about her which bother me a bit is the big ribbon at her stomach it looks a bit cheap in comparison with the rest of the outfit. It is well sculpted but has no painted shadows or highlights. Another not so nice the back part of her hair which looks a bit undetailed in comparison with the front of her hair.

For most of the pictures I’ve taken I’d used a new method which Samejima mentioned in one of his blogpost. In short, It’s a plate which you attach to your tripod, I was very interested in this idea so I searched for such a plate with a ¼ nut. At the beginning of this week my plate arrived and so I tried it out. Ok my plate isn’t transparent but I don’t need this for my purposes.
The advantages of this method are the freedom of choosing a good background without searching for a spot for placing the figure safely. It also gives you more control for the depth of field. by changing the distance between the figure and the background. The background can get more or less blurry its up to you.

When putting tripod to full height I was a bit scared that the figure would fell down, but nothing bad happened.