Momohime or in other words – A figure which marched out to outclass most of the figures in your collection. Momohime was manufactured by ALTER, and is scaled 1/8 with a height of 210 mm. I firstly saw her at Wonfes and I know that I had to order her as soon as preorders were taken. I actually had to wait for Momohime’s release until late July of 2010. 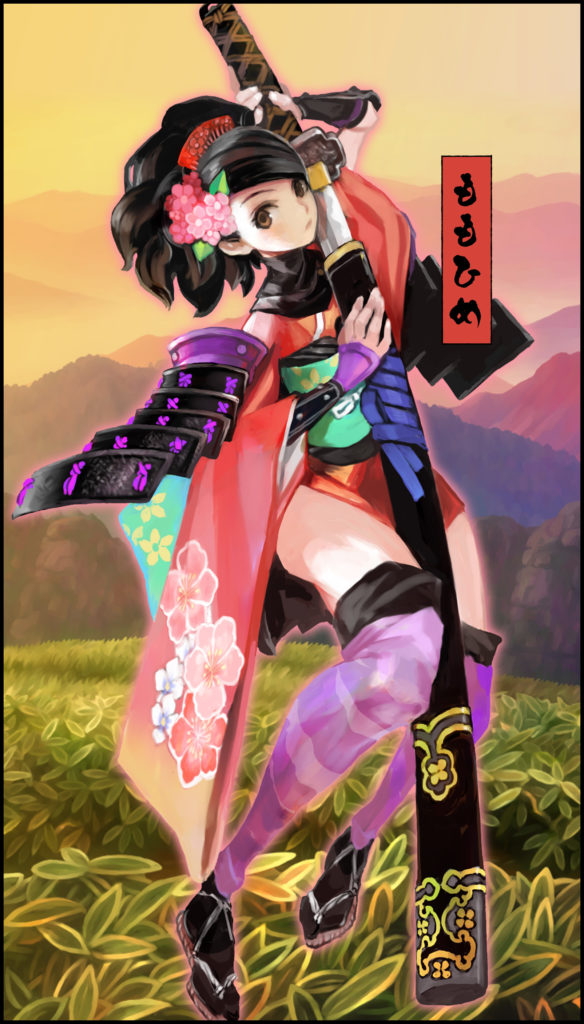 Momohime’s origin is the popular Wii Game Muramasa, the story centers around the princess Momohime, who was accidently posessed by a warrior spirit, whose target was another person. But the possession can’t be undone until the warrior spirit fullfilled it’s mission. A pretty sad destiny for the cute princess Momohime, but at least you can give her figure a good home.

I haven’t played the game, so for getting more infos you can visit the Muramasa webpage. 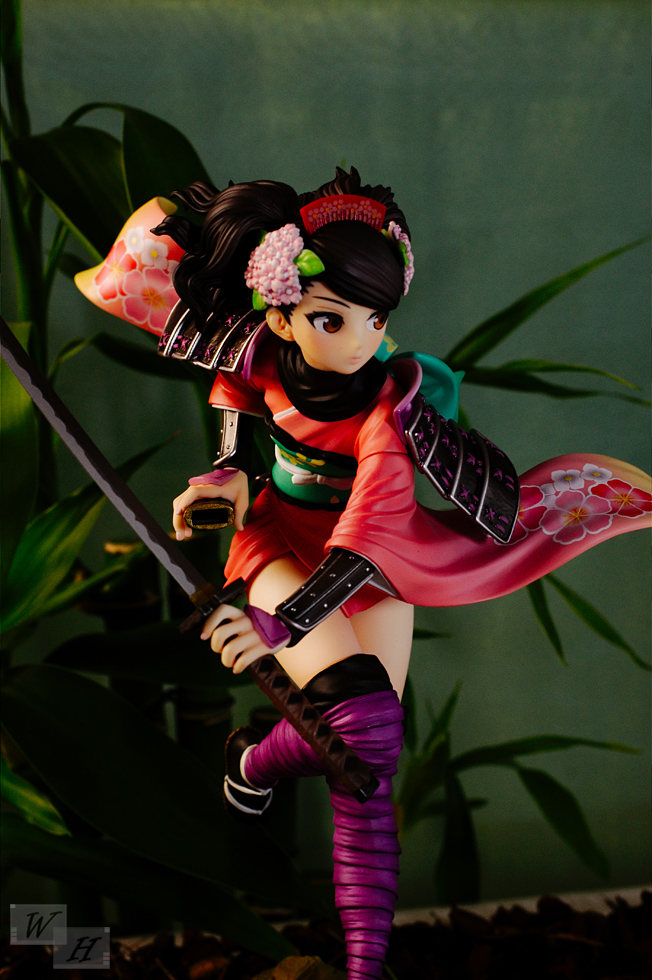 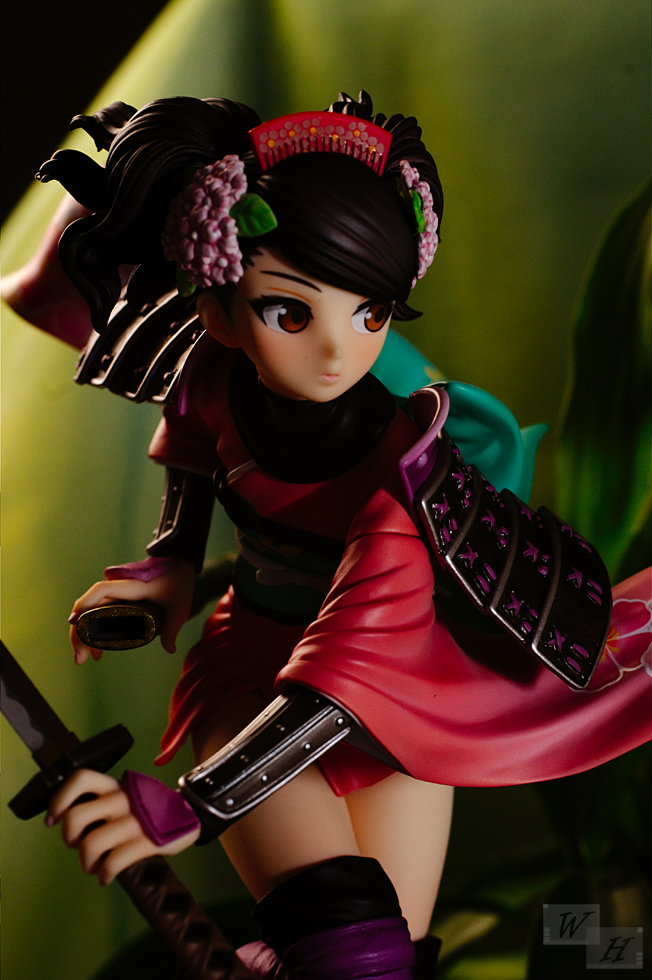 ALTER did a great job with turning this character from an 2D Game into a 3D figure, what I really like about her, is that she looks a lot different than figures which are based on anime or visual novels. Thanks to her detailed and vivid characterdesign ALTER could go all out on Momohime. 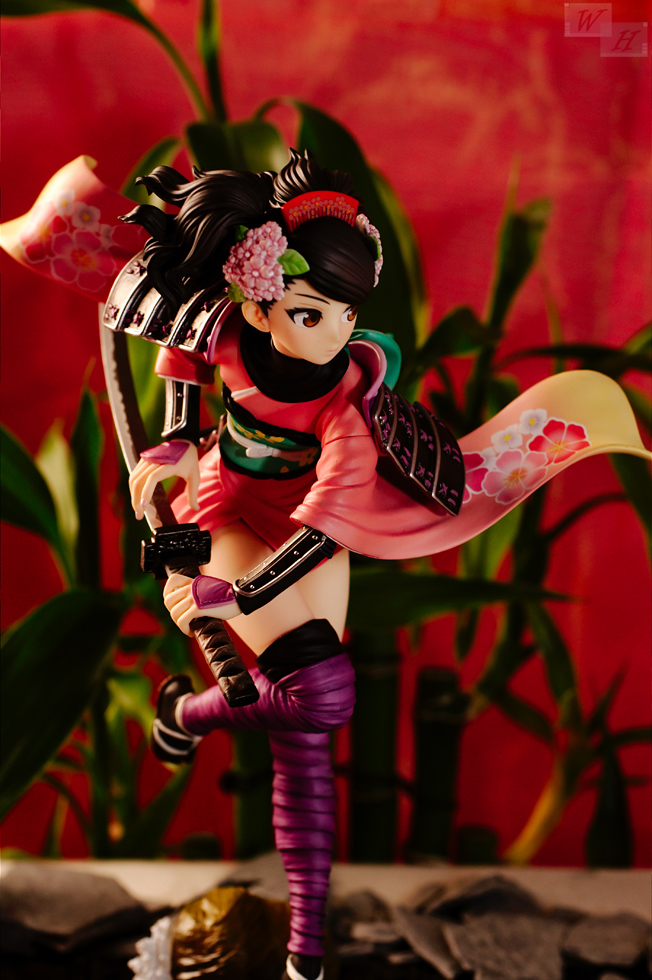 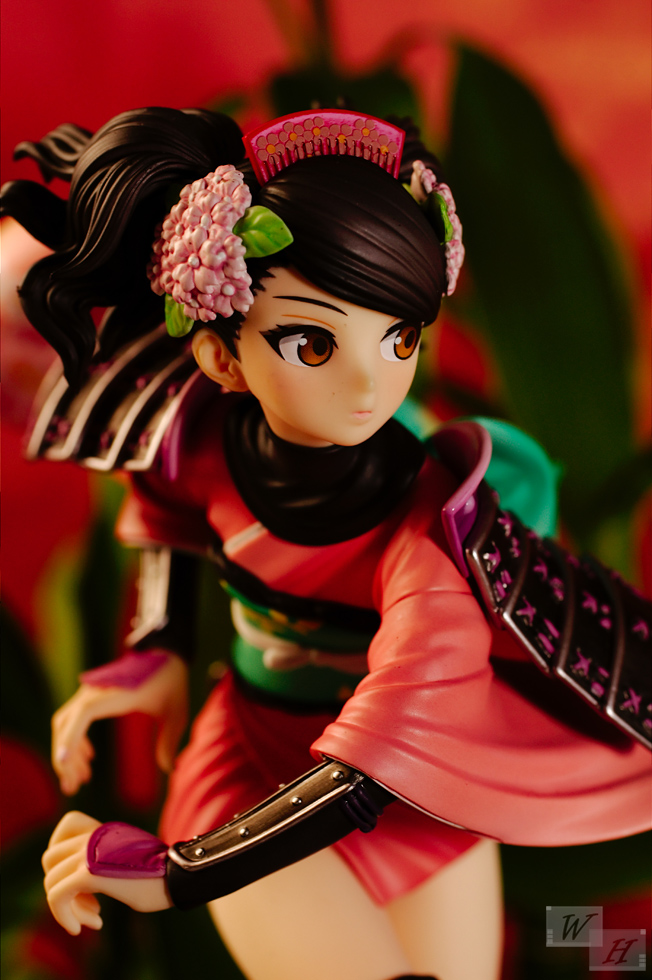 She has a detailed mouth and the oval shape gives her face a nice look. Her ears are also very well sculpted, lately I paid more attention to the ears of figures. What I also like about her is the fancy twintail like hairstyle, with these very detailed strands, furthermore she has blossoms at the left and right side of her head and a red comb with nice ornaments on top. 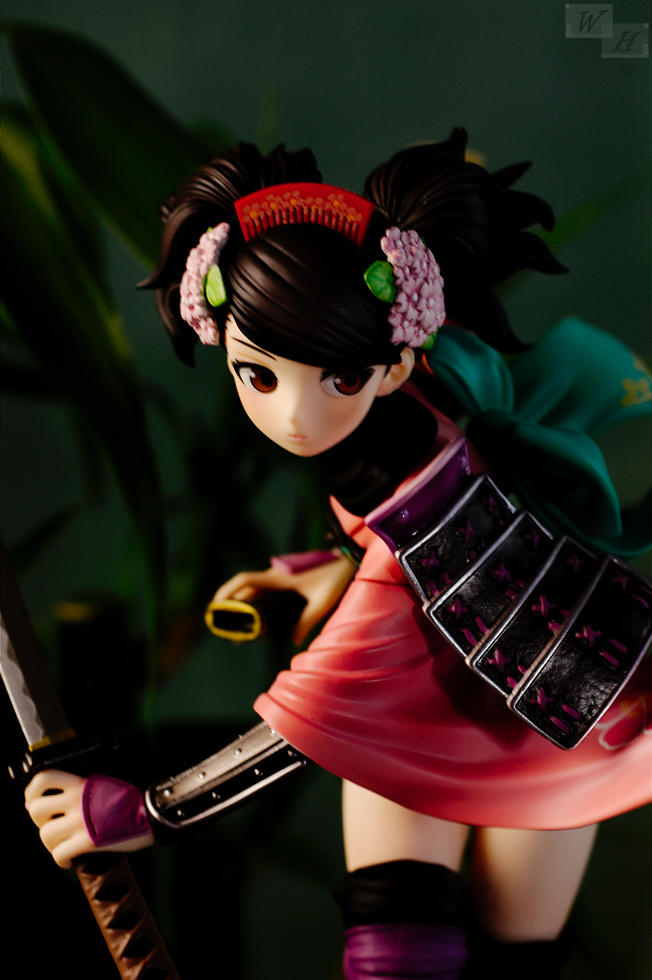 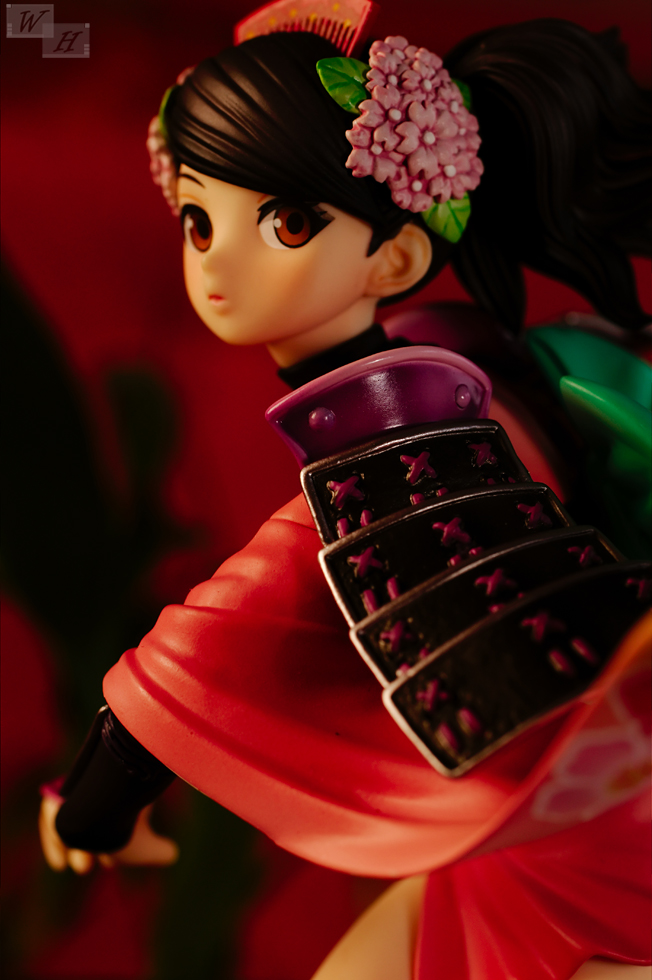 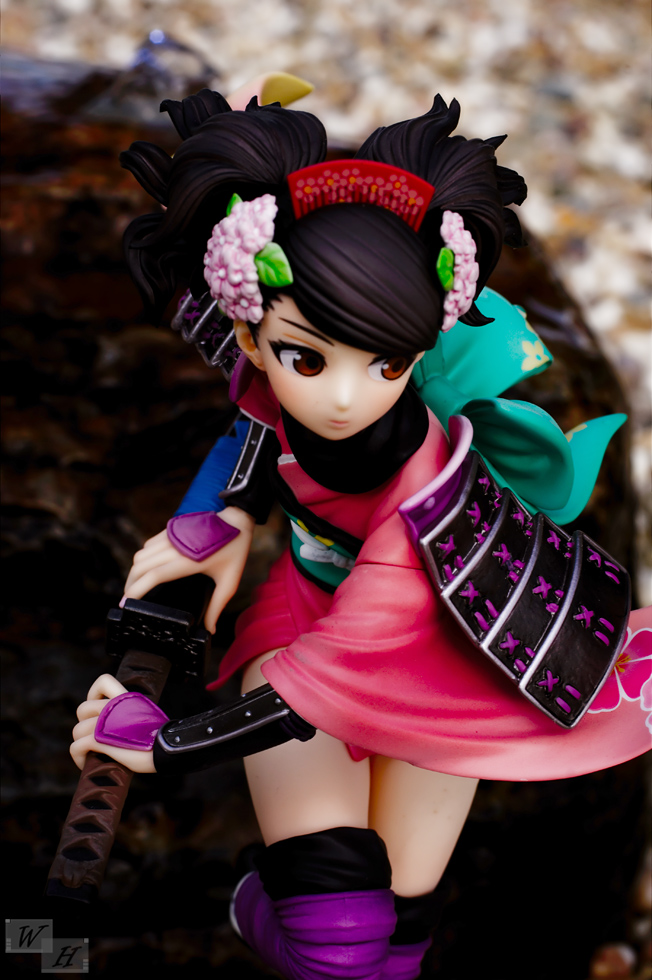 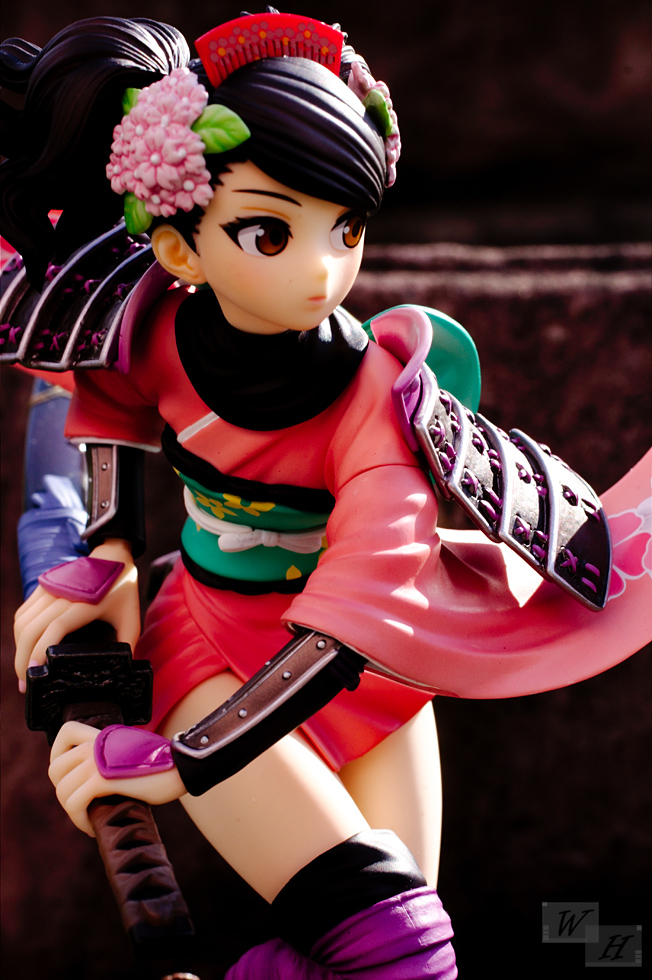 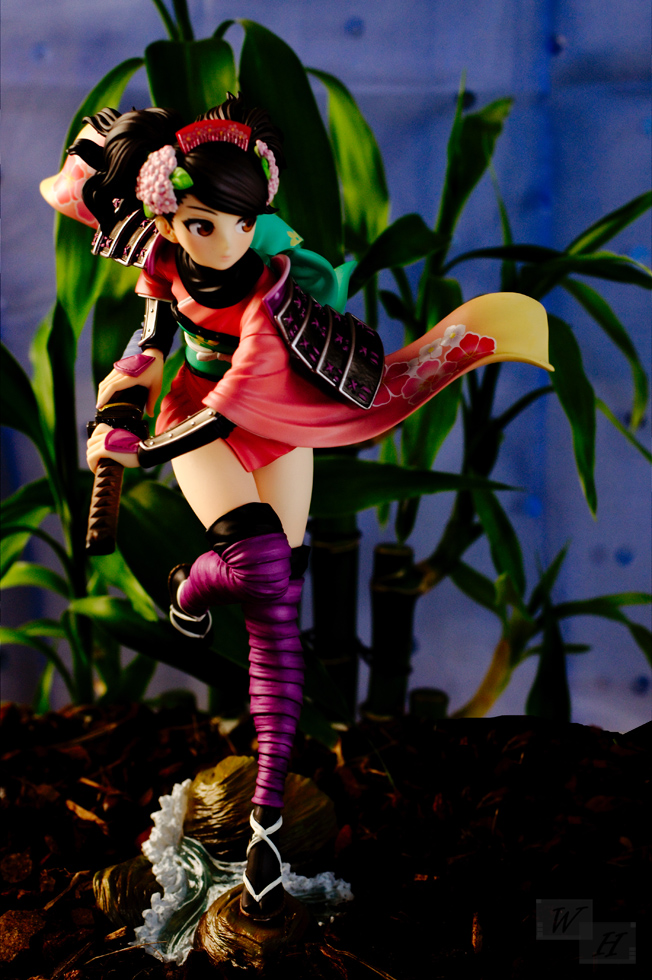 Another great element of her is the outfit, I like the contrast with the colorful Yukata and armor plates, her clothes look nice and have nicely sculpted wrinkles. The waving sleeve-extensions have some nice flower ornaments and a gradient effect. The armor plates have a metallic looking texture and overall an realistic feel to them. The figure also has very nice stockings with awesome shading effects, I really like the purple color with the black on top. Her footwear looks also quite good the shoe sole is pretty interesting. At first it looked like if she would wear no panties, but  in the end she has underwear. Her white slip is skimpy and reveals her sweet buttocks a bit when looking from a lower angle.  Aside from that she’s a real classy figure.

Even though she wields a comparatively huge katana and has armor plates, her appearance is that of a pure bishoujo girl. She has a beautiful face, great clothes and a petite body. Momohime has really nice and detailed sculpted hands, every single finger has three sculpted phalanges and the fingernails are painted. 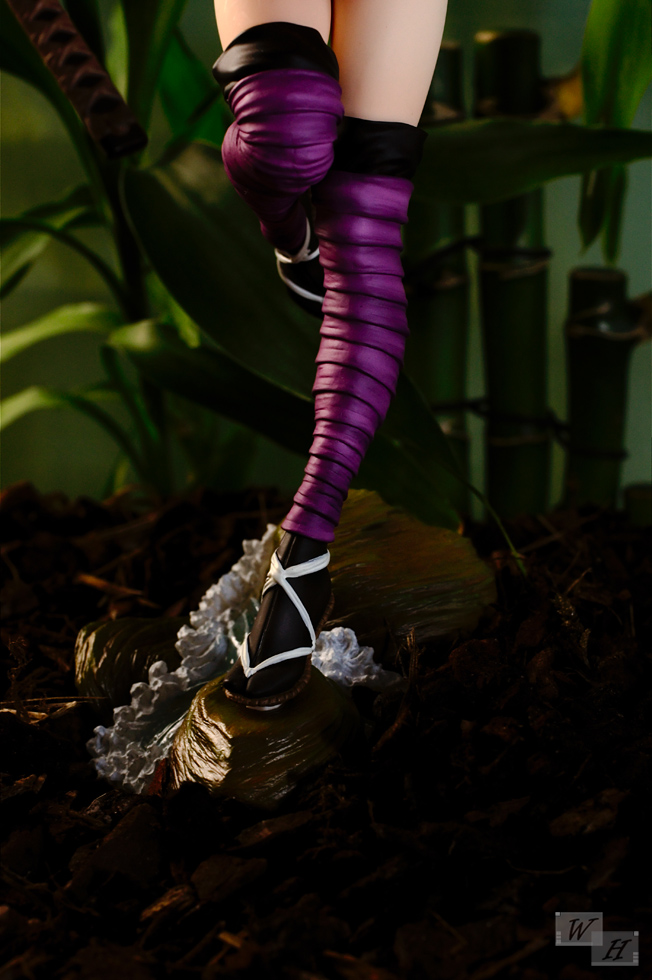 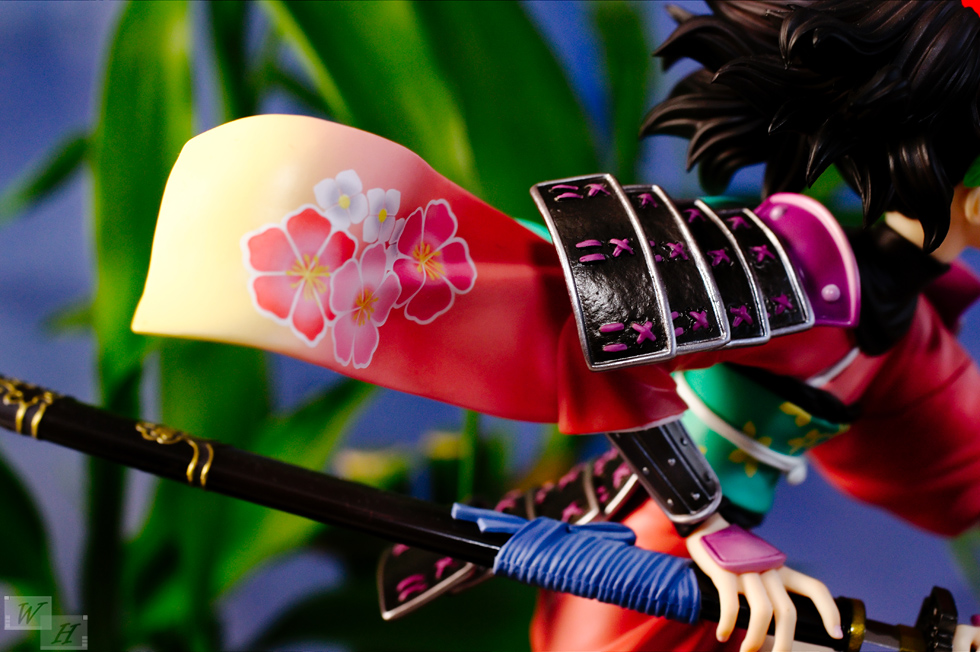 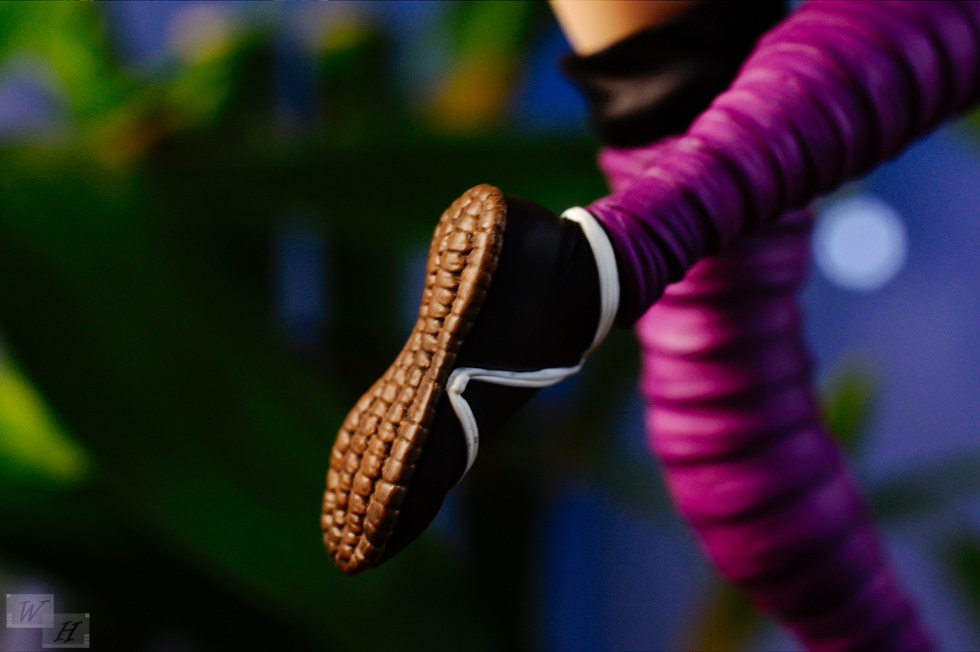 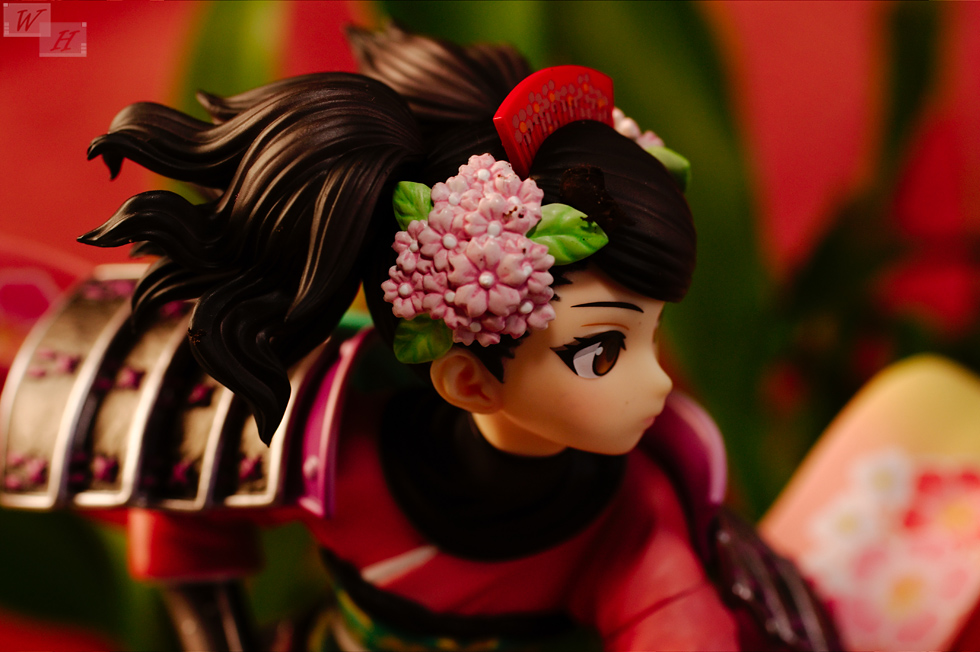 The figure  is designed for having several options for being displayed, she comes with a additional right hand and a second left sleeve. You can decide between; drawn sword with scabbard in the hand, drawn sword without scabbard in the hand and unsheathed sword. The interchangeable parts are fitting firmly in their place, and there are no loose parts which tend to fall off every second. At the part where you can change the sleeve is a small gap, which got some critique. For me its just a minor flaw which didn’t influence my positive impressions of her at all.

You can see that the pose is very dynamic and Momohime looks good from almost every angle. ALTER put a lot of effort into the base, which resembles a riverbed with green stones and risen water, the base is small, but heavey enought to support the one legged pose very well. 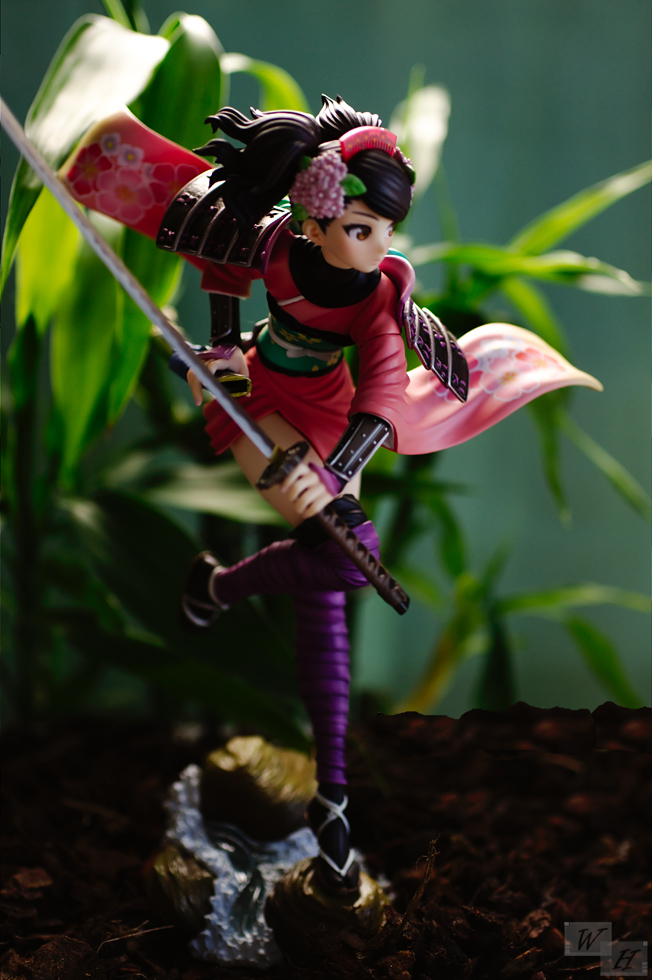 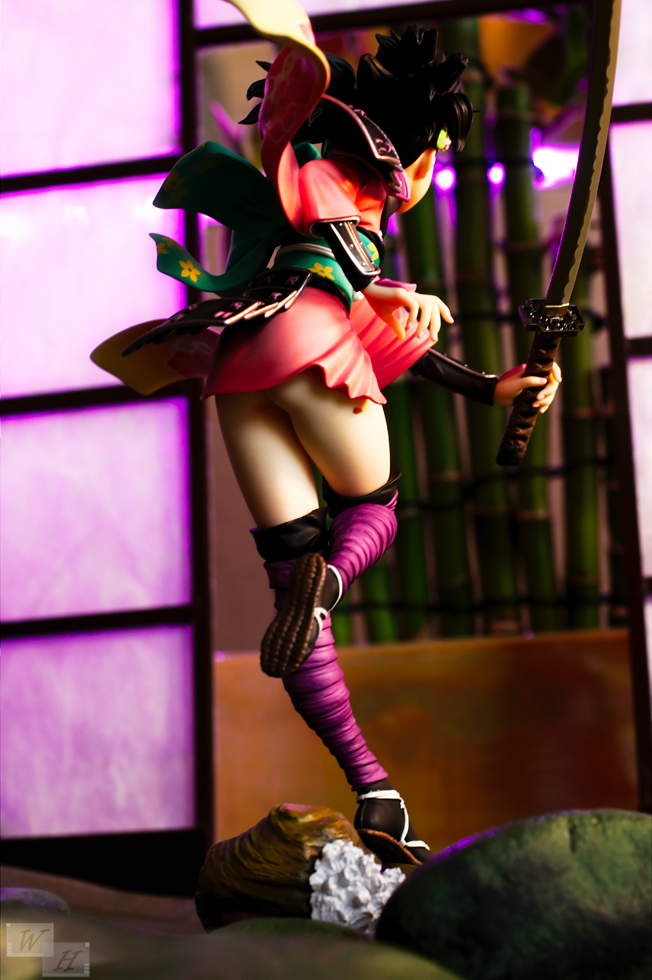 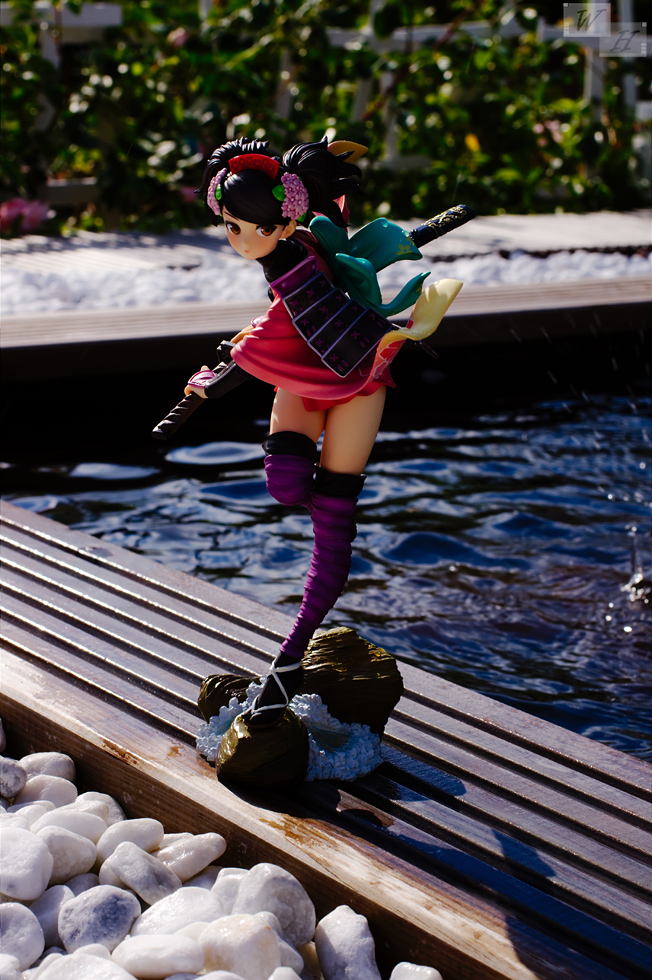 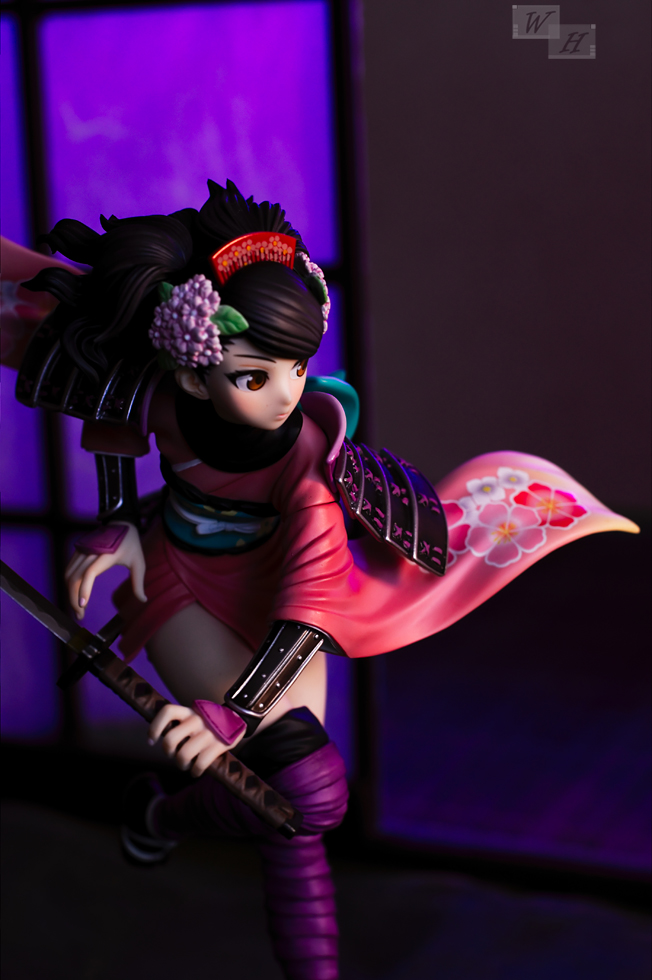 Even though my expectations of ALTER’s Momohime were high, I was very impressed that this figure and the level of detail paireswith such a perfect sculpting quality. Sheis a beautiful figure, her outfit combines warrior elements and traditonal japanese female fashion very well.
Im very happy about Momohime’s purchase, she is among the close favorites in my collection. 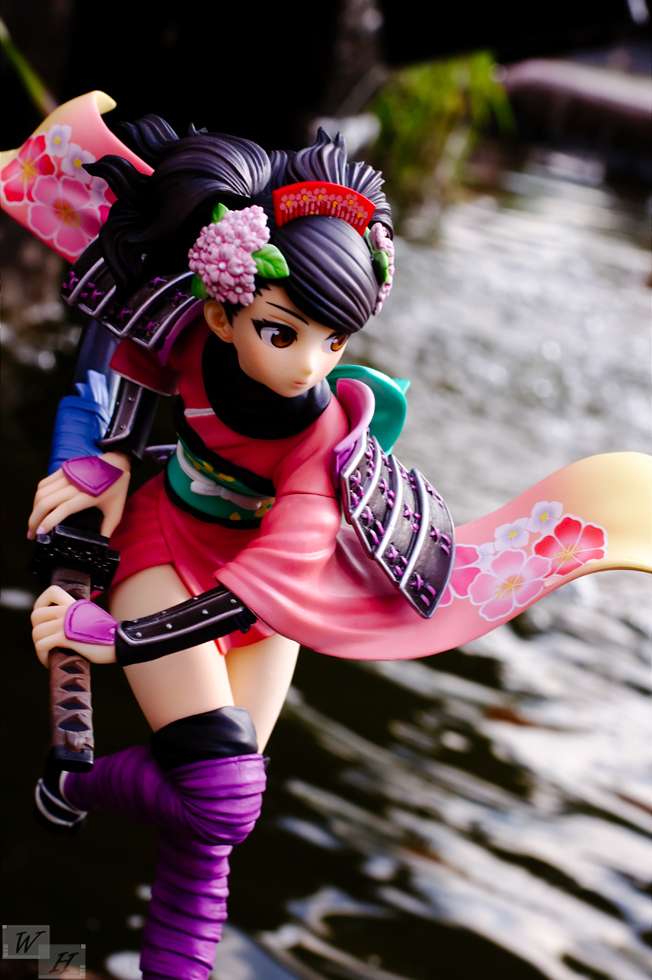 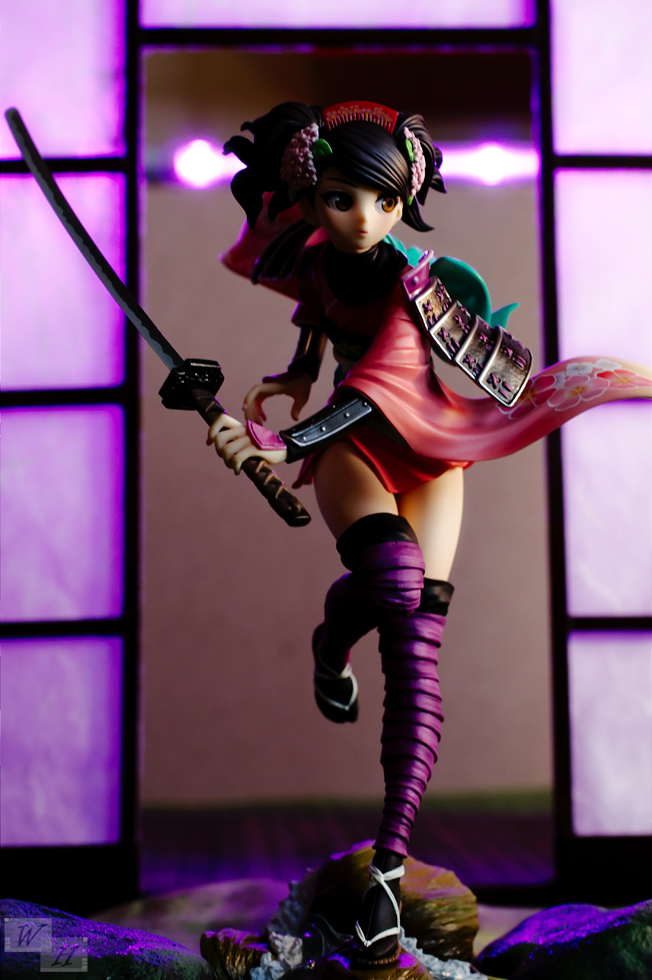 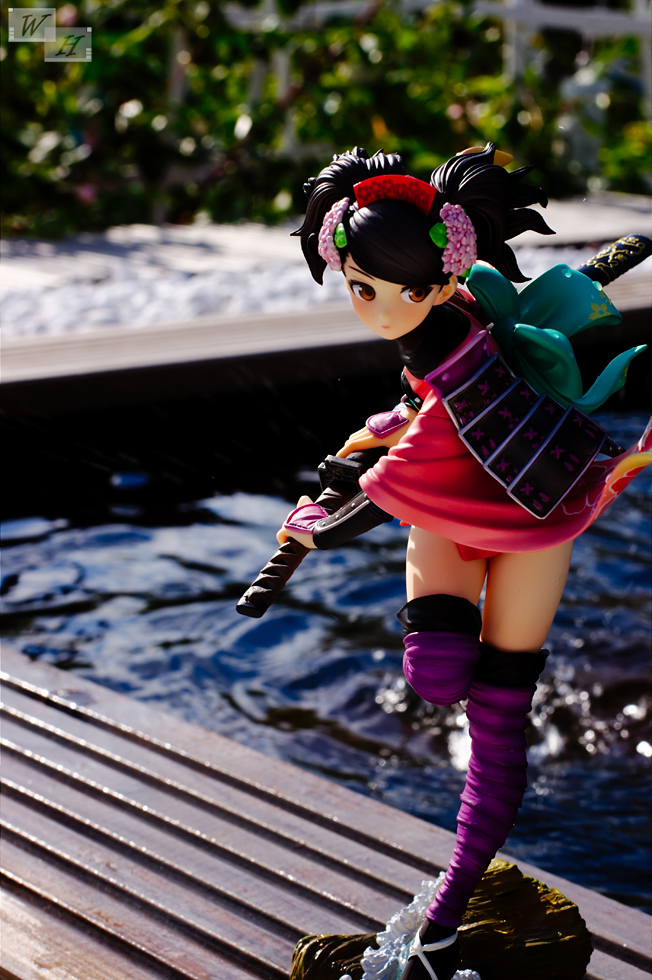 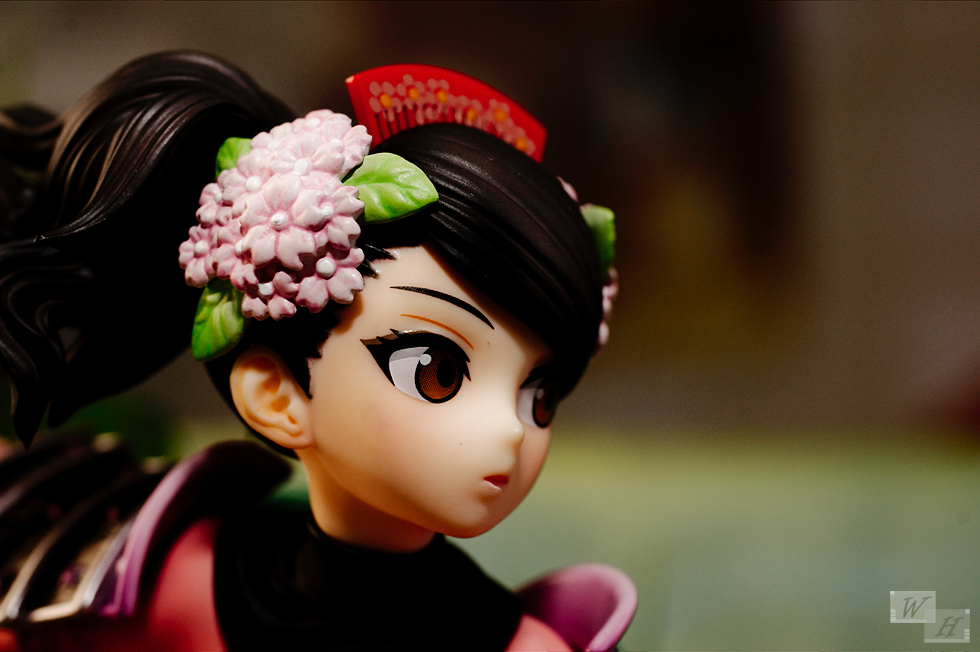 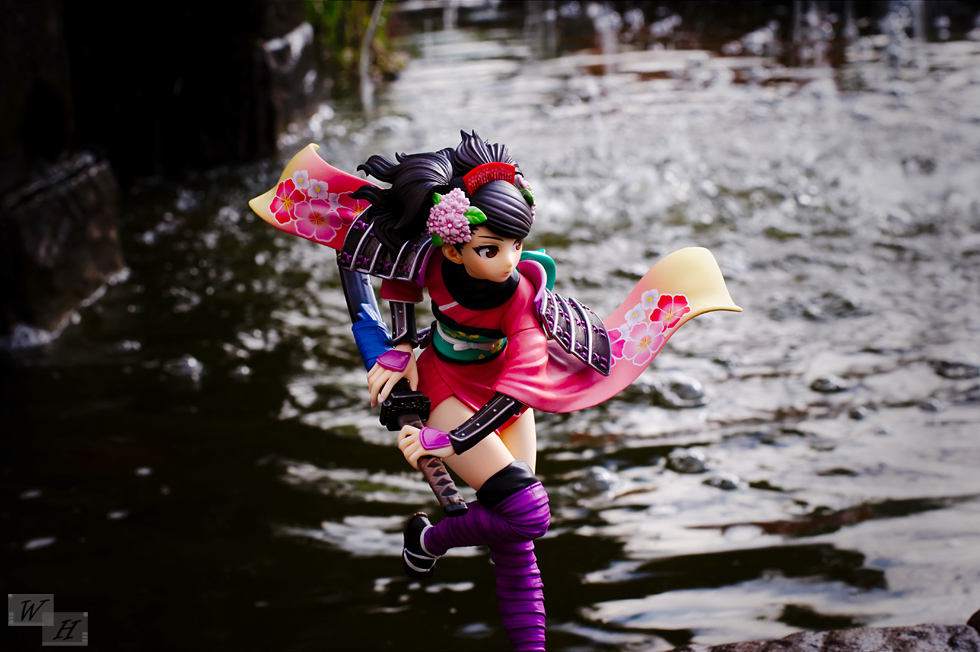 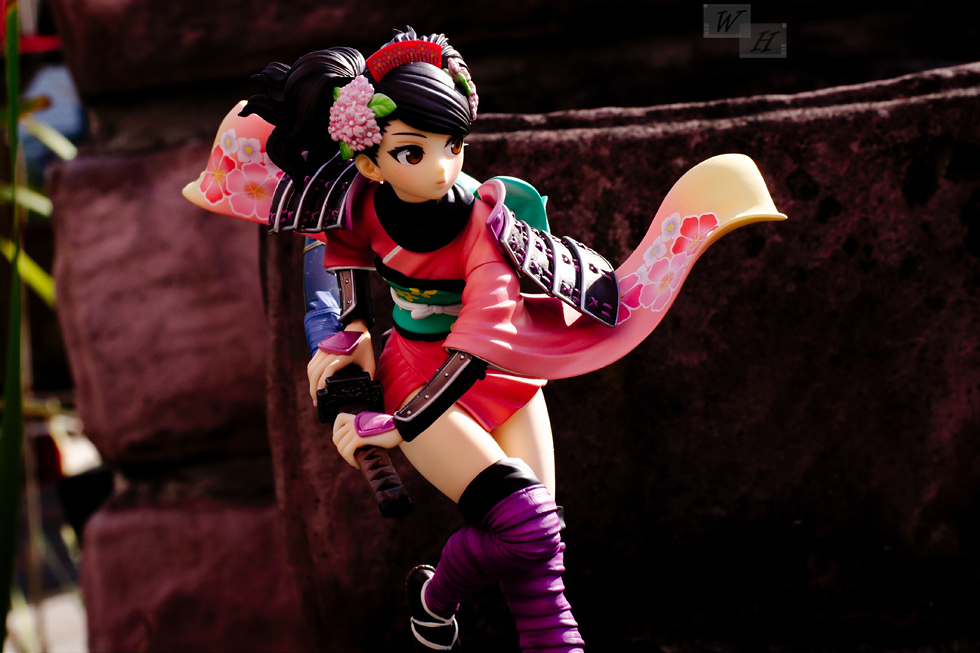 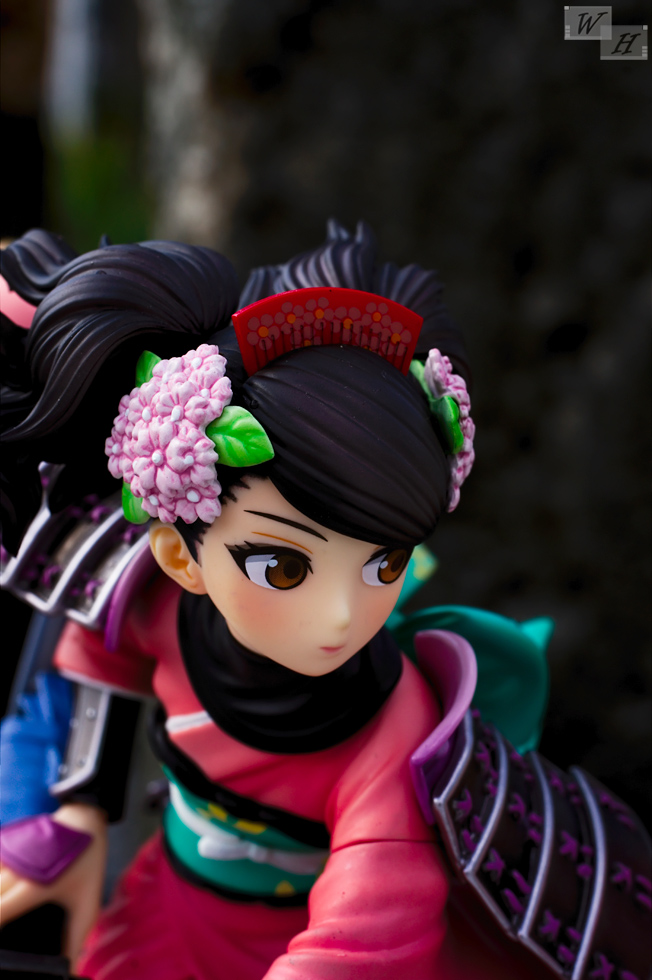 More reviews can be found at