Hi, today we have Good Smile Companies Nendoroid No. 118, Amano Tooko in the house.
Her origin is the Light Novel ““ where she is the president of the literature club.

She is a very kindhearted and lively person, she likes literature to the extent that she happens to eat what she reads. I only learned about her origin after I watched the Bungaku Shoujo: Kyou no Oyatsu – Hatsukoi sidestory. I  haven’t read the light novel, but I really enjoyed the OVA’s of this franchise, called Bungaku Shoujo Memoire which I watched after Kyou no Oyatsu – Hatsukoi. 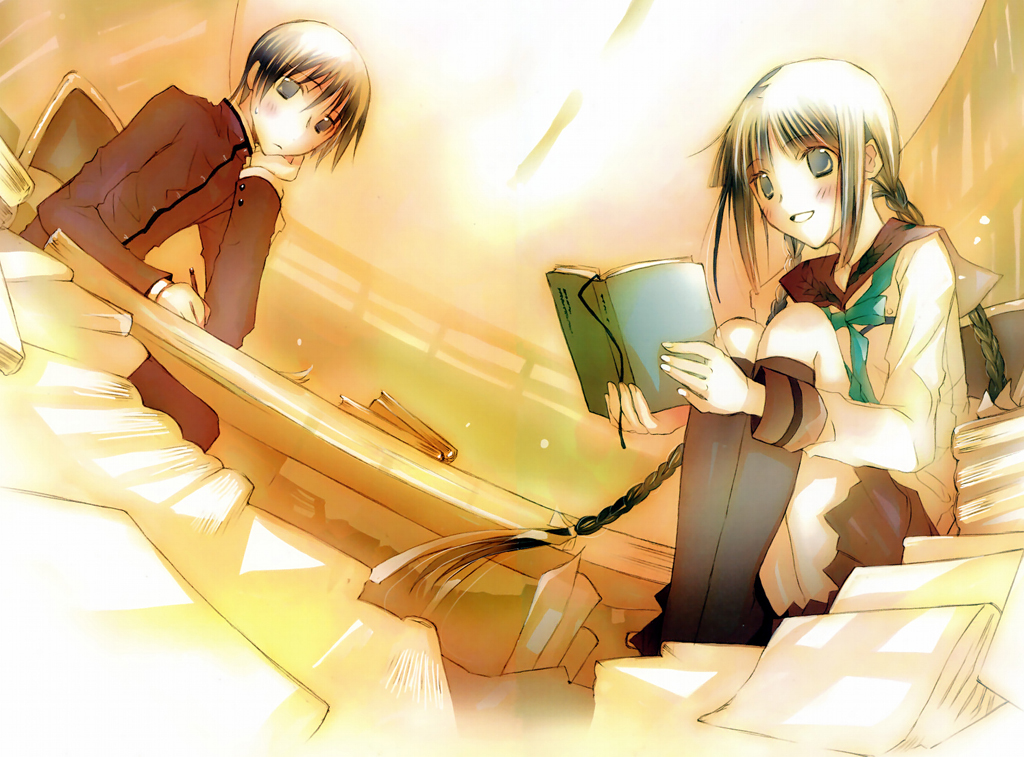 I also recently watched the movie Bungaku Shoujo but I didn’t enjoy it as much as the OVA’s
because they added a stupid yandere girl to the main characters cast, what a bitch ;D.

I bought two big Nendoroids so far, in the past I accidently broke their bases after only a few minutes of posing, well I was able fix them but not in a satisfying way, that made me that angry that I nearly gave up on buying more Nendoroids… Well, in the end I’ve bought anotherone, I really liked the look of this Amano Tooko Nendoroid with the sitting pose option, as well as the monster option, which gives her a different and crazy look so I couldn’t resist her *damn GSC*. 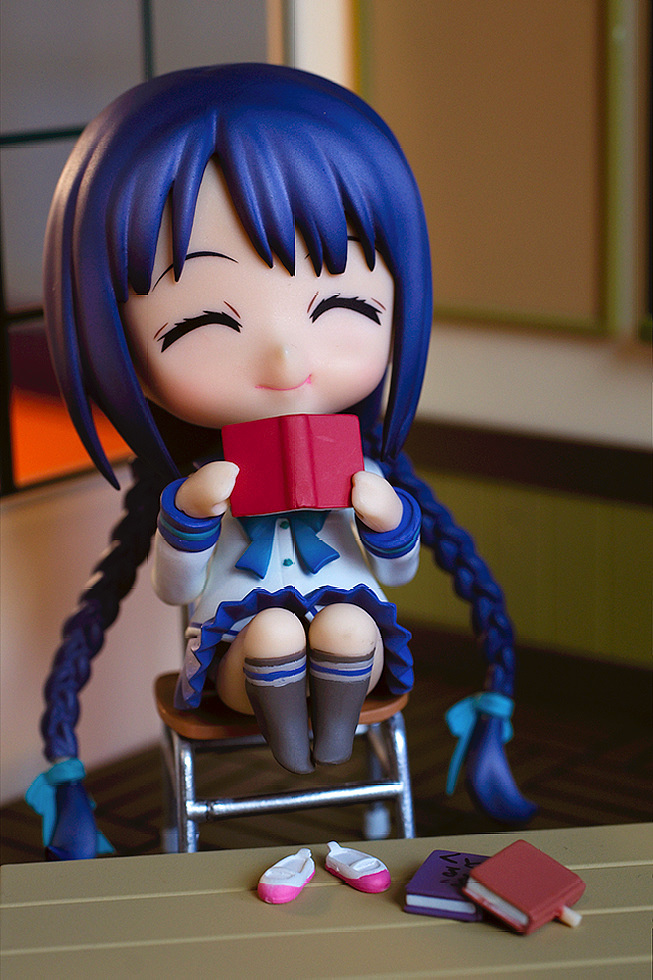 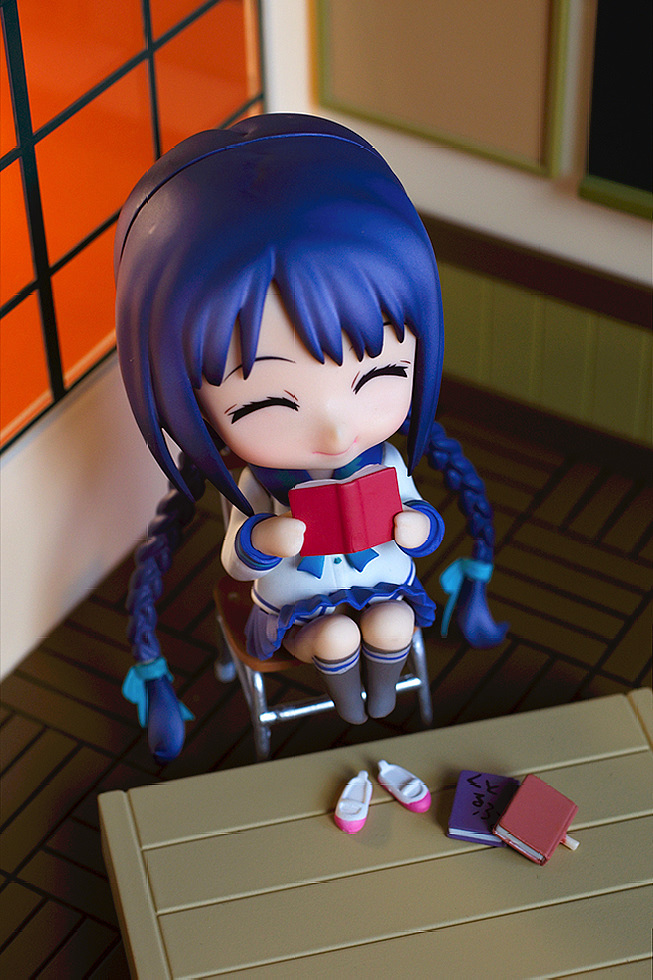 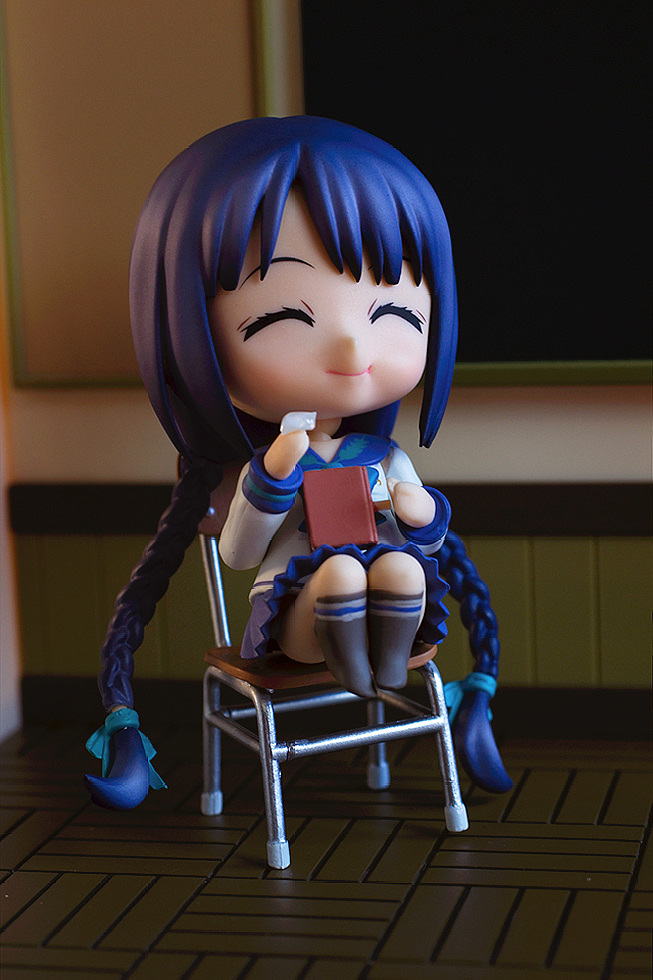 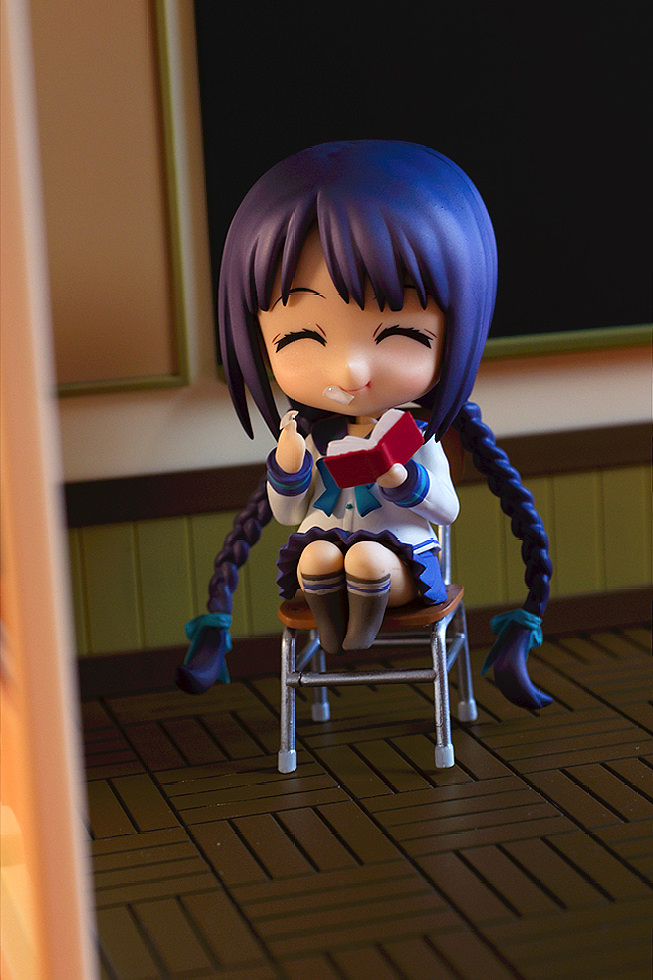 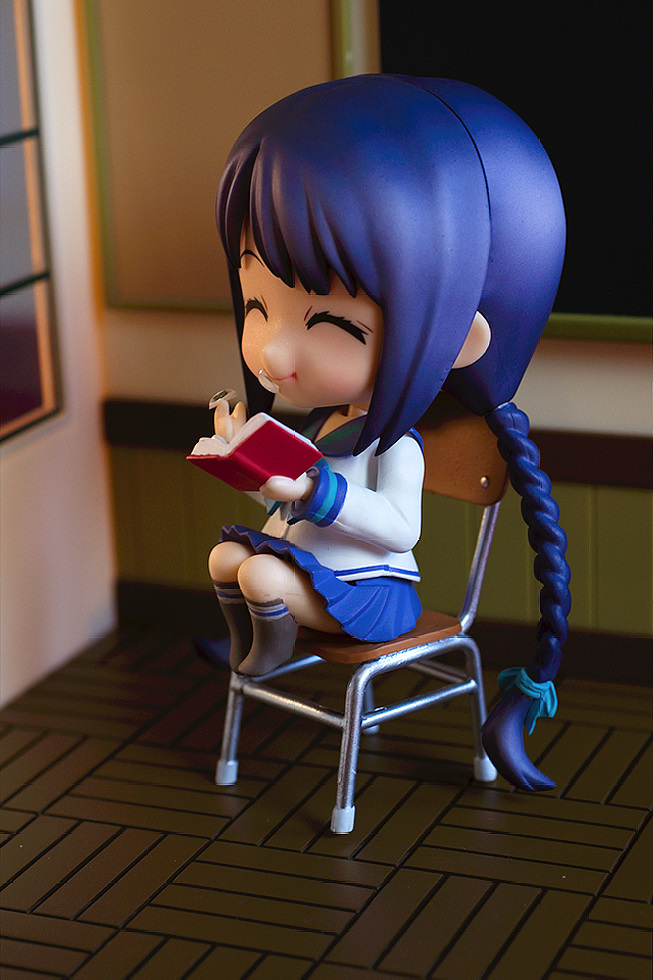 Now I will start to tell you my opinion and thoughts about this Nendoroid.

in general Nendoroids (not the standard bases ^^) from gsc have a very good quality. Tooko is no exception, she has clean and accurate painted parts. The blue colortones of her are looking really good together with her white shirt, also the shading of the hair is very well done. The faces and their expressions are painted clean and accurate as well. Overall the parts are fitting very good together, I noticed that the tips of her braids fell off some times, but the other parts like the arms, the hands, the legs and the heads were fitting accurately and were easy to handle. 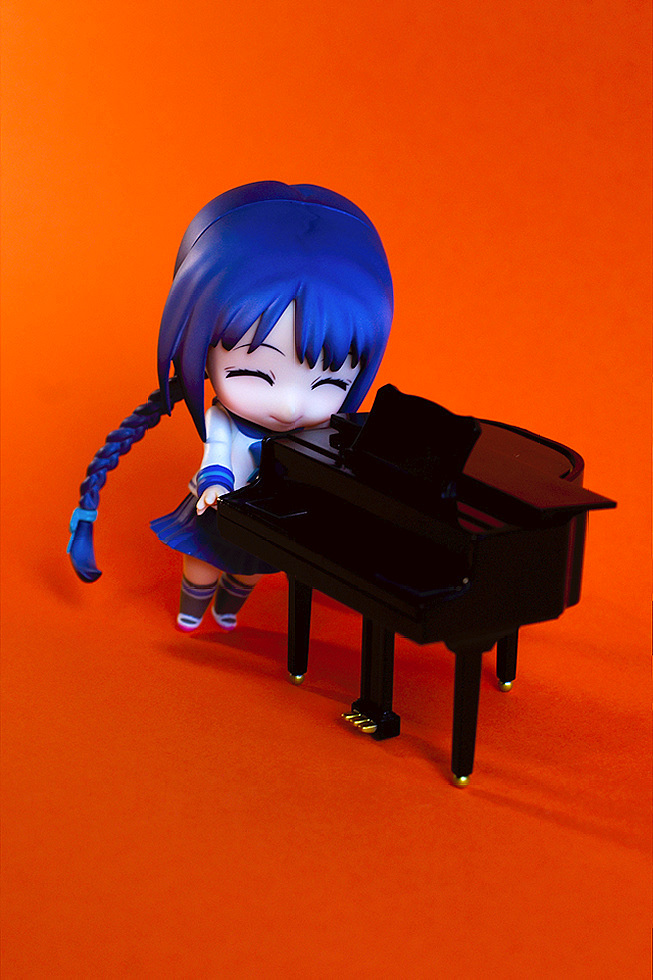 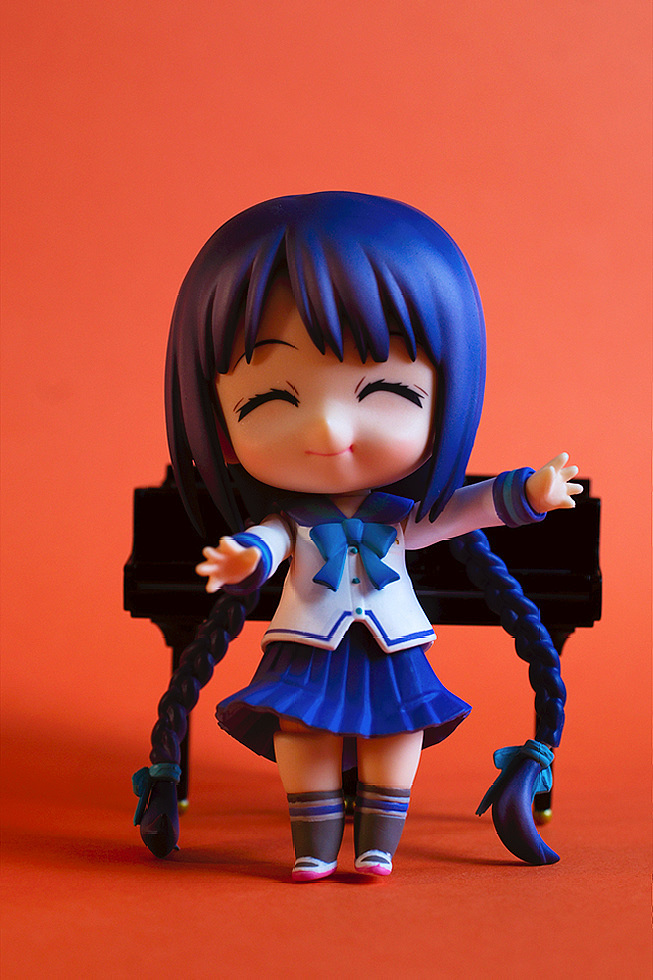 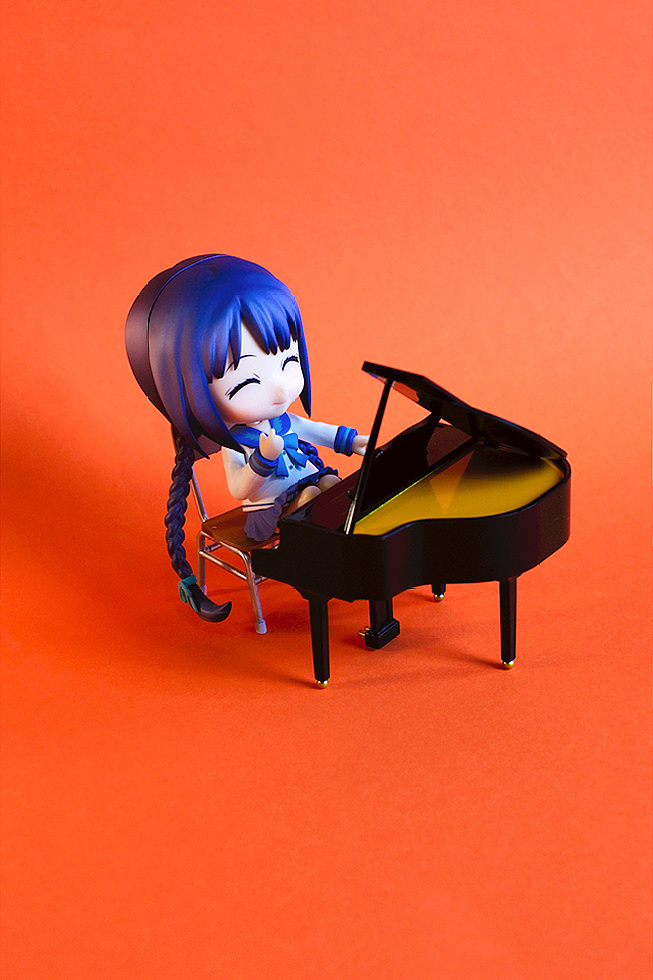 Tooko has three different options for the main posing.

My favorite option is the one where Tookou can sit on her chair. It looks very cute in combination with her paper chewing face. But I miss a second hip part, it is a bit uncomfortable to make the sitting pose, you have take off the standing legs as well as the joint balls out of the hip part and put the sitting legs into the free holes. 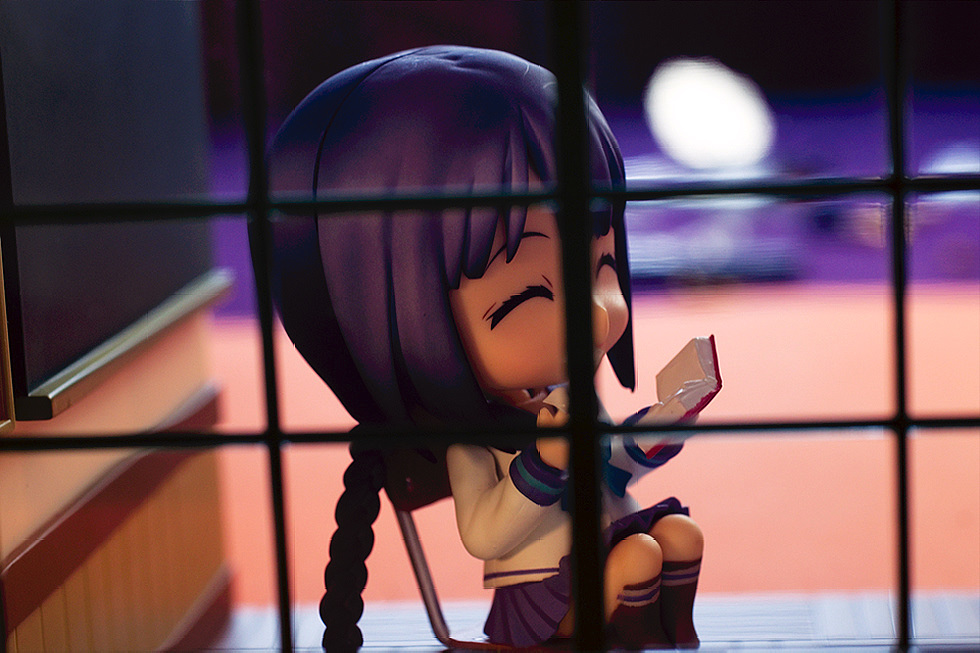 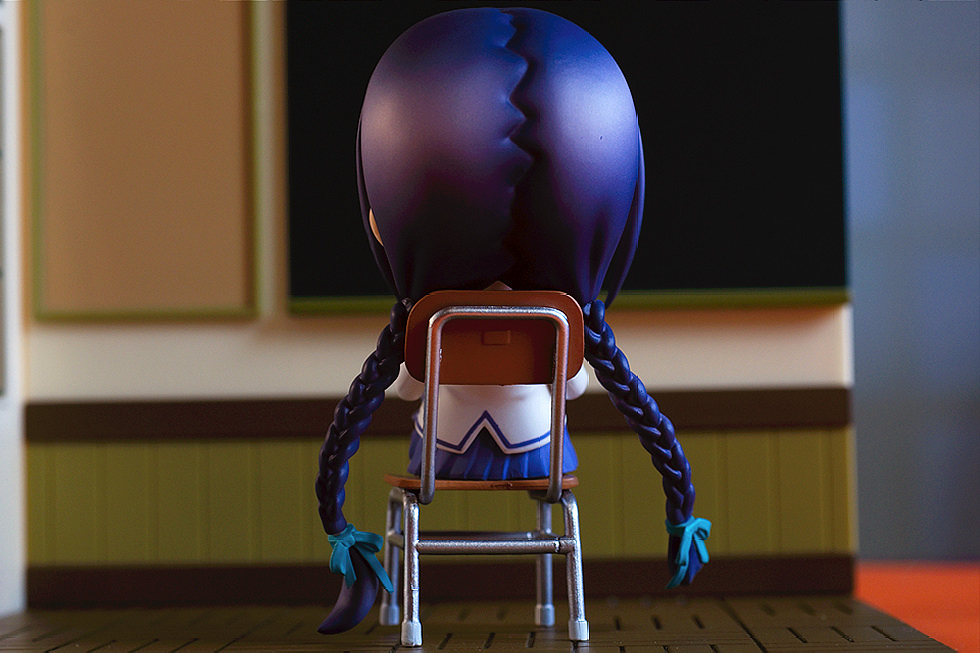 In the second option Tookou can stand.

Unfortunately her braids aren’t enough to support her stand alone so you have to use the base.
As mentioned before I had bad memories with these bases, so I haven’t use it in my review. 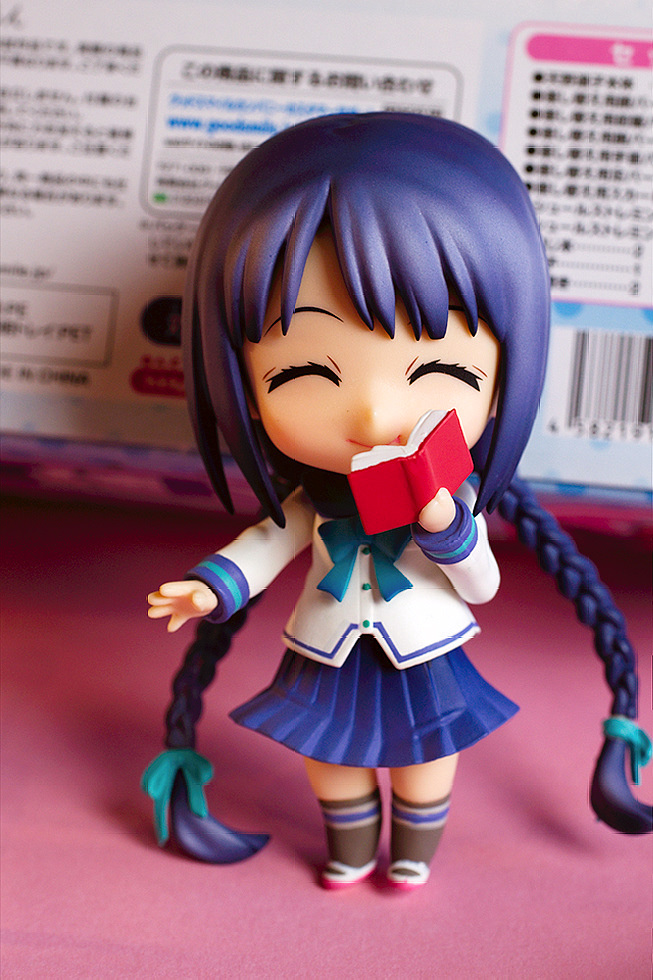 Here is the last and third option, where Tooko is a monster in a Surströmming tin.

Surströmming is a Swedish fish delicacy, which is preserved by acidification, I heard it should smell intense and foul. Bon appetit XD This option looks crazy and hilarious,there are Stickers of a bat and a bull skull, which you can use as decorations for monster Tooko. You can use these stickers a few times they are still sticky even after some usage. 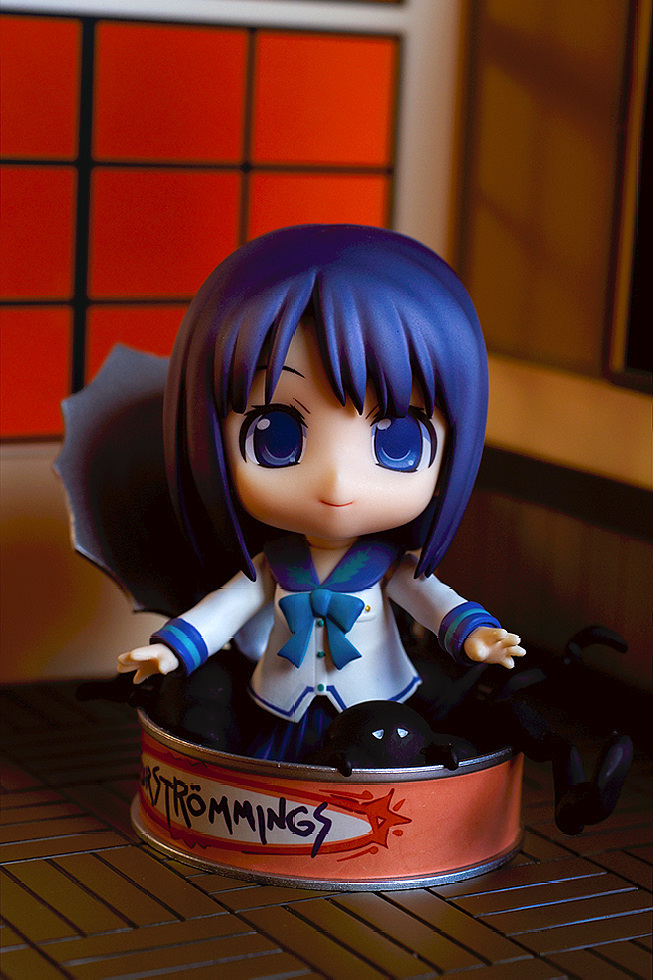 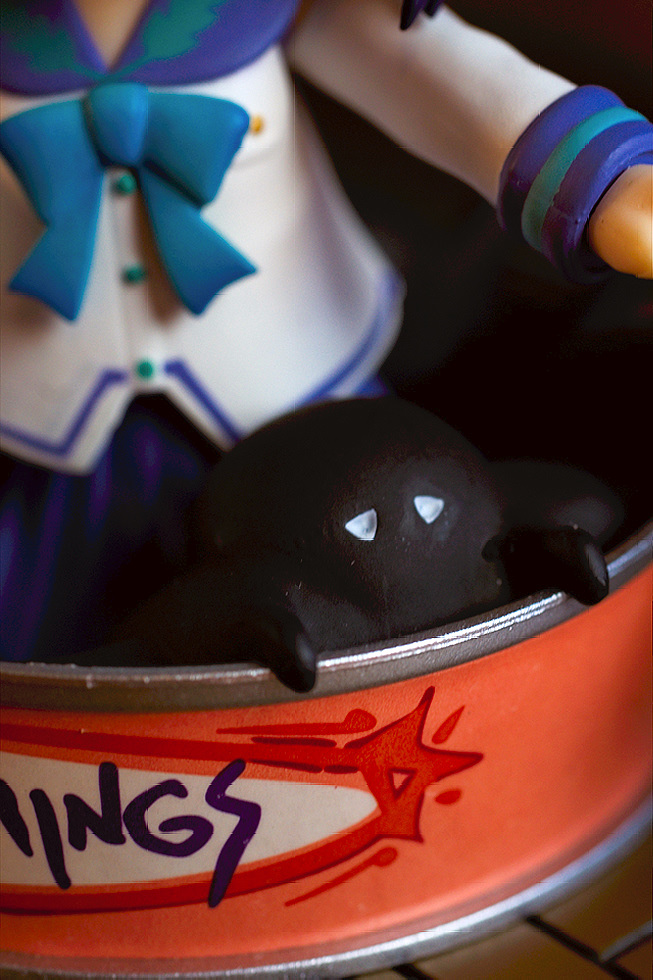 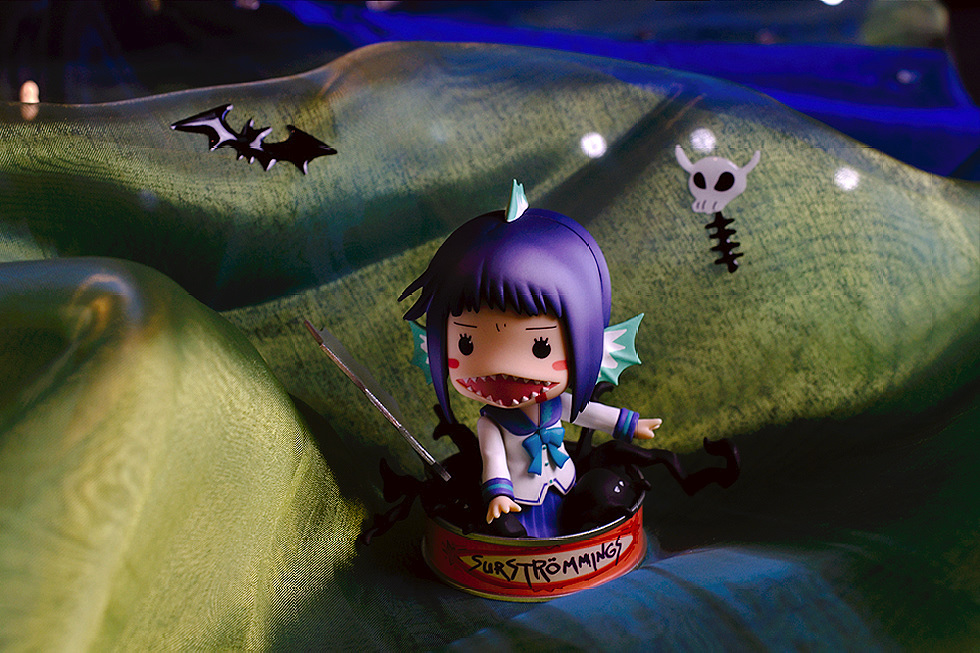 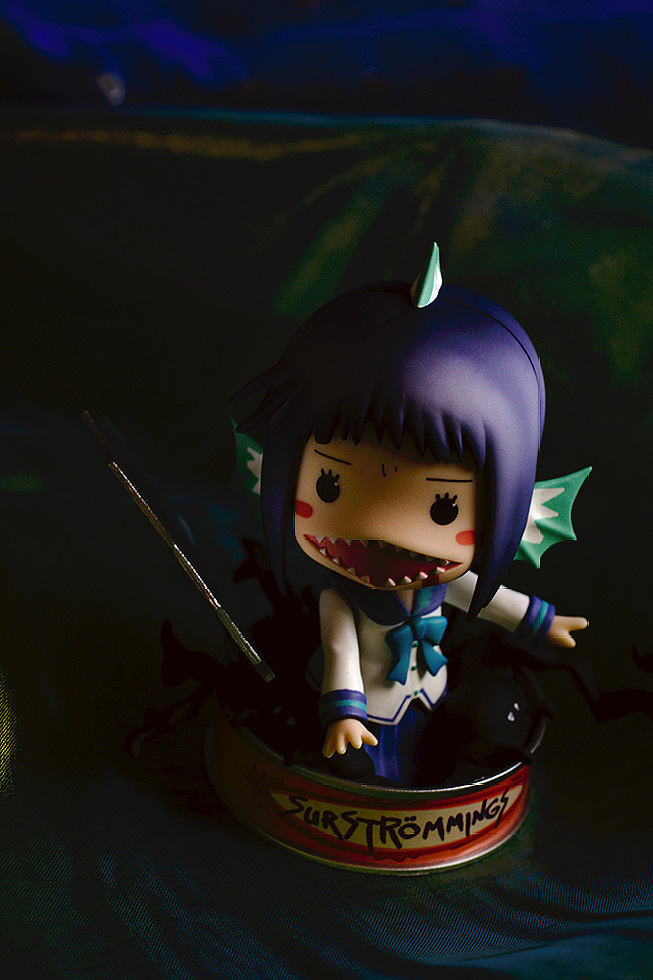 Here is all the stuff  which was included in the box.

As you can see it is a lot there are a few hands, a few books, stickers, 2 spare heads, a spare skirt, a chair and so on. 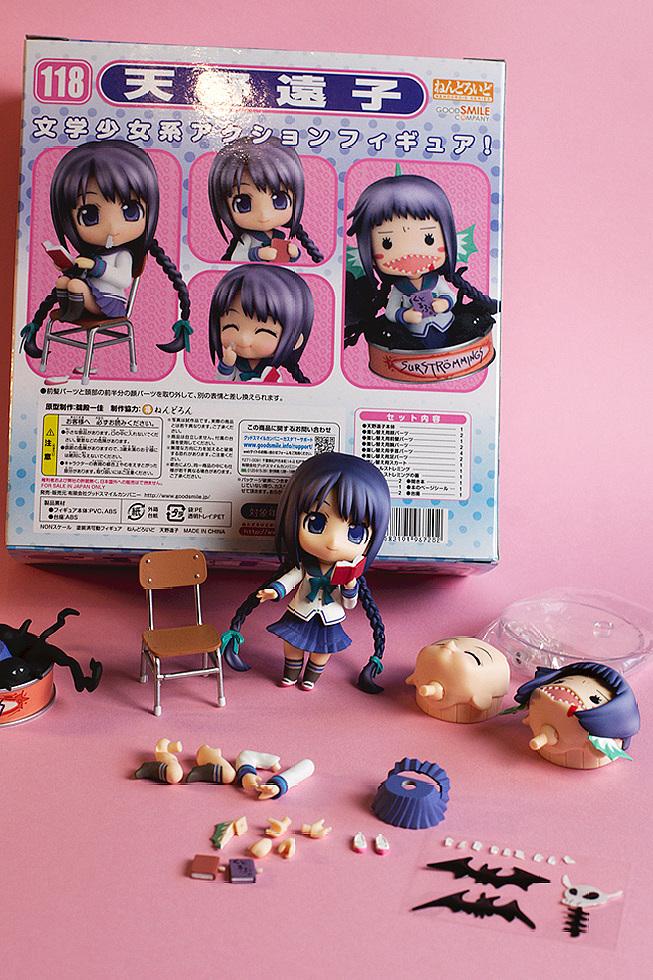 Time for the Final Words
Im not very good at posing but I tried my best to show the good sides of this Tooko Nendoroid. Tooko Amano is a nice and cute figure with a very good quality. Taking pictures of her was a lot of fun especially in her monster option XD If you are wondering about the school room in the background it is the Culture Festival Set A from Phat Company. When you are a Nendoroid fan you shouldn’t miss to get this cutie.