Hi mina-san today I have a new post about the Sonicomi Game, after I already showed you the insides of the limited edition box, this time I will talk about the Game itself. I already finished one of the 16 Endings, so I can give you a few infos, pictures and whatever about the gameplay and the setting, even though I couldn’t understand everything so far.

Sonicomi is a japanese game and these guys from there won’t make it too easy for Gaijin like us. Before installing the game you have to set the locale setting of your OS to japan first.

So now one last step in advance, install the SdActi authentification tool and type in the code written on the SdActi manual. Now the Game can be installed and should start without problems. 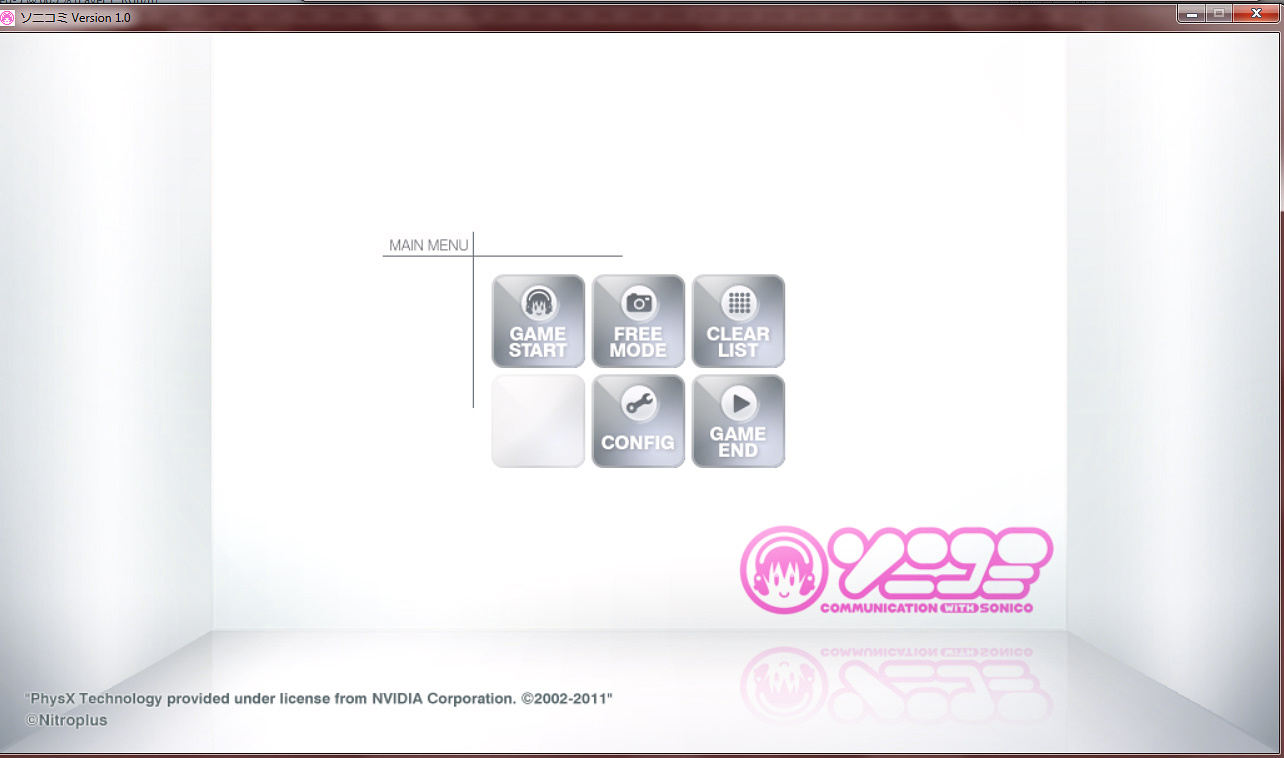 The menu has a nice design and allows a smooth navigation, at first there are three main options, after you cleared one ending two new options will be unlocked, Free Mode and Clear List. 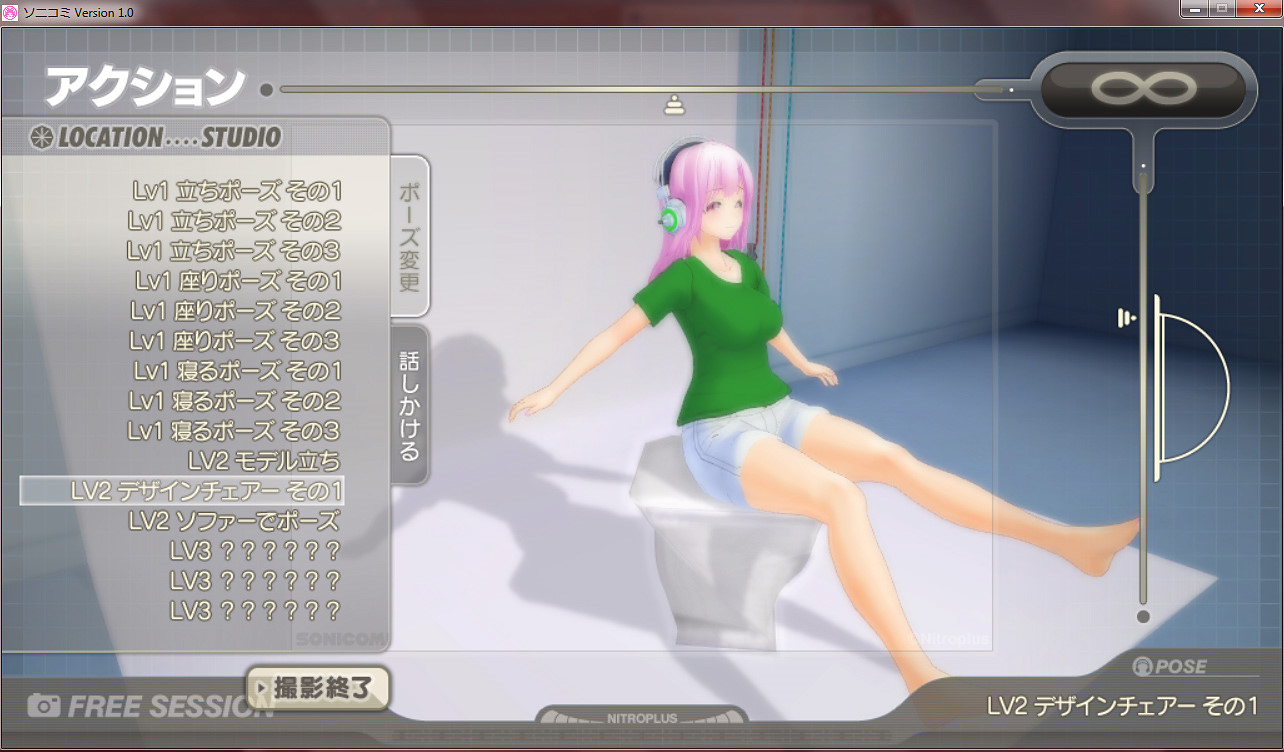 In Free Mode you can take pictures of Sonikowithout time limit or blinking Hud signs, you can dress her the way you want and can use every set you’ve unlocked in the Game.

There is side menu which lets you choose between different posing options, they differ from set to set and you can also trigger certain reactions of Soniko. In this mode the pictures you take are stored on your pc in 560×420 pixels. Clear List is just an overview about the endings you’ve cleared, there are 16 possible endings you also get an overview about the cleared client requests.

The player takes the role of Cameraman-san, like Producer-san in Idolmaster ^^. The player first gets in contact with Soniko on a concert during a failed stage dive of her.We talk a bit with her and say goodbye. The next day we see Soniko again as our model for the shooting. After that her manager is impressed by our job and Cameraman-san end up as Soniko’s official photograph. 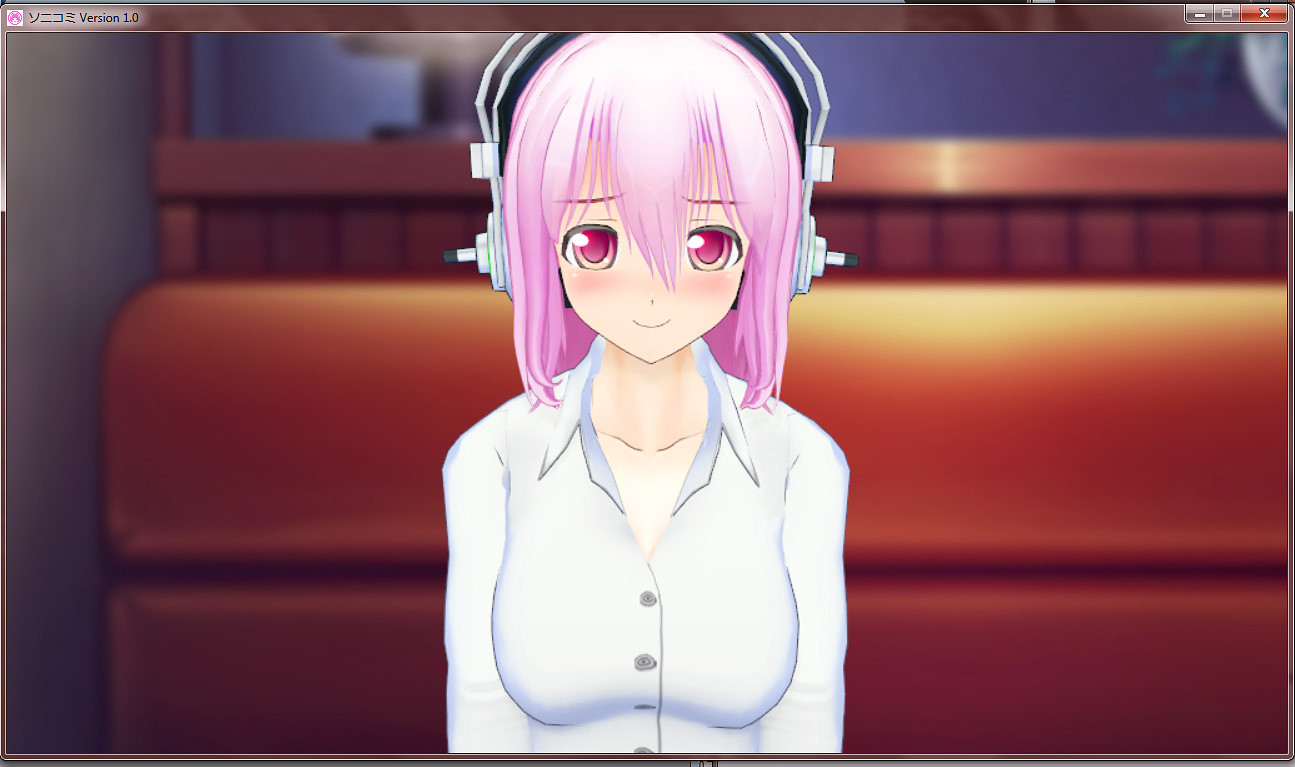 The character of Soniko which most of you might know as Nitro+ mascot or just as illustration is very well fleshed out in the Game; she is cute, kind, a bit shy, sometimes insecure, but she’s also a very happy person. Soniko isn’t portrayed as a dumb sex bomb, she seems to have a real personality. Her voice is given to her by Ayano Yamamoto, a quite unique and cute voice 🙂

There are also other characters like Soniko’s devilish manager, her hot idol rival, Angie Gravite, the clients and so on. There’s also a guest appearance of Danny Choo’s Mirai. 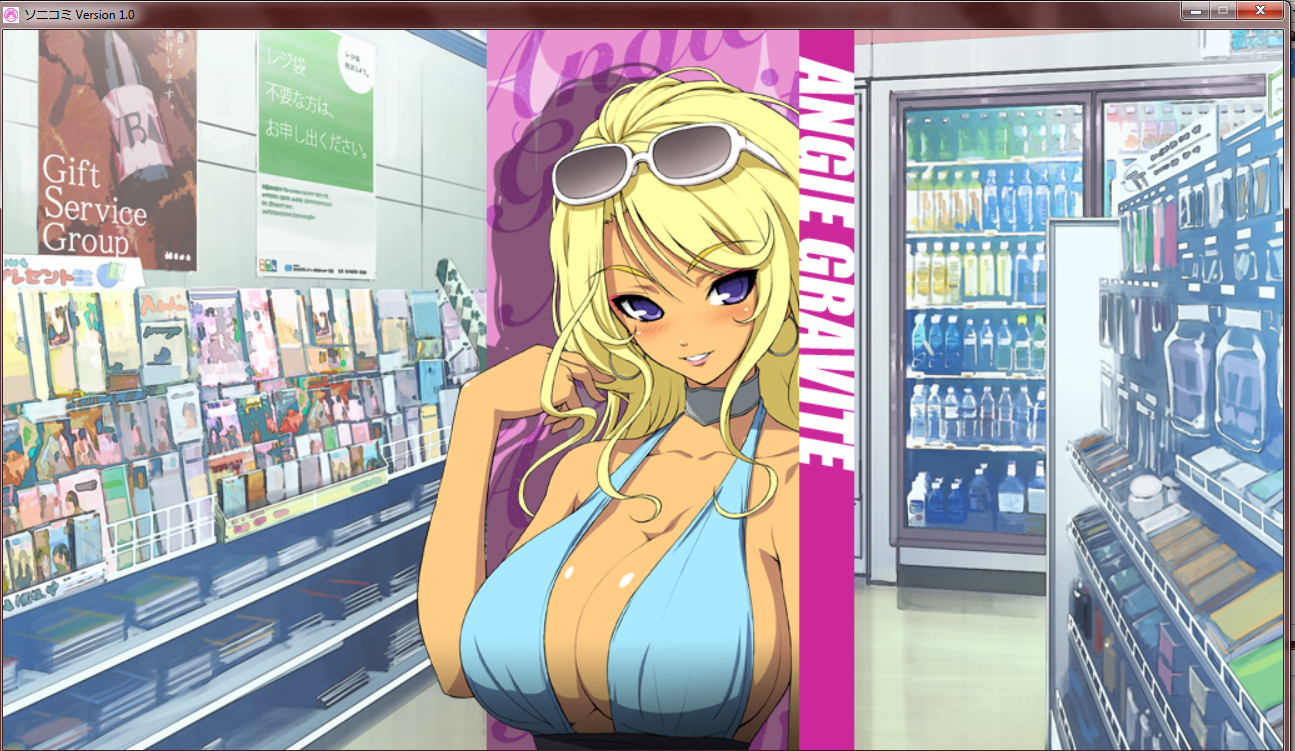 Unlike in most visual novels, the Soniko character is rendered in 3D, while other characters remain 2D. Thx to 3D Soniko can show emotions in a more detailed way, she has lots of different face expression, expressive gestics and a certain body language. The backgrounds are 2 and 3D. 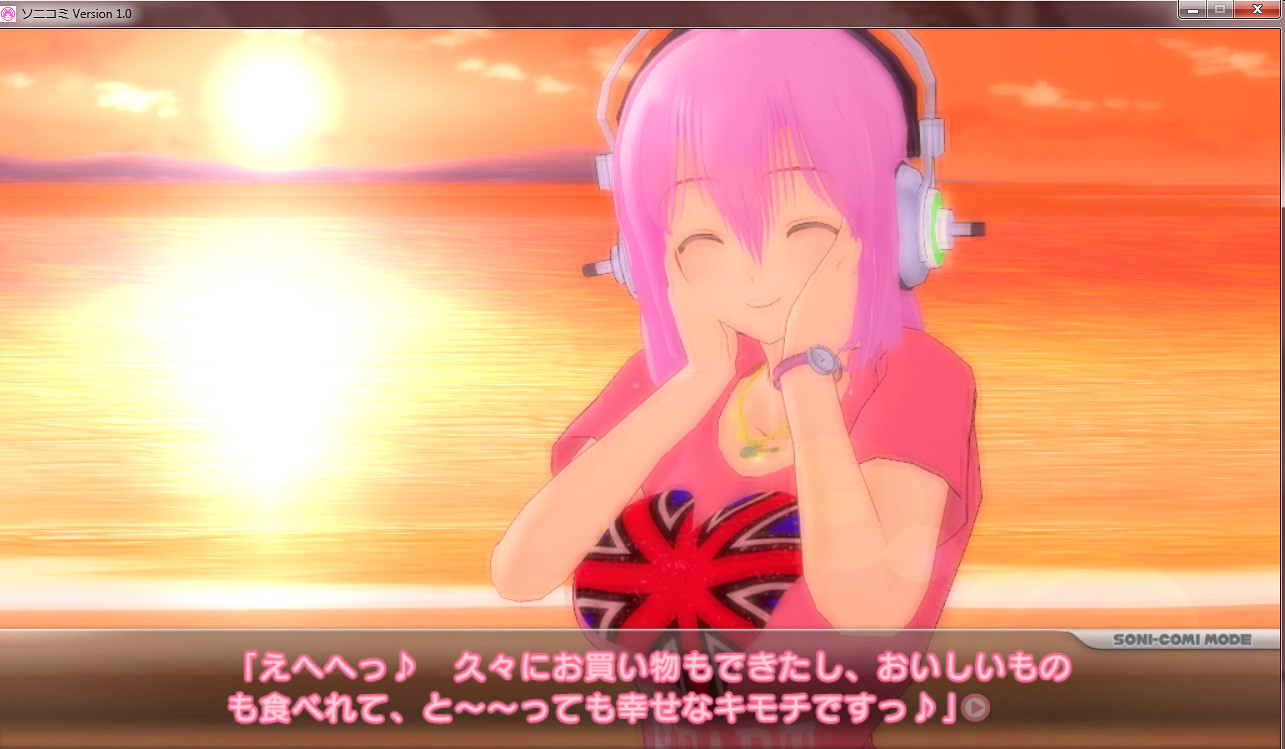 The Game centers around gaining Soniko’s trust and maybe her love as well as supporting her in becoming a fully fledged gravure idol. On several ocassions you can talk with Soniko by choosing one sentences on the screen, you have to click one of the sentences within the time limit.
There are also rare occassion where you can touch Soniko, you can click the spot where you want to touch, I don’t think she would like it, if you suddenly touch her boobs, not that I’ve tried it ^^. 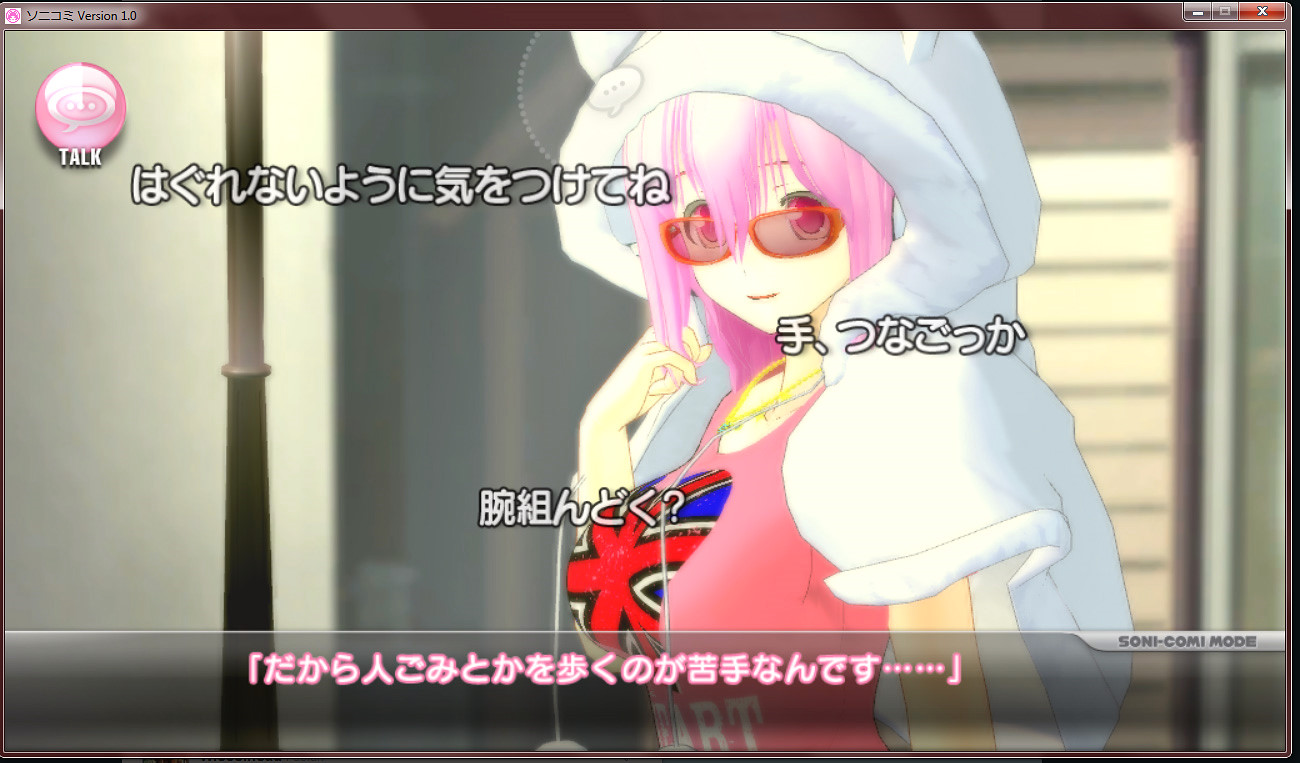 The routes in Sonicomi are decided by the answers, actions and decisions you choose,the style of the outfits you give to Soniko are very important as well as the succes in the photomissions.

The action part of Sonicomi are the photomissions, where you do shootings with Soniko for several clients, the missions are divided into selecting the location, choosing a matching outfit for the clients request and doing the shooting. There are many different clothes and accessoires you can choose from in many colors and designs and more stuff can be unlocked during the game. 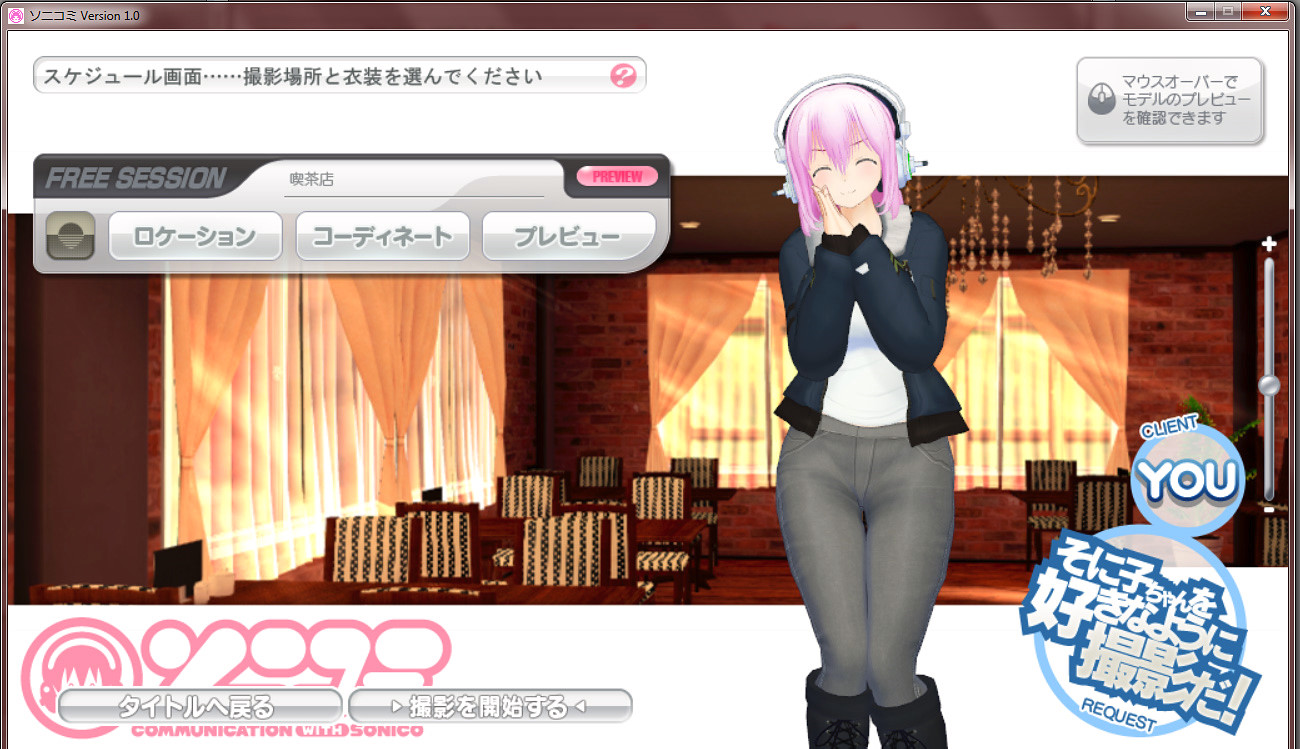 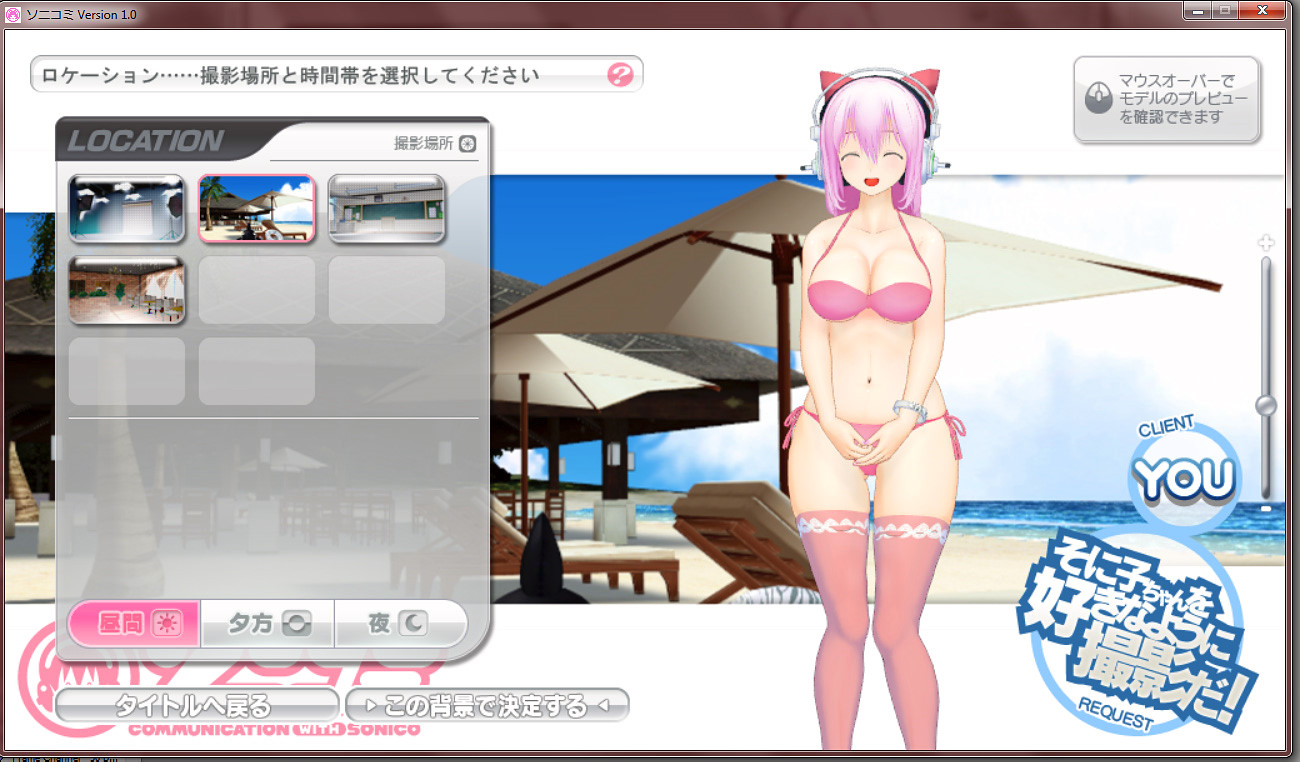 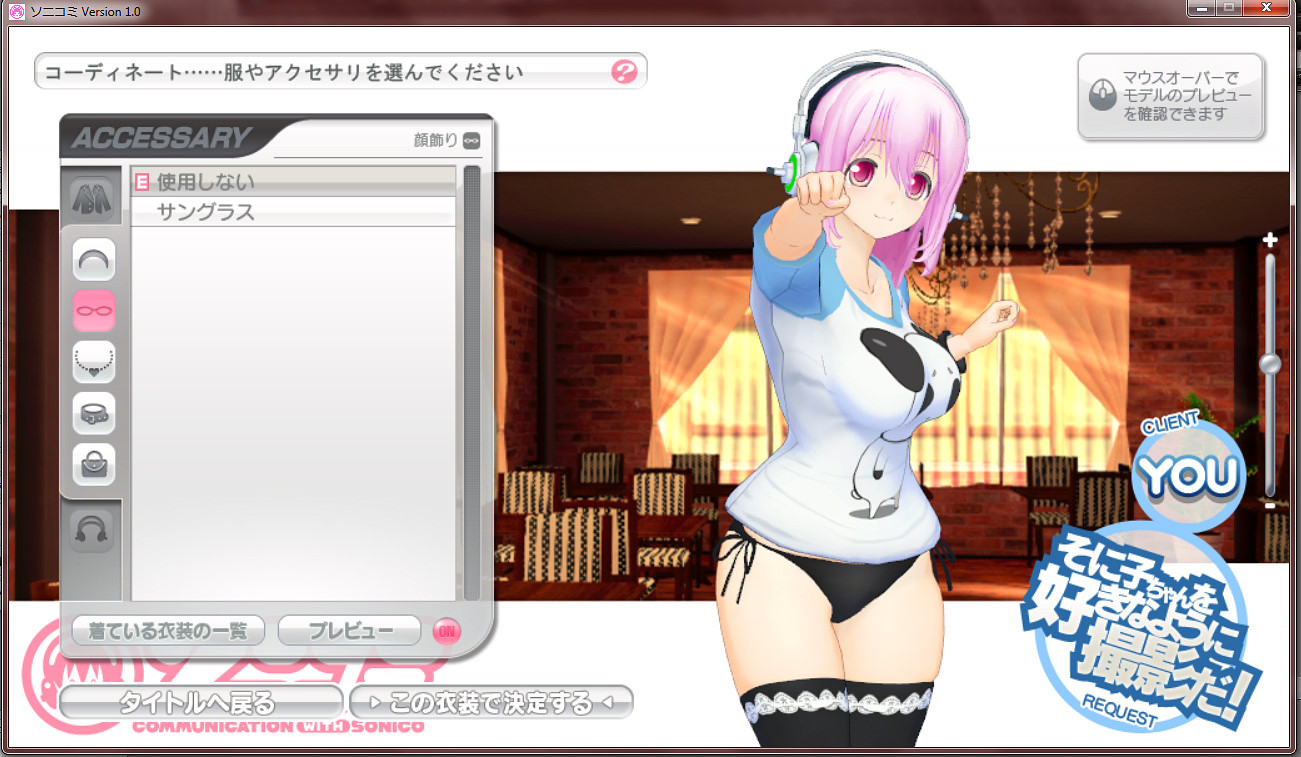 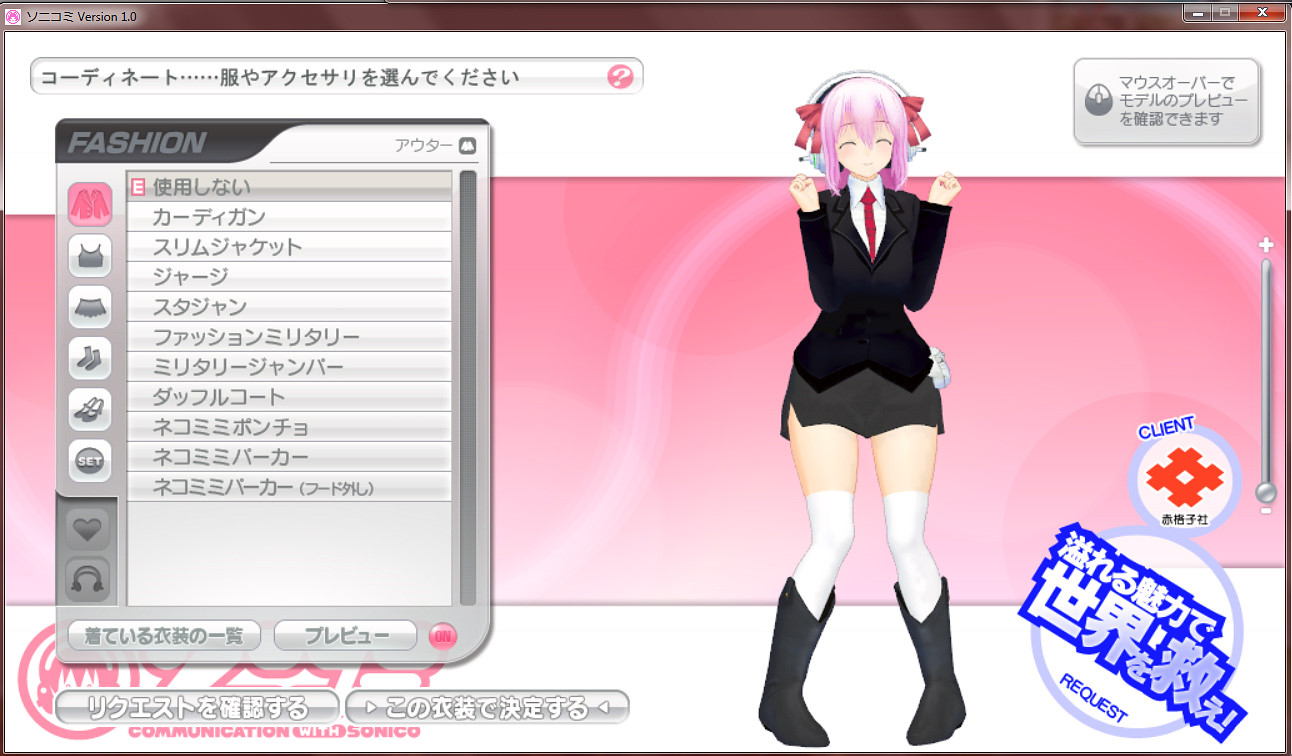 Soniko shows different reactions to your choice of outfits and helps you with choosing the right outfit, when she jumps in the air and raises her hands you did a good choice and can go straight to the shooting. The controls are similar to an egoshooter, you can move with the WASD keys and aim with the mouse, with the space key you can crouch and with X and C you can rotate the camera and a few more keys, in the mission you’ll probably be too busy too use all these keys.
The ENTER key is helpful when too many targets appear at the same time. It will clear all the targets at once, however you can use this key as long as camera symbols (D) remain in the bar. 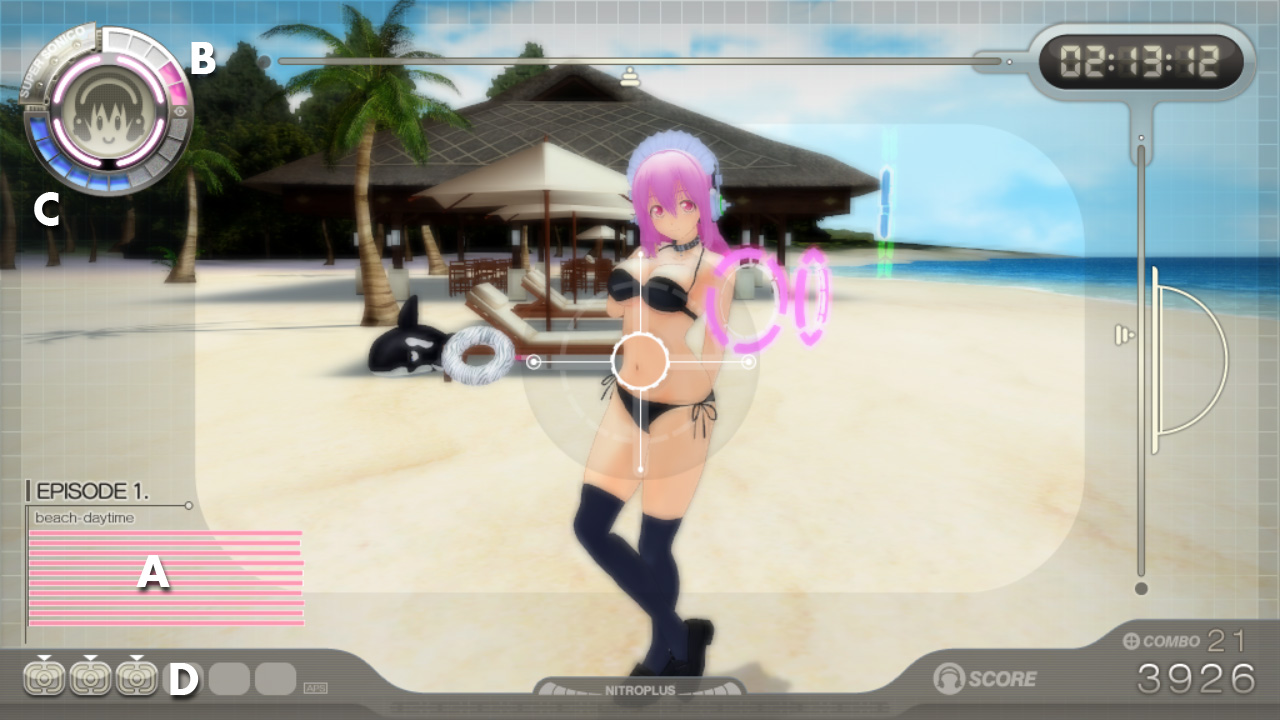 You have to hit all the circles within the time limit, for getting better scores you should wait until the circles turn pink. When the stamina rows (A) turn pink you have to hit the right mouse button, a menue appears, where you can scroll with the mousewheel, motivating Soniko can be done by selecting the speech bubble, everytime you do this the motivation meter (B) goes up.

When it is full Soniko goes into action mode and strikes more dynamic poses which give you more chances to improve your score. You can even give her a short break to recharge her energy meter (C), which is neccesary during most shootings, without energy the shooting will be over. With another option you can let Soniko change her pose, from standing to sitting and lying down. 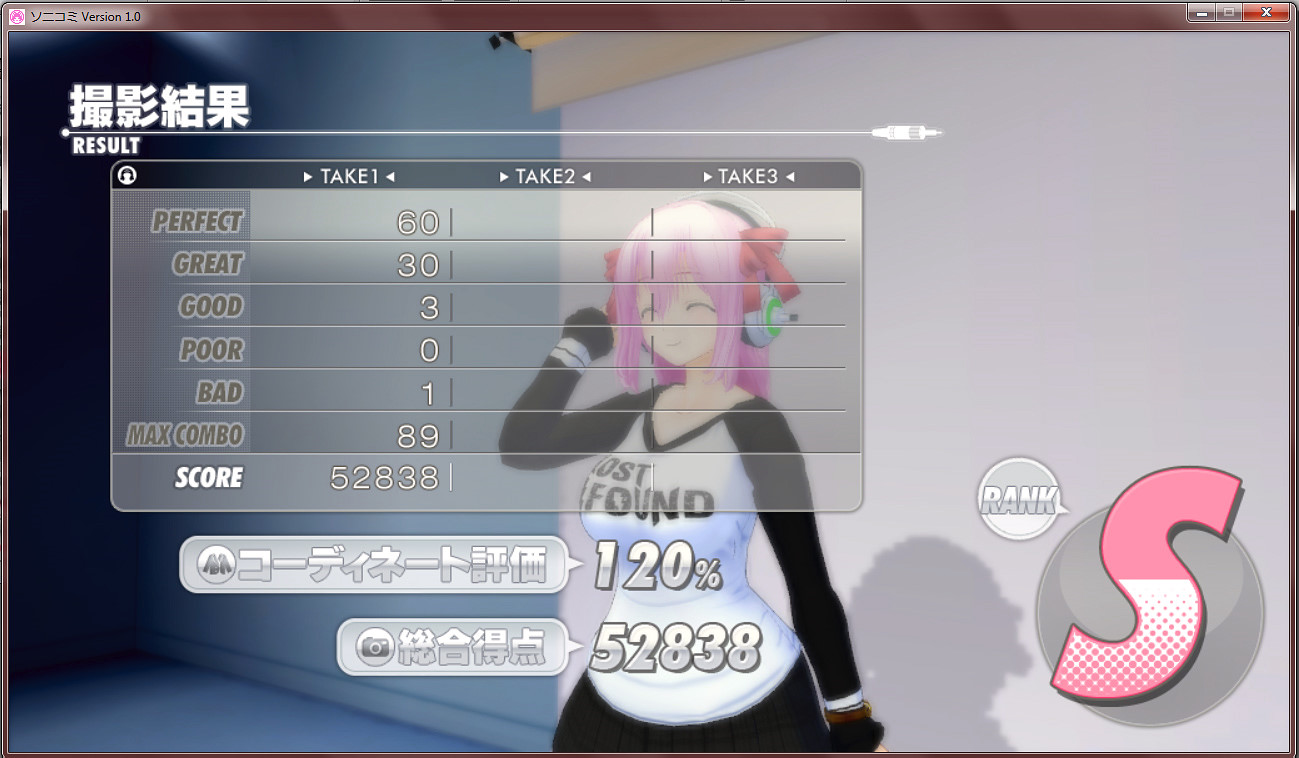 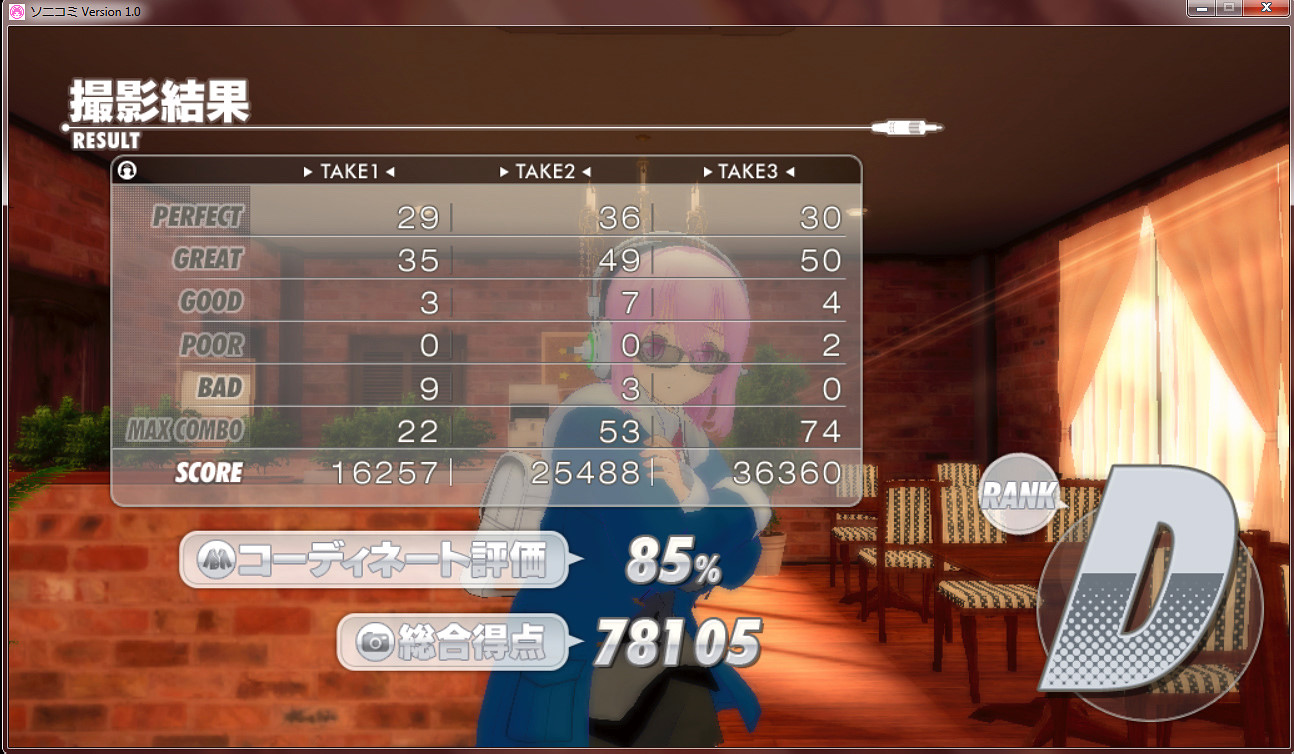 When the shooting is over you can see how you performed and how accurate your chosen oufit was, you can score SS, S, A, B, C, and D. D is pretty bad and will always give you a Bad Ending, it can be quite frustrating when you fail like this and it makes Soniko sad 🙁

The visual appearance in this Game is a mix of 2D and 3D, during normal story Soniko is always 3D, the other characters are just 2D. In the photomissions everything is 3D. Soniko has some kind of cell shading and her motions are very refined, so she proably was rendered via motion capturing. The physix engine is responsible for the flow of her hair and the breast movement.

Sonicomi also makes use of effects like HDR, depth of field, soft focus and 8x anti aliasing. The effects are adjustable in different steps, surprisingly my machine can handle it at high quality. 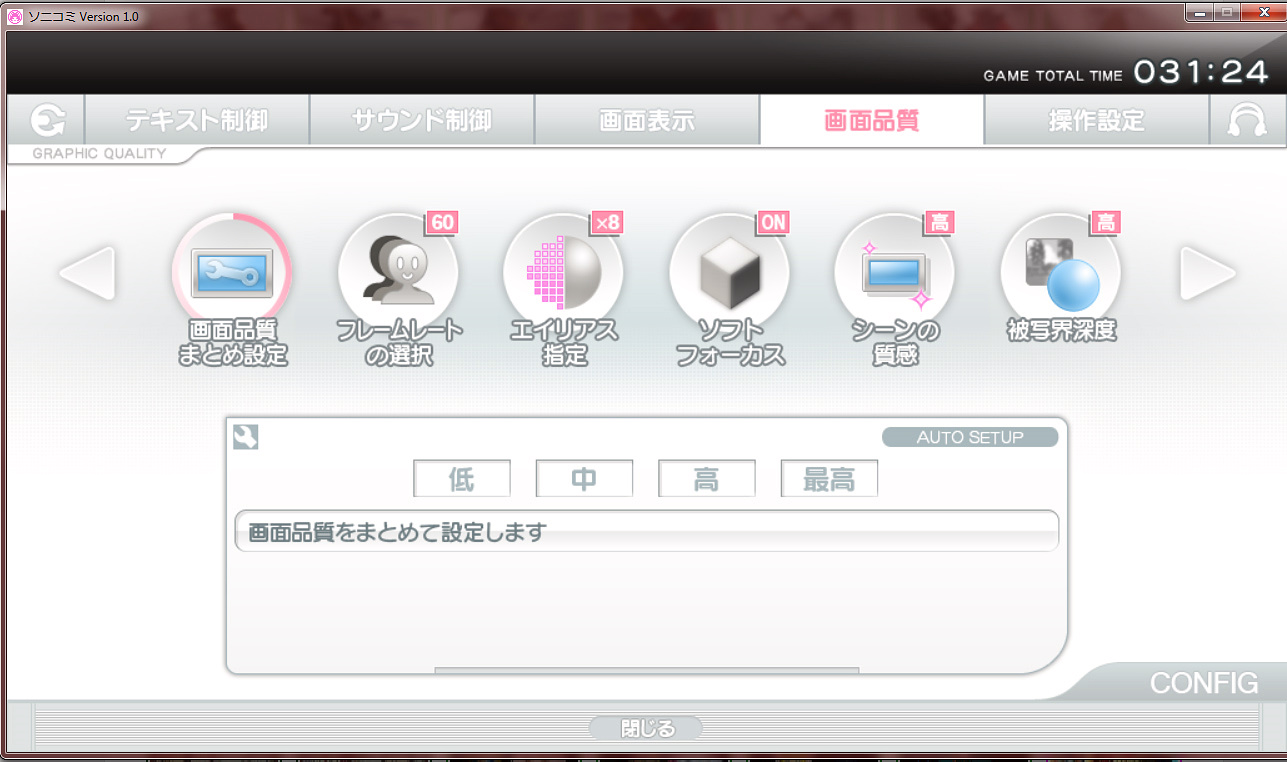 The Game has a nice look, but there are a few flaws, the objects in the photomissions would look better with more detailed textures and also a few more polygons would have been nice, since some things appear quite chunky in the sets of the photomissions. Sometimes there are also a few clipping errors where Soniko’s body and her clothes intersect in a strange way.

The Soundtrack is cool, especially the theme song and the BGM, as I already said Soniko has a cute voice, but it’s a shame that the other characters have no voice.

Sonicomi is a nice Game and Nitro+ did a good job in giving their mascot a cute and likeable personality, in fact she is totally enchanting ^^. The story(at least what I understand from it) is nice and with 16 possible endings this Game offers a lot of playtime, even though I always ended with the same end so far, it’s quite tricky. The action part called photomission is fun and a curse at the same time, dressing Soniko in different fashion styles is fun even if you are restricted by the wishes of the clients and by Soniko’s reactions, quite a picky little girl ^^.

New clothes can be unlocked during the Game, there are a lot of different clothes and accesoires. The curse side is that the controls are not very precise during the photoshoot, maybe my mouse or I are at fault but sometimes it’s frustrating if you merely missed a target circle and the combo is corrupted, in my opinion the mouse aiming is a bit laggy. Another point of critic are the few save points in the Game, you can’t save before important decisions and you can’t save a certain outfit you’ve put on Soniko, the Game just allows you to save before a photomission and shortly after a photomission in most other visual novels you can save wherever you want.

I guess I couldn’t understand everything about the Game, because I can’t read a single japanese sign and AGTH won’t work so far, but that should be my impressions about Sonicomi from what I’ve understand, thx to years of watching anime I can at least understand some words Soniko says. Anyway the Game can be a lot of fun because of the interaction with the cute 3d Soniko. 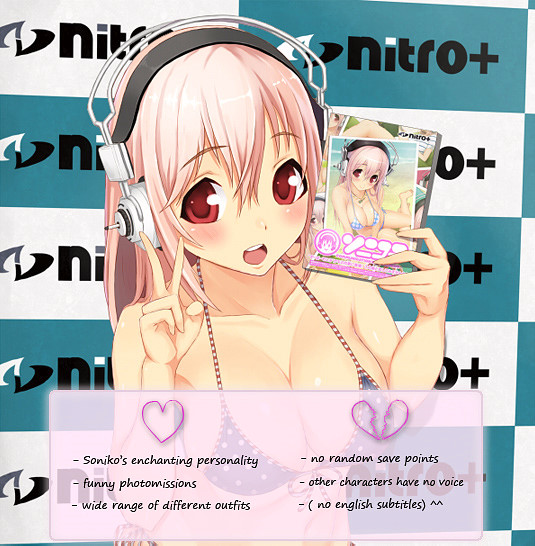 If you have any questions about the Gameplay or the Game itself, feel free to ask me ^^

A trial version can be found here, for the 2.0 Version you also have to change your locale.