Hi everyone, today I can show you a review about Shikinami Asuka Langley from Max Factory, this figure is scaled 1/6 and has a height of 275m. This Asuka is called Test Plug Suit version because Asuka wore it in Evangelion: 2.0 You Can (Not) Advance. Asuka was released in the middle of December, I’ve ordered her via SAL shipping to save some money, I was actually a bit scared about EMS shipping for a 1/6 scaled figure and so I just received her a few days ago.

I am a big Neon Genesis Evangelion fan, it was the the first anime I knowingly watched and Im thankful that it lead me to the enjoyable world of anime. In the first place I liked the setting and the story with the cruel angels attacking mankind, but it took me some time to get warm with the characters, I would say in the first series which aired in 1995 Misato was my favorite character, the teenage pilots seemed a bit suspect to me with their mental problems and awkwardness. 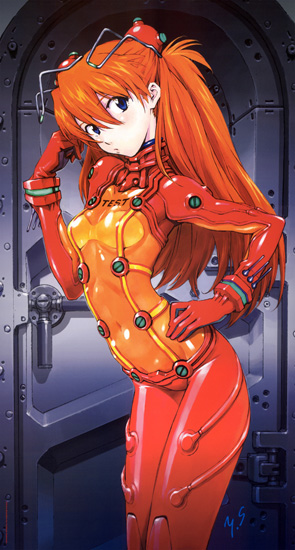 With the latest extraction of the franchise, the Movies; Evangelion: 1.0 You Are (Not) Alone and Evangelion: 2.0 You Can (Not) Advance, my impression about the characters changed a bit.

I started to like Shinji, Asuka and the new girl Mari. While beeing a big fan, so far I had no scale figure of any NGE character, under these hundreds of already released figures I found nothing what I really wanted to buy. Ok, I once bought the Asuka Apron version from Wave which was nice for a 1/10 figure, but it turned out not to be a figure that I wanted to keep in my collection.

At winter Wonfes 2011 Max Factory presented a new Asuka figure in the Test Plug Suit and I instantly fell in love with her design, the pose and the cool face expression, simply everything. 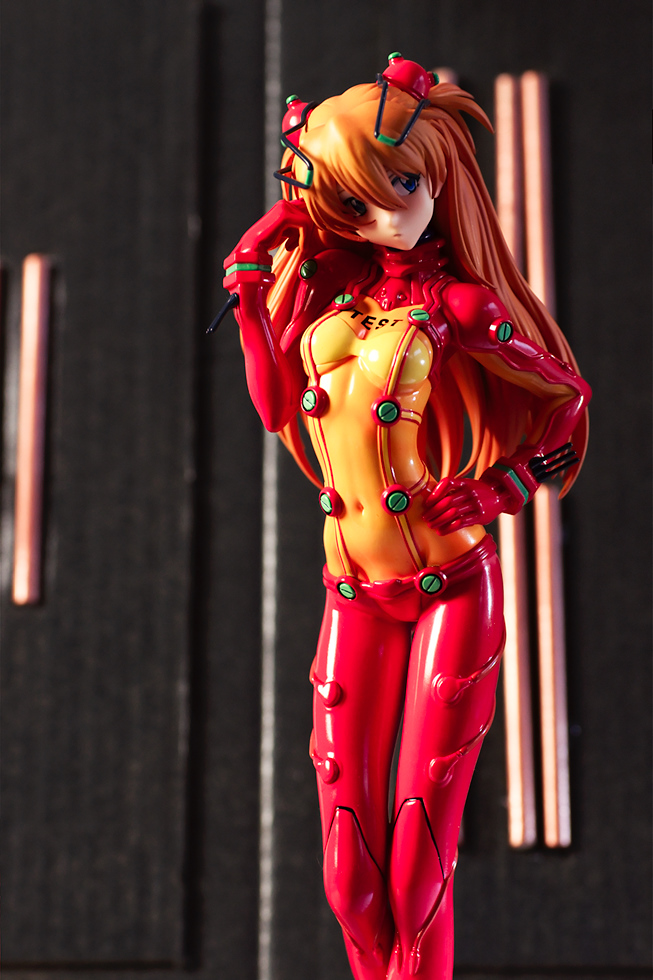 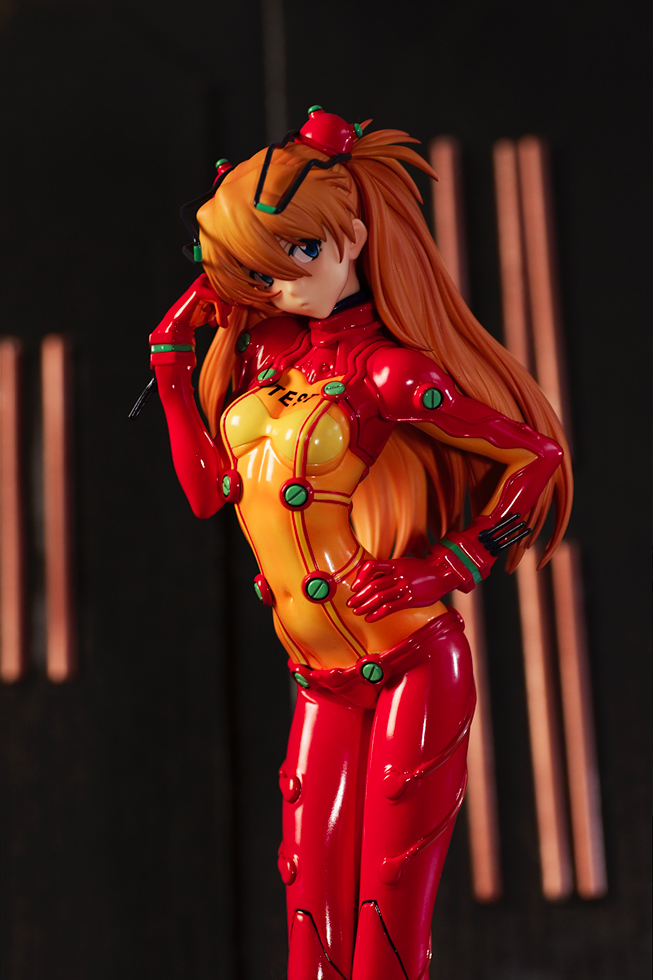 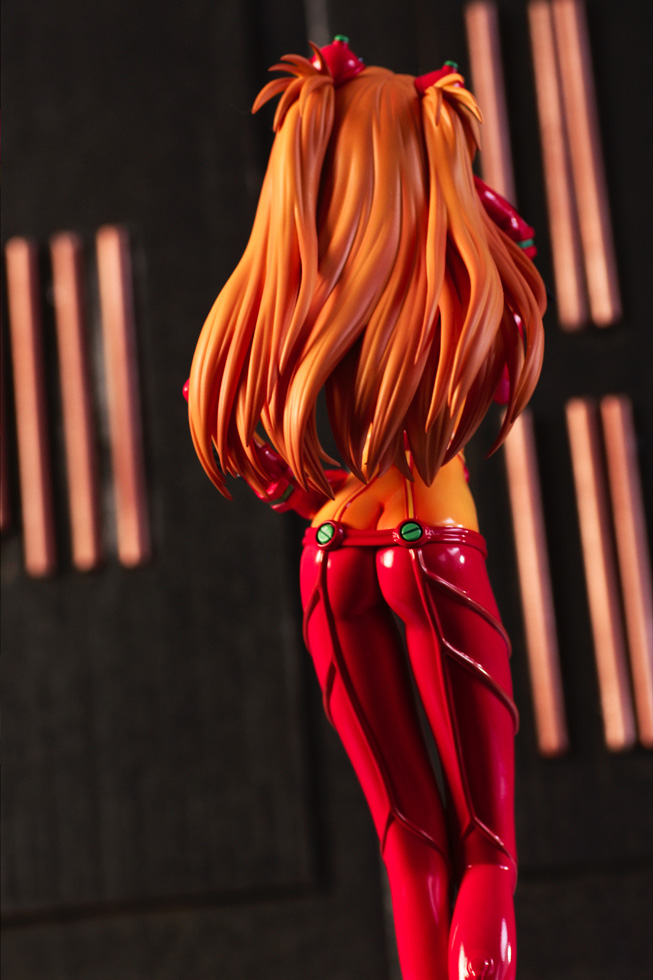 As I unpacked Asuka and had her on my desk for a few hours I was really impressed about this figures quaility, she looked even better than I already expected. Well done Max Factory, well done.
I could declare the review as finished now, but I guess you would like to know more about her.

Asuka has magnificent hair, the light fox brown hair has nicely detailed strands and shows some good darker orange shading, I really like the way, the strands of her hair cover parts of her face and just look at her ears ^^. The hair is sculpted and painted very well, on very close view there are some tiny paint blobs on my versions hair. The head of this figure is slightly tilted down and turned to the left. Asuka is sculpted after an illustration from Sadamoto Yoshiyuki, as you might notice its not the edgy design from the anime and movies, her face appears more soft and round. 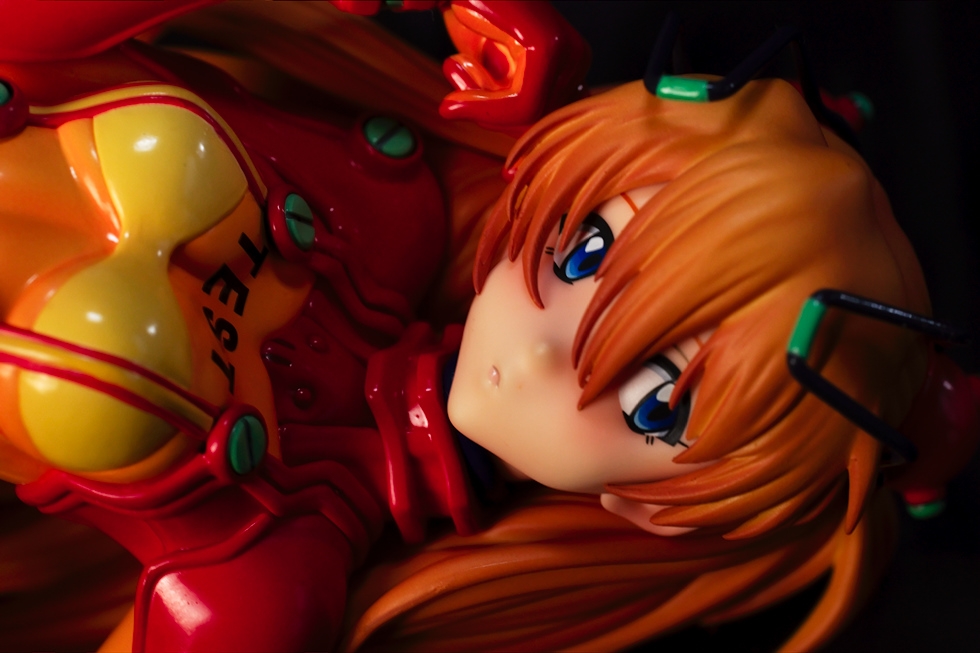 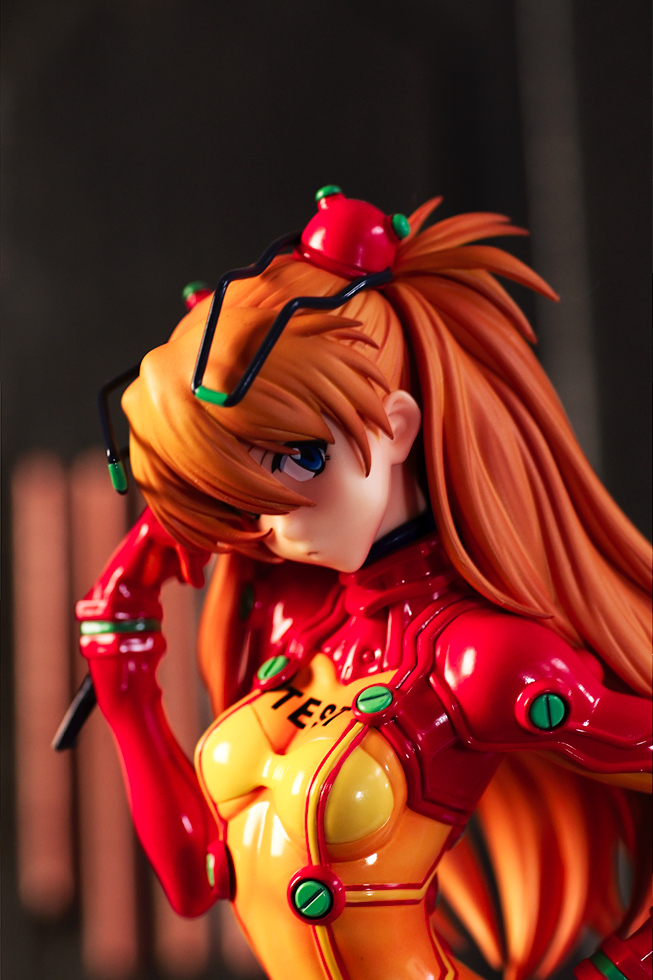 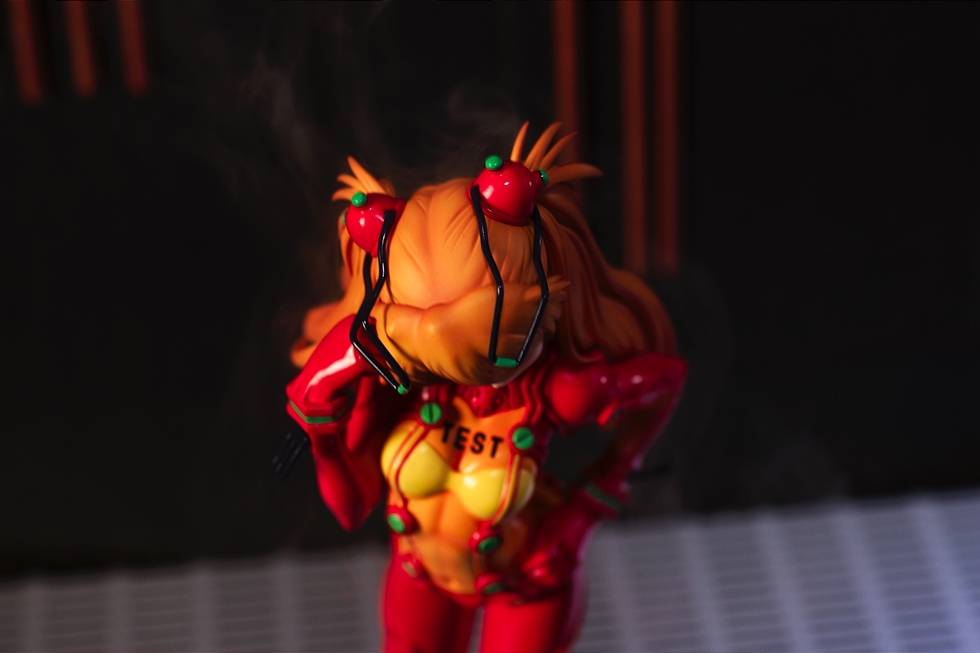 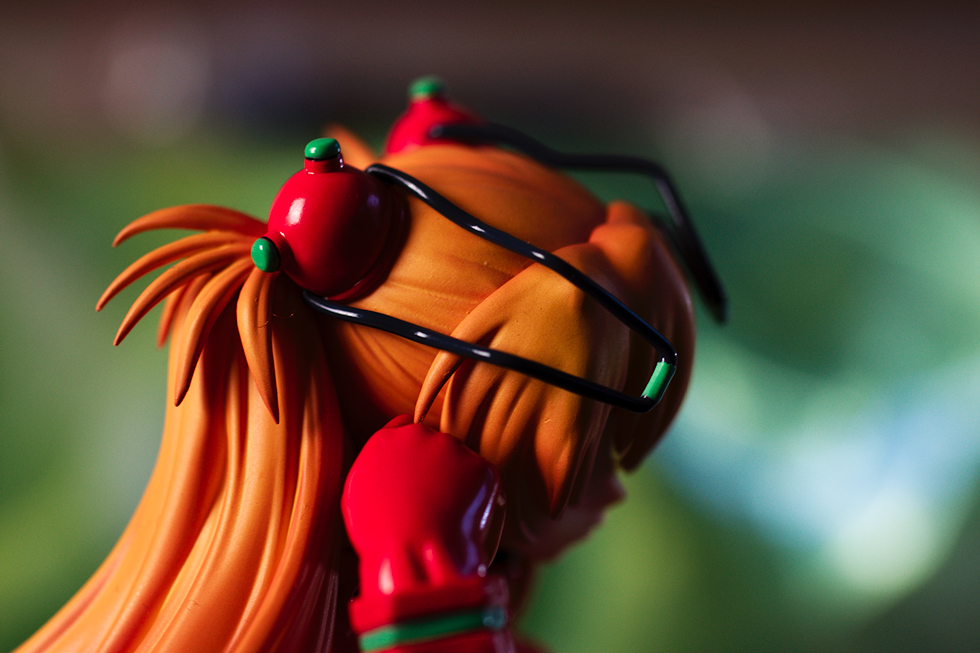 The face expression is a mix of cute pouting and slightly embarrassement. The clear blue eyes of her are pointed to the left which underline the interesting expression. The faint blushmarks under her eyes are another nice detail. A few other things which make her face so pretty, are the snub nose and on close view the light pink area inside the small opening of her cute mouth.

In Evangelion 2.0 Asuka had to pilot a new unit, Eva 03 and got a new suit for that mission, there were mixed opinions about the suit, like being ugly, too sexy and so on, I think it is a nice design.
The orange area in the middle of her plug suit fits very well to the mainly red parts of the dress.
The glossyness of her entire suit looks beautiful and has a futuristic look. The transparent look of the orange area gives her a sensual look, since the shine through skin is very well recreated. 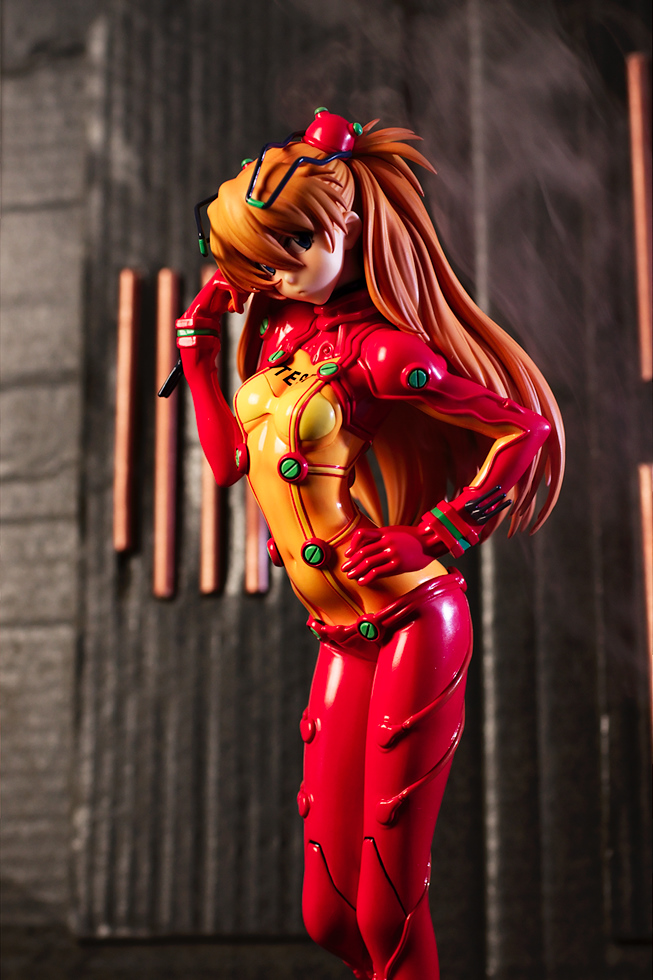 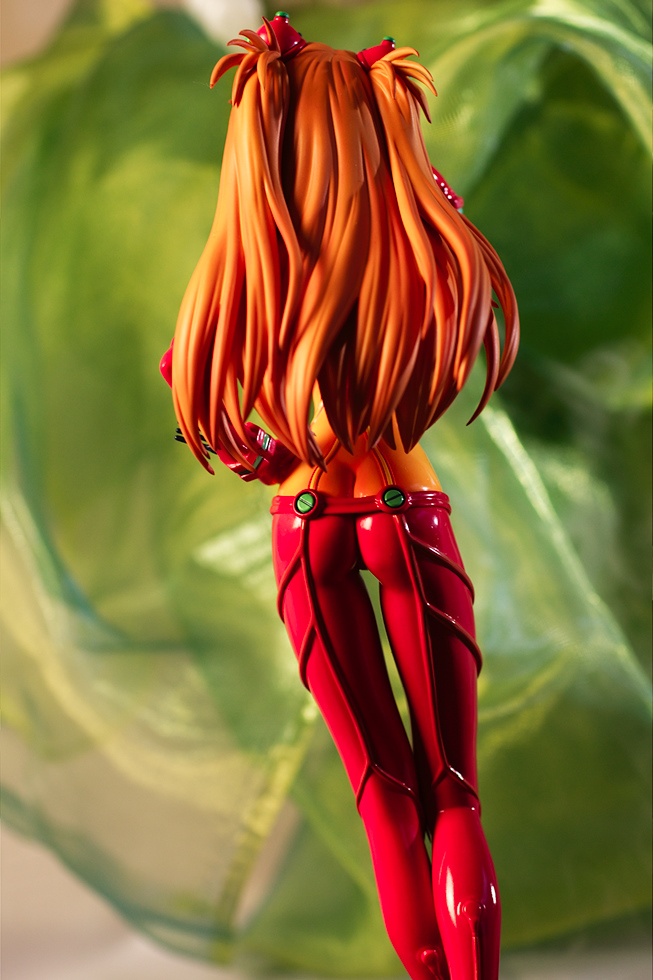 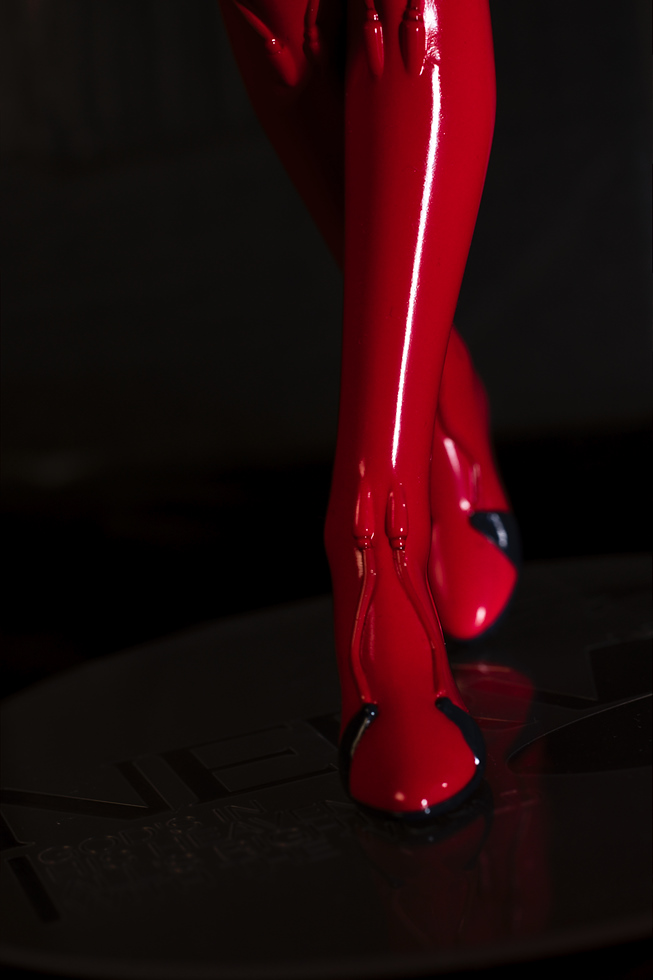 On certain areas of her suit you can see cable connections and green buttons incorporated, both are interesting details, that spice up the look of her suit. The skintight fit emphasizes Asukas beautiful shaped buttocks, the upper half of her butt is covered by the light orange part. 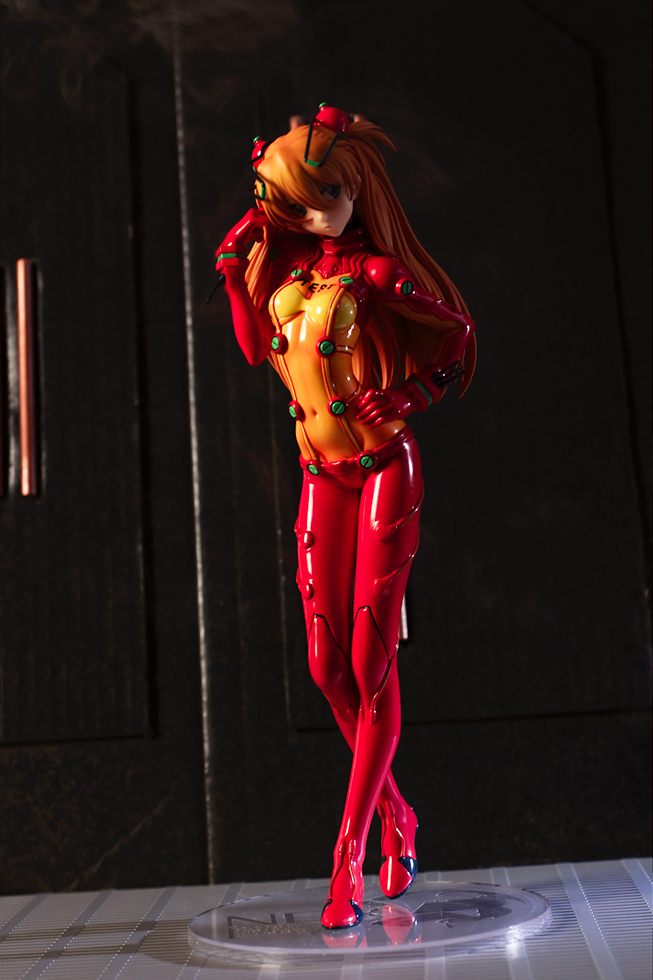 The sculptor Chieri who also had his hands on other figures like Chie from Native, the Tony version of Hatsune Miku and another Evangelion 2.0 character, Mari from Max Factory.
Chieri did a respectable job with Asuka as well, she is supposed to be 14 years, but man she already has really nice curves in this figure incartion. Aside from being sexy this figure looks gracefully in her standing on one feet pose, she has very long legs and has a tall appearance. 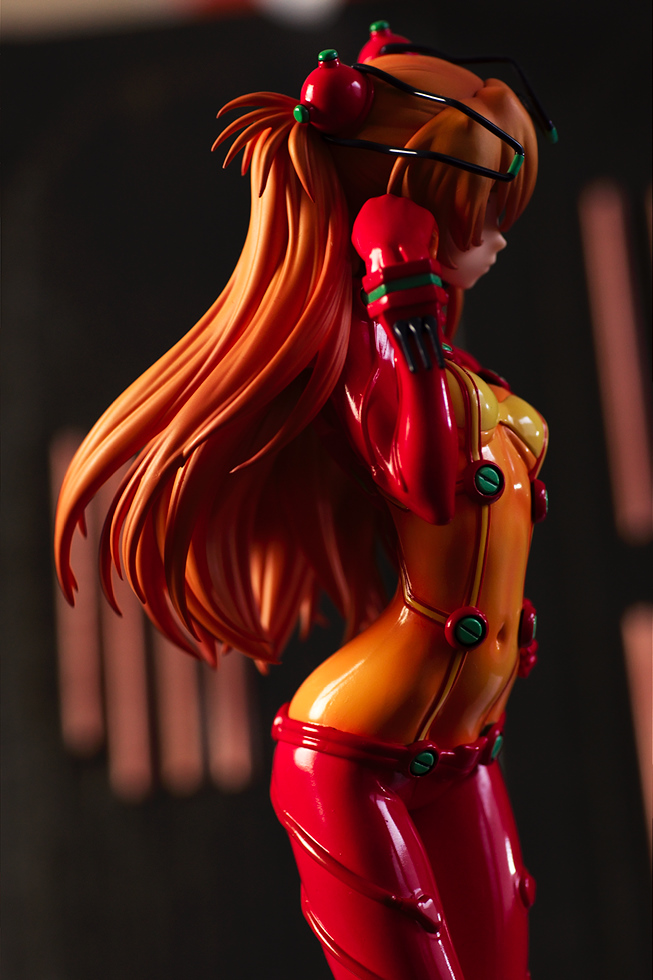 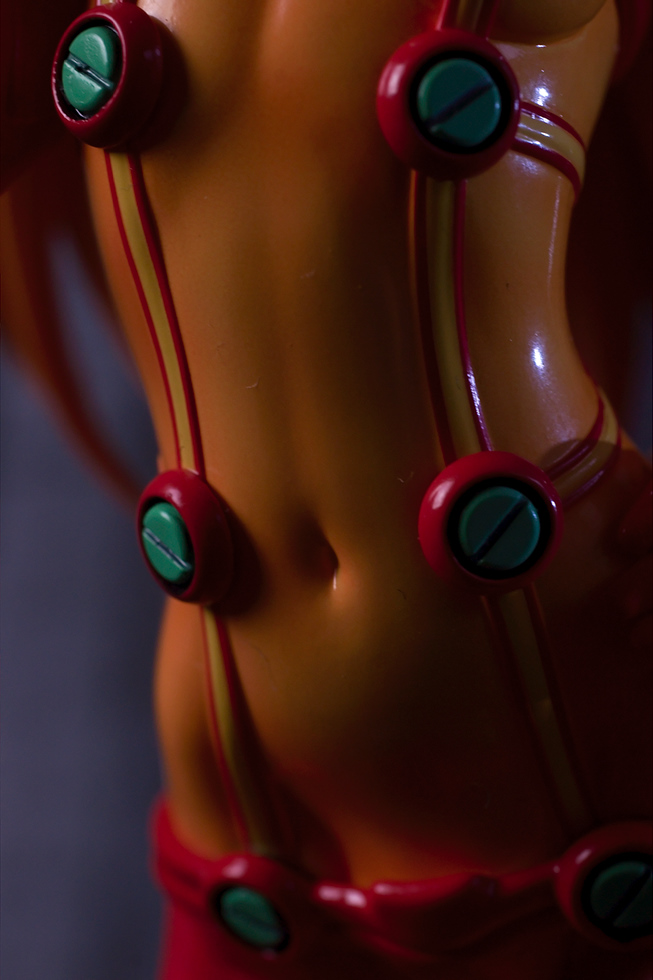 Asuka’s body features a lovely arched back, a gorgeous waistline, a nice belly and very well defined hips. From the backside you can admire the beautiful hair and the very well defined back. She appears to be too pretty to be put in a entry plug of a Eva unit to fight cruel angels ;D

1/6 seems to be the perfect scale for this figure, the body and pose of Asuka really start to shine in that size, at the moment she is placed on my desk and I can’t take my eyes off her ♥♥♥♥. 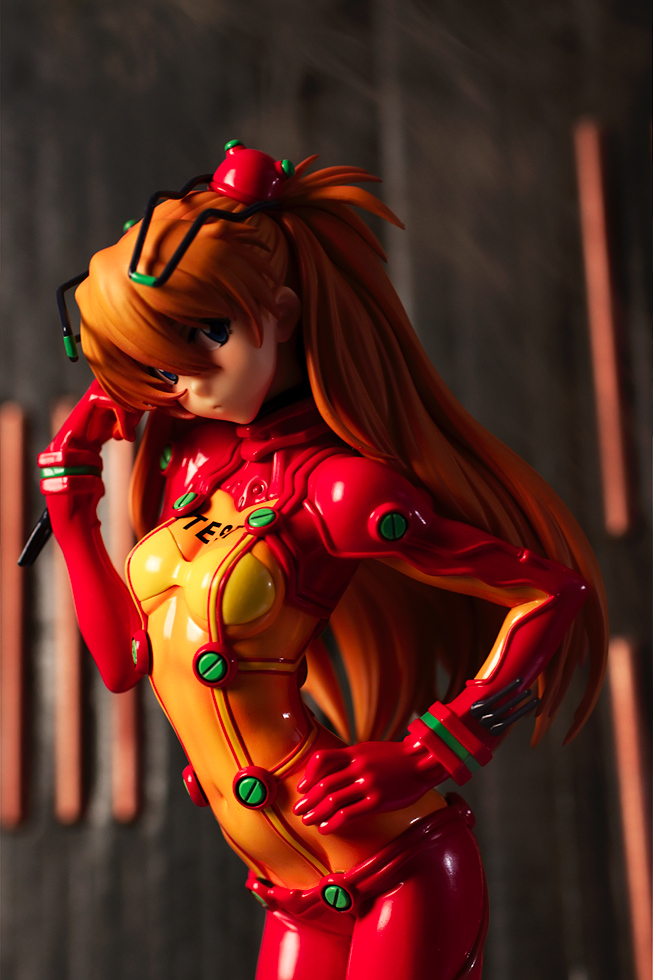 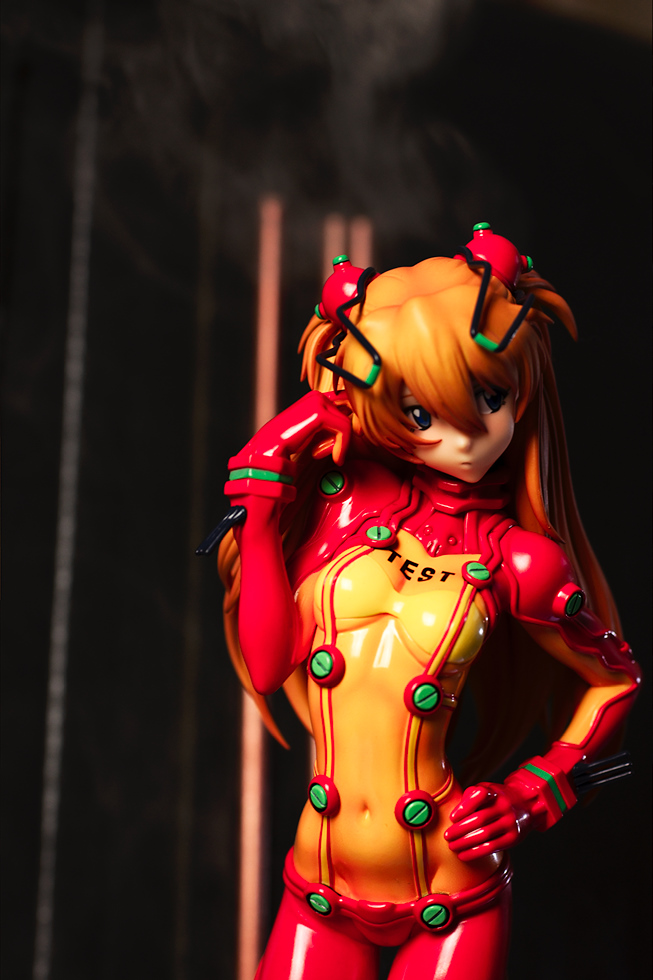 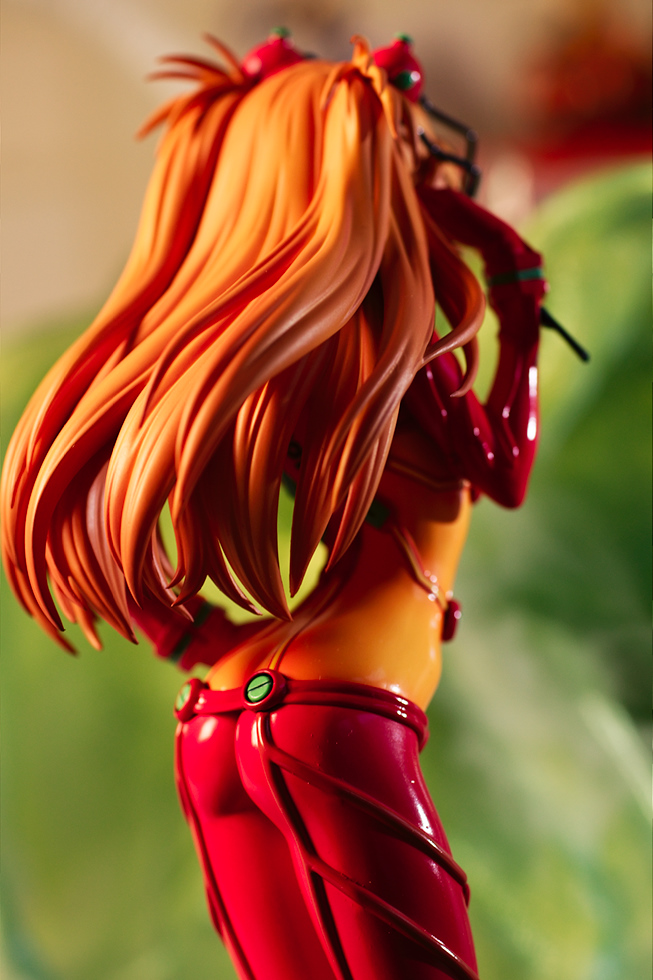 Even though Asuka’s tilted head shows a slightly embarrassed face expression, her pose radiates a feeling of a self conscious, strong minded personality. With her right hand Asuka brushes back a big strand of her hair, the left hand is just placed on the left side of her hip, very well done.
Like my Mugi figure, Asuka stands a little wobbly one her left foot, when slightly vibrations occur the figure is shaking from the right to the left, but it’s not like she would keel over anytime.

I really like this figure incarnation of the Asuka character, she looks just stunning and sexy.
Max Factory did an awesome job with this figure, her outfit and the deatails are very well made. Also the shiny finish on her Test Plug Suit looks fantastic and the 1/6 scale increases the beauty of this Asuka figure even more. Im already in love with this figure and I say Asuka is no mere figure she’s a statue of a godess *Q* ! If you liked what you saw of her in my review
you should try to get her if you are still able to find her somewhere !!! 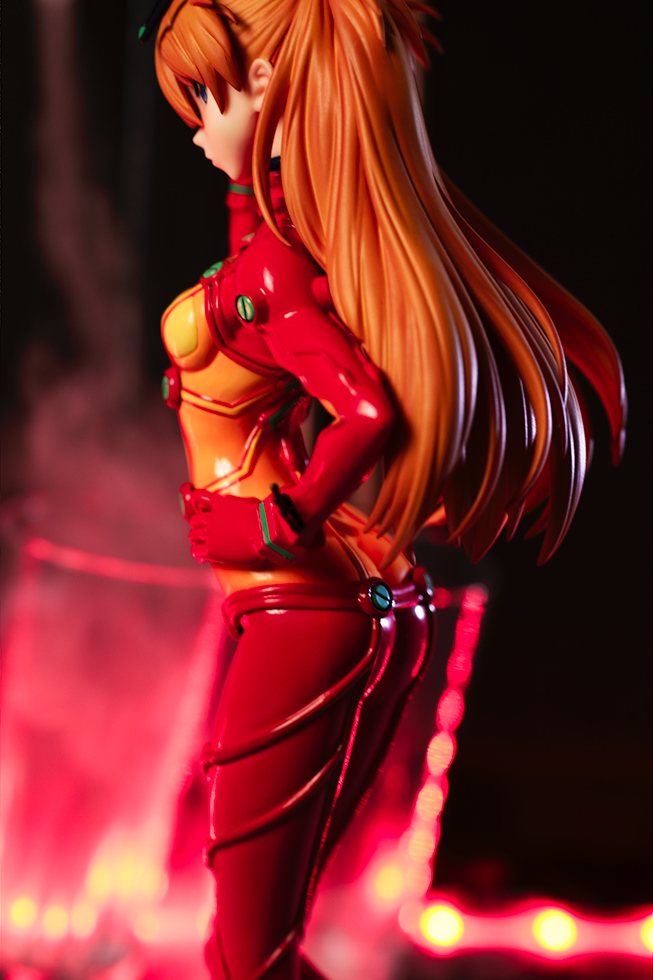 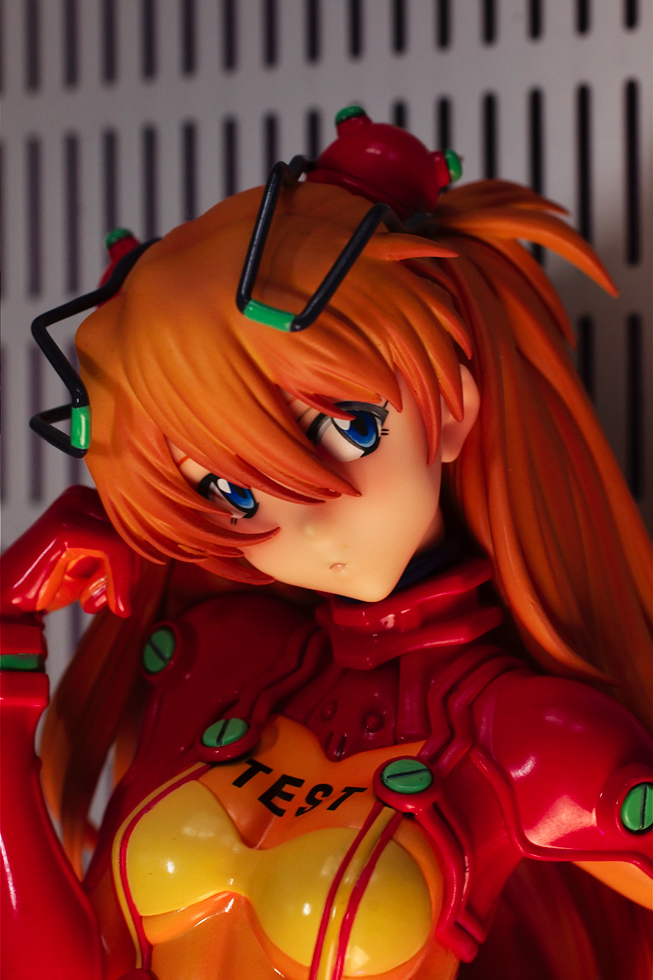