Hi there, todays post is about the anime shows of the winterseason 2012 lineup I recently started and enjoyed so far. Without further ado here are my short impressions about each show. 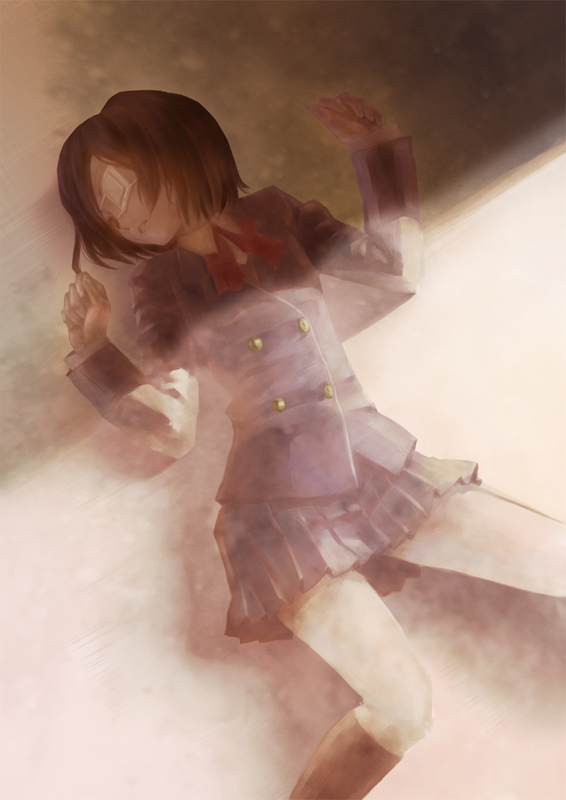 Another is a suplimal spooky horror anime, with a deep and slightly scary atmosphere.
Im glad that it is done in a sublime way without *in your face* horror and silly emo faces.

In the spring of 1998, the 14yr old Kouichi transfered from Tokio to the rural town, Yomiyama.
He had the luck to be put in the class of weirdos who seem to hide a creepy secret from him.

One day he meets Misaki, a mysterious girl with an eyepatch, she tells him that it won’t be good for him to get in contact with her. But Kouichi feels attracted by her and uses every chance to talk with her. Because of the suspicious behaviour of his classmates and Misaki, Kouichi tries to gather his own informations his aunt also provides him with informations. As if this was a good idea…
Soon some mysterious deaths occur in the town, even people close to Kouichi will be involved.

The animation quality of Another looks really good only the opening by Ali Project is scary. 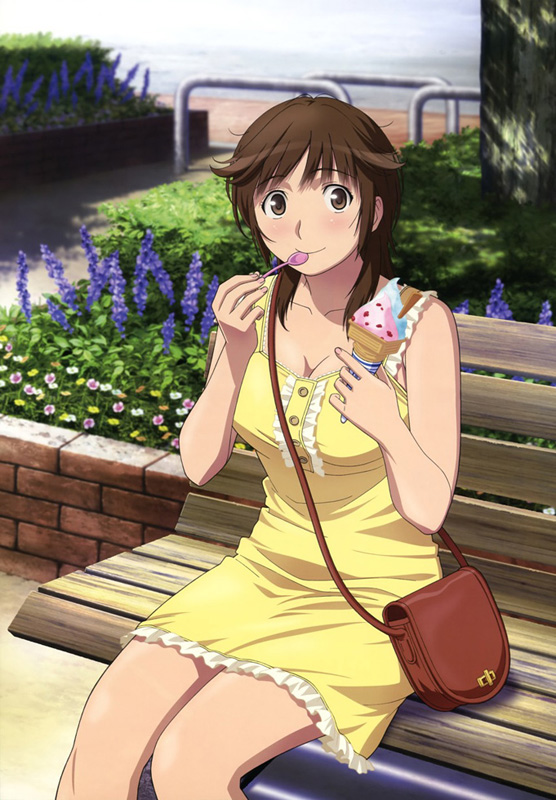 It’s the second season of the very popular Amagami SS franchise, it continues where the different arcs from last season left, each arc contains 2 episodes about Junichi and one of the 6 heroines.
Amagami SS plus delivers the same, friendly, cozy and especially romantic atmosphere as its predeseccor while taking the relationships between the couples to the next level. It’s so nice.

The red haired Ichika is an alien and accidently crashes into the life of our male protagonist Kaito and starts living at his house, the fact that Ichika is an alien wasn’t noticed by anyone so far.
She gets easily accepted by Kaito’s lively friends and all spend their summer holidays together.

What might turn out as a bit annoying in the progress of the story are the overlapping love intersts inside the group of friends, that can only go wrong. Shows like Persona 4 show that platonic relationships between both genders work yet it’s so rare in anime :(. There will probably be a romantic development between Kaito and Ichika even though both seem to be a bit dense in that regard. Aside from that the comedy is very good and the animation quality is quite appealing. 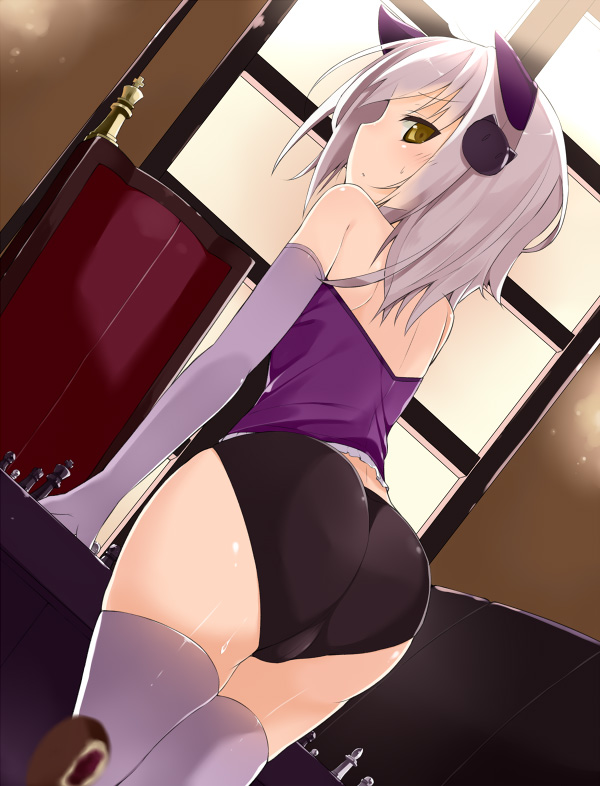 Highschool DxD is a straight action anime with lots of (uncensored) fanservice. This kind of anime became really rare over the last few years, UNFORTUNATELY! The main character Issei is an hot blooded, testosterone guided high school boy. He has no luck with girls, but one day a cute girl approaches him to ask him about going out with him. Issei is overjoyed, but on the day of his first date his girlfriend turned out as a sadistic fallen angel and Issei got killed by her. Fortunately Issei got resurrected by the demon Grimore Rias and became her demon servant. He also became a member of Rias demon team family. The story so far is solid and the characters are also likeable. 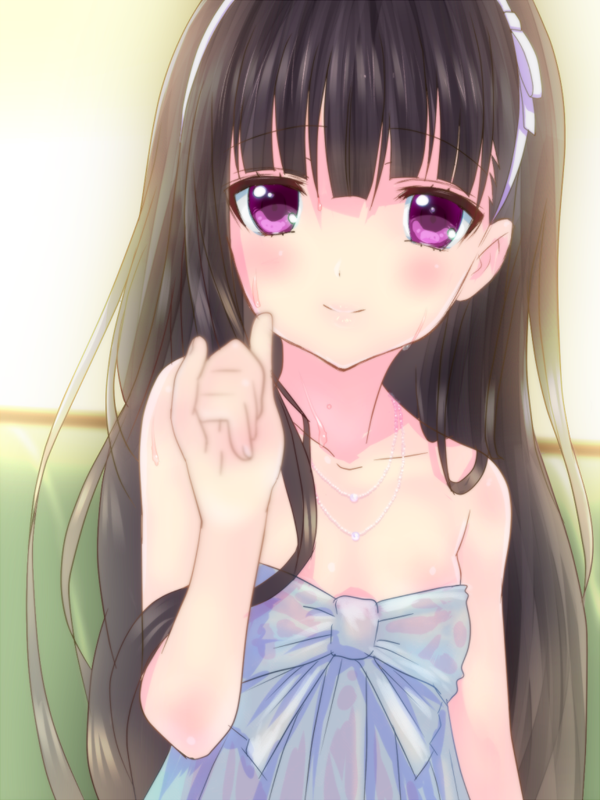 This is one of my favorites so far, main heroine Ririchiyo is a half breed between human and a supernatural creature, she never received earnest love from someone, not even her parents. Because of her difficult background, Ririchiyo developed a facade to protect her fragile self.
She speaks in an abusive way towards other people, so that they won’t get close to her.

Ririchiyo left her family and moved to Ayakashi Kan, a mansion for half breeds and Youkai.
As special service of this residence the inhabitens get a special agent who takes care of their needs. At first Ririchiyo is irritated by her agent Soushi, who shows dog like admiration torwards her, but because of his kindness and charming personality she keeps him as agent. The show follows their daily life, the ‘s backgound of the girl causes some drama but also good comedy is included, so far the balance of both is very well done. The animation style looks very well- 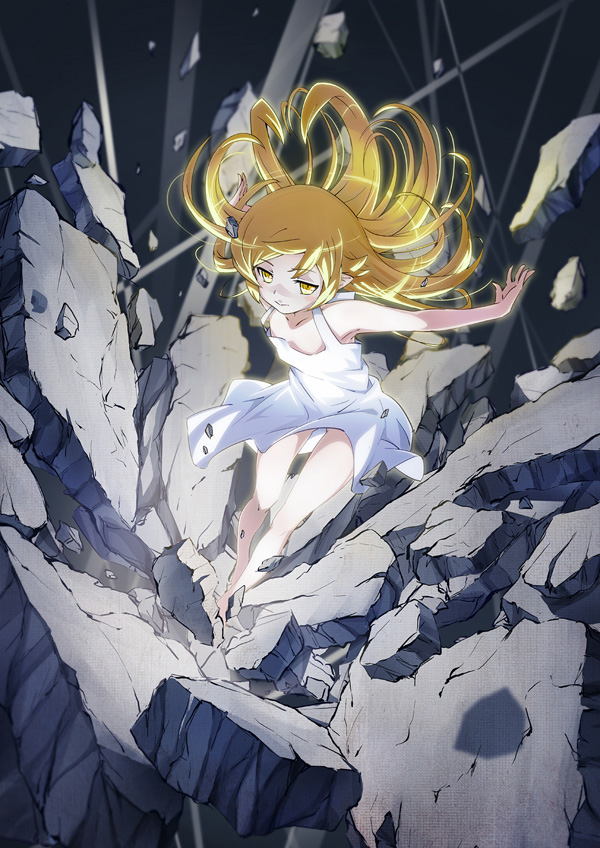 Araragi is back, after the great success of the Bakemonogatari anime in 2009, Shaft blesses us with a continuation of the stories. At first it isn’t clear which way the new story will take but the reunion with all the characters we loved in Bakemonogatari is really nice and entertaining.
There is quite an amount of high quality fanservice included, that lucky Araragi is such a player.

During the dynamic dialogs we learn a few things piece by piece that slowly develop the first arc, which is about Araragi’s sisters. Not that I would miss Senjougahara, but so far only had few screentime and in the time she had she did not appear like a girlfriend someone wants to keep. Haha the other girls were way more appealing so far, I would choose Kanbaru with her grown out hair she is quite pretty and she’s a wild one ^^. Nisemonogatari still has lively and fast dialogs, but the fast bombardment of text screens from Bakemonogatari seems to have stopped. 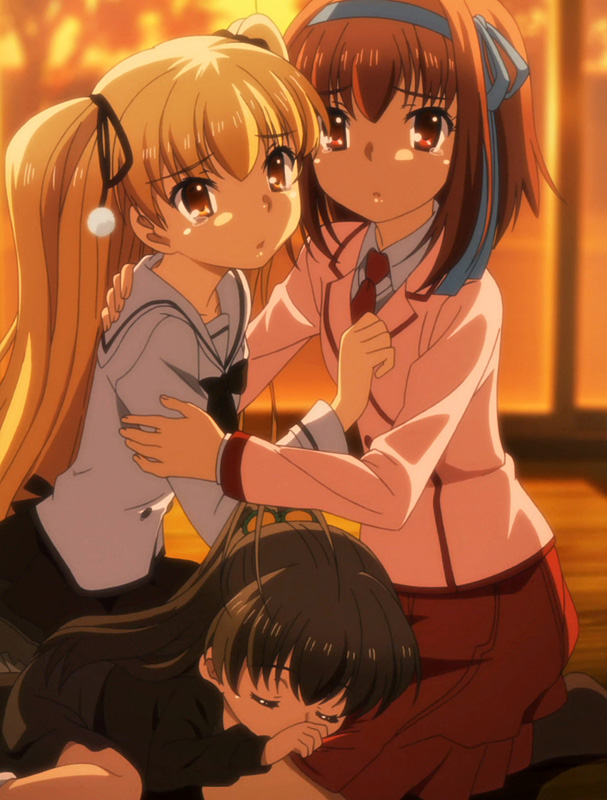 Yuta lives his newly started College life. One day Yuta’s visits his big sister, Yuri  and her daughters Sora, Miu and Hina. The main reason of the meeting is that Yuri wants to go on honeymoon with her busband and so her brother should take care of her daughters for a few weeks. On the first day Yuta and the girls have a lot of fun, but destiny strikes and the flight of the parents went missing. It is assumed that they are dead.

After the funeral the relatives want to seperate the girls, because none of them has enough space or don’t want to take care of all three girls, which is just cruel after they lost their parents a few days ago, Yuta doesn’t want this to happen and suggests to take care of all 3 girls, the relatives don’t really agree on that, but in the end Yuta and the girls move in his small appartement without real permission. They start to live in the small apartment, and the reign of chaos begins.

The end of pisode 02 was rather depressing, the mere thought of young children loosing their parents gave me the creeps. I wasn’t able to watch the next episode for some weeks. Nevertheless I picked this show up again. The anime is labeled as comedy but it won’t be overly light hearted I guess. It will be quite difficult to raise the girls with part time jobs and no support from anyone. it keeps me worried. Papa no Iukoto wo Kikinasai! has a interesting and heart warming story. Its nice how Yuta tries to take care of them and how the three sibliings interact. 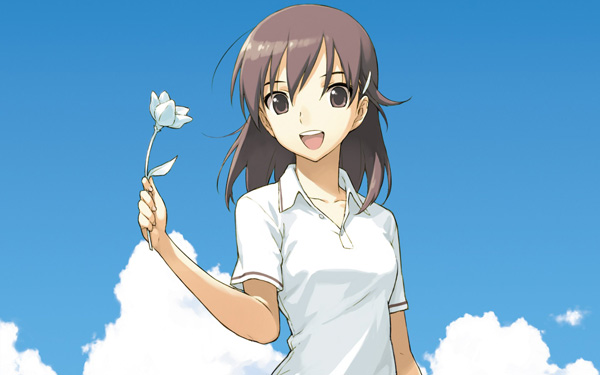 This appears as a happy toned mecha anime with enchantingly cute female pilots and very good visual effects. In the calm, placed next to beach, city of Kamogawa the bubbly Madoka likes to play hero and saves people in need whenever she can. One day an unknown girl named Lan takes her along to the hangar of a special agency, because of her abilities she is chosen to activate and pilot a certain robot. Without further ado they put her into cockpit to repress an incoming mech from outer space. It appears that Madoka will get support from Lan and another pilot, called Muginami in fighting against the bishounen aliens who are after the robot called Vox.

So far I really enjoyed this anime, it’s funny and nicely animated, also the characters are interesting and most of all likeable, there might occur a darker development in the future, a 2nd season is already announced. 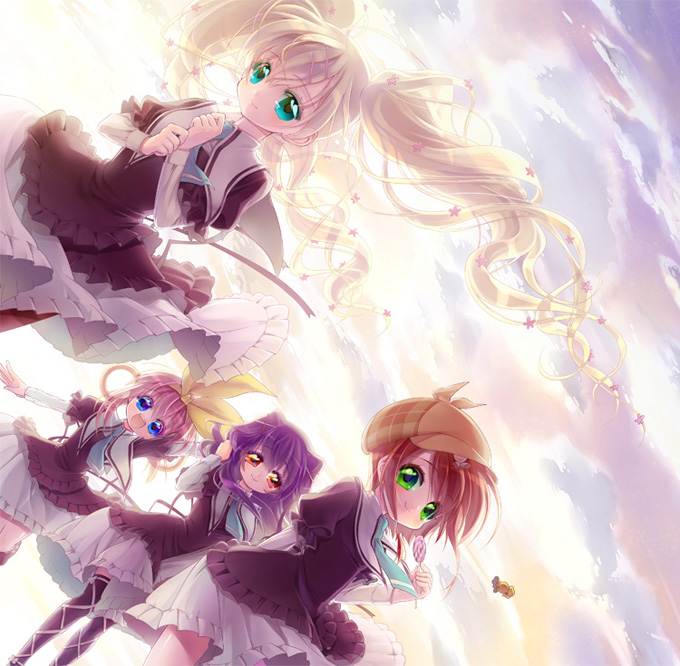 The cute yet stupid detectives are back, the season starts where the last one ended, Cordelia, Hercule, Nero and Sherlock still have no Toys and have no privileges in the academy, they have no own rooms, not good food, their treated really badly to sum it up. All the characters from last season are back, Arsene, her silly trio and the incompetent G4. Arsene desperately wants that Milky Holmes gets back to their old selves and triggers certain events. Tantei Opera Milky Holmes is a show from lunatic for lunatic. It has a special kind of humor which won’t be everyones taste. 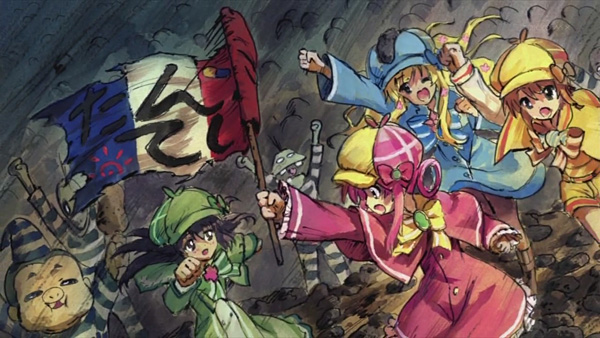 The animation style is not that appealing, but decent it has the appearance of an anime for kids, even though it is not suited for this audience. Anyway, what I can say for certain is, that the girls are cute. Hopefully the girls will get their tools back this time and keep them eventually. 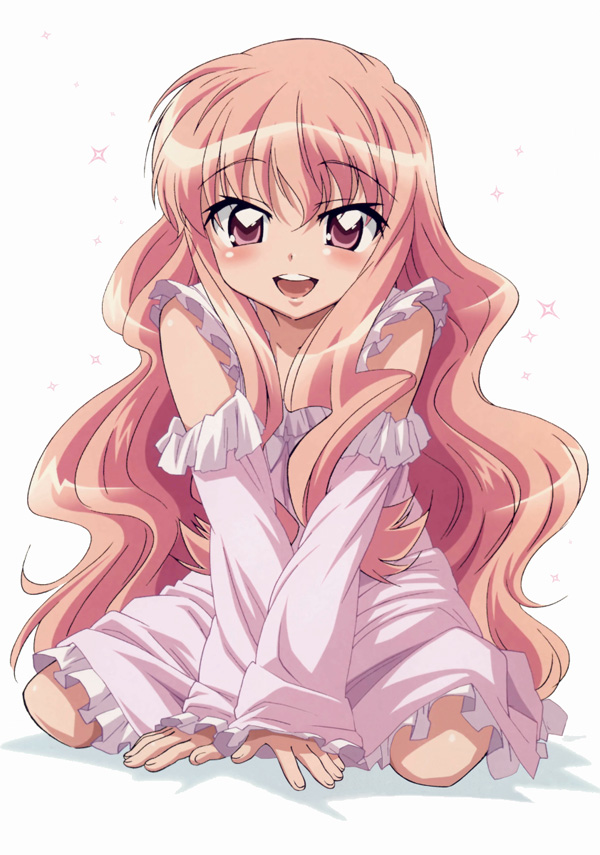 It took some time for the fourth season, but its nice to see all the old characters again and hear the nice background music. The 4th season also radiates the essence of the previous seasons and it still has the action, comedy and romance mix. In terms of Saito you’ll notice some development, putting all the bumping in harem girls aside (I think they should stop the harem thing near the end), he sets most of his attention torwards Louise. A letdown is, that Louise always gets interupted by the other girls when she wants to be alone with Saito.

Louise  still freaks out on the next possible ocassion and uses her “explosion” spell on Saito, which is somehow sad after three seasons of Zero no Tsukaima. I finally want my romance.

The setting and story of Zero no Tsukaima had always been good, but the end and also the impression of the whole franchise will depend on Louise and if she will finally fully accepts her feelings torwards Saito. I would be really dissapointed when they’d end this with an open end.

So thats all for now, the anime of this Winterseason 2012 turned out better than expected at first. Shows I would suggest to you giving a try are: Another, Nisemonogatari, Inu x Boku SS, Rinne no Lagrange and Papa no Iukoto wo Kikinasai!