A figure that was manufacturered by PLUM, it’s Astraea from the Sora no Otoshimono anime/manga. Her release date was in December 2011. On first sight, I got quite interested in this figure, but my opinion of Plums craftsmanship so far was just based on this Nymph figure and honestly it wasn’t that convincing to me.

So as their Astraea was announced I decided to wait a bit more with the purchase, I also expected that she might end up in the bargain bin like Plum’s Nymph before, but the opposite happened, at the shops I use more regularly the figure was already sold out that was fast. 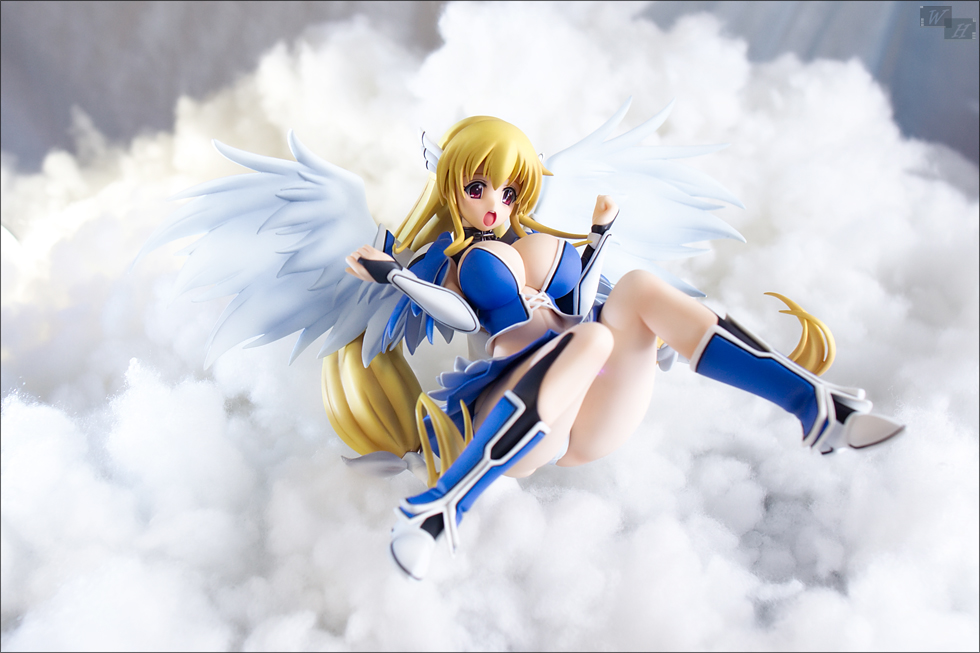 Astraea is scaled 1/6 and has impressive dimensions, she is 23 cm in height and 22 cm in length, from wing to wing she measures around 30 cm. You should have seen the huge box. 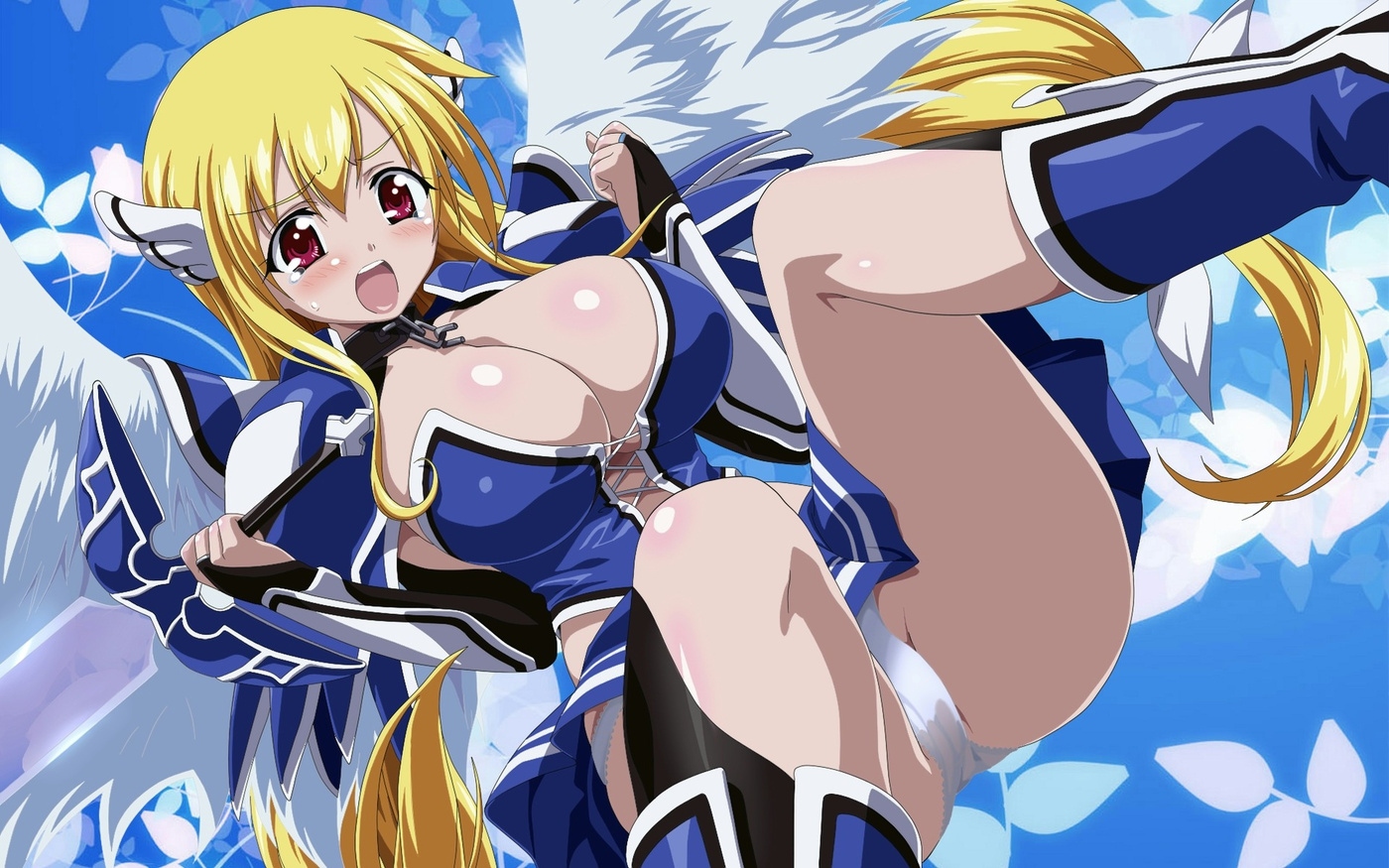 Astraea’s character at first appeared in the 2nd season of the Sora no Otoshimono anime and in chapter 22 of the manga. She is a close combat Angeloid Type Delta. She is a little airheaded and has limited intelligence, but she is equipped with high combat abilities and can show emotions unlike Ikaros. She is 159 cm in height and her bust measures 103 cm.

Later on on she became part Tomoki and his friends. I really like this cute big boobed girl with her cheeeful personailty. She is gluttonous and always scrounges off food from Tomoki.

It seems like a lot of people bought this figure but actually not a single one wrote a review (correct me if I’m wrong), which was another reason for me to track this figure down.

Fortunately I could find it the figure a few month after release at Plamoya, sometimes they have nice discounts, no Im not sponsored. During the shipment I started to doubt my decision, I didn’t know what to expect from Plum or this figure, would I be satisfied with her?
Anyway Im glad that I ordered Astraea, I would have regret it if I had passed on her. 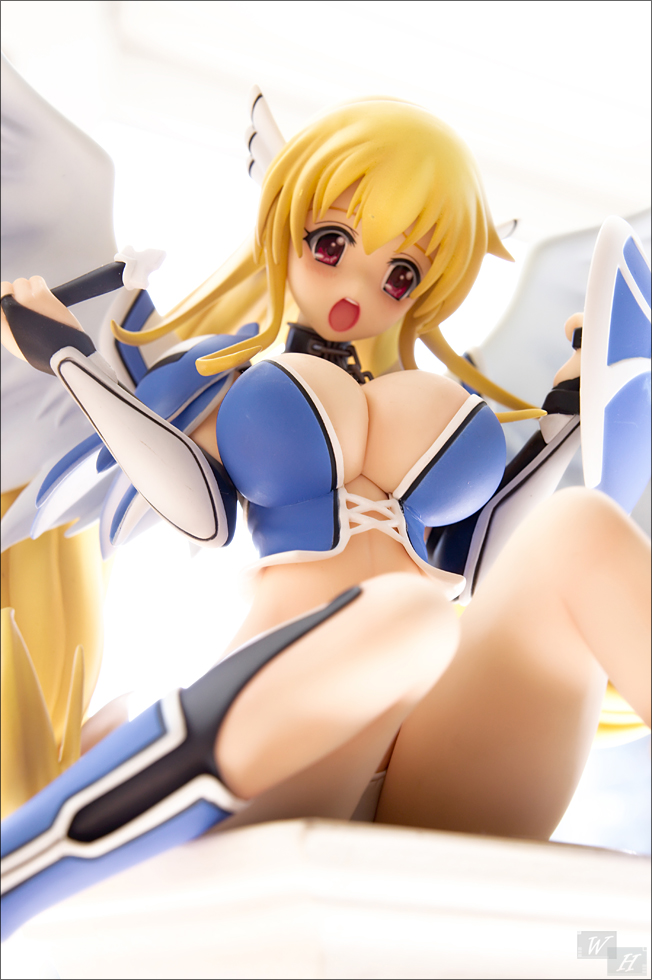 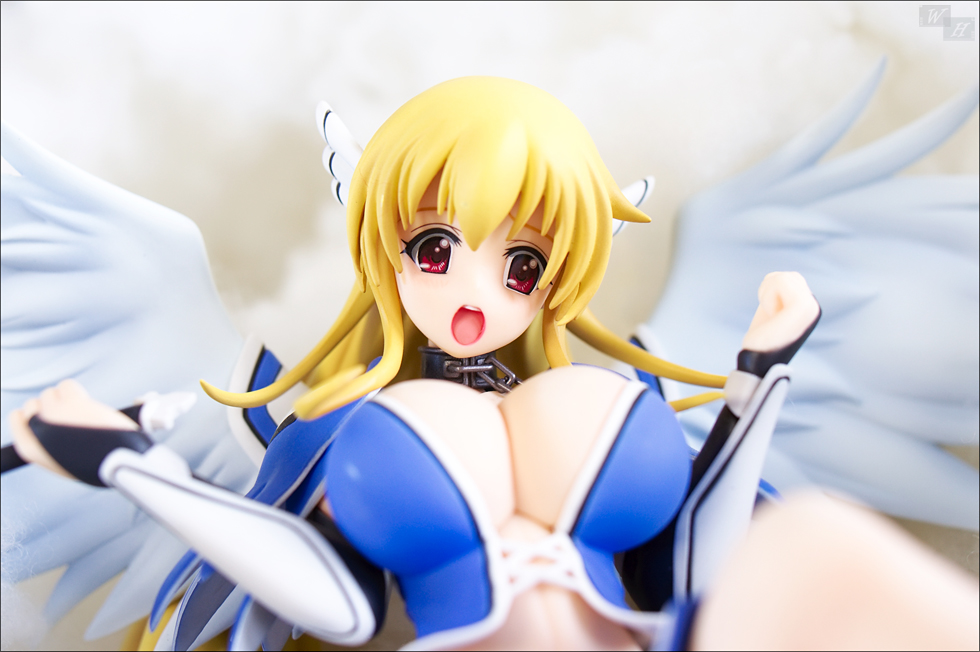 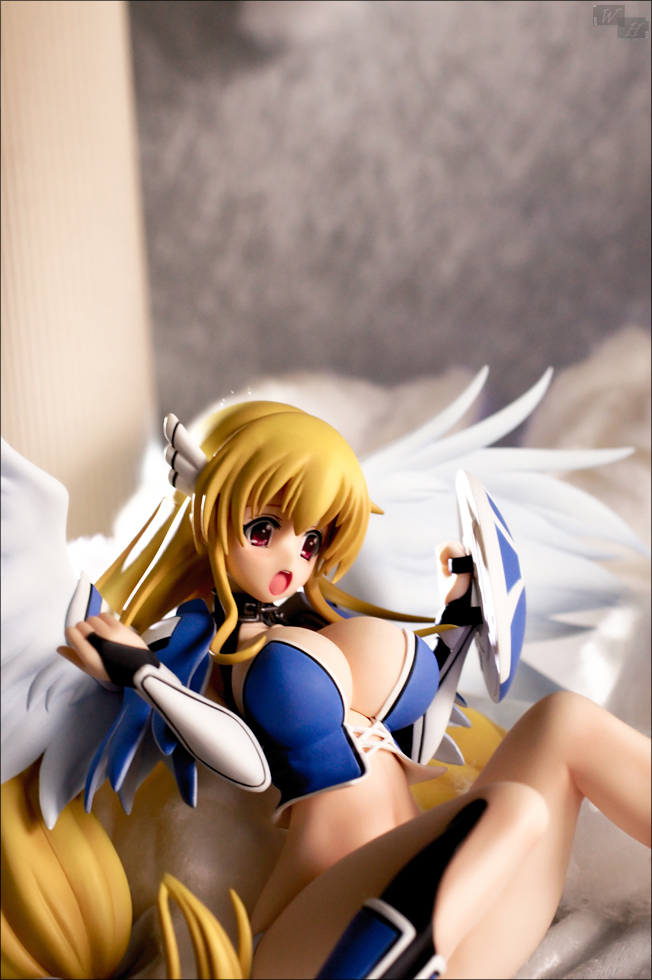 The base is made of ABS and is connected without a peg, you just have to hook it under the backside of her top and gravity does the rest. It is quite stable and the figure has no holes at the back. You can also display her without the base, she just needs a little support from behind.

Her straw blonde hair looks very well made, the strands as well as the shading are clean and nicely done. Further below the hair is splitted into two huge braids with detailed tips. The voluminous hair part isn’t made in one piece there are 4 smaller seam lines, but it’s no big deal. 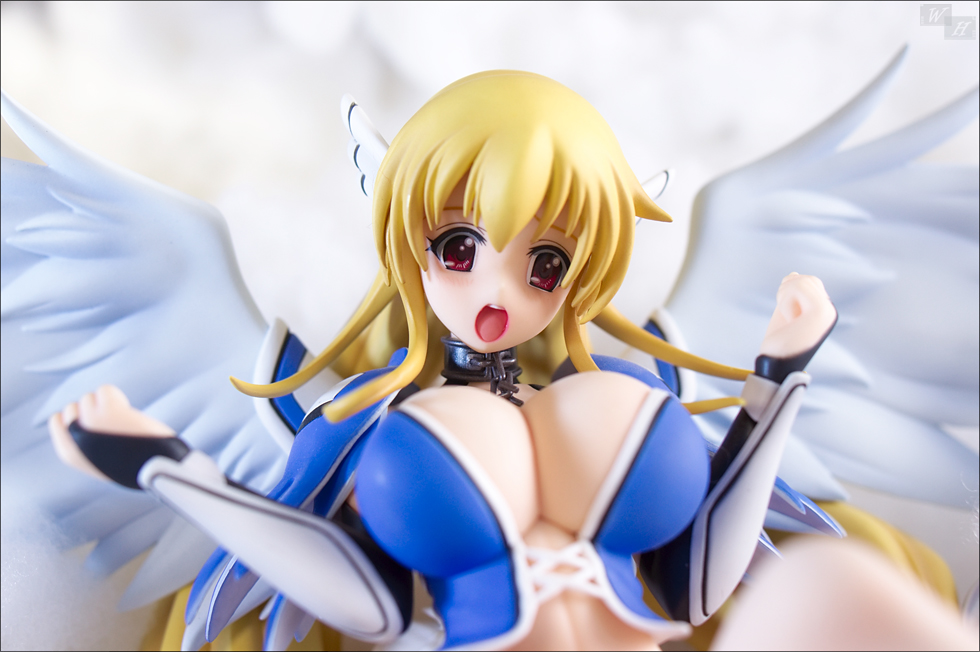 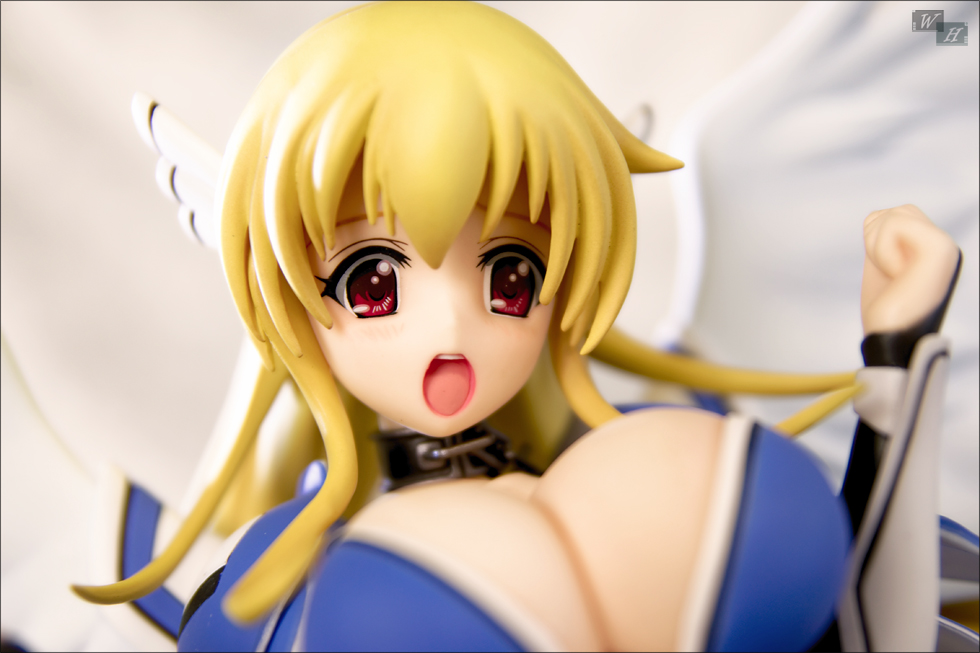 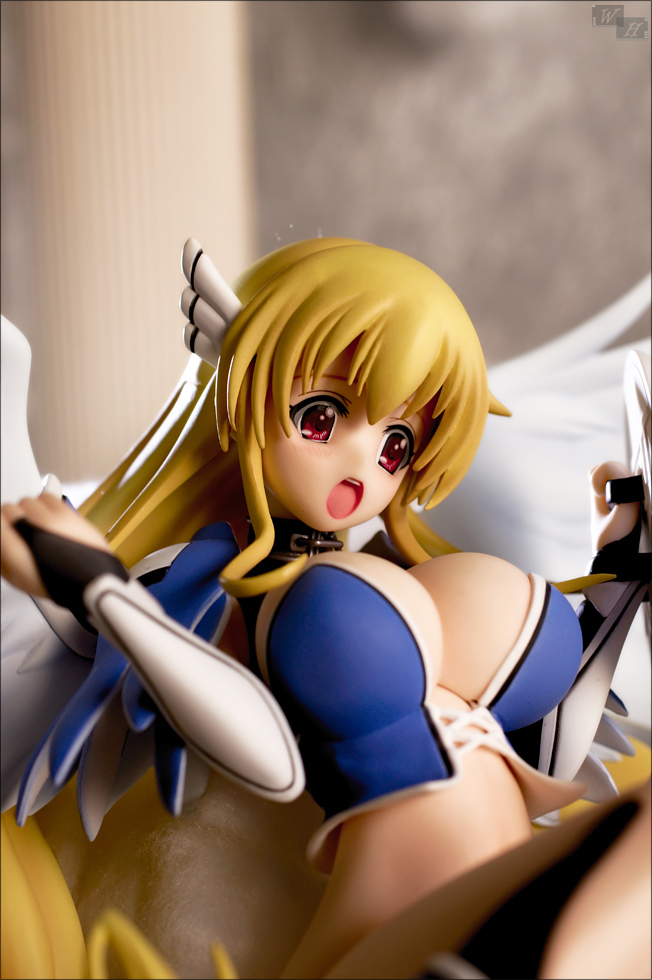 On the promo pics the figure seemed to have a rather aroused *kyaaah* face, but in person it turned into a somehow cute and surprised look from most angles, overall her face is very well recreated, the red eyes are lively and have a shiny finish, underneath are some nice blushmarks which were used in a more sublimal way. The figure has an deep open mouth with a nice upper front teeth line. Her naughty °v° mouth would have also been nice, but Im fine with °@° as well. 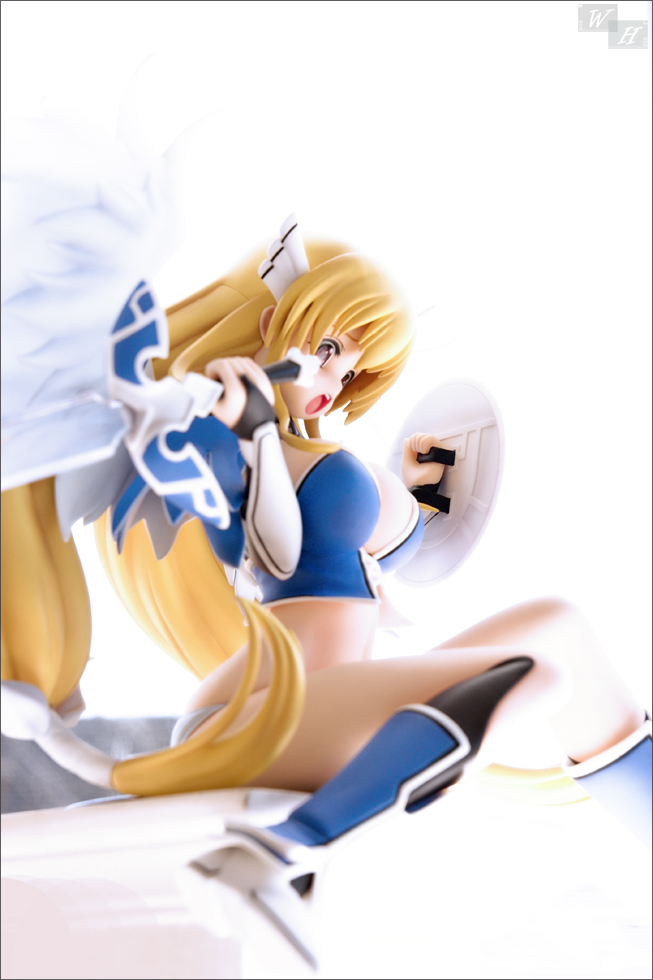 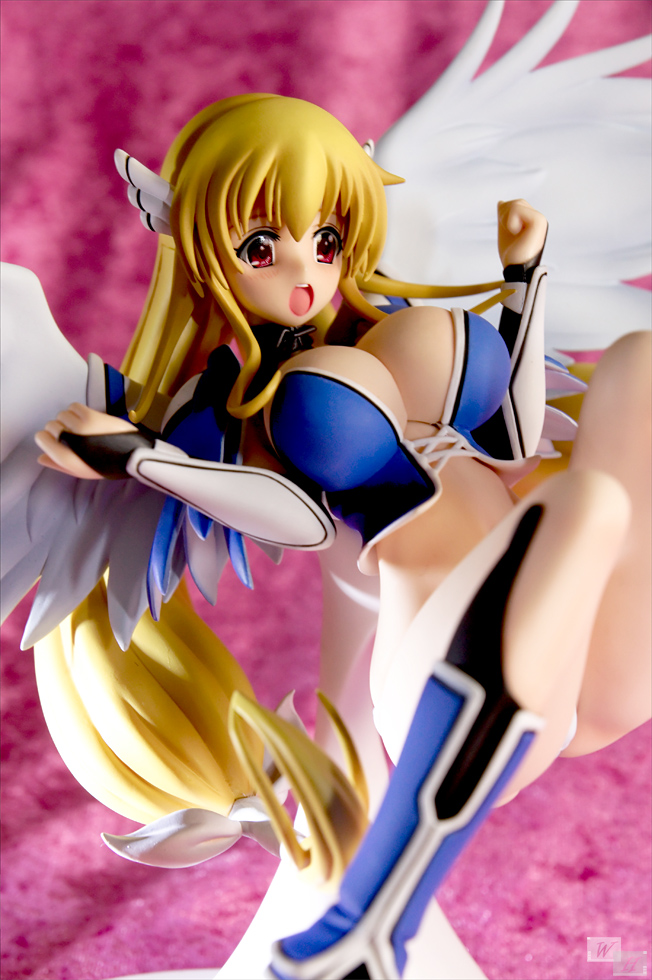 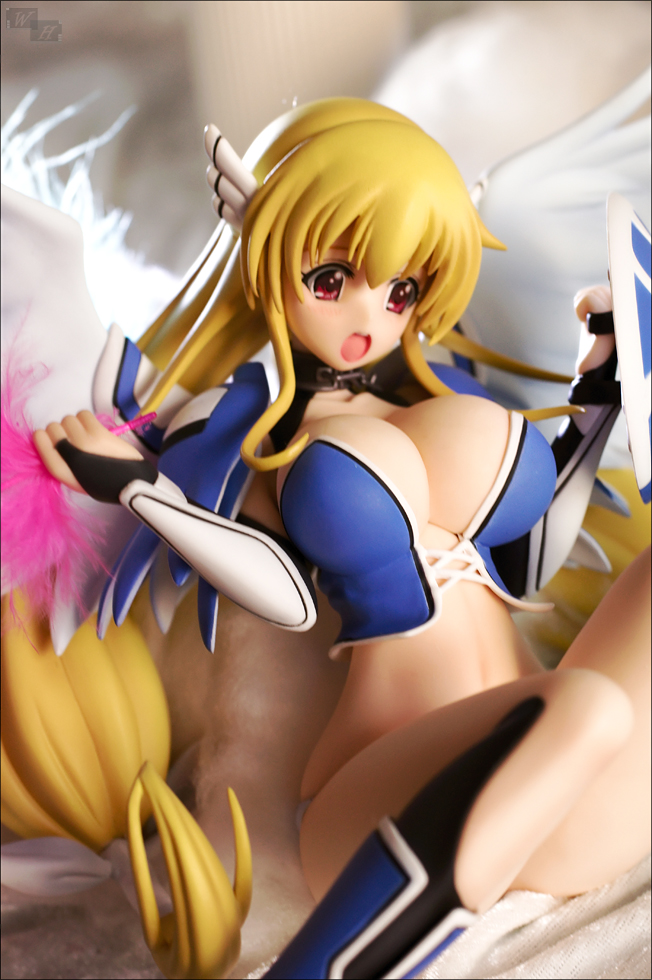 Astraea has a quite buxom body, she is probably the figure with the most impressive bosom in my collection, but she’s still within my so called “not bigger than her head, please” rule.
Im wondering if I can bend this rule enough to make the bath time Hinako figure fit into it XD

Astraea also offers a wasp waist, and a quite big butt for anime figure standards. Nevertheless calling her chubby would be incorrect since her abs appear very well trained. Other amenities of her are the  lovely meaty thighs, the long blonde hair and the beautifully sculpted wings with the diffuse and soft shading. Astraea herself has a delicious pale skintone with subliminal shading.

The figure also has  a nicely designed outfit as well, it is a mix of warrior and cheerleader clothes. The armor parts, the tight corsage and the playful skirt are a fitting combination overall. With her outfit, the buxom body and the sword shield combination, she looks like a Valkyrie. Astraea seems much more like a close combat warrior than her Angeloid friends Ikaros and Nymph. 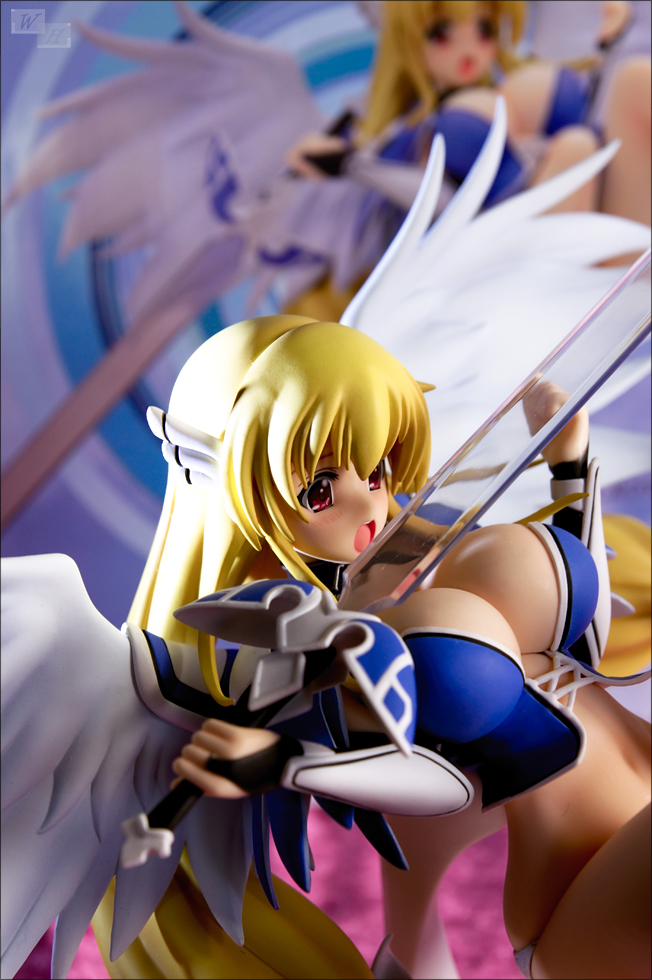 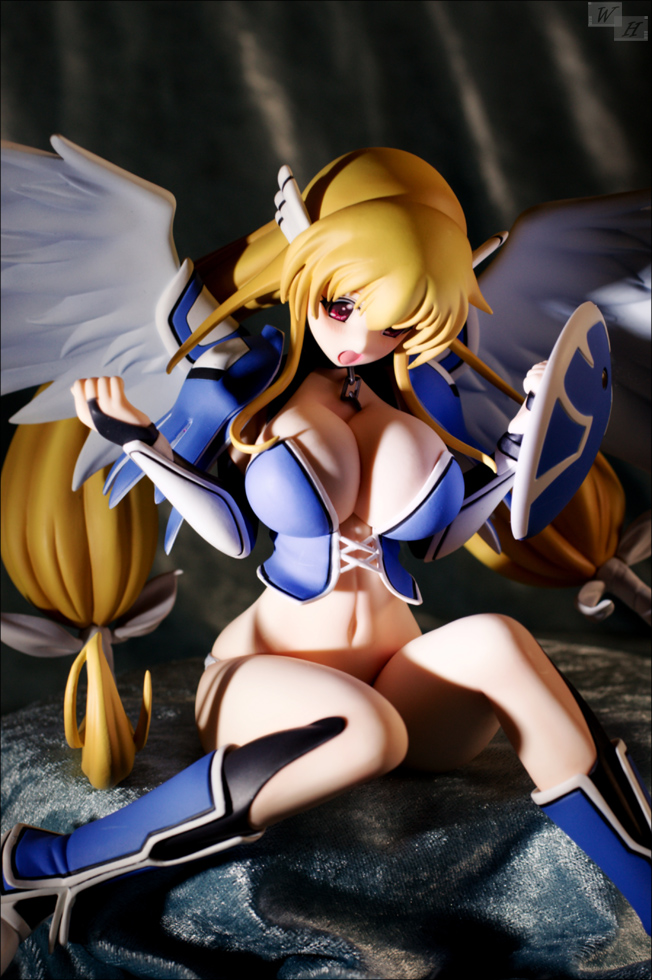 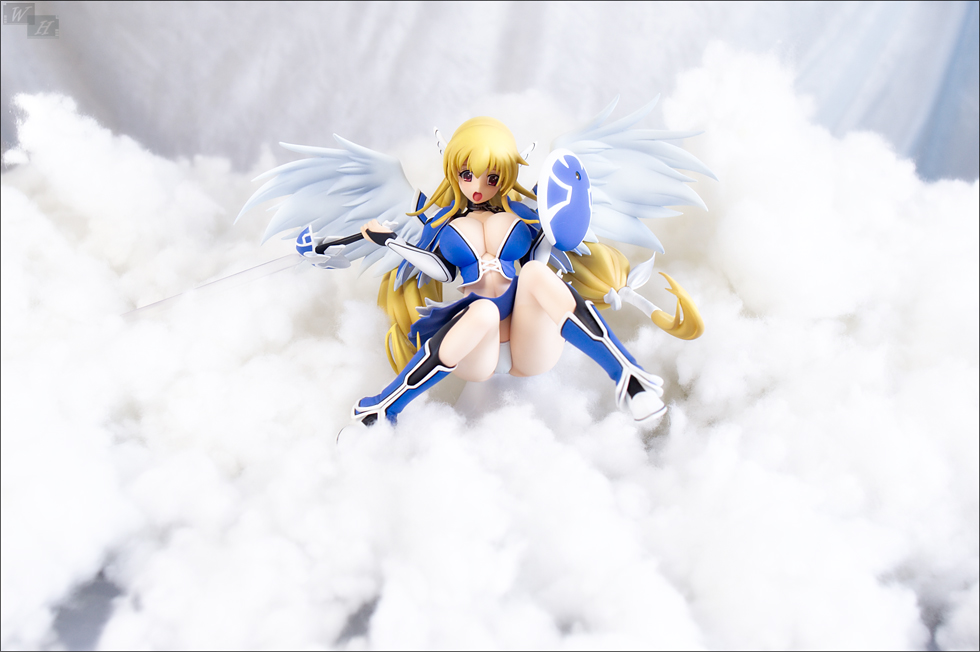 The clearly outlined and strong colors, work very well with the haircolor and the skintone.

Around her neck she is wearing a  detailed choker in shaded gunmetal color with a few single sculpted chain links. It looks definitely more detailed than the one of Kotobukiya’s Nymph.

PLUM’s Astraea has a castoff feature, but it’s just limited to her skirt, sadly no bare boobs XD. The body separates right under her boobs, you should pay attention to put the two parts of her body back together firmly or you will have a weird looking gap. It’s not like the skirt would cover much in the first place, but I enjoy the clear view at her broad hips and narrow waist.

Depending on the viewing angle at the figure, the crotch is sometimes more or sometimes less visible. Astraea wears innocent white panties but is showing some kind of a small camel toe. 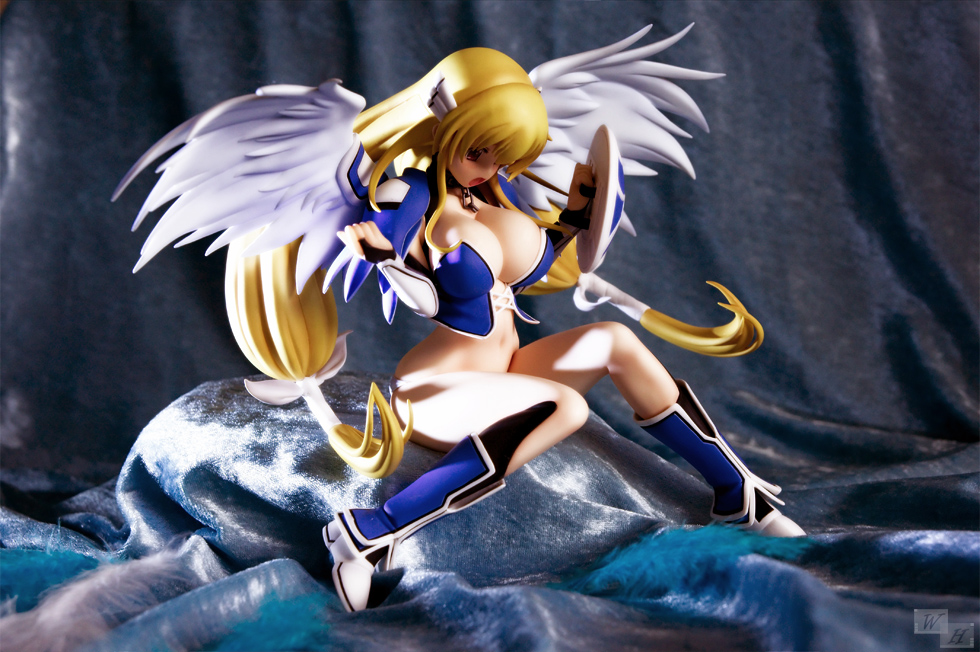 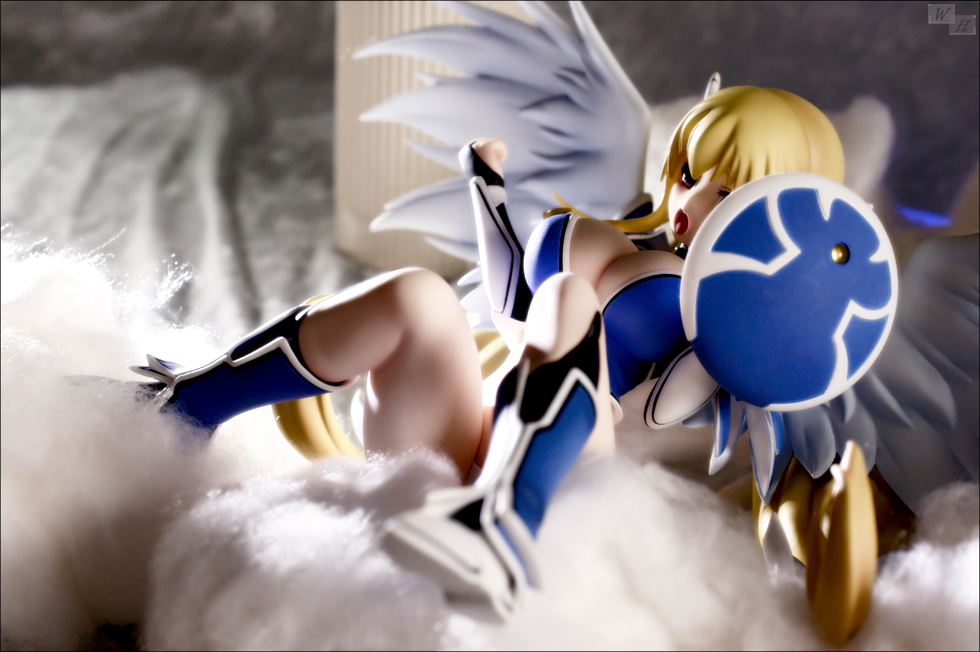 I guess I would have also bought this Astraea in a more simple standing pose, but PLUM went for a more elaborate pose which was based on the illustration below. It isn’t really clear what is happening, either someone is peeking under her skirt or Astraea did something clumsy. Anyway the sculpting is very well done an Astraea is presenting her nice attributes towards the viewer.

This figure is also equipped with a few weapons, the huge thing is a oscillating photon blade called ‘Chrysaor‘, and the shield is known as ‘Aegis L‘. You can display her with and without them, the sword can be placed in her hand and you can exchange the shield hand with a normal one. 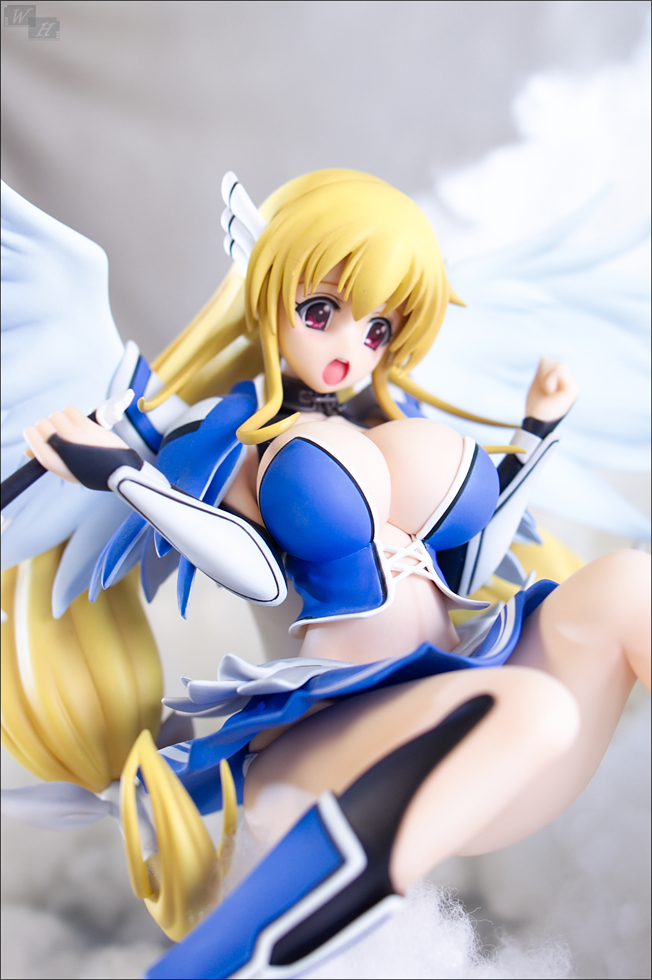 As some of you maybe already expected, Im really satisfied about how this figure turned out, with 1/6 she’s is a figure of the larger kind and leaves a good impression like that.

With PLUM as a rather new figure manufacturing Company you would probably like to know about their quality, in terms of Astraea I can say that she’s a great figure, they did a great job with the smooth sculpting, of the body and the outfit, it shows nearly no signs of seamlines.
The paintjob is applied in a quite clean manner with next to zero overapaintnig issues. Also her shading looks very good. There is really not much to complain about Astraea.
PLUM’s upcoming Erio and the recently announced God Eater Burst – Alisa from Wonfes also appear quite promising. 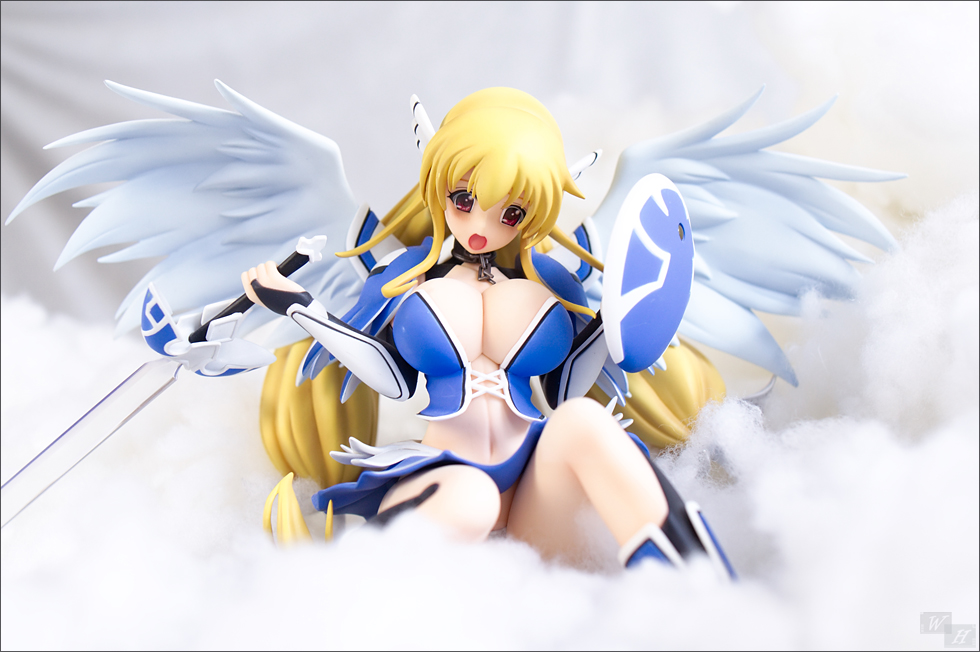 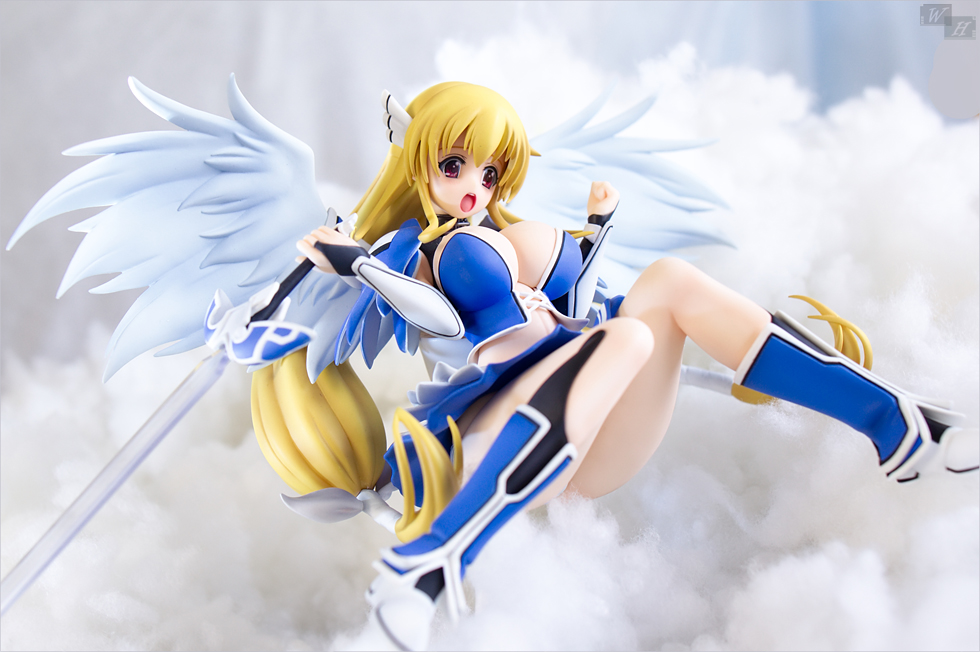 On a side note, it was somehow difficult to photograph a figure of such a size and pose, finding the right combination of aperture and distance for example. Im more used to smaller ones and most of my props were just too small.