Hi here is a new figure related post, but instead of a new figure review it’s about my latest figure preorders. 5 more figures made it to my list. This years list keeps growing faster than I would actually wish, lets see if I can keep it under 24 figures at the end of this year unlike in 2011.

First the last minute preorders/orders which were just added recently.

Naoe Kanetsugu from the Hyakka Ryouran anime is a 1/8 scaled figure which was released on 2012/02/24. With a big fat smile and a big fat hammer she has a very appealing design.

I nearly passed on Naoe since I wasn’t sure about purchasing her and as I considered it, she was already sold out on the japanese market. Luckily the german shop Figuya still had a few copies of her. I don’t have to say much more about her just check out Tier’s review, she’s awesome.

Another figure that triggered my interest since announcement was this Astraea, she is scaled 1/6 and was released on 2011/12/27. Astraea is the 2nd Sora no Otoshimono figure by Plum.

The face of the first one, looked a bit off, luckily Astraea resembled her origin close enough.
Sora no Otoshimono is a nice anime with likeable characters, the girls are especially likeable, unfortunately so far there is not much to find from them in the figure market. I like Astraea, the strong and gluttonous Angeloid with the low processing capabilities. The figure is based on an official illustration. Because of her face the whole figure appears a bit *kyahhh!* ecchi.

I would have prefered this figure with a happy face, but Im quite satisfied with the look of her body and outfit. I assumed that she would end in the bargain bin, but nonsense this figure was sold out faster than expected. A few days ago I was able to find her for a reasonable price at Playmoya. But with the figure in the shipping now I slightly start to regret this purchase, but lets see how this one will turn out in the end. My upcoming review of her might be interesting :p

Sayaka is from the popular Mahou Shoujo Madoka★Magica anime, she is scaled 1/8 and will be released in June 2012. From the bigger figure manufacturers GSC seems to have leased the Madoka license and at first I was a bit dissapointed as I saw their prototypes, because I expected something more dynamic. Madoka is very cute, but from the 1st run Madoka★Magica figures, Sayaka was the more appealing one to me. She is by far not my favorite girl from the anime. [spoiler name=”spoiler”]I still don’t understand why she chose to die in such a pityful way[/spoiler] but in terms of overall appearance she looks so nice. I really like her blue and white colored knight like outfit with the skirt and the cape. Some parts of her outfit give her a slightly tomboyish still ladylike appearance. The cute face expression is also quite appealing to me, as well as her pose. The hands are exchangeable and she is able to hold two cool looking cutlass sabers.

This figure was just recently announced on winter Wonfes 2012 and is now available exclusively at GSC’s online shop with shipping included I had to pay 12000 Yen upfront. This Hatsune Miku figure adaption is based on a submission by bun150 the winner of the Cheerful JAPAN! Cheerful Illustration Contest. The figure is scaled 1/8 and will be shipped in August this year. I fell for this figure as I saw pictures of her on Wonfes. She has such an adorable design, she is wearing a cute cheerleader dress and is equipped with an adorable face and super nice twintails. I also fell in love with the dynamic pose and the speaker box base, orange is my favorite color by the way.

A new swimsuit figure from AmiAmi zero’s Hyakka Ryouran swimsuit figure line up, next to Hattori and an announced Senhime figure, Jubei was chosen as a new figure. She is scaled 1/8 and will be released in September 2012. I actually like her design more than her character, but that shouldn’t be a problem, she has a very cute face and looks good from tip to toe. The blue eyes add a lovely contrast to the red hair and the skimpy red swimsuit. She has a very sexy body, with an well defined belly and a damn hot backside, this Jubei is also partly castoffable.

There were some more nice figures announced recently, that I would like to get, but since budget and space are limited, I have to give it some more thought to decide about ordering them or not.

Aside from the 5 new additions most orders stayed like on the last preorder roadmap, only the bathing Hinako was delayed again to April TT , but Nagisa is finally set to be released in August. 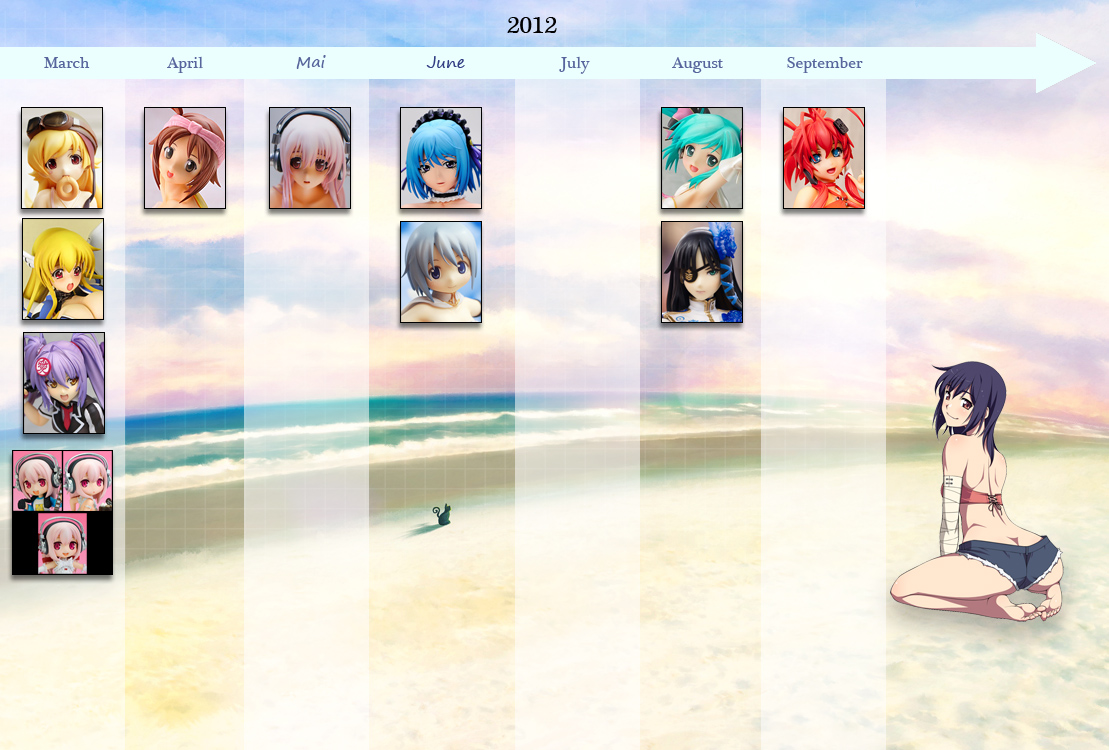