Today I can present you my review of ALTER‘s latest figure from the Hyakka Ryouran lineup. There already have been a few reviews of her, but it would be nice if you would also read mine.

Naoe Kanetsugu is scaled 1/8 and has a height of 225 mm including the height of her hammer. She was sculpted by Makio Munetoshi who mainly works for ALTER and Kotobukiya as well.

Naoe’s release date was on the 24th February, I’ve ordered her at a german store and therefore I had to wait a little longer. I wasn’t that convinced to order her at first, after a lot of debating for and against her purchase, I decided to get her, but at that time she was already sold out in the big and also small japanese shops. Luckily the german shop still had a few copy’s in stock.

Overall the Hyakka Ryouran figure Line up was and still is a big hit for ALTER. The popularity of the figures apparently isn’t based on the anime itself. It received rather mixed opinions from the audience and I think only a few people really liked it, like me who already watched it several times. Aside from the flaws in the storytelling the comedy was always overly entertaining for me. 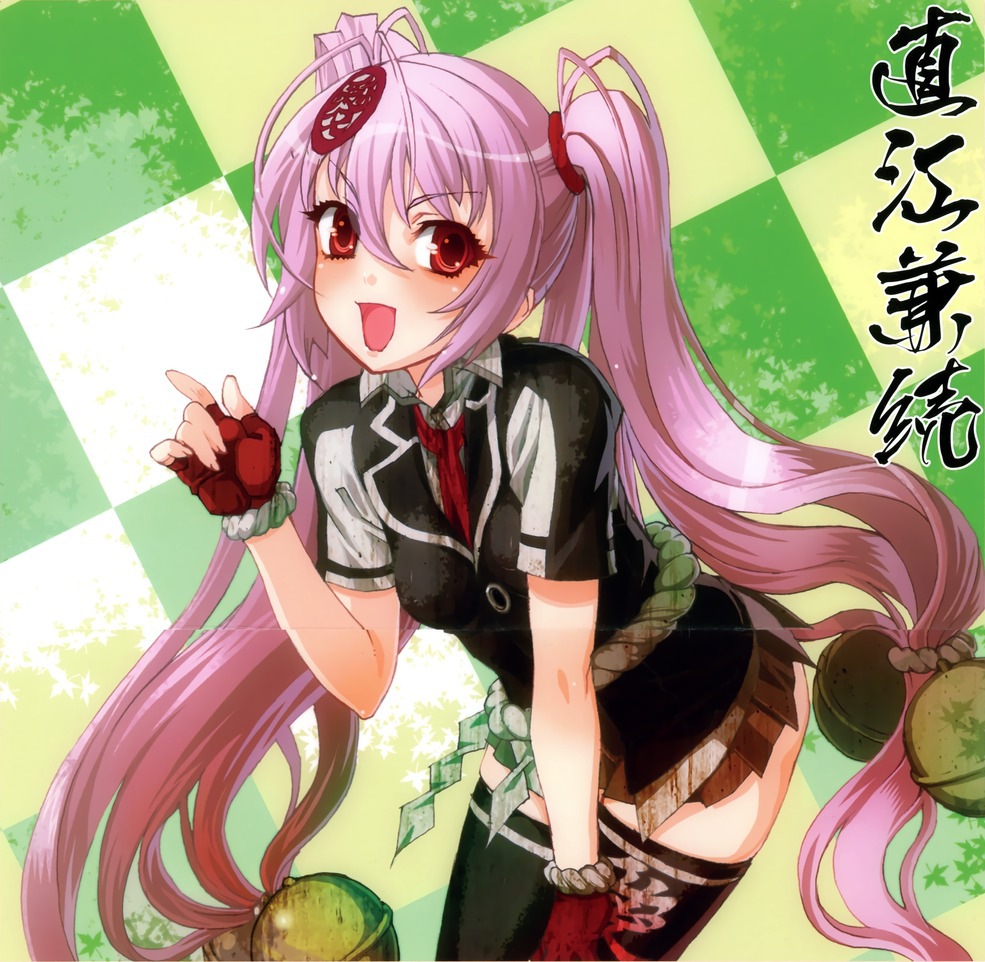 In the story Naoe Kanetsugu is a side character who joins the party halfway in the story. She has a goofy personality and often pretends to be good at certain things, but the outcome always showed us something different. On the other hand she’s a funny girl and caused some hilarious moments. Aside from being a cute weirdo in terms of fighting she’s not completely useless.

One appeal point of this figure Line up are the outfits, which are a mix of school uniform and traditional japanese clothes. In comparison with the other Samurai girls, Naoe’s outfit appears more like the uniform of a private school, aside from her weapon the knots and the sake bottle there aren’t that many traditional japanese traits. Anyway her outfit looks nice and stylish. 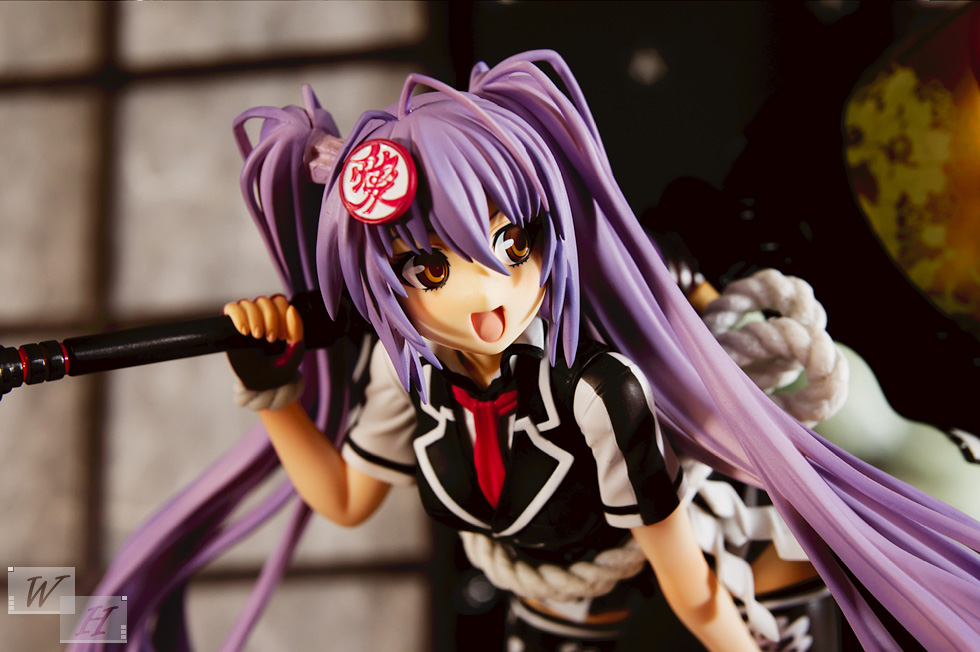 The black and white colored jacket is a nice piece of her outfit and together with the red tie a very modern look is created, her skirt is a simple grey and short one. What also draws attention are the stockings with the cherry blossom petals pattern and the white lines. The shading gives them a slightly transparent look and the dark color accentuates her bare thighs area very well. Smaller but not less eyecatching parts are the fighter like red gloves and the fancy design of her shoes. 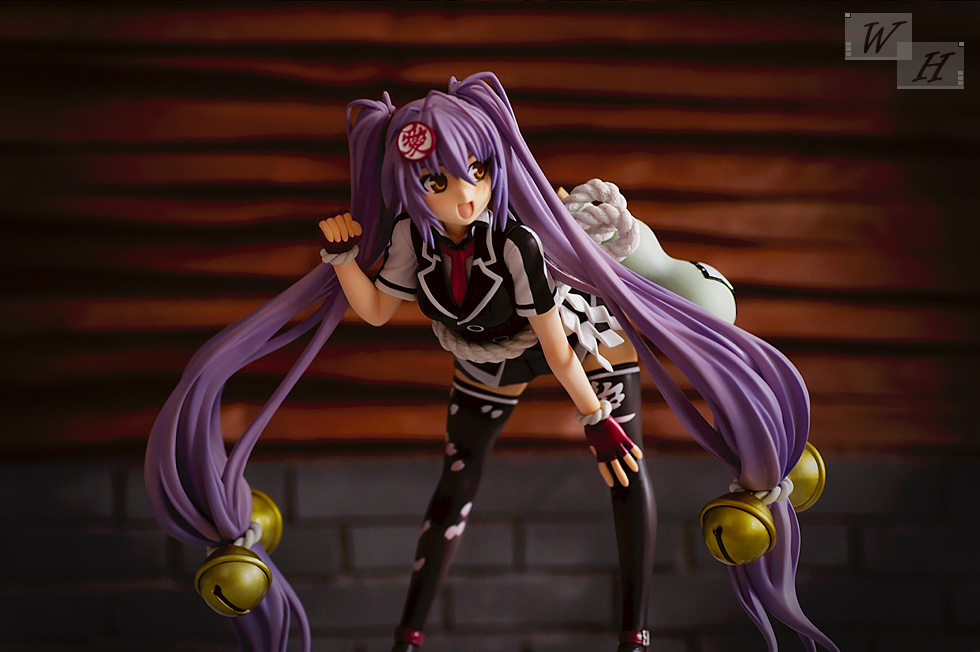 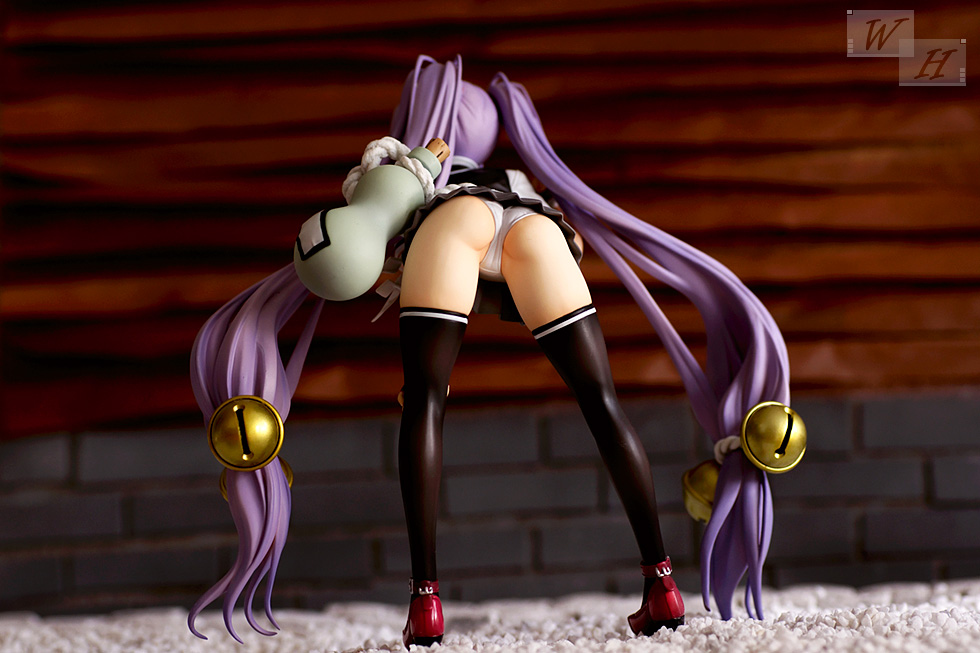 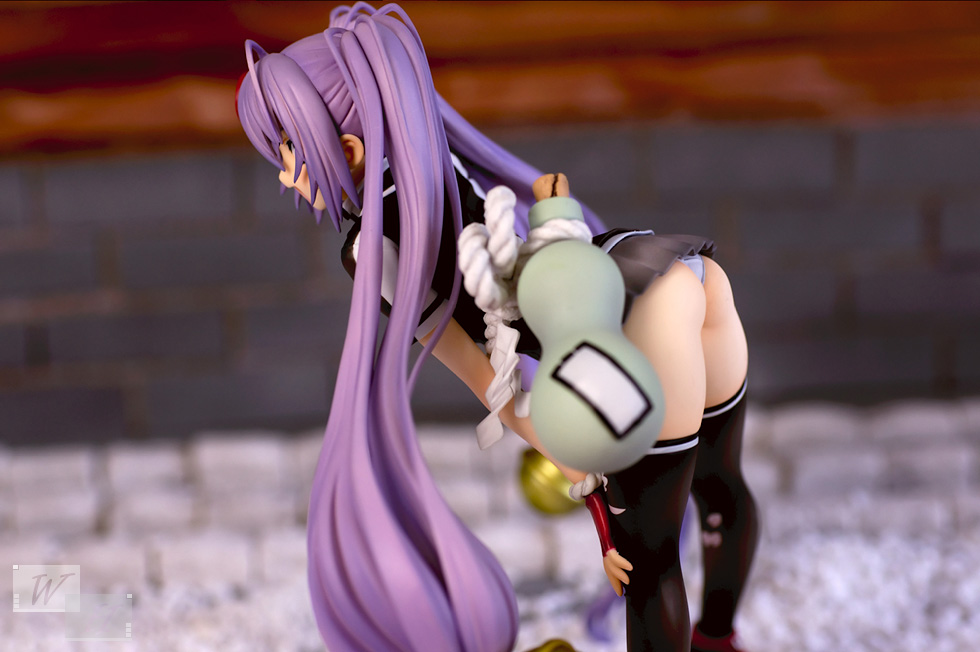 I don’t know if Naoe is a hard drinker, but this sake bottle is a interesting detail and I really like the level of detail they added to the cork, it looks almost real. 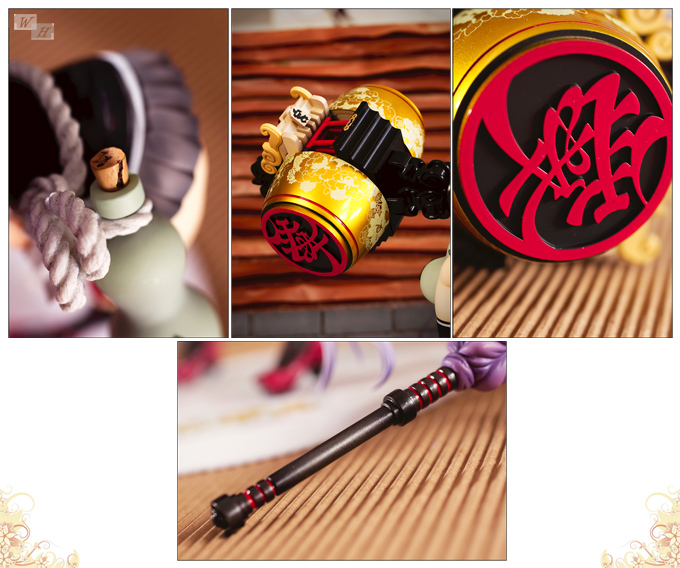 From my impression ALTER’s figures became cuter than in the years before, be it Kaminagi Ryoko, Charlotte Dunois or the child version of Takamachi Vivio, all of them have a cute and adorable flair. Also Naoe received this cuter finishing with her big eyes which are pointed to the left, the joyful open mouth and the rosy cheeks, she’s just an enchanting pretty young girl. 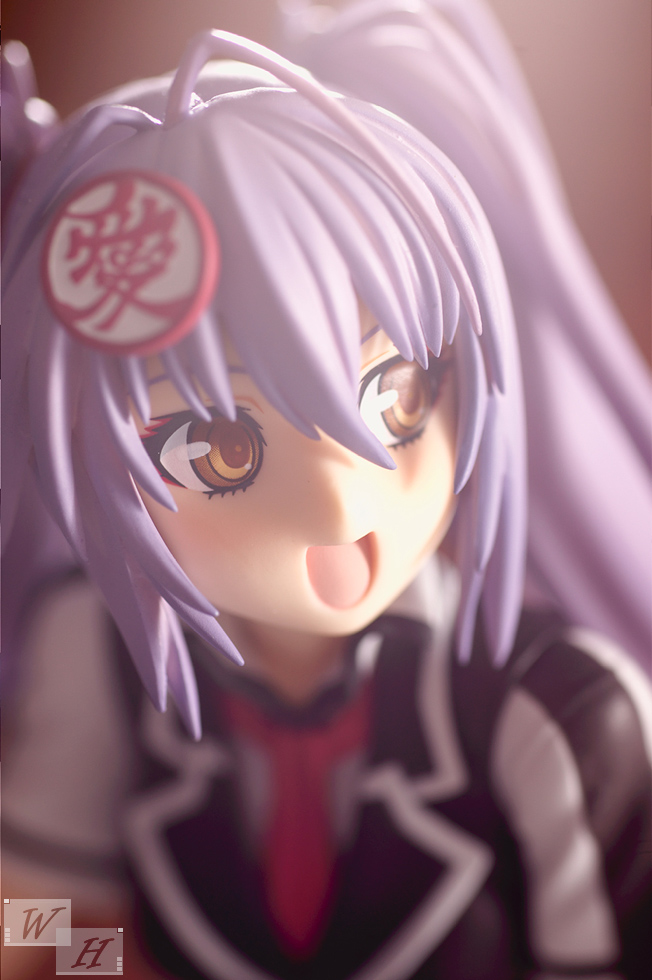 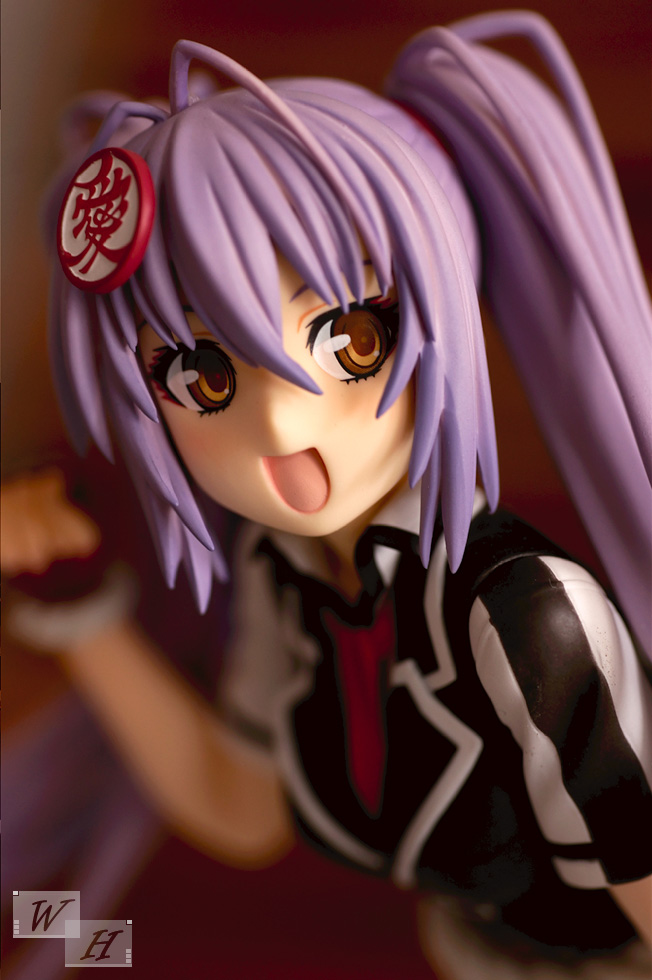 A lot of effort has been put into Naoe’s hairstyle as well, the hair has a very nice look and feel to it, all the sculpted strands are giving her hair a very three dimensional and detailed appearance.
At the end of each of the twintails are some big metallic colored bells connected via a white rope.

The bendover pose appears quite cheerful like she wants to play her next prank on someone, despite her modest appearance from the front, her rear is quite exposed and with her tight fit white panties there is not much space for imagination left. The figure is showing her nice buttocks, her thighs and overall very pretty legs garnished by some pretty black stockings. 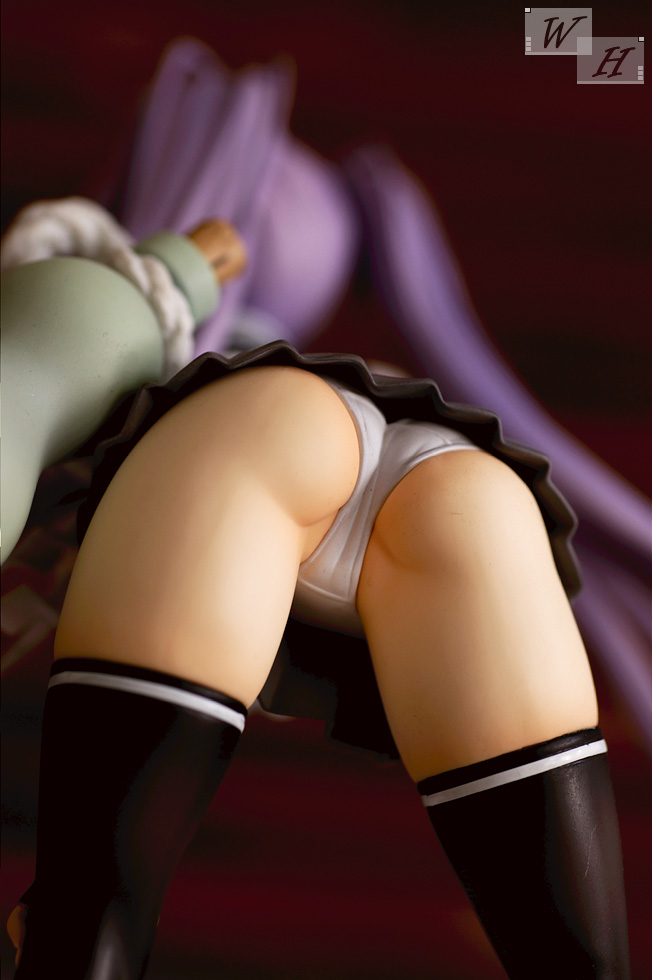 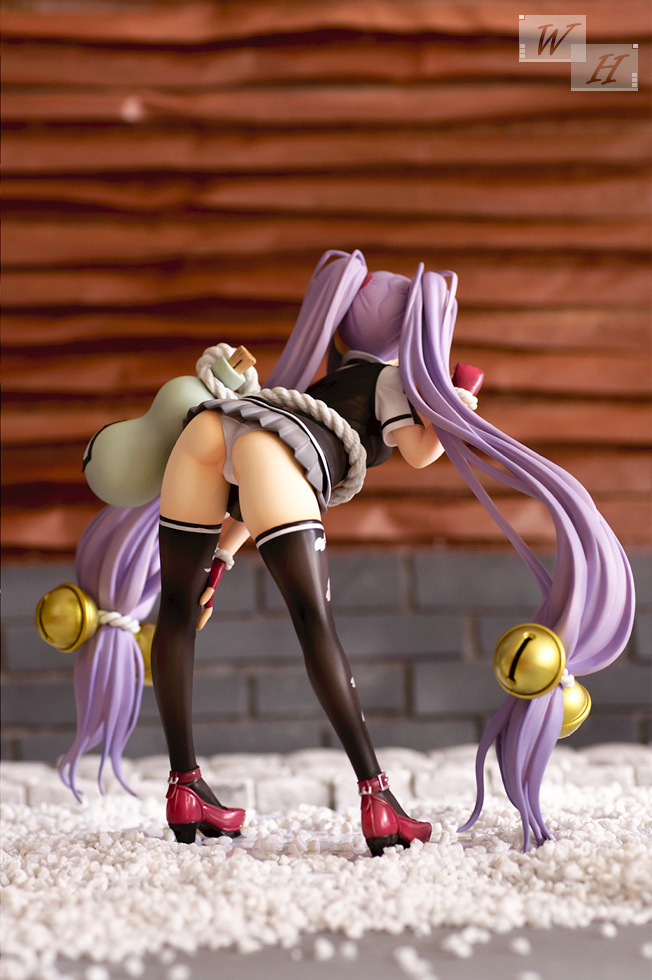 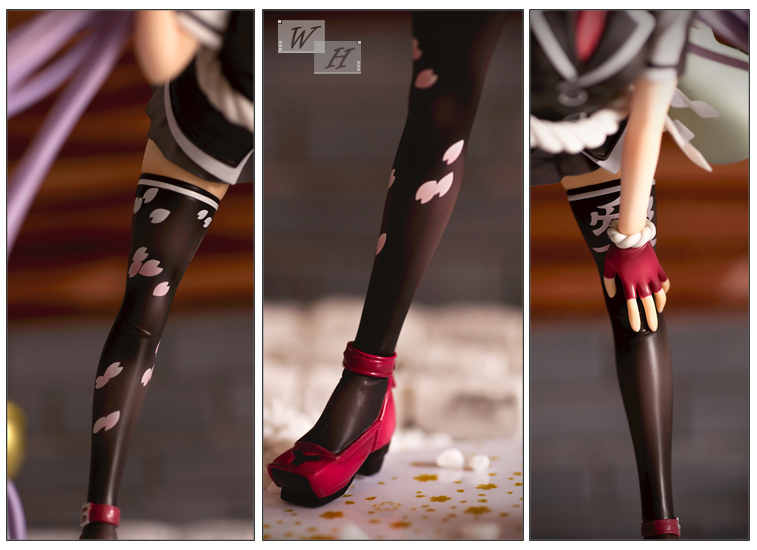 There are also come some optional parts with the figure, there are two different arts for the end of the staff. One is a simple end part while the other one has a fixed chain made of flexible PVC attached to it. To attach the hammer you have to take off the end part and push it in her hand, to make the assembly a bit easier one of the twintails can be taken off. 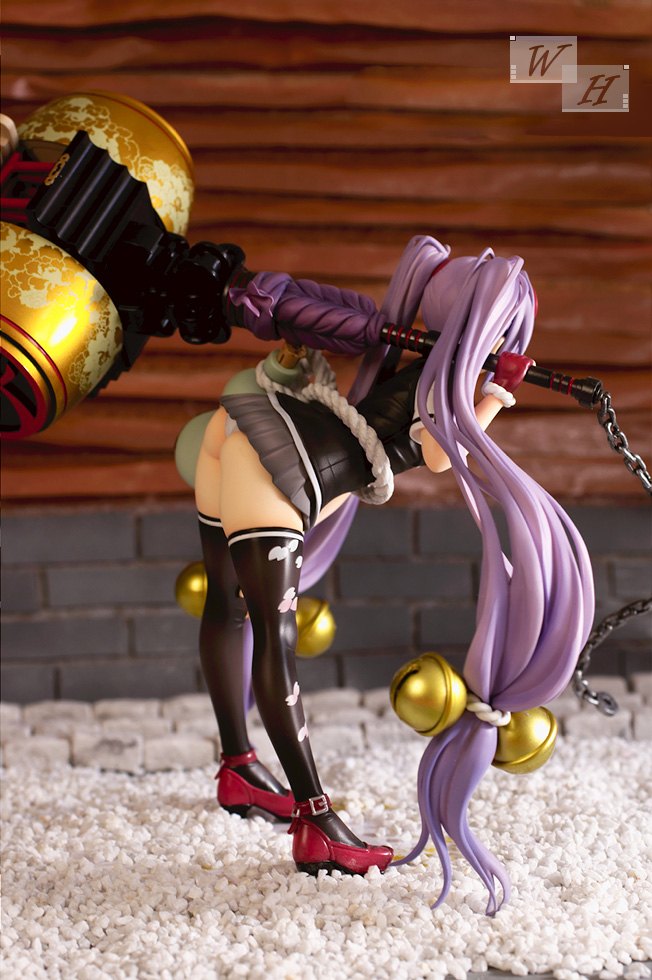 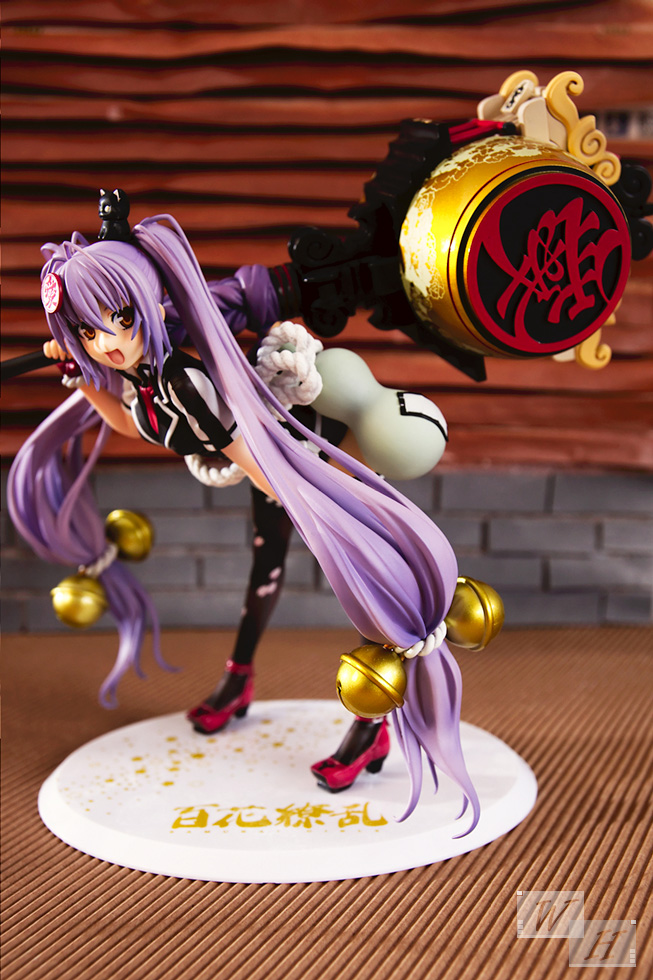 Me and the Hammer…

My impression of the Hammer is not entirely positive, overall it has a fancy design, the hilt is very well crafted and has a nice texture, also the golden parts of it with the flower ornaments look pretty. Unfortunately the things in between, which resemble a temple look a bit cheap with the glossy plastic texture and show only very little shading. I somehow felt reminded of Playmobil. 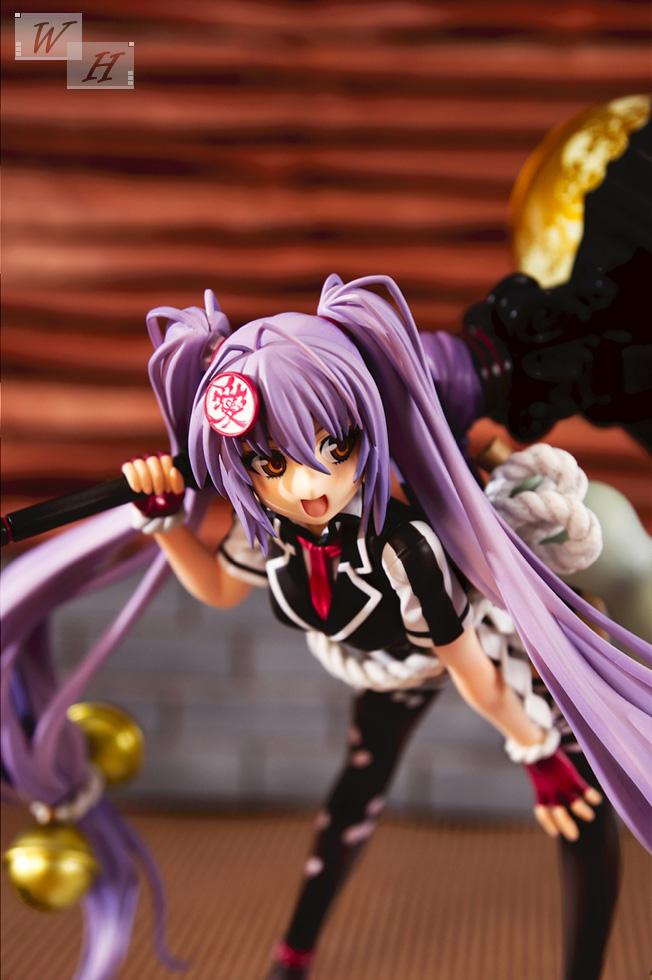 A bigger point for criticism is the balance of the weapon, it is a bit annoying to put it in place, cause it won’t stay in place even with the clear stand ALTER included. It is such a hassle to use it. I can’t shake off the impression that it was done in a somewhat half assed way. On their blog ALTER provided a detailed explanation how to use it, but in my case it only worked for an hour.

A hole for the shaft in the base would have probably solved the balancing problem. I came up with my own solution, you have to turn the shaft of the hammer so that the purple ribbon of it sits on Naoe’s back, so far it’s still in place and puts less stress on Naoe’s arm. 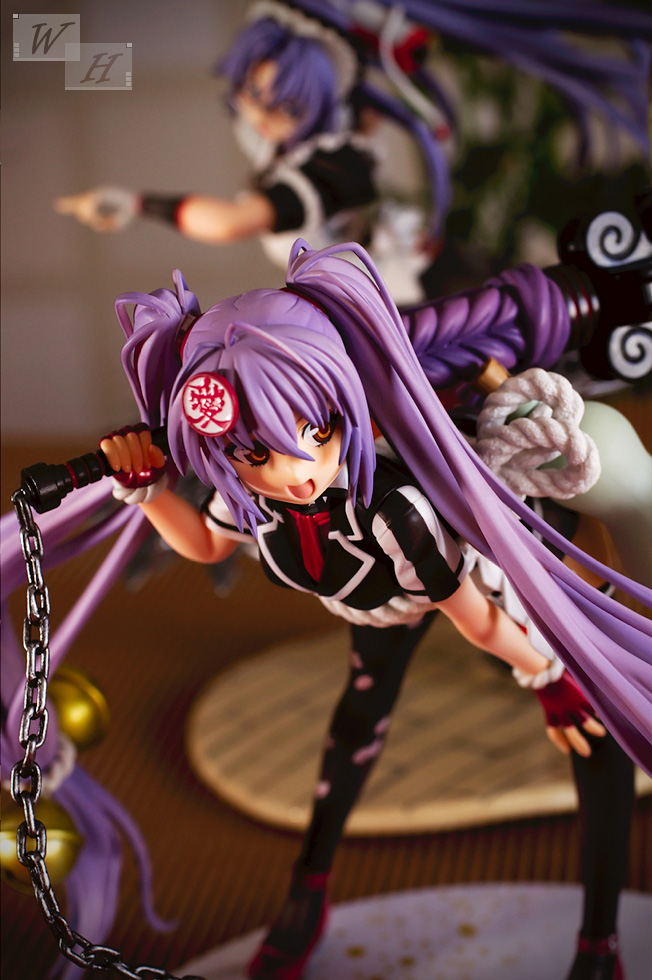 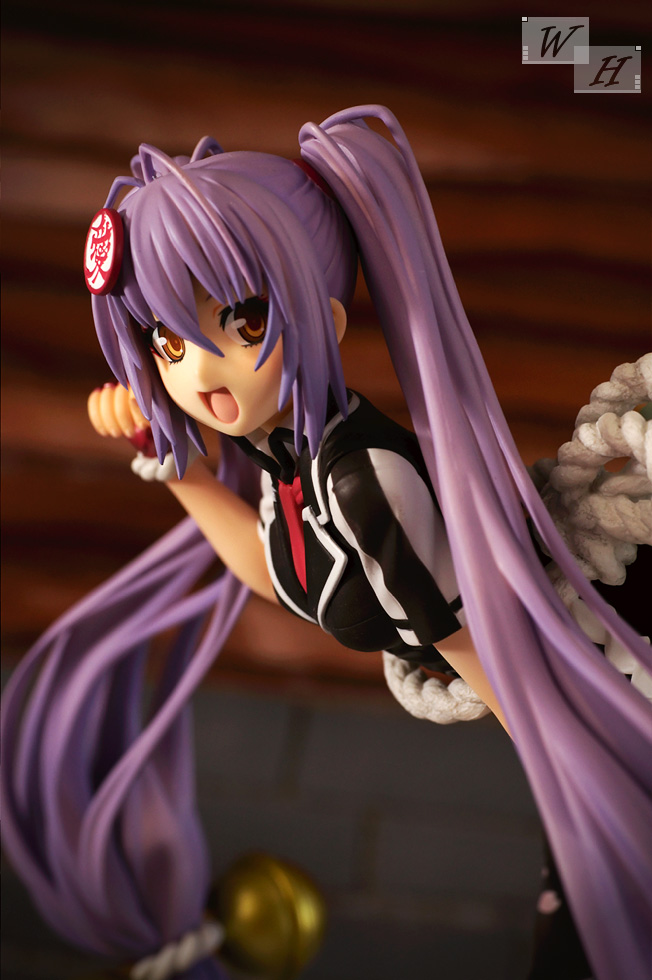 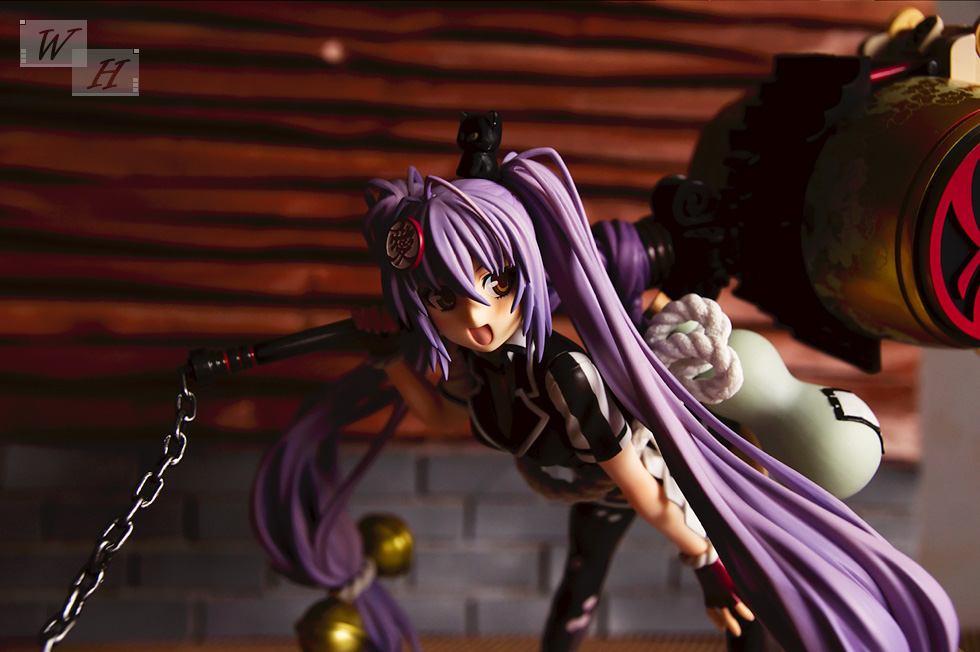 Naoe Kanetsugu is my second figure of ALTER’s Hyakka Ryoran Line up. In 2010 I got this Hattori Hanzo. Naoe is another very nice figure from that Line up from all the girls she has the most modern looking outfit with just a few traits of samurai and traditional japanese fashion elements. The school uniform in combination with the lovely stockings is very well done.

ALTER created a pretty Naoe figure with a very cute facial expression. They delivered another figure with next to zero flaws in terms of sculpting and painting. One letdown I can’t sugarcoat was the bad balancing of the hammer weapon but with my method it stays in place at least.

Other reviews of her can be found at the blogs of my valued review colleagues. 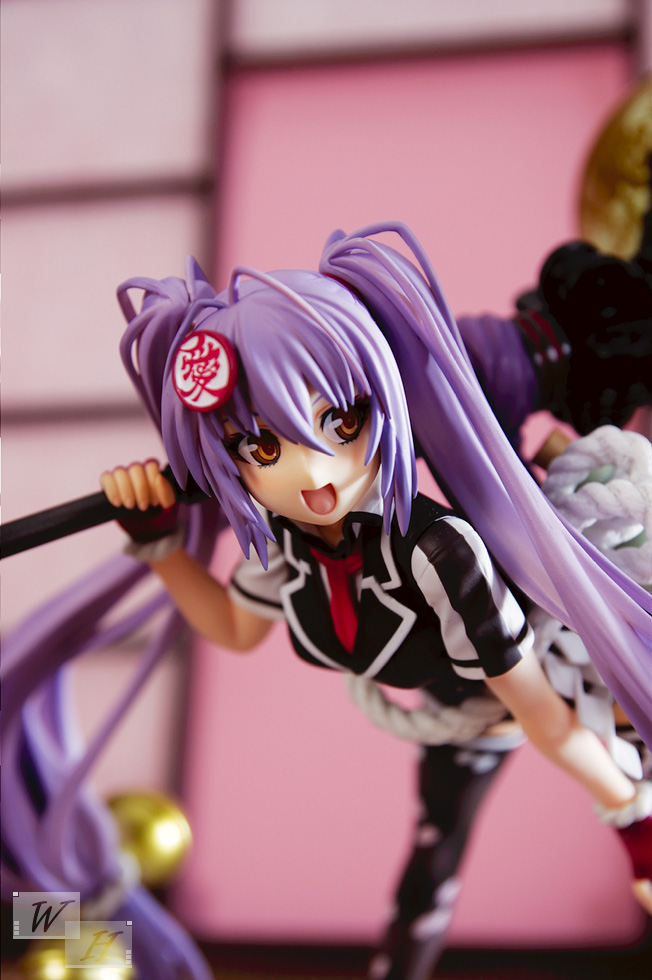 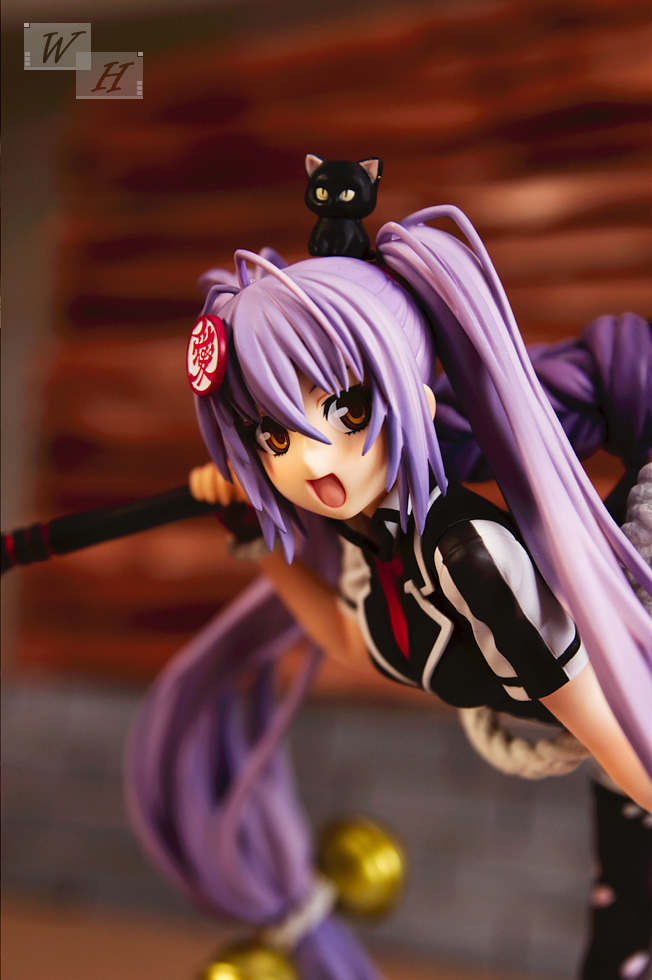 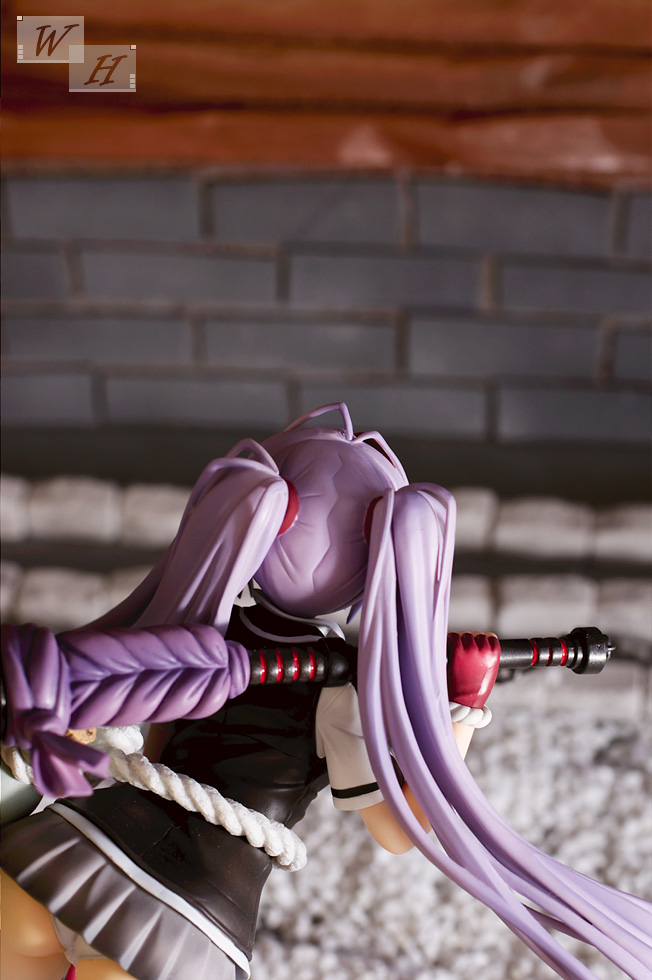 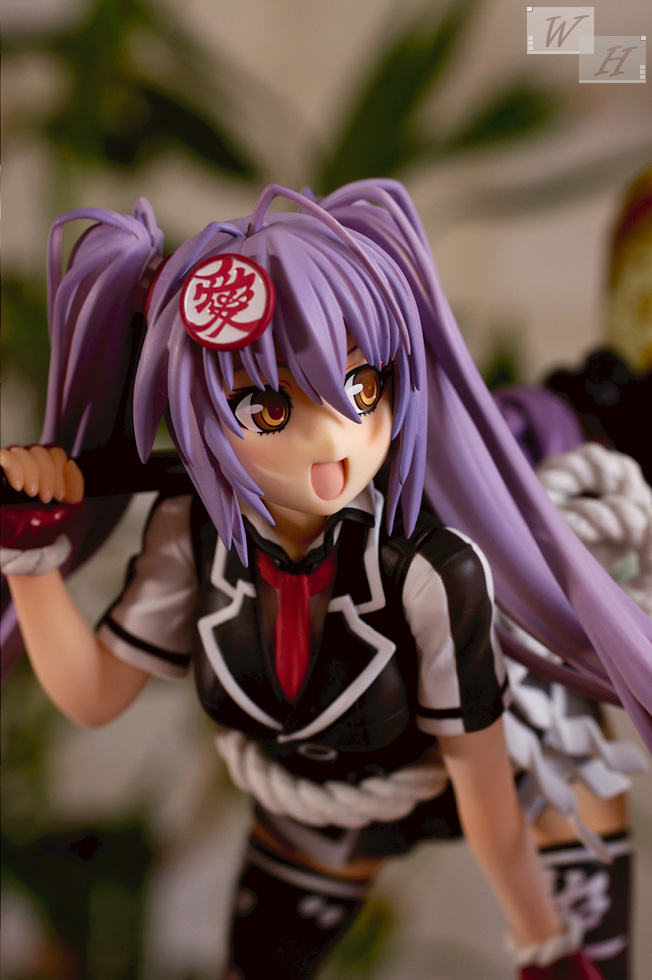 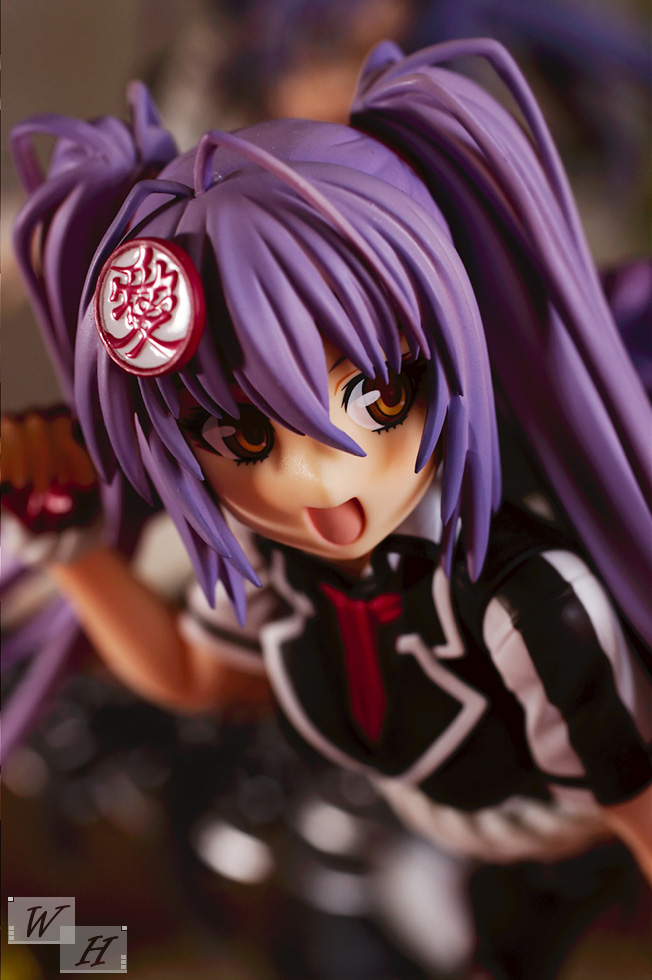