Hi today I will review Sansei Muramasa, the lovely Elf maid from Max Factory. This figure of Sansei is scaled 1/7 and has a height of 250mm, her release date was on 26th of March 2012. I nearly passed on her, but Nightmare and Exilehero wrote convincing reviews of this figure. The origin of the figure is the dark themed visual novel, Full Metal Daemon Muramasa (Soukou Akki Muramasa). It has never been translanted so I couldn’t gather much info about her role in the game, but somehow I managed to find some Informations about her character

Sansei ended up in the household of the main character Kageaki. In this world there are warriors who wear special armors called Tsurugi, which have special powers. For what reason ever Sansei can transform into a Tsurugi in the shape of a spider, she supports Kageaki in his fight against a powerful silver Tsurugi who brings chaos to the land.was born on Faerun, another dimension, she is the daughter of an elf female and a drow(dark elf) male, as half elf she wasn’t allowed to use magic so she was stripped of her magical powers after she was born. 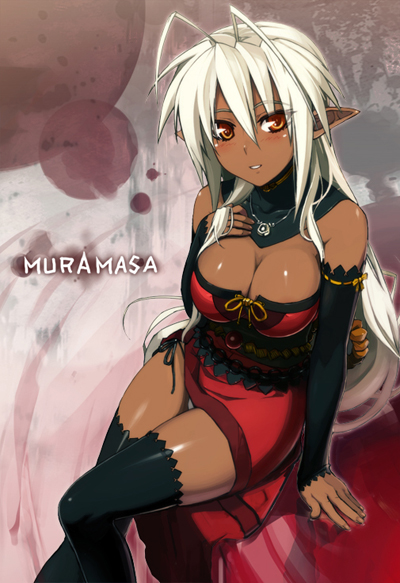 The first time the figure grabbed my attention was as she was shown as white prototype at the Summer Wonder Festival 2011. She appeared like a promising figure and I was curious how the brown skintone would turn out. Actually I was worried that Max Factory would mess up the skintone somehow. So I decided for myself not to order until I’ve seen at least one review of her.

Since I’ve seen Tiffania from Zero no Tsukaima, I love elf girls with pointy ears unfortunately there never was a good figure of Tiffania, but with Muramasa I finally found an elf girl figure that was right up my alley. I have many figures I would consider as cute, in case of Sansei I would say she’s a grown beauty, maybe it’s because of her age, she looks like a girl in her twenties. I like this physical grown up appearance. And I also like the look of maid outfits. 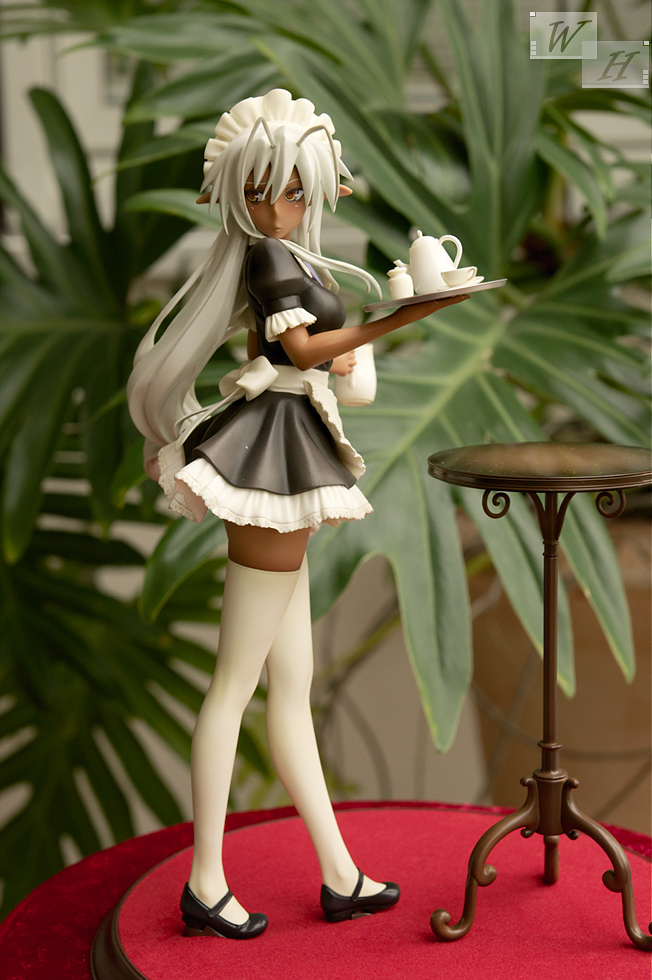 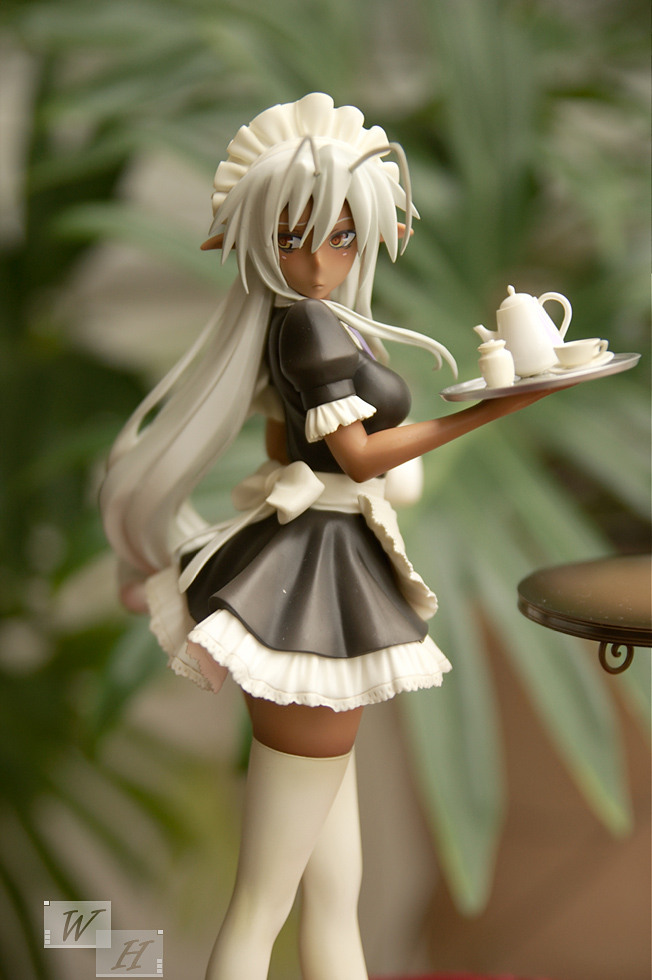 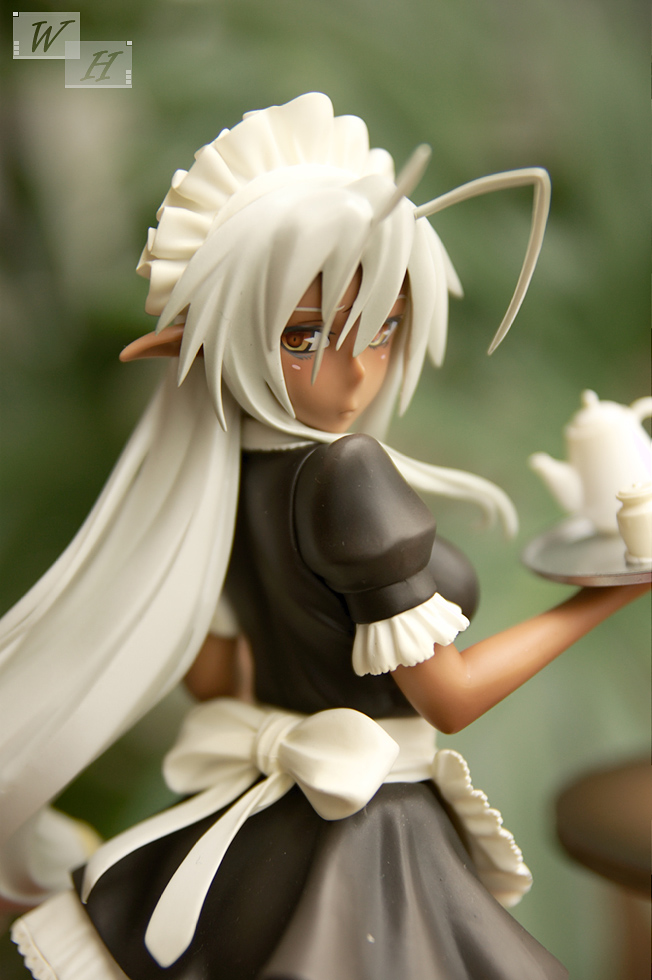 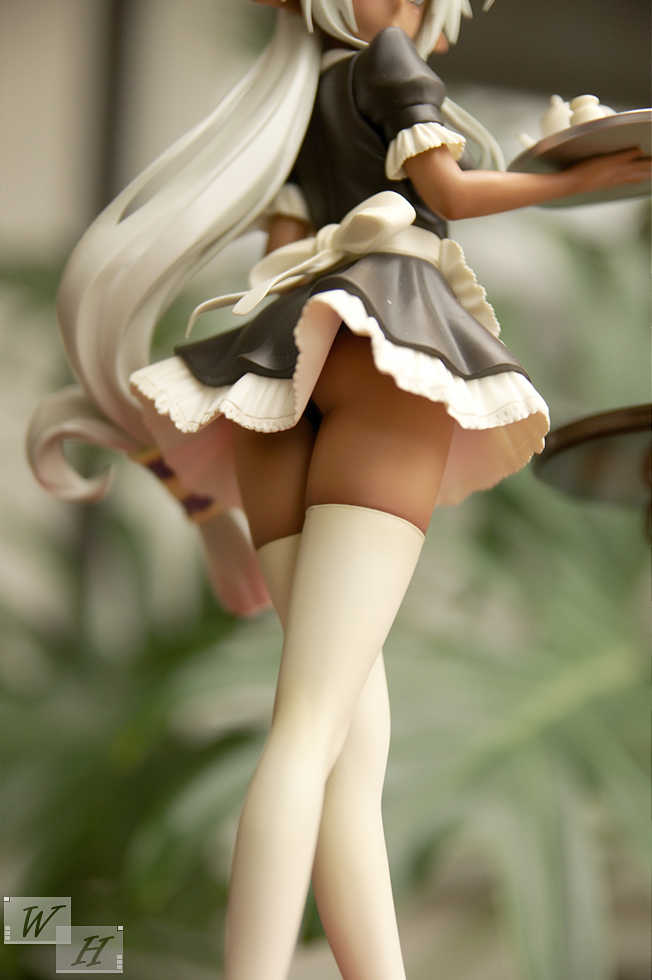 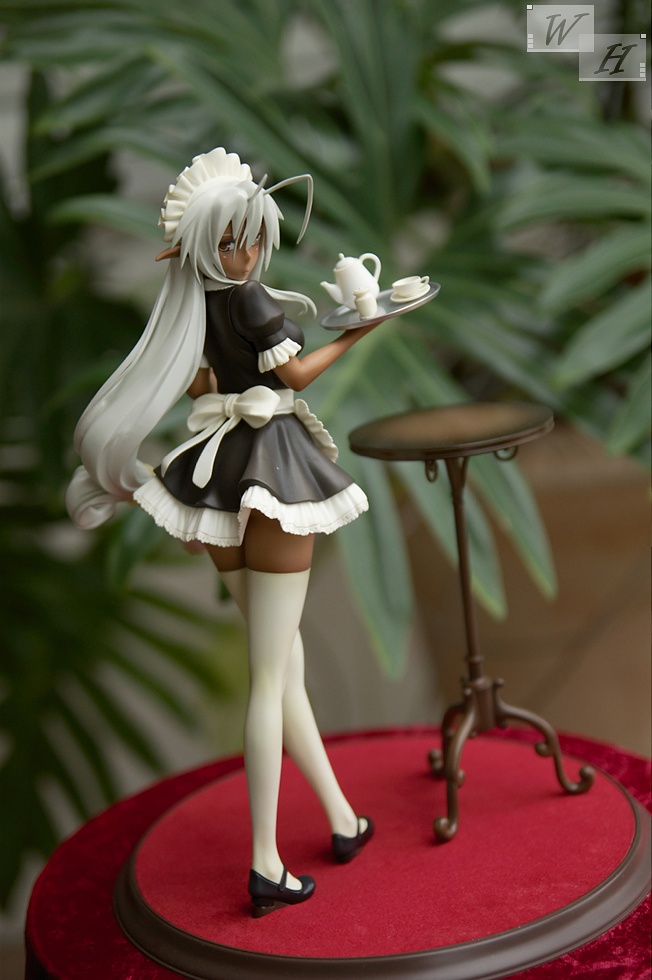 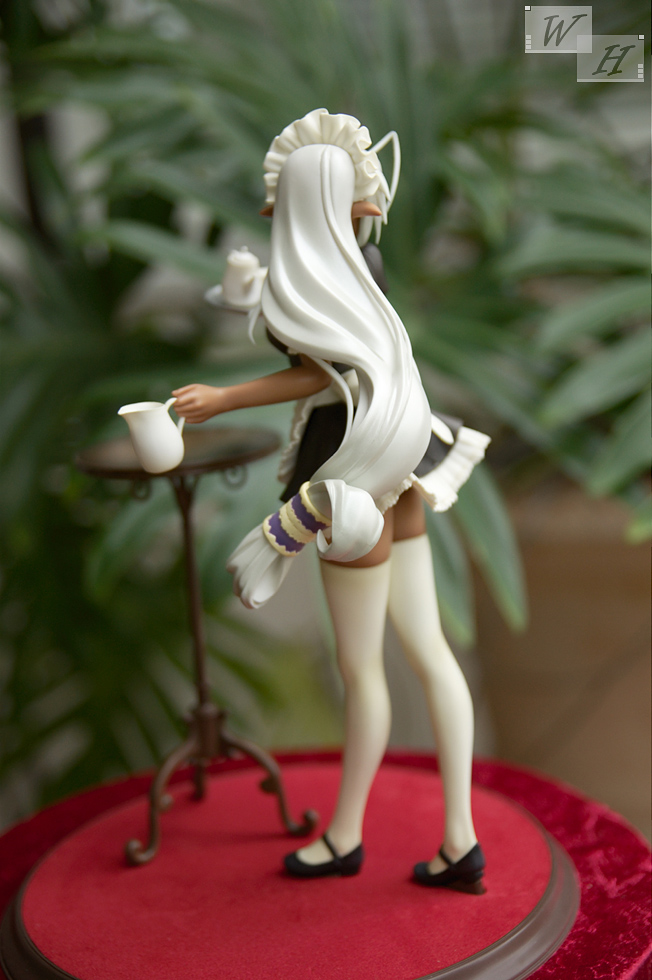 Sansei Muramasa has beautiful long light grey hair, the pearl gloss gives it a silky shine, she has to take good care of her hair with good hair care products, apparently. Her bangs frame the face in wild and spiky manner and at the front there are two insect antenna like strands.

One of the strong points of this figure is the face, which is very well done and I really like the way she is looking back over her shoulder. She has beautiful deep golden and red eyes and a nicely sculpted mouth. Despite the brown skintone the blushmarks she is showing are noticeable.

There is a variety of different moods she is showing; depending on the angle you are looking at her, words like pouting, embarrasment, uneasyness or determined come to mind. 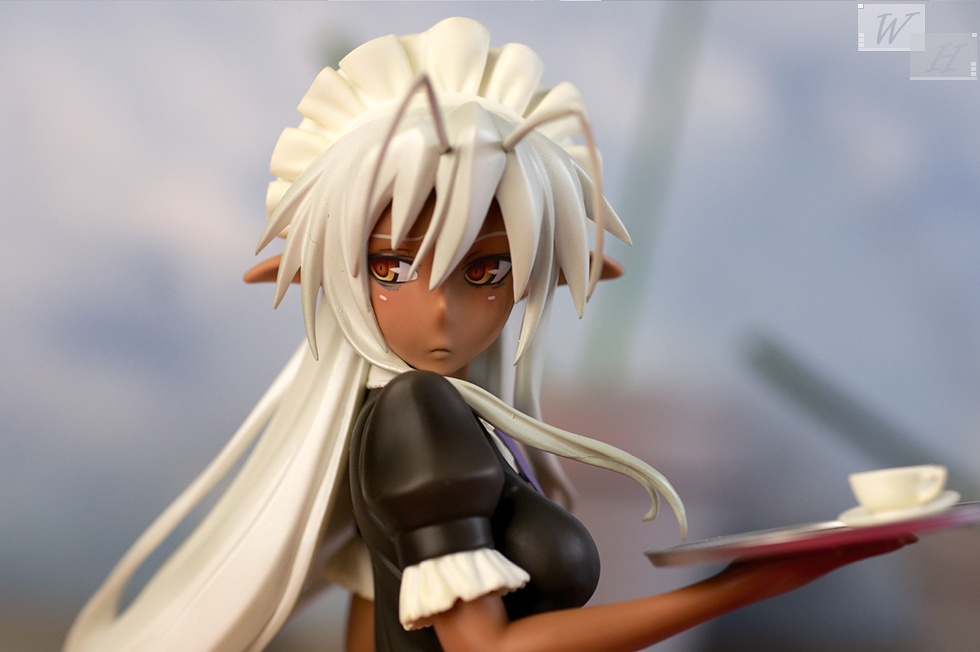 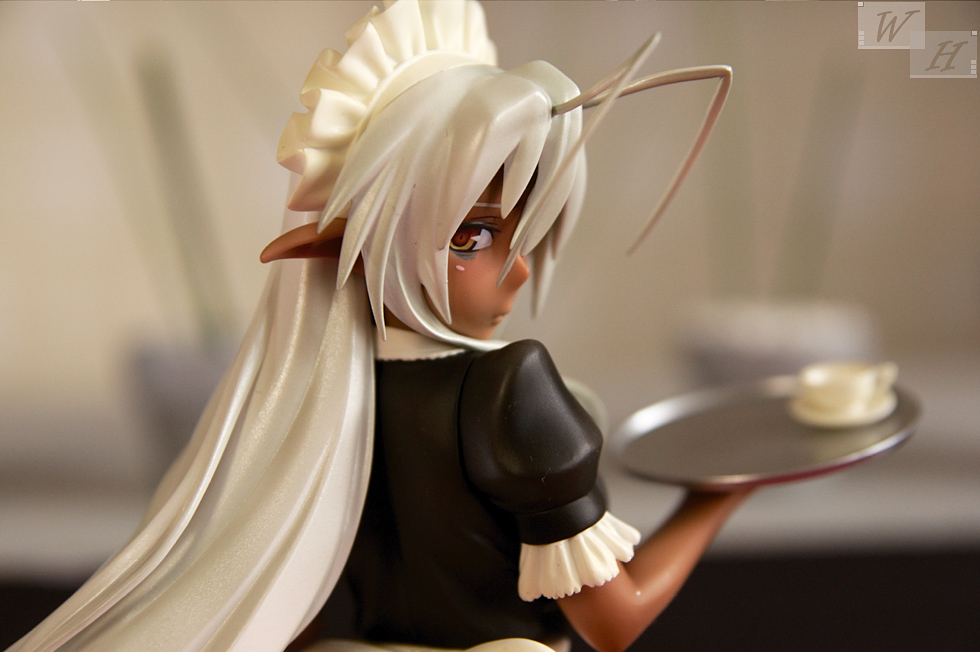 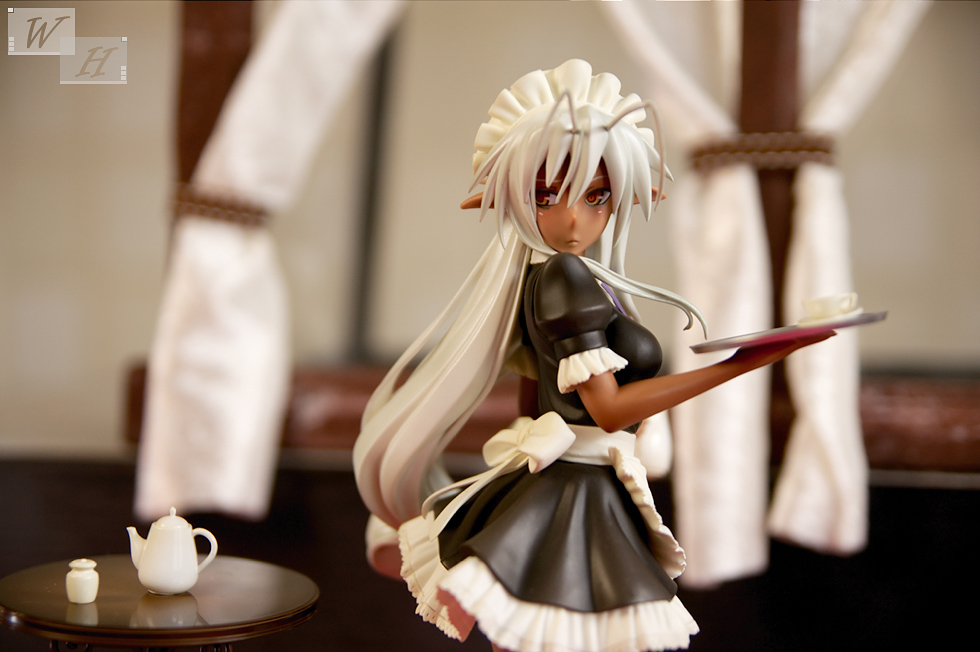 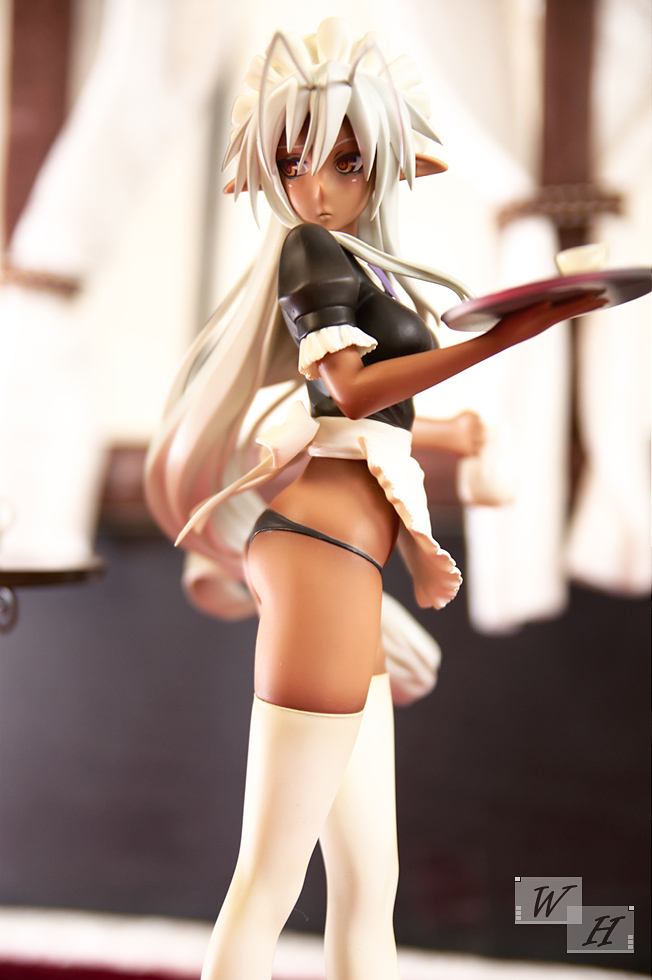 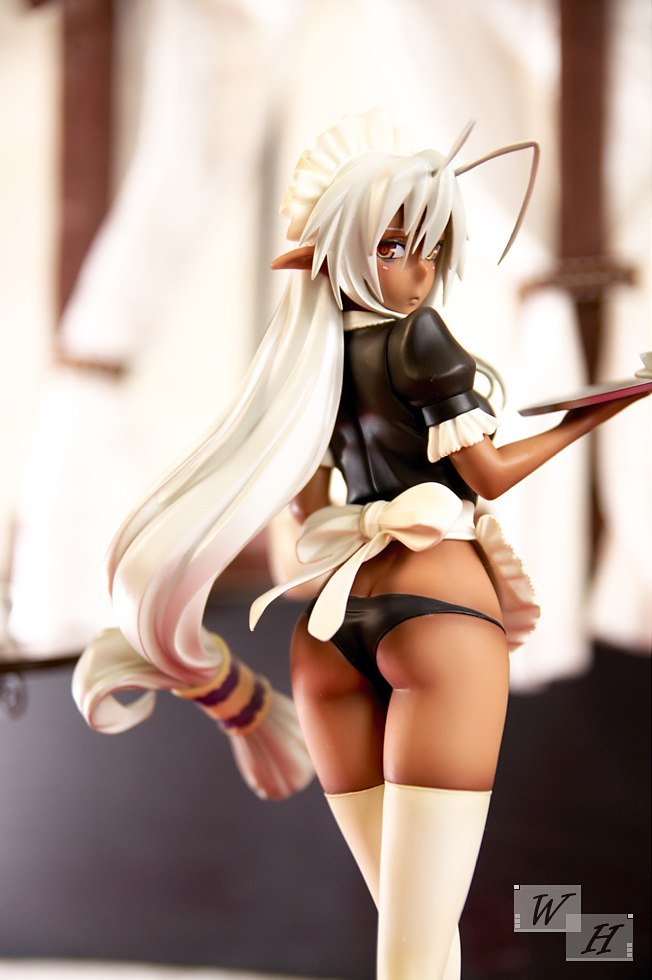 Sansei has the body of pretty grown up young lady, with super long legs, an attractive butt, nice hips and a fairly sized bosom matching her proportions, unlike Tamaki. This figure comes in a classic black and creme white maid outfit, it’s a rather modest outfit only the skirt is a little short. Muramasa is of course no combat maid, Max Factory adapted this figure from one of the CG artworks inside the game, maybe one of the lighthearted moments there. 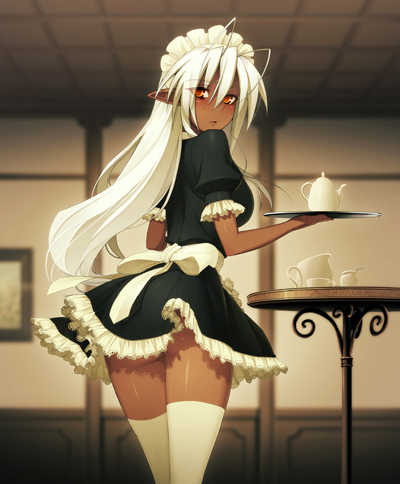 The shirt she is wearing has short sleeves with white frills at the ends, revealing half of her nice brown arms. The skirt is sculpted with a dynamic flow and the underskirt also has detailed frills. She is also wearing creme white stockings that accentuate the upper area of her thighs very well.

The pose from her illustration is very well captured and creates a convincing atmosphere, the position of her legs and the way she carries the tablet, show that she is concentrated and wants to do a good job as maid to receive some praise from her master afterwards or she just thinks “Master, go home! before I cut you into pieces” XD 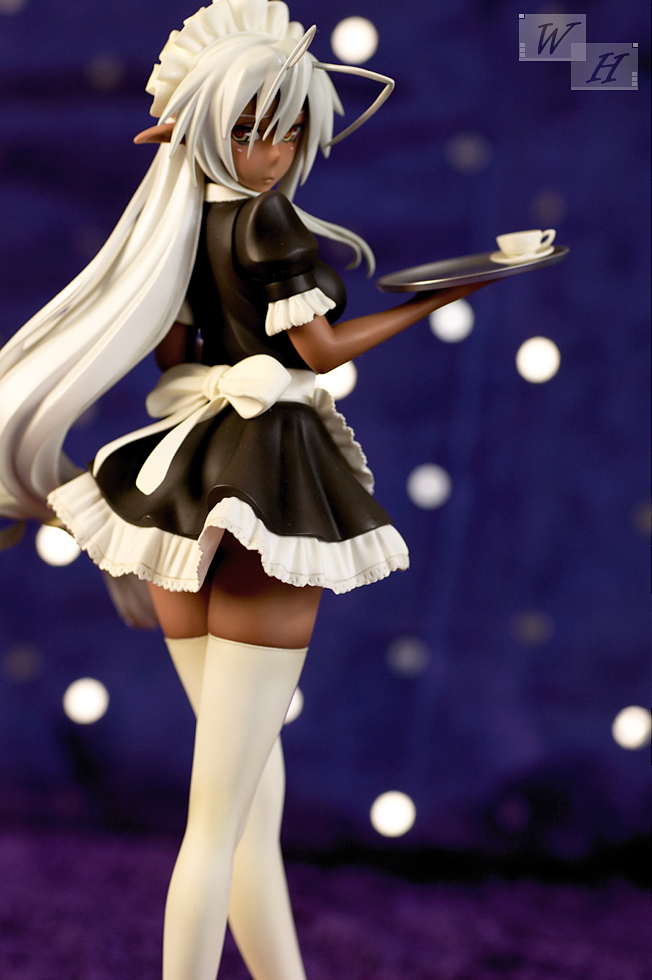 A cast off option was also included, which allows you to take off her skirt and display her in a breezy manner, unfortunately the apron she is wearing around the waist still covers her front 🙁 Anyway, a nice little detail is the fancy, adult underwear of Muramasa, the detailed front has a pretty pattern and her cameltoe is nicely accentuated, its just a minor detail, but I like that ^^ 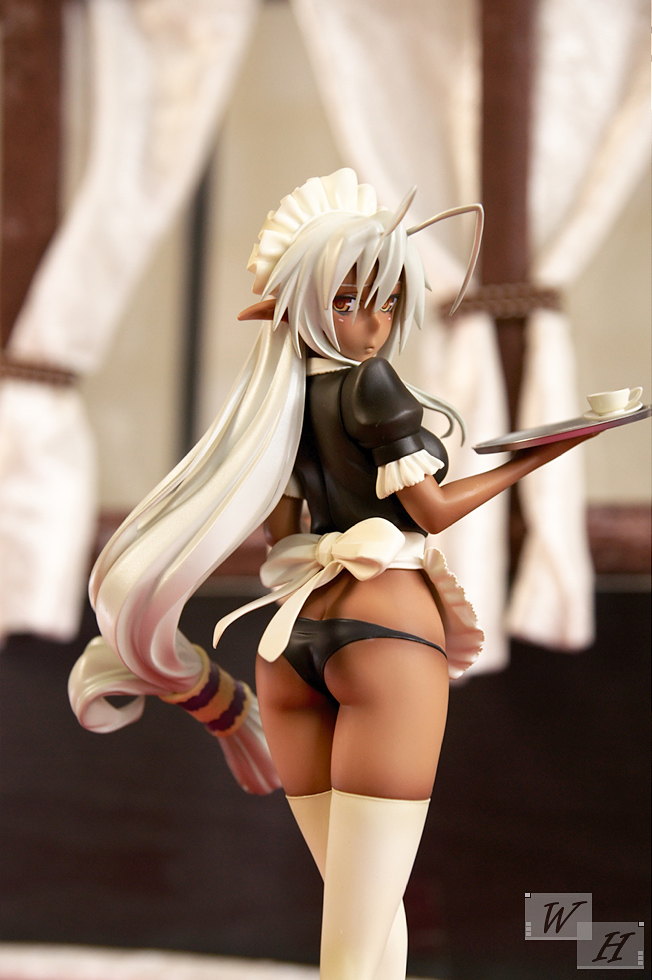 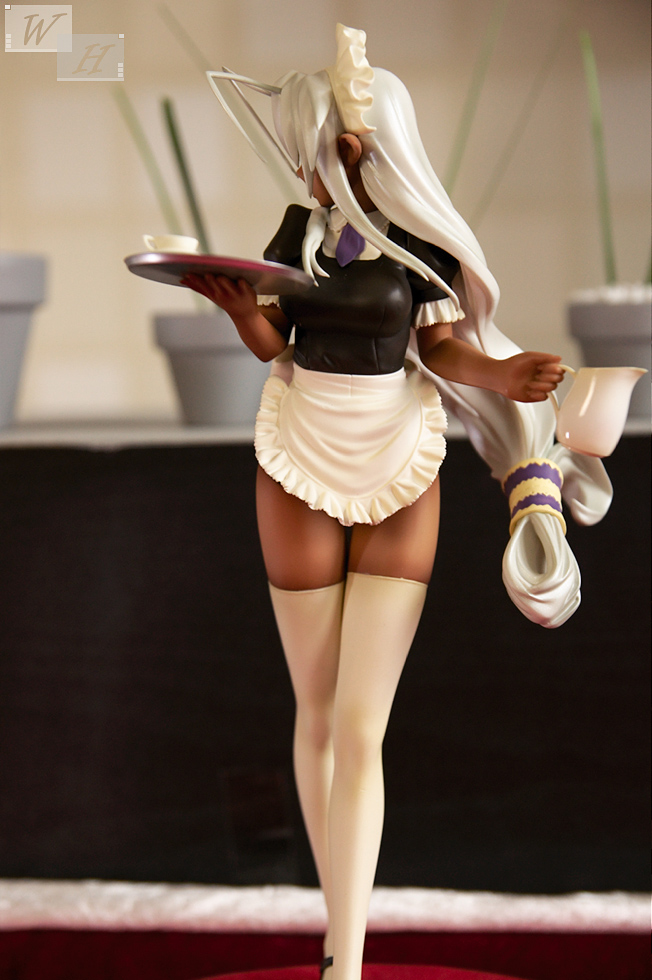 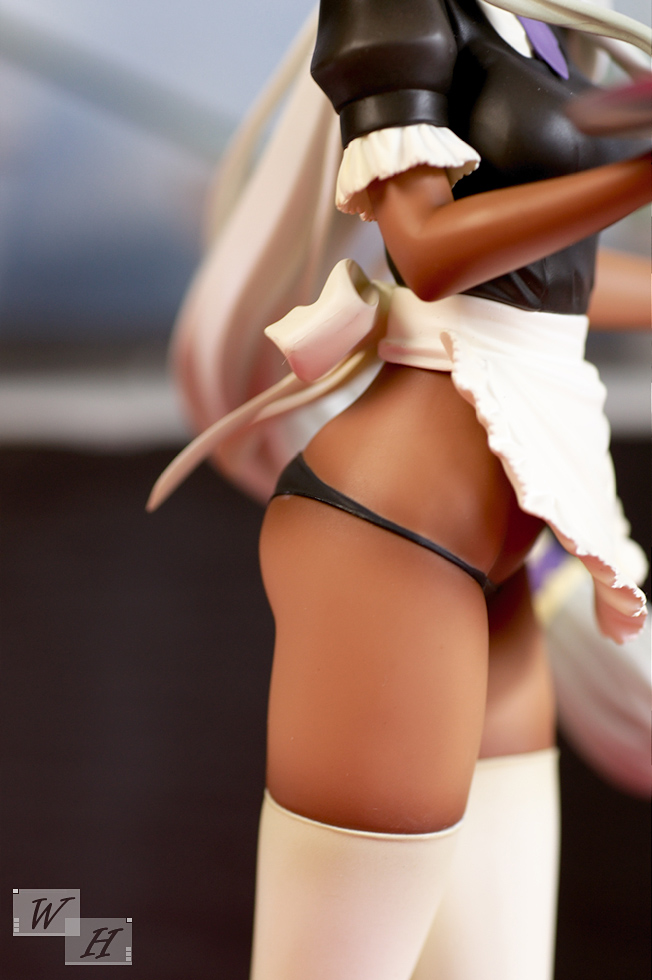 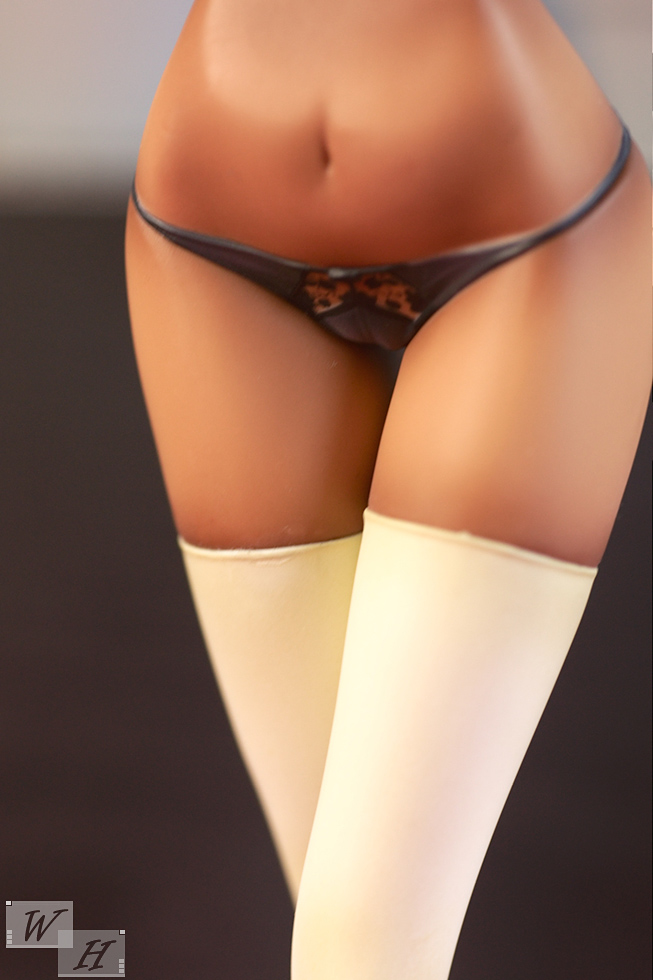 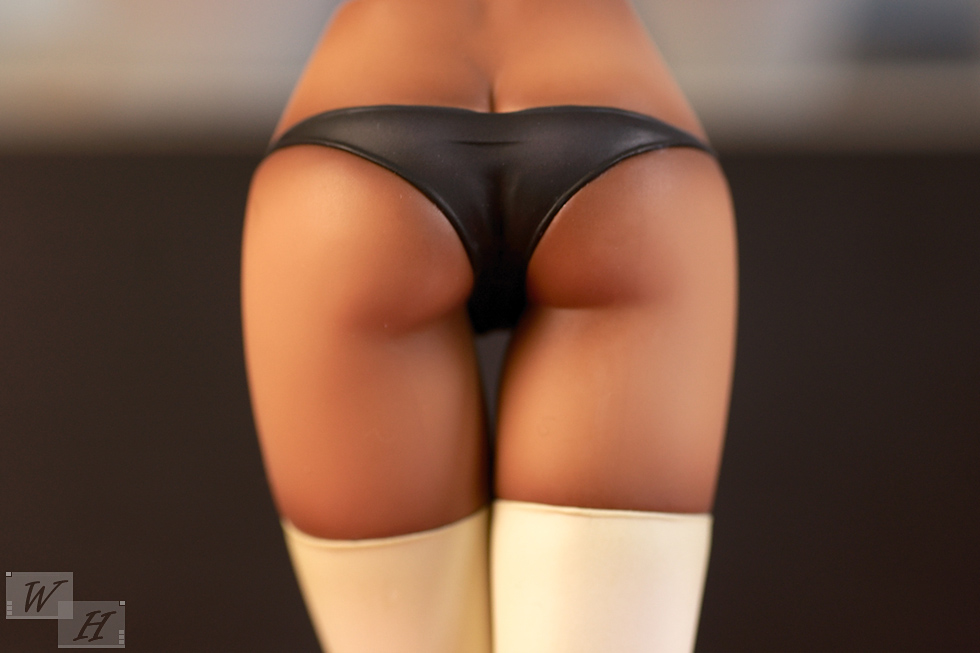 The base is a nice looking round brown disk with a big diameter and red felt as floor. The figure comes with some nice accessories, there is a lovely table which looks like it comes from directly from an classy cafe house. There are also some nicely scaled dishes consisting of a coffeepot, a sugar bowl and a single cup with saucer, they can be placed on the table or onto the tablet Sansei is carrying. unfortunately Max Factory put no magnets into them so they are really loose items which might get lost one day. I decided to use modelling clay to keep them in place. 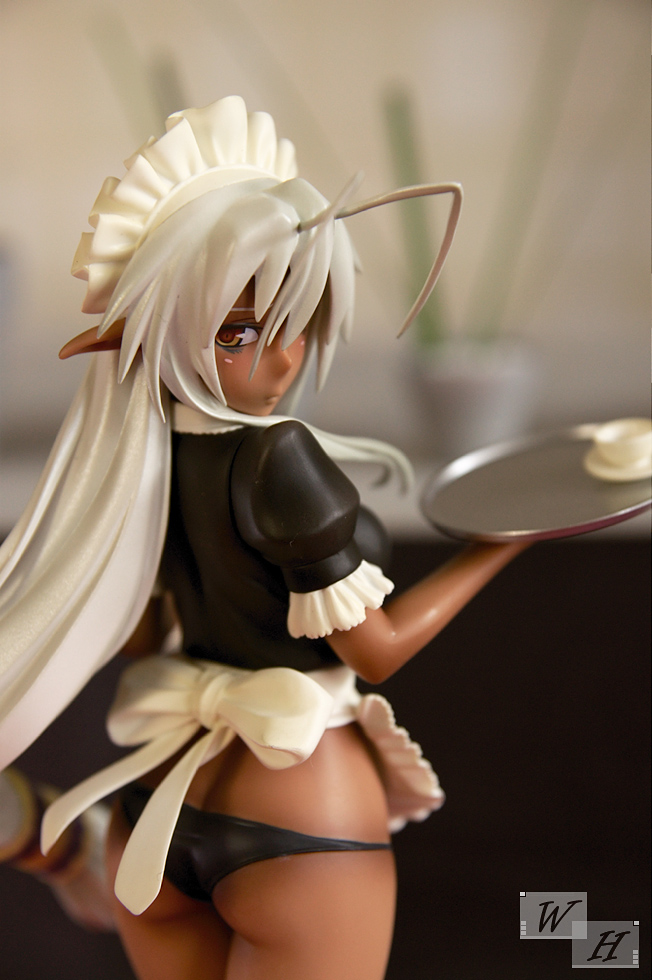 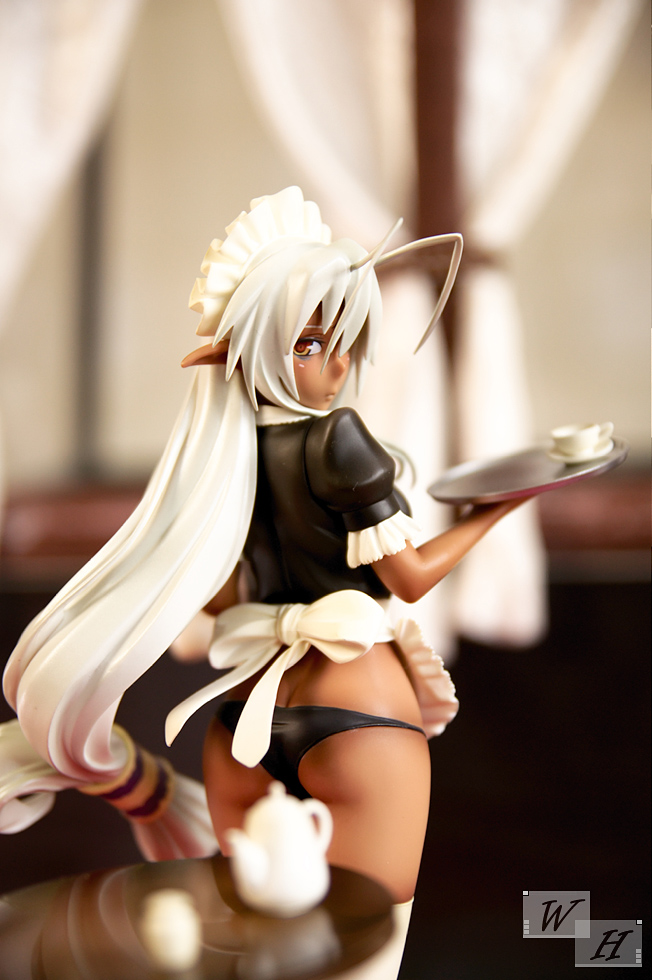 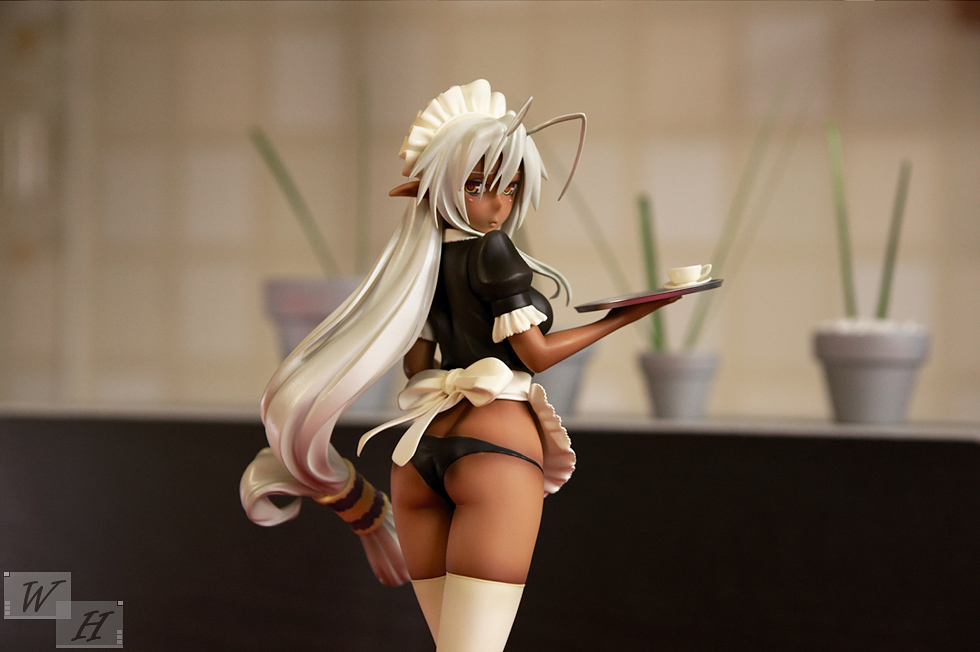 Im very pleased with this Sansei Muramasa, sculptor Shining Wizard @ Sawachika and Max Factory created a very nice and pretty Maid figure. Sansei Muramasa shows a strong facial expression and her body language is convincing as well. I was worried about how the skintone would turn out, but I was worried for no reason, it looks great and has some nice shading.

As a fan of pretty girls, maid outfits and elfs this figure purchase was the right choice for me.
The fancy base, the accessories like the table and the small dishes turn this figure into a great package.
The cast off option is a nice feature to make this maid a little sexier if you like to, since the black fancy underwear and the lower body are very appealing.

Thanks to Figuya.de I was able to order her last minute puttygen download , in the japanese shops this figures was already sold out at that time. It would be nice to see more figures from Soukou Akki Muramasa since all the female characters there look nearly as beautiful and enchanting like Sansei. 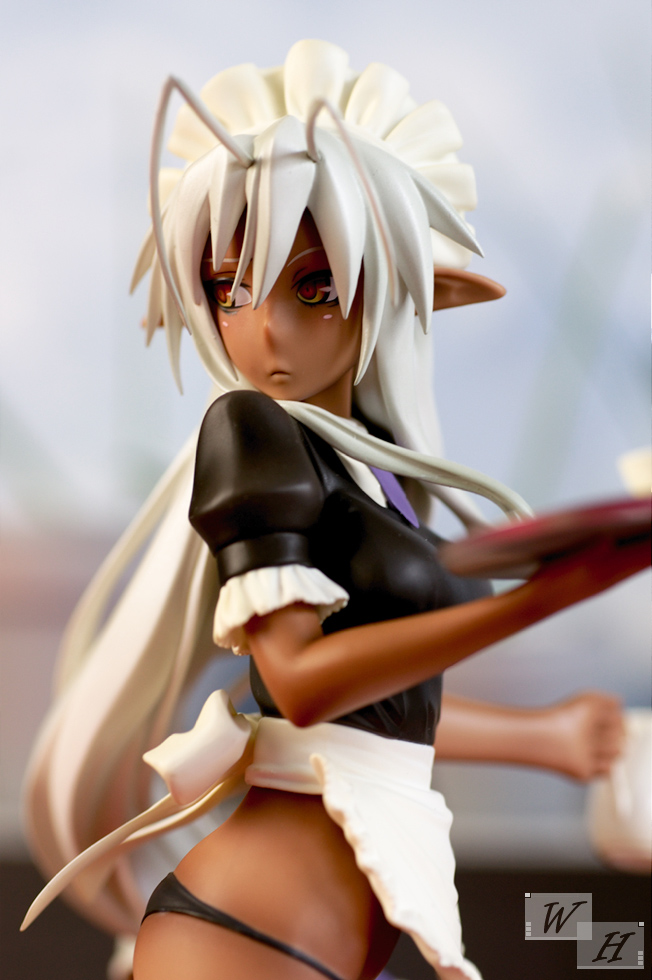 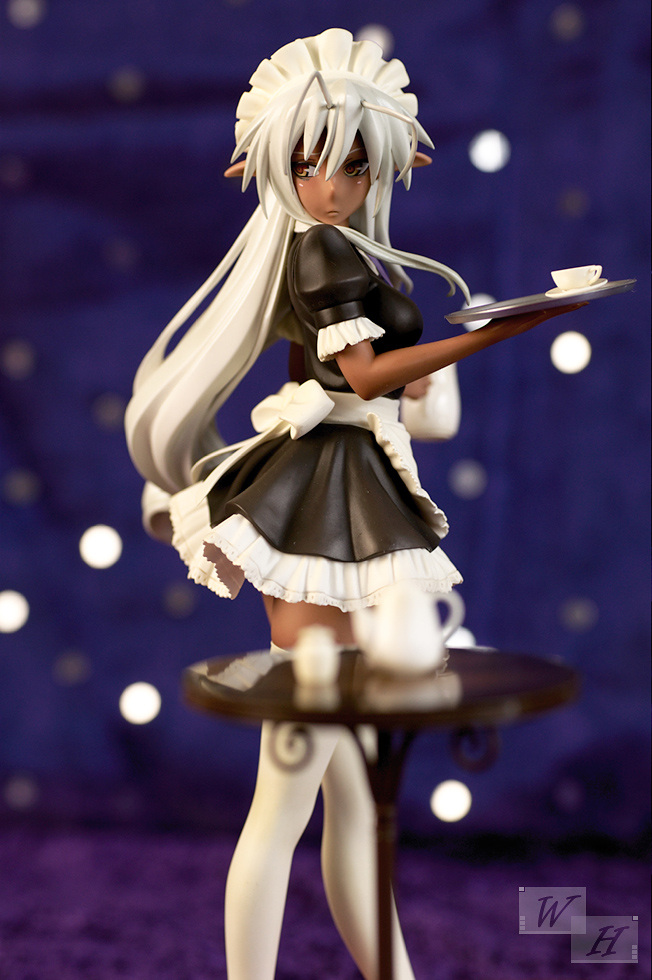 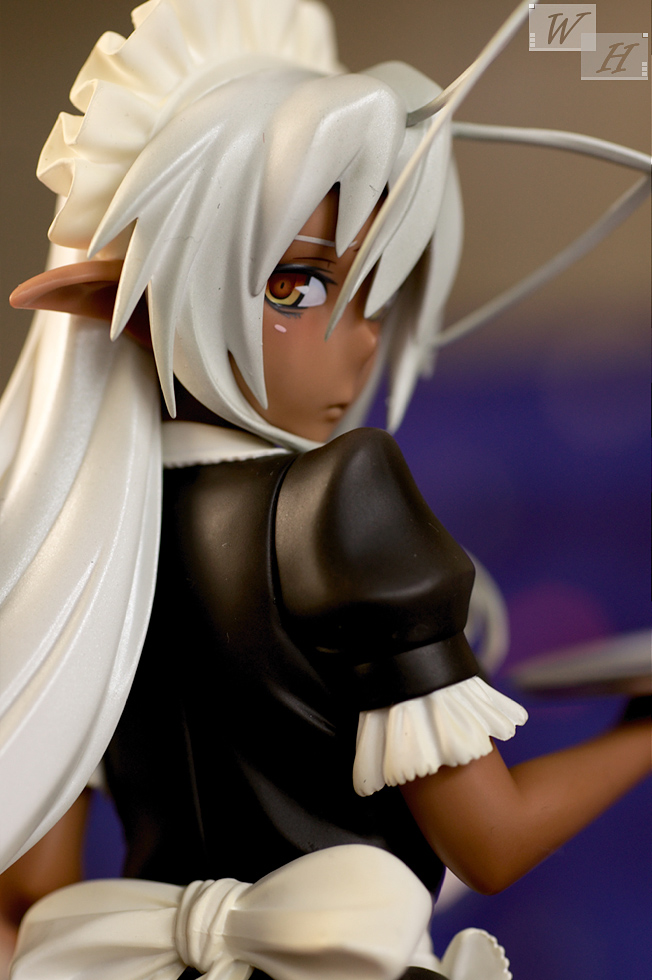 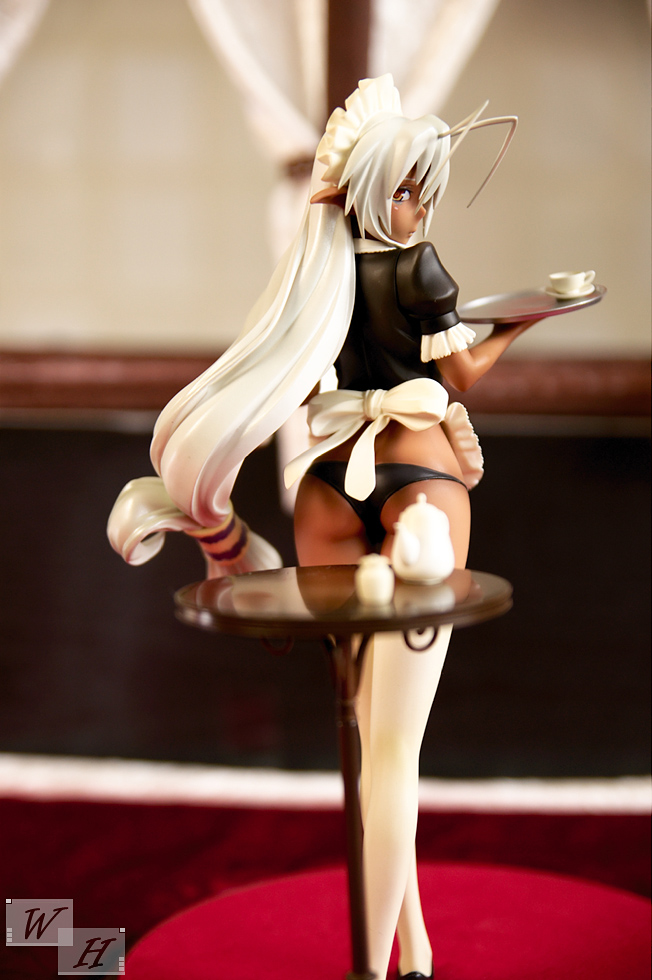 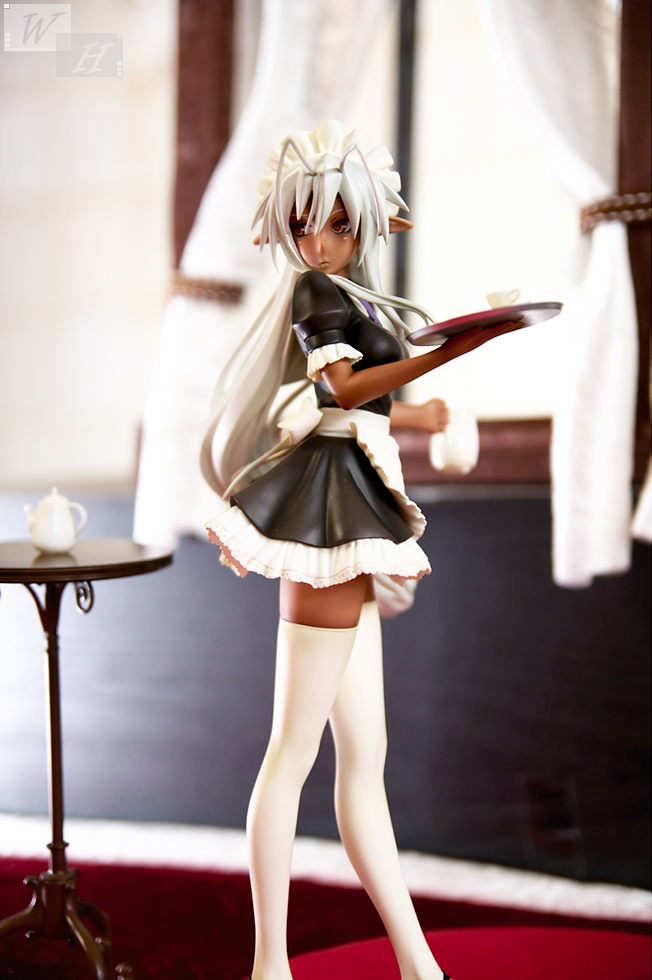