Haha after all the the ecchi figure reviews recently it’s kind of a combo breaker.

This figure of Sayaka is scaled 1/8 and has a height of 20 cm, her release date was in July 11th.
Her origin is the very popular anime Puella Magi Madoka Magica which is considered to be a revolutunary anime inside the magical girl genre. I was happy with the magical animes before, but oh well who asks me anyway. Sayaka Miki is the best friend of Madoka, the main heroine of the show. Sayaka is a very kind and cheerful person, she has a tomboyish personality and likes fooling around. In dangerous situations she protects her small fragile looking friend Madoka. 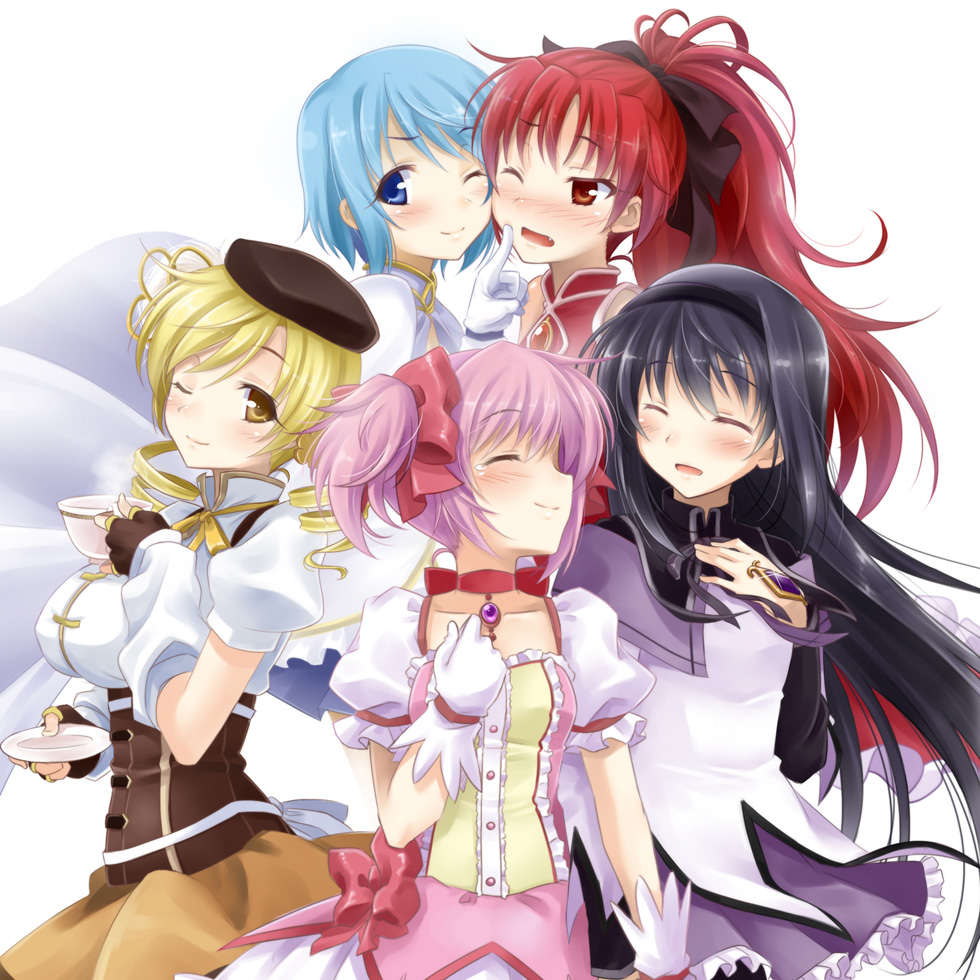 After the anime ended people wished for cool and dynamic figures of the characters in their fancy costumes, there didn’t pass much time until GSC presented their figure lineup of this anime.

Well, how should I say it all of them appeared rather underwhelming in terms of posing, they could have been adapted from a more interesting illustration than the one which was used.

Nevertheless these figures still had their lovely outfits and a very good quality. Additional to that the Puella Magi Madoka Magica girls also resembled the look of the anime very close.

From the figure line up Sayaka caught my interest the most, I really liked the design and colors. She wasn’t my favorite character, in case you’ve watched the anime you might know why. Her naive thinking of being a magical girl was a bit odd, lets say she wasn’t suited for that job.

I found a nice part of an  Staff discussion where the persons in charge of crucial elements of the anime were talking about the character of Sayaka.

[spoiler] SHINBO: When the filming was done, I started to feel “she is such a poor girl,” and moreover when I listened to the performance during the after-recording session my heart gradually started to ache more and more, and I started to think “couldn’t there be a little bit salvation for her?”. At first I took a rational point of view, thinking so she is (written as) such a character, but gradually my emotion gushed out and took over.

UROBUCHI: And then I answered, “That would be impossible now.” (LOL)

UROBUCHI: Guess I bullied Sayaka a bit too much (LOL). But then the reason why I do not feel that sorry for Sayaka is this thing, that I just do not feel that even if she hooked up with Kyosuke that girl would really be happy ever after. Most likely Kyosuke is a guy who will stand her up in dates and go to practice the violin, I think. 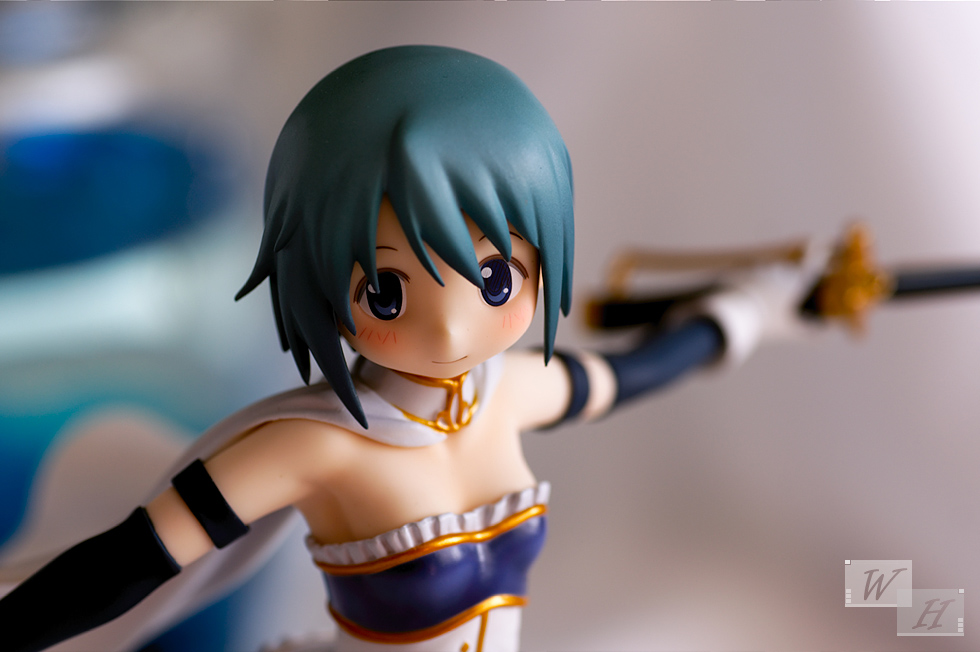 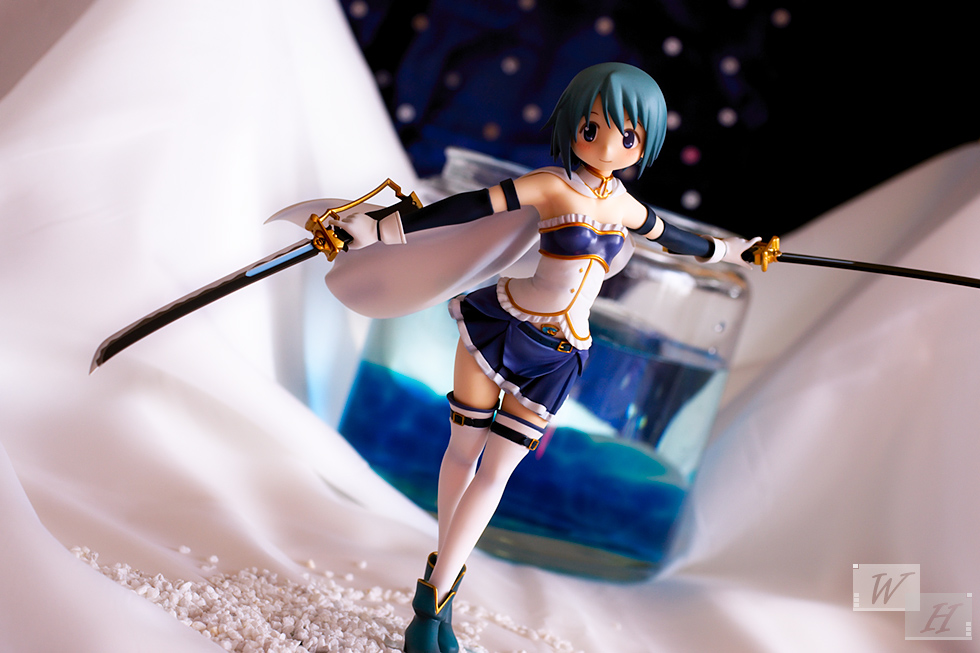 Ok, sorry for the slightly off topic talk now I’ll start with review part of this Sayaka Miki figure.

The first thing that meets the eye is her hair, look there is no seamline to be found. Her hair is nice and smoothly sculpted with the strands in the right position the hair resembles the look from the anime very well. Nevertheless there was a shirtstorm about the changes which were made to the final figure in terms of haircolor. People were cursing “seagrass“, “too dark“, “GSC betrayed“. 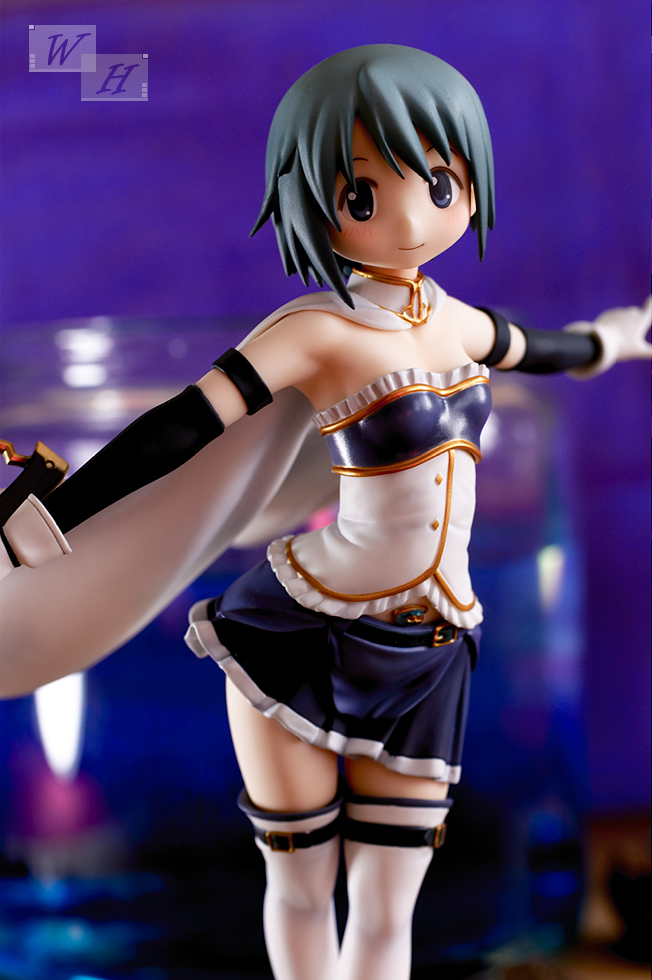 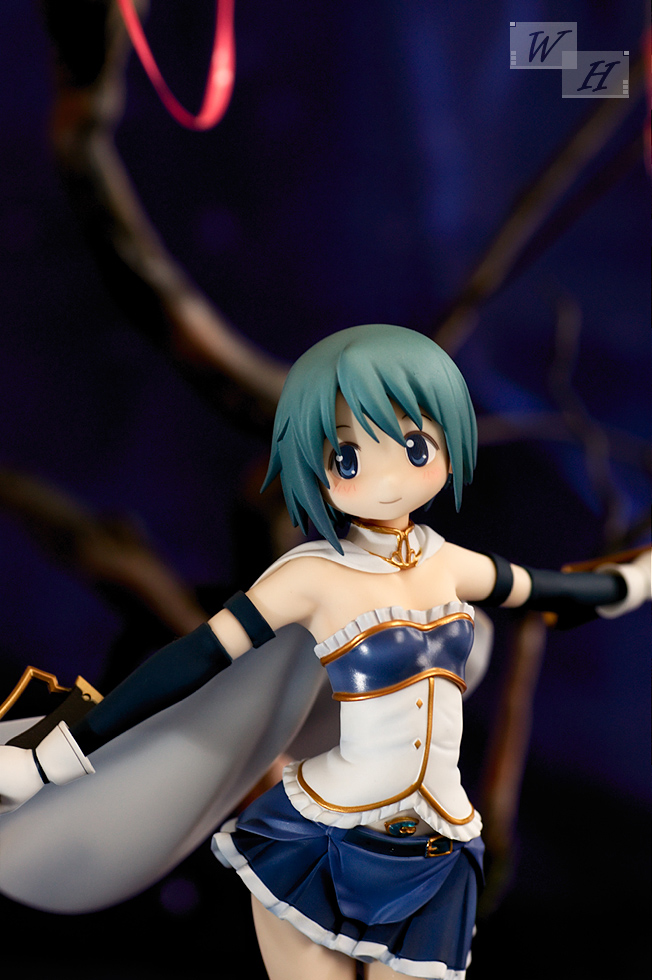 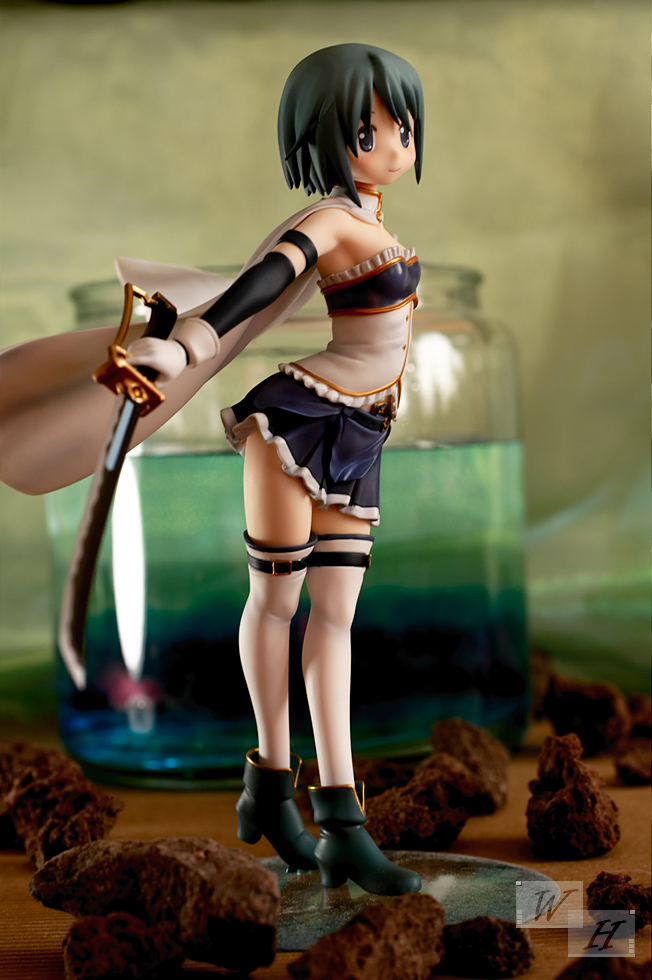 I rewatched some episodes of this show and now I would say that this figure has the right haircolor, a mixture of blue and grey, if at all the prototype had the wrong too bright hair color.

Im really satisfied with the way the face turned the eyes with the partially dotted iris and pupil.  The unique 2D character designs of the Puella Magi Madoka Magica appear to be a bit more difficult to put into 3D shape, but  it wturned out very nice in this case, there is not really an odd angle were Sayaka looks disappointing. Furthermore this figure features all the facial details from the anime character design, like the blush marks and the dark lined mouth. 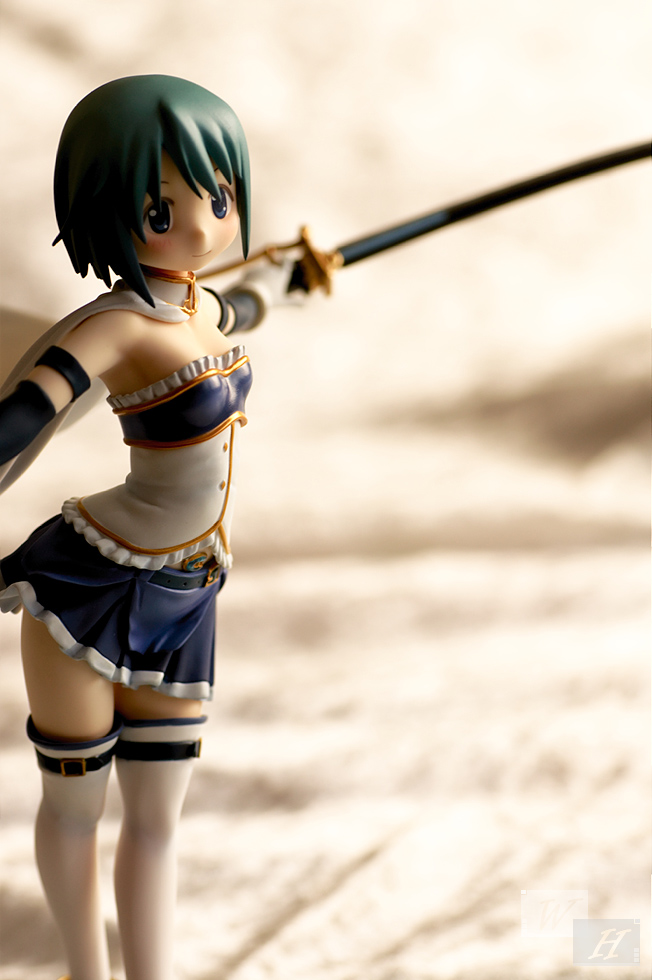 Well it might be a bit odd, that the face still looks kind and happy, even when she is wielding the two optional cutlass swords. An optional head would have been a great feature to match the look of a girl in a fancy suit with sharp weapons weapons in her hands. 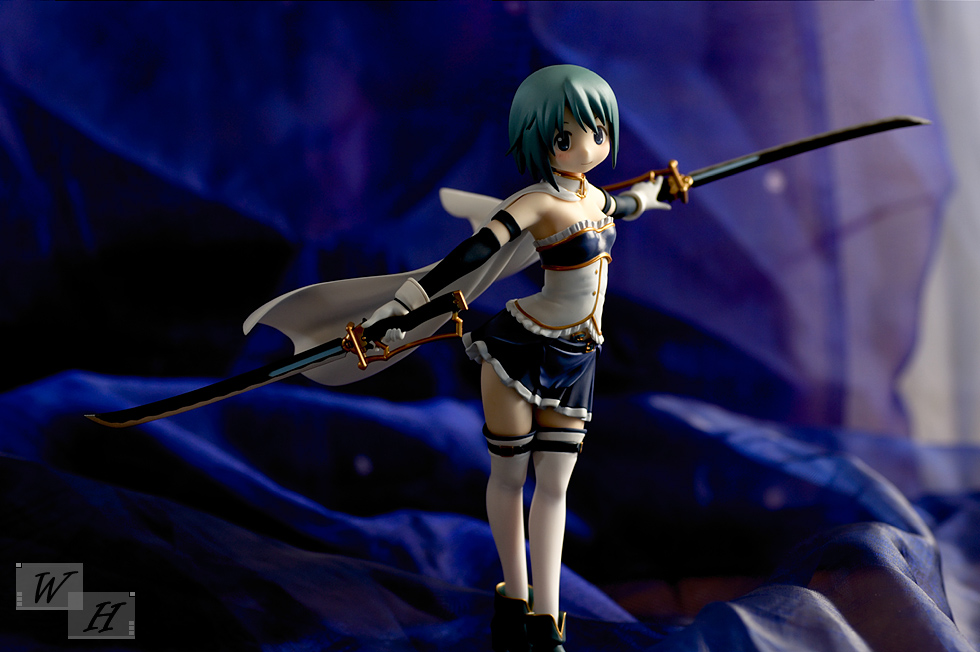 From the girls in Puella Magi Madoka Magica I liked the outfit of Sayaka the most I guess it was also the main reason I ordered this figure. The design is a little on the tomboyish side but also has a prominent female appearance. Her outfit looks more suited for close combat than the one of Mami or Madoka for example. Her top is a shoulder free corsage resembling dress, the quillings above and below are kind of cute, the top exposes her belly with the blue C symbol. 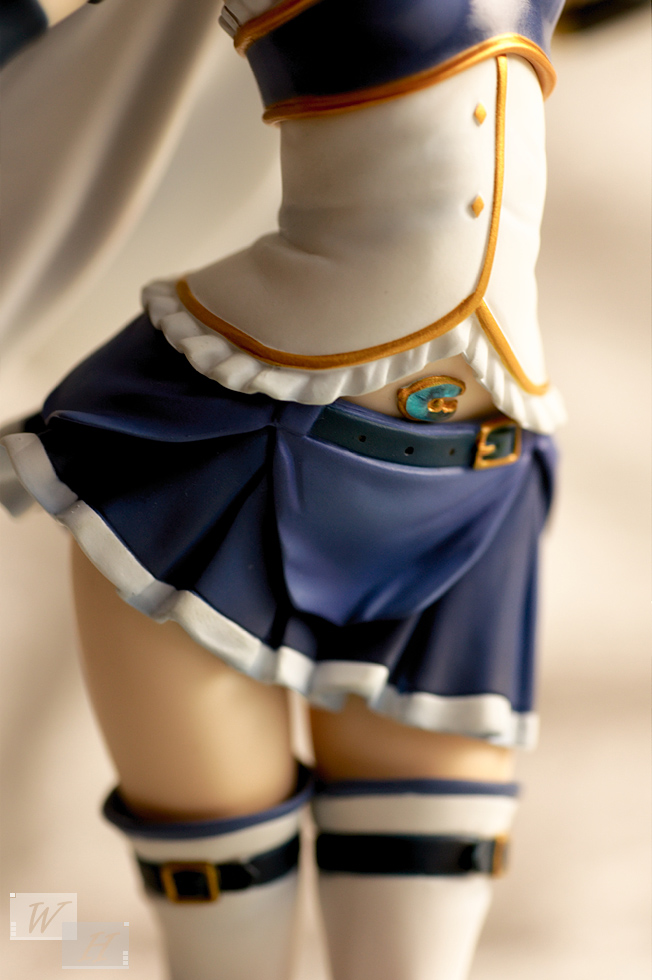 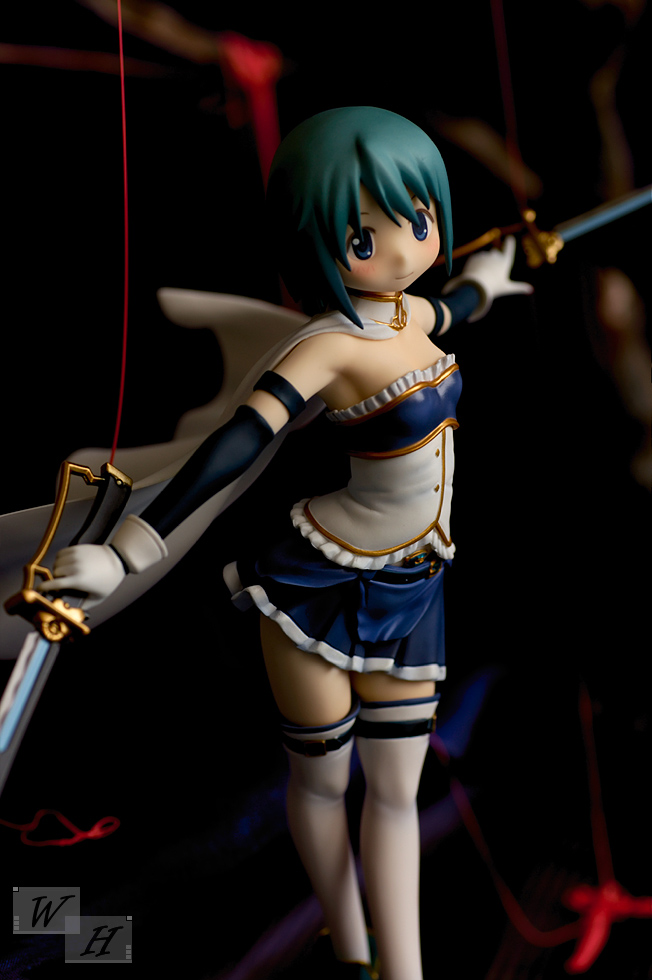 The white cape gives Sayaka  the extra  chivalrous touch, I like the flow of it a lot. At her nice skirt there are these impressively detailed creases. Im a big fan of her stockings with the blue belts around her thighs. I really like the color combination of navy blue, white and golden details.
The colors and the golden lines and buckles are applied in a quite accurate way.

Quality wise there is not much to complain about in terms of outfit and painting. 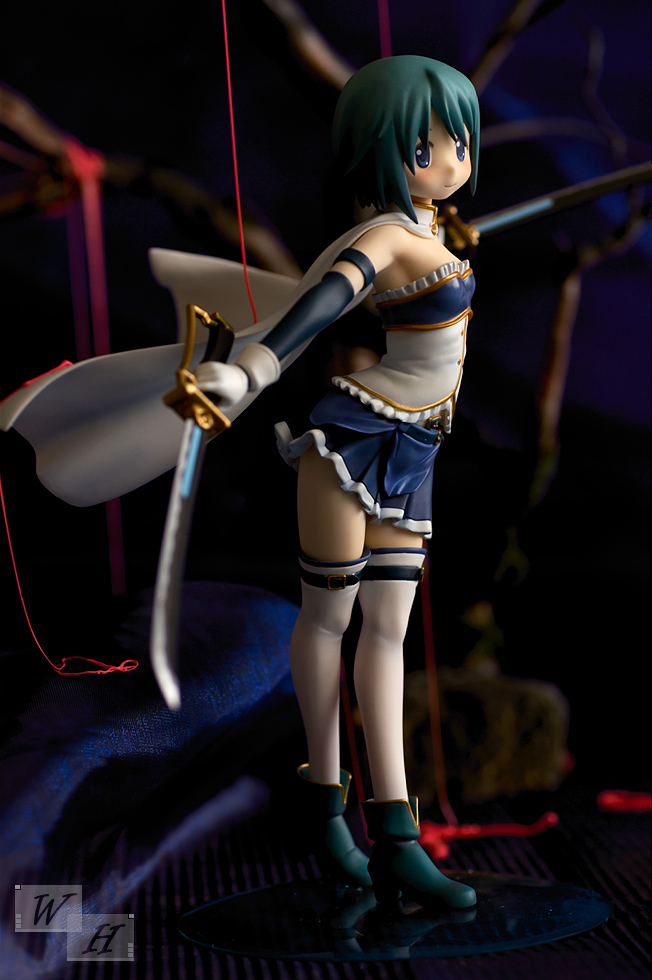 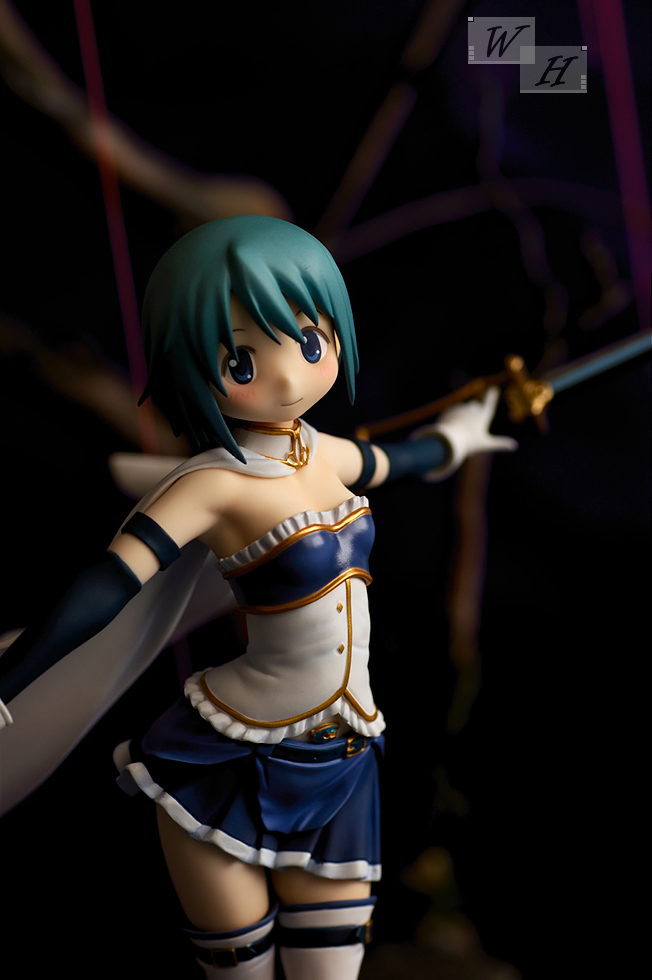 Her weapon looks like a combination of a cutlass, a weapon often used by Naval forces, and a katana. The long straight blade indeed resembles a katana. On the hilt has the typical cutlass look, in case you are wondering about the look of the hilt, no there is no trigger function it’s just a design element. The base is a small transparent diesk with a blue radial gradient effect.

Sayaka is actually captured in a happy situation with her arms and hands stretched out it looks like she imitates a plane, while having a kind smile on her face. GSC decided to give this figure a second hand option, where Sayaka can hold her two cutlass weapons. In this stage the face expression is a bit too friendly I would say but overall she looks nice in both display options. 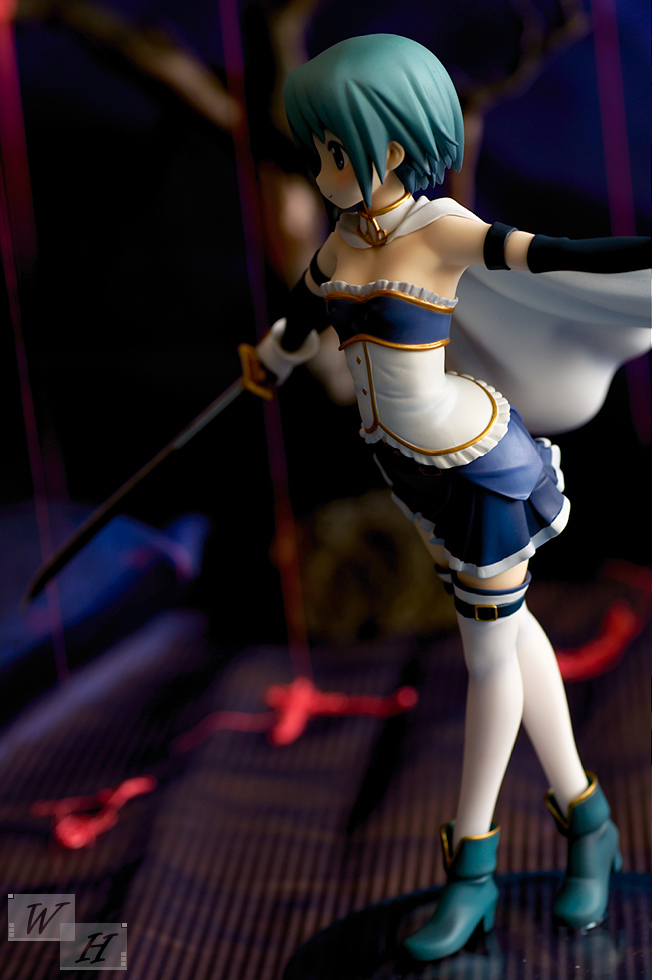 Typically for the Puella Magi Madoka Magica anime Sayaka has a big wide head, she is 13-14 years old so her body is young and petite. She was crafted with care, there are nice armpits, also the transition from arms to body looks quite nice, her shoulder free outfit slightly reveals one of her collarbones and her budding chest. Sayaka also has nice legs, they are accentuated by her stockings and the crossed pose. In my opinion she has the best pose of the bunch.

I’m glad about this purchase and that I didn’t cancel her order, like I intended close before the release. I like her overall design a lot, a pretty head, a nice body and very nice colors. Even though I’m still not a big fan of her character, she is a beautiful figure and that is what counts. She has very nice details and the quality of sculpting  and paintjob are very well done.

I purchased this Sayaka Miki figure for 5,750 Yen at AmiAmi, now she is sold out unfortunately. 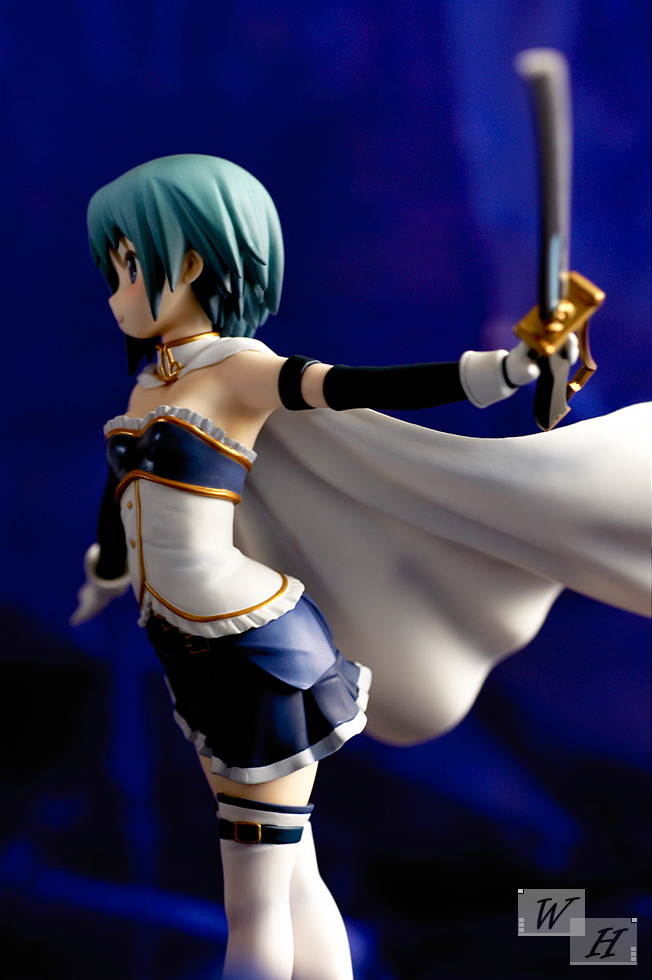 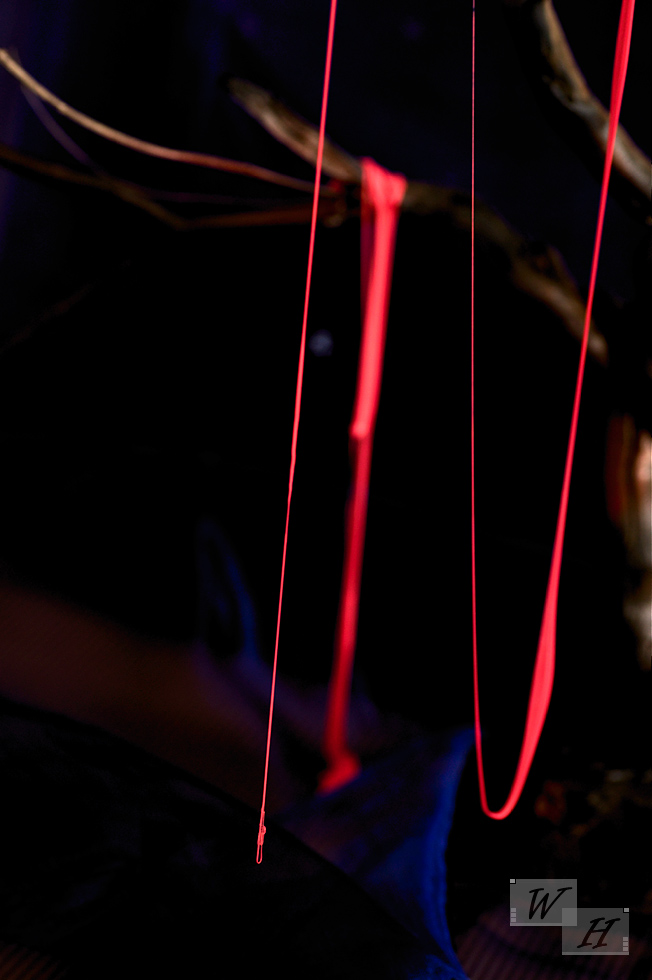 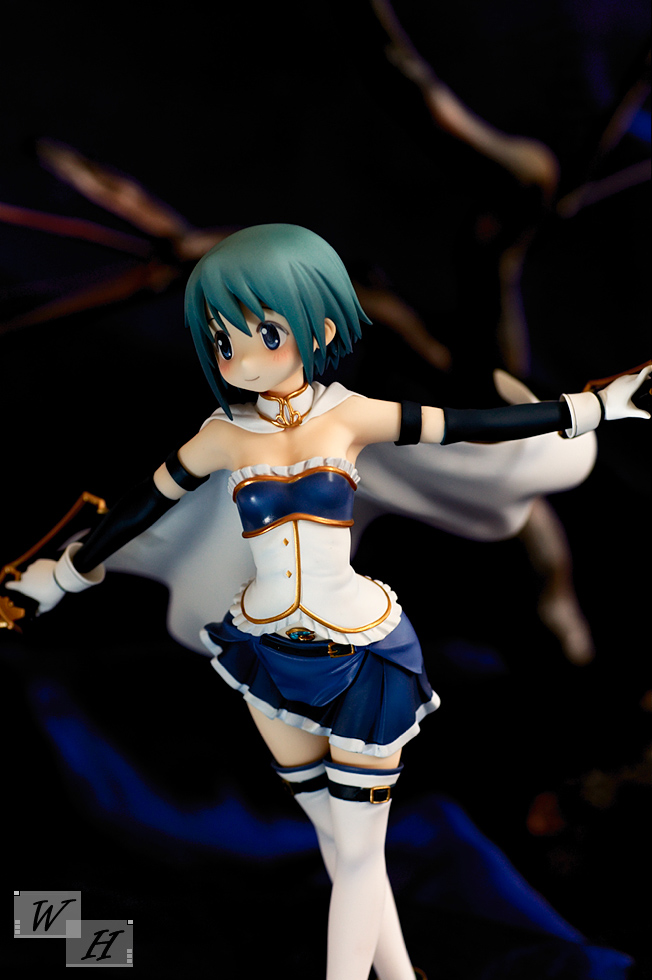 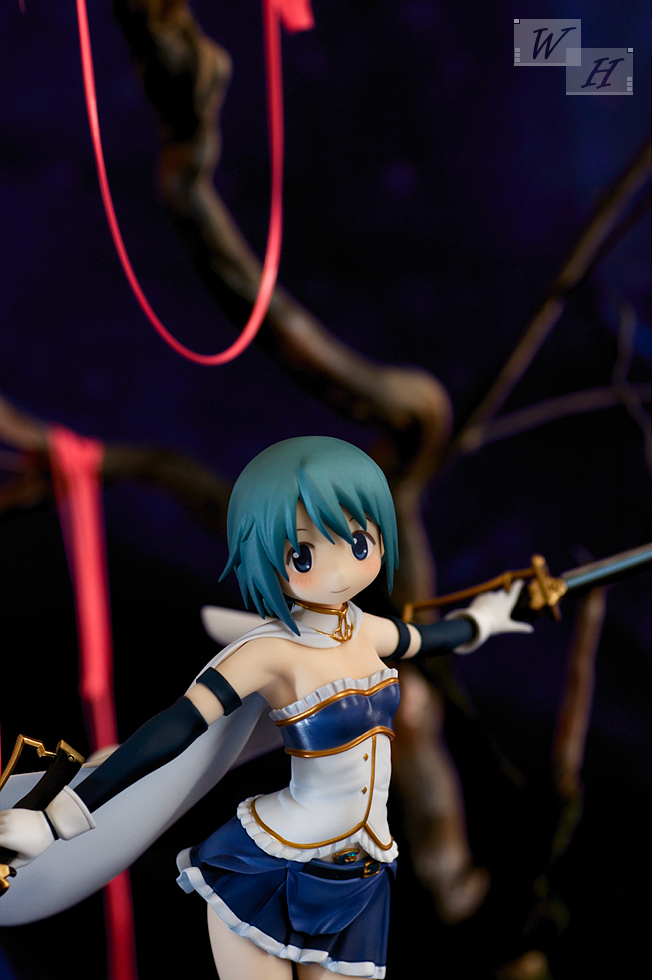 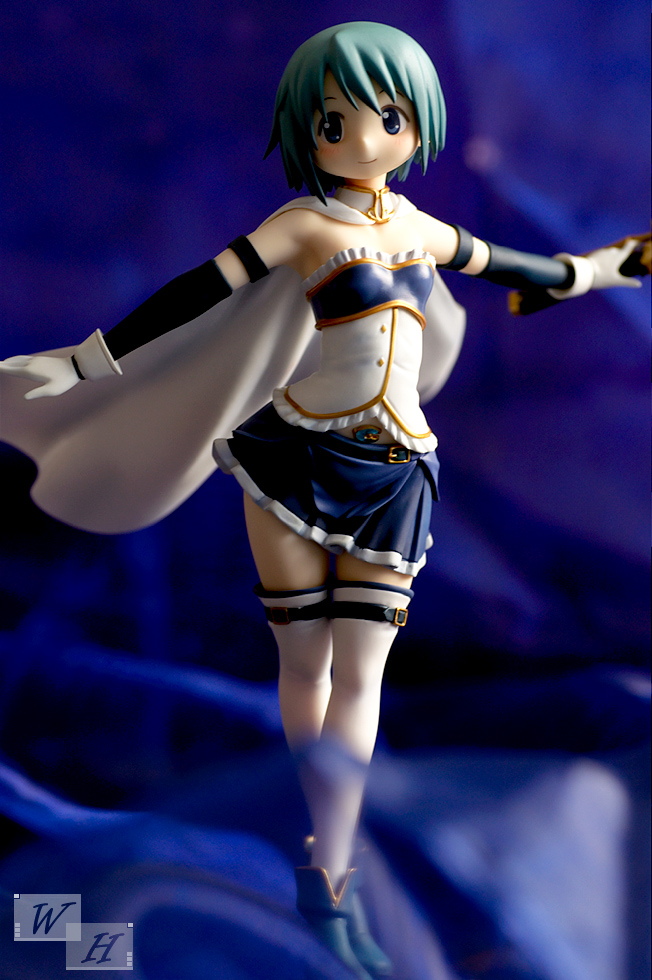 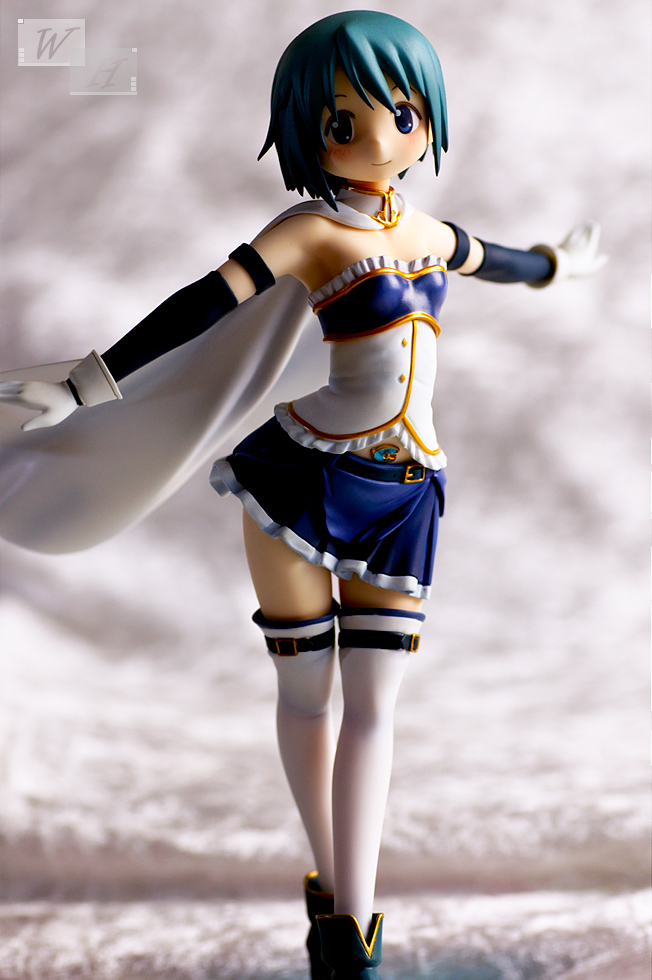 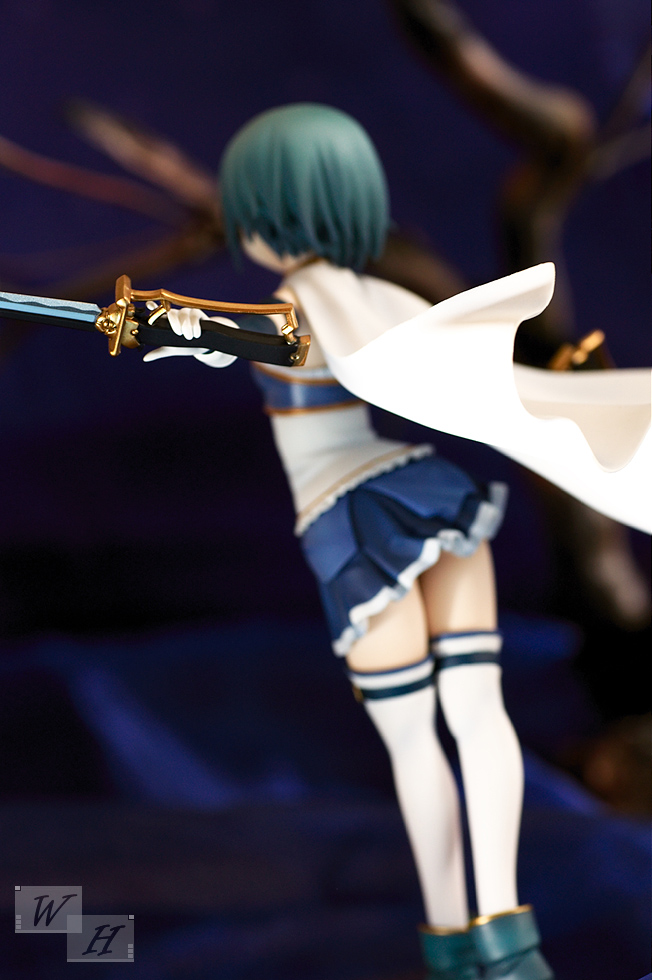 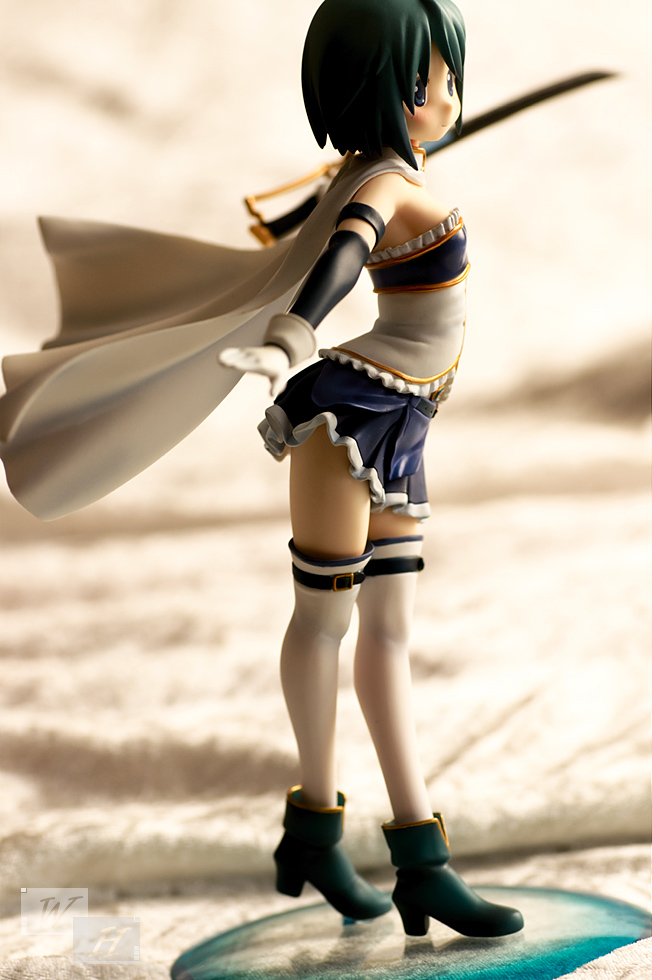 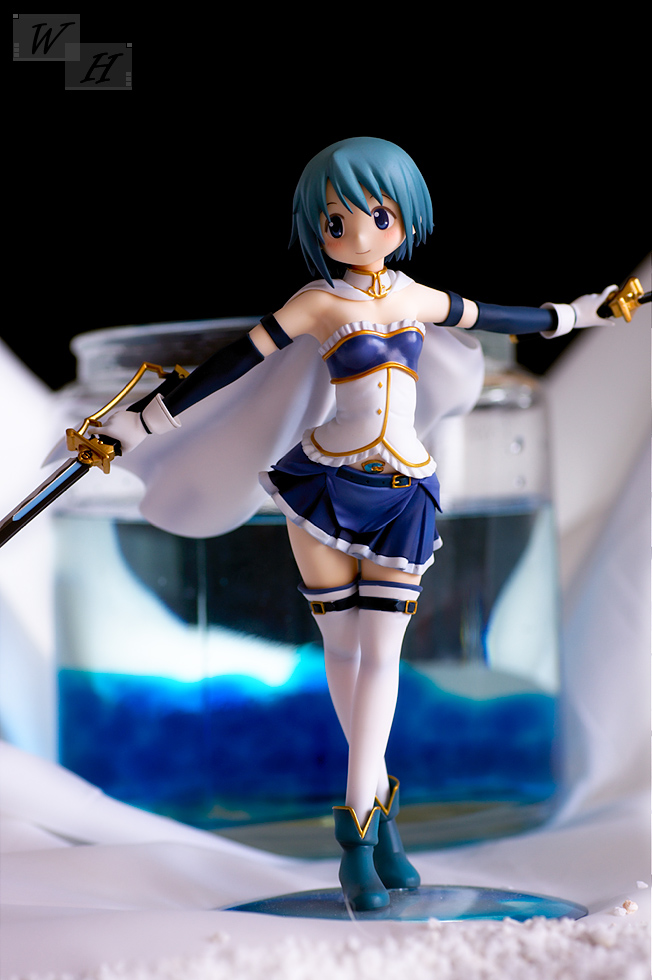 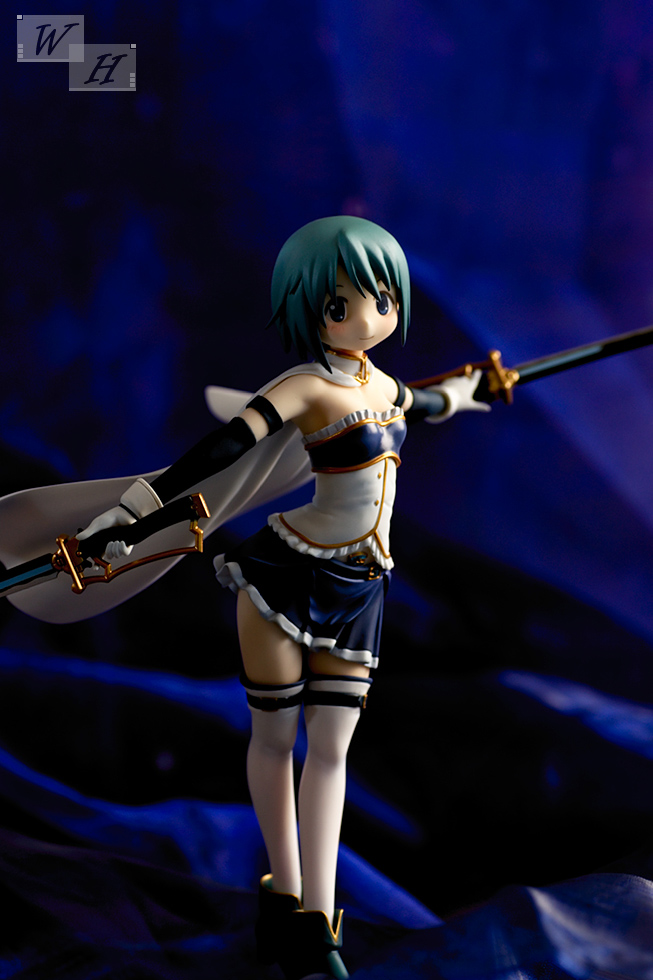 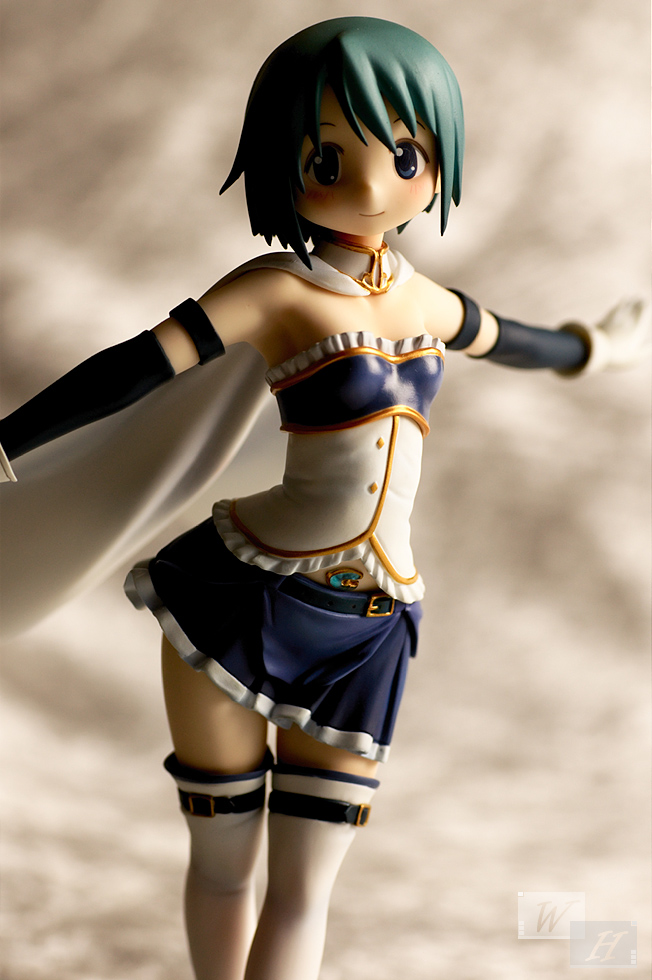 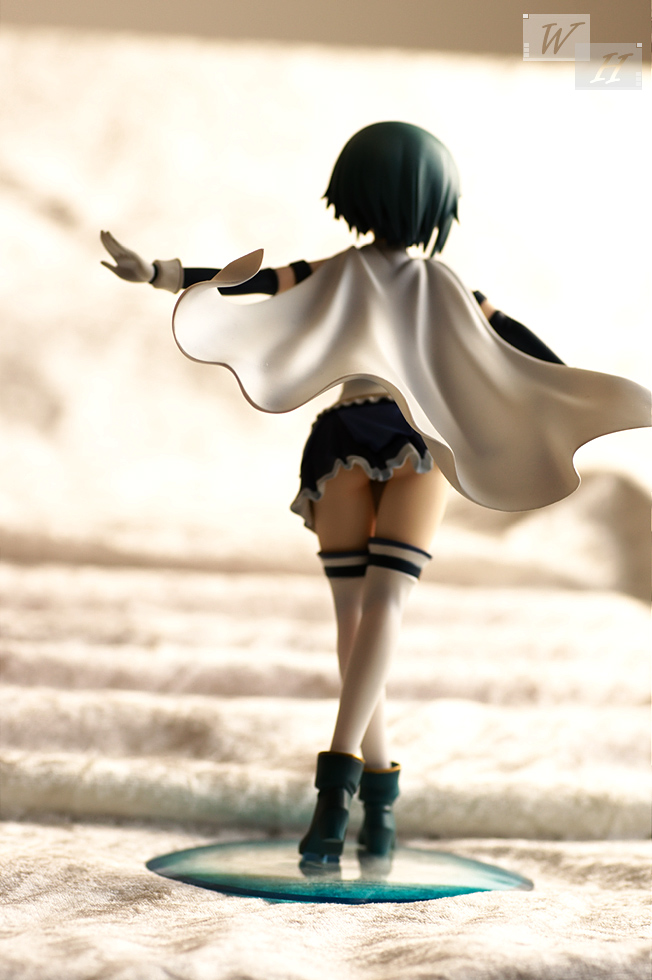