Hello Nyan – san, today I will show you a figure of an under aged girl in a leotard suit *cough*.

The decision of ordering her wasn’t based on my liking for the character. Maria is a ten year old nun and actually one of the lesser important side characters. She is portrayed as a very gullible kid with a liking for snacks. She got in contact with the other characters when she was tricked by Yozora to be the supervising teacher of the Neighbours Club which is the meeting ground for it’s members. Maria is most attached to Kobato’s brother Kodaka in a sibling like way.

I’ve heard about a second season, so maybe Maria will get some development or even a slightly bigger role. Anyway my liking for the character aside I was enchanted by the cute look of this figure and the style of the artist Buriki, who draw the illustration this figure is based on and also the illustrations for the Boku wa Tomodachi ga Sukunai Light Novel. He is a very talented illustrator and I love the way he draws the faces of his characters in a very appealing fashion. 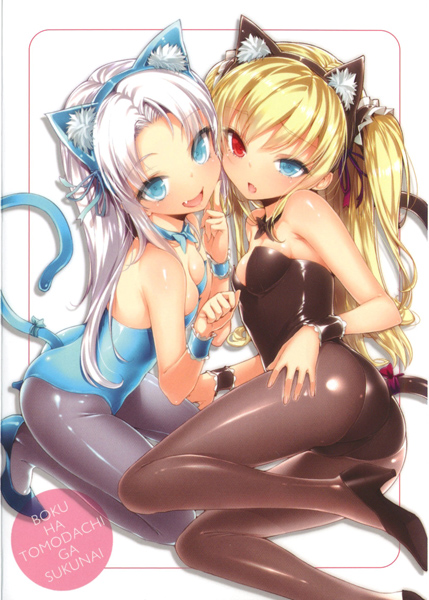 Maria Takayama was manufactured by Max Factory and released in the end of August 2012. The figure is scaled 1/7 scaled and has a kneeling height of 130 mm. actually she seems more like a 1/6 figure, but such loli characters always have bigger heads, so maybe it’s just my imagination.

Maria is actually supposed to be displayed with a figure of Kobato, her rival in getting the attention of Kodaka. I didn’t order this one for certain reasons I will mention later in the review. 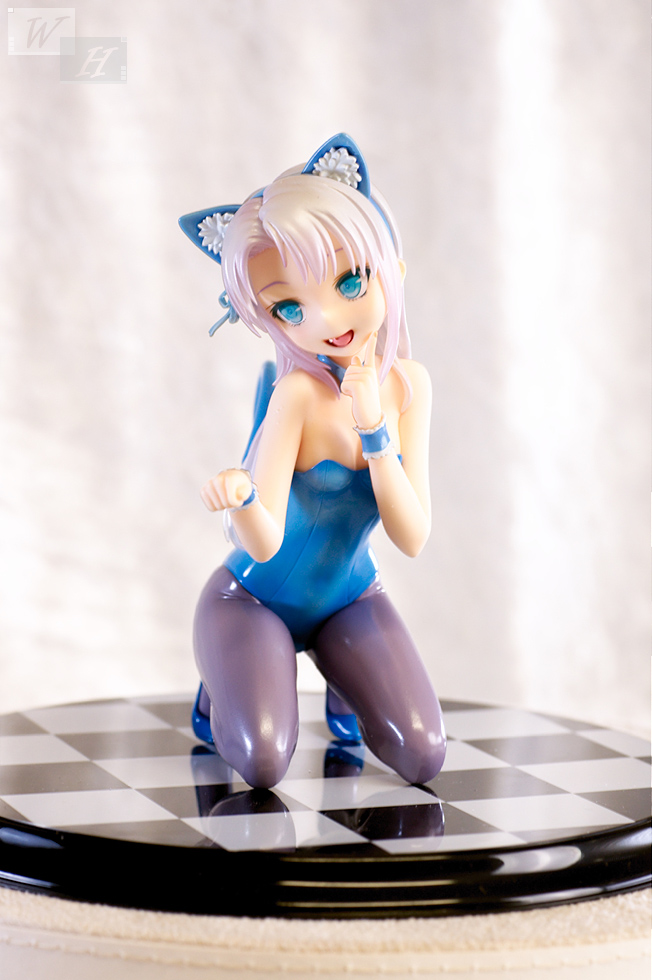 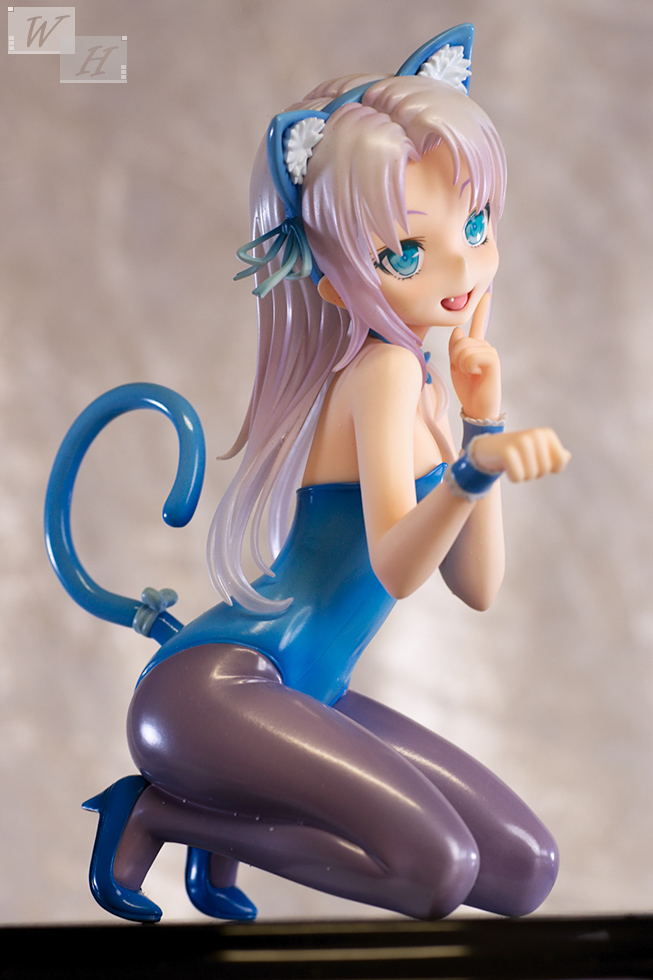 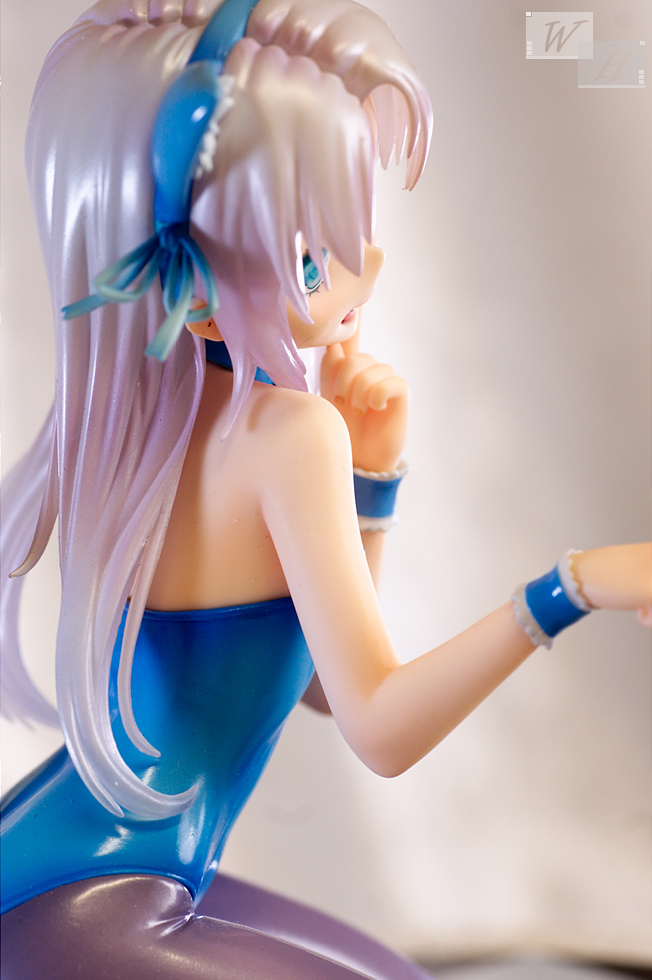 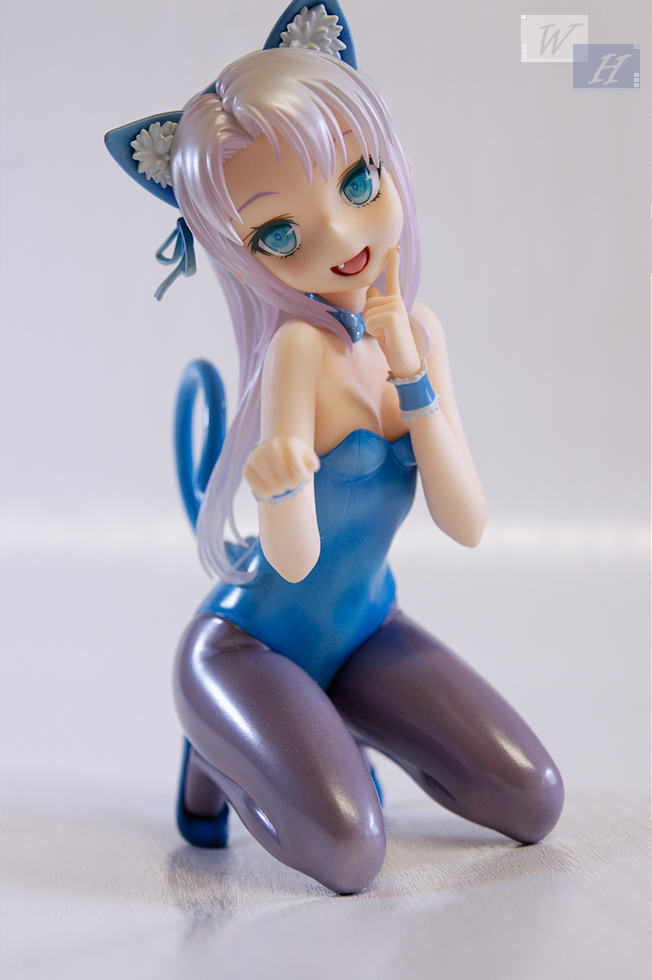 Maria has beautiful light purple hair, it is slightly transparent and has a pearl effect metallic gloss to it, the sculpting of the strands looks beautiful and the details are very well crafted overall.

Maria’s face captures a very cute and playful expression; it’s just adorable and makes me happy to look at her. Considering the level of detail of her face you actually think this is a figure 2.0 which puts the faces of other nice figures to shame. The look from the illustration has been recreated carefully, and the very detailed, shiny eyes give the figure a lifelike appearance.

There is a deeply sculpted mouth with nice dark shading at the insides and a cute little white fang. Other facial details like eyelashes, eyebrows and blush marks were carefully applied, which creates a great level of detail. Compared to other figures from Boku wa Tomodachi ga Sukunai, who rather were created after the anime look, Maria with her close resemblance of the Light Novel illustrations is on a completely different level. It would be cool if Max factory would make more figures from this franchise, a nice Sena and Yozora would be very welcome. 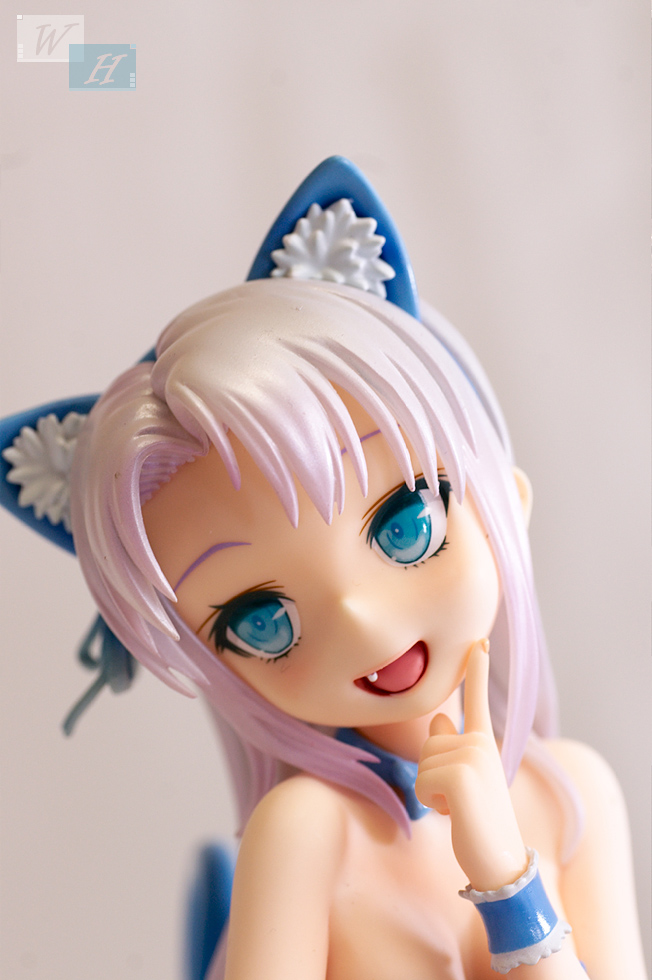 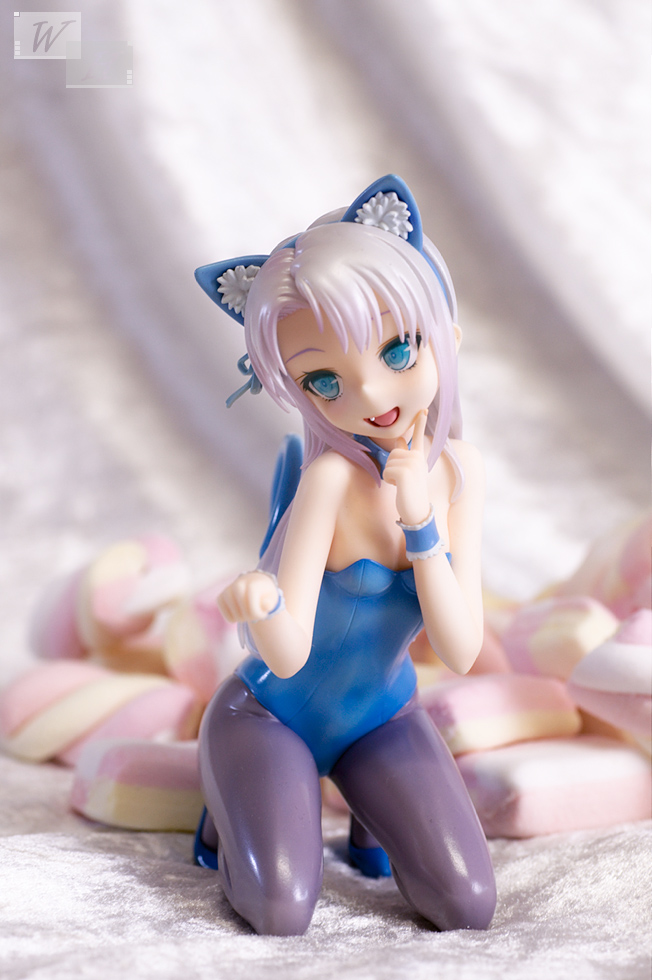 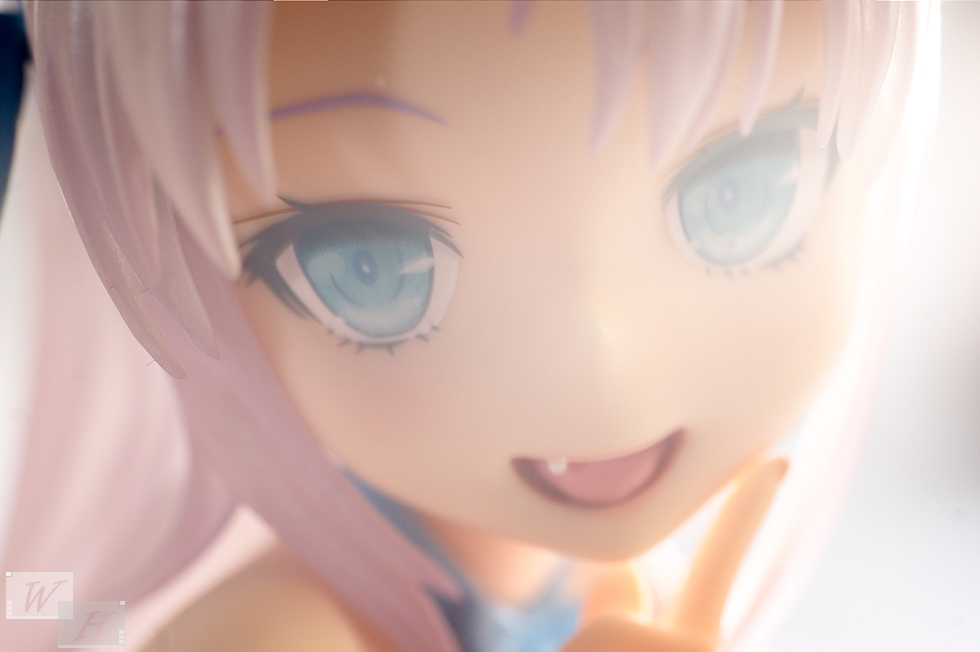 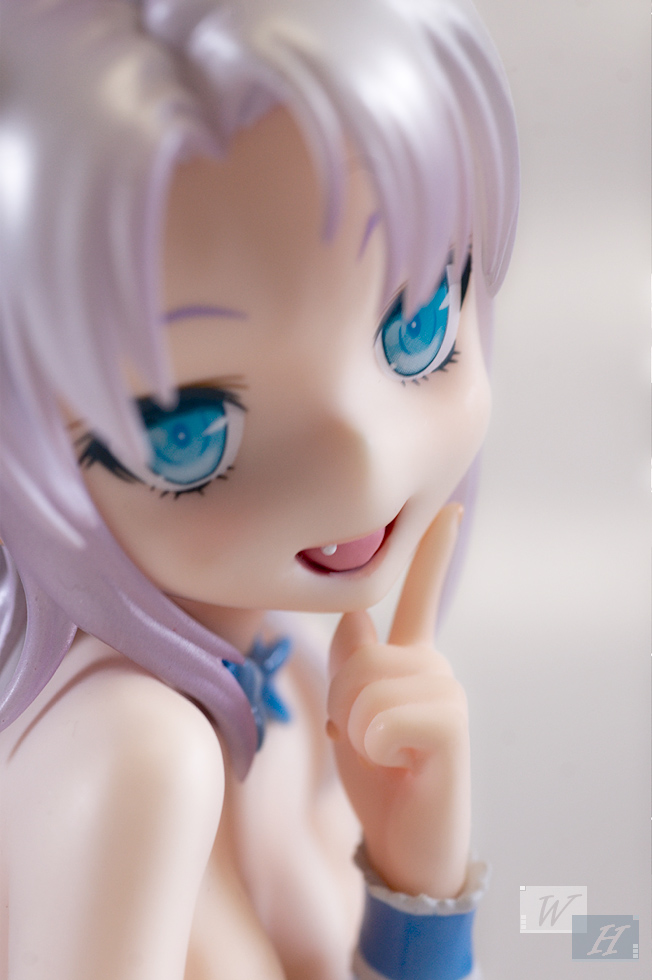 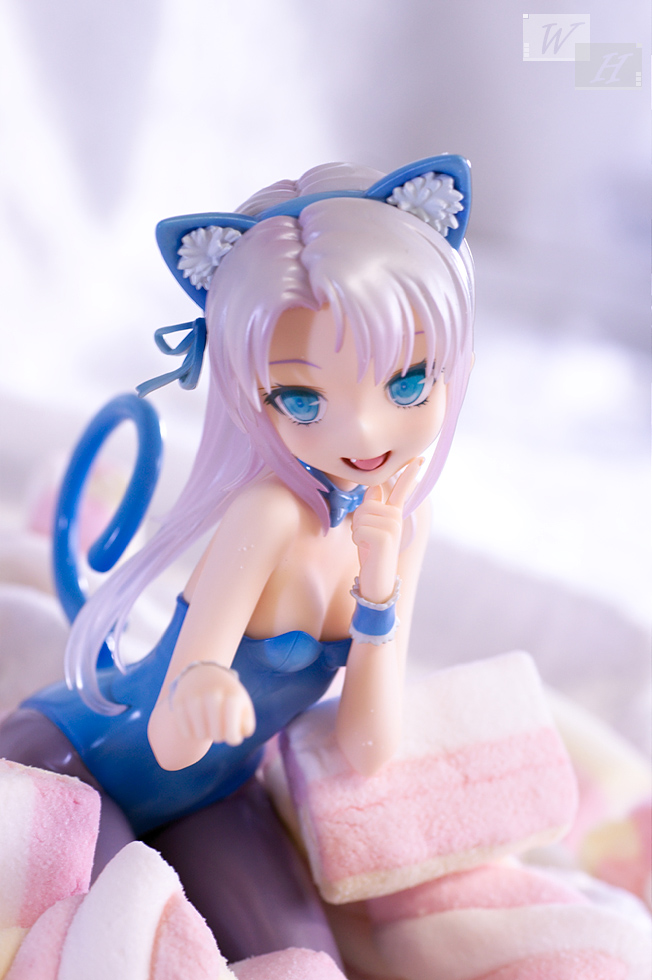 Yeah it can’t be denied that Maria has a loli like body since she’s just 10 years ols. Yet her body is not completely undeveloped though, she has a slightly endowed pelvis and a little bit more around her chest than you would expect. The suit is pretty tight around her buttocks and crotch.

The figure doesn’t have the nun outfit from the anime, it’s the outfit Maria is wearing in a certain illustration. I might sound contradictory but I really don’t think that this outfit is appropriate for a girl of her age. This figure would have looked great in a more casual outfit as well. Anyway Maria is dressed in a tight, bright blue and shiny leotard suit an alternate version of a bunny suit.

She has a cat ear hairband with a cute ribbon on the left, also the furry parts in the ears are nice. At the back she has a tail. Underneath her dress she is wearing a light purple pantyhose, Maria even has high heeled pumps. The paintjob looks quite luxury, the blue suit has nice shading and most of her outfit has a shiny top coat; her blue dress is exceptionally shiny. The figure looks great with all the different textures, the shiny clothes; the pearl effect hair and the matte skin. 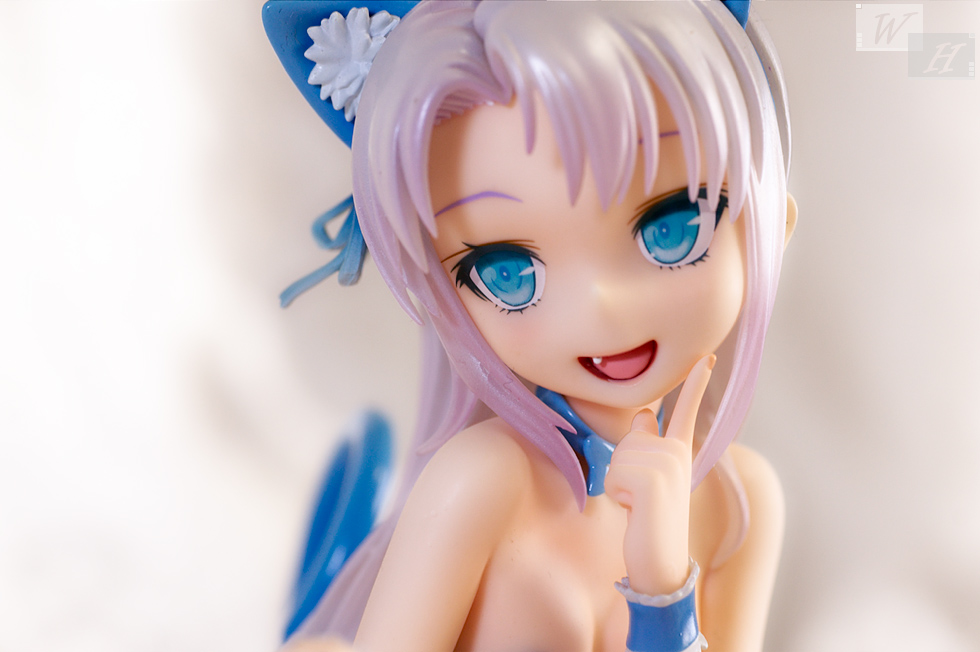 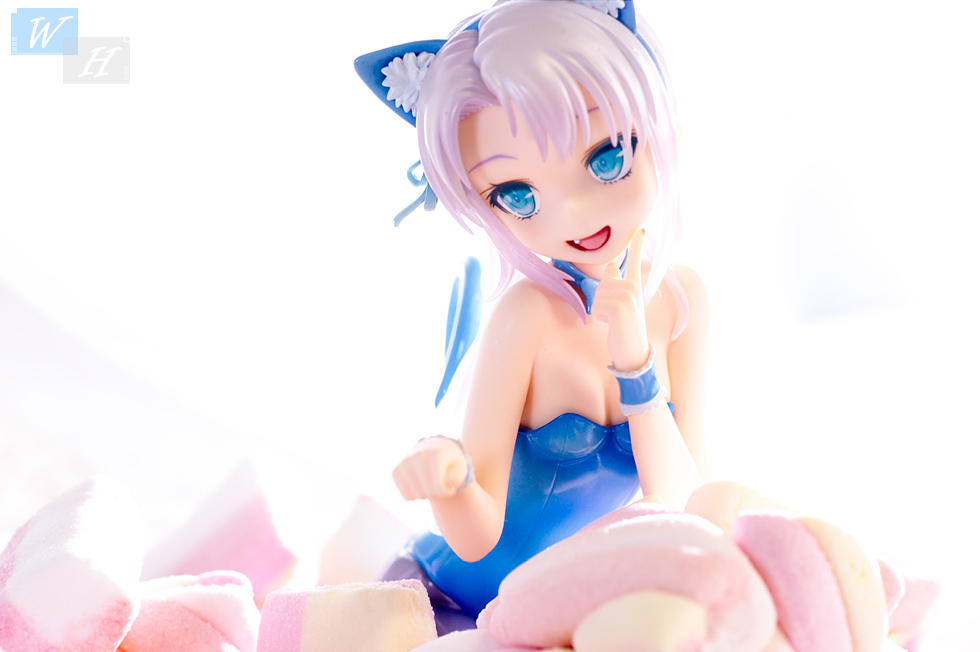 The reason why I didn’t buy Kobato was her face expression; it was kinda too sexy in a wrong for my taste.  Well, she has the same dress as Maria, but I could justify Maria’s purchase because of her innocent and cute overall appearance, had too much doubts about Kobato in the end. Mmmh maybe I should have bought her nevertheless, she’s actually very pretty. 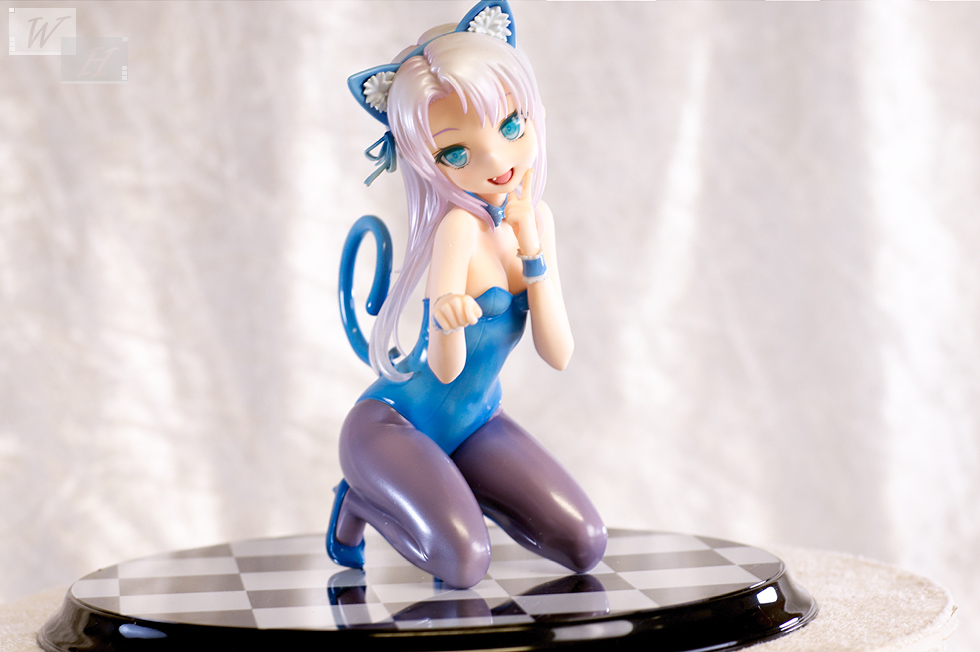 Maria has still a nice size even in this compact pose, which is supported by her knees and tips of her feet, she actually has a very well balanced stand and won’t fell over that easily. Her head is slightly tilted which gives the figure an even cuter and lively appearance. One hand is playfully turned into a cat paw pose, while the index finger of her other hand touches her cheek.

The base is a very shiny chess patterned disk, the squares have been painted accurately and the figure looks nice on it. But you could also place her somewhere else. 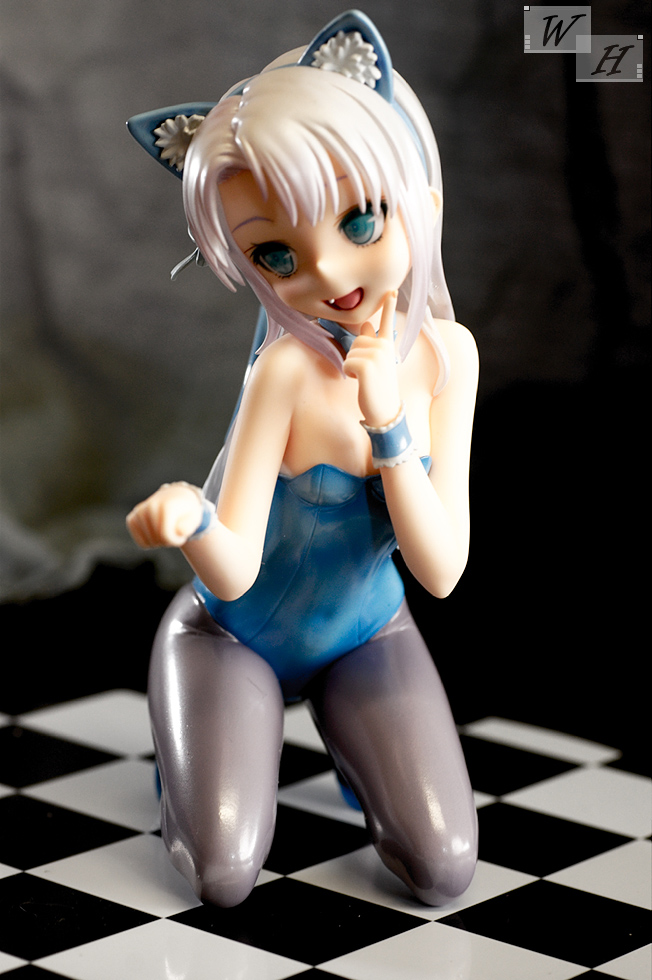 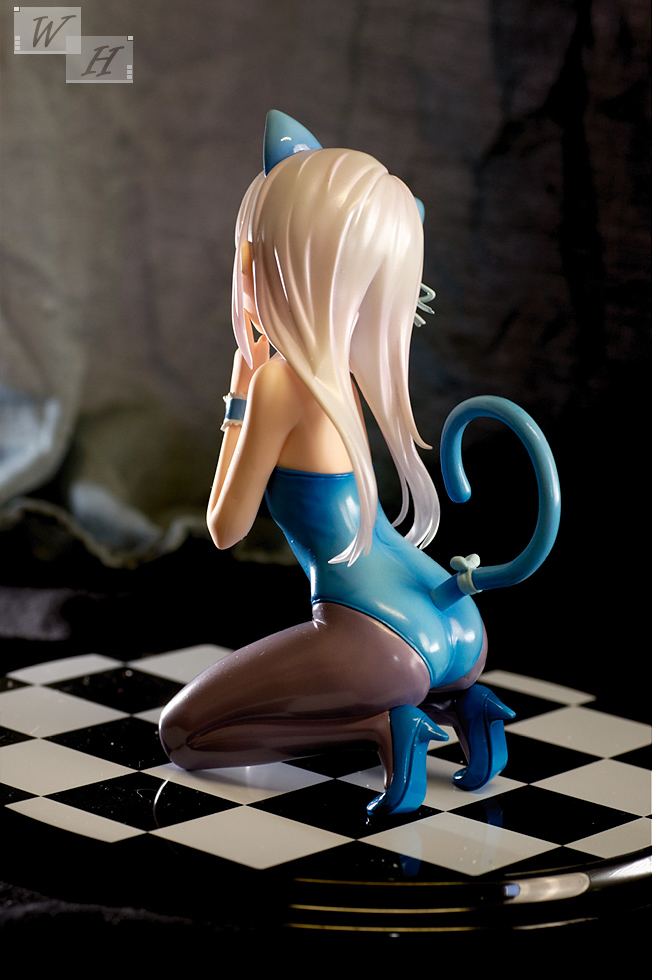 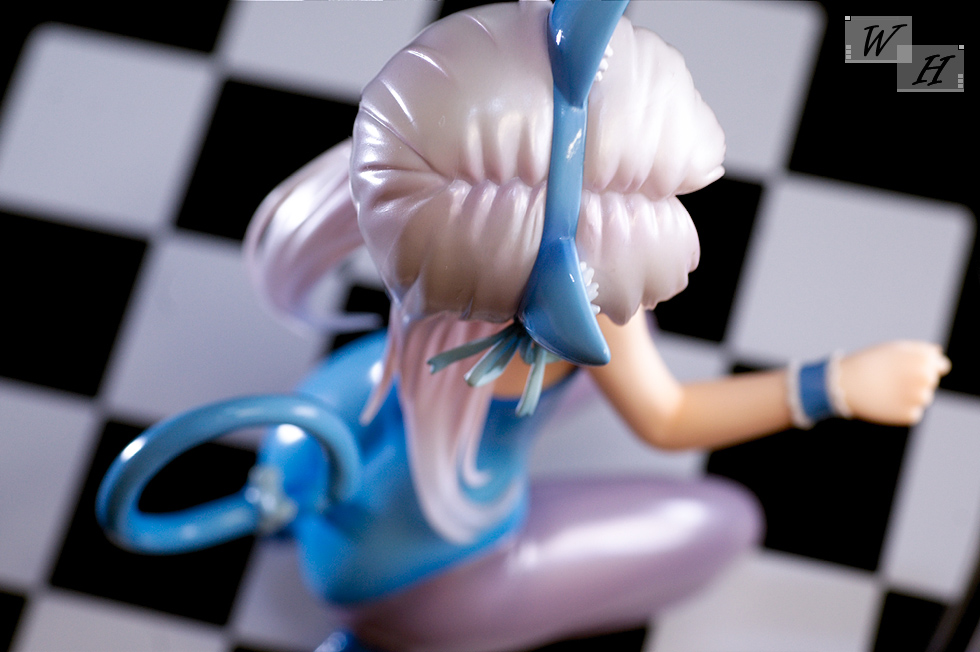 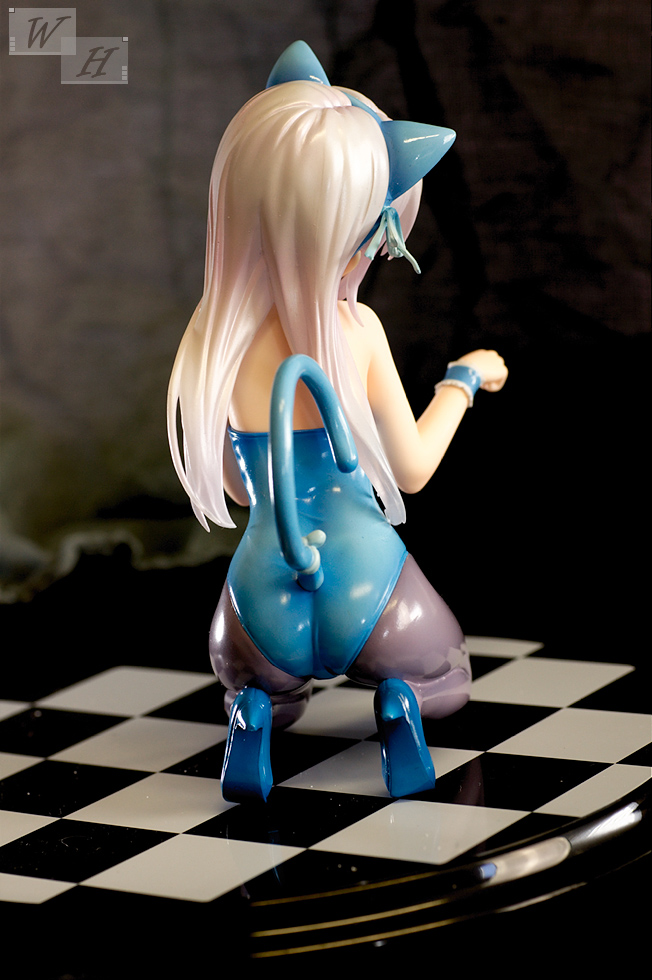 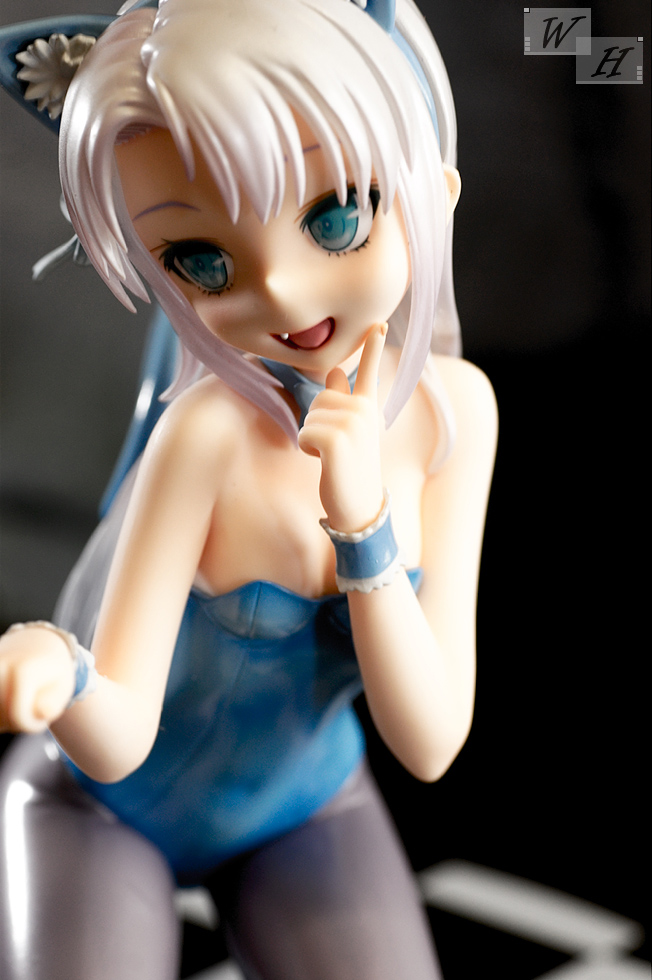 Yeah what should I say, this Maria Takayama from Max Factory is an exelant figure, she offers luxurious sculpting and painting quality. Maria is really enchanting, her cuteness and the great recreation of Buriki’s artstyle, are the big points that make this figure something special. Quality wise she is one of the best made figures that I received in this year and also one of the cutest.

The outfit might be bit questionable, but I only see Maria with my moe goggles, she looks totally adorable no matter what. If you don’t completely despise figures that are based on loli characters I would wholeheartly recommend this figure, she’s fantastic and without any flaws.

I was one of the few who only bought Maria and not the Kobato figure to complete the set of these cuties. Maybe I should have gotten her maybe not. I’ll decide about that a later time.

Another review of Maria is here

A review of Kobato is here

A review of both is here 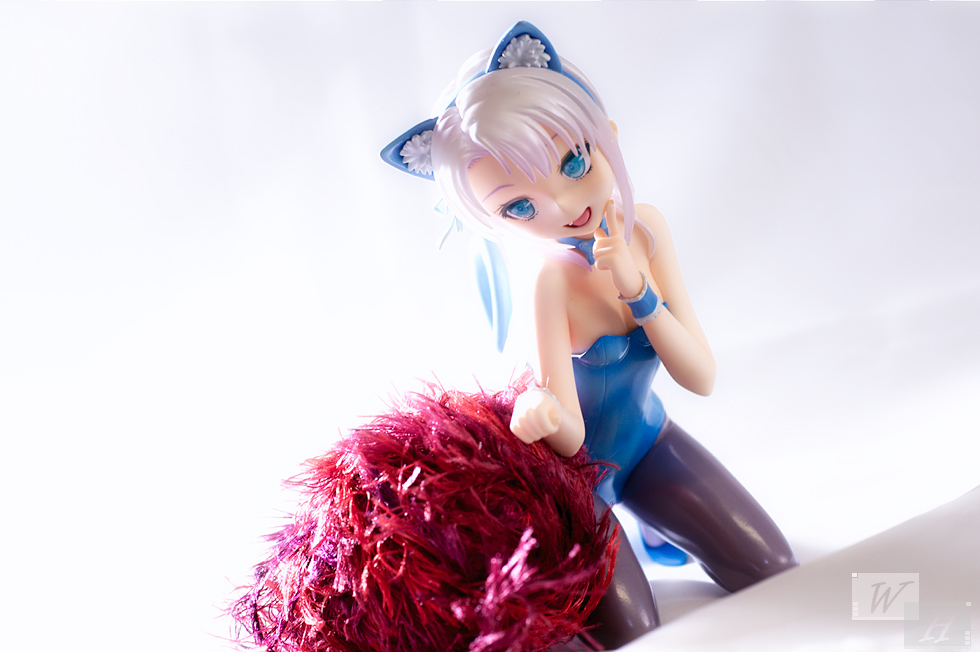 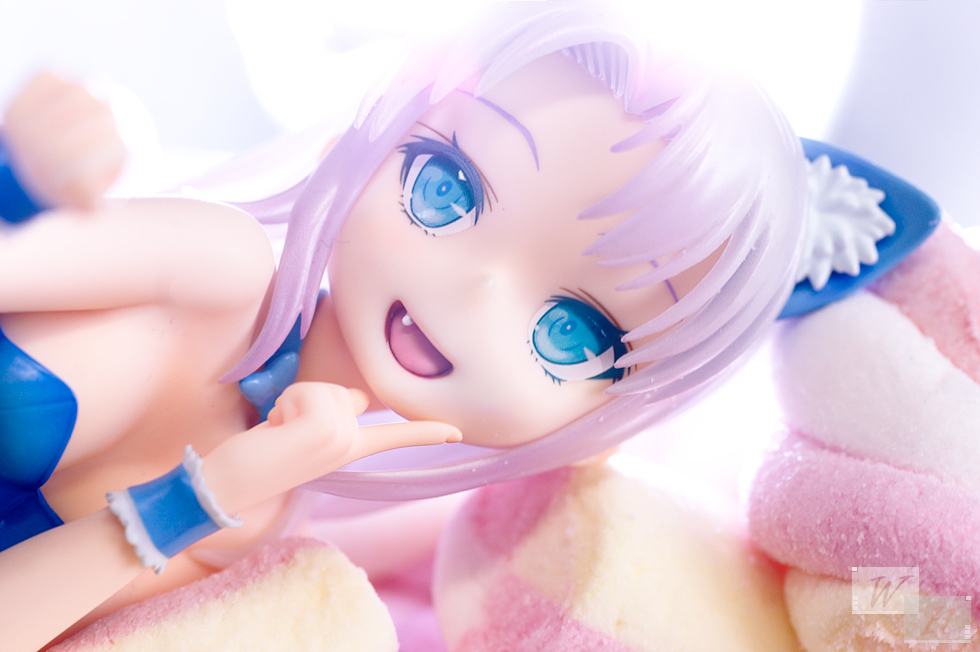 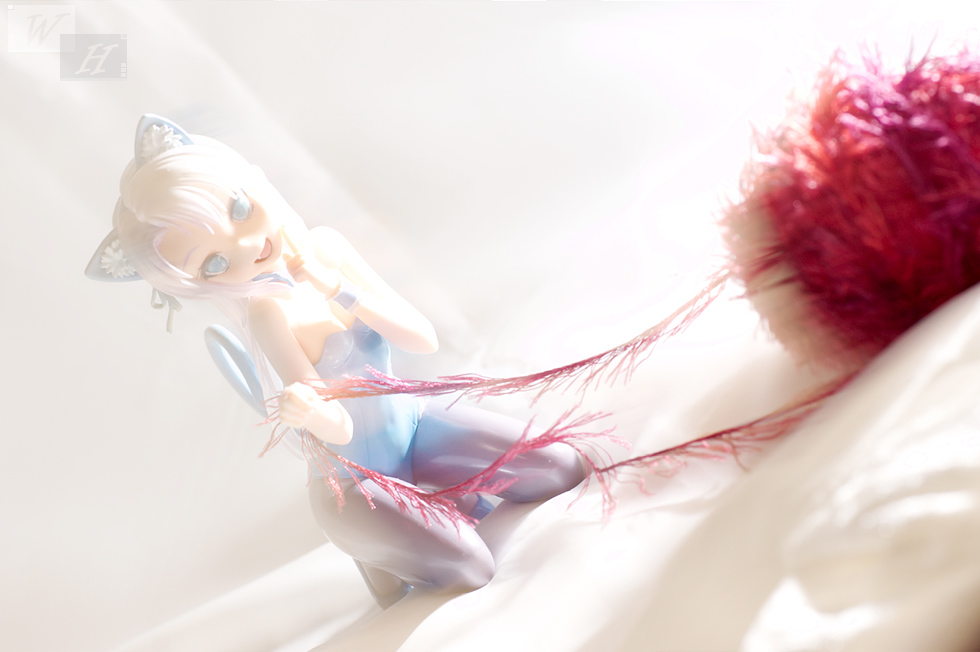 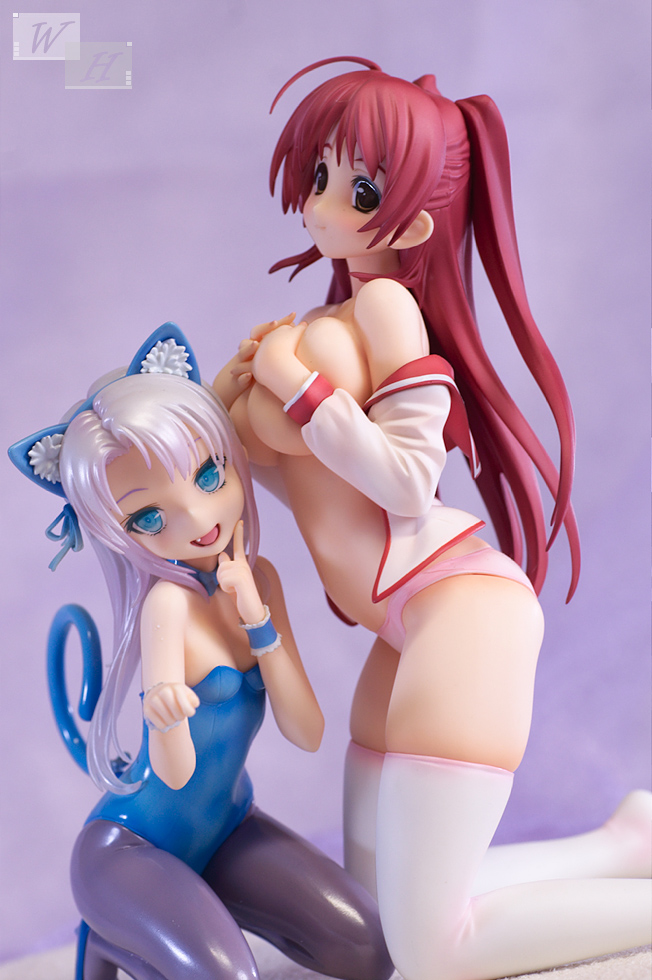 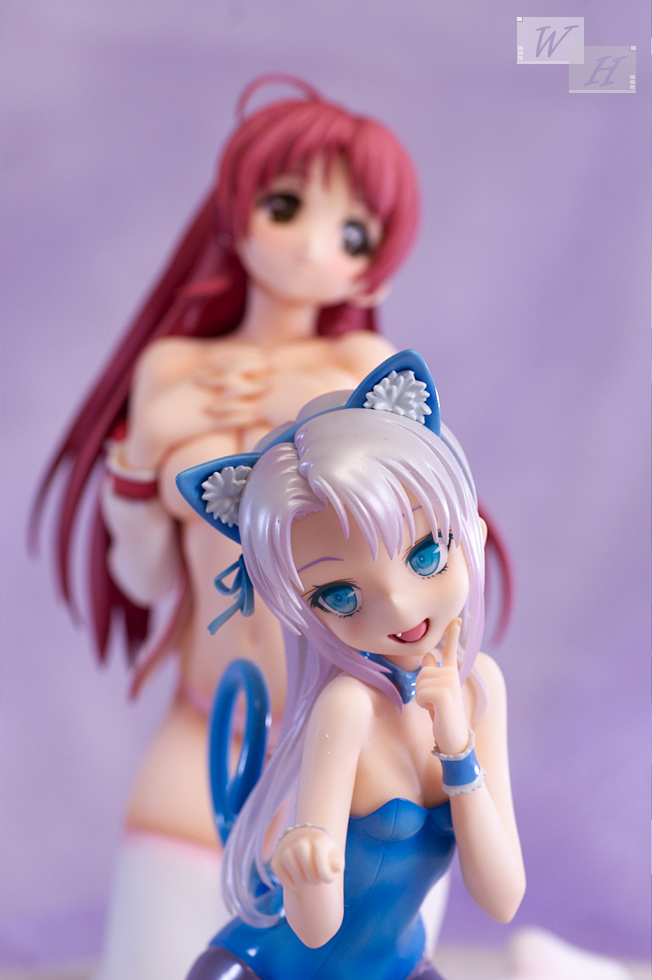 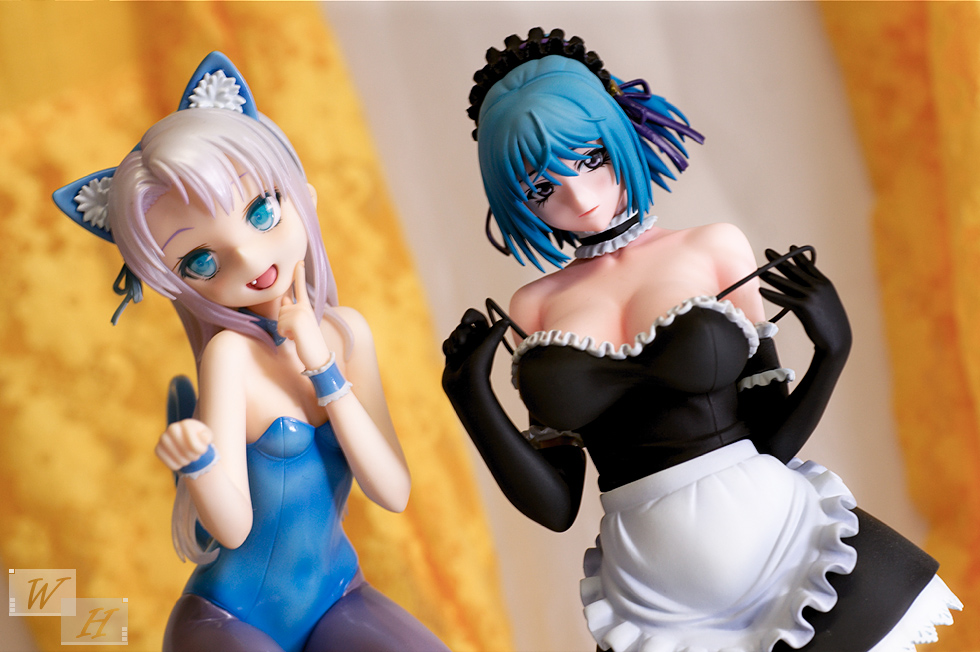 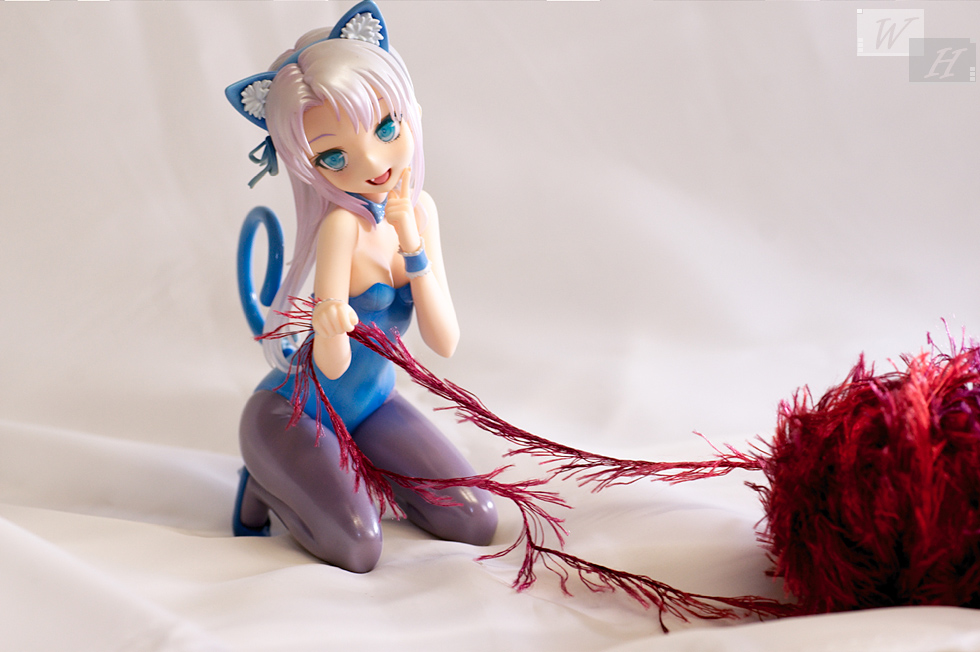