Hi there my figure friends, today I will talk about my recently received figure of Noel Vermillion.

This figure was sold as exclusive item, it was a collaboration between Hobby Japan Magazine and AMAKUNI. Noel Vermillions origin are the Beat Em Up BlazBlue and Queen’s Gate Spiral Chaos.

Noel Vermillion is scaled 1/8 figure and has a overall height of 190 mm, Noel was released in April 2012. On first sight I was interested in this figure, even without knowing her origin or character. What counts for me is the overall look not the knowledge of the character in the first place.
As I was finally convinced to buy her, the preorder period was already over, but thanks to Figuya.de I was able to get her a few weeks after the order deadline.

On a funny note I know nothing about her origin Blaz Blue, a game I’ve never played, Im such a lame Gamer. The story behind it is quite complex and I would just embarrass myself while trying to explain more about it. So for now just a little bit of backstory about the character herself.

Noel is an artificially created human, who was born on December 25, 2194. Later she was adopted by the Vermillion Family. She was accepted at the Military Academy and before her graduation she had the rank of an lieutenant in the 4th division of the Praetorian Guard. Noel is the shy and clumsy kind of girl, who likes everything cute, writing poems and online shopping. 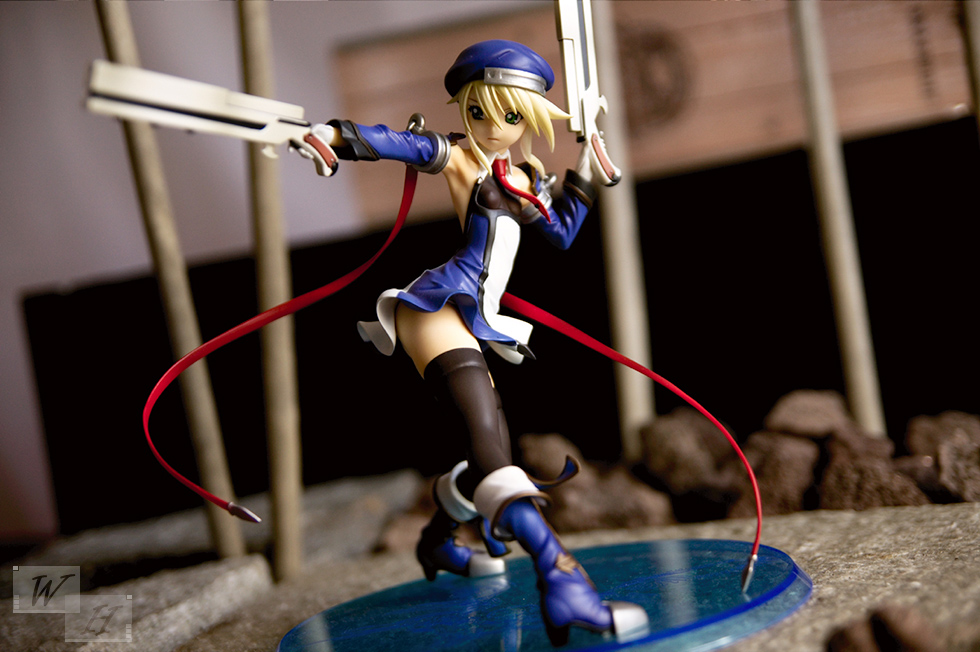 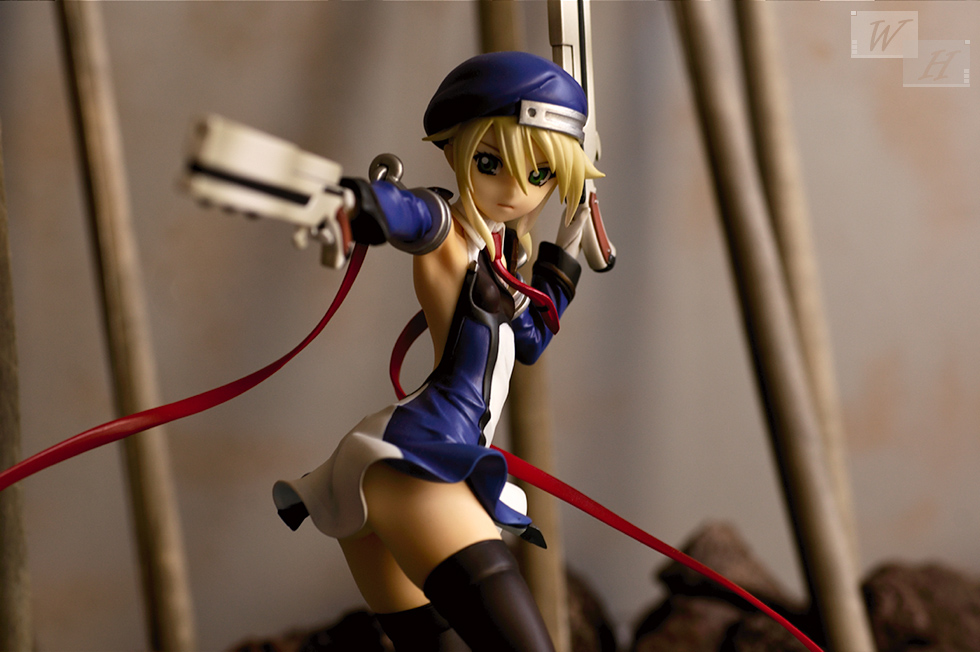 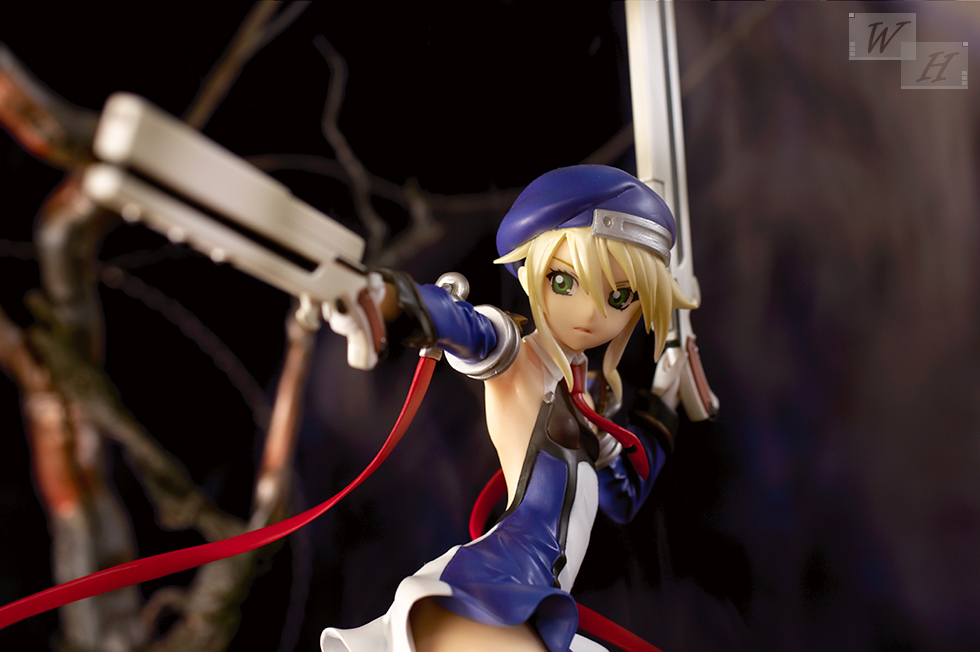 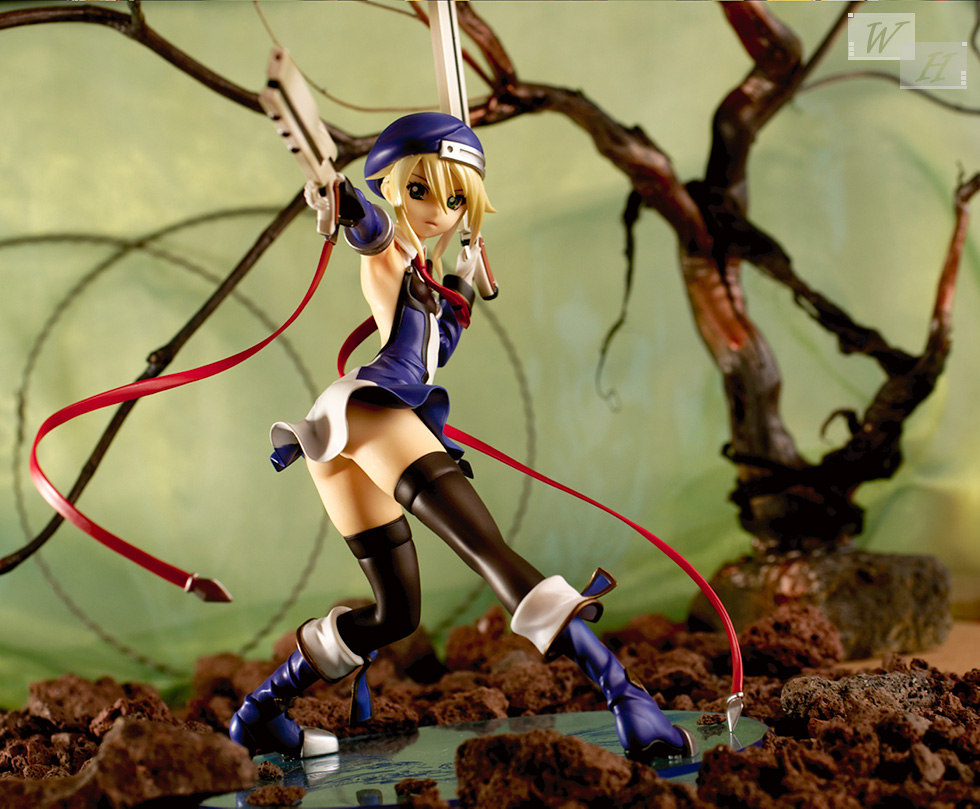 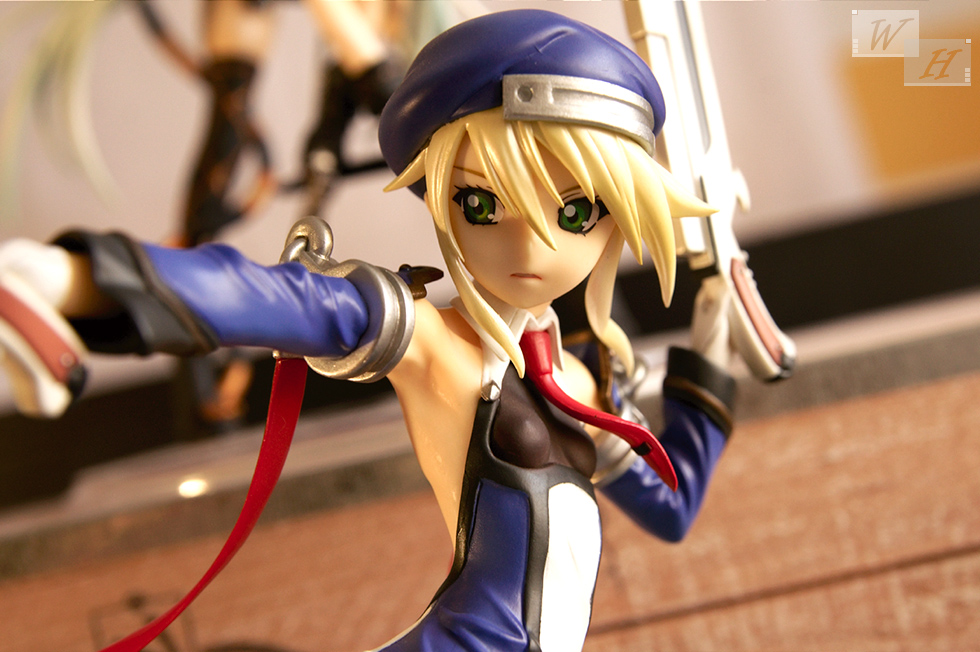 This figure of Noel is nicely crafted adaption, I will talk about her head first.The hair of Noel has a pale yellow color with a somewhat metallic gloss. The single strand appear quite detailed. Short hair can be very nice, but don’t be fooled, Noel actually has long hair, but hidden by her blue cap.

A very nice part of this figure is her face, I like the beautiful and big green eyes which are pointed to the right. She also has a pretty and soft looking face, especially the area of her mouth looks very appealing and the slightly opened mouth gives the figure a very convincing expression.
In general I actually would complain about a lack of blushmarks, but not in case of this figure. 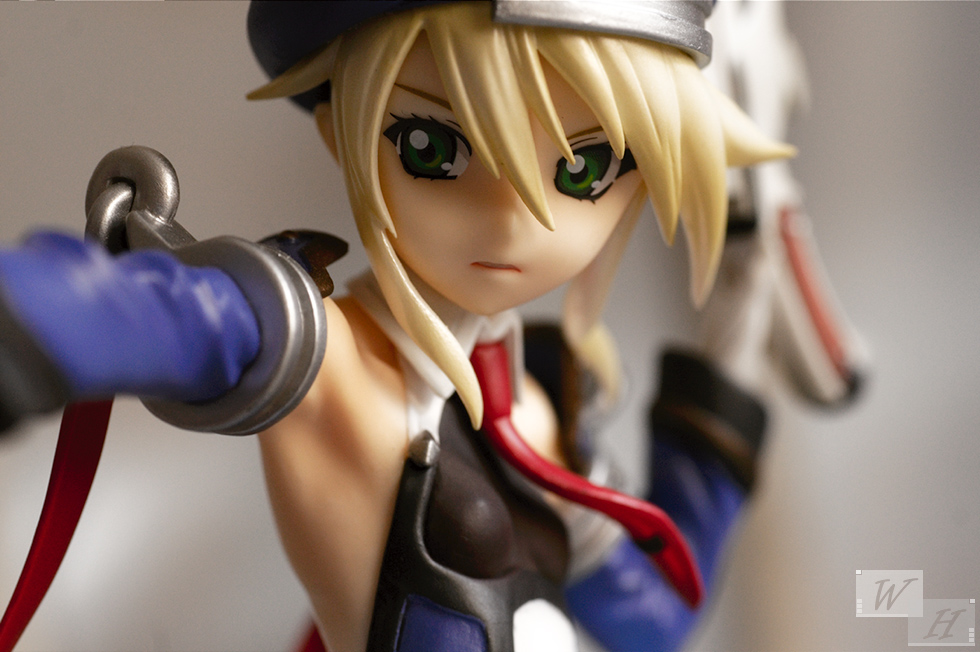 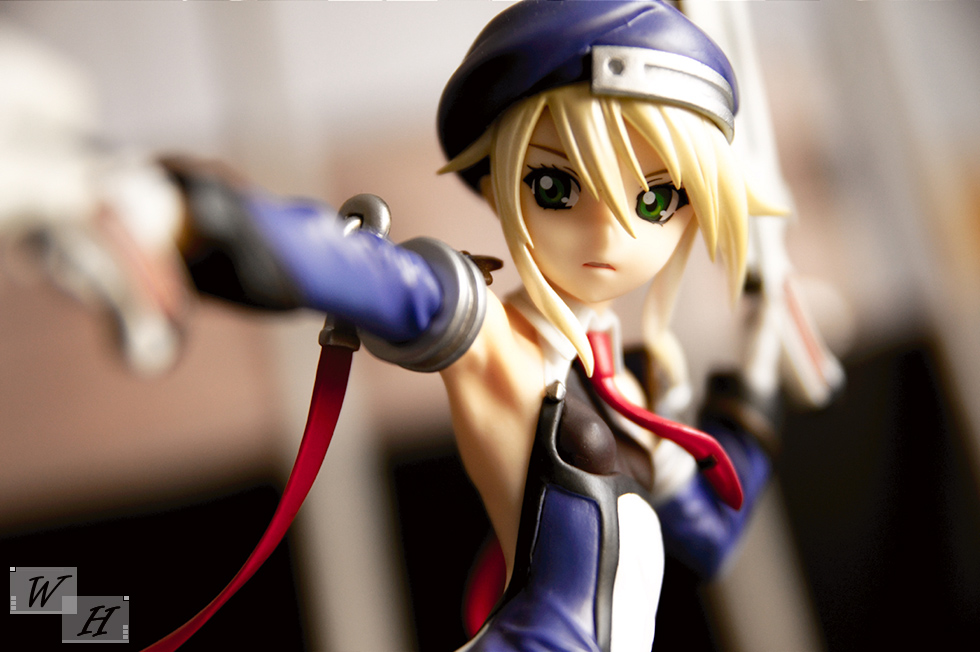 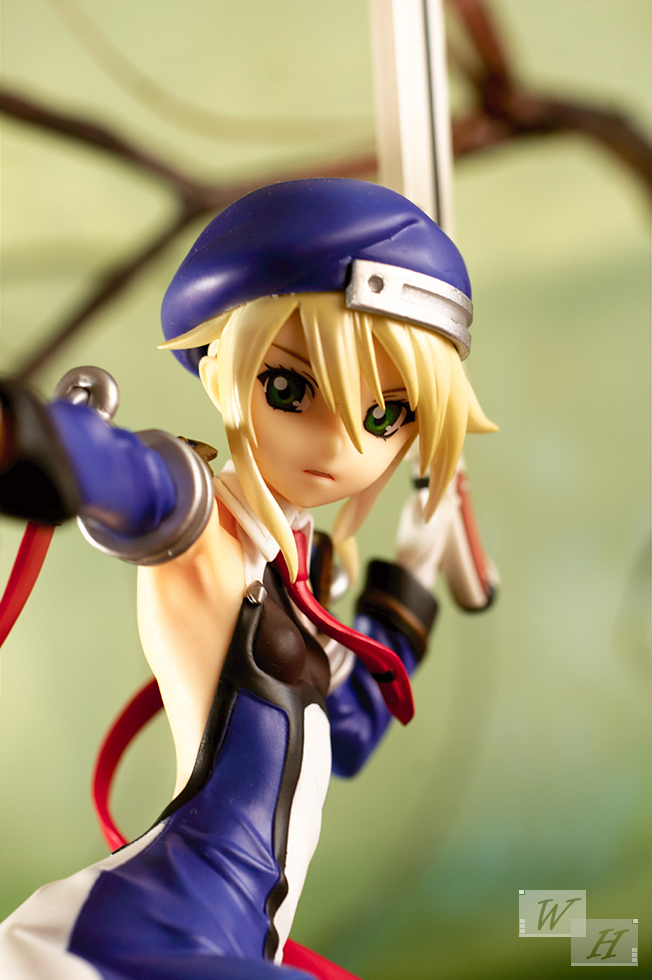 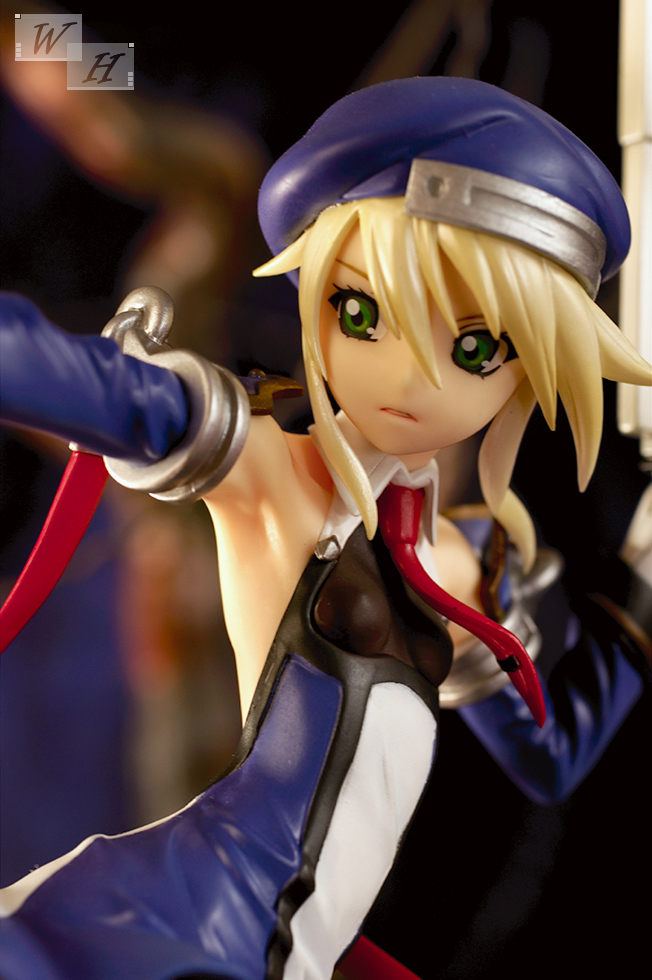 Noel has an attractive and petite body, with slender arms and legs. The legs are very sexy and the slightly meaty thighs add some feminine charm. As you might have noticed Noel has small but perky boobs which look very well in combination with her petite body, her back also looks very nice thanks to the nicely sculpted scapulas. A lot of attention to detail was also put to her armpits, they look quite soft and nice, even though that is not really one of my fetishes ;D

This figure is presented in Noel’s battle outfit, a jolting sapphire NOL uniform, that actually looks more like a short summer dress. but with the white collar and a short red tie, a uniform look was created. The color scheme is a combination of black, white and deep blue with silver and red details. She has seperated sleeves with big silver rings at her forearms. At her legs she is wearing matte black stockings, further below she has nice and elaborately sculpted boots.

As a character based on a fighting game Noel naturally carries weapons, she has two long pistols with a long barrel called Arcus Diabolus: Bolverk. They can be used for shooting and hitting. 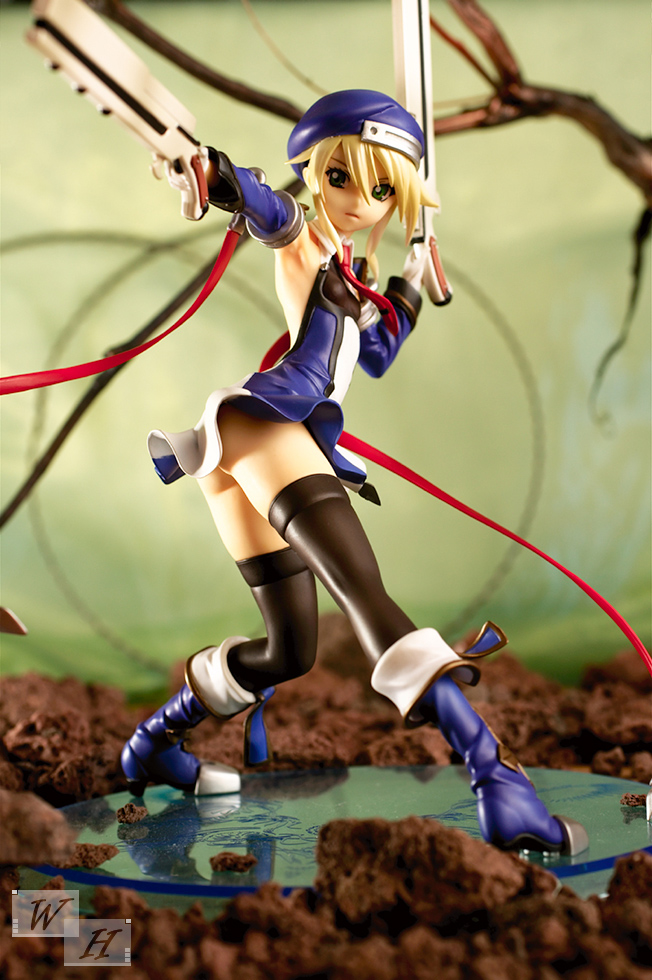 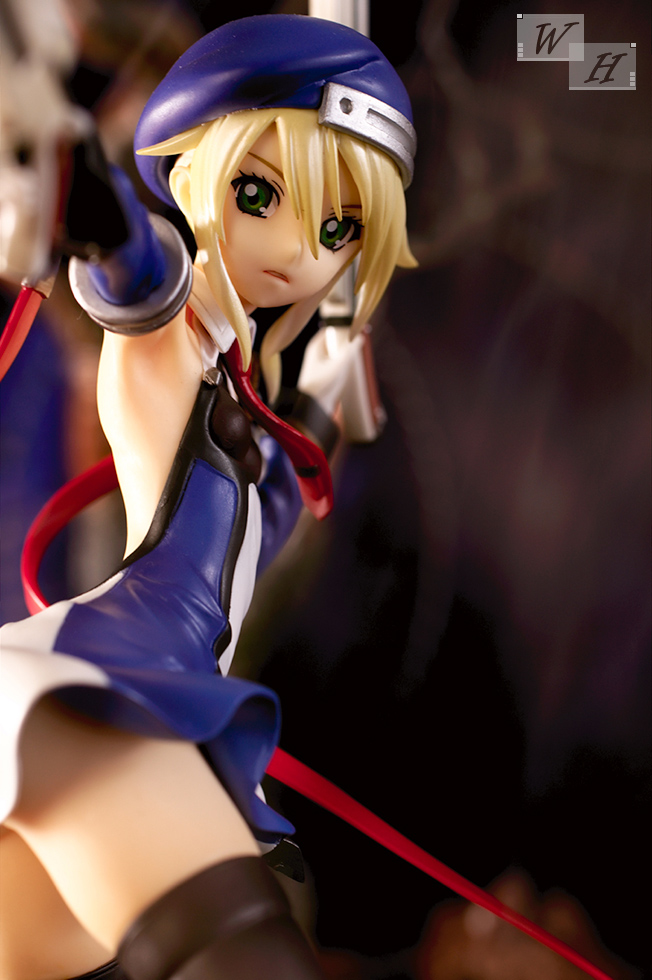 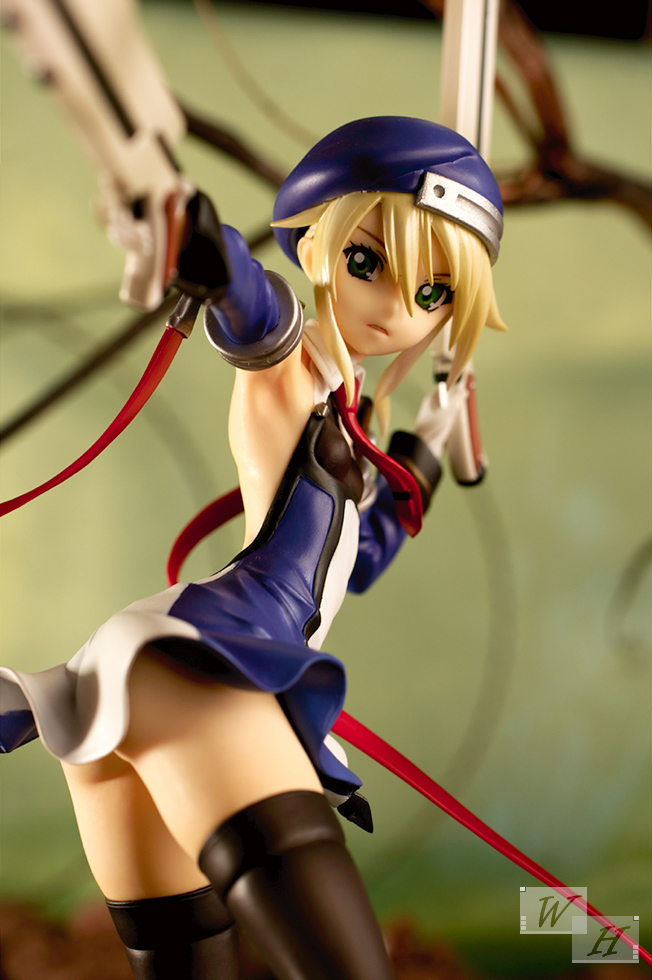 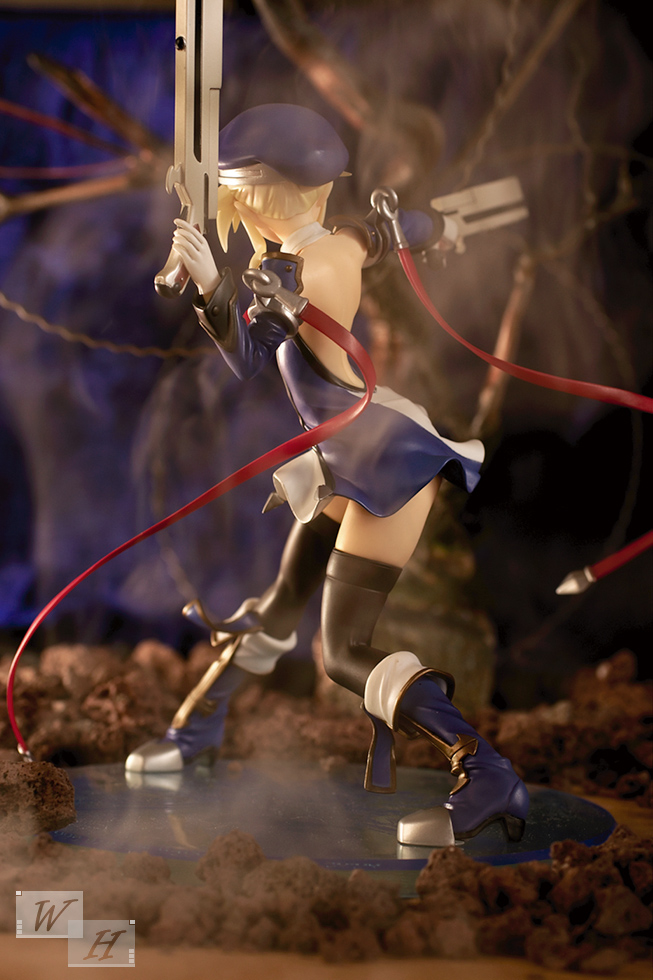 The figure doesn’t need many assembly steps, there is the figure, the base and two long red straps. These straps are somewhat flexible, but you shouldn’t try to bend them too much while pushing them into the slits at the rings of her sleeves. They give the outfit an extra cool look.

The outfit captivates with it’s details sculpting, there are detailed folds and wrinkles where they belong. Next to her lovely armpits, Noel also offers a bit of mainstream fanservice in shape of a very short and flowing dress that barely covers her butt. I like how her butt flashes from some angles. Before the release there was a little discussion if the figure would have no underwear. Because in the Game her undergarmentswhere never shown directly in Calamity Trigger. 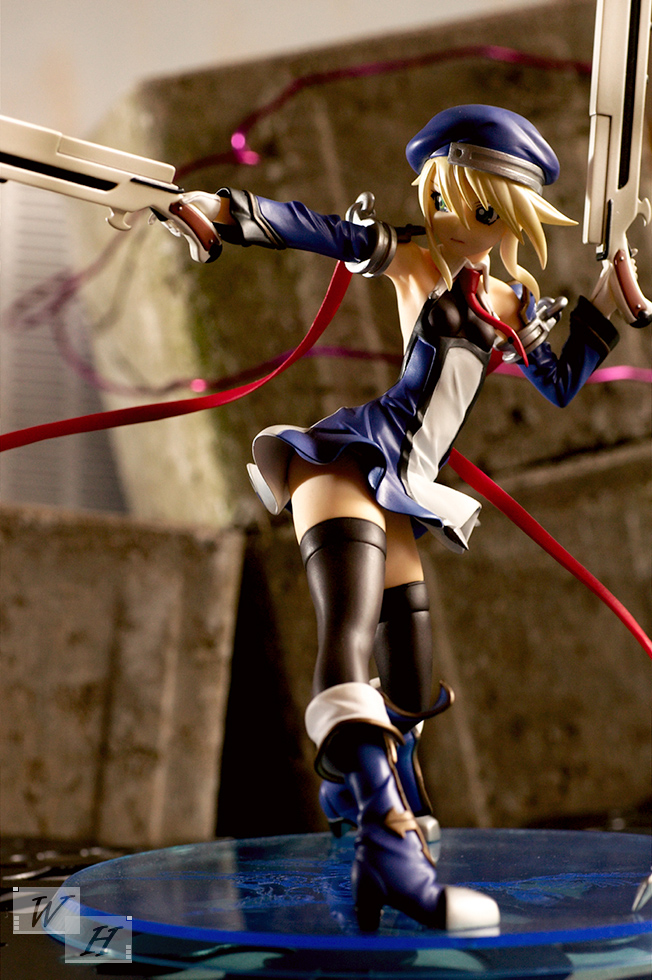 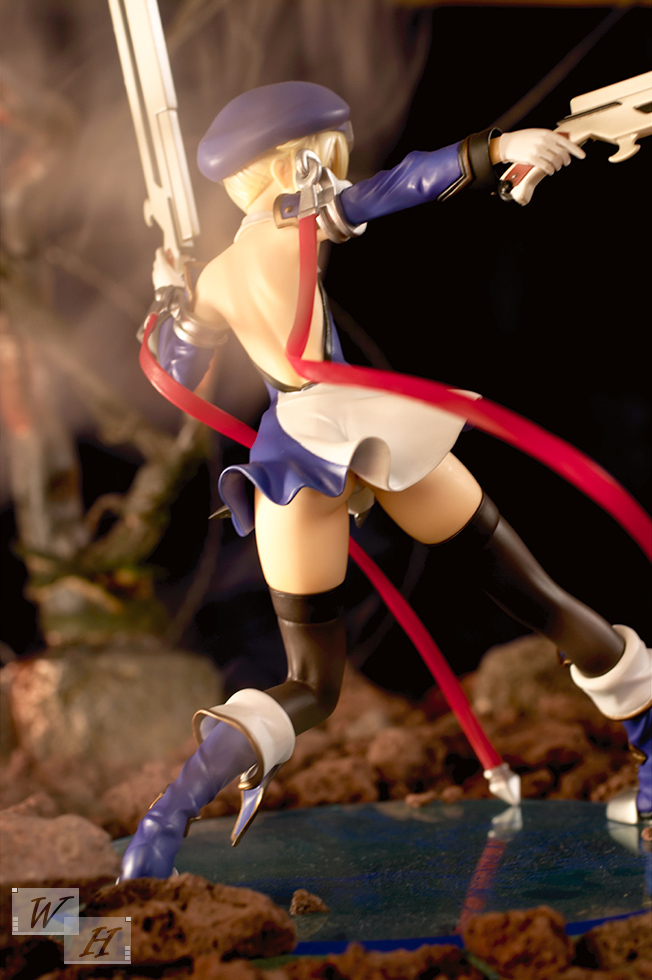 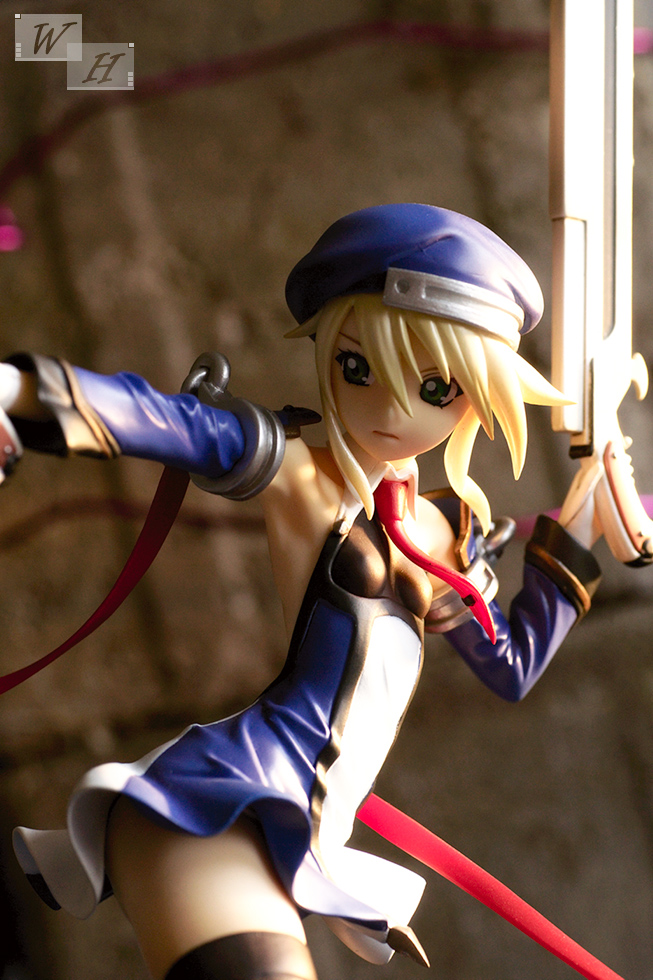 It’s time for a conclusion Noel Vermillion is a nicely sculpted figure with an appealing face and interesting outfit. She has an attractive petite body and shows a good amount of skin without revealing too much.  Im quite happy about her purchase and despite the high price I’ve paid, it’s actually the first exclusive figure (Native’s Bath Time Sonico aside) where I don’t feel a bit like being robbed by the company. This figure is very nice in terms of appearance and quality.

another review was written by Tier from Tentaclearmada 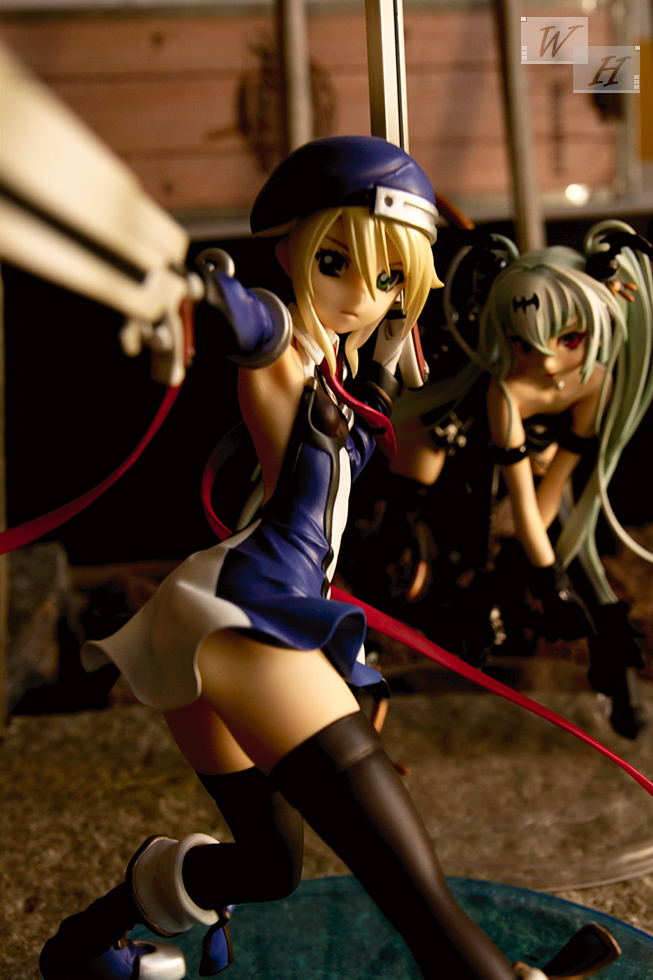 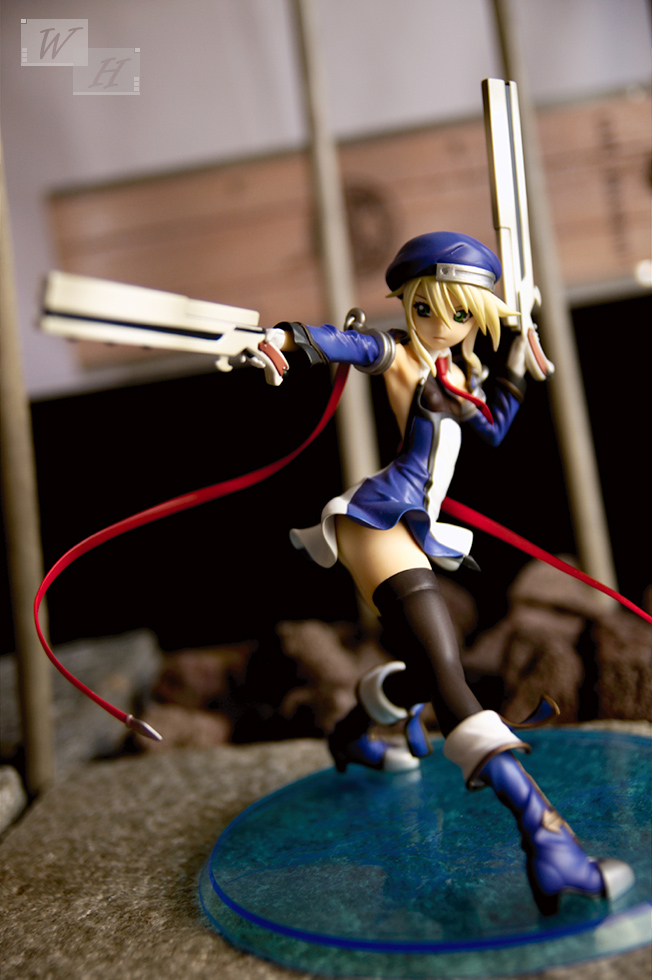 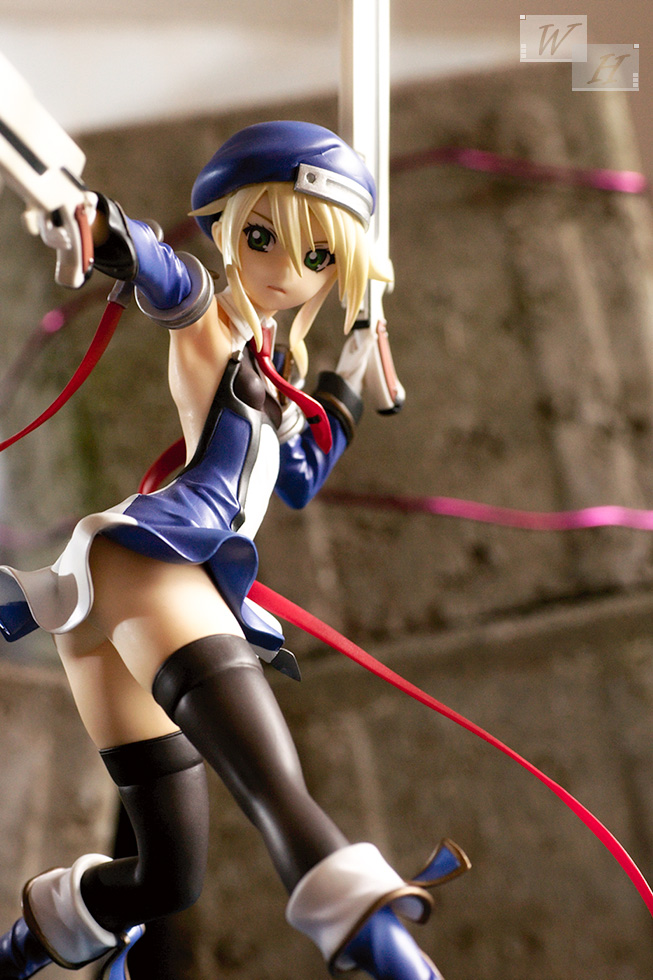 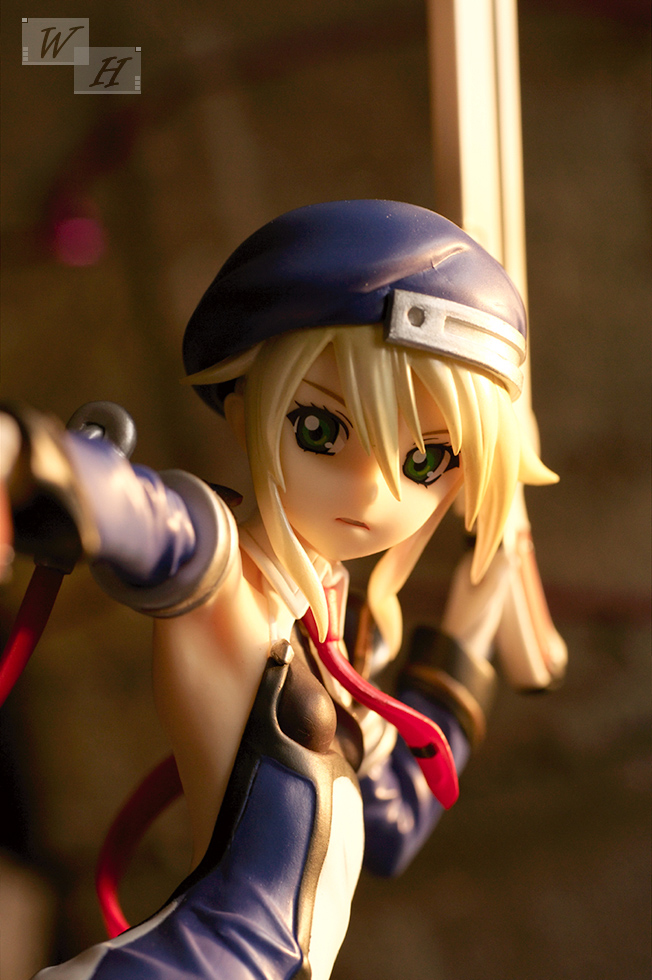 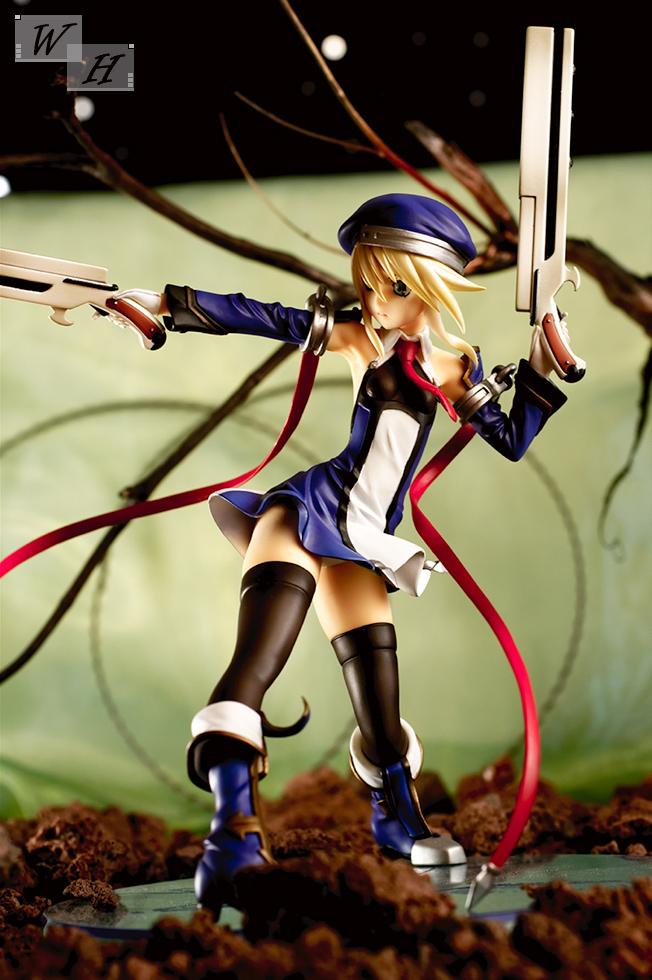