Hey people time for a new figure review this week – it’s about the beautiful Stocking.

Anarchy Stocking was manufactured by Alter and released in October 2012, the figure is scaled 1/8 and has a height of 20 cm. The origin of Alter’s Anarchy Stocking is the unique but quite plotless anime Panty & Stockingwith Garterbelt popular for it’s raunchy kind of humor.

With a more elaborate animation style I probably would have enjoyed it a bit more. The style looks crappy; it might have been kinda awesome with the nice look of the anime style I’m used to. What I liked the most in Panty & Stocking was the heavy cursing and the nice Stocking.

O wicked spirit born of a lost soul in limbo;

receive judgement from garb of the holy virgin;

return to heaven and earth; 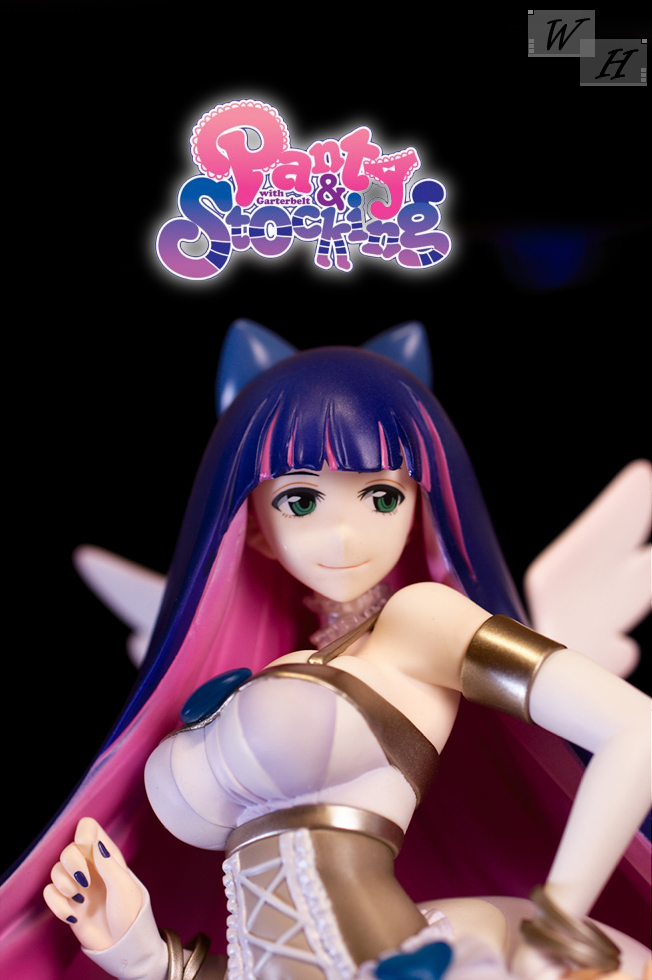 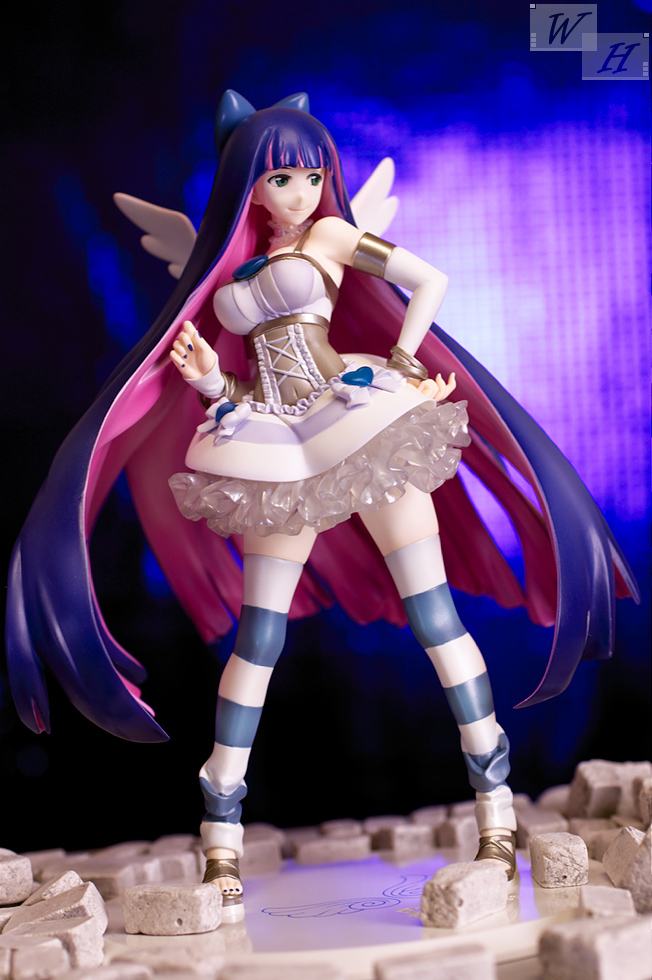 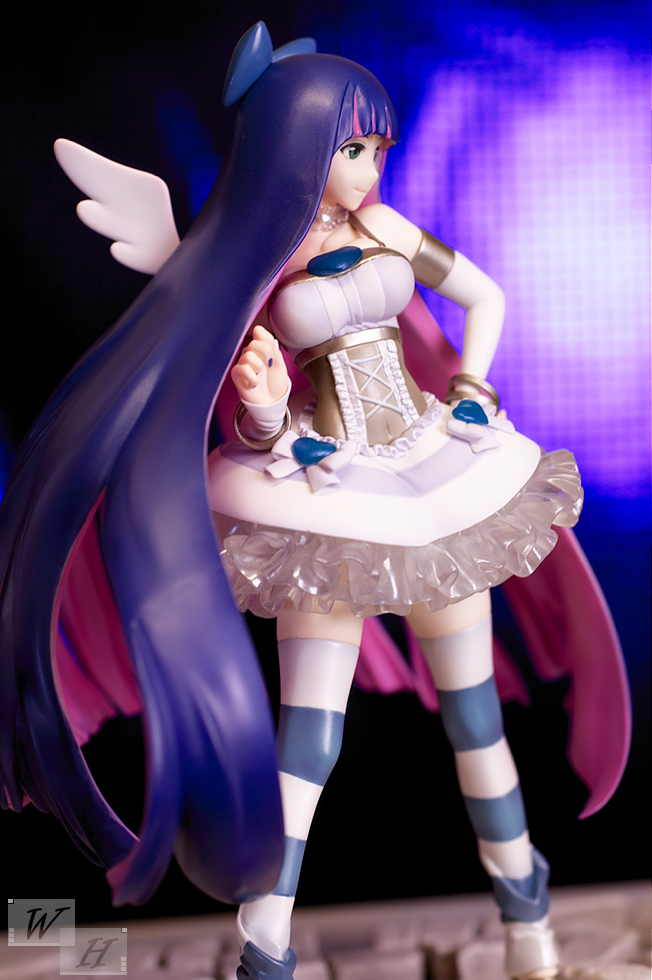 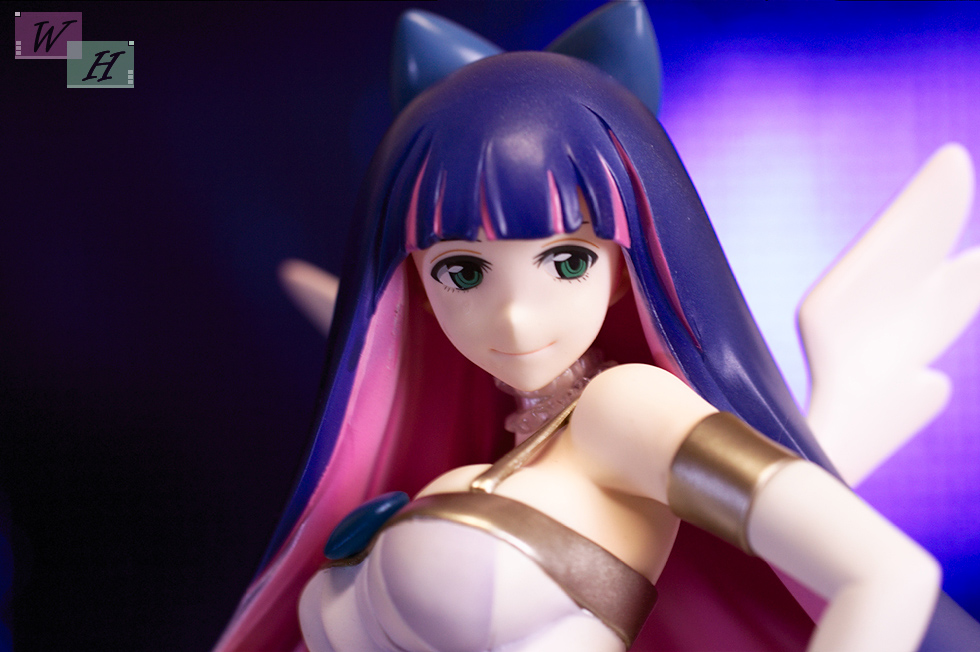 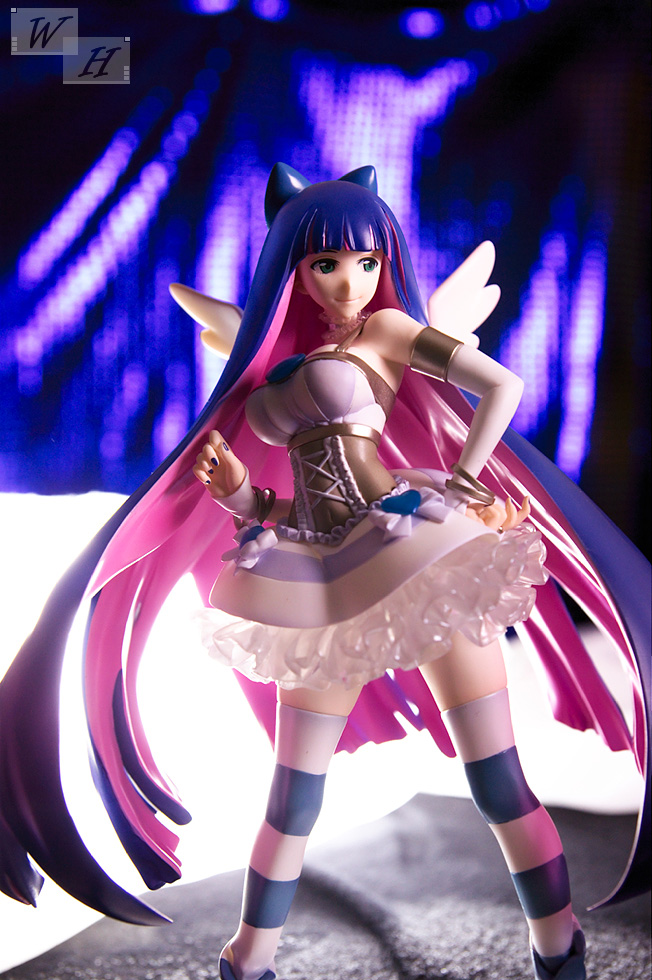 In her everyday life Stocking is at home at the gothik and emo scene and wears a gothic lolita dress. This figure is based on the sequence in the show where she and her sister transform into ghost hunting angels who try to collect Heaven Coins to get their halos back. 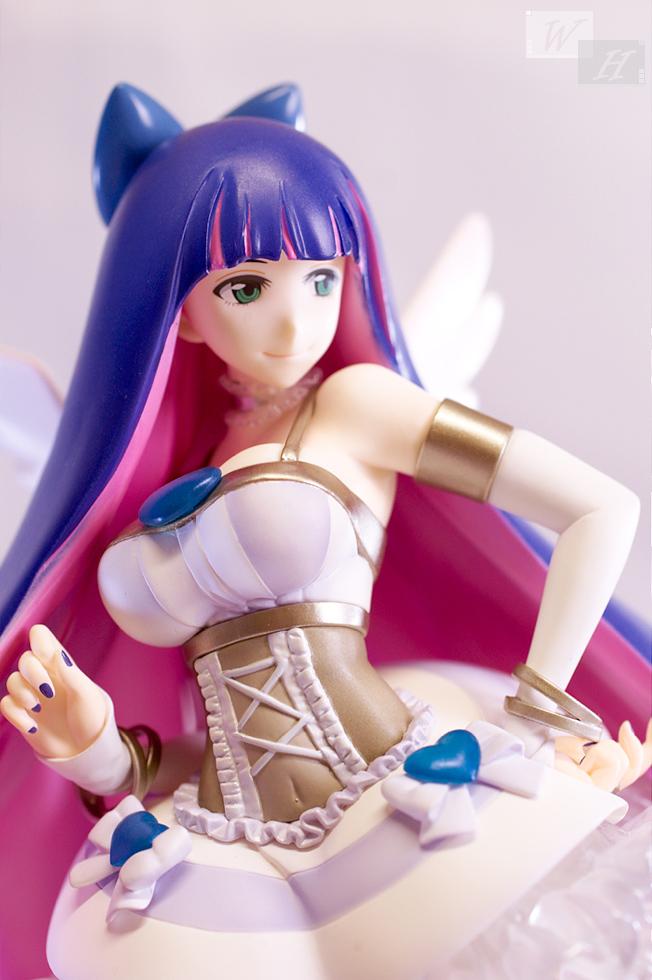 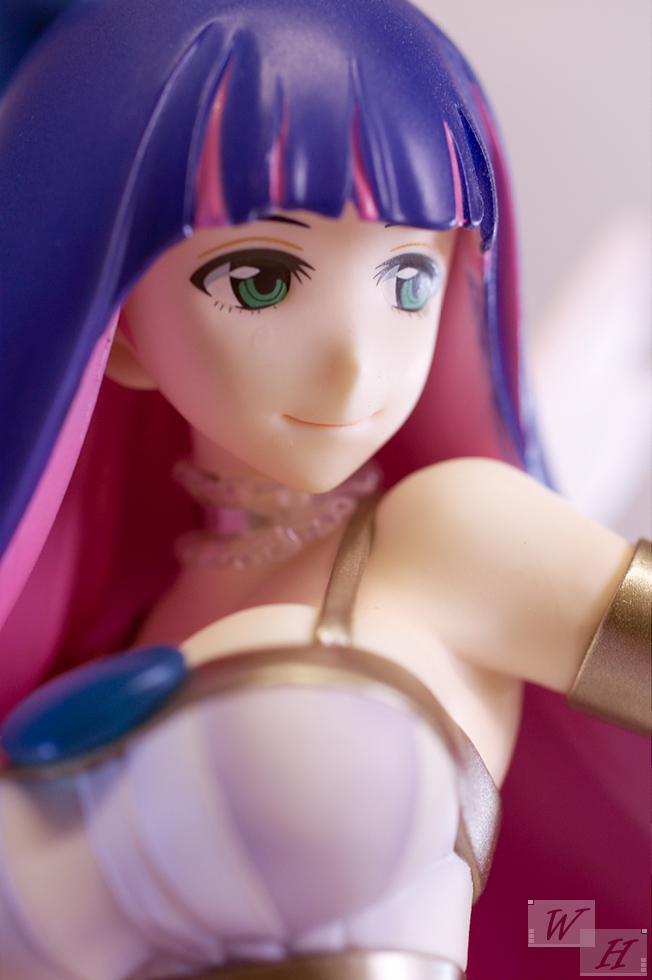 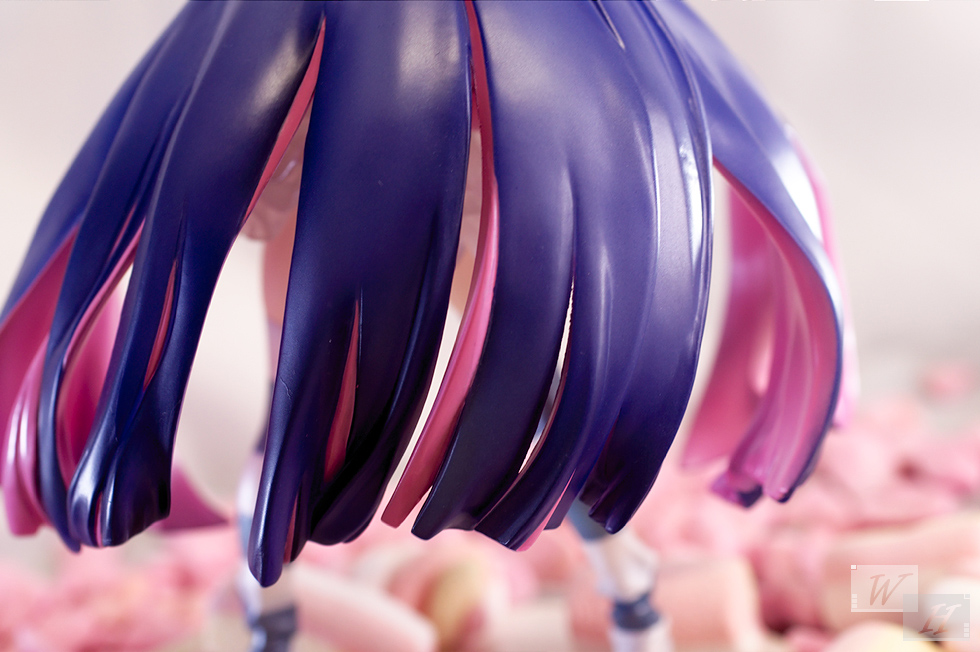 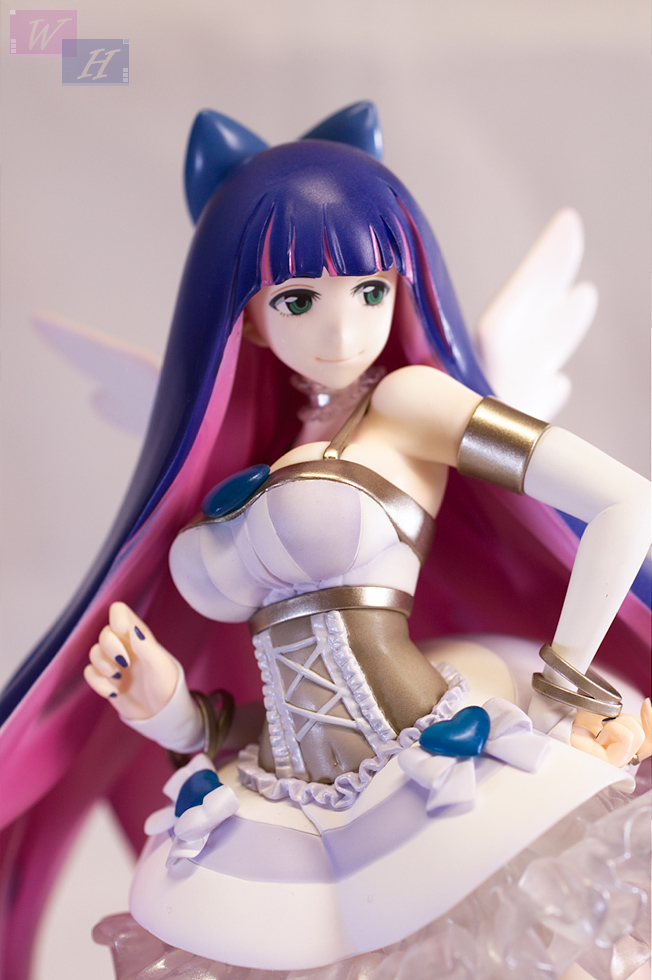 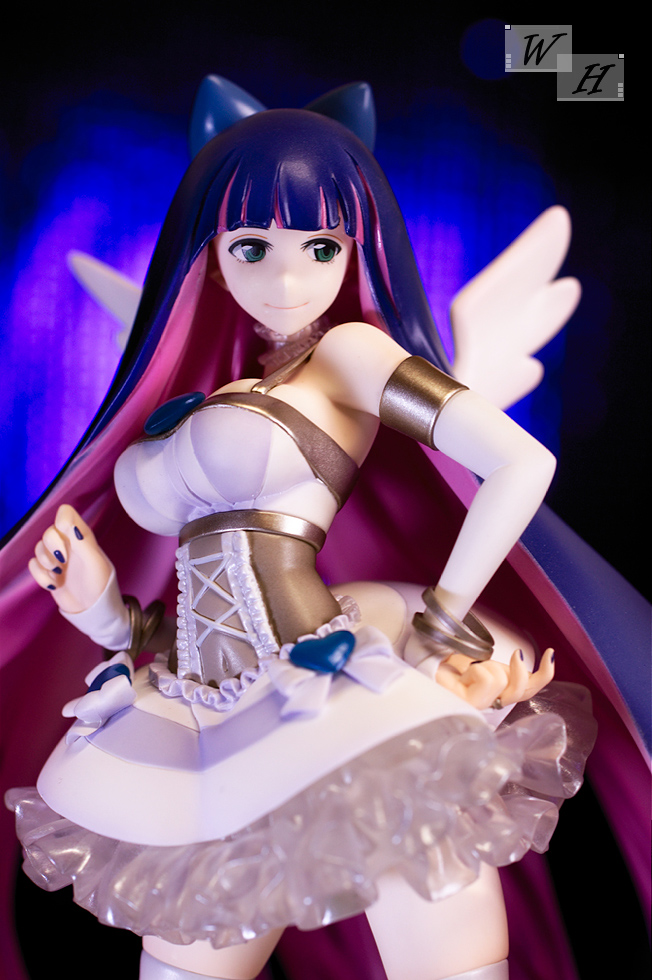 The hair of this figure is made from one piece in a quite impressive delta shape. The lack of seam lines is pretty nice and the purple color is pretty and the pink inside has a vibrant effect.

The hair is made of soft PVC and overall the sculpting looks good, even though there are a few bumbs and light scratches in two or three areas. What obviously went a bit wrong with this figures hair is the color transition from pink to purple at her fringe. In the outer strands they managed to paint them with more attention, but in the middle it’s not painted very clean. Other buyers of this figure had the same flaws. Well, since the gaps between the strands are only 1 mm width it’s a problem that only is noticeable from a close distance. Im not bothered.

Underneath her fringe she has nicely green slanted eyes, these are very attractive and give Stocking a more adult appearance. I think that Stocking is a really pretty girl, which is mainly noticeable in the anime transformation scene. She has a foul mouth, but she still has this kindness represented in her face, the kind smile is really something I like about this figure. 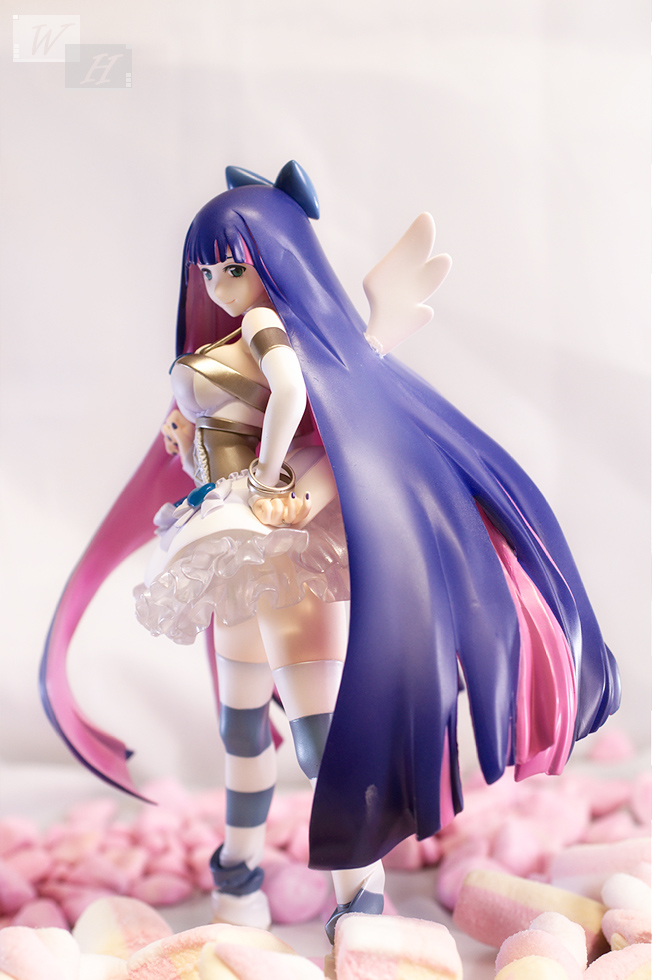 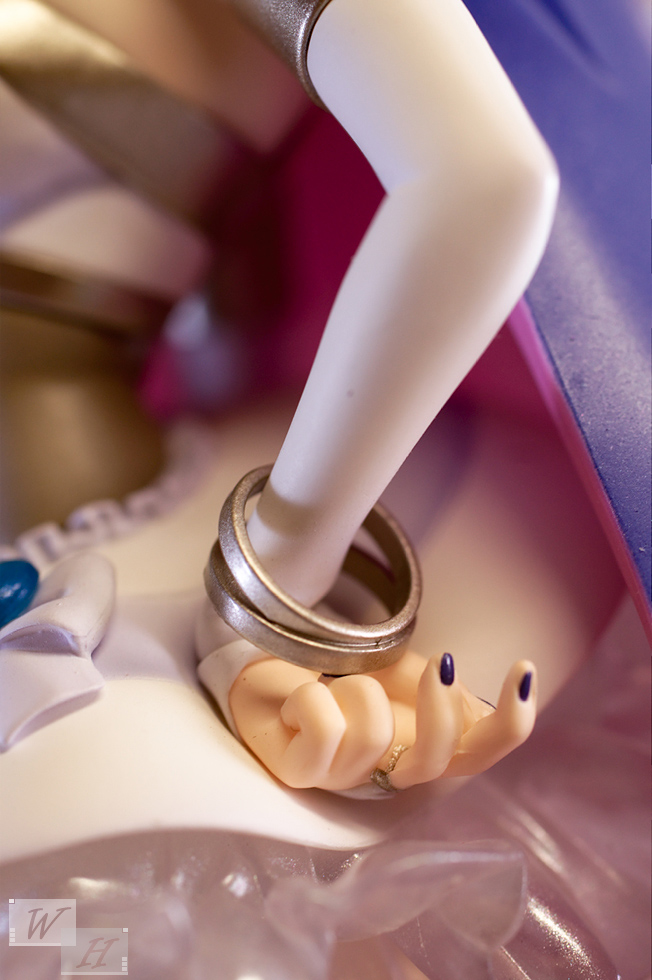 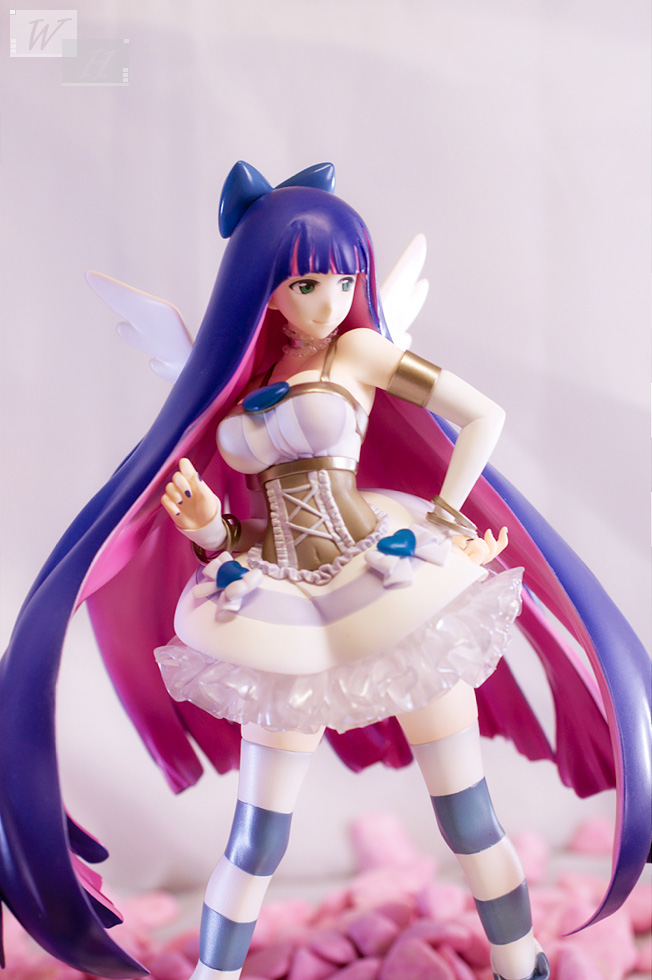 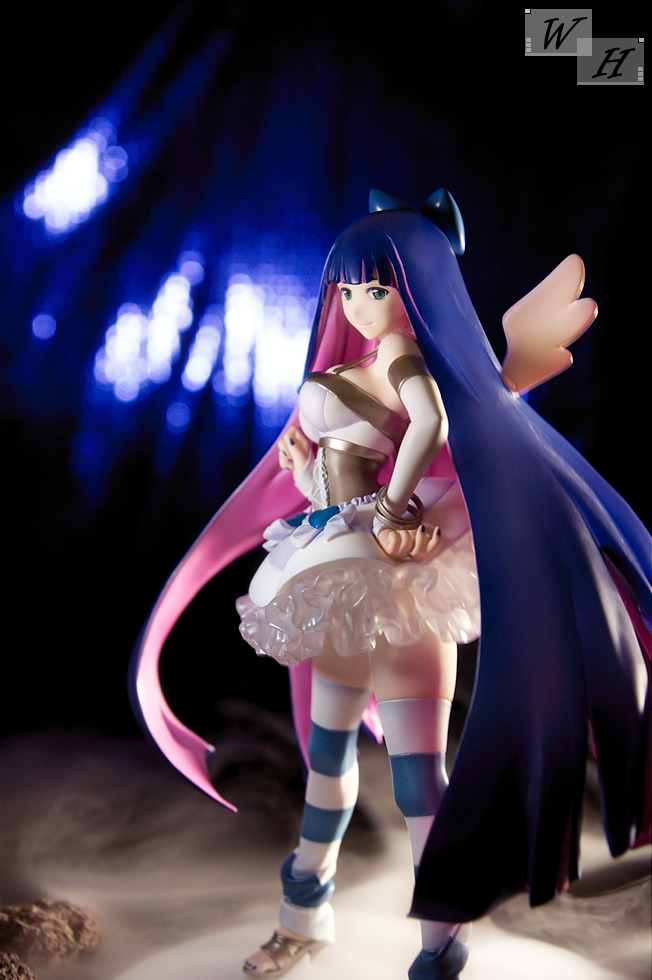 This figure is presented in her “battle” dress which looks similar to a magical girl outfit. It is a very fancy and fashionable outfit with many details and nice colors. Her boobs seem to be a bit too big for her top. The sculptor overdid it a bit since it looks kinda uncomfortable how the strap digs into her meat, but nevertheless Stocking presents her female attributes with pride.

Stocking has a full rack and shows it with her pose and the hair, the cleavage is mainly covered and doesn’t shout for attention. Alter is known for often choosing the save way.

Slightly below she is wearing a detailed corsage and the grey painted area around her belly has a slightly transparent look. It’s cute how her belly button sticks out ^^. I really like the skirt, the voluminous, short design with the transparent underskirt is simply beautiful.

As the name implies Stocking is wearing striped stockings, which are also her main weapons and can be transformed into a katana. Her stockings are a striped model with open ends at her feet. The blue parts have beautiful light and dark shading, further below the ends show some nice and detailed wrinkles. Her feet and toes are exposed and she is wearing stylish sandals in a platinum metallic like color, it’s the same kind of sandals as her sister Panty has

Her outfit is very appealing, also the smaller details, like the ribbon and the wings on her back. Other nice details are her finger less gloves and the pretty armlets around her wrists.

Stocking has the body of a young grown up woman in her twenties. I really like her body proportions and the nice sculpting. Stocking has a proud and charming pose, her arched back and the slightly turned position of her upper body gives her something very attractive, with her voluminous hair and the proud self confident pose Stocking looks like a powerful woman.

She has such a strong presence, she looks like the gang leader on my 1/8 scale figure shelf. 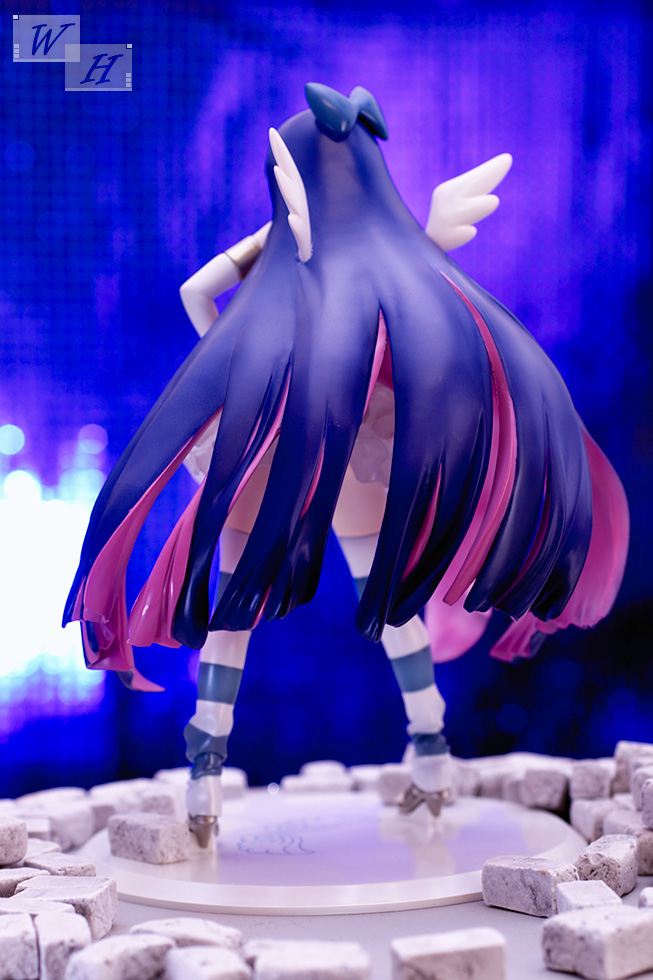 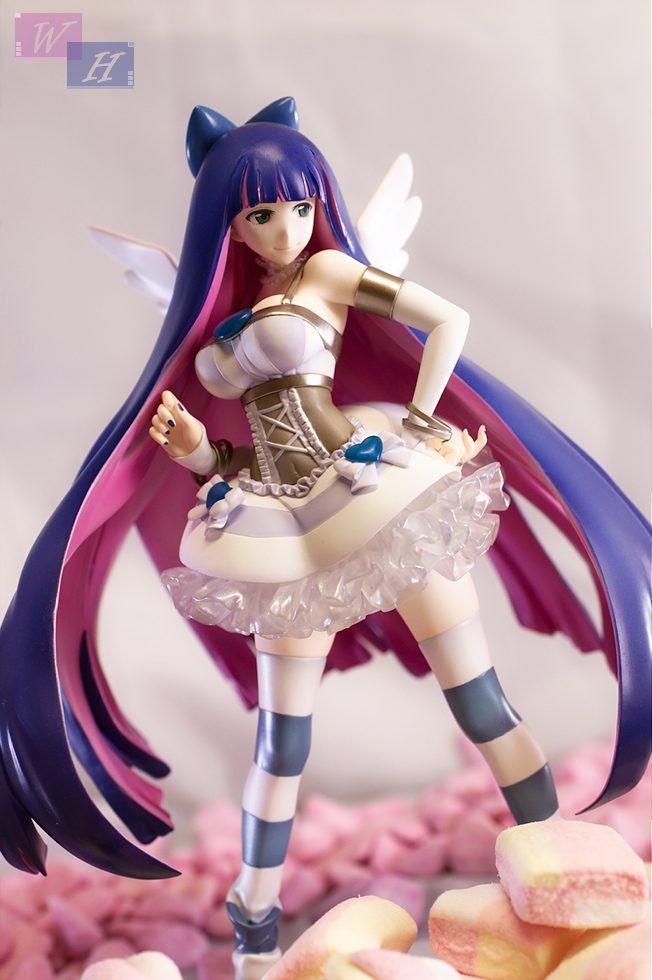 Alter’s Anarchy Stocking is a really nice figure, she actually is in my personal Top List of the figures which I’ve received this year, she has a fancy outfit, a sweet face and looks beautiful. While I’m not a big fan of the show, I admit that I love the design of Stocking and her outfit.

This figure reminds me why I started collecting figures, a fancy outfit with many details and a beautiful and proud appearance is where Stocking excels. Aside from the slightly unclean painted fringe this figure has a pretty paintjob and great sculpting quality. 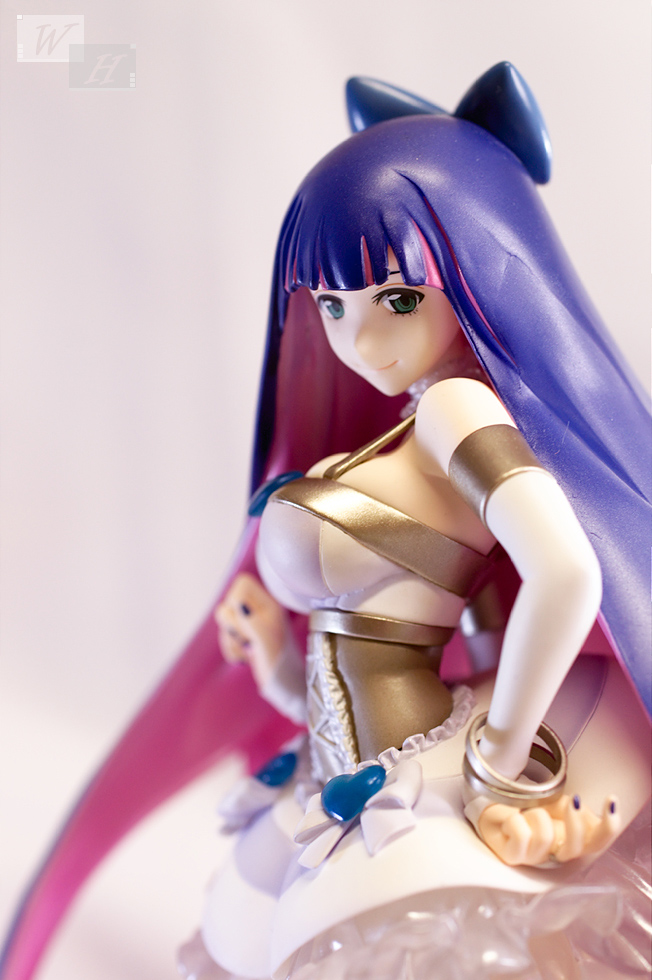 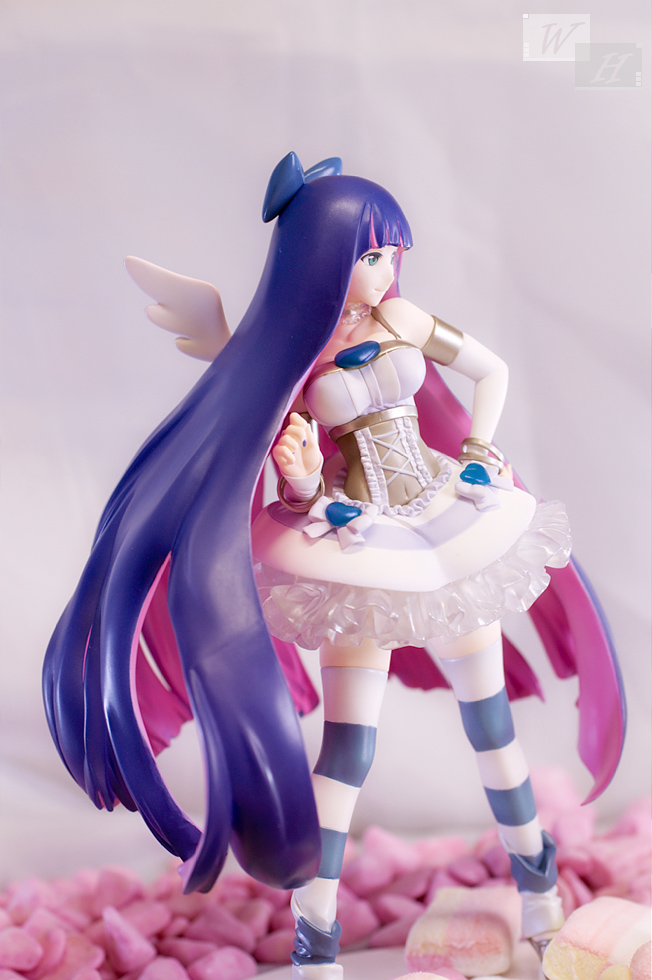 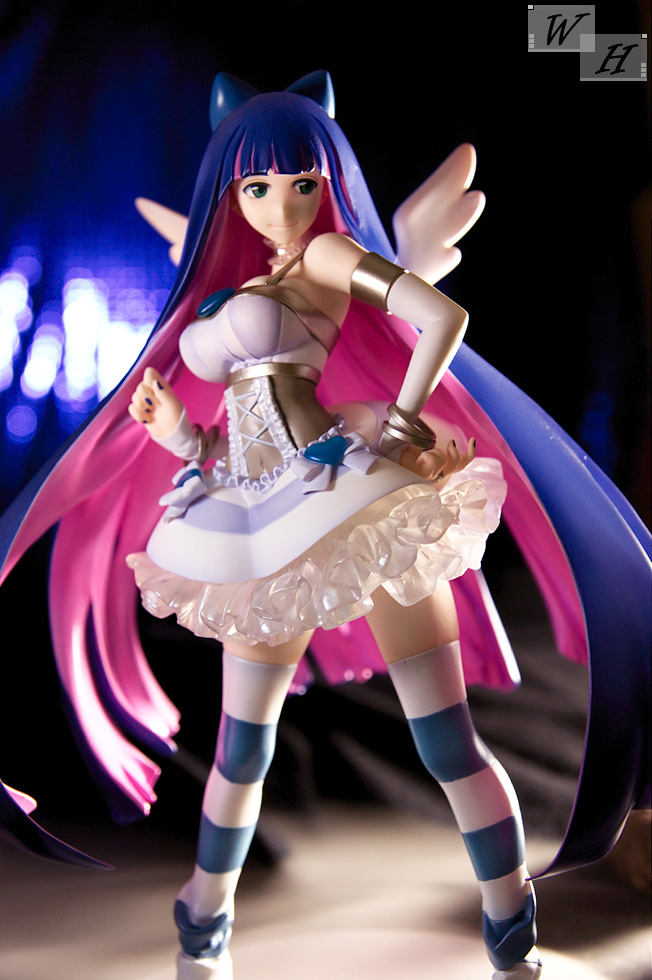 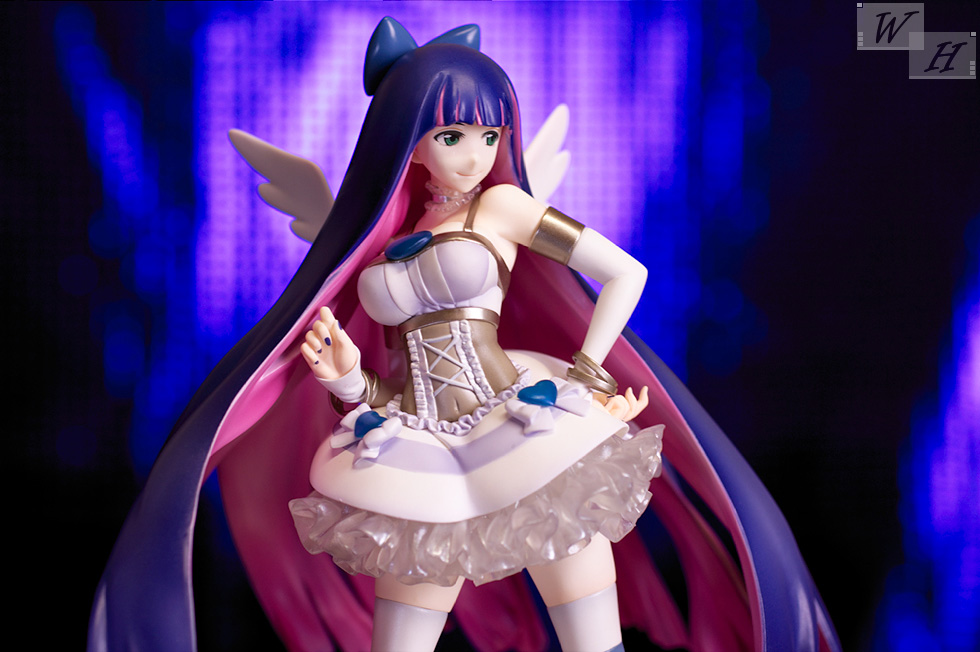 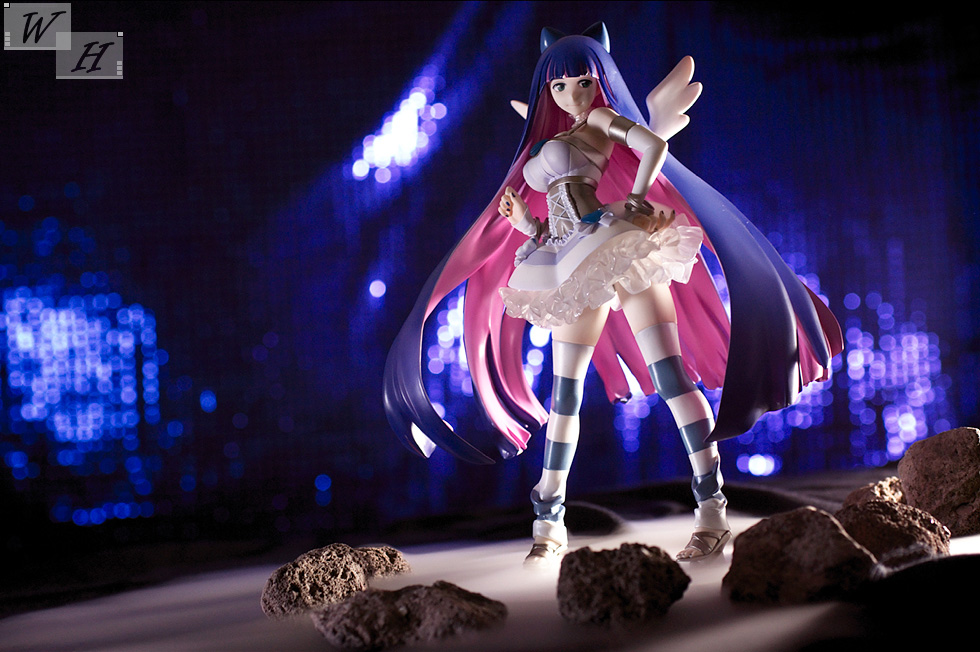 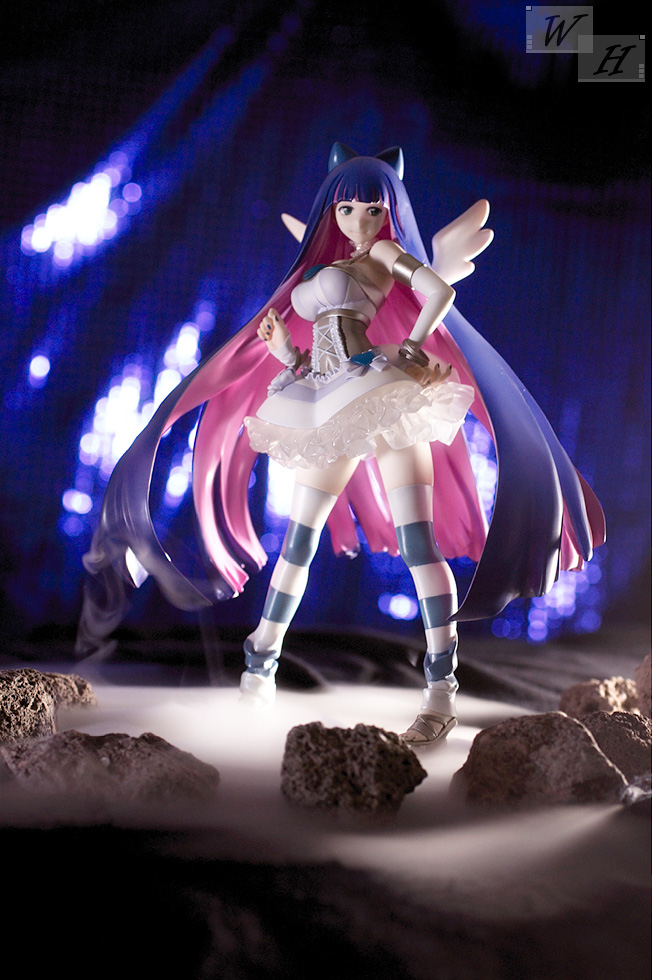 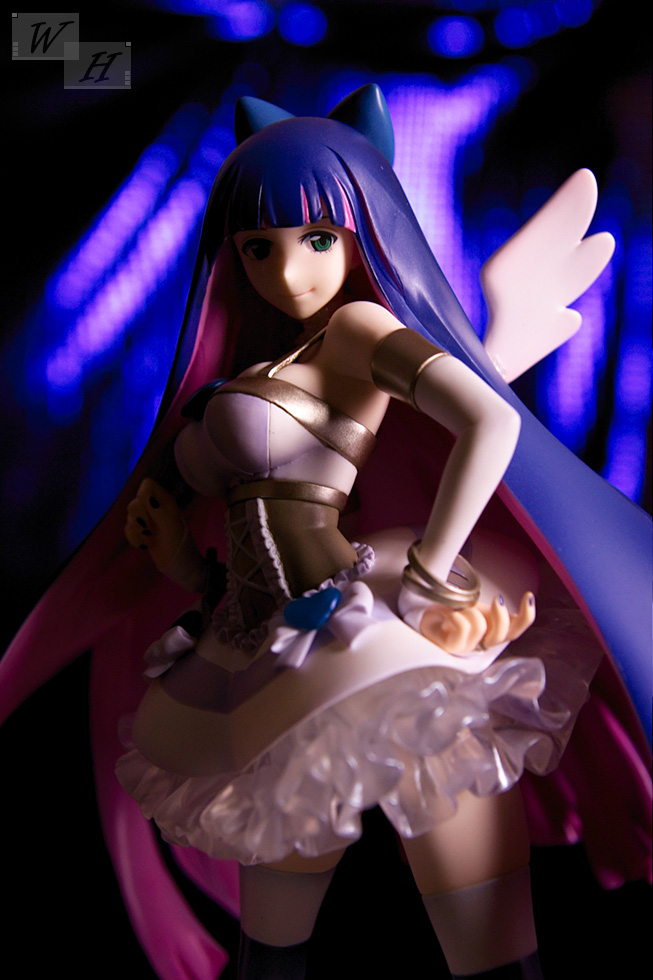