This review will be about my first Saber scale figure, funny enough that I didn’t start with Saber figure that showed her in her battle dress, could it be that I don’t really care about her character.

I found this one in AmiAmi’s preowned item corner for around 4800 Yen and thought it actually was good price considering that it was a figure that was around 10000 Yen a few years ago . The deal had one little flaw though, I thought I was ordering the Ataraxia – Saber Maid R version, the version which was a re-release, but I accidently ordered the old one instead *facepalm*.

This Saber was manufactured by ALTER in 2007 and re released in 2008. The Saber Maid version is scaled 1/6 with a height of 280 mm. The origin of this figure is Fate/Hollow Ataraxia, a visual novel from 2005 which  was produced by TYPE-MOON  as the sequel of Fate/stay night. Since I haven’t played it, please expect no qualified informations about the role of Saber in this review. 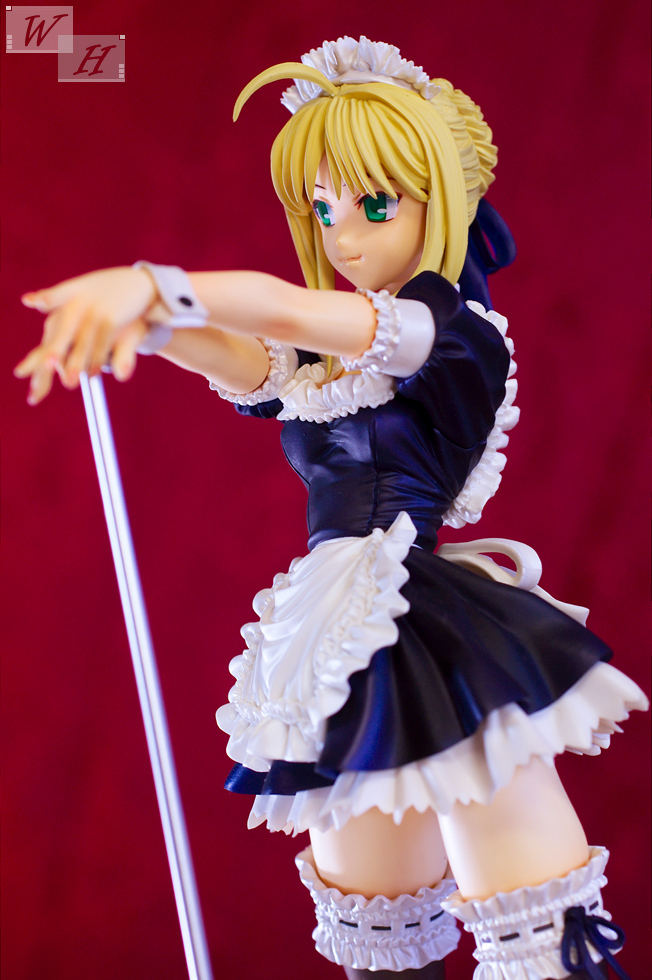 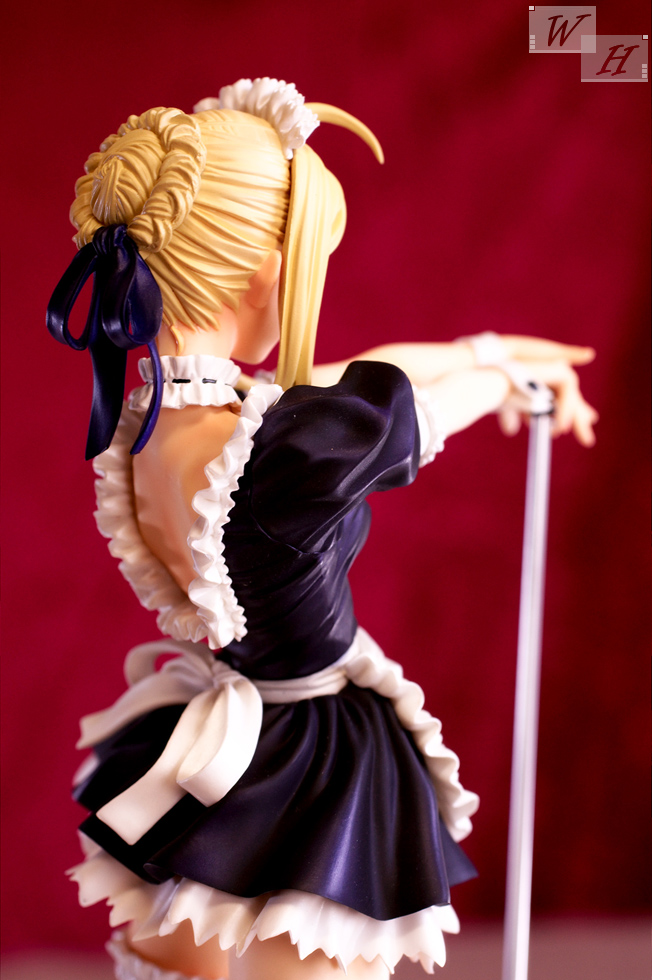 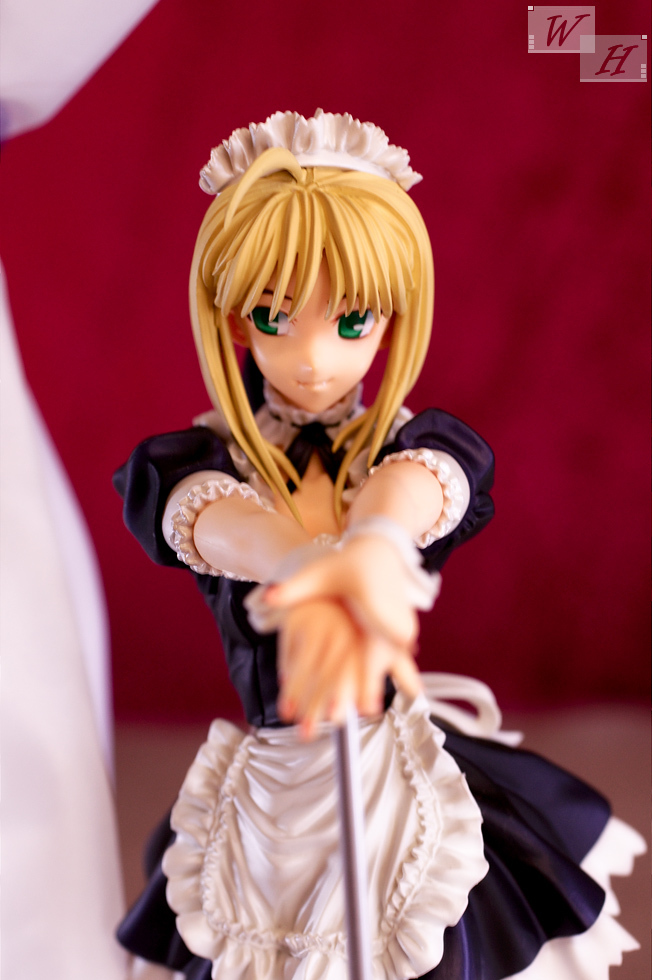 The figure has quite detailed hair in the shape of a beautiful tied up hairstyle with the typical ahoge. Her bun is decorated with a pretty dark metallic blue ribbon. The color of her hair is a little muddy yellow. Her face has an undeniable European look, Saber has pretty green eyes and a little gloss on her lips. Somehow I have the feeling that something is odd about her face it seems too narrow, which is very noticeable for me when Im looking at her pointy chin. From some angles she looks better than from others, but overall Im not that satisfied with the face to be honest. 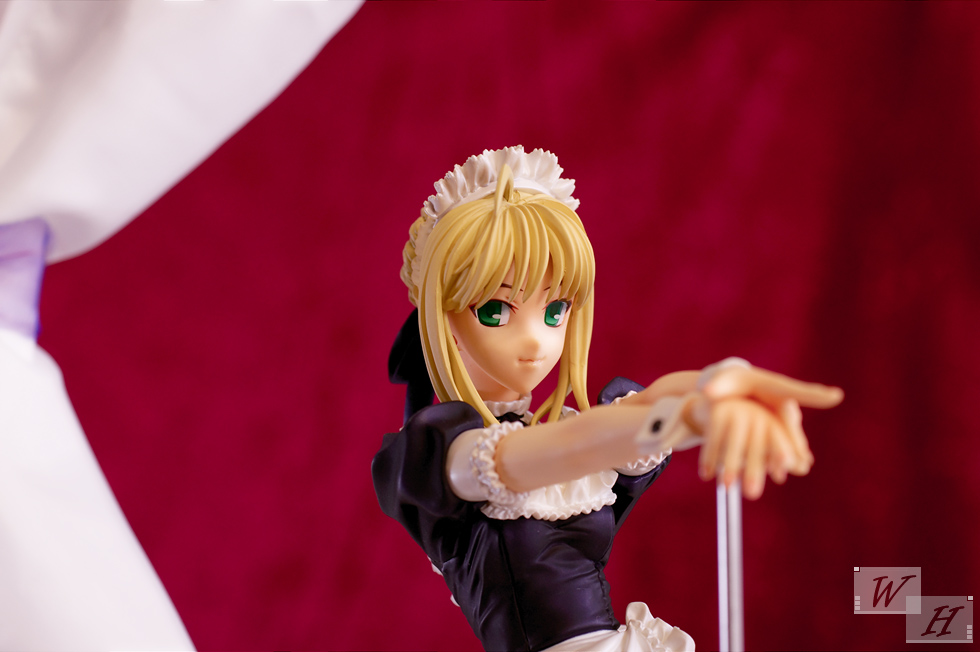 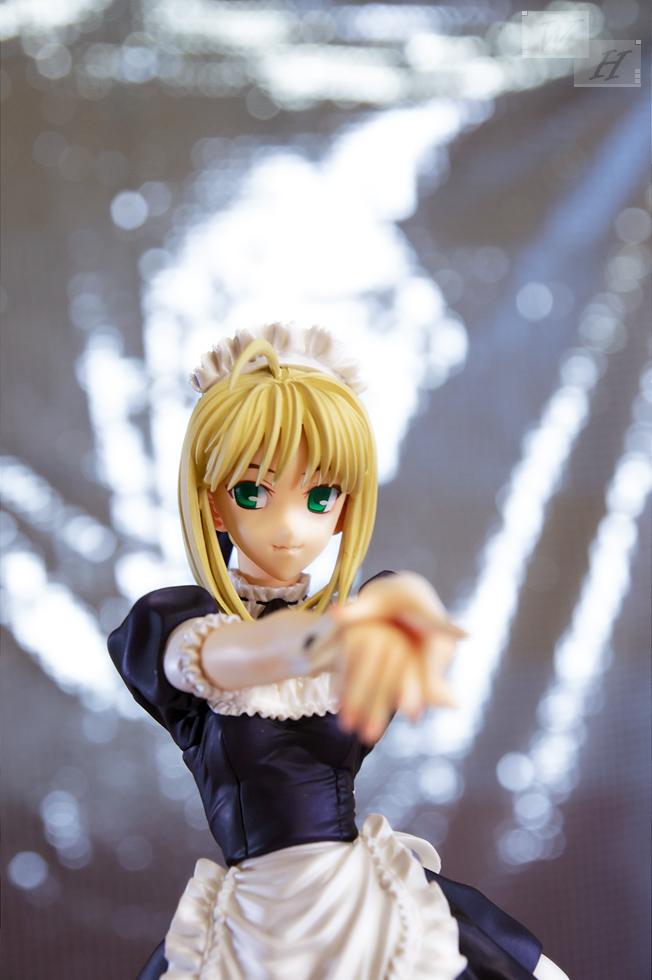 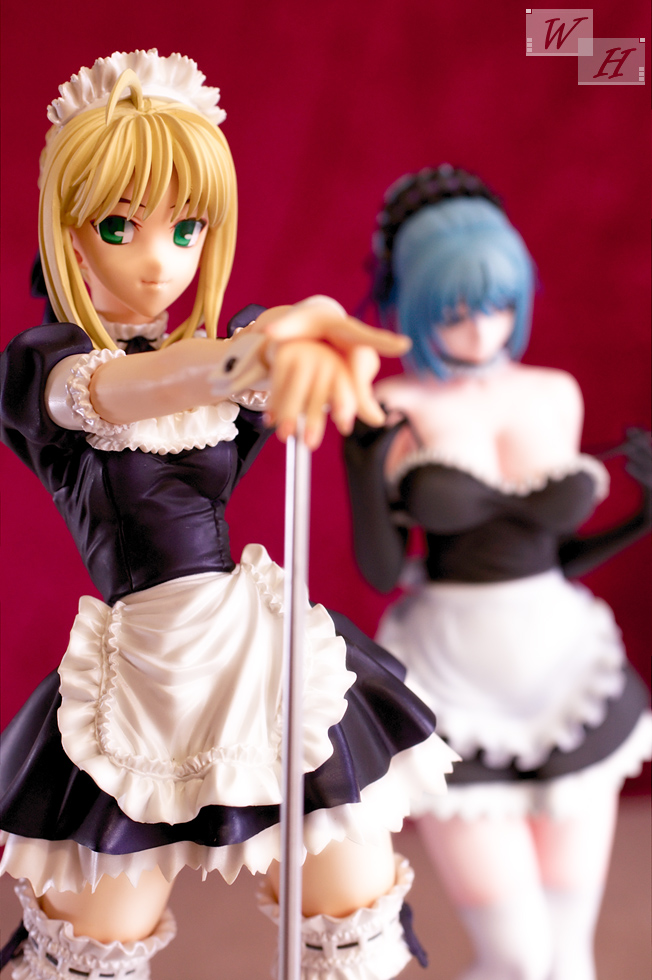 Saber in maid attire looks very appealing, for some reason I always had a liking for these kinds of outfit since I came in contact with the anime culture. I like the contrast of dark and white colors and the frilly details. I also think that it looks quite cute on a girl. Next to Saber I already ordered two maid related figures in this year, Sansei Muramasa and Kurumu Kurono.

The white parts of her outfit have a slightly pearl effect and create a nice contrast to the dark blue main colors of her outfit. The detailed sculpting and the lighter shading recreate a nice and also realistic look. Under her short shirt she is wearing pretty yet revealing white panties, I have to say that she’s pretty detailed underneath, remember this a ALTER figure. The part that reminds of her heroic background is the white saw toothed underskirt she also wears under her armor. 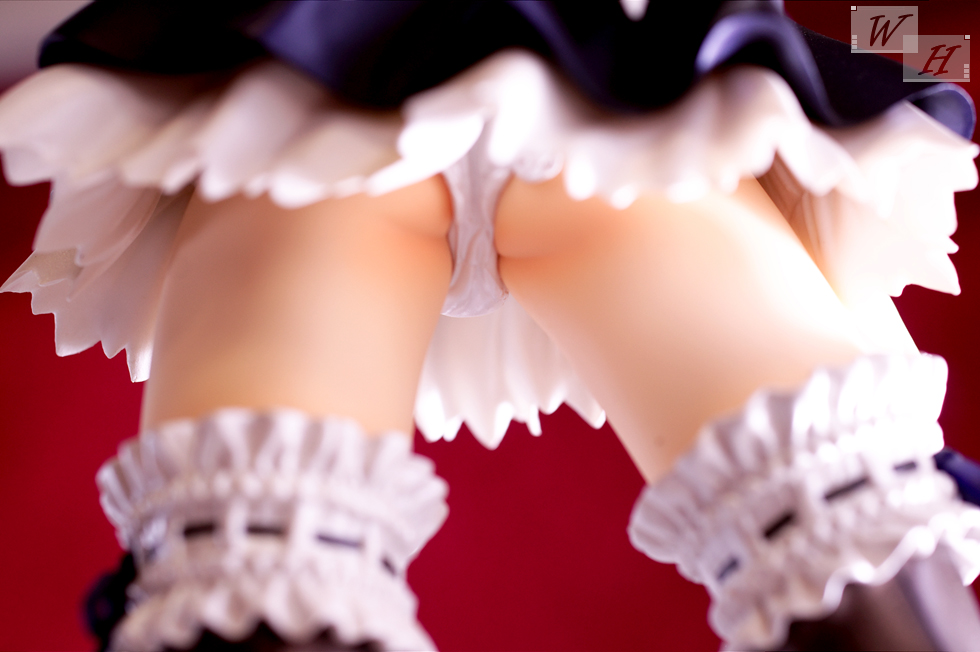 While her small chest is not very prominent, Saber has other aspects that know to convince.
The cleavage  at her back is a very attractive eye catcher, the ruffles next to her skin create a very appealing look. Her legs are very attractive parts as well and show a sexy Zettai Ryouiki, the area between thigh high stockings and miniskirt. I really like her dark stockings with the frilly band around the top, the smaller metallic blue ribbon at each band add some playfulness to our sexy Saber Maid. The shading on them give her thigh high stockings a feel of transparency.

The paintjob and the sculpting of her clothes and body are on par with quality figures of today. 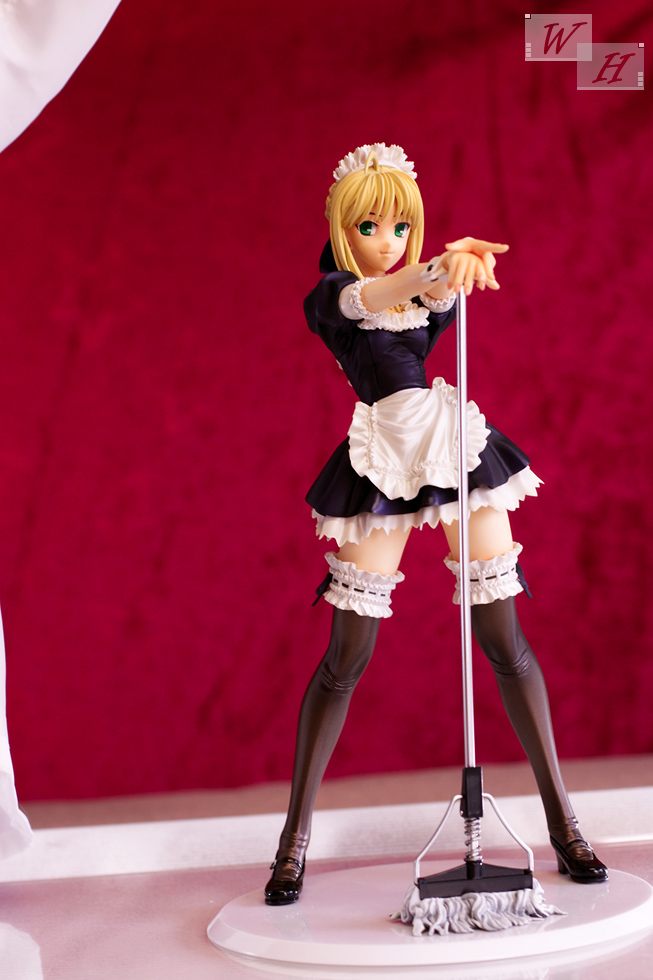 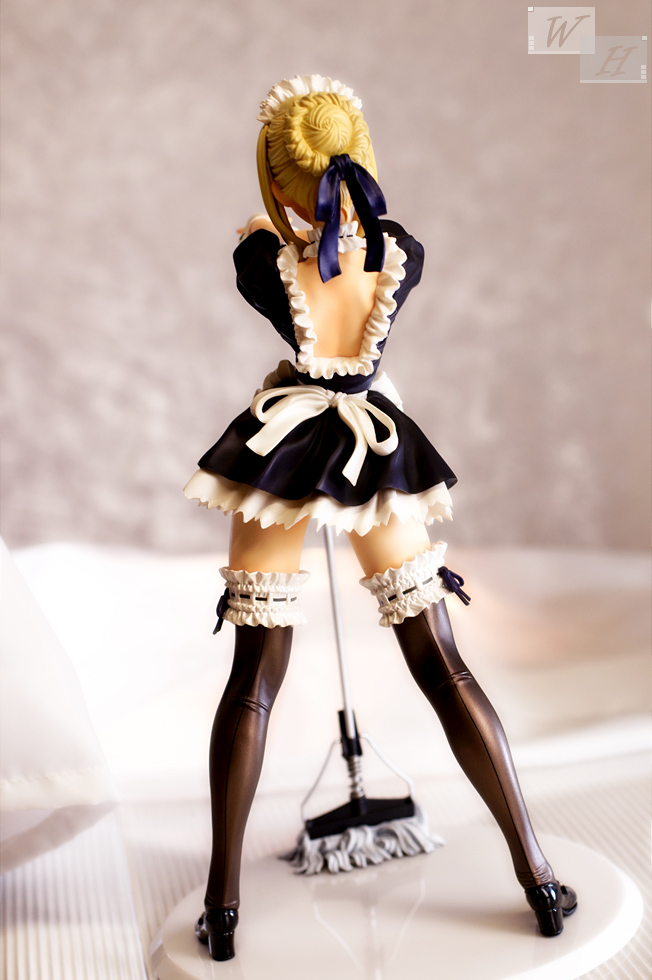 What I like the most about this figure is the proud pose, I really like the combination of a sexy and super confident Saber, not the pityful image she made during Fate/Zero. With her stretched arms leaning on her cool looking mop Saber also radiates a feeling of dilligence and a hard worker.

The paintjob and the sculpting of her clothes and body are on par with quality figures of today. 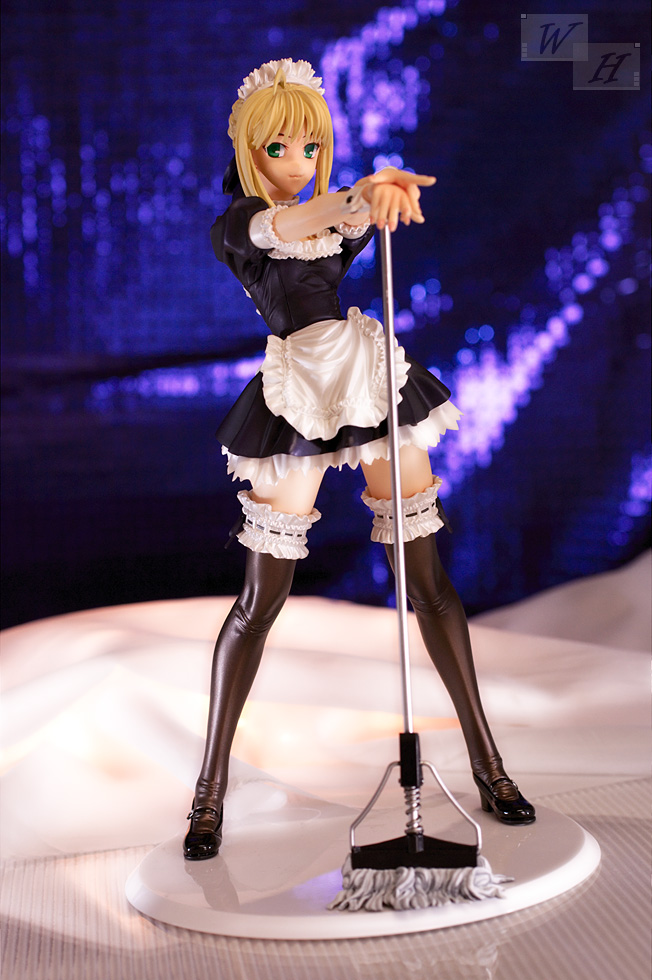 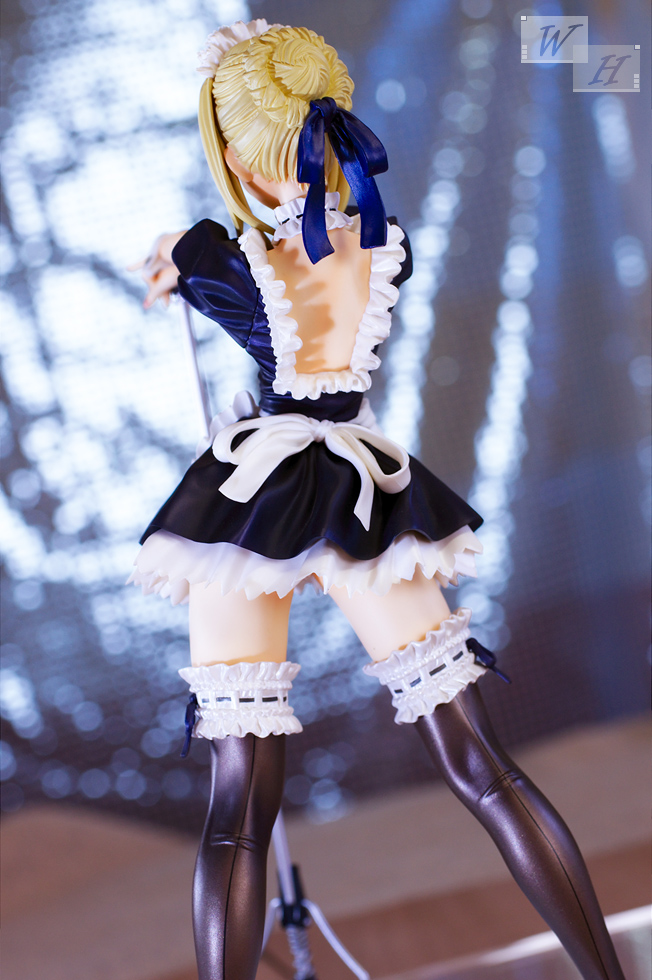 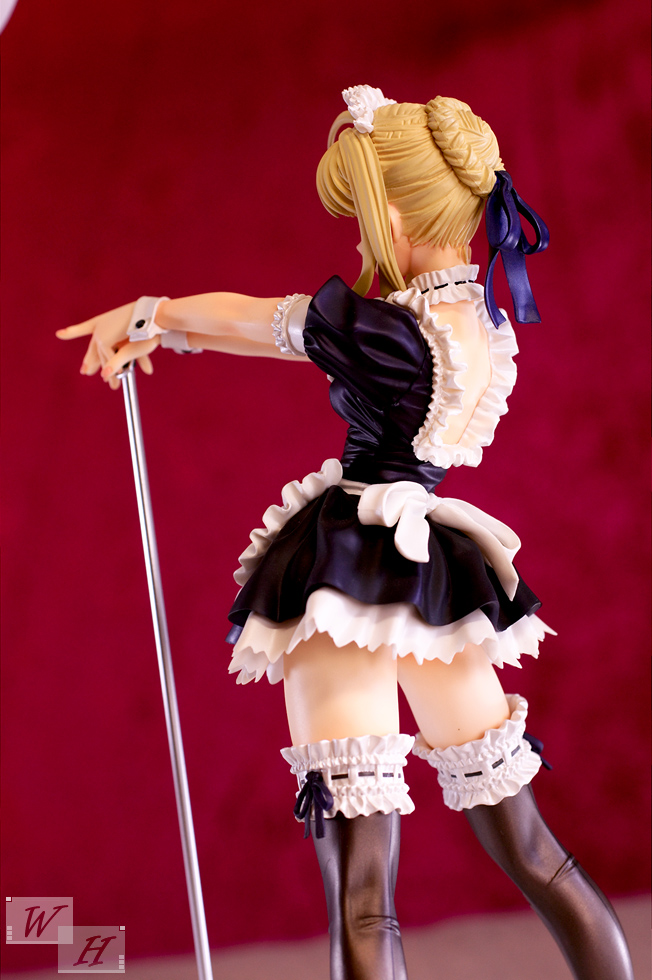 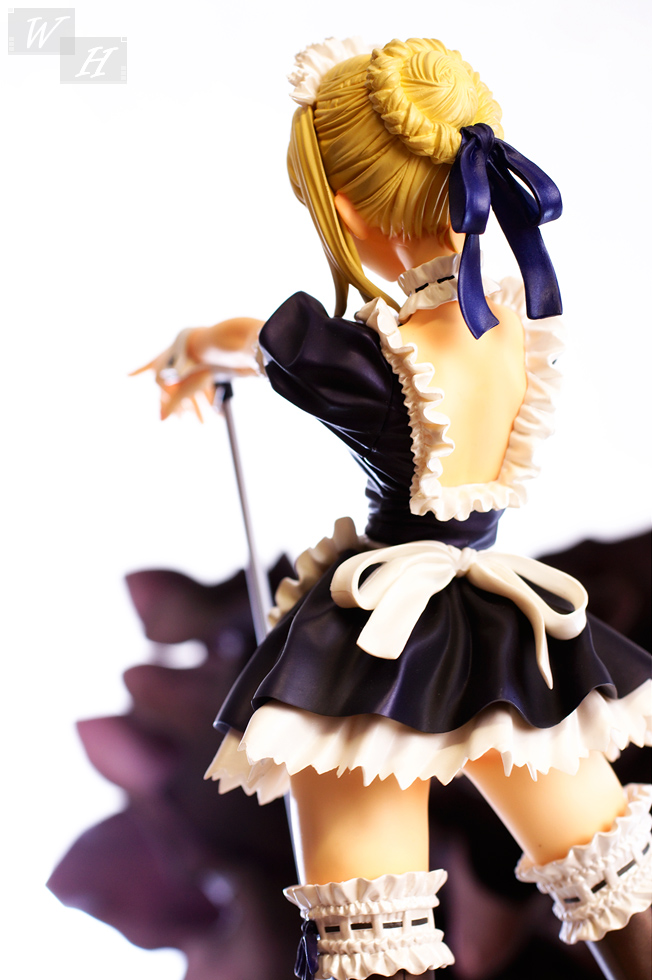 So is this old Saber Maid a figure I would recommend to get?

No, actually not, would it be for the cool pose and the lovely maid outfit alone, I would keep this Saber figure with pleasure, but the narrowly sculpted face and the very yellowish tone of her hair actually bother me that much, that I don’t want to keep her after writing this review. Im going to sell this one and order the Saber Maid R version that I planned to get in the first place.

There are rarely figures from 2007 or from earlier years, that can compete with the craftsmanship and quality that the big figure manufacturing companies are offering today. I will keep this in mind when I feel like getting a figure that was popular in the early days of this figure collecting hobby. 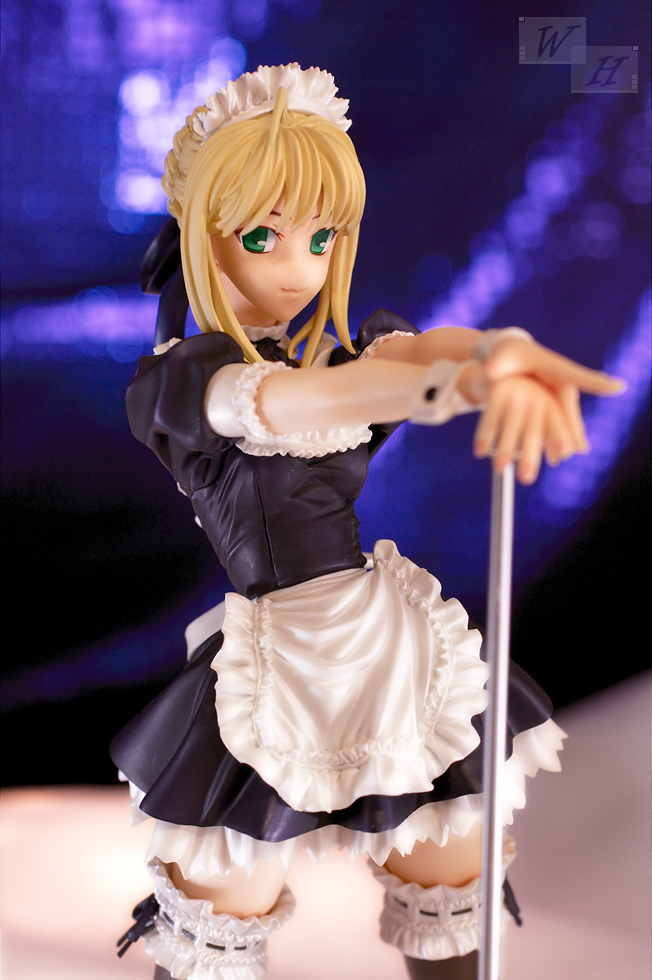 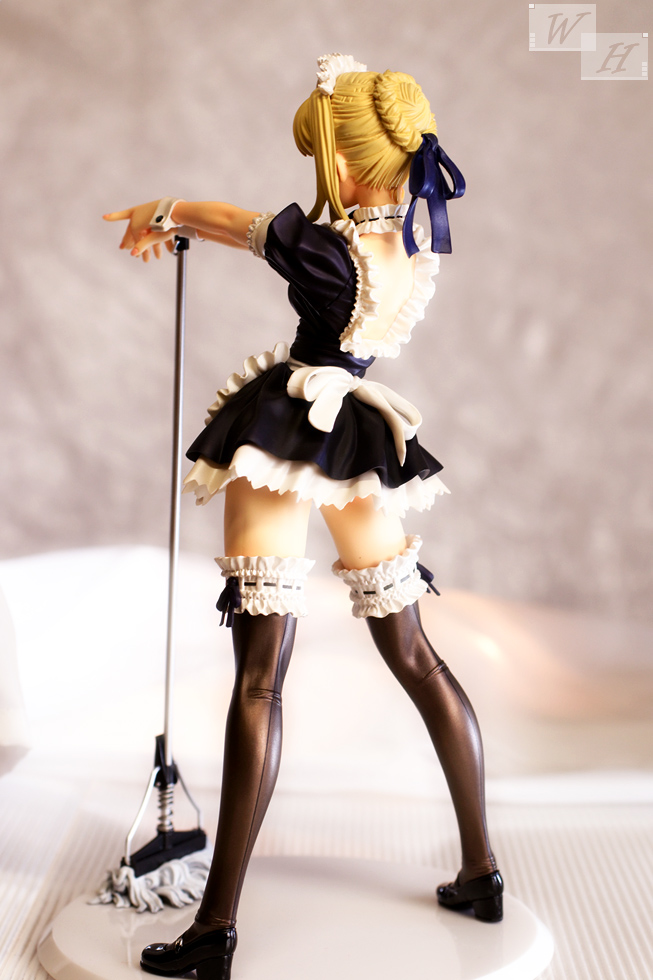 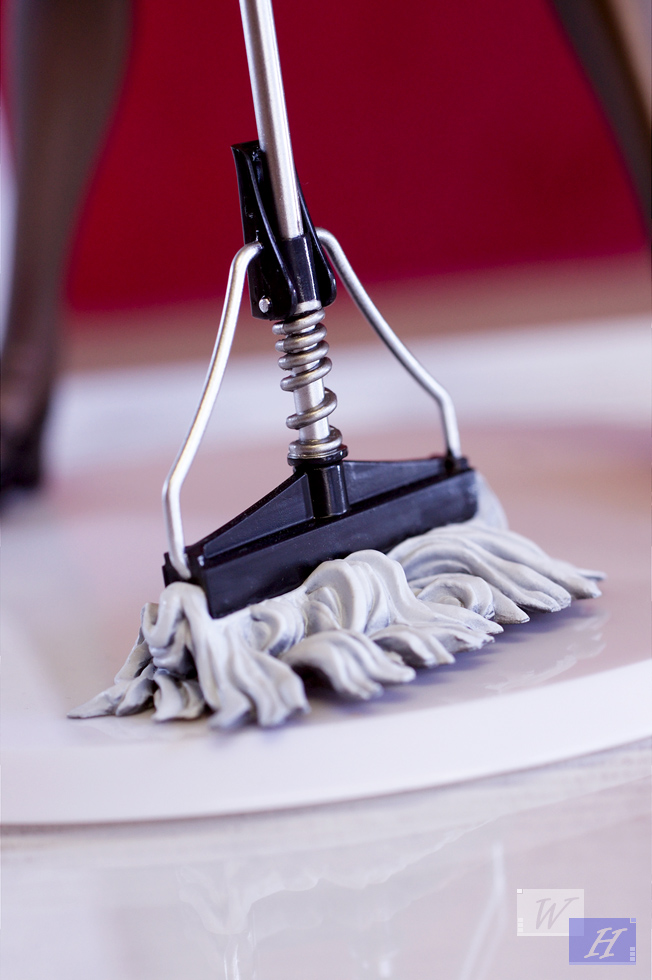 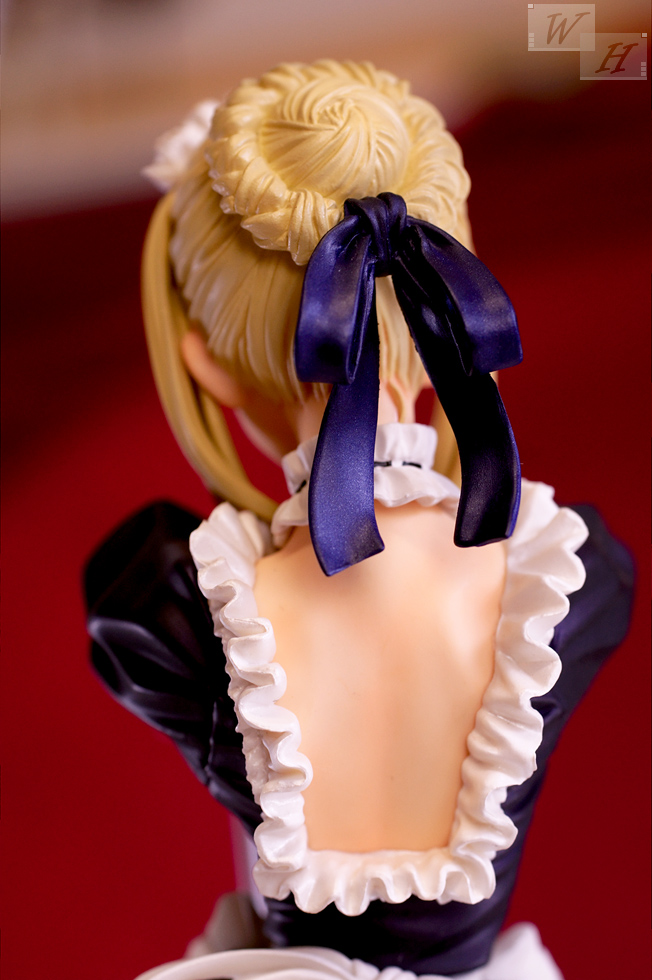 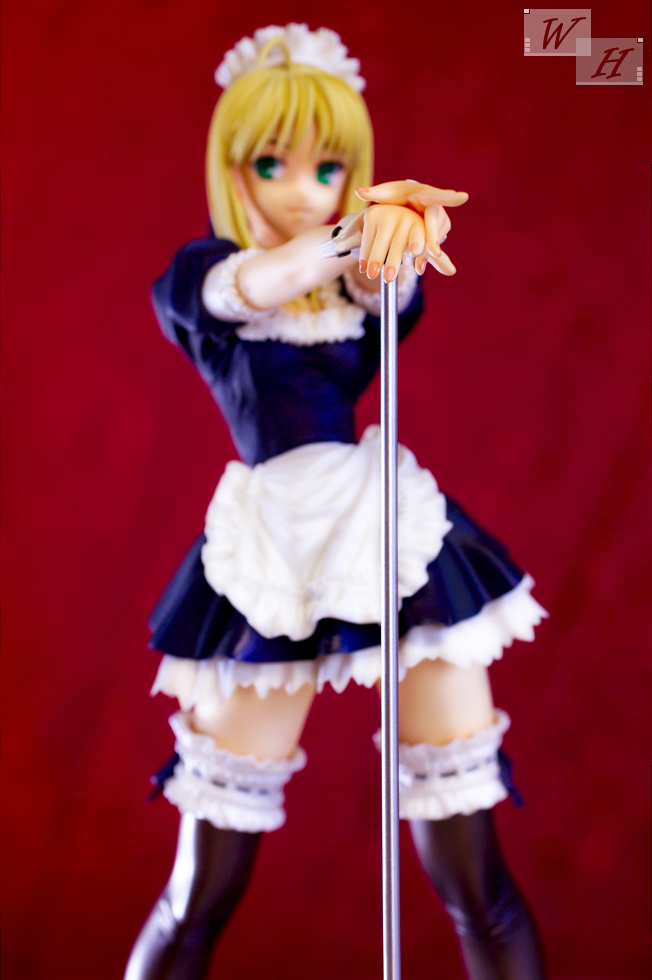 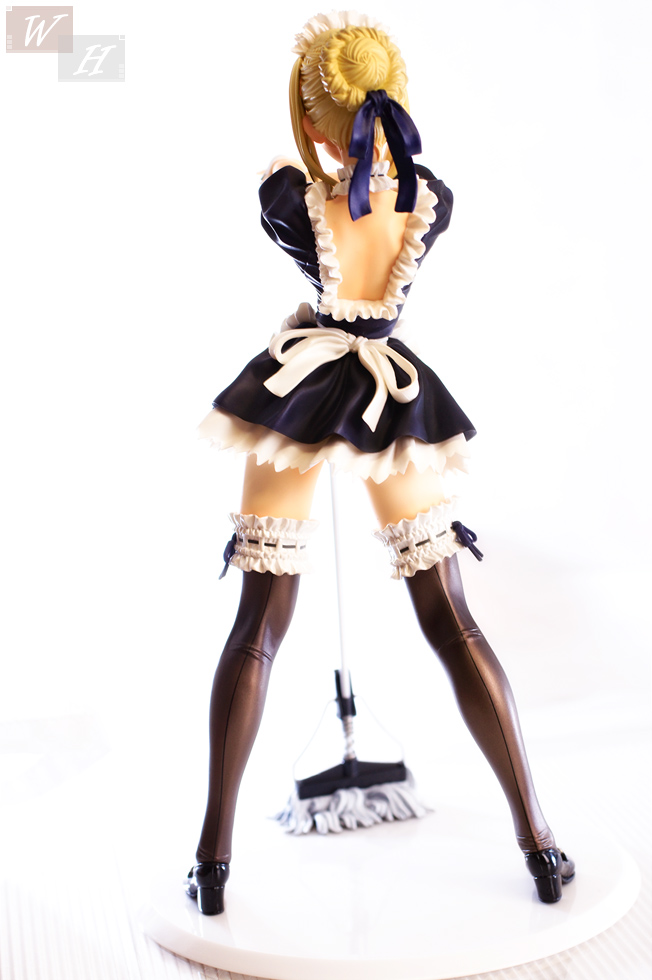