This figure of Hibari was manufactured by Phat Company and released by the end of November 2013. This version is scaled 1/8 and has a height of 180 mm.

This certain figure is based on a Garage Kit from Ringo Renmei, I nearly bought that GK, even though I could never finish it on my own, I  still think owning is better than not owning ;D. There have been many GK’s that I wanted as painted PVC figure, but that rarely happens. Fortunately Phat Company quickly got the rights from the sculptor and announced the PVC figure of Hibari.

Hibari herself comes from the game Senran Kagura, a few days ago I knew nothing about it, but Miette told me that there is also a manga about it. I’ve read all available chapters within a few hours ^^

Hibari  is a 1st year student of the National Hanzo Academy, she takes part in the Ninja classes together with her friends Asuka, Katsuragi, Yagyuu and Ikagura. Hibari is a very cheerful, feminine and cute acting person. As part of the “good* ninjas, Hanzo fights in order to prevent crimes in the area, their arch enemy are the “bad” ninjas from Snake Girls School. The Hanzo girls aren’t especially good in combat and while Hibari has the right spirit she is the weakest fighter. 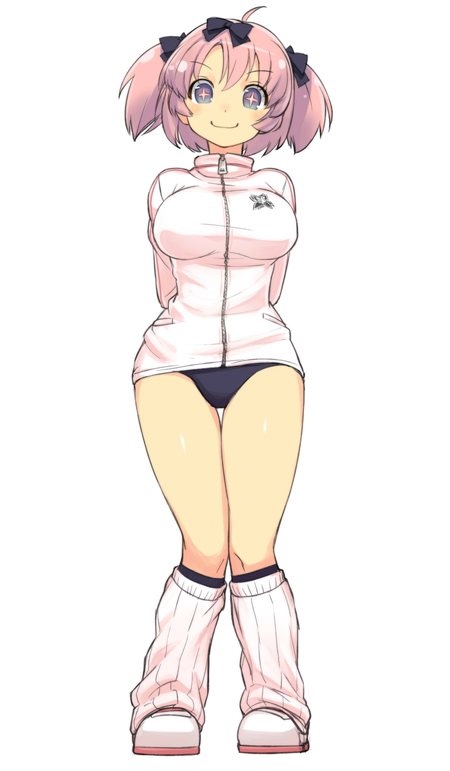 Senran Kagura is a mix of action, comedy and seinen. It also has a few parody elements and makes fun of martial arts related animes, still it takes his own story serious. I liked to read this manga with it’s appealing character designs. An anime adaption is scheduled  for January 2013

Up to the Review part…

I can say in advance that Phat Campany surprised me in a positive way with their Hibari figure. 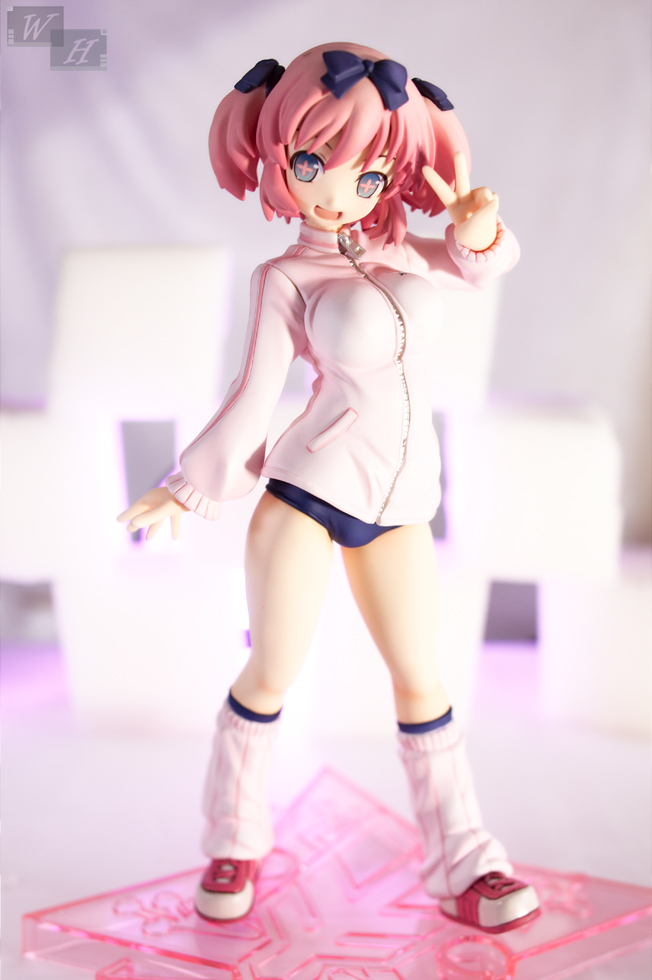 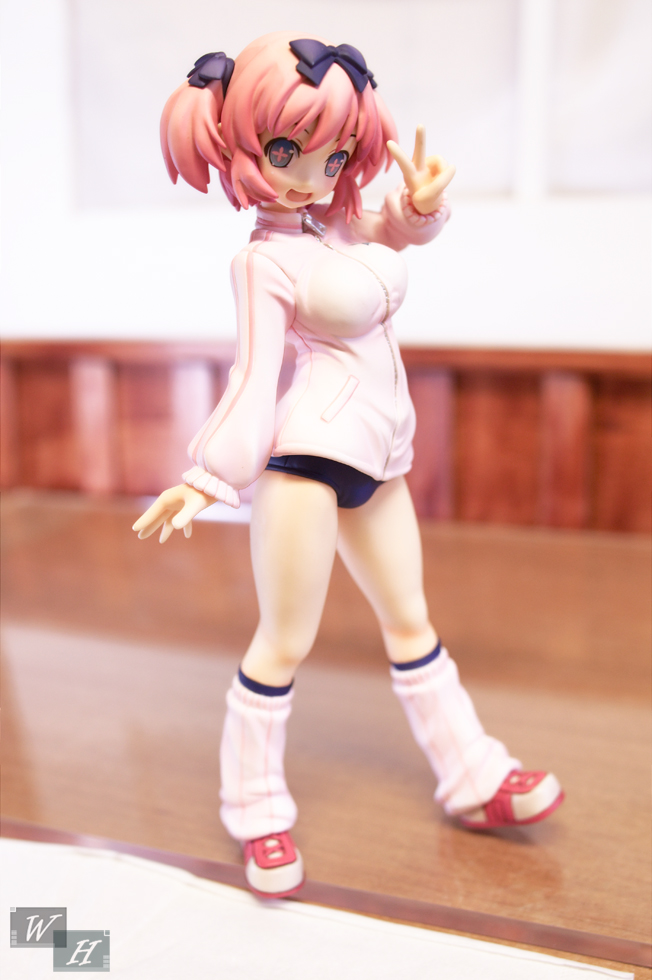 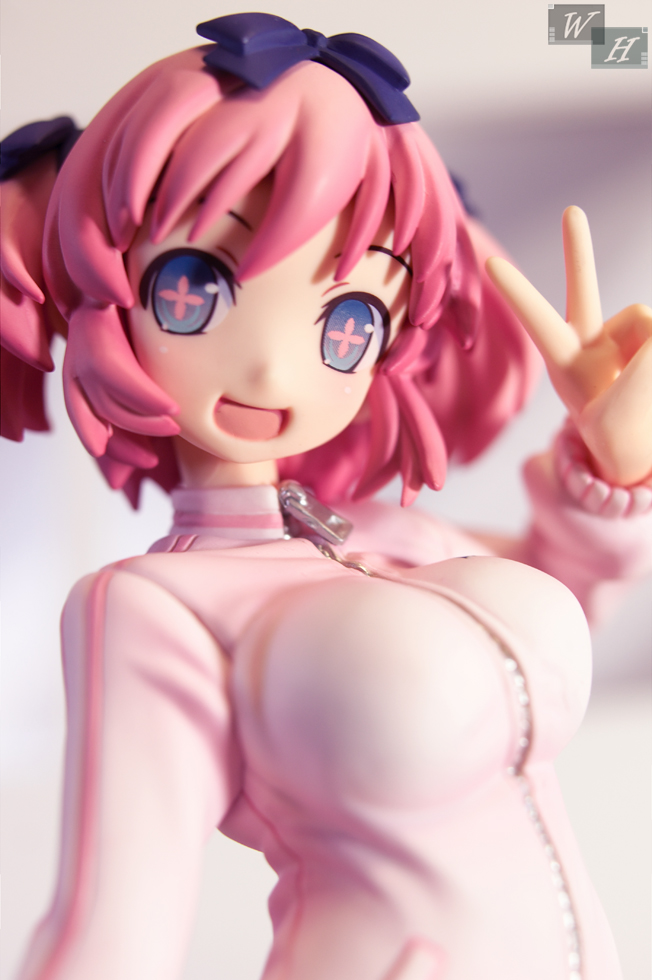 The hair of this figure is very well done, the strands are clean and detailed. She has a cute little pigtails or mini twintails hairstyle decorated with three small blue ribbons. Hibari has a pink haircolor with a gradient from a lighter tone of pink on top to stronger pink at the ends.

A lot of attention has been paid to Hibari’s face, it resembles her look from the manga very well. They eyes are applied in a very clean manner, she actually has normal eyes, but since she’s made in her victory pose, she has these flower like crosses in front of her blue iris. On her cheeks are some adorable blush marks, under her cute stubs nose the figure has a wipe open smile.

The last reviewed figure had a kinda weird open mouth, but the figure in this review has been sculpted with a nicely done open mouth, that portrays the cheerful nature of Hibari’s character. 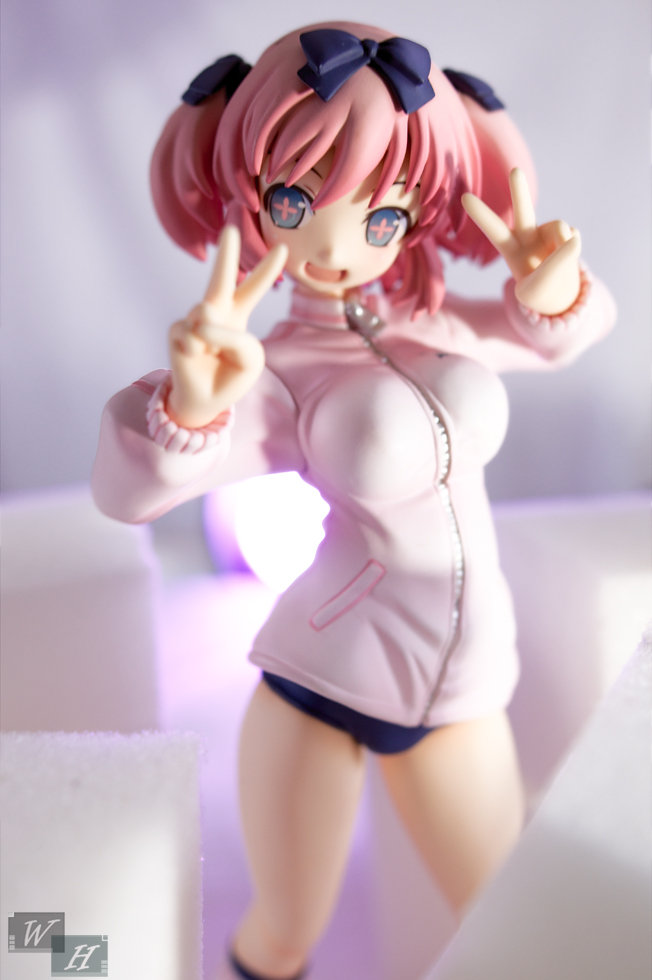 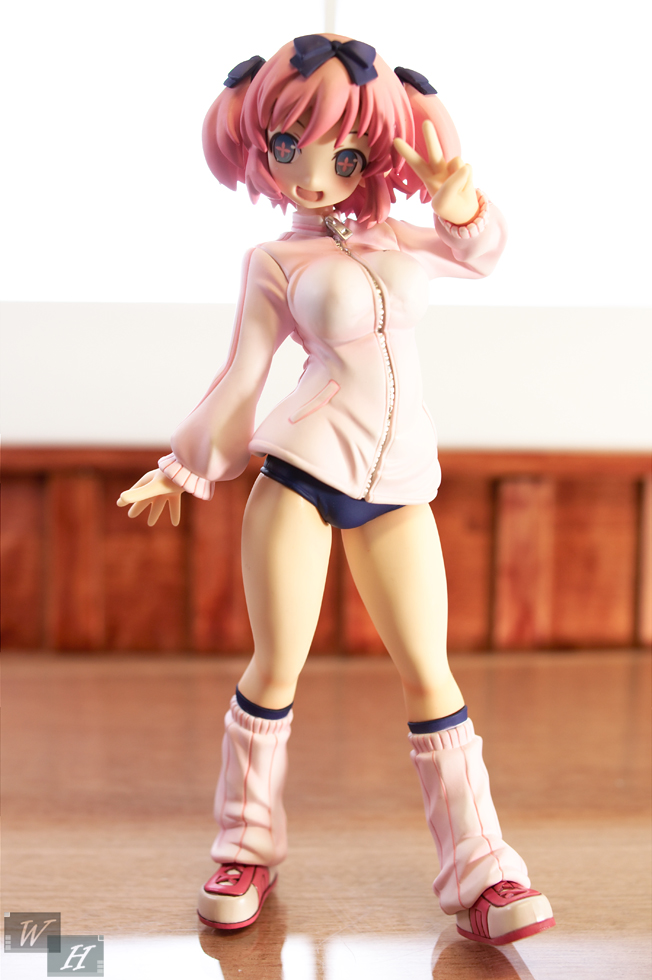 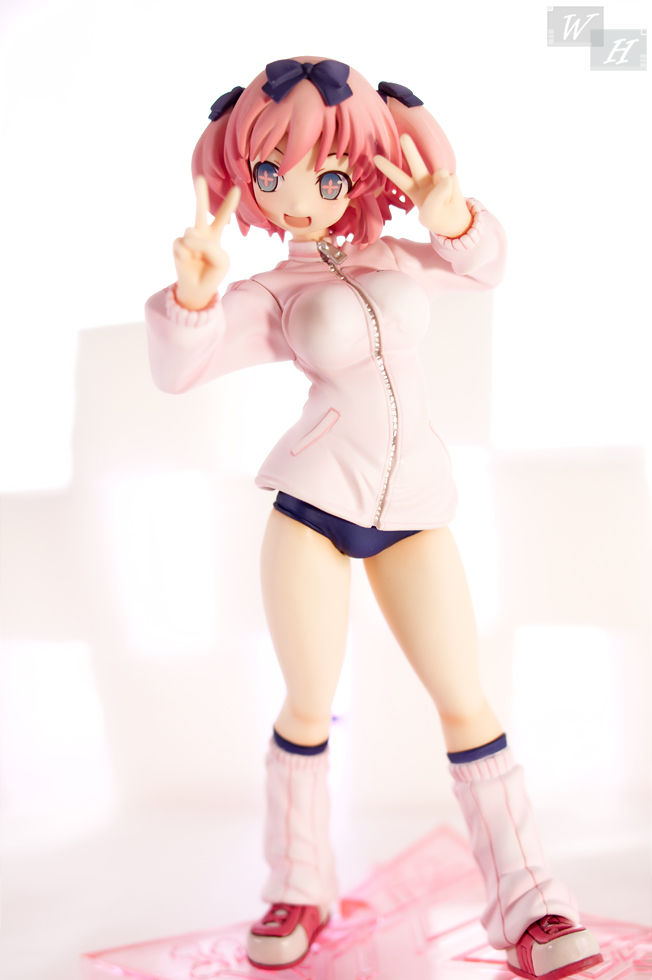 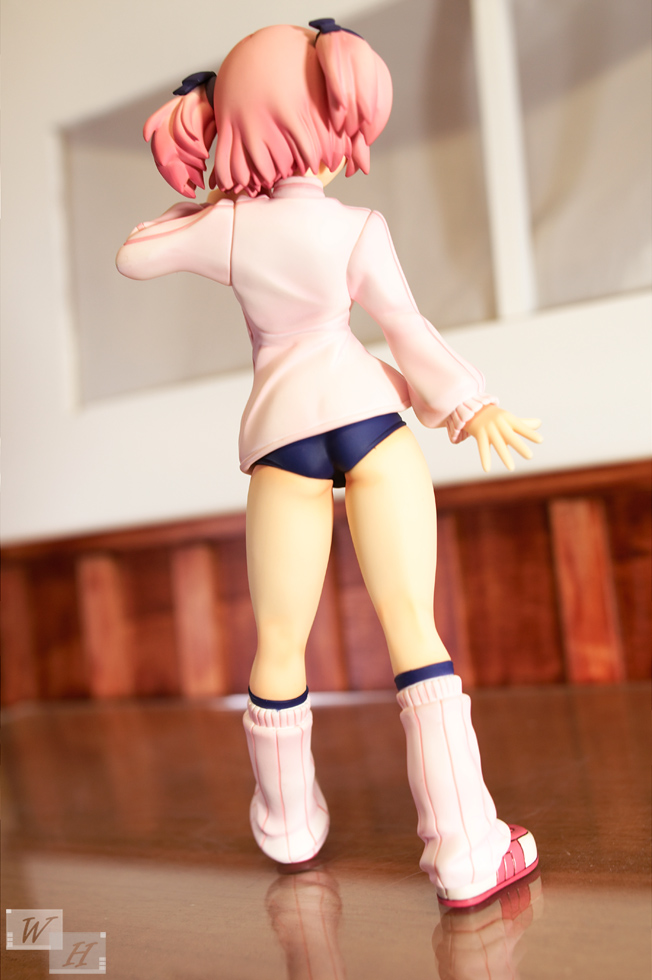 The figure is standing in a rather simple manners, which doesn’t have to be something bad.
As extra feature Hibari comes with a third exchangeable arm, to create the double victory sign pose. The position of the gap is hidden very well, since the arm attaches where the sleeve starts.

Obviously Hibari is a young teenager, but since Senran Kagura always pays attention to the attractive female curves of their characters. Cute Hibari is a short and buxom girl, she has big bouncy boobs  and a sexy waist, the bloomers accentuate her well defined legs very well, while not very long I think that her legs and meaty thighs are attractive, the back of her knee is also sculpted in an appealing way. The subtle applied shading  gives her legs a lifelike appearance. 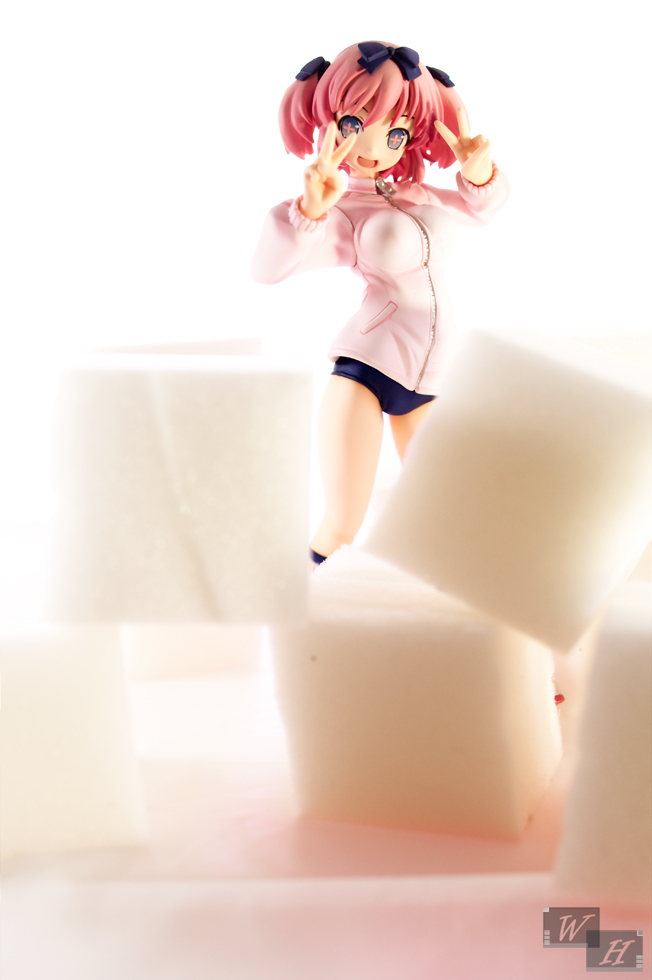 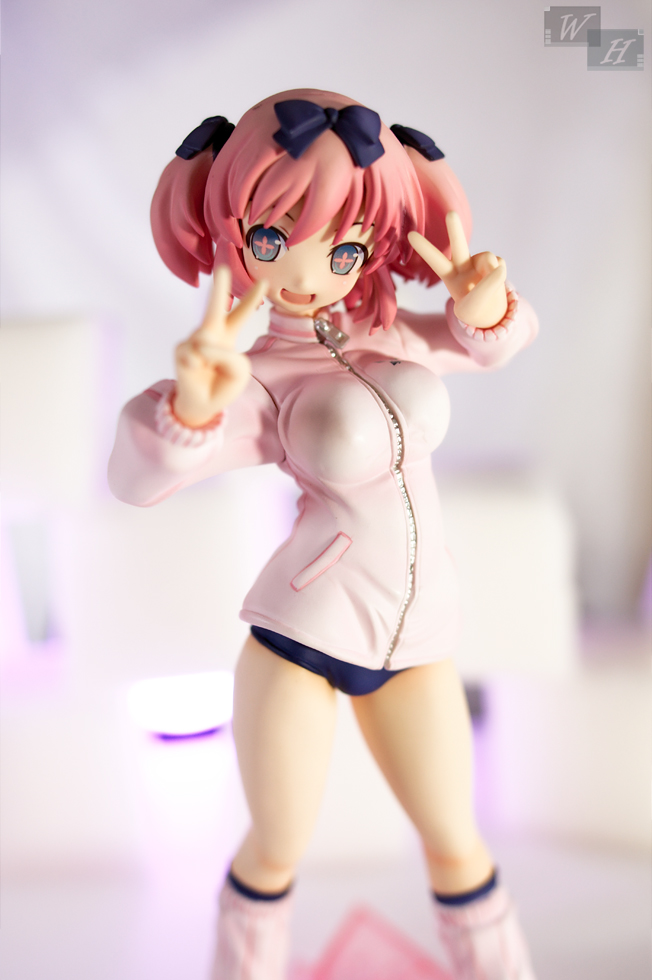 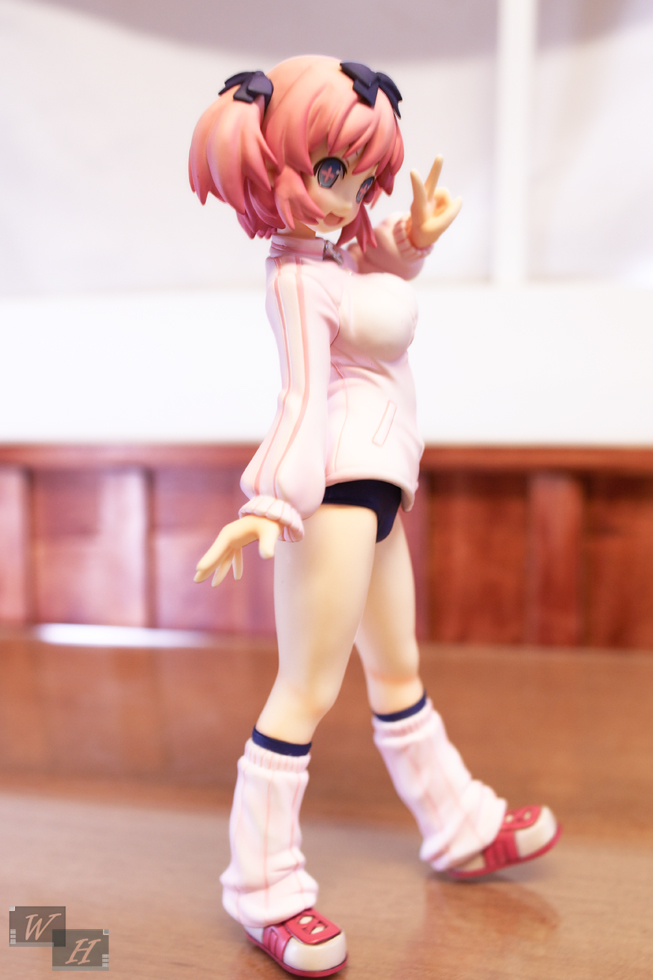 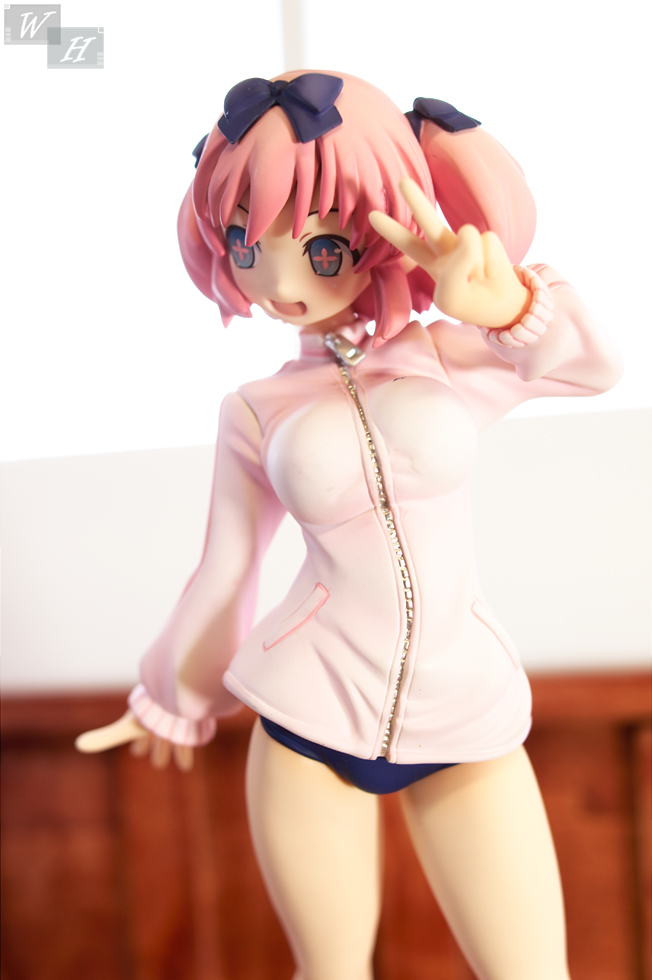 The outfit might be kinda unique, but it’s Hibar’s battle dress, she is wearing a pastel pink, sporty jersey. The sculpting of it is very good, with nicely applied folds and wrinkles. The silver zipper is painted carefully and clean. Underneath Hibari is wearing tight, blue bloomers, well what should I say leg revealing bloomers are always sexy. I also think that her puffy crotch is kinda cute.
Hibari has a cute little butt, but personally I think that her buttocks could have been a bit bigger.

Another nice detail are the striped loose socks, matching the colors of her jersey and bloomers.
I also really like the bulky design of her sneakers with the bold, leather resembling parts of them.

Aside from a few seamlines the sculpting of this figure is done very well.

Hibari can stand without base, but you have to balance her carefully, it’s no option to display her like this for long. She is safer on her clear base.

I was also impressed by the sturdiness of this figure during the no base shootings she fell over several times without taking any damage, one time the whole background fell on her, but again no damage occured. My assistant was so clumsy that day. Well Im no one to talk since I smashed the bulp of my little support lamp after tidying up the shooting ground XD 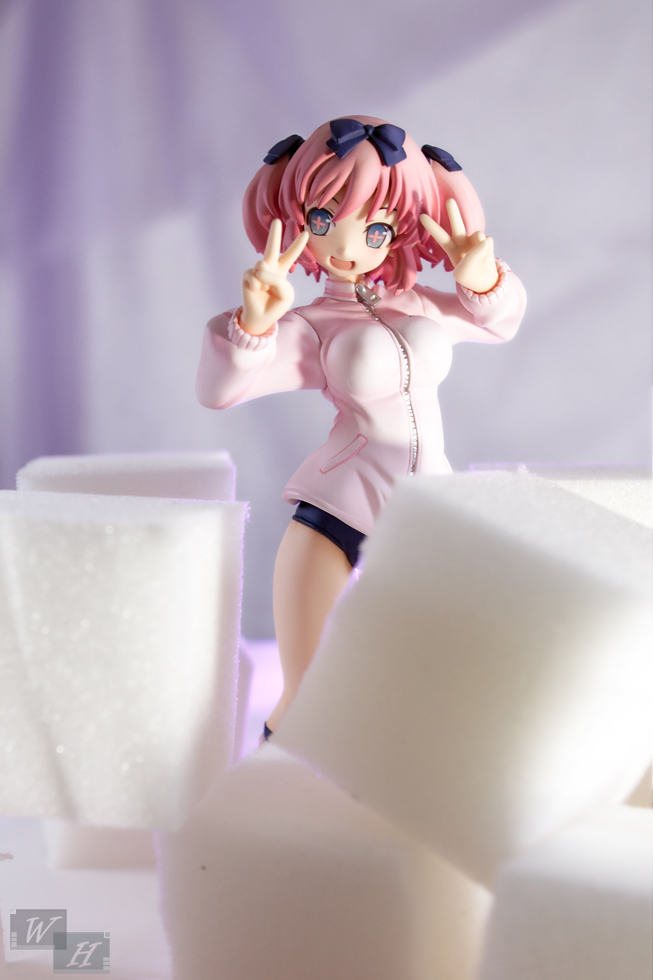 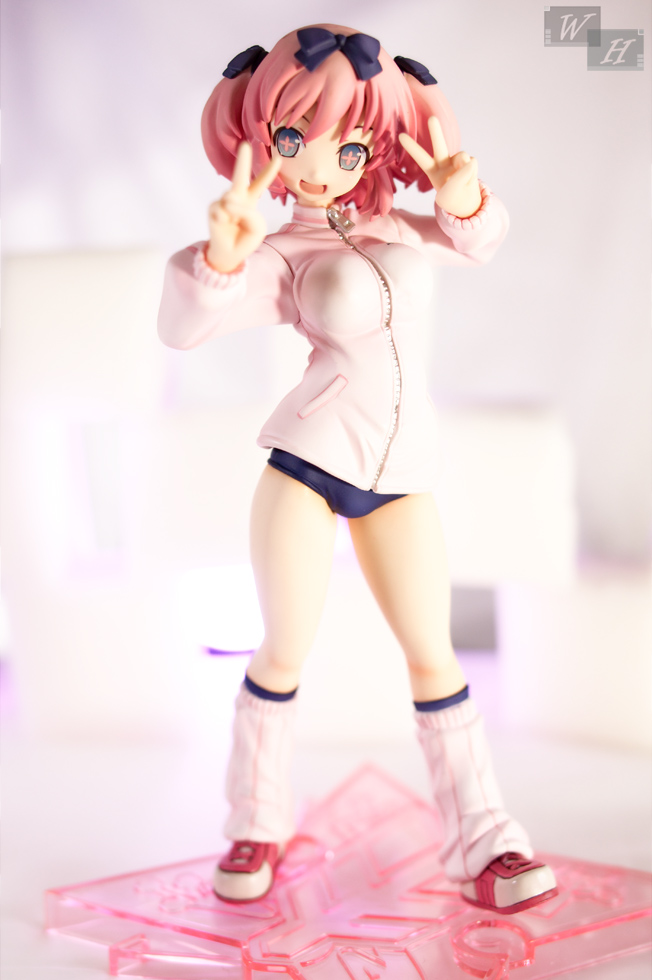 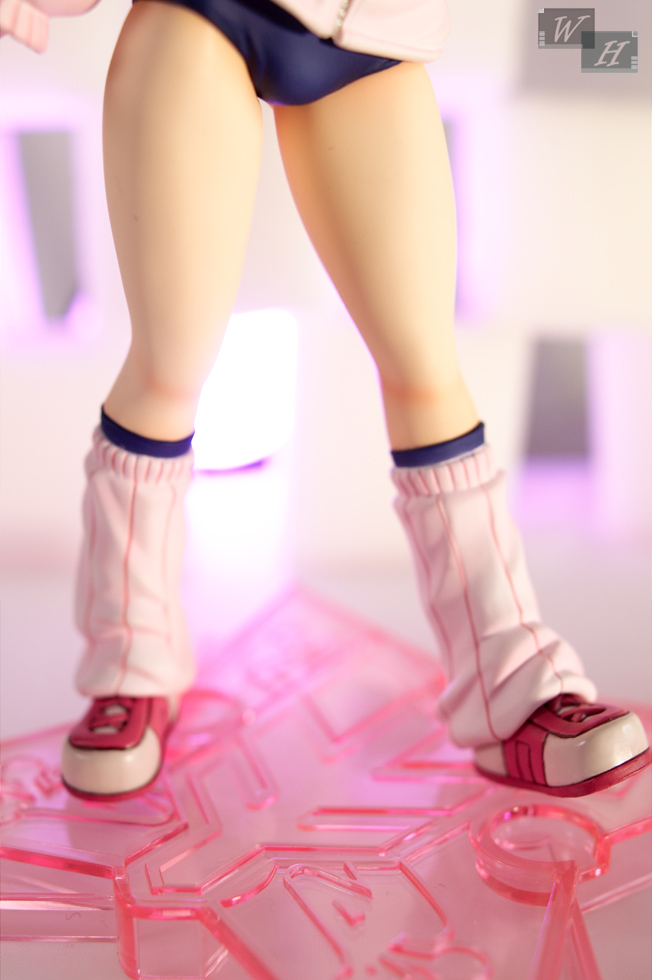 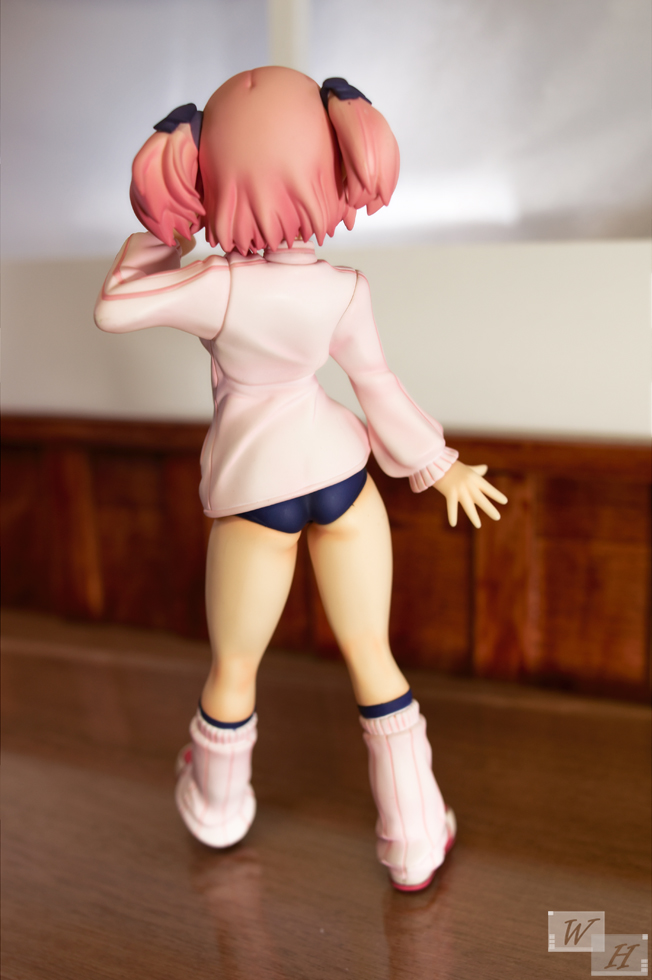 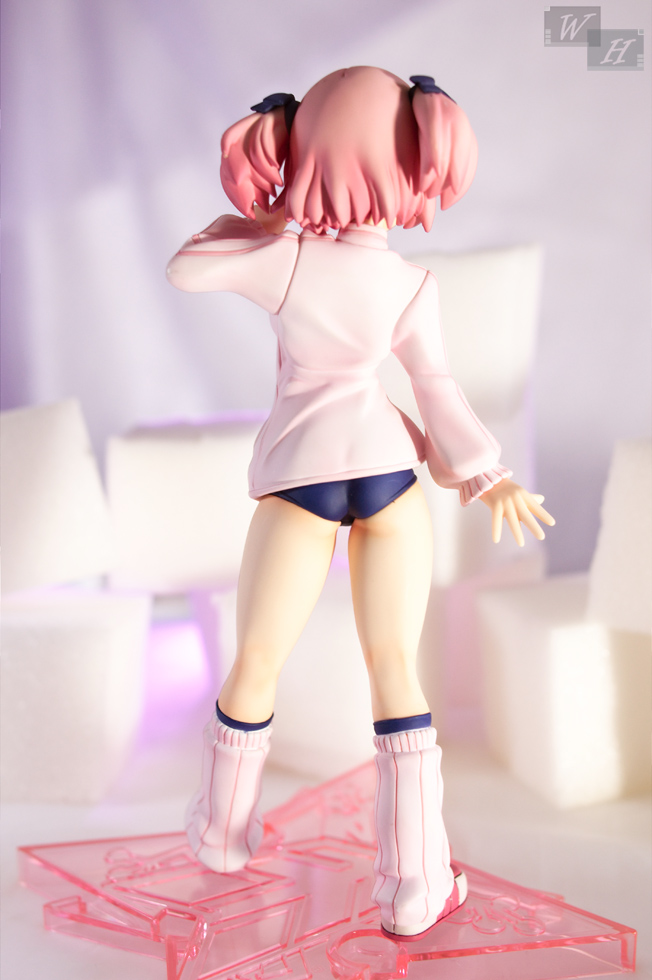 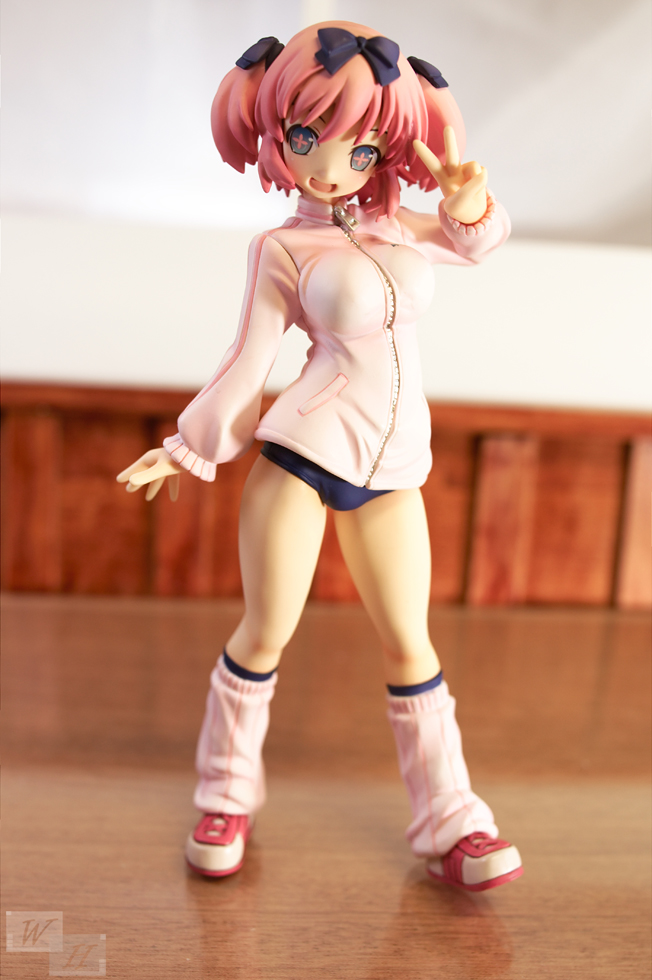 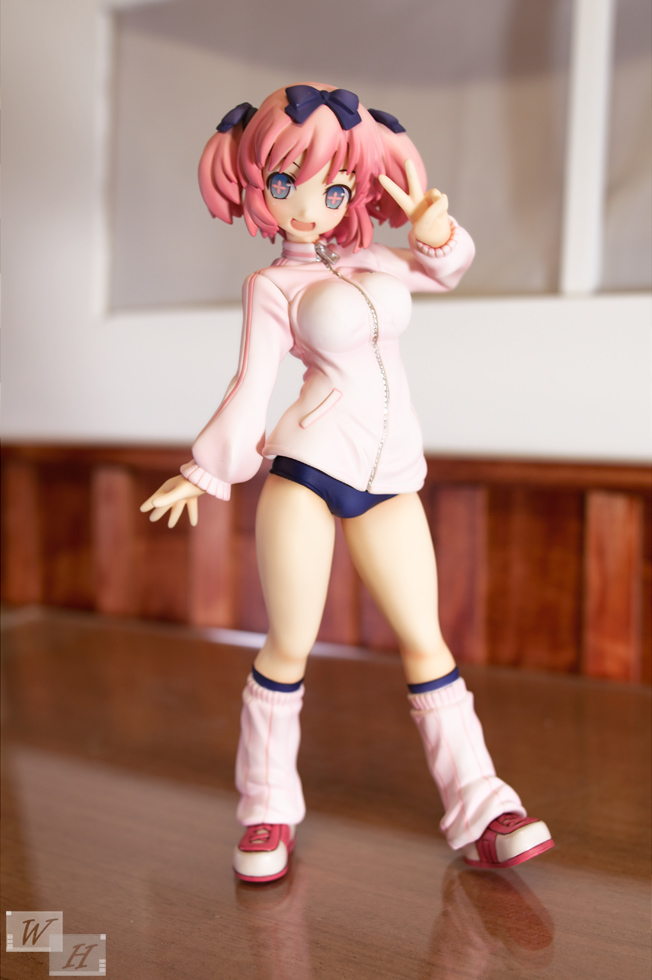 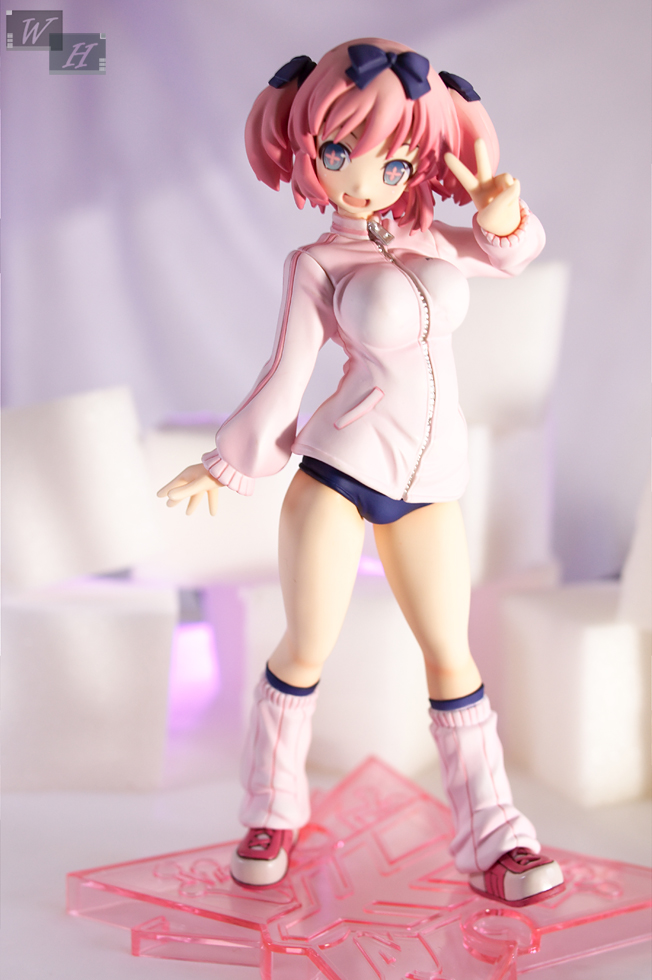 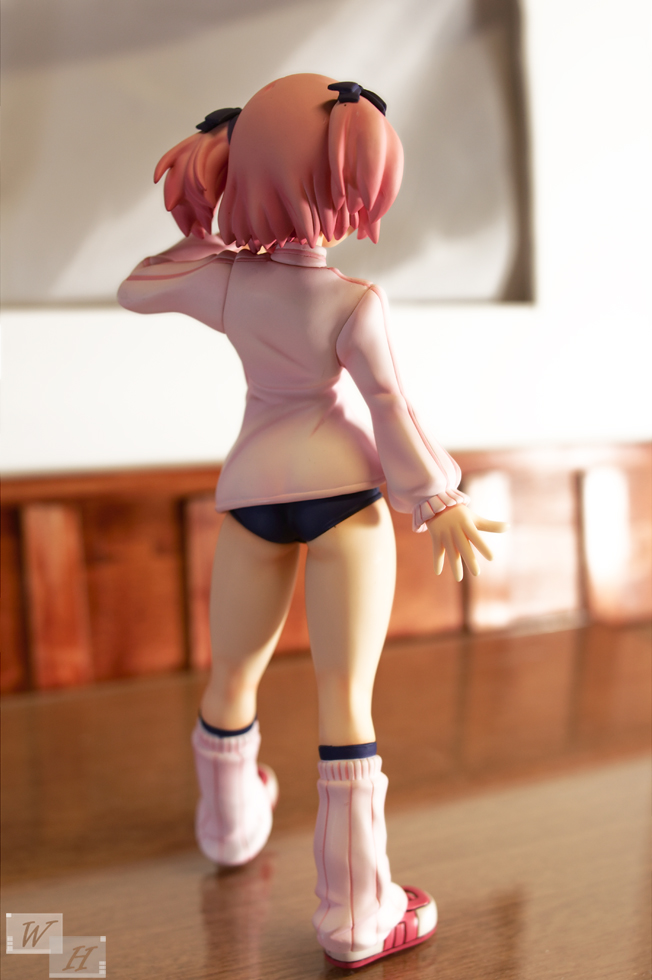 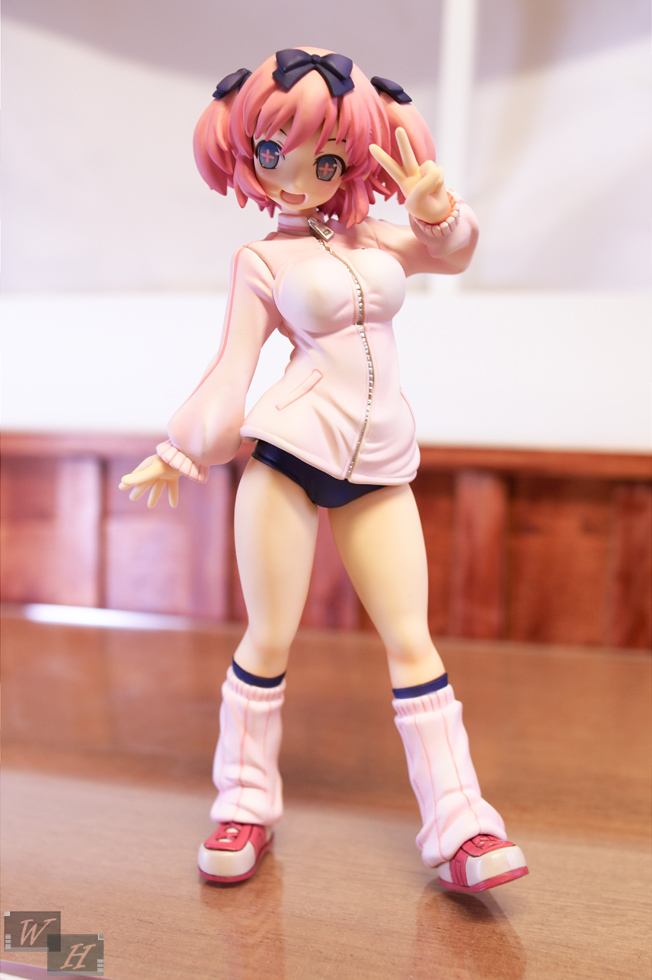 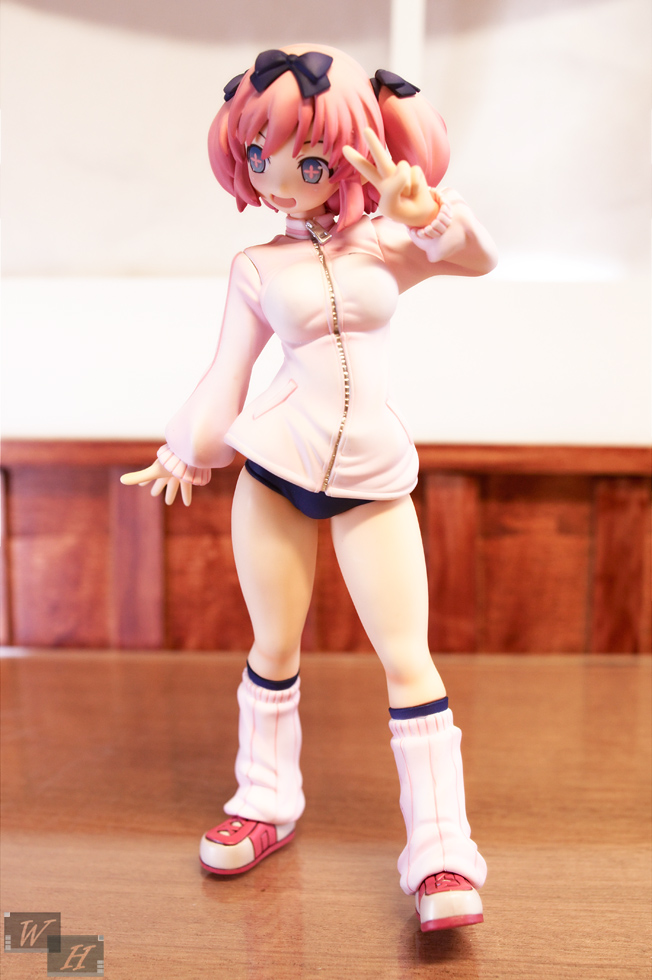 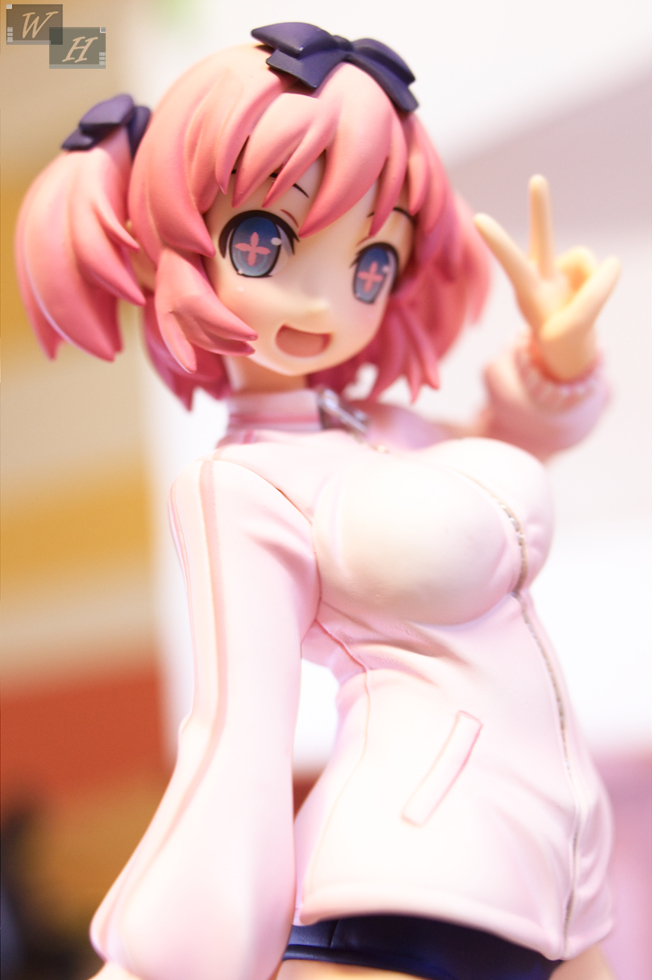 You probably can tell by now I’m totally enchanted by this Hibari figure. I find it remarkable that a young figure manufacturer like Phat Company, that I actually didn’t trust much him the first place, delivered such a lovely product with this Hibari figure. Sculpting and painting of figure and the outfit parts are very good. Also in terms of resembling the character the figure is based on, I’m very pleased with her, I love my Hibari, she is cute, cheerful and sexy.