No, that’s no repost

If you remember my last review about the Fate/Hollow Ataraxia – Saber Maid figure, you’ve learned that I made a little mistake, without paying much attention I ordered the  Saber Maid figure instead of the Saber Maid R, which was sold for nearly the same low price. Before I noticed it, it was too late to cancel and so I ended up with the “wrong” Saber. After I’ve written the review I sold the figure and ordered the R version I initially wanted to get. 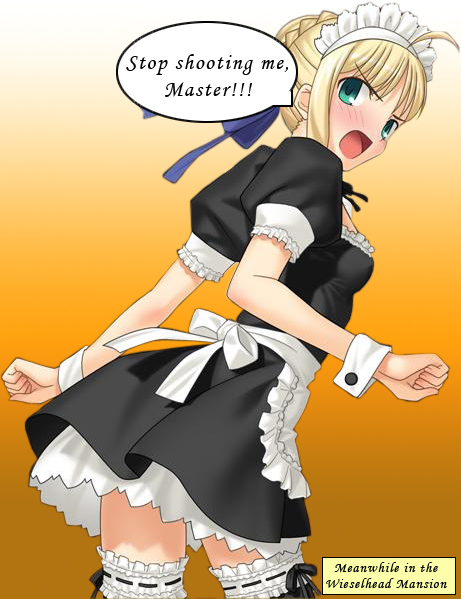 The old Saber is from 2007/2008, the sculptor in charge of it and the R version from 2012 was Kuramoto Imuka, who sculpted a number of nice figures and GK’s from 2004 – 2012).
I don’t know the exact reason why ALTER decided to make a renewed re – release maybe they thought that the previous sculpt wouldn’t be appealing enough, compared to todays standards.

The figurec was manufactured by ALTER. The release date of this Fate/Hollow Ataraxia Saber Maid R figure was in the end of August 2012, the figure is scaled 1/6 and has a height of 26 cm.

I really thought about how to write that review since the Saber Maid R only has a few changes compared to the older version. I don’t want to repeat everything I said in my Fate/Hollow Ataraxia – Saber Maid (non R) review. A direct comparison isn’t possible anymore, since I’ve sold the older Saber Maid a few weeks ago, but I intend to accentuate the few differences between the old and new version of Saber Maid and talk about the appeal of this figure. 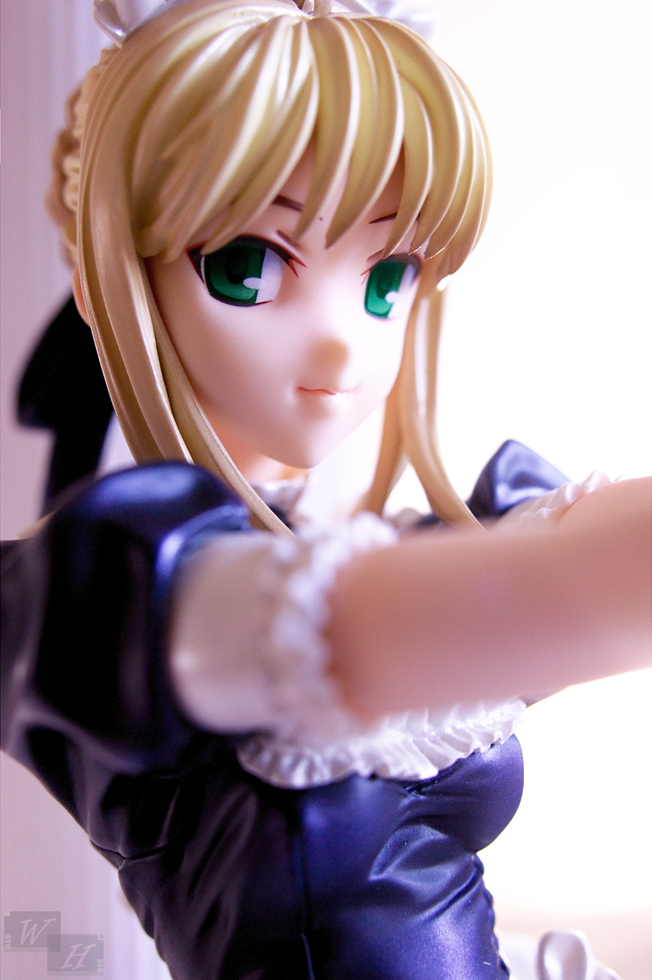 While the sculpting of the hair is nearly 100 percent identical to the previous version, the color changed from a very yellowish tint to more natural, vanilla tone of blonde with darker shading at the tips. What bothered me the most on the previously purchased Saber Maid figure was the face, it rather looked pressed together from two halfes which gave it a strange thin look with a pointed middle part. In my opinion the figure hardly resembled the character of Saber.

The new figure has a  smoother face and a nicer texture now, also her face looks a bit chubbier which helps a lot to make this figure more appealing and Saber-like. The pale skin accentuates the beautiful green eyes of the figure very well. I like her facial her challenging yet playful expression a lot. I prefer Saber as energetic maid over her sad self as king with crushed dreams. 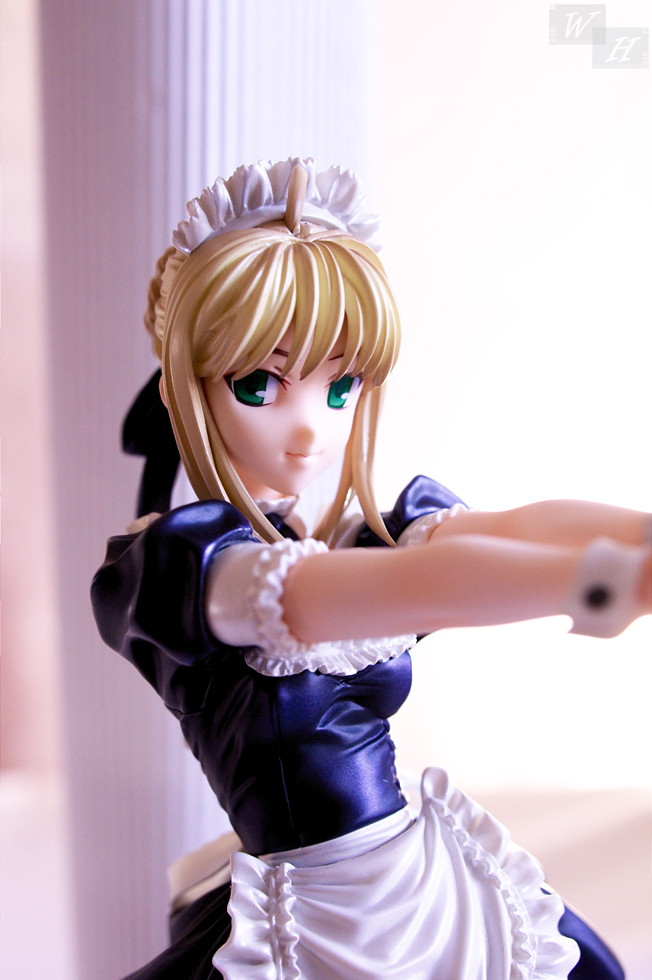 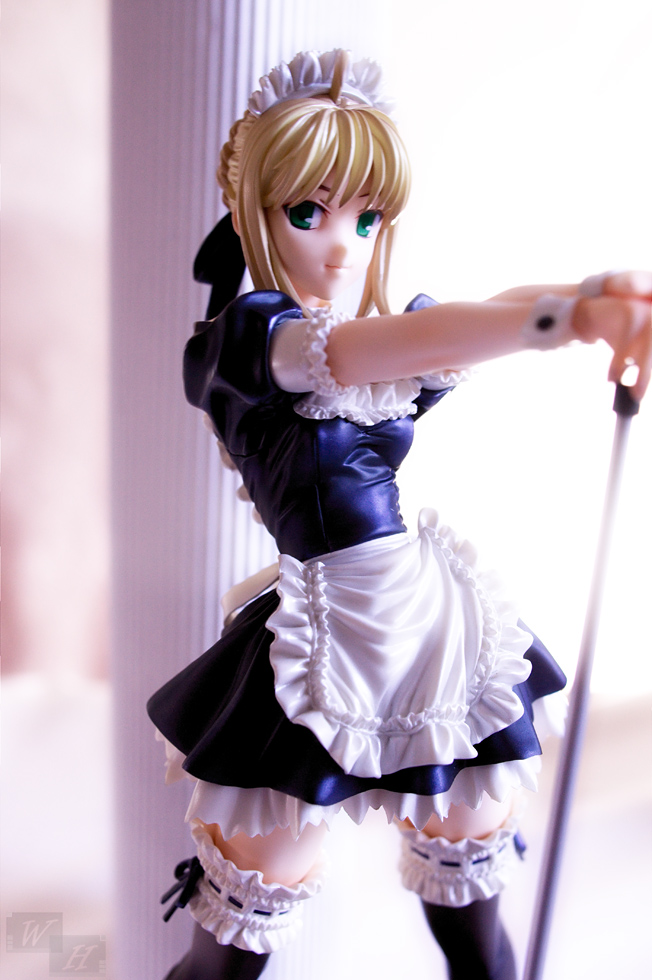 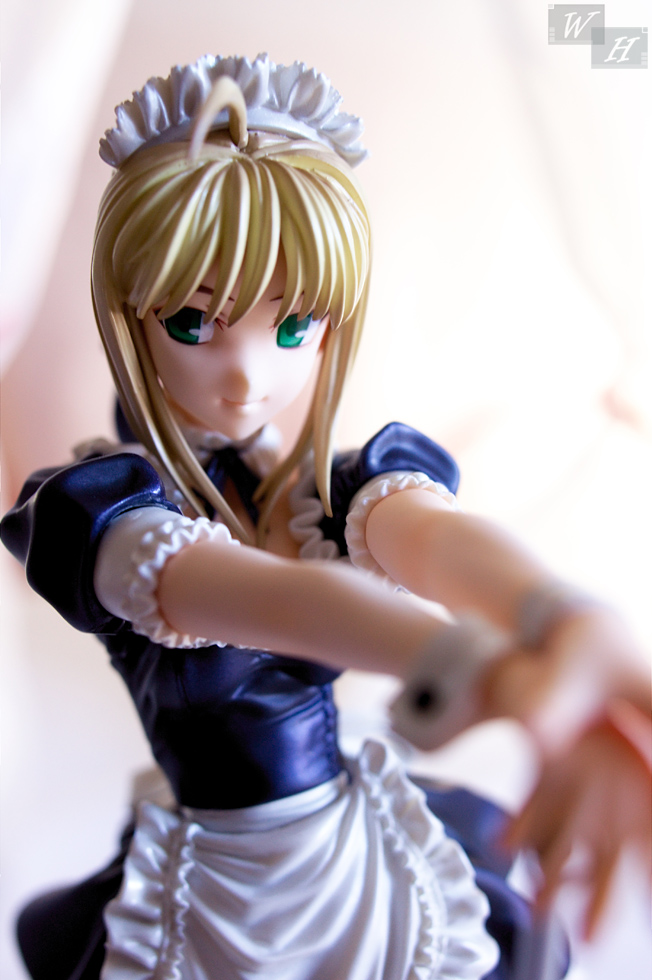 Well, from my impression nothing was changed on the body aside from a pale skintone. Her outfit was also left untouched. Maybe the blue/black dress and her stockings are more shiny, but just to a small degree, if at all. Anyway, like before it’s a lovely designed maid outfit, all the ruffles, frills and ribbons are really cute. The length of her skirt and these black stockings add a lot of sex appeal to the figure. I would love to do some maid role play with Saber (｡◜◡◝｡).

Like the old version Saber, this one also has pretty fancy underwear, out of bad skills at choosing the right aperture I can provide no pantsu shot. Sometimes the important shots turn out as crap ^w^. 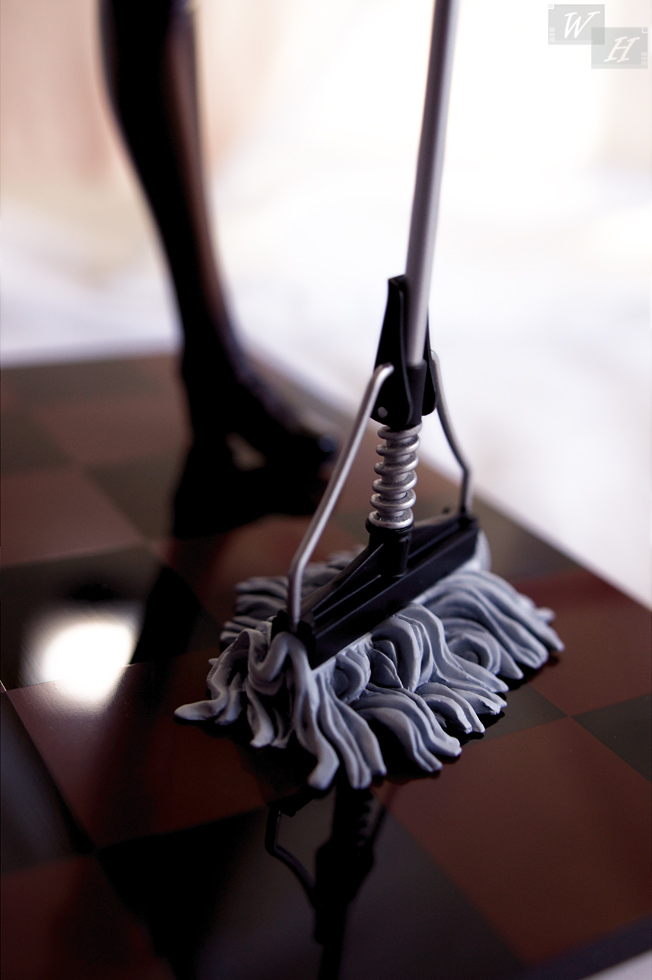 The figure also comes with the interesting looking mop and a chess patterned rectangular base. It has a nice shiny and the red/black pattern of it is very appealing, overall it is more befitting to the theme of this figure. 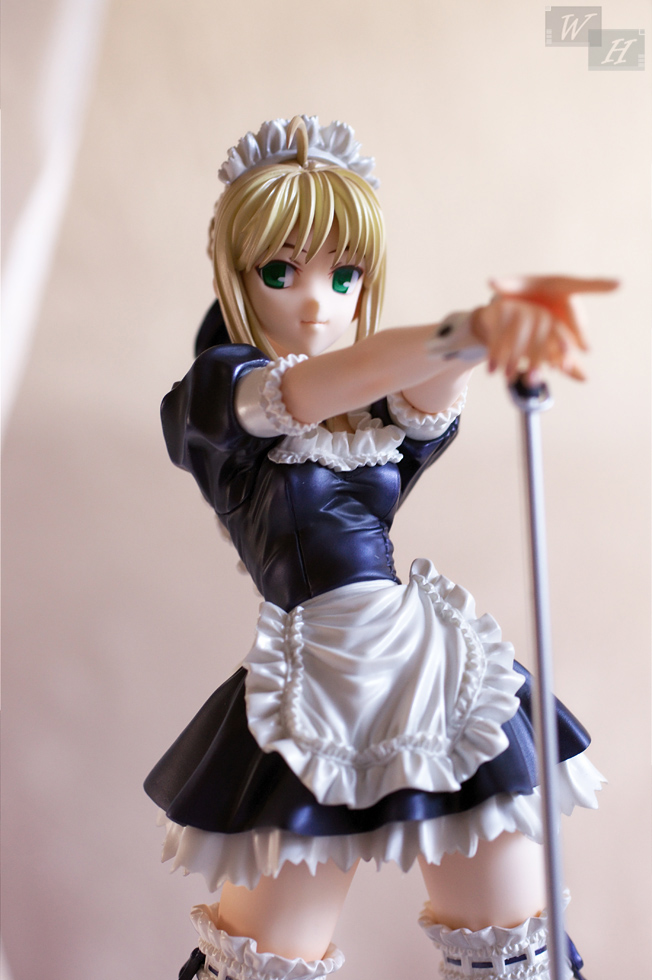 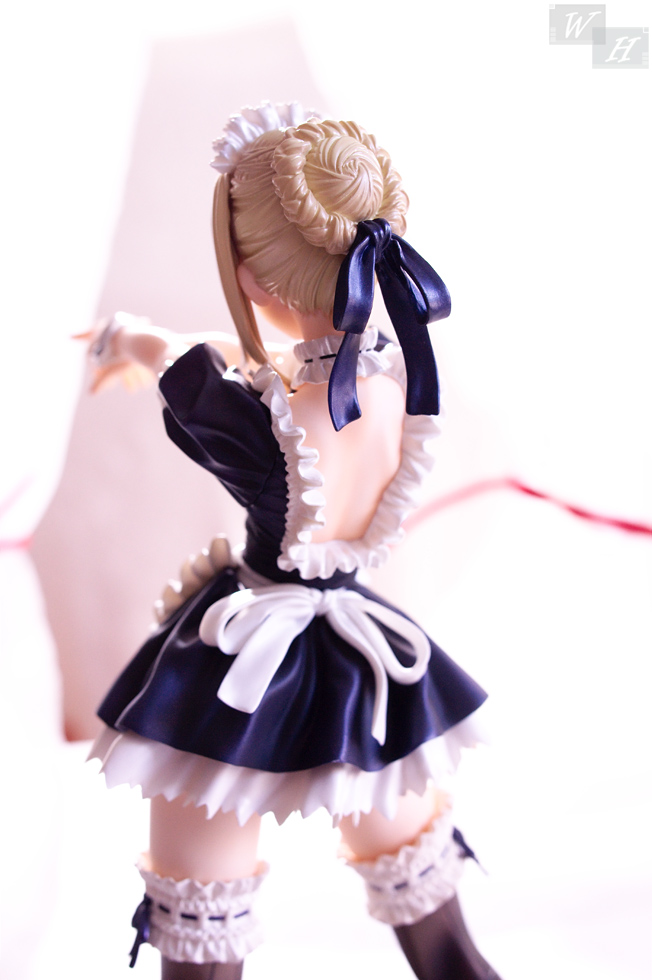 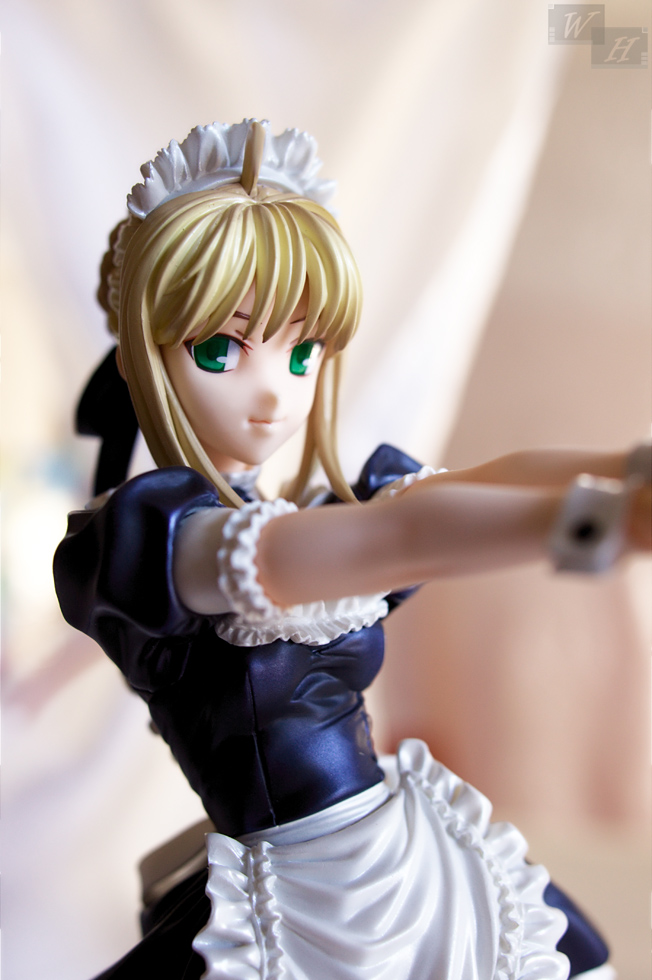 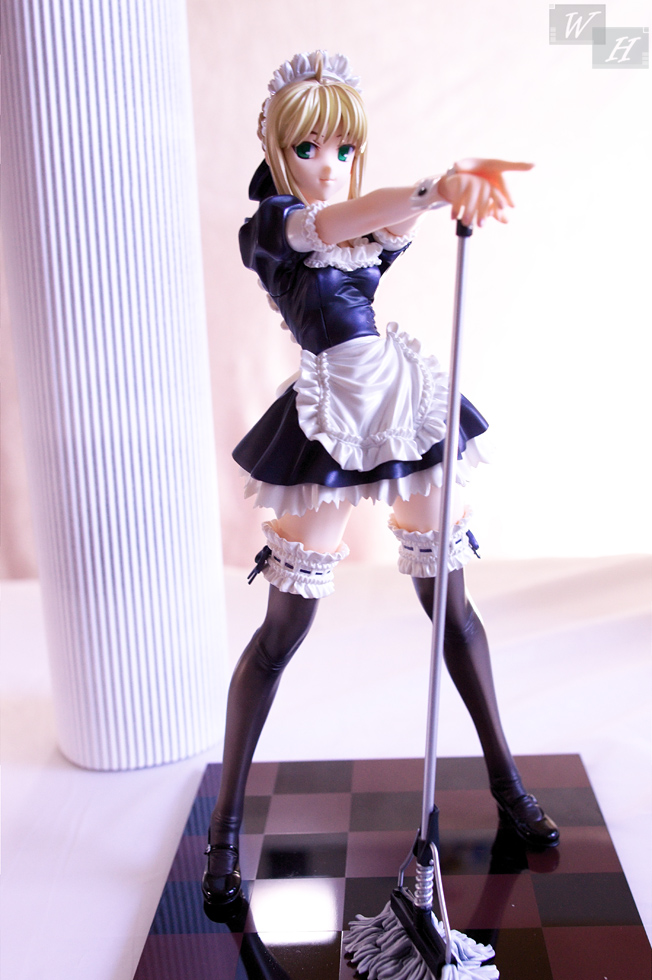 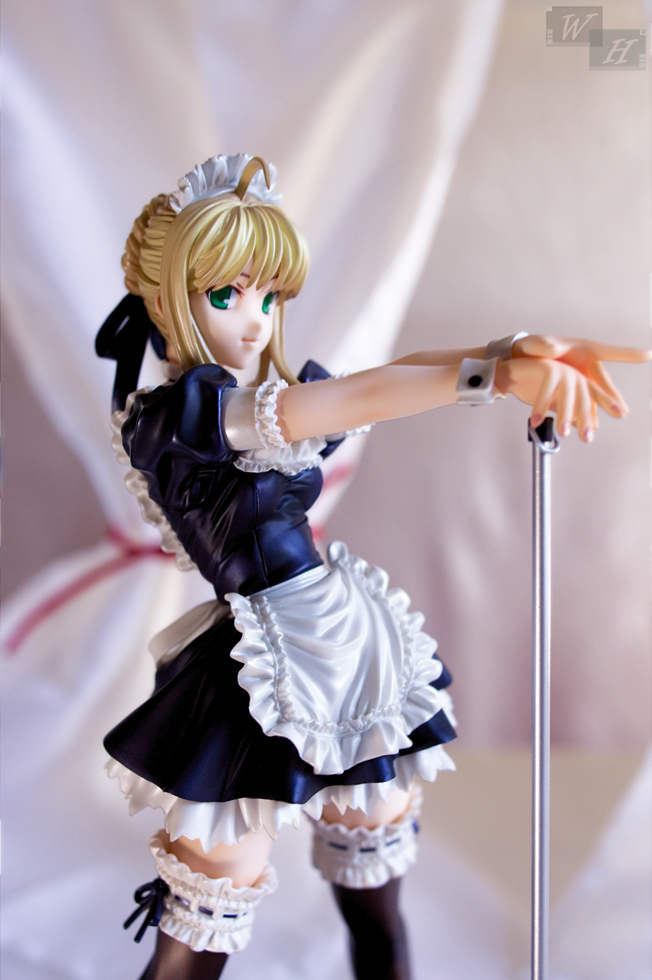 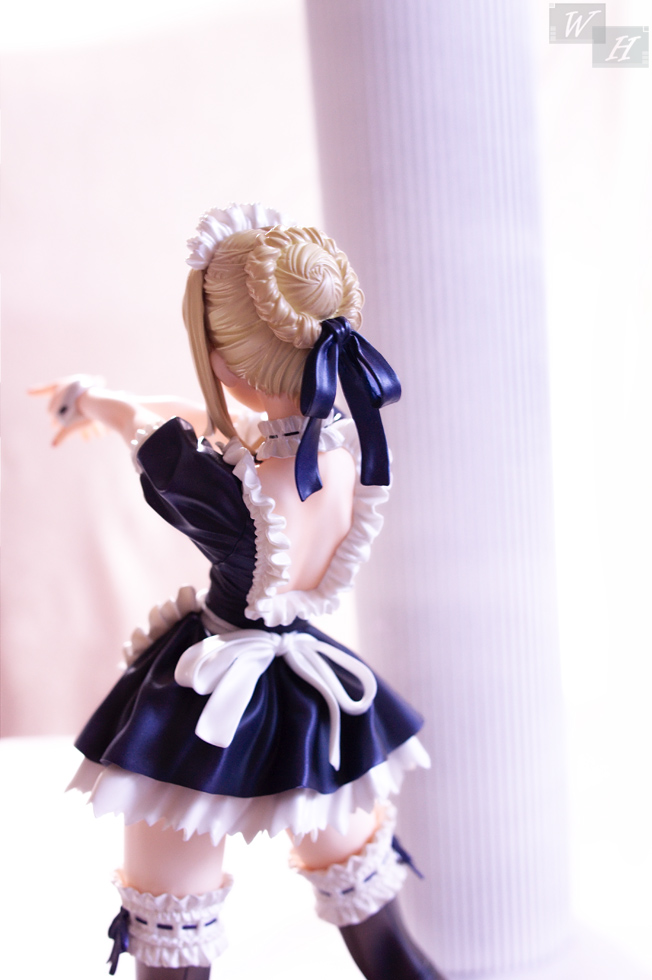 I think it is nice that ALTER wasn’t doing  a simple re – release of the old figure and changed the not so good things about the sculpt and figure. The Hair looks better, the face looks prettier, beautiful and fuller, so it resembles Saber better than before. The brighter skintone also suits the blonde maid very well. Also the chess patterned base is another improvement to the old version. Overall Saber Maid R is very nice big scale maid figure, the classic maid dress is very attractive and it’s nice how she is standing there in a confident manner with a michievous smile.

Even though the re release led to a significant price drop for both figures, Saber Maid and Saber Maid R, what I don’t like in general. But Im happy that I decided to go for this figure, I probably haven’t bought her for the retail price of 7800 Yen. Don’t get me wrong, this figure would have been worth the price, but it wasn’t a planned purchase and Im not a real fan of Saber. 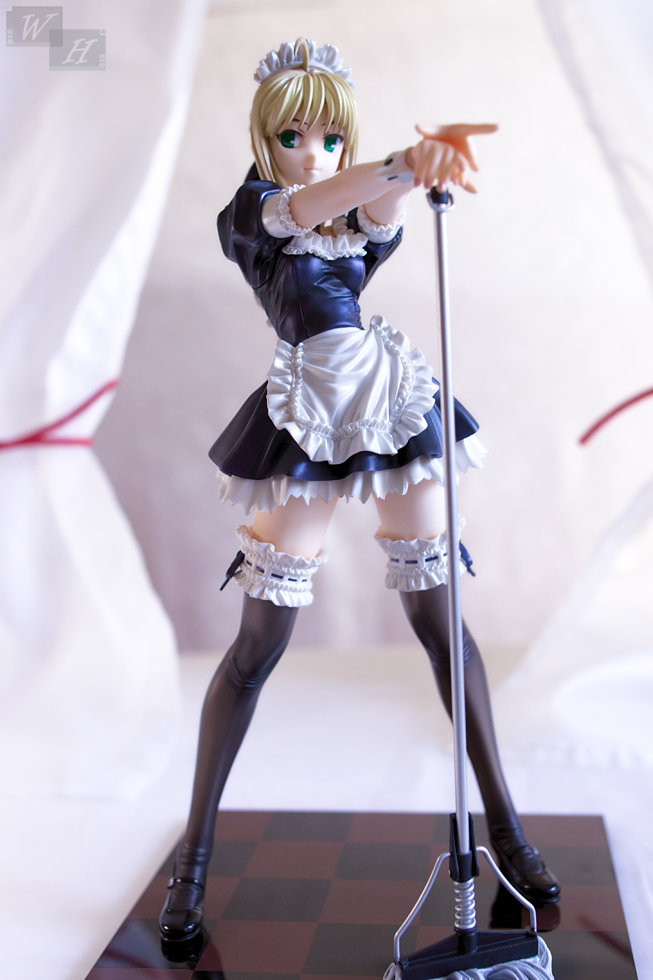 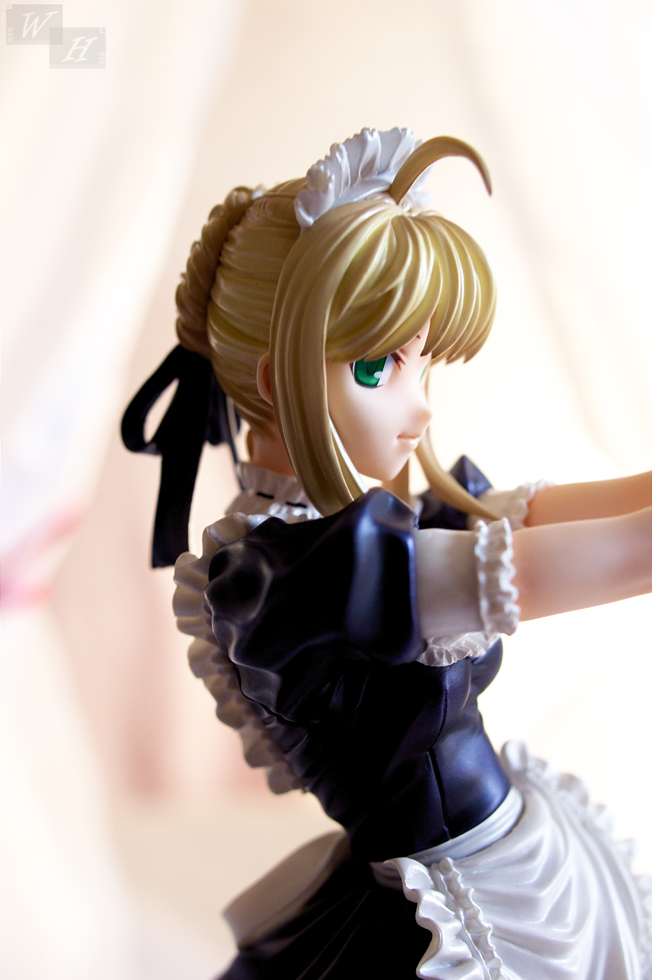 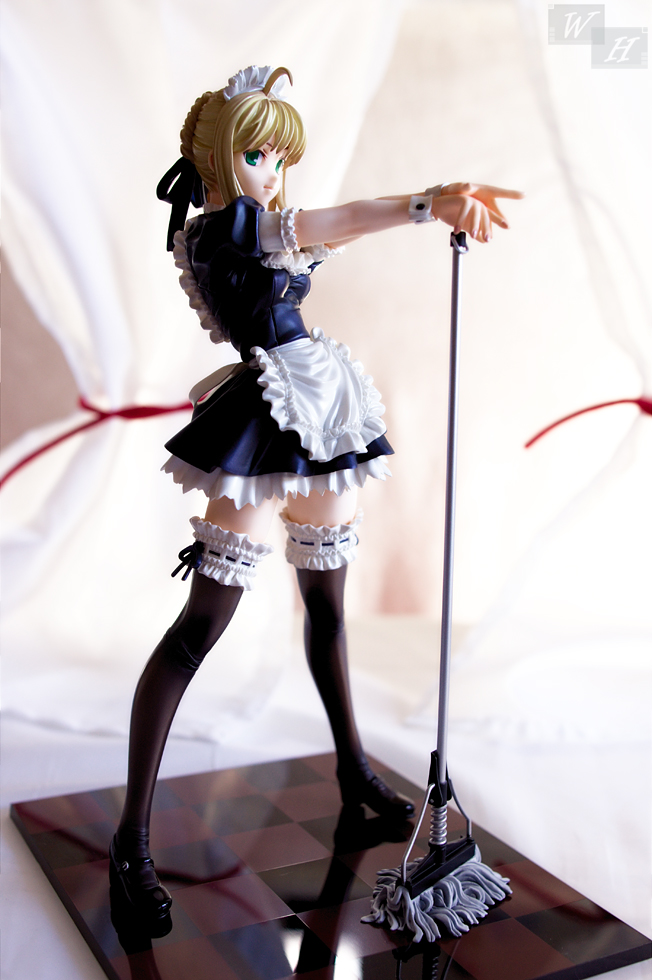 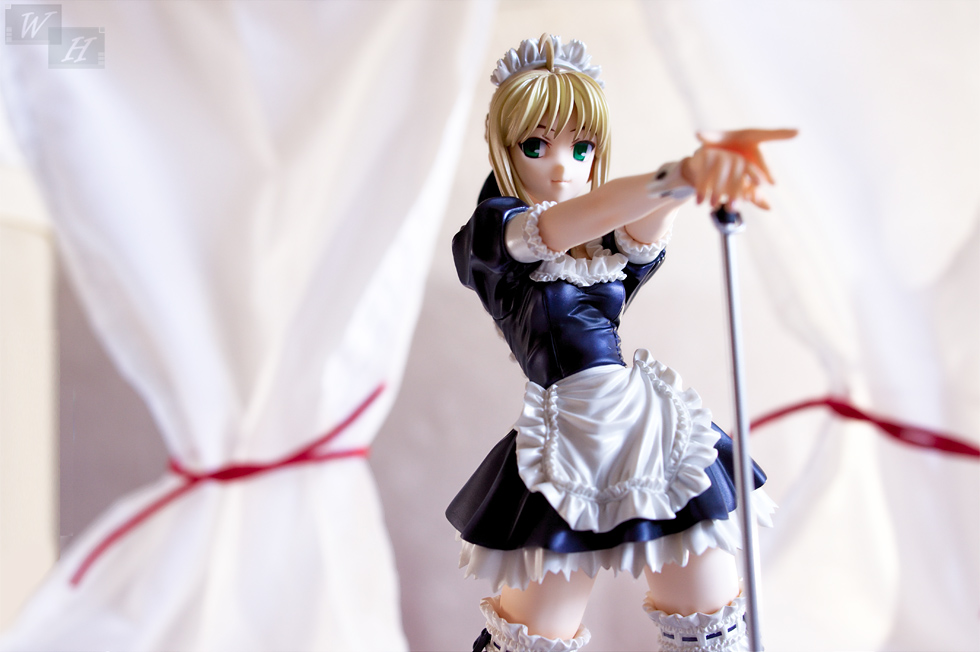 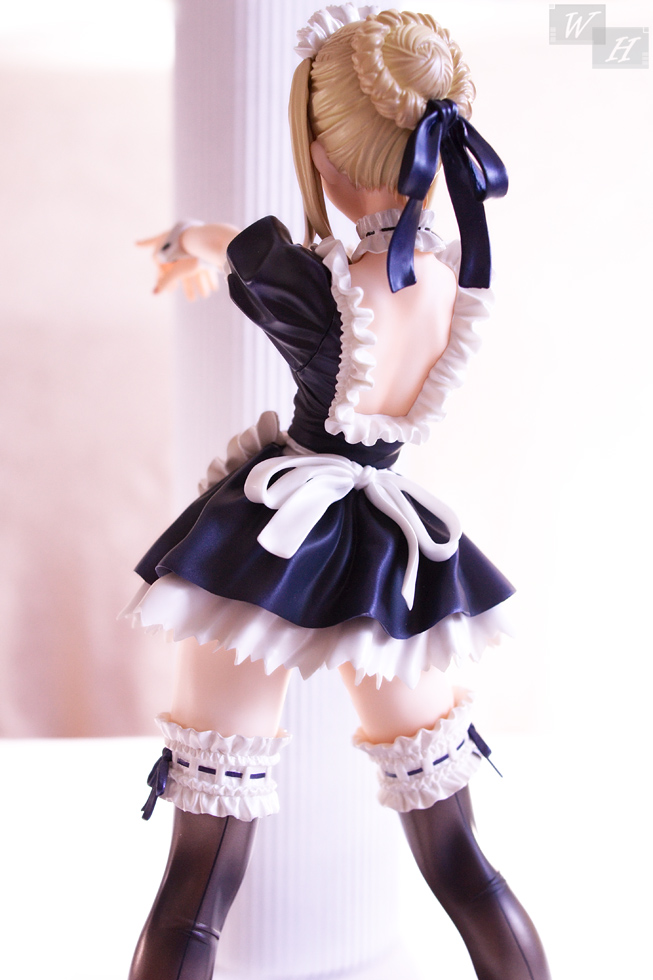 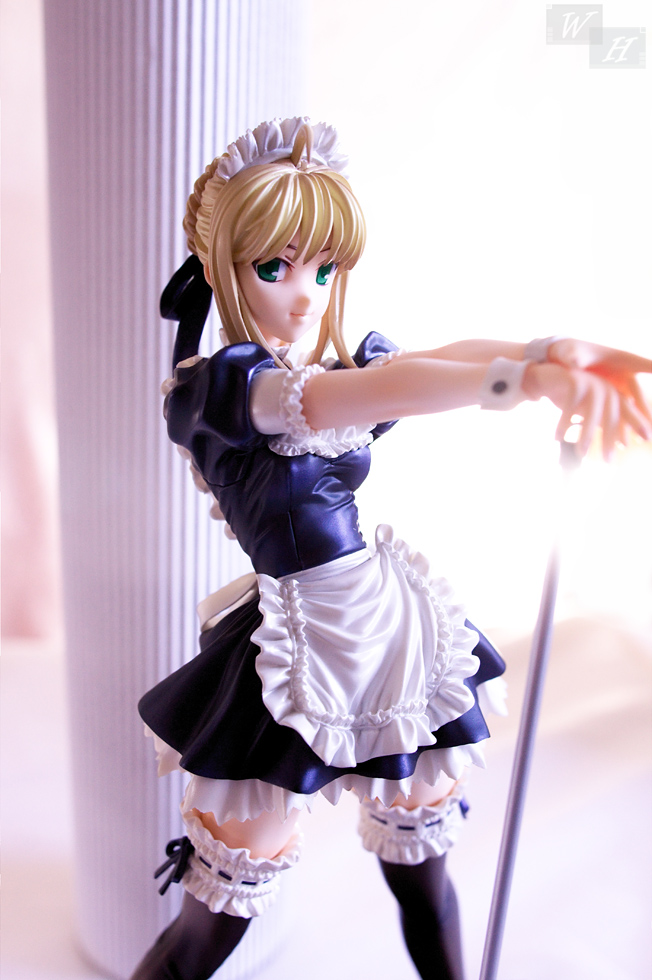 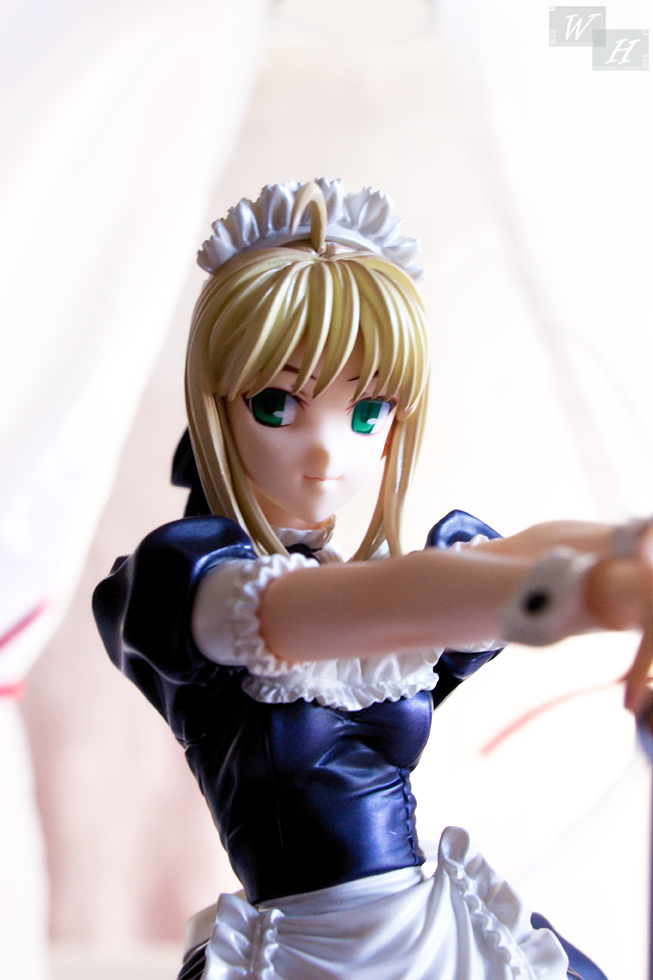 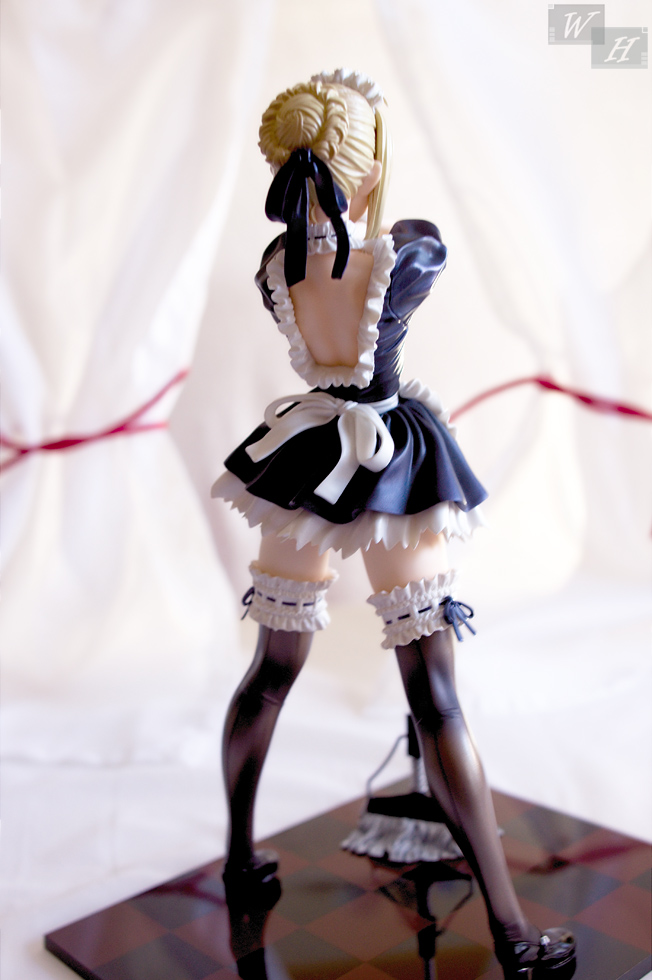