Today I will review a recently released figure. On January 15th 2012 I ordered this exclusive Nagisa from the Phantasy Star Portable 2 Infinity Game for 9800 Yen, it took nearly a year until Volks announced a fixed release date and then the figure was released close afterwards.

The figure was manufactured by Volks as part of their exclusive Moekore Plus line. This figure of Nagisa is scaled 1/8 with a height of 24 cm. She is that tall that you could think that she is actually a 1/7 scaled figure, but considering the age of her character in the game it actually appears reasonable that Nagisa is taller than a figures which are based on younger characters.

The origin of the character is the game Phantasy Star Portable 2 Infinity, which I’ve actually never played before, but it looks interesting and I like the nice intro song quite a bit.

Nagisa the new heroine of this game, she is 18 years old. Her kind is called Duman, a slightly altered human. As Duman Nagisa  has abnormal physical strength that allows her to carry the huge weapon of hers. She is descriped as a polite person, who lacks a bit common sense. 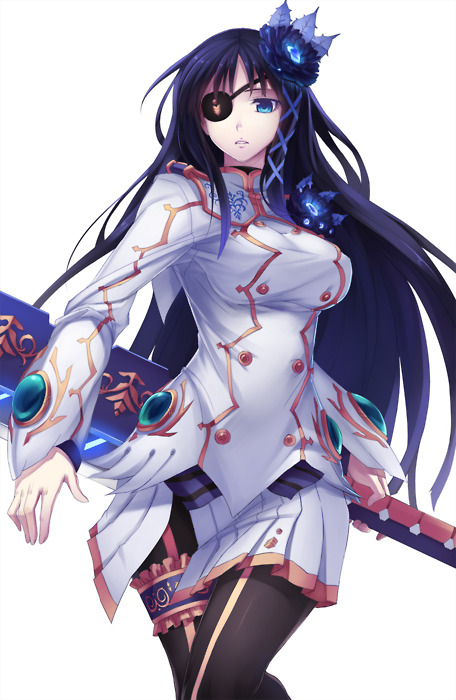 Nagisa has nice black hair, with detailed long strands. I like the flow of it, it seems like her hair is grazed by the wind. The bangs have shorter strands, on the right sight of the bangs Nagisa is wearing some decoration, three leaves and transparent dark blue flowers that look like roses, further below she is wearing a broader strand in a cross tied fashion. If there is one thing I don’t like about her hair, it’s the stub texturw of the hair, a silky shine would have been a lot nicer.

The face of her looks a bit more grown up than on other figures, the facial details of her are very well done overall. The skintone is pale and the cheeks have a cute rosy tone. One of her green eyes is hidden by an eyepatch, it’s no injury btw. Nagisa’s mouth has a nice gloss effect on the lips. The face expression gives Nagisa a serious, nearly fierce look, but she is still very pretty. 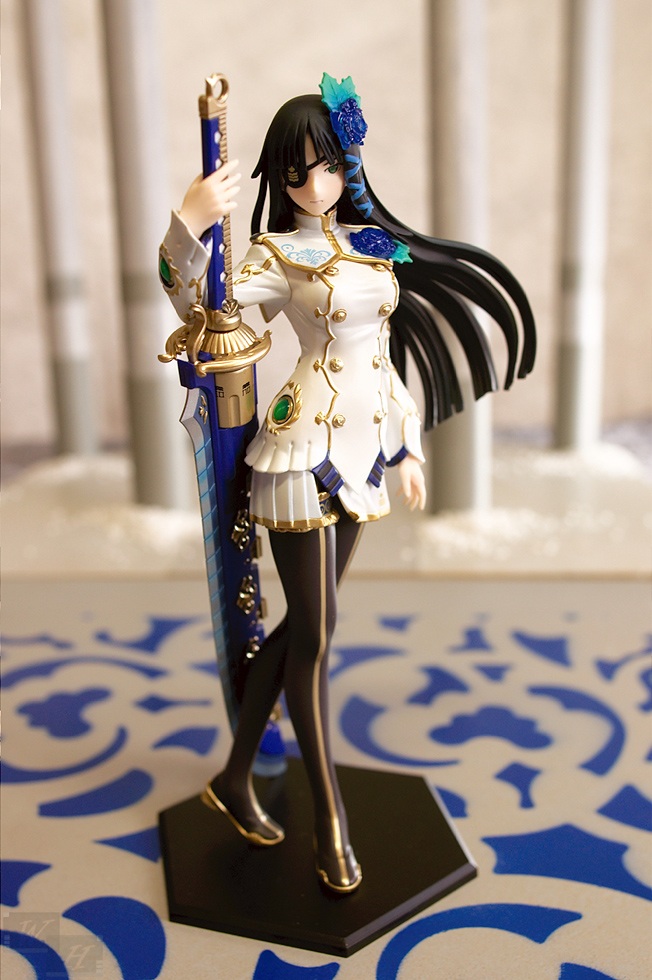 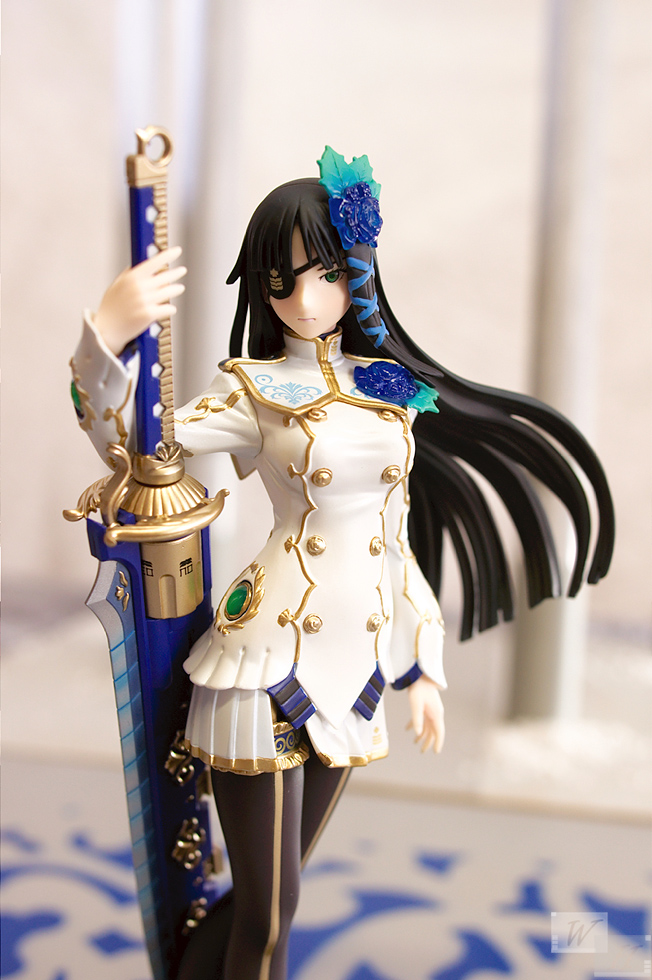 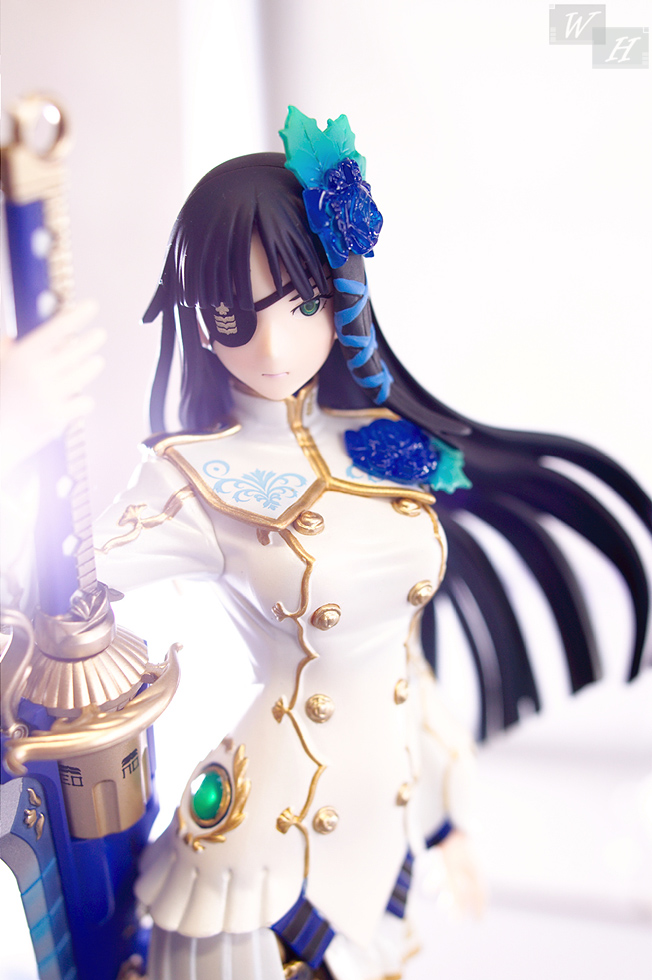 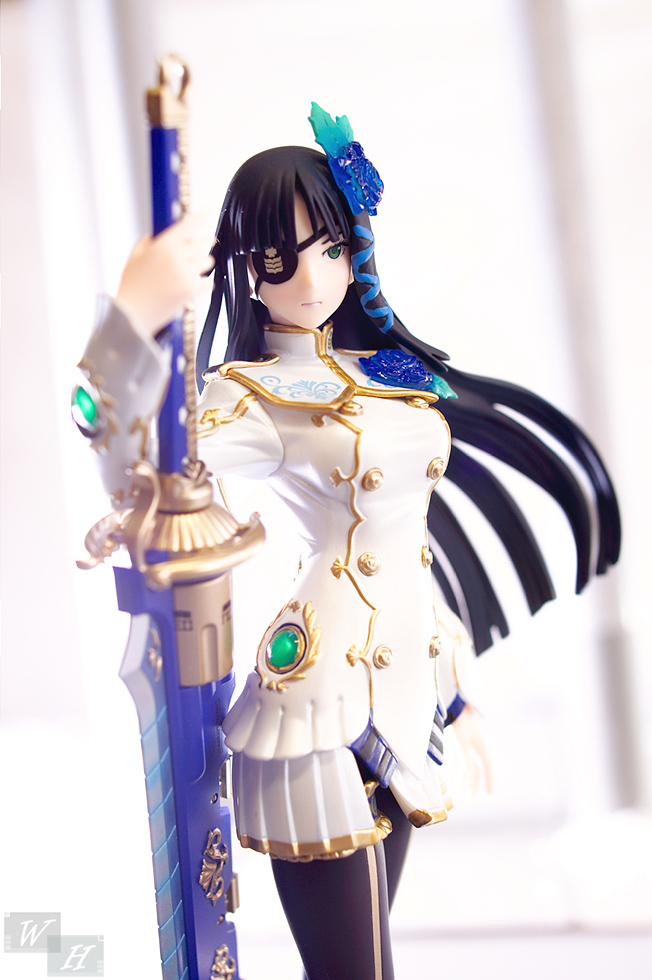 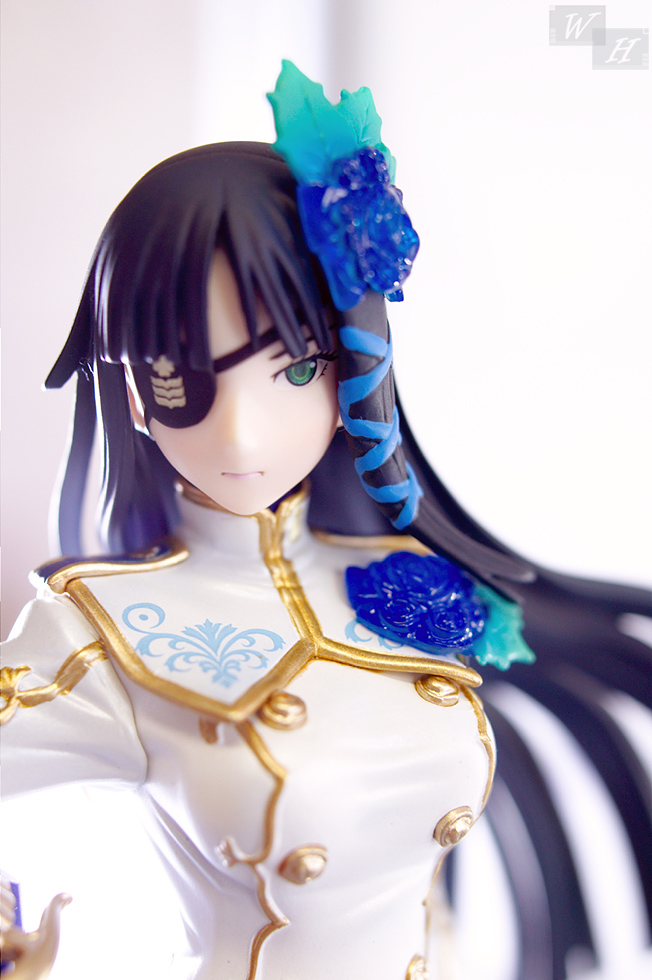 The figure has a buttoned-up design, in contrast to other figures of mine, but I fell in love with her navy commander like uniform on first sight. I always watched this show J.A.G (Judge Advocate General), as it was airing and I liked the white uniforms a lot. I feel a bit reminded of it as I saw Nagisa. Well, her outfit is a bit different though, it consist of a long sleeved jacket, a white miniskirt and long boots. The jacket has a pearl white coat and the dark long boots have a nice shine. What I really like are the inplemented green gems at each side of her arms and hips.

All the shiny golden applications on her outfit give her a lot of elegance.  The strict appearance of her is areated by some folds and wrinkles at her arms, bust, butt and skirt. In contrast to the chastely outfit a little sexy detail was added where the skirt reveals the  garter at her thighs. 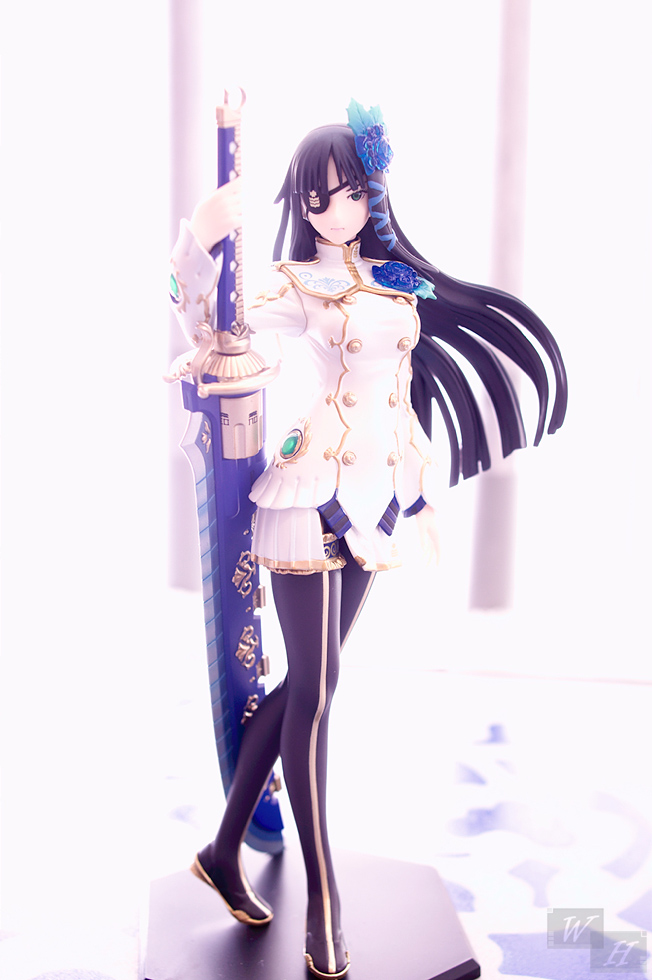 On first look Nagisa has a kind of simple pose, but nevertheless it is a quite expressive pose this figure has. There is more room for specualation, but to me it seems like she is walking past her beaten enemies, I really like posing of her limbs and body, the way she is hugging her big sword or the pose of her legs, on close view the pose is more complex than it seems. 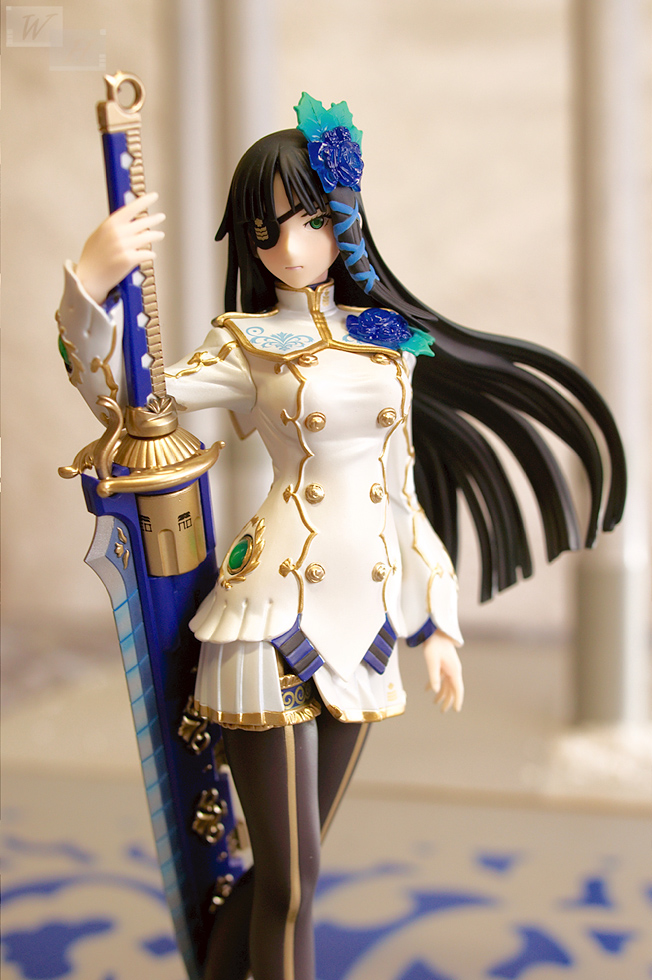 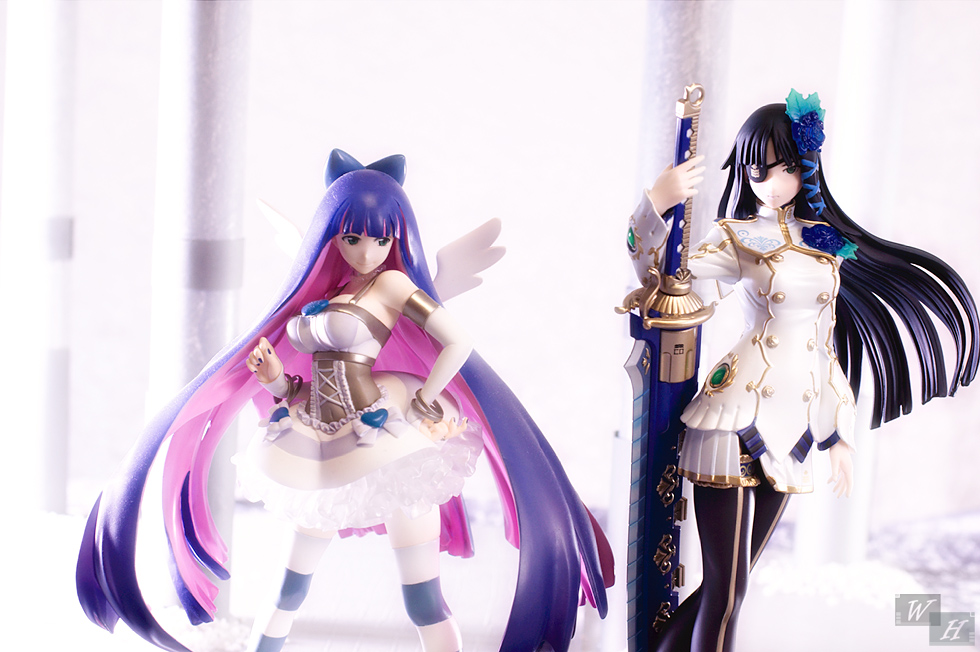 A little size comparison – Stocking is already one of the bigger 1/8 scaled figures out there, but Nagis still is a few centimeters taller than her, even though the proportions of both figures match closely. 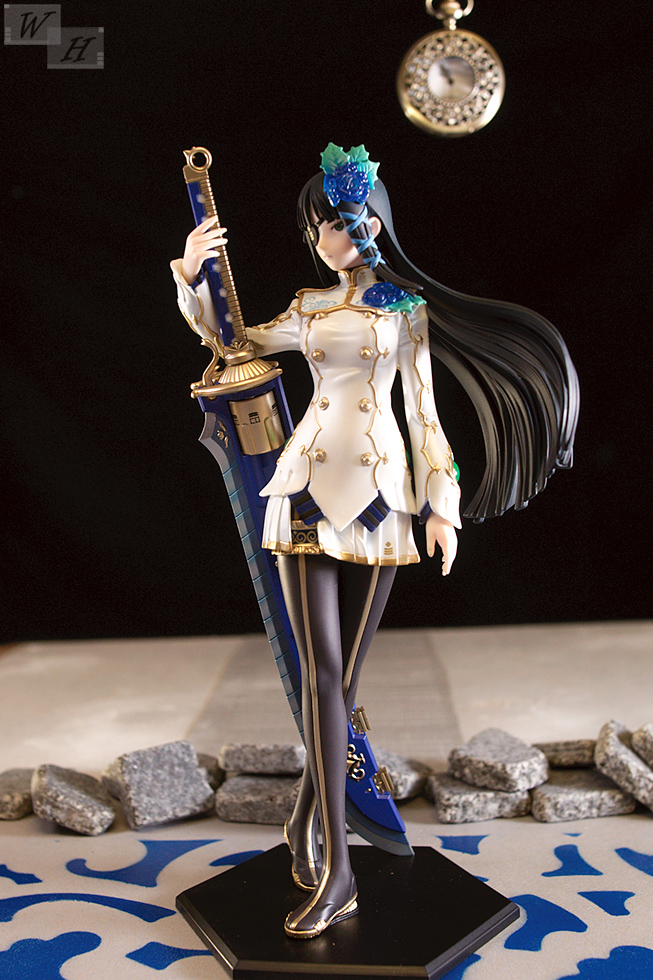 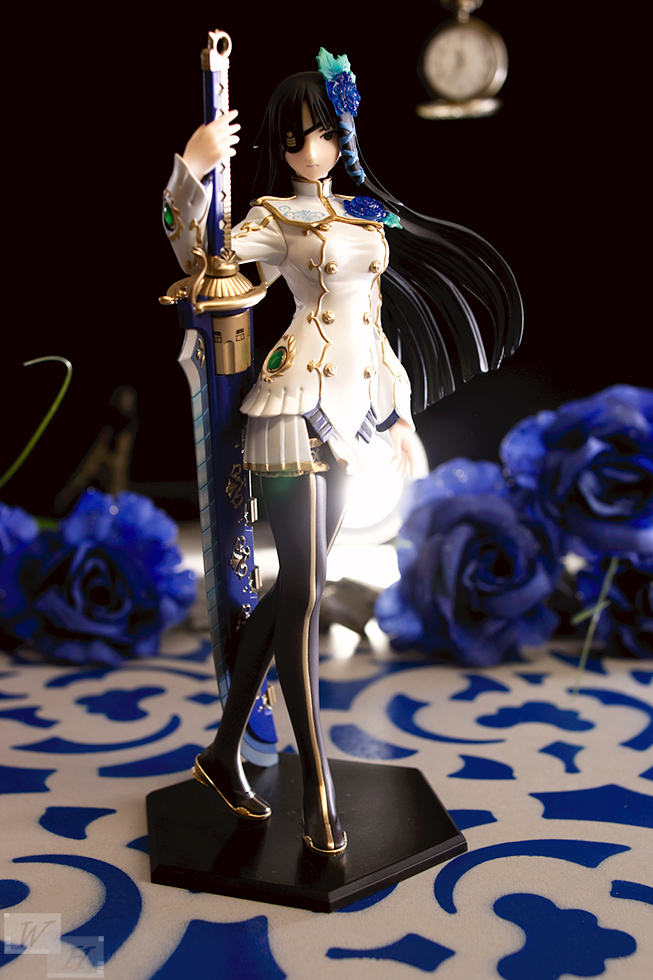 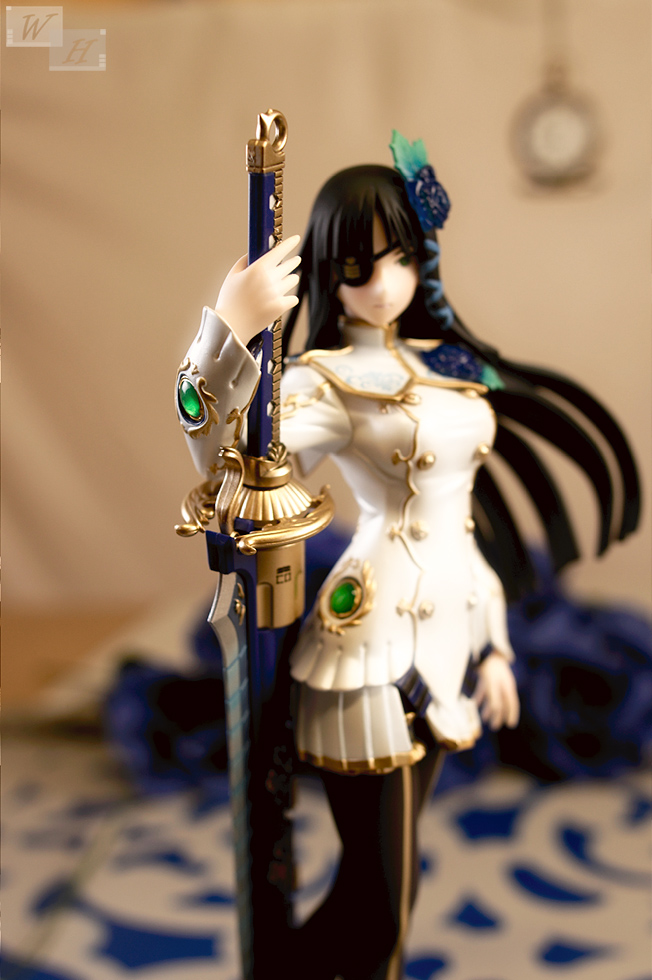 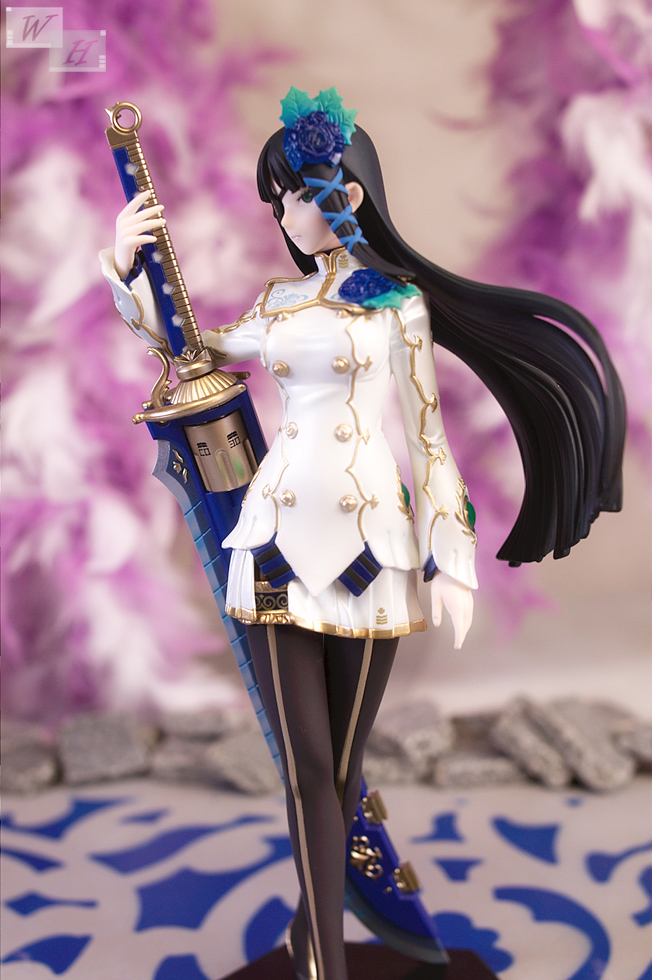 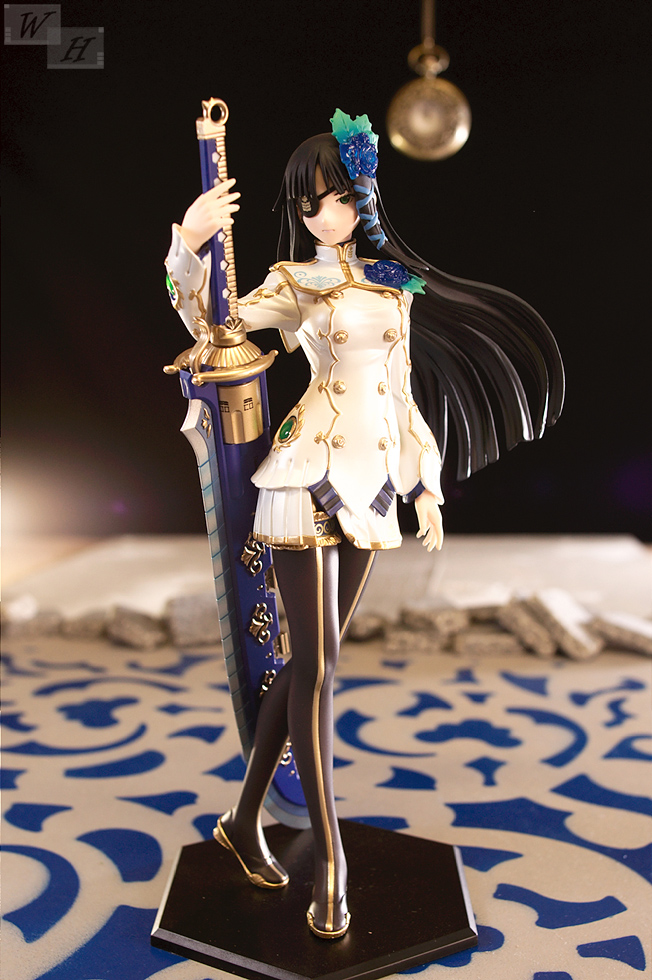 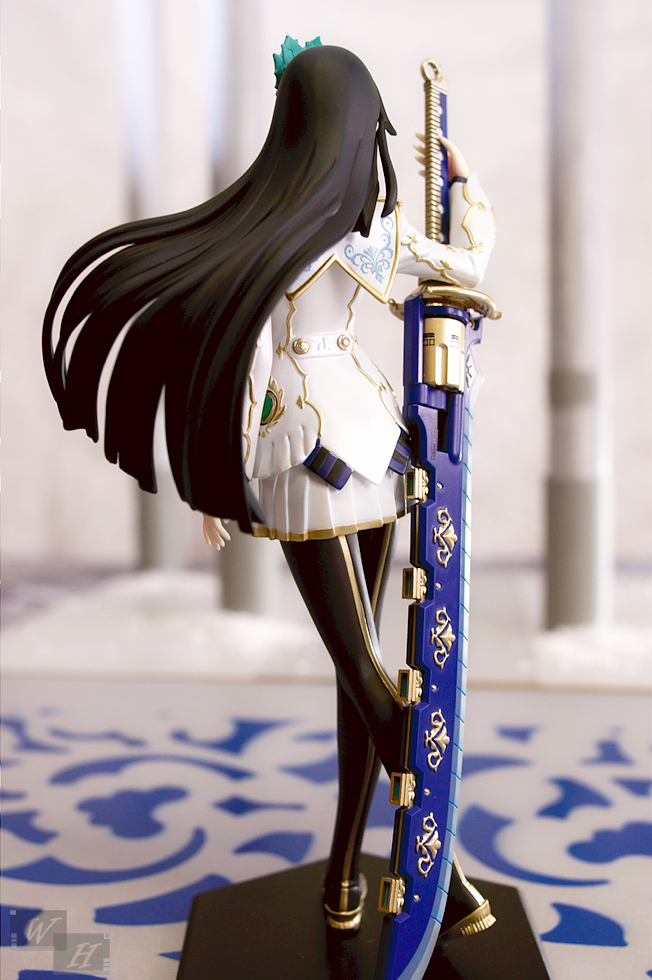 The mighty blue sword of her is called Steal Hearts, it has a really cool design with many golden ornaments and as litle feature it has a rotateable chamber. In the game that works like the cartridge system like in the Nanoha anime and increases the power to the executed attack. 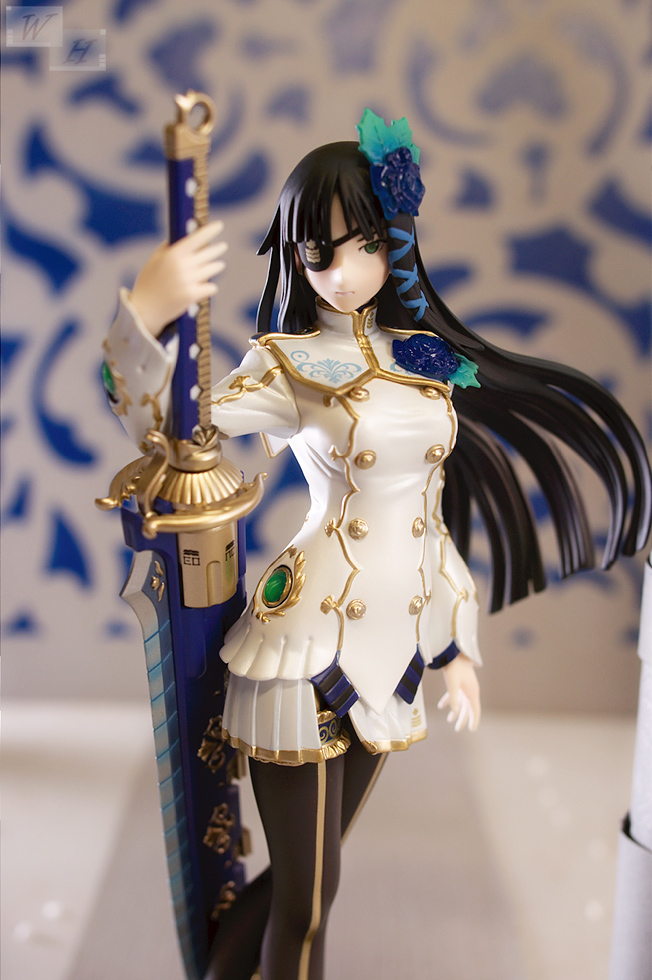 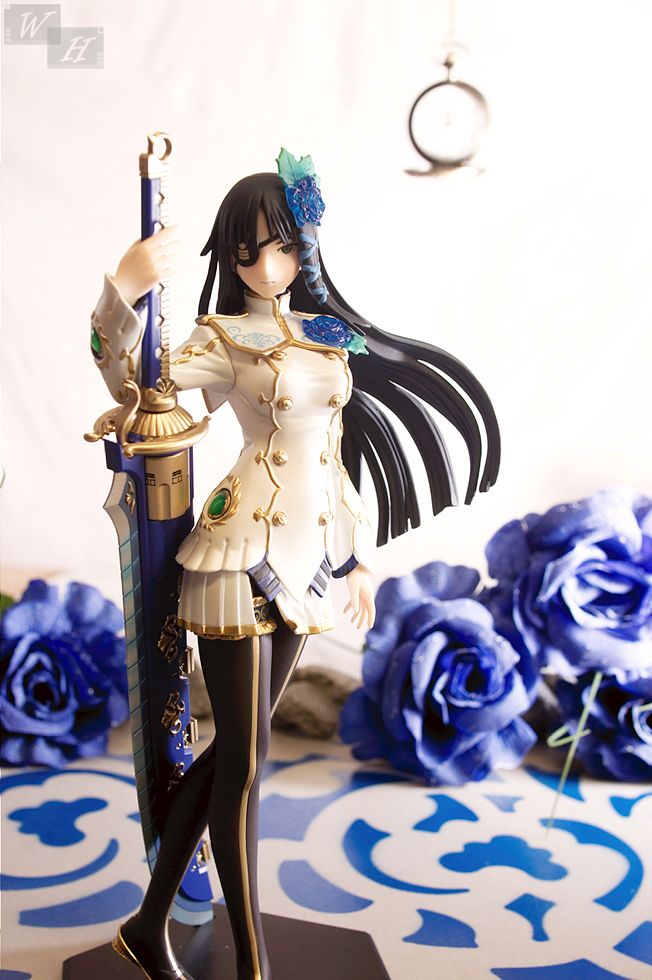 Now to the question if Nagisa was worth the long waiting time and the exclusive price tag in the end? Actually yes, it is very well done figure with a high qualiy in terms of sculpting and painting, all the golden and other details were applied very clean. Overall Nagisa has a beautiful and proud appearance, the elegant design of her outfit and the face make this figure shine. The hexagonal black base looks a bit underwhelming in contrast to the figure, but the uninspired bases can often be found at exclusive figures,only GSC seems to put more effort into these minor parts. Aside from that, Nagisa is a very nice figure that shows, that Volks has the skills to compete with the better known figure manufacturers like ALTER, Max Factory or the previously mentioned GSC. 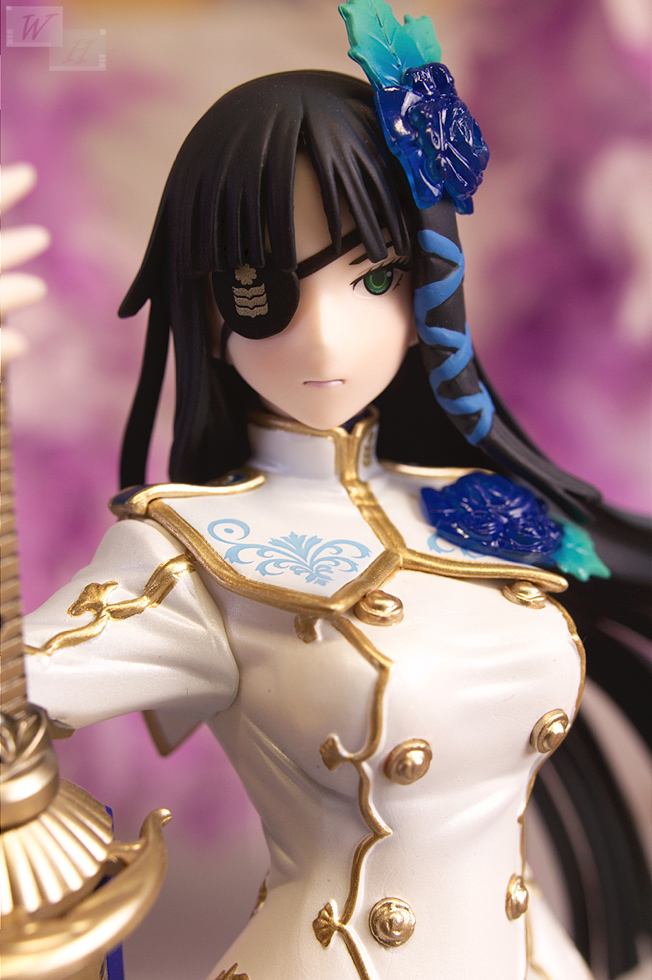 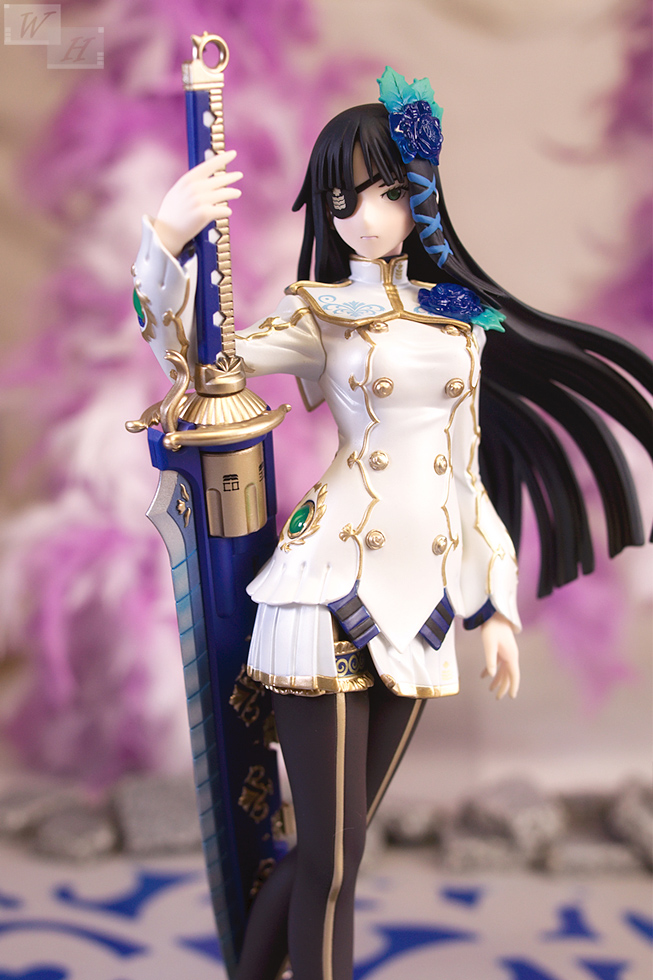 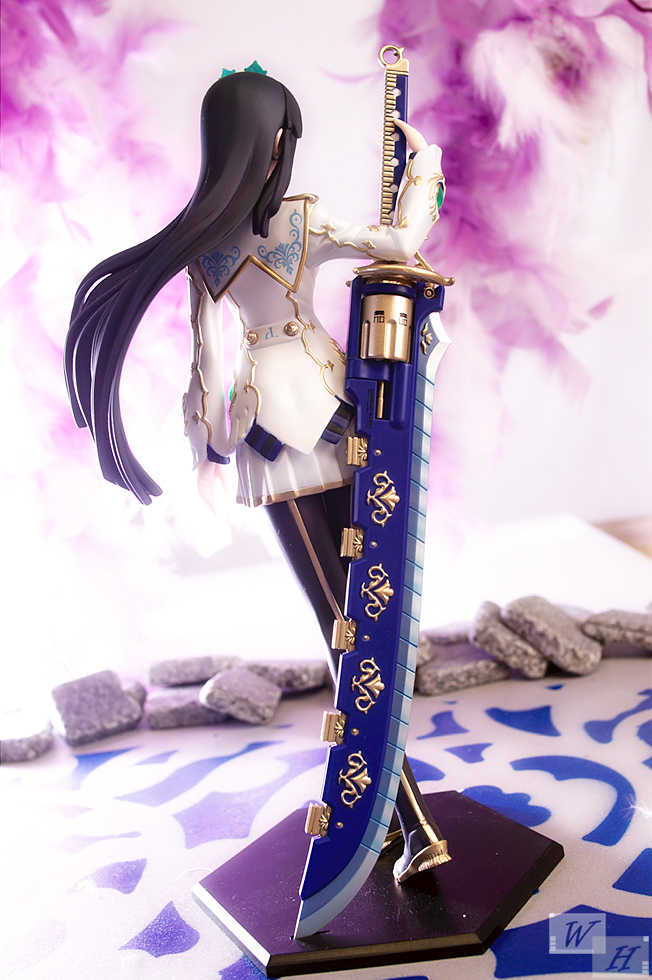 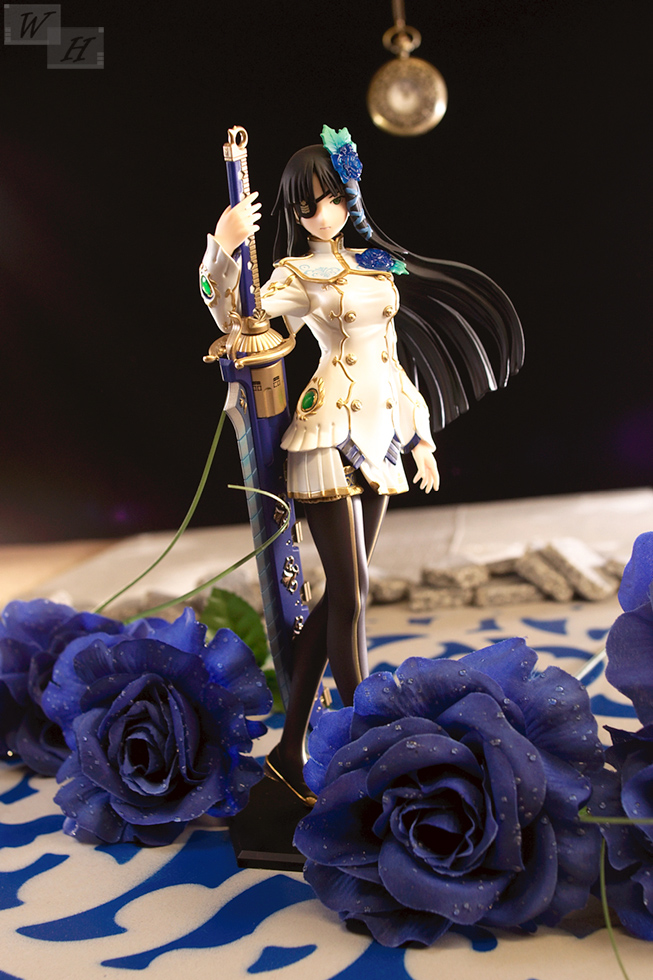 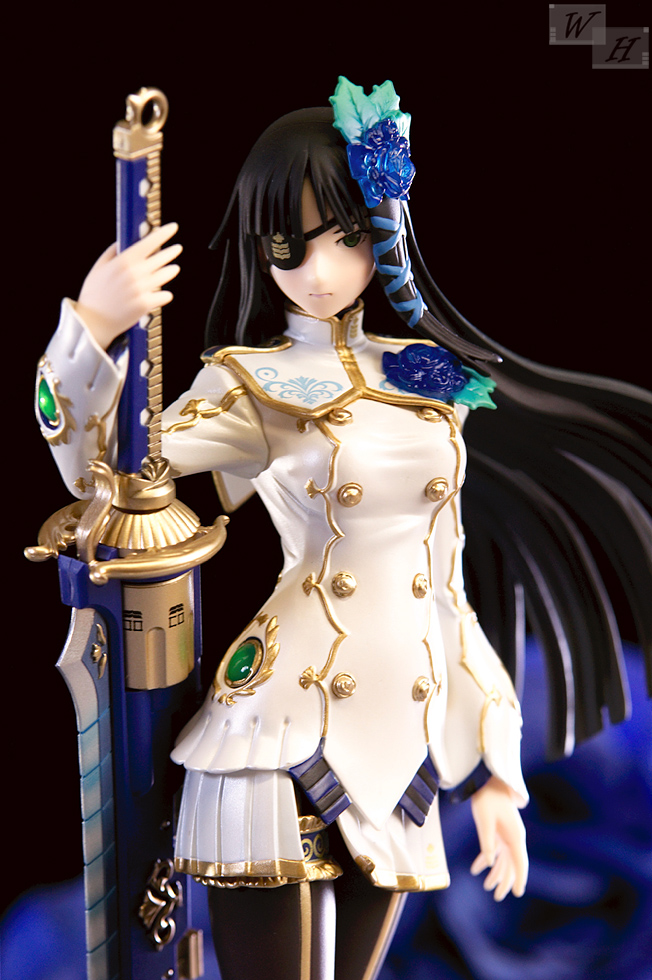 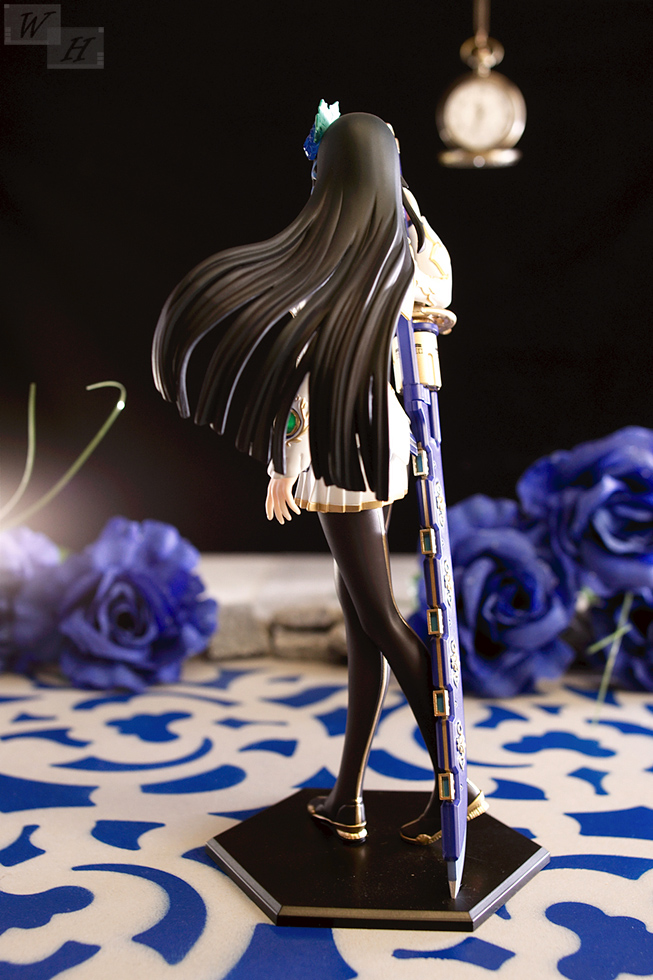 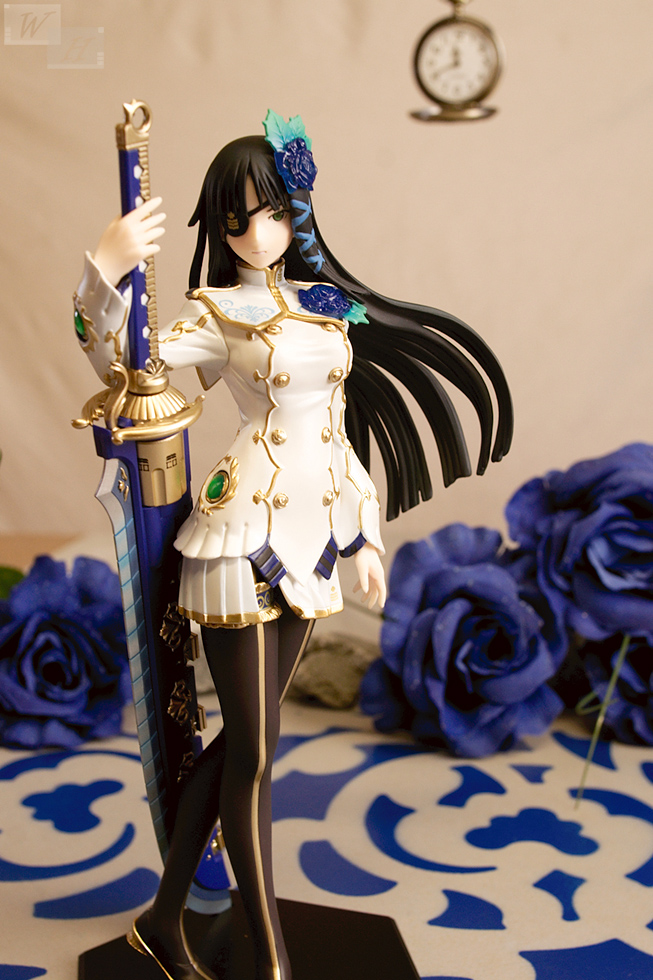