Another old figure review for today, Echidna caught my interrest as I started my daily Flickr check I stumbled over a few pics from Toy_Photographer. He made this old figure shine very well and I thought that I had to hunt it down. I found a cheap one on Mandarake very quickly.

There are many versions of Queen’s Blade Echidna figure, but I bought the 2P version with the clear purple base. The figure was released in June 2007, the early years of the figure industry.

Echidna is was sculpted by Osiris, one of my favorite sculptors, he also was the sculptor of my Dwarf, Princess Bitch and Queen’s Blade – Menace. Osiris always does a great job in giving the figures an appealing face expression and is quite skilled in complimenting female curves. Even though this Echidna is one of his earlier works, this figure shows all of these elements.
The Echidna 2P figure was manufactured by MegaHouse and is scaled 1/8 with a height of 20 cm.

The name Echidna is based on a creature in greek mythology, she was a being half woman half snake who never aged. The real origin of her are actually the Queen’s Blade Battle books and she made several appearances in the animes and OVA’s. She comes from a small Elf tribe and now makes a living with working as mercenary. As part time job she also likes to be the molestering instructor for young female warriors. On first look Echidna is a person of ruthless, mean and sadistic character, but she also is able to show kindness to persons she likes. 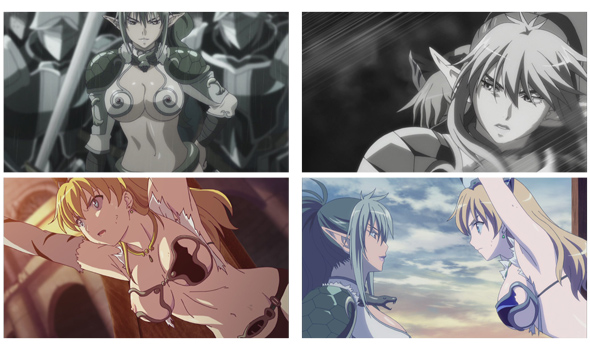 Hmmm, I would lie when saying that she is one of my favorite QB characters, but *damn* she’s a real hot and sensual Elf , woman is a better term, since she’s already over 500 years old. 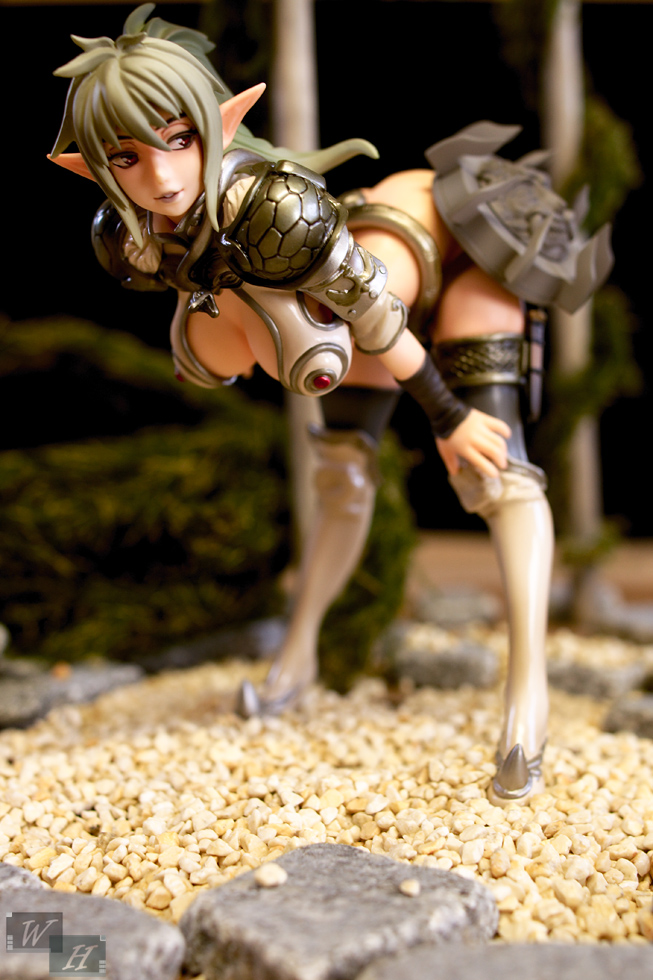 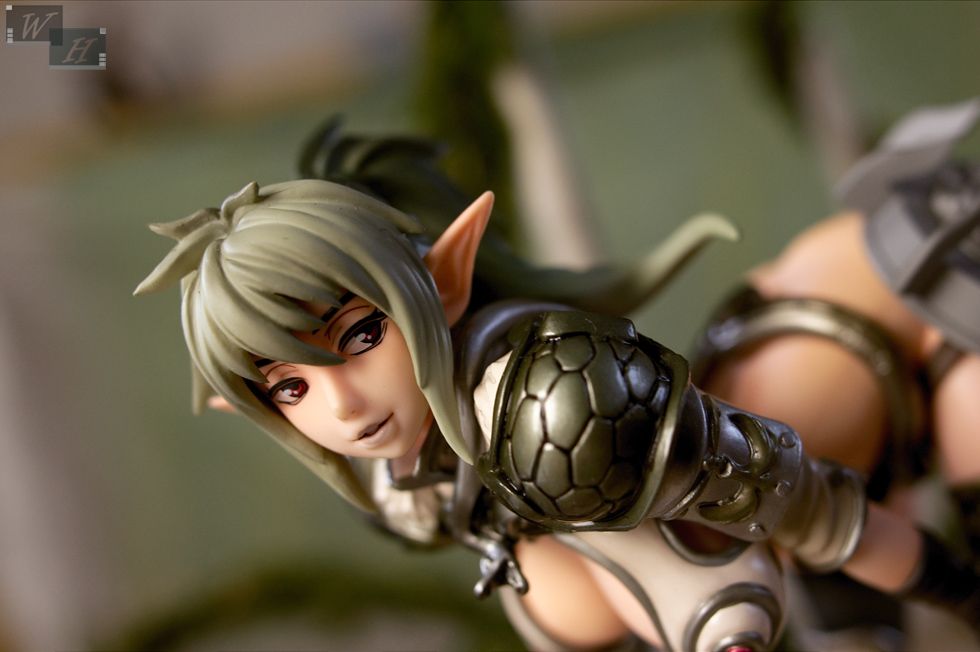 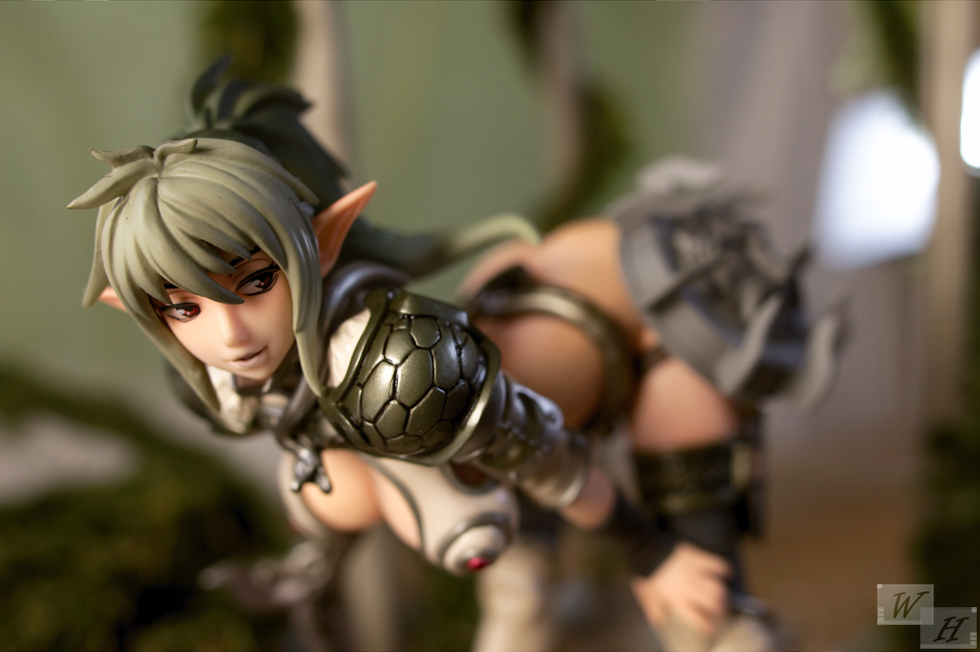 Echidna is sporting a wild ponytail hairstyle with long strands before her pointy elf ears, her front hair painted in a light olive color, while the ponytail is several tones darker. The liitle shading looks good and for a figure of 2007 the sculpting of the hair also looks very good.

On a personal note I mainly bought the figure because of the beautiful face, it is very, very detailed and gives the figure a livelike appearance. I love the slanted eyes with the black lining around and also this lascivious blush underneath is very appealing. The mouth with the purple lips gives her this certain playful and sadistic air her character has. On the bottomline Osiris really knows how to make lovely faces, with the detailed face  Echidna even rivals new figures. 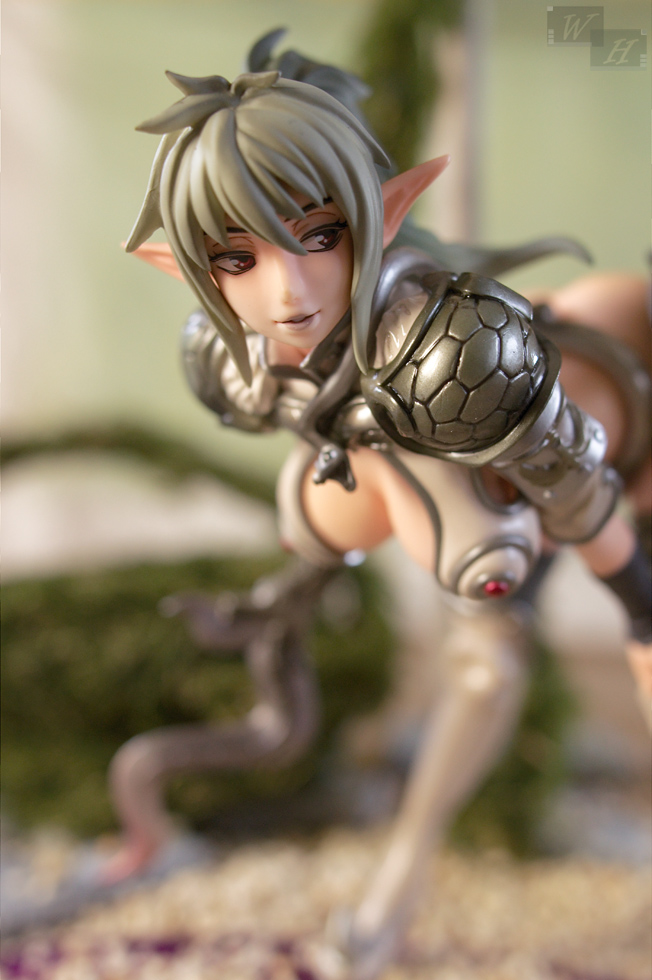 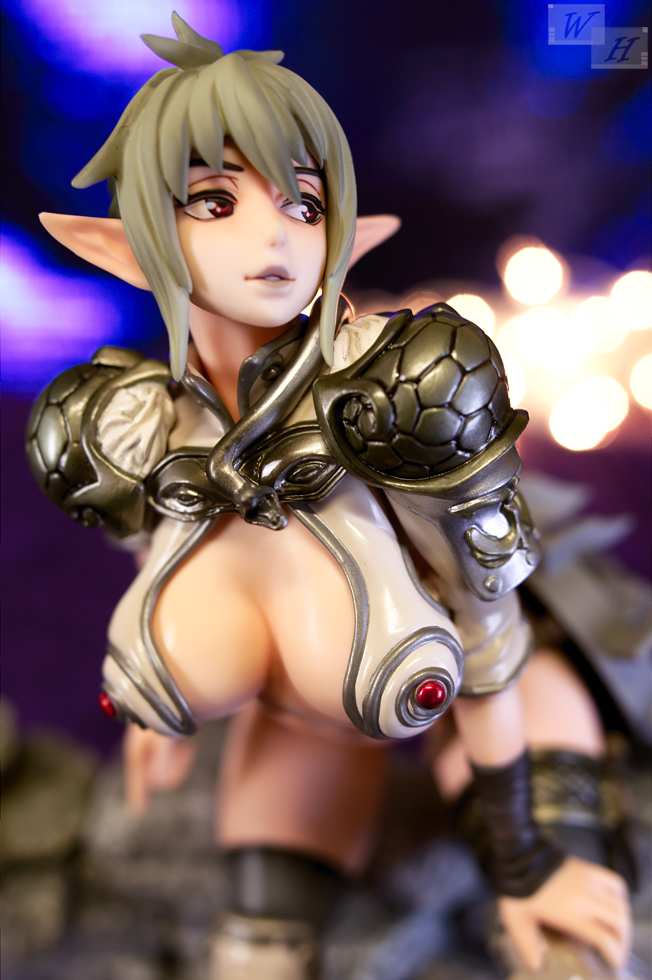 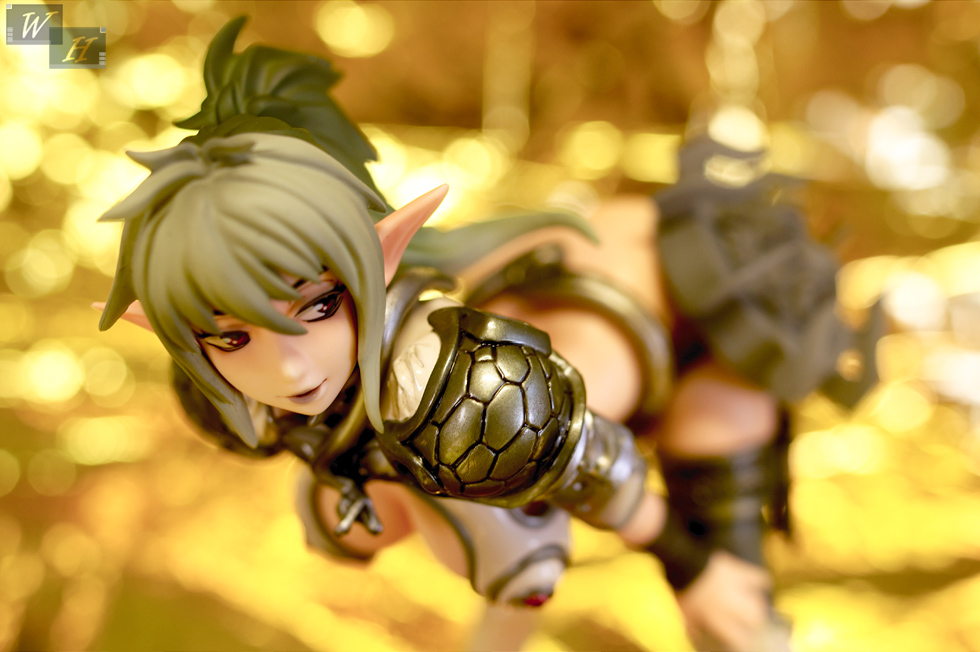 Compared to other Queen’s Blade figures, Echidna’s outfit appears to be fallen into the military paint bucket, all the beige, green and olive slightly reminded me of my past model building days.

On top she is wearing a long sleeved top with a open cleavage with some armor parts on top, the detailed  metallic colored parts and ornament details all over her outfit look pretty nice. Other parts of her outfit are also the shiny beige long boots with dark stockings underneath.

The upper top is also castoffable, while I’ve seen better solutions for such a feature, it is a quite charming how it works with this figure, the snake brooch is holding her top together and you have to unclip it to expose echidnas breast. In the anime Echidna has a pet snake called Keltan, this snake is also used to cover Echidna’s private parts a little, not that would mind anyway ^^. The snake thong can be clipped and unclipped together to strip Echidna even more.

The body of the figures is very attractive, the deep bend over pose also gives Echidna a vulgar appearance. She has nice proportions and a sexy back, her stretched out butt is quite big and round. Even though her dirty snake underwear is very revealing MegaHouse only gave her Barbie anatomy, considering her character, a moe daring attempt would have been more fitting. 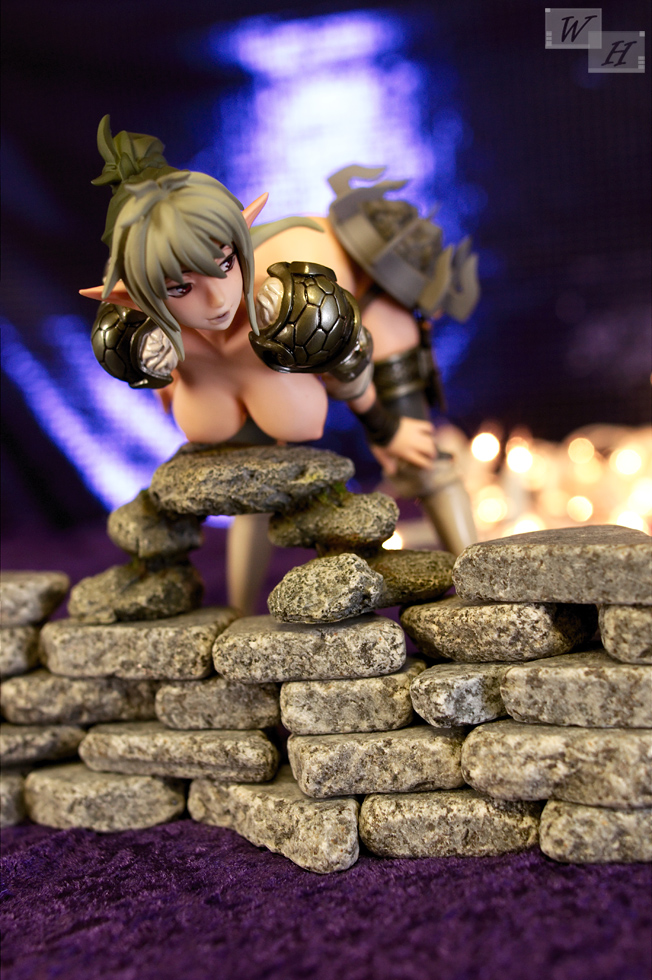 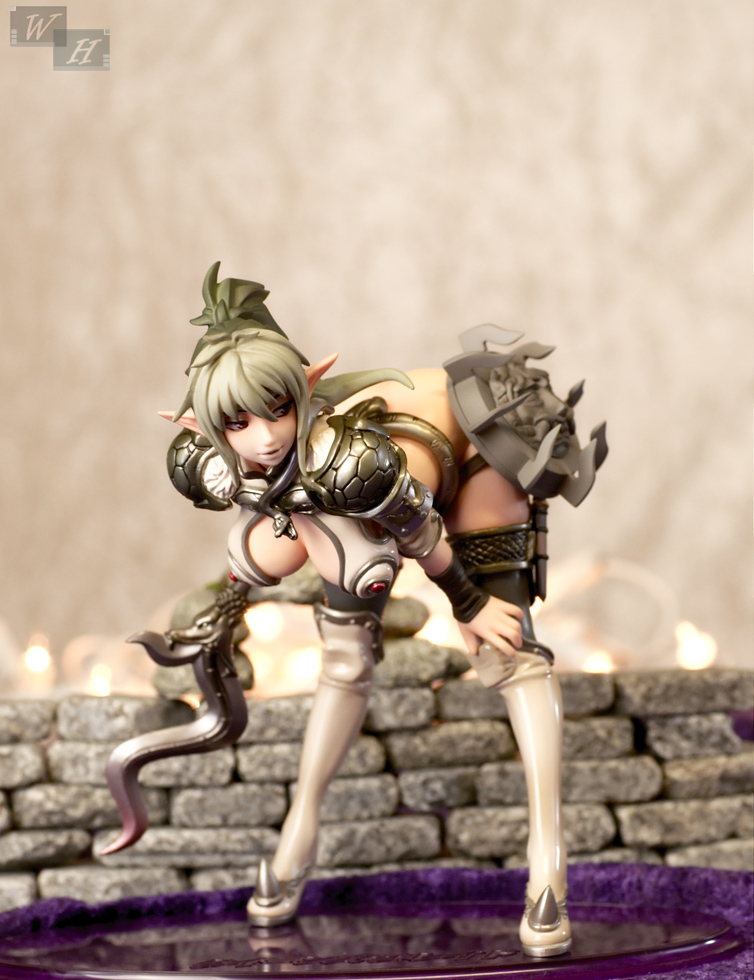 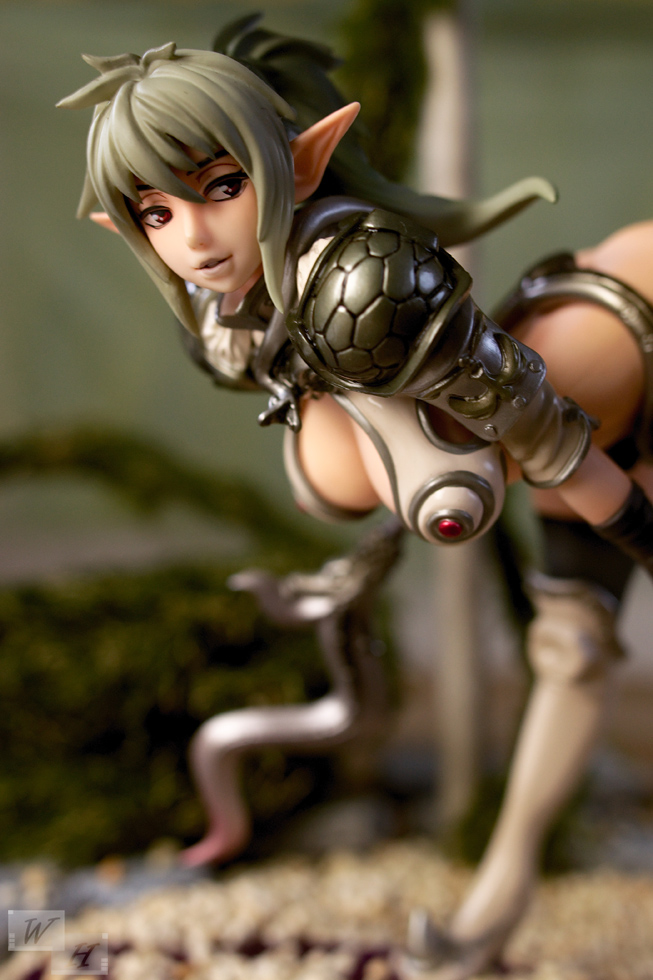 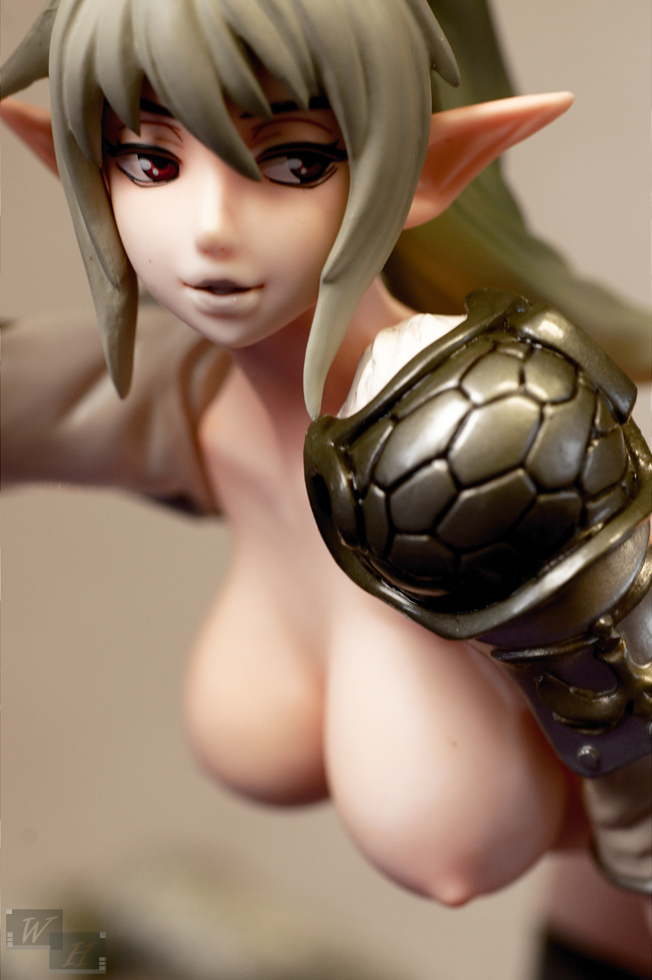 The body is sculpted nicely with good attention to detail, but the bothering part is that her bare skin areas are very shiny, I really felt the urge to spray her with a can of top coat. In a dressed state that isn’t that prominent, though. A more designwise (flaw) is the connection of her arms with the body, this was executed with rather big and clumsy looking connectors. The not so nice look is most apparent when the top ist casted off, I assume they didn’t know to implement this cast off option in a better way back in 2007.

As far as I rememember I’ve ordered this figure as unopened storefront item, I think the long stay in the box was’t the best thing that happened to her. One day after the shooting I noticed that her butt was shiny like a bacon rind and had an ugly muddy green stain and a dark 2mm spot on her butt cheeks. After rubbing her butt with some fine sandpaper I could fix both issues. 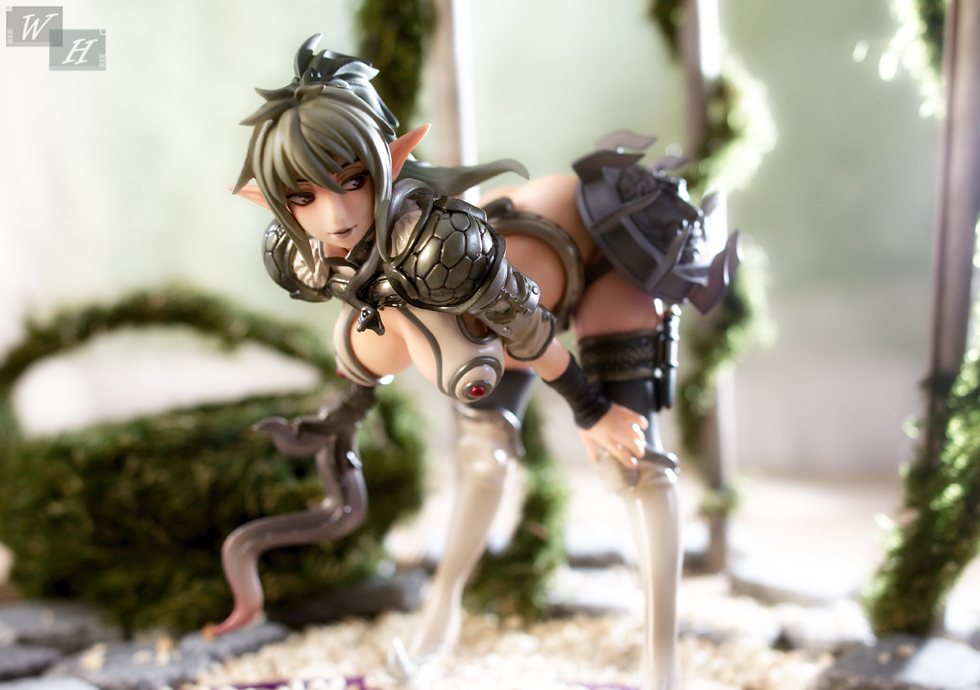 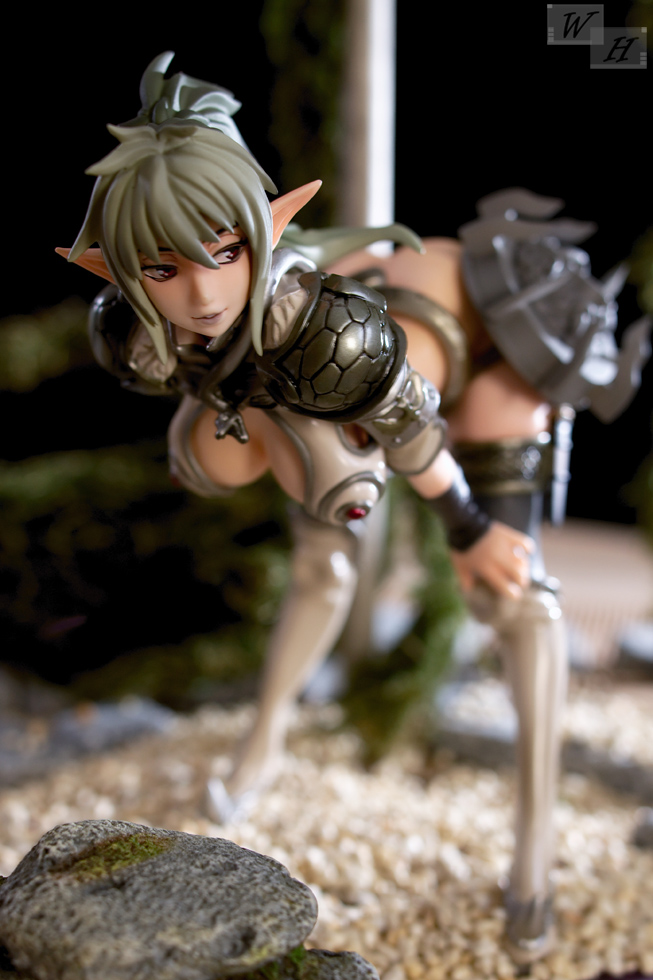 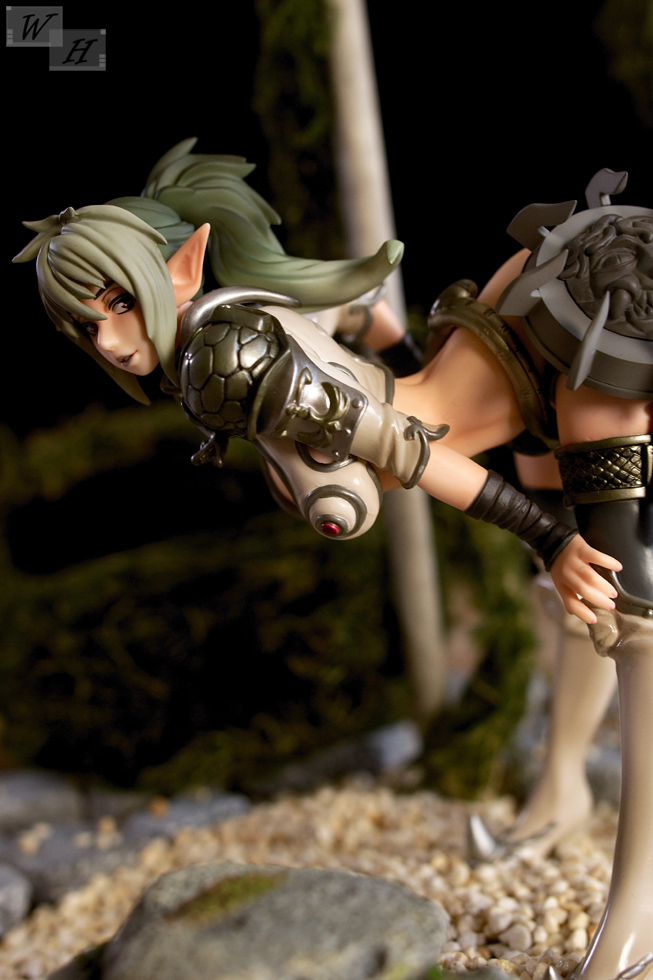 The Queen’s Blade – Echidna – Excellent Model figure from MegaHouse is a nice figure with a beautiful, expressive face, that can even compete with todays figure standards. This figure also has a cool, detailed outfit and an interesting, bold pose. The minor flaws I’ve mentioned are no real dealbreaker and for 3500 Yen I shouldn’t complain too much about an old figure from 2007.

In case you are interested in the Echidna from MegaHouse I would suggest to buy the special edition who has a slightly improved paintjob and no shiny skin problems like the normal one.

Biotoxic wrote a review about here on his blog. 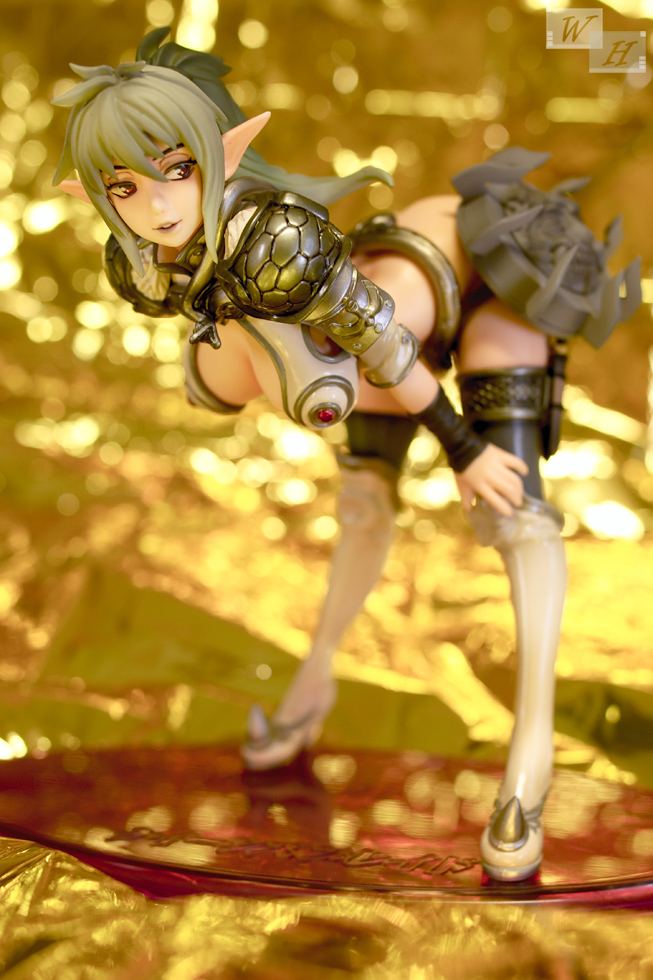 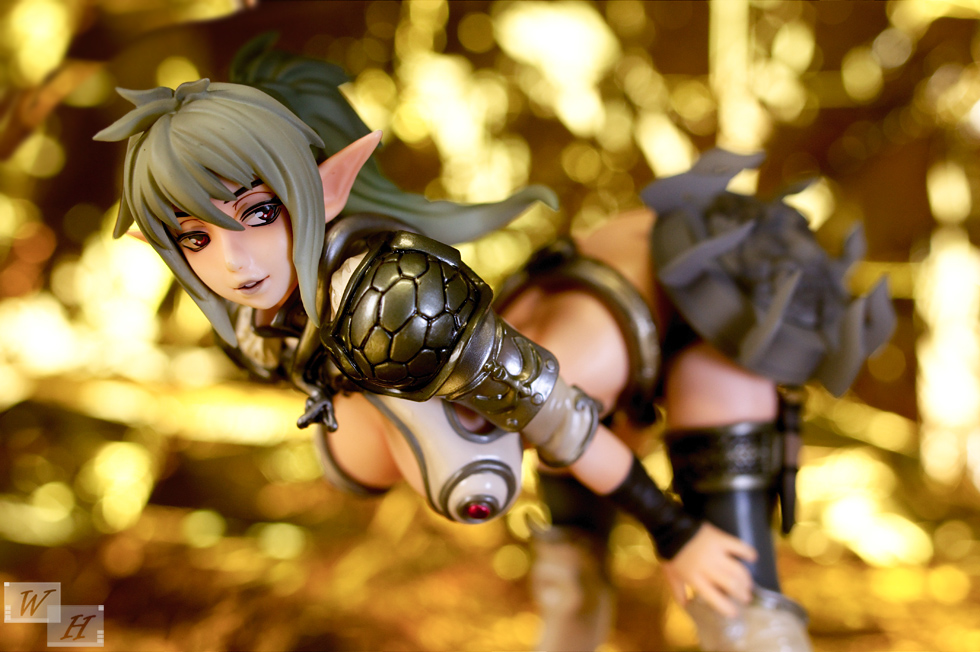 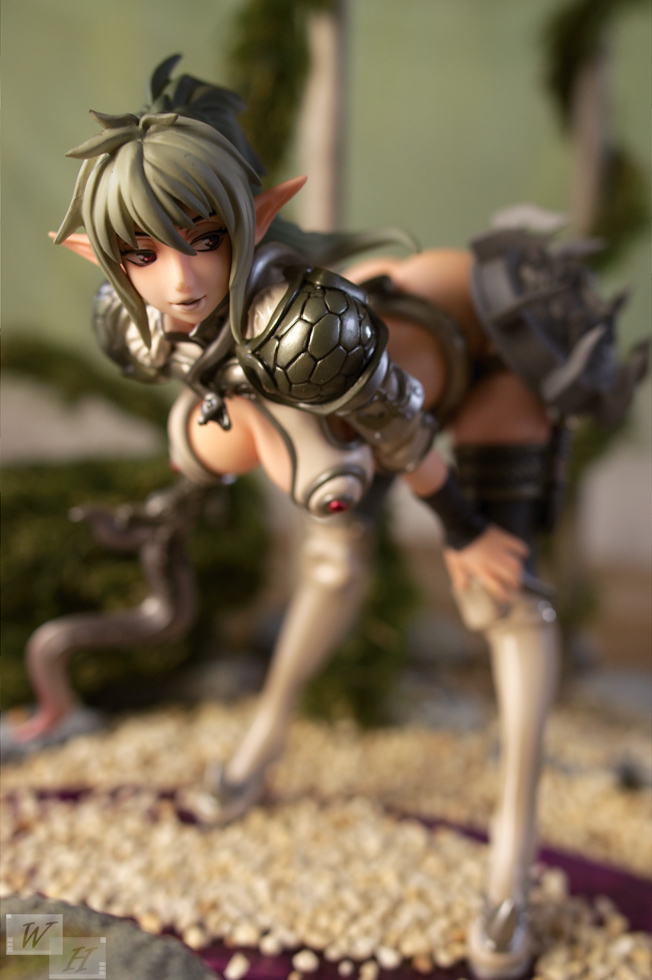 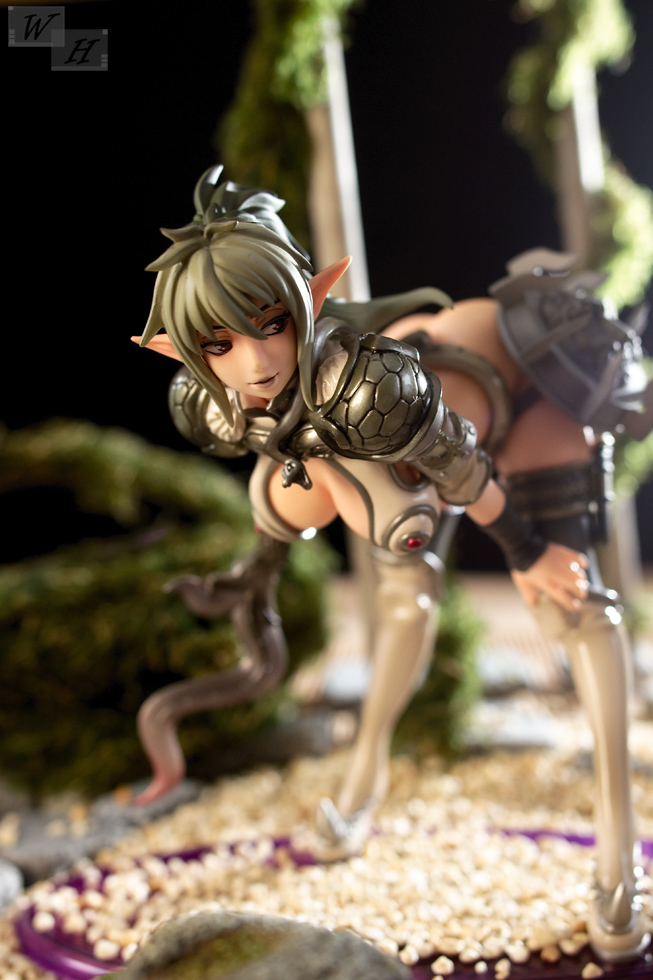 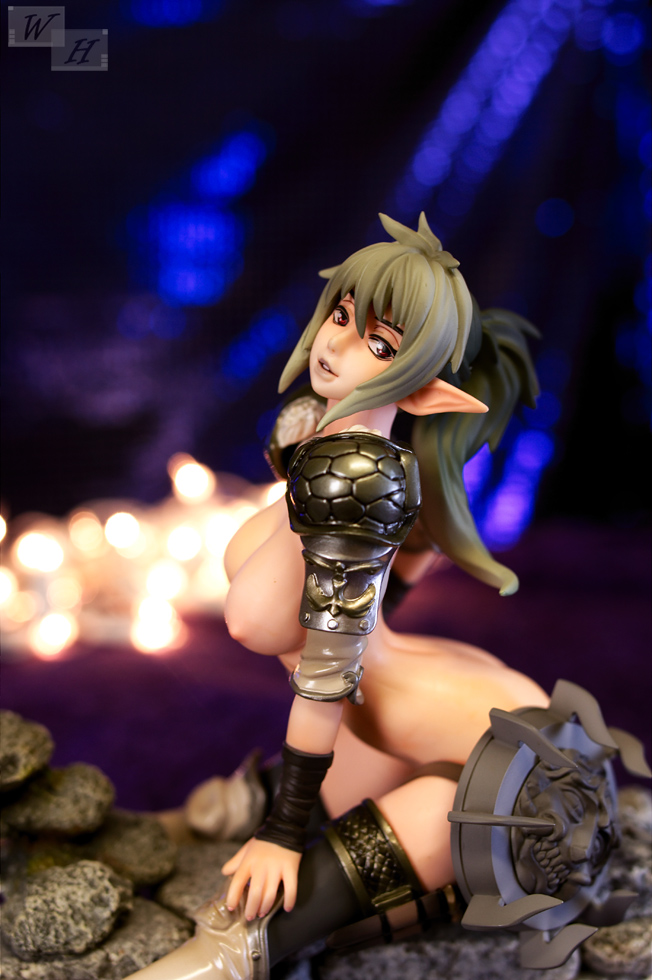