Momohime is a quite popular figure from ALTER which was released in 2010, she was re released in January 2013. I already wrote a review of her. With the upcoming  re release I had a vague idea about a reshooting of this figure to use them or a new blog post, but somehow I couldn’t build up the motivation to do so. Only after an inspireing post from Miette-chan I could gather the motivation for creating an idea forthe settting and making the pictures.

Im a passionate figure collector who not only puts the figures on the shelf, I also like taking pictures of  them. I always think about a fitting setting for the pictures to put them in the figure reviews afterwards. Sometimes I also get so so results, that are barely acceptable for me. Especially when looking back at older pictures I sometimes feel a bit dissapointed with some works, be it bad lighting, crappy white balance or a setting looks not as appealing as expected. 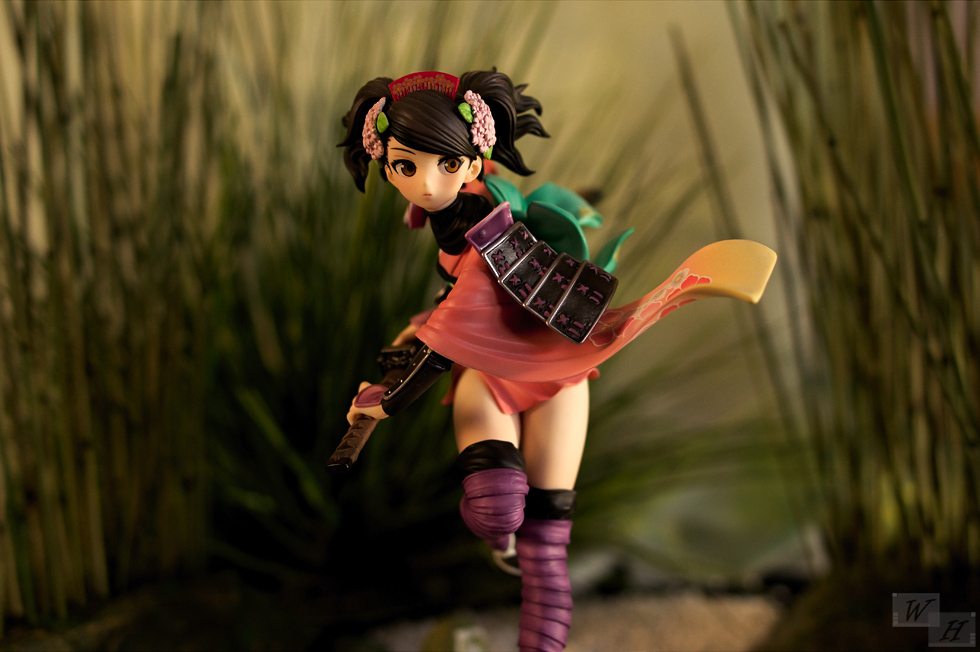 Well, everybody started at a certain point and due to improvement trough practical training, it can’t be helped to be slightly dissapointed when looking at earlier pictures. Even nowadays I won’t always created the results I wanted to get. Sometimes I feel the urge to think about better ideas of a setting for a certain figure, finding ideas can be pretty easy or give you a headache.

Between preparing reviews with pictures and text, finding time to take pictures of past figues often comes a bit short, but with the right idea in mind, it can be a rewarding time investment.

At best looking back at a figure and taking her for a new shooting can bring you the joy of trying something new and getting better results compared to the ealier ones. It is a lot of fun. 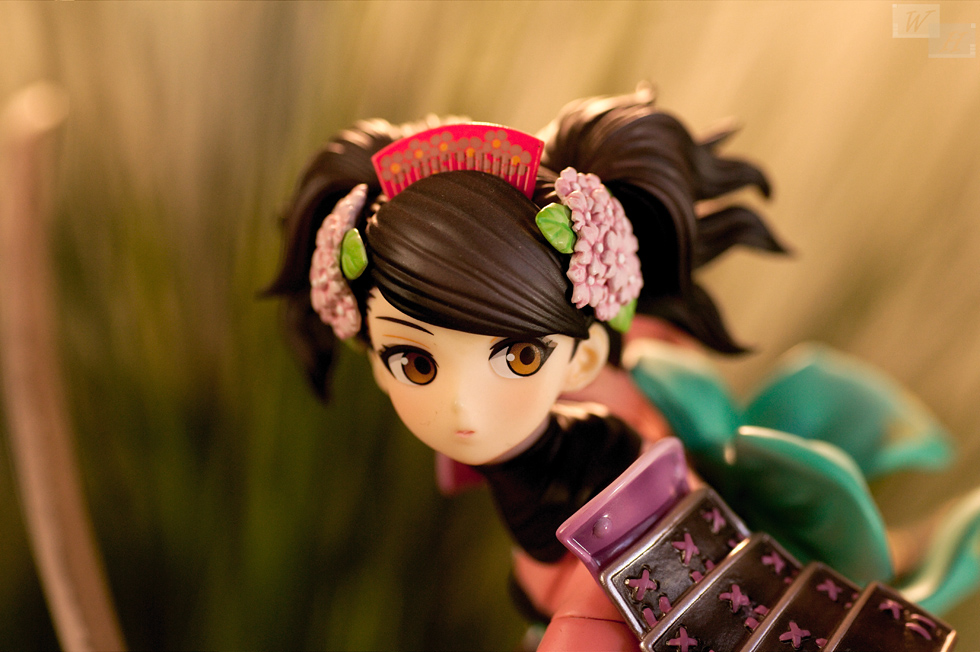 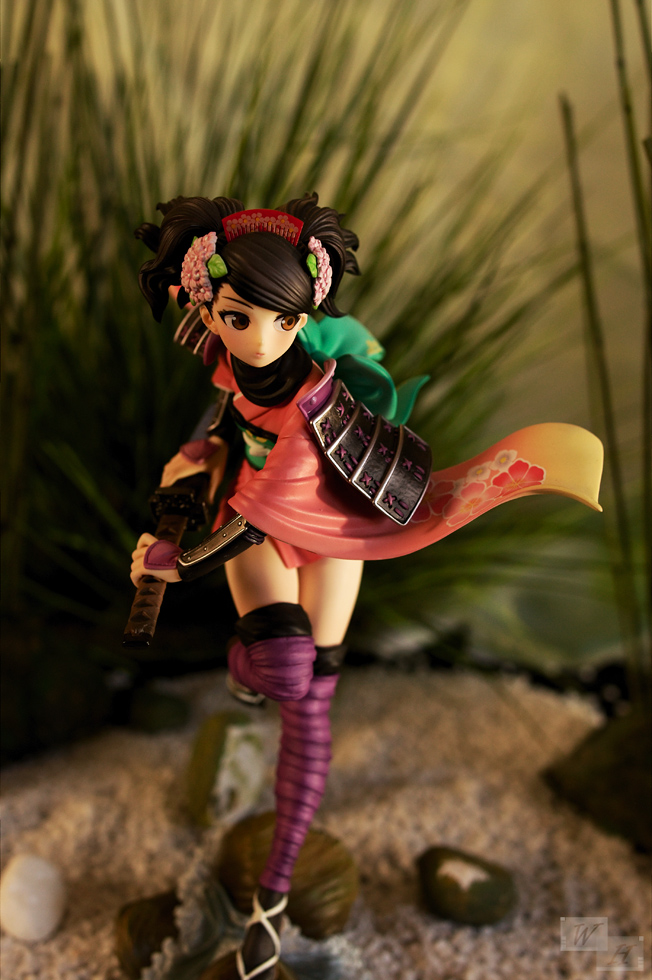 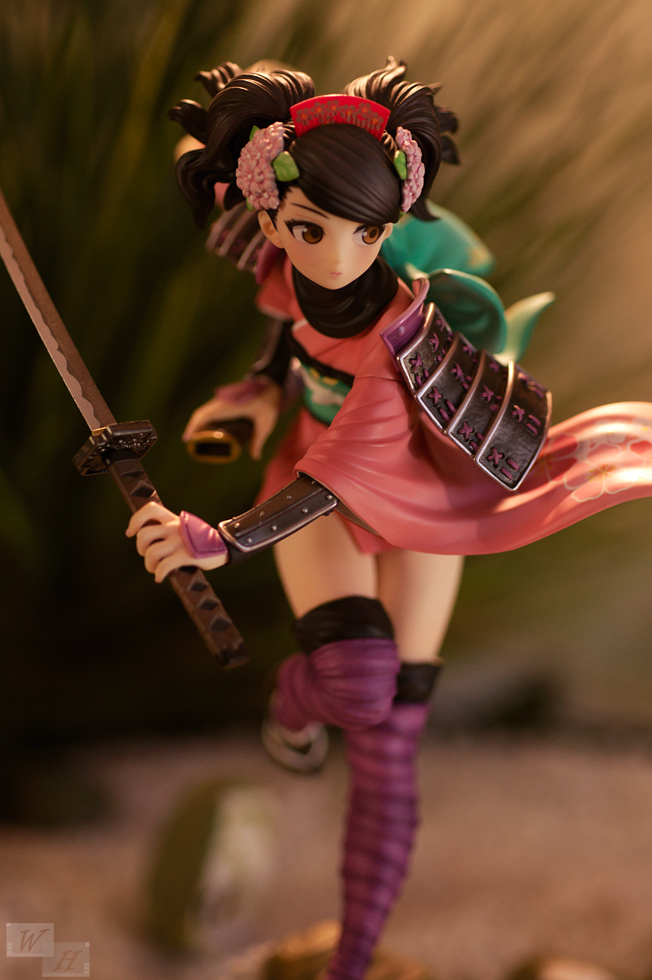 Momohime was sculpted by Fukumoto Noritaka, the figure is nicely detailed and has many interesting aspects. I would say Momohime is one of my prettiest figures, her head has a nice shape with a sweet face  and very expressive eyes. This figure convinces in her traditional japanese appearance, her colorful Yokata looks beautfiul. These armor on her give her this light martial touch, I really like the contrast between the petite, pretty girl and rough armor parts. 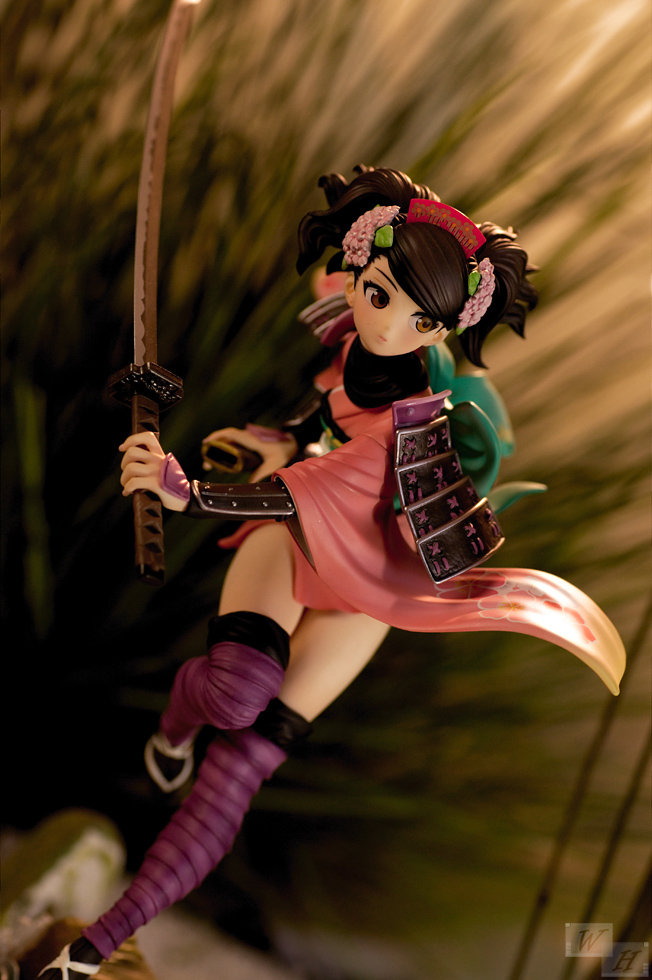 The idea behind this shooting was to create something like a Japanese bamboo forest with Momohime walking through a dried out riverbed. The previous indoor shots had a quite artificial look with weird white balance and so this time I aimed to get something more natural. 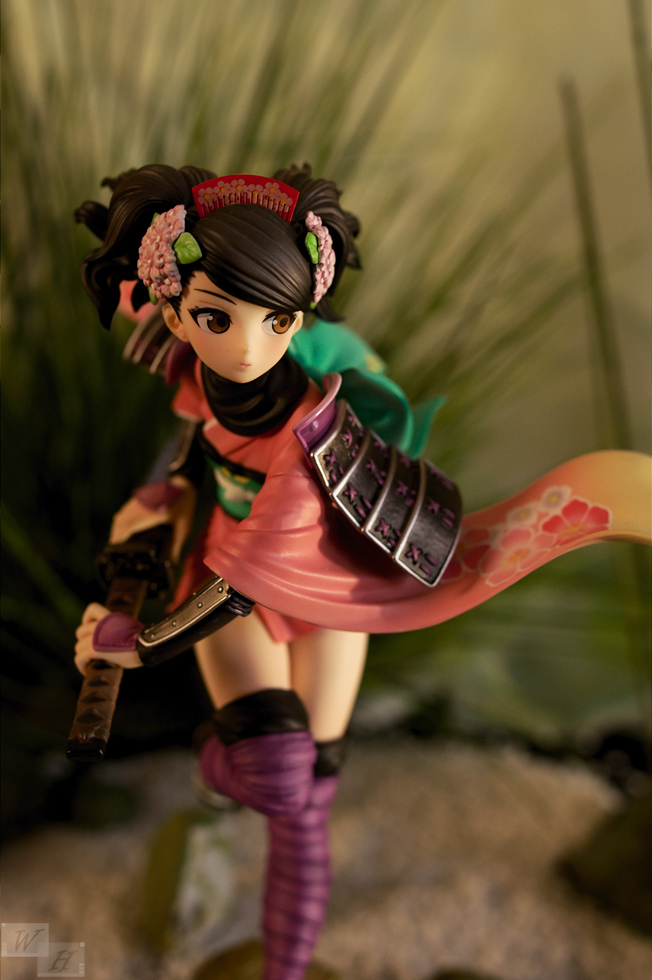 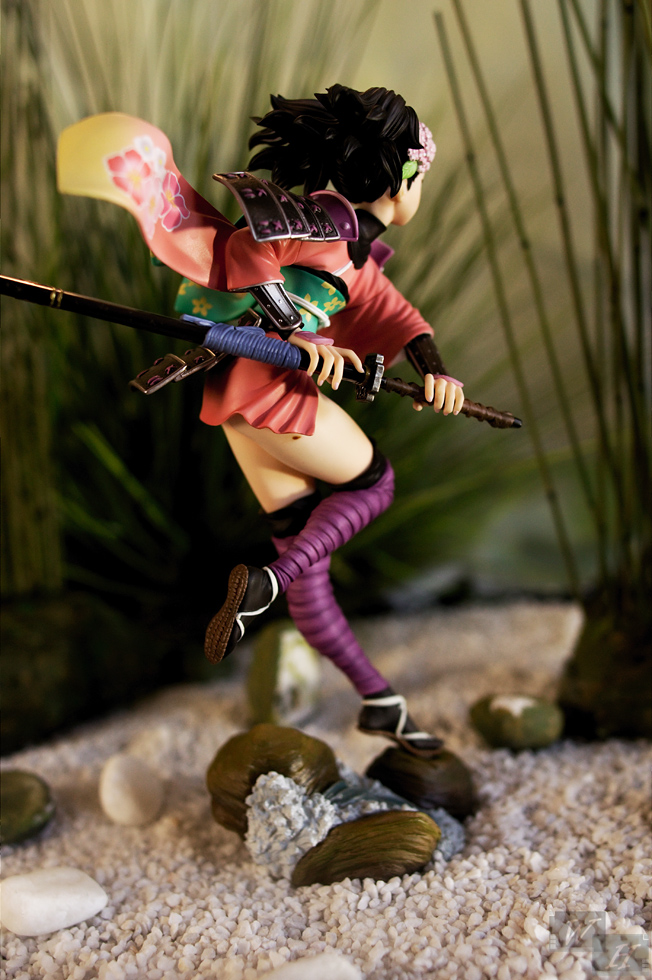 I already had a few things at home like the little white stones and the pebbles. I only bought the grass and the two foam blocks at an arts and crafts shop. The foam blocks were cut in shape, after that they were wrapped with glue and paper and painted in earth and swampy colors.
A few pebbles received the same paintjob treatment to match the base of Momohime.

After everything dried properly, the foam blocks were ready for step 2, the previously cutted grass was pushed in the foam blocks in a tight pattern. Then I placed everything where I wanted it to be and pinned white and transparent green fabric at the wall behind. 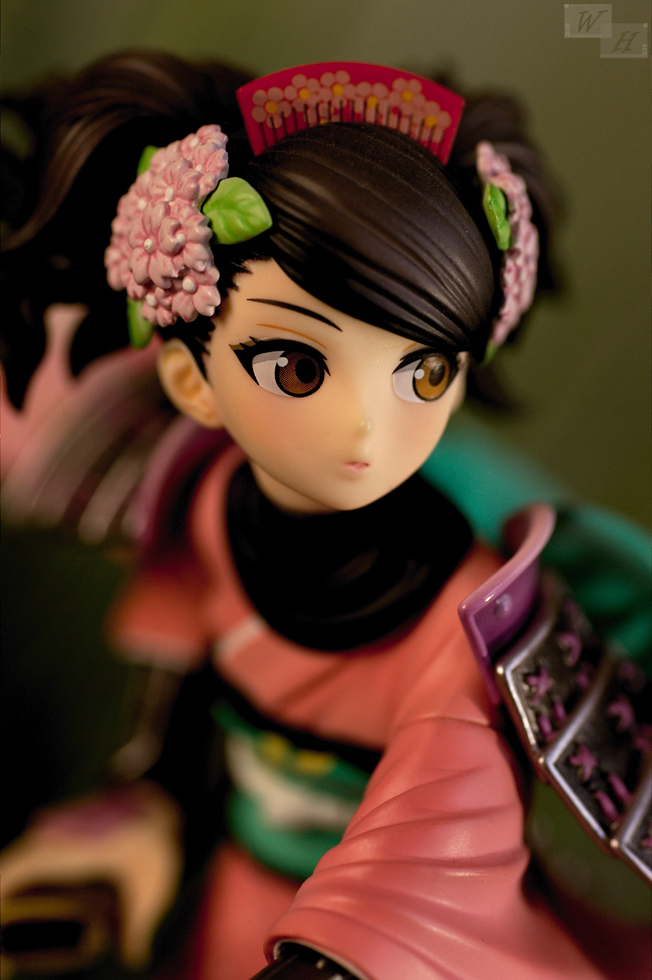 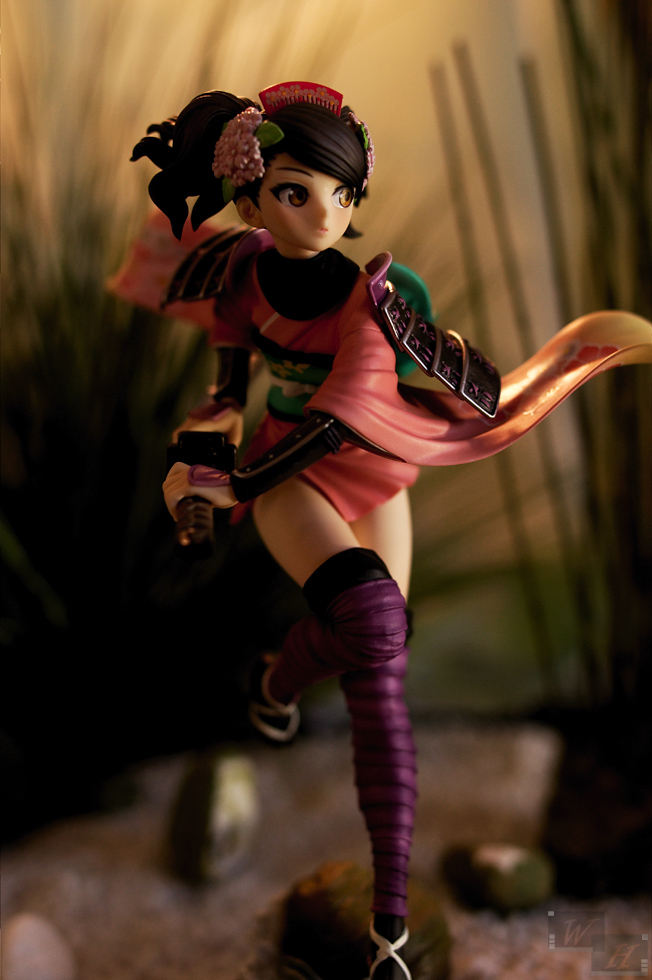 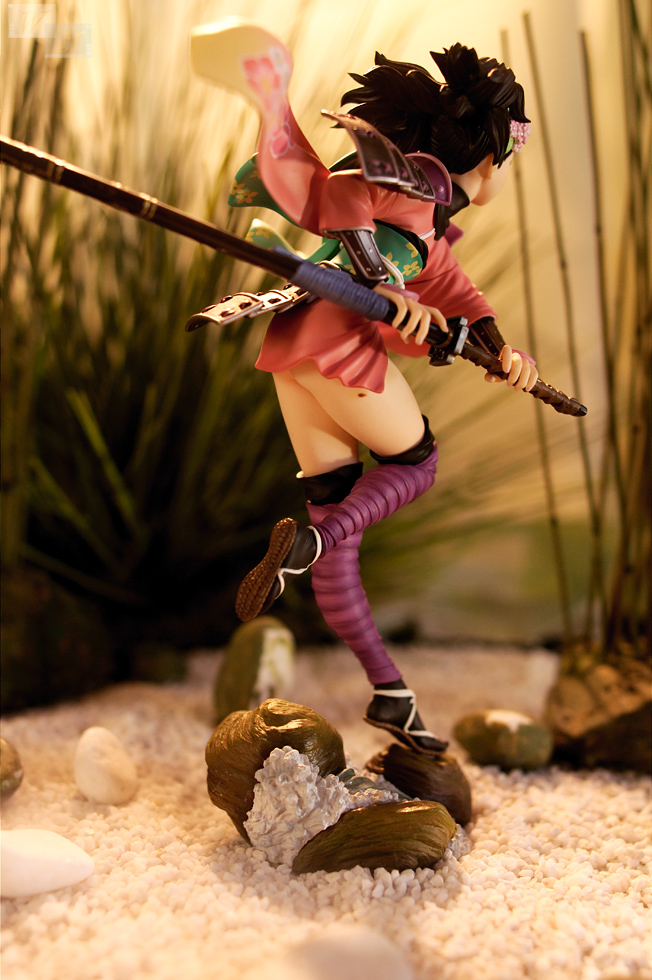 Comparing the new pictures with the old ones is a bit unfair from technical point of view, I guess I even had no flash at that time. For a little fill light I used my trustworthy 60×40 Walimex softbox, for some spotlight I used a bright led bulp. My two wireless flashes were placed randomly, it’s still some kind of gamble for me how the flashes will work in the pictures, even though the new one has a manual mode, one of the flashes was placed high above from behind. 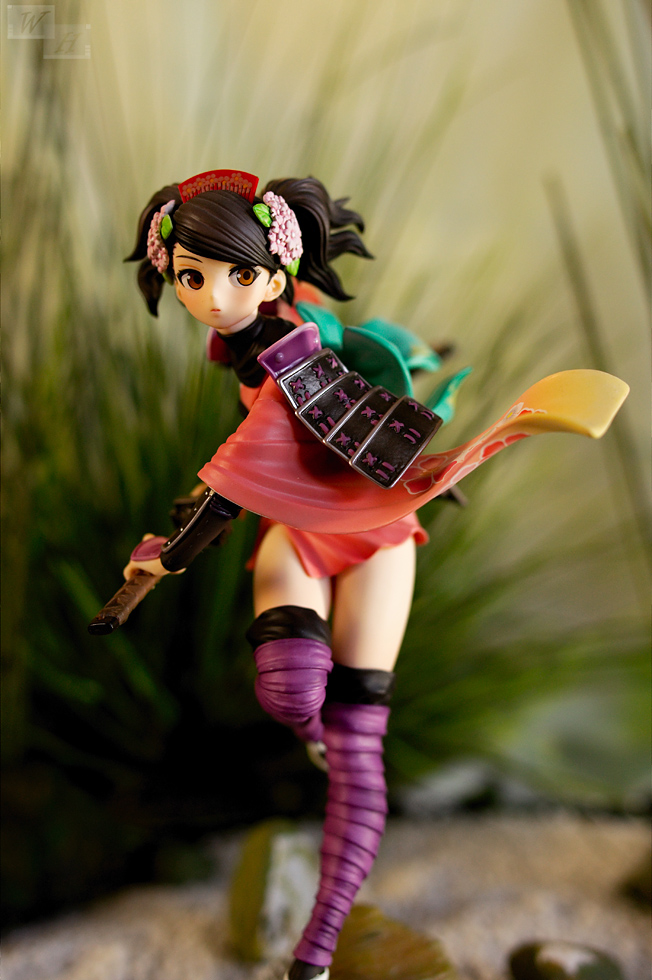 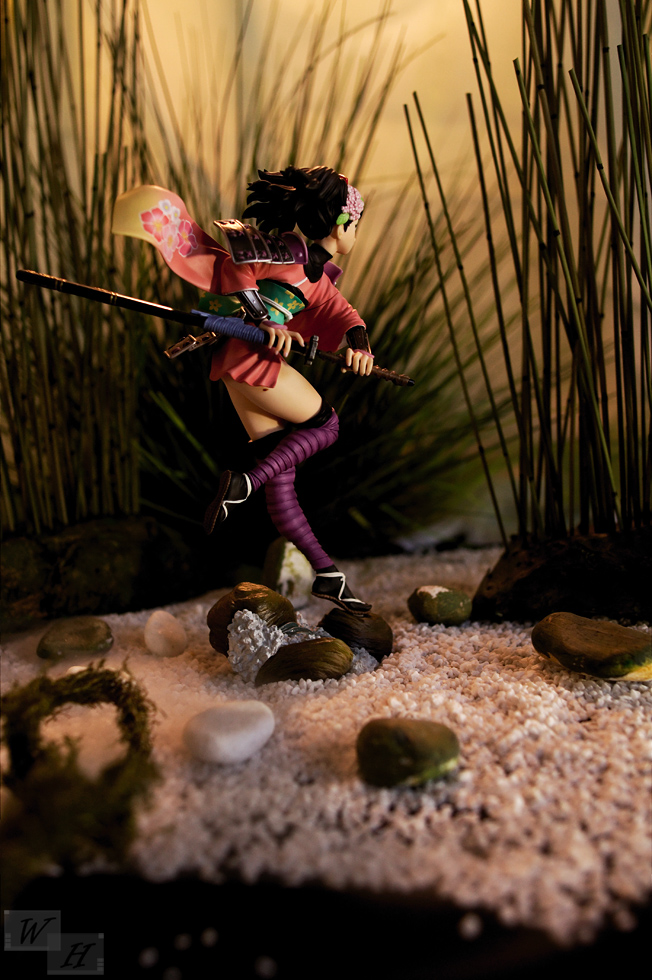 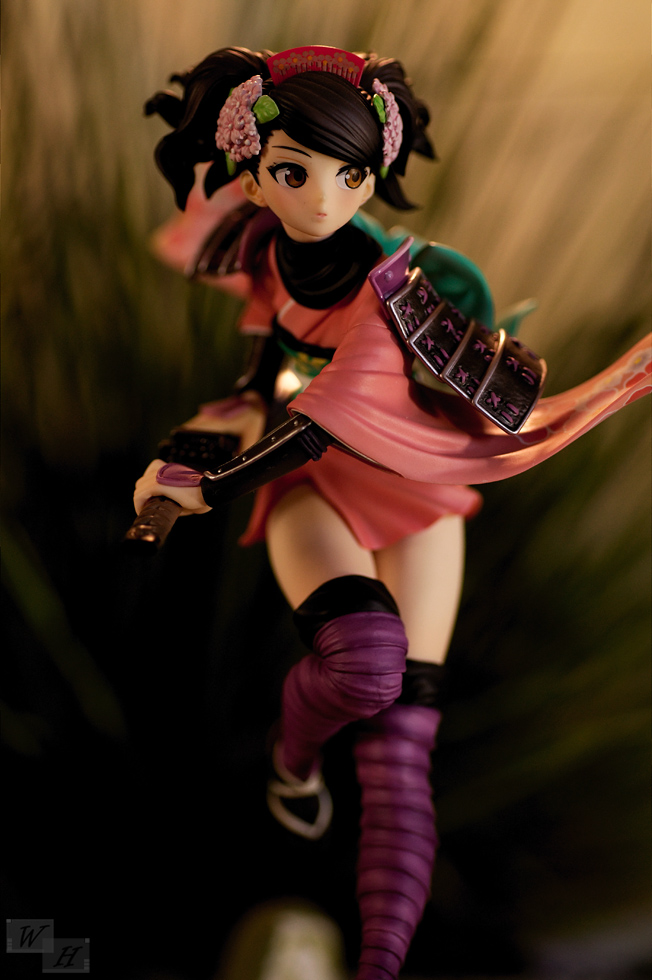 After weeks of thinking about an idea for a better shooting or better said setting, I finally gathered all needed parts and motivation to get started to let Momohime shine again.
Im quite satisfied with the outcome of my reshoot, it was fitiing surrounding and the light setting helped a lot with creating the desired more natural look in terms of lighting and colors.

Overall aside from all the hassle, it was an rewarding task and Im glad that invested my time to achieve better results than 2010, check this “updated” old post for reference

What not worked in this setup was the fog effect, the little fog machine had no sufficent output to create the desired effect in the rather bright setting, when I think about it, I could have flooded the “riverbed” with water, but water in a room is no good idea and I have no idea how to clean up such a mess. Maybe I will try this in another shooting. 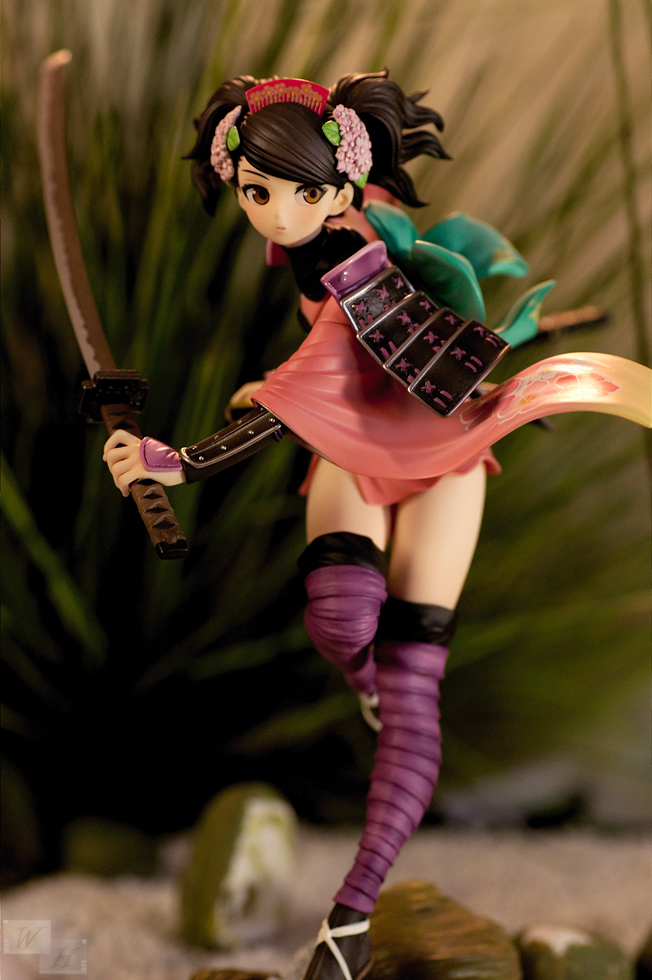 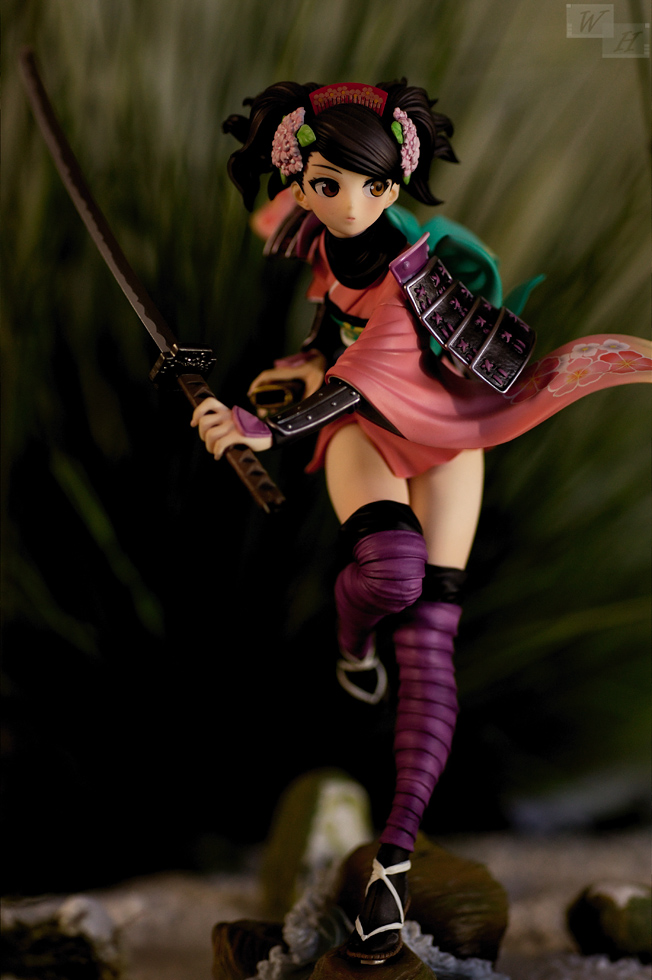 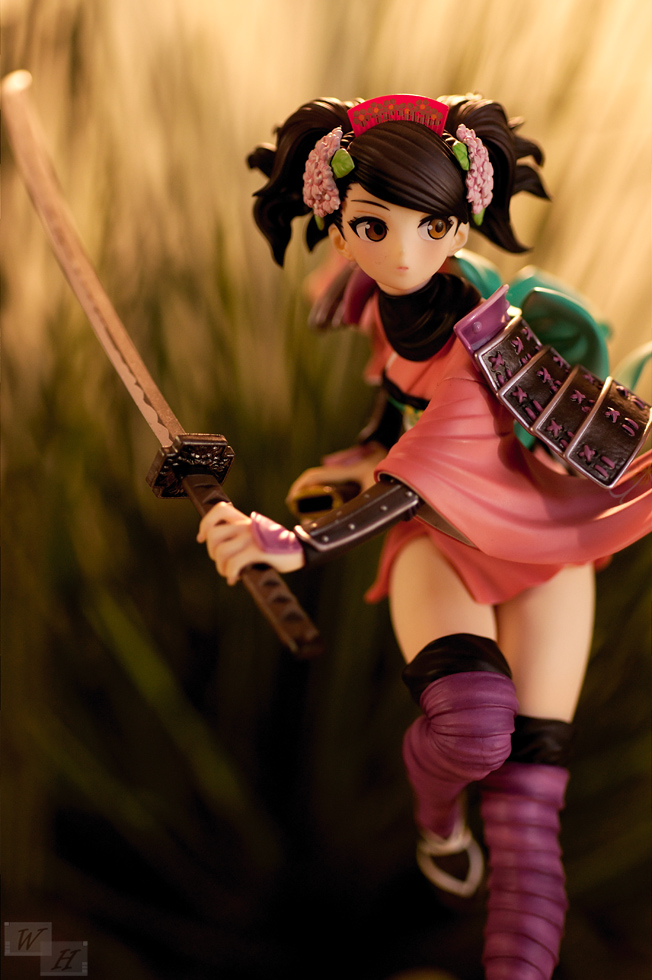 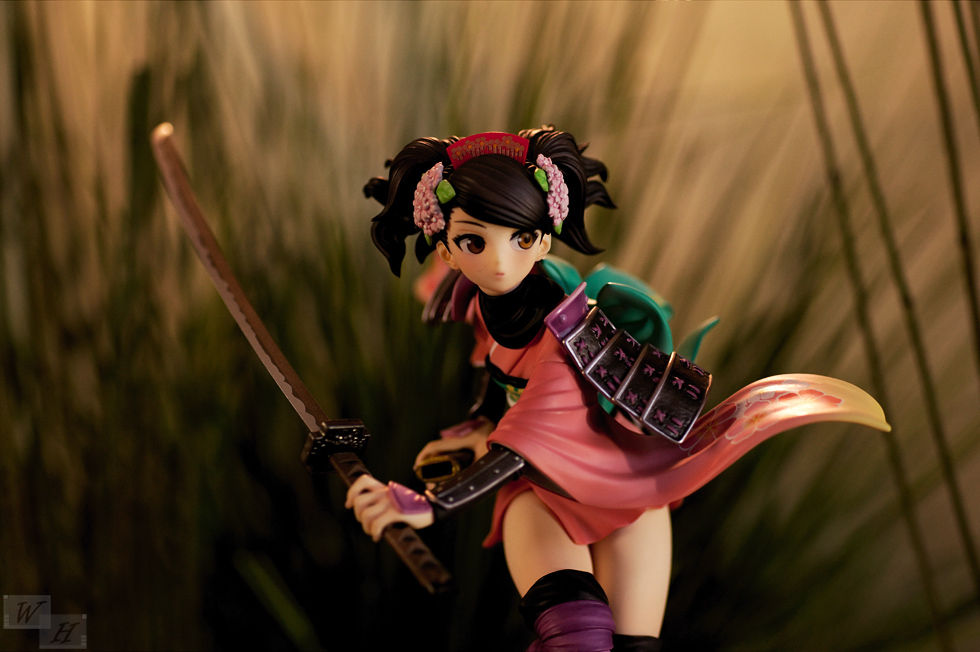 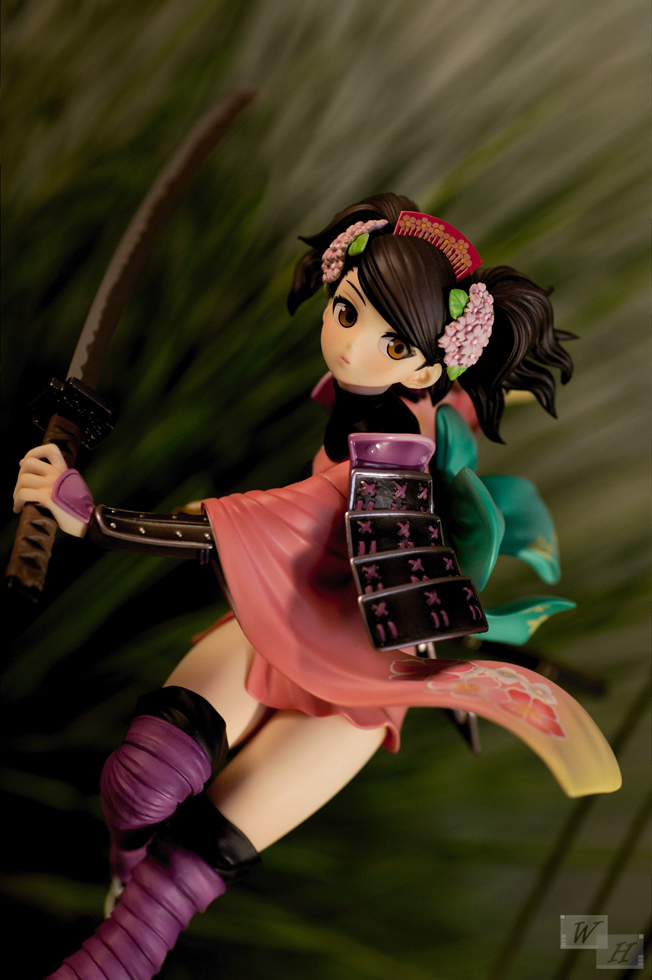 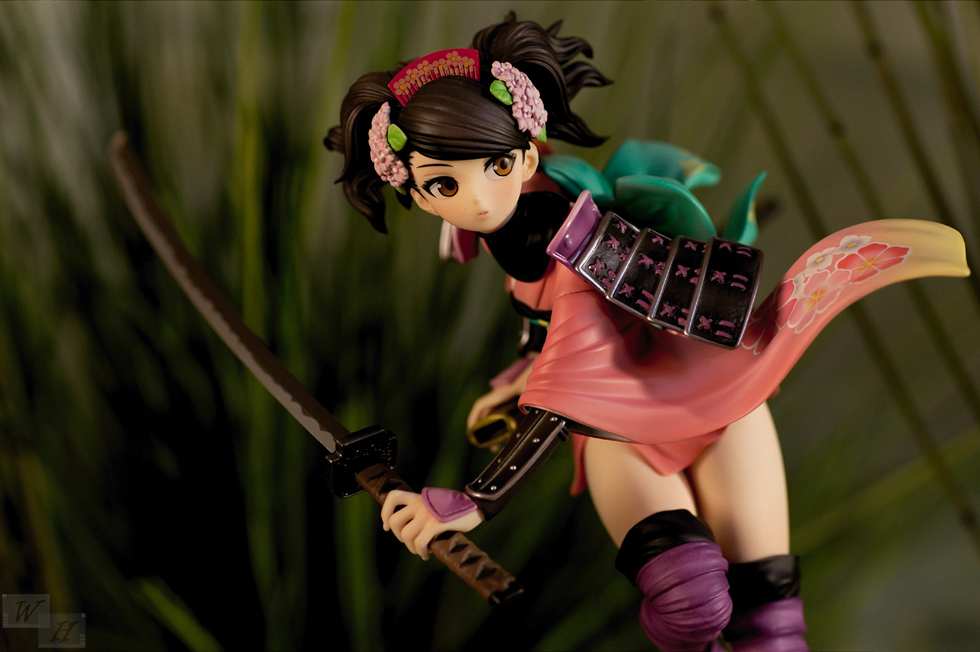