Todays review is about Kanbaru Suruga from the popular anime Bakemonogatari.

I was always interested in getting this certain figure, but I didn’t order her back in 2011,
the year she was released. With Senjougahara as spearhead most of GSC’s figures from the Bakemonogatari line – up are super popular and so the figures rise in price on the aftermarket. 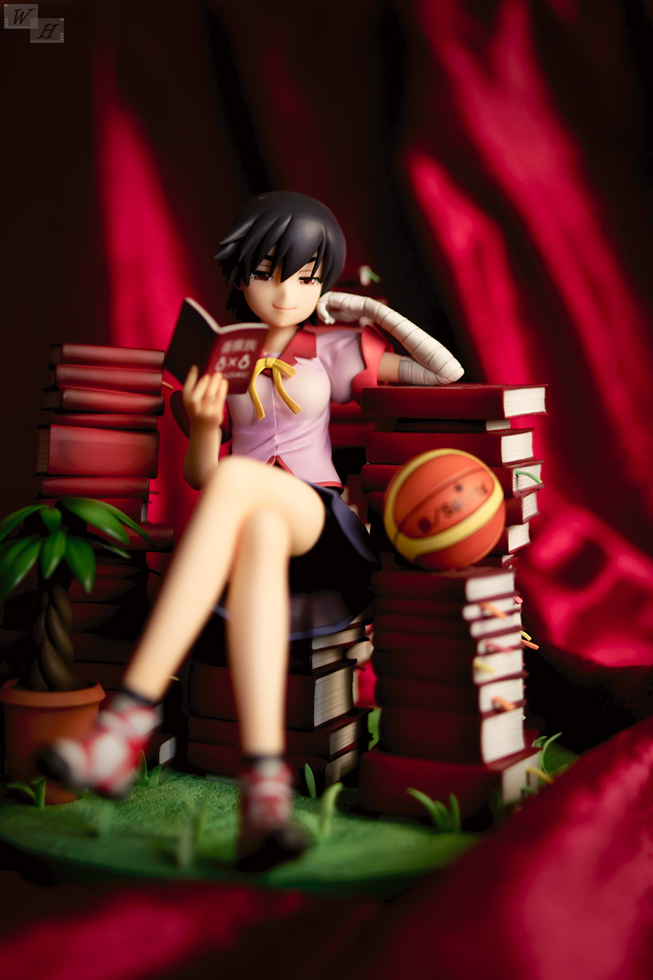 After a lot of thinking if I really wanted the Kanbaru figure, I couldn’t wait any longer and gort her from a friendly American, who never unpacked his Kanbaru. Not that I can really understand, but I’m happy that I got a new, unopened Kanbaru. I’ve recently seen what sick things some people do things with their figures, so I got a bit cautious of used figures :p 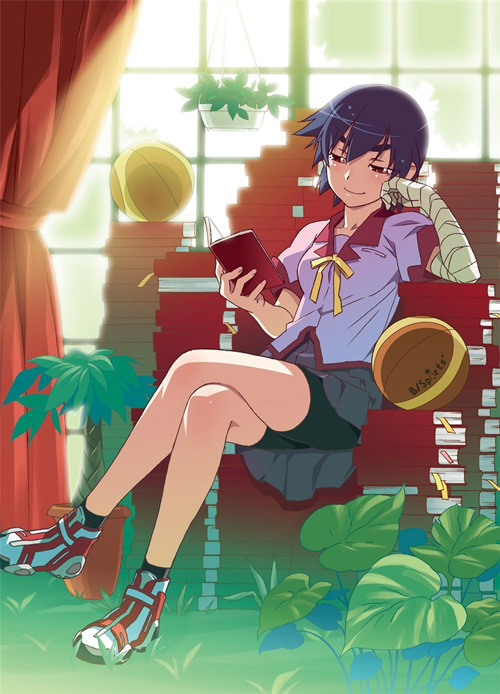 All of GSC’s Bakemonogatari figures are based on the Blu-Ray/DVD Covers, and Kanbaru is no exception, she’s an elaborate figure, Kanbaru has an impressive base, that shows her sitting in between towers of yaoi literature with an satisfied evil expression of a smile on her face.

In the anime Kanbaru is one of the girls the main character coincidentally mets. Kanbaru is actually into girls, even though she doesn’t bother to flirt with Araragi and reads yaoi related literature. She was a bit scary at first and I actually hated her for butchering Araragi, but in the Nadeko Snake story, she became a friendly girl, still a bit perverted, but likeable. She’s not that much focused on as others in the show, but Kanbaru definitely made an impression. 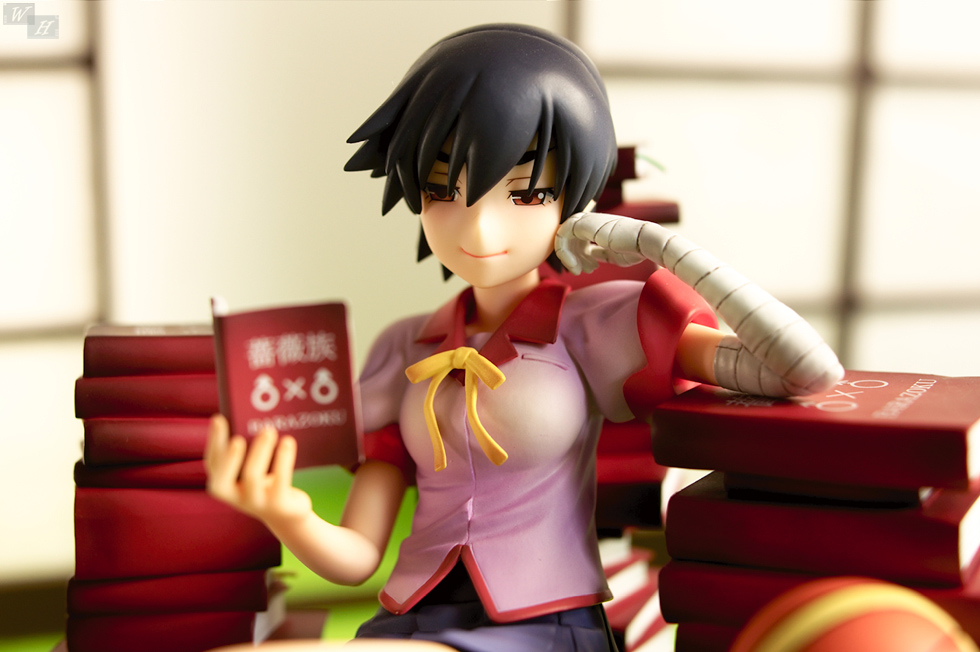 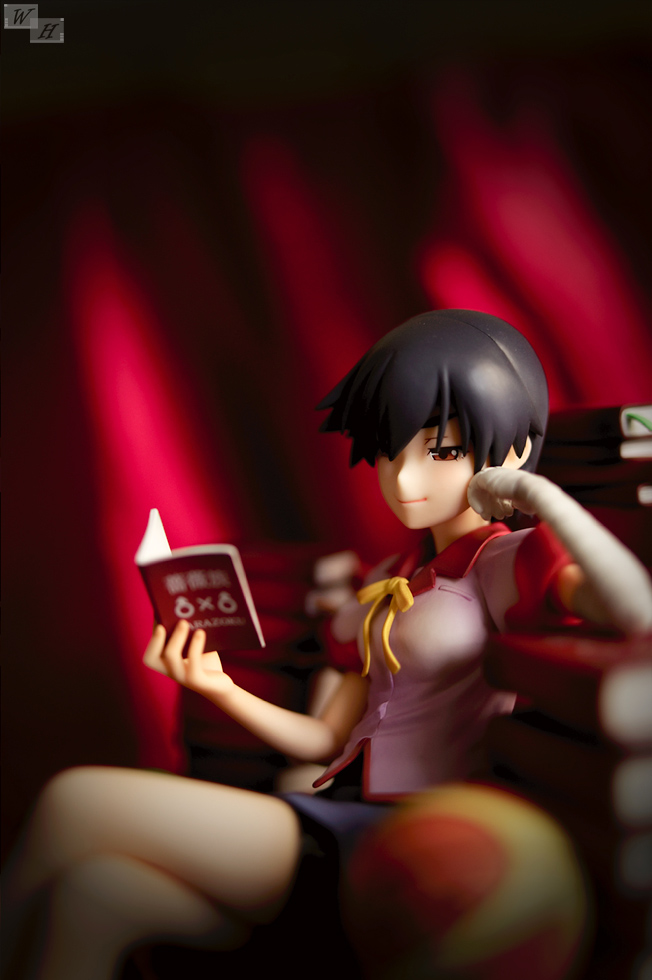 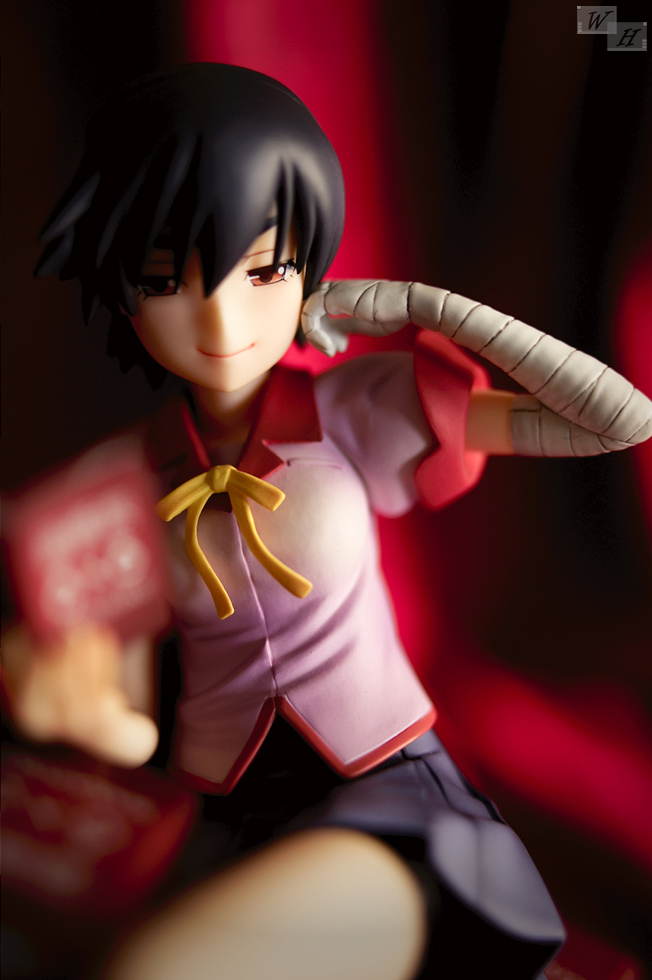 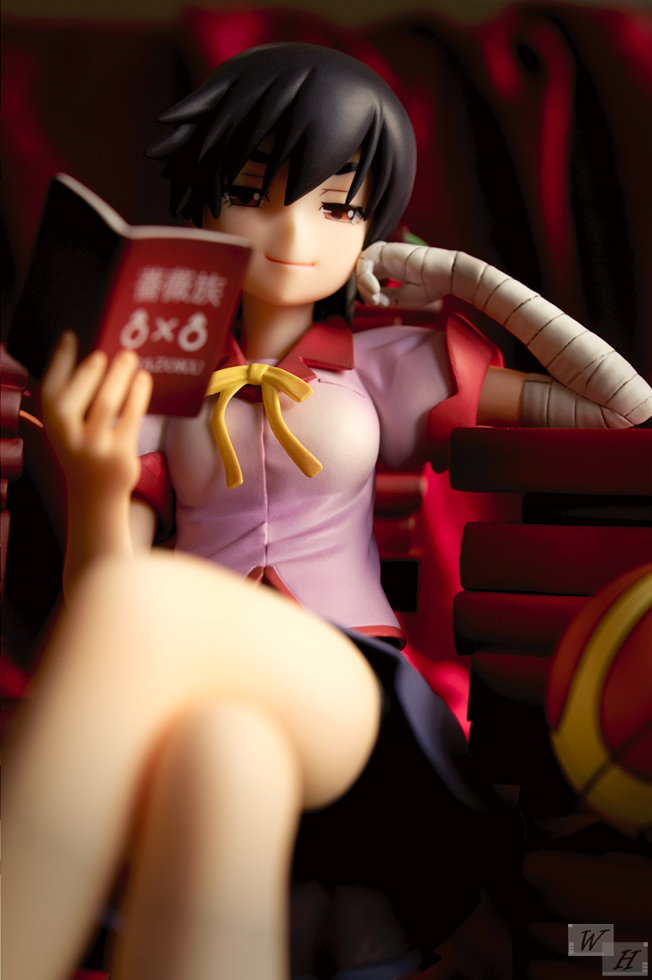 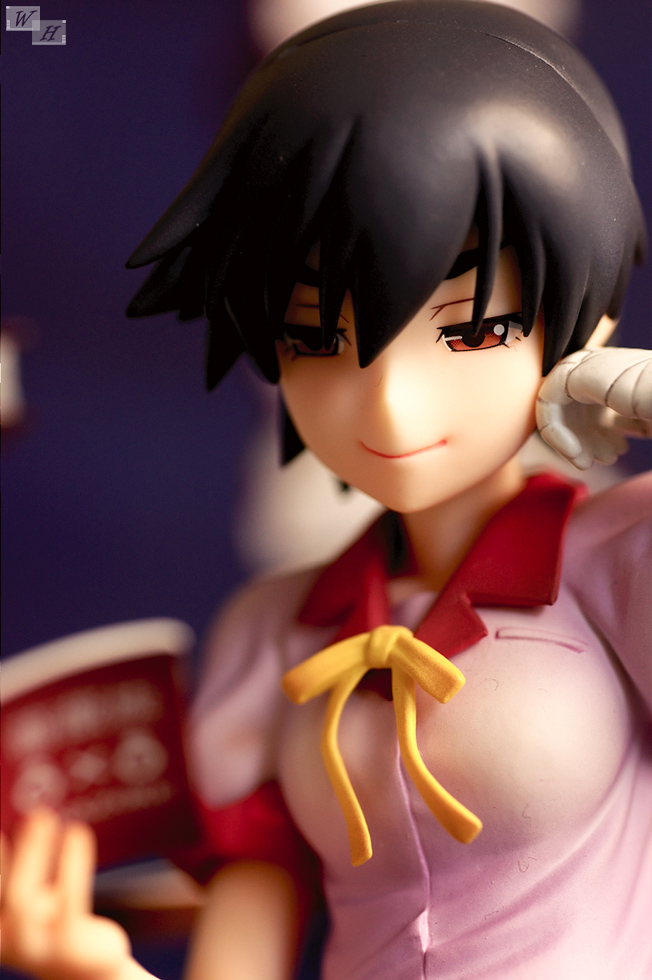 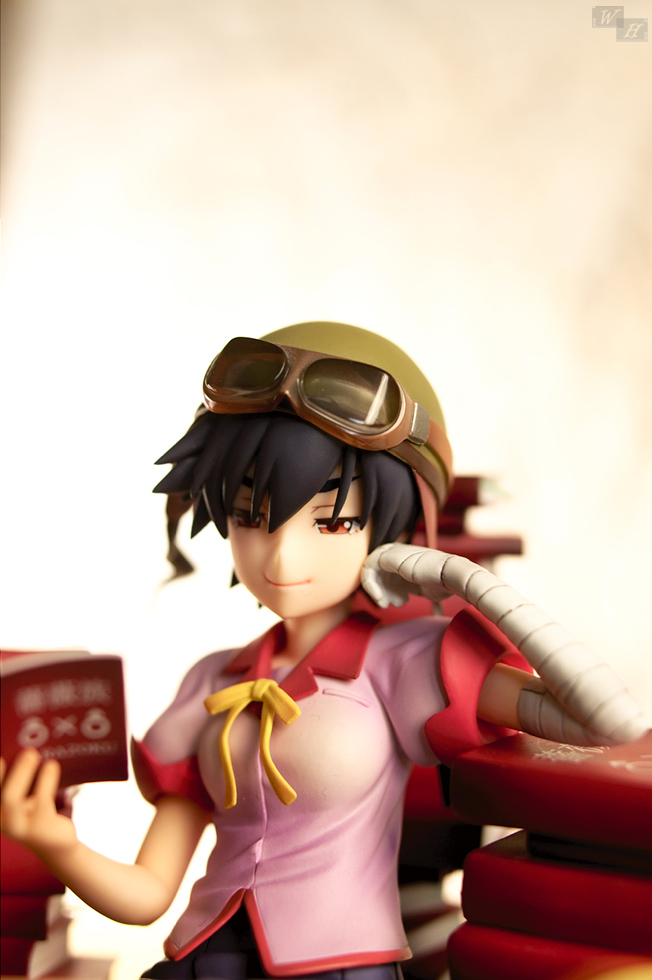 The figure has a tomboyish short hair style, it has rounded edges and is colored in dark with a blueish tint. A bit hidden underneath she has quite strong eyebrows. Kanbaru’s face has a nice tone and a soft looking shape. The half closed eyes create a nice expression and some kind of atmosphere, under her eyes some subtle color for the rosy cheeks has been applied like they are often shown in anime. On her mouth Kanbaru Suruga shows a satisfied wide smile, Im actually not a fan of GSC’s red lined mouths, but here it is rather acceptable and looks good.

The short hair with the bushy eyebrows and half closed eyes gives this  figure a kind of subtle wild sex appeal, I really like that about her. From the right her face looks best, from the left the stronger jaw and chin give her a slightly monkey like look, like in the art she is based on. 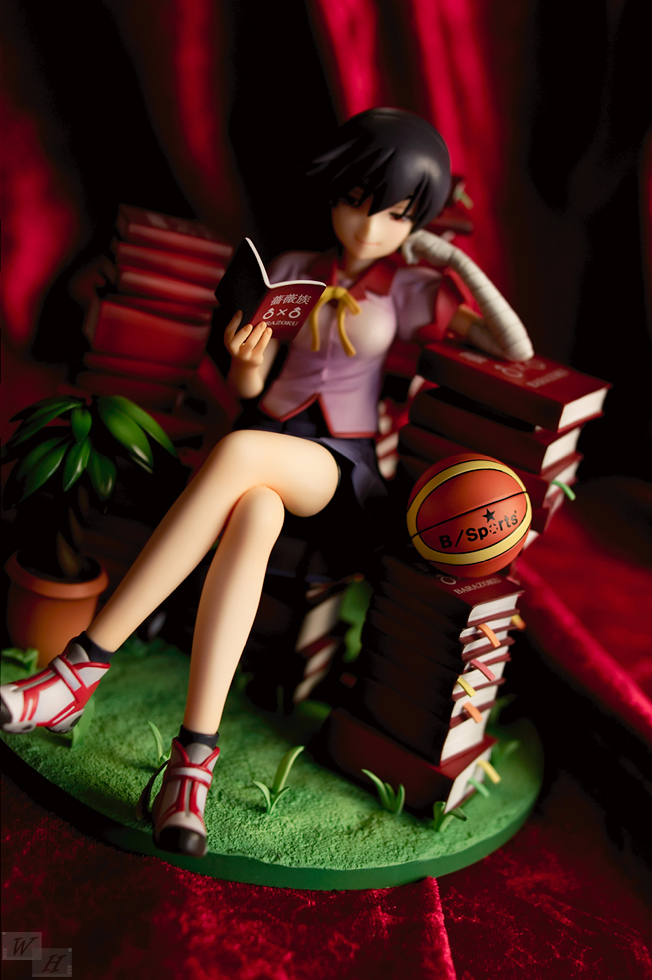 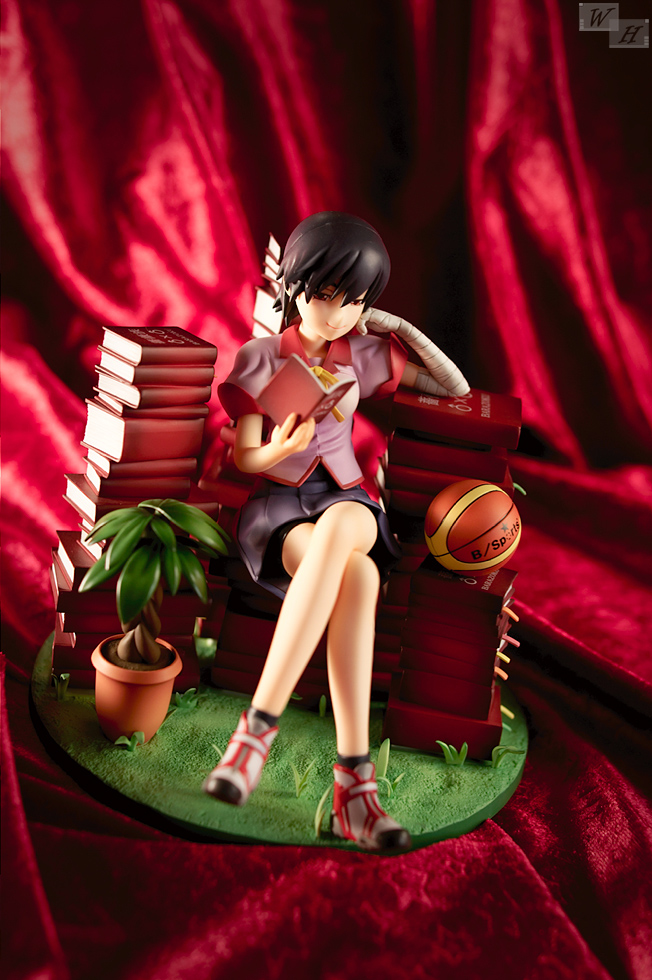 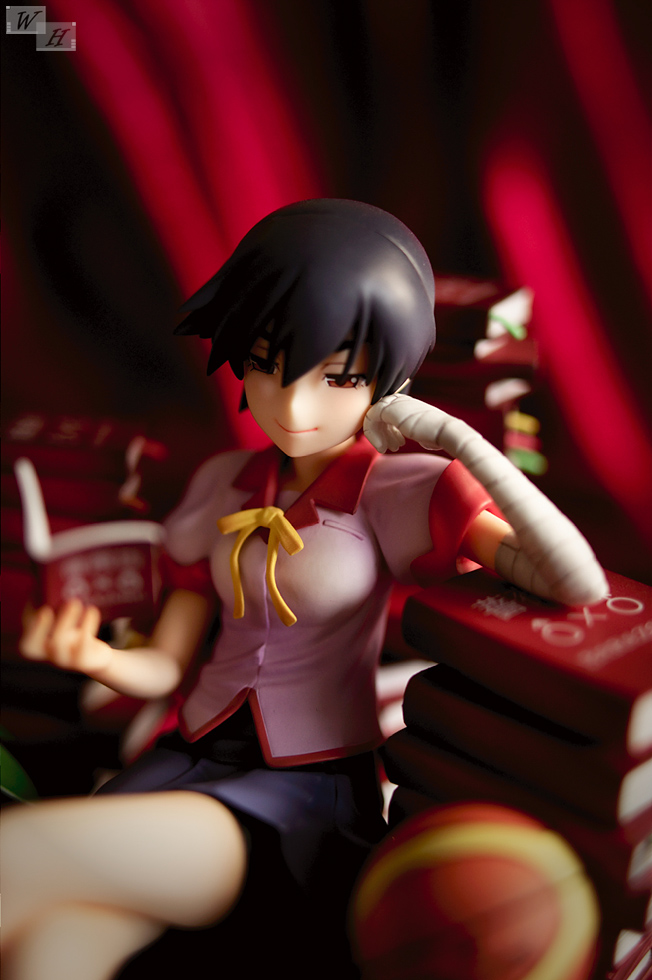 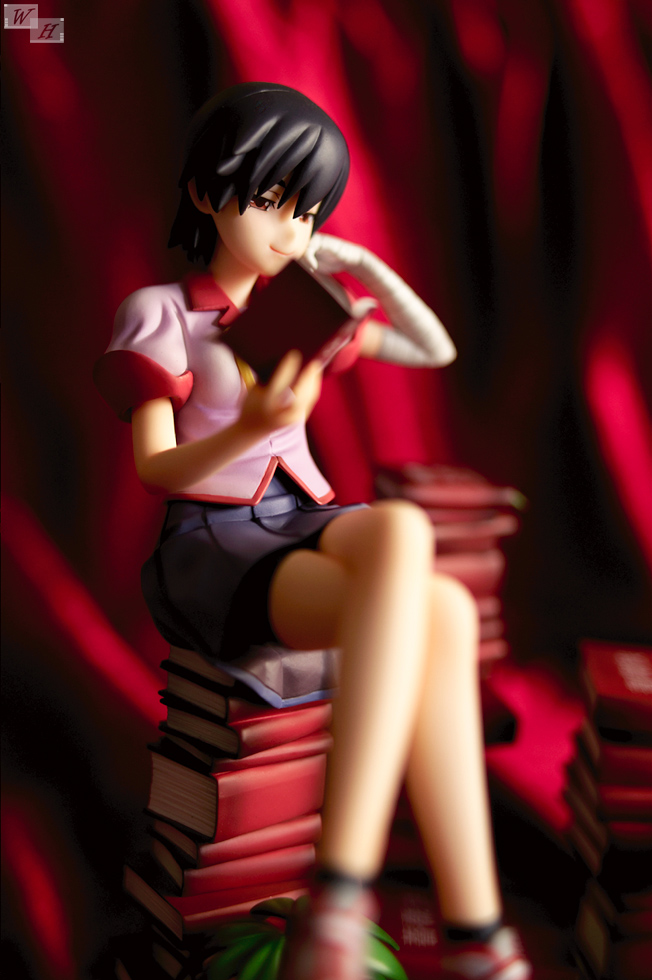 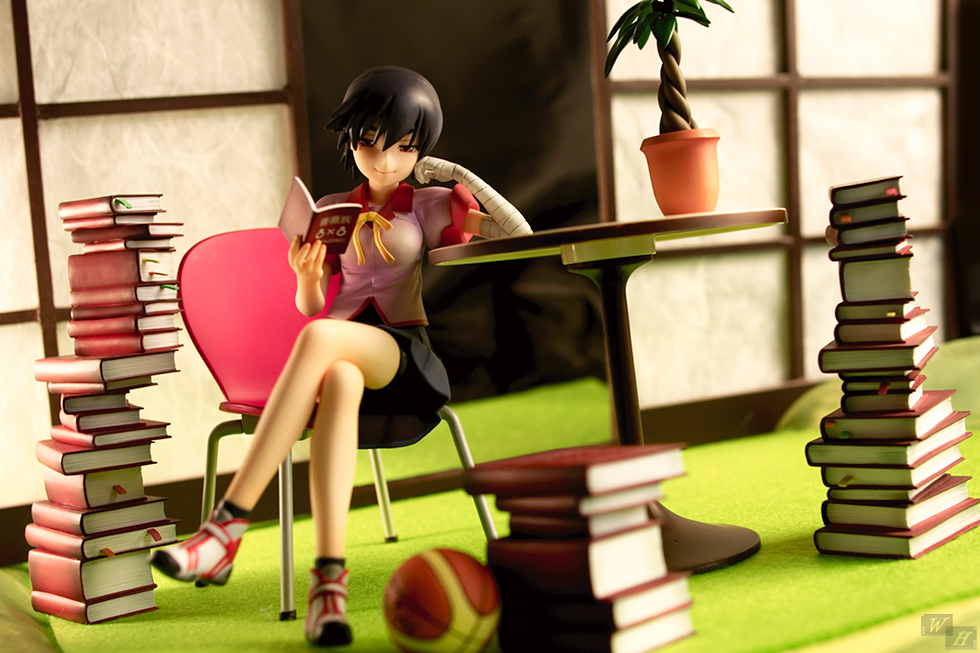 In contrast to the sexy look on her face Kanbaru’s outfit is the innocent standard uniform of her High School, like Hanekawa and Hitagi are wearing. Yeah it’s a summer uniform with some nice shading and realistic wrinkles, but it is nothing really fancy actually. Kanbaru has some extra details, like her bandaged arm or the basketball sport-shoes. Under the purple skirt she is wearing black biker shorts instead of panties.

The figure has a nicely articulated pose, she is sitting on her books in a very relaxed manner. It is cute how she supports her tilted head with one arm, the other arm with that she holds a book, these little fingers looks quite realistic with these joints. Ah yes the book isn’t fixed to her hand.

Kanbaru Suruga is a normal healthy High School girl, there are no parts on her body that stand out especially, maybe her chest is more developed than Hitagi’s. Sitting figures have their own appeal, in terms of display and photography options they offer many possibilities. In most cases such figures can be taken off their base and placed on different things or on different places. 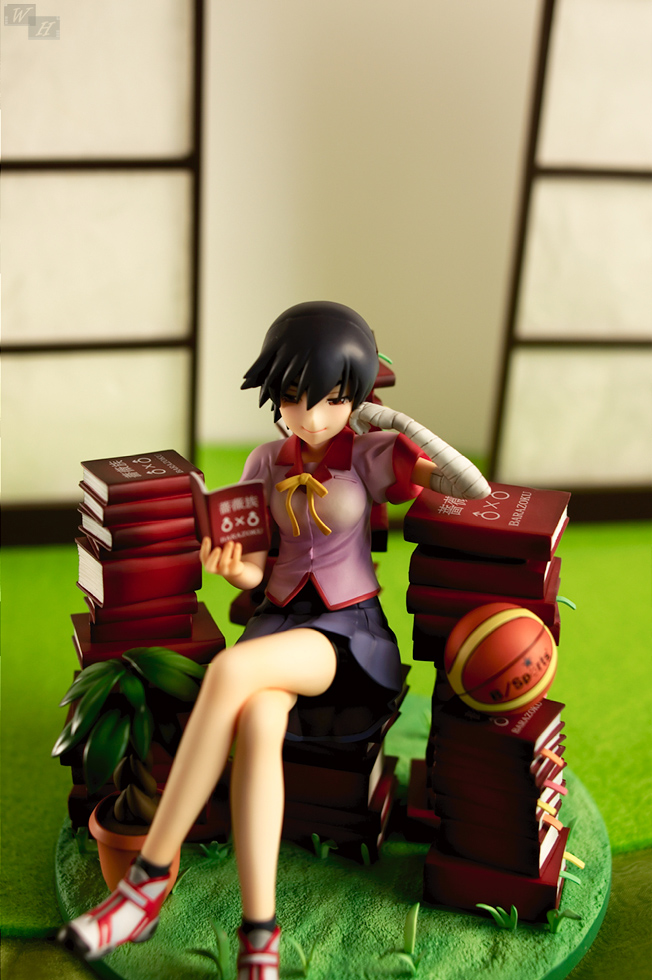 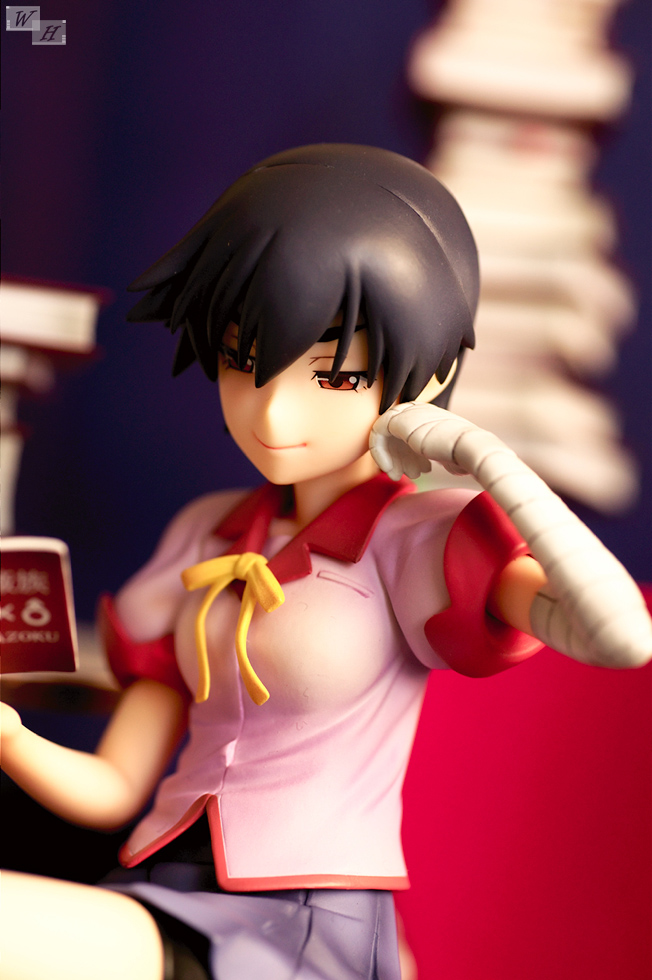 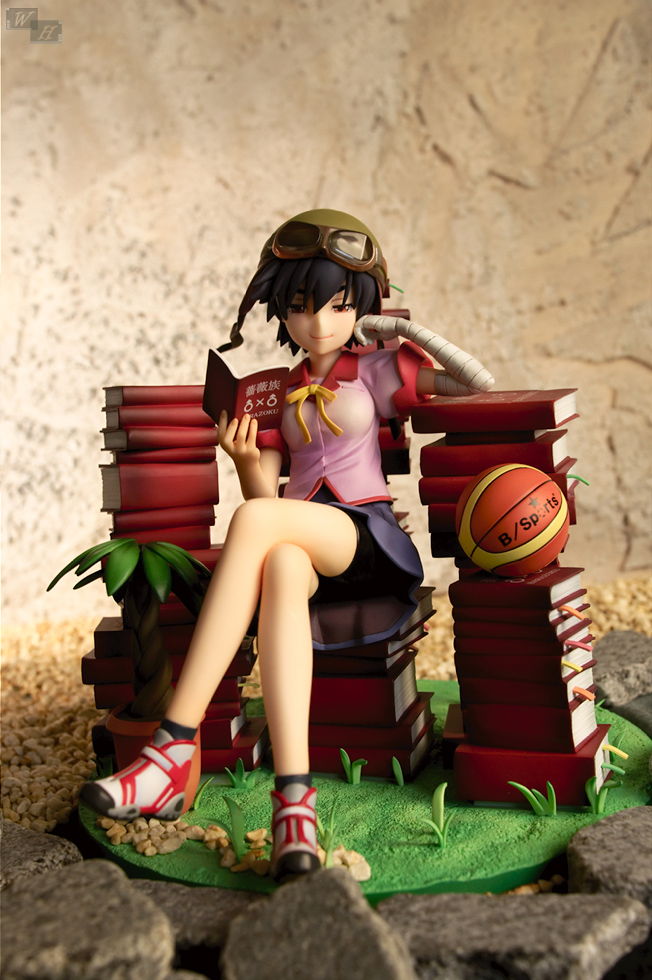 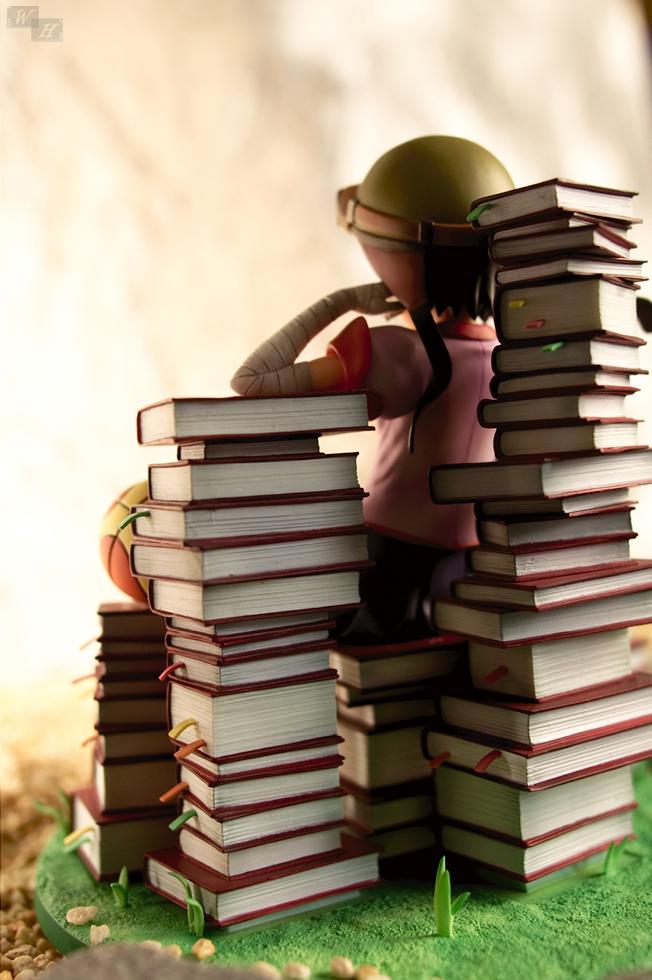 The base of this figure is quite awesome and elaborately made, it shows Kanbaru sitting on her throne of books on green floor which slightly resembles grass. It consist of five pillars and as little accesoires there is also a potted plant and a basketball, who find their place on the base.

The different sized books are very detailed with several bookmarks and clean transitions between the white pages and the cover. A cool figure on a cool base.

Kanbaru is a great figure, I should have made this purchase a lot earlier, but no I had to wait and payed the aftermarket price, I nevertheless think she’s worth the money. On first sight she might appear a bit unimposing on her quite elaborate throne of books, but the interesting pose and cute ,bold face expession are something that make her special. This is no T & A figure, but it’s something really nice to be put on ones shelf. Im quite satisfied with Kanbaru chan and her pretty face, she’s actually nearly as nice as Oshino Shinobu (that I bought on release *u*).

Adapting  Blu-Ray/DVD covers into figures can be a great idea, the Bakemonogatari line up was quite succesful as a whole, but sometimes it works less good, which can partially be said about the Mahou Shoujo Madoka★Magica figures, who stayed a little behind the expectations. 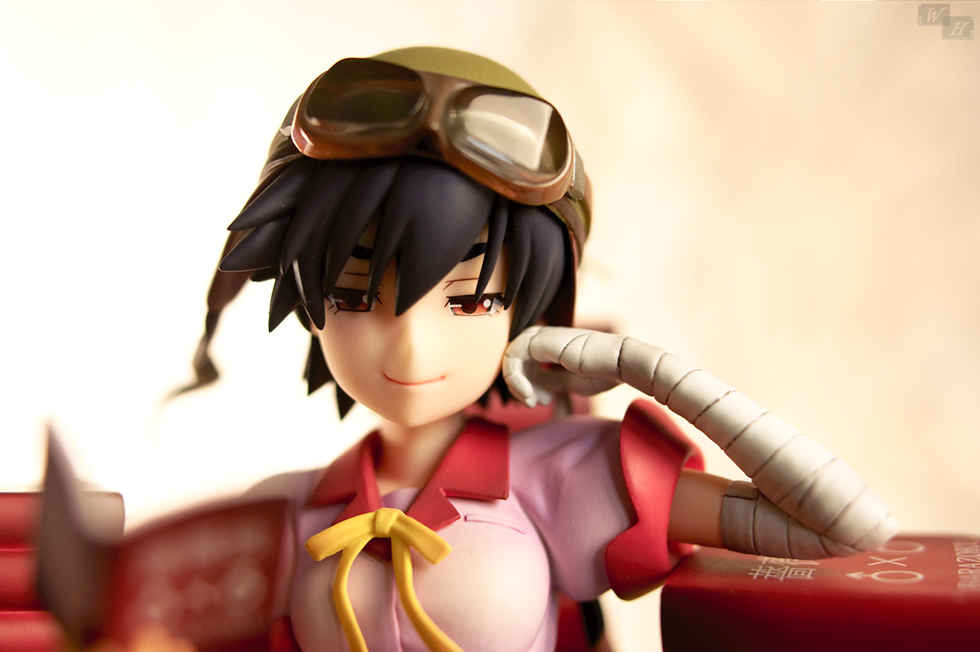 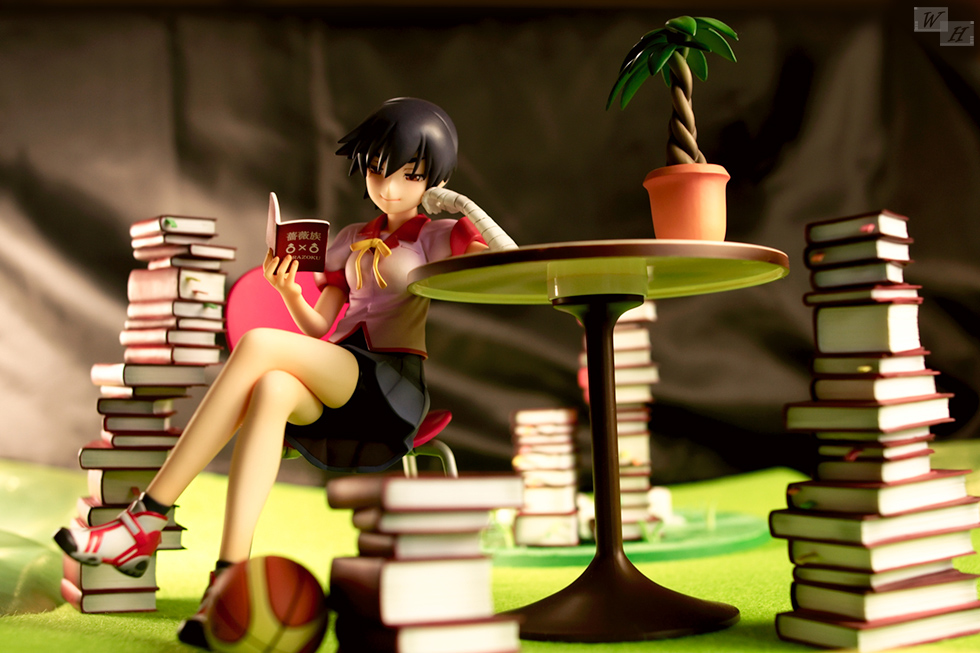 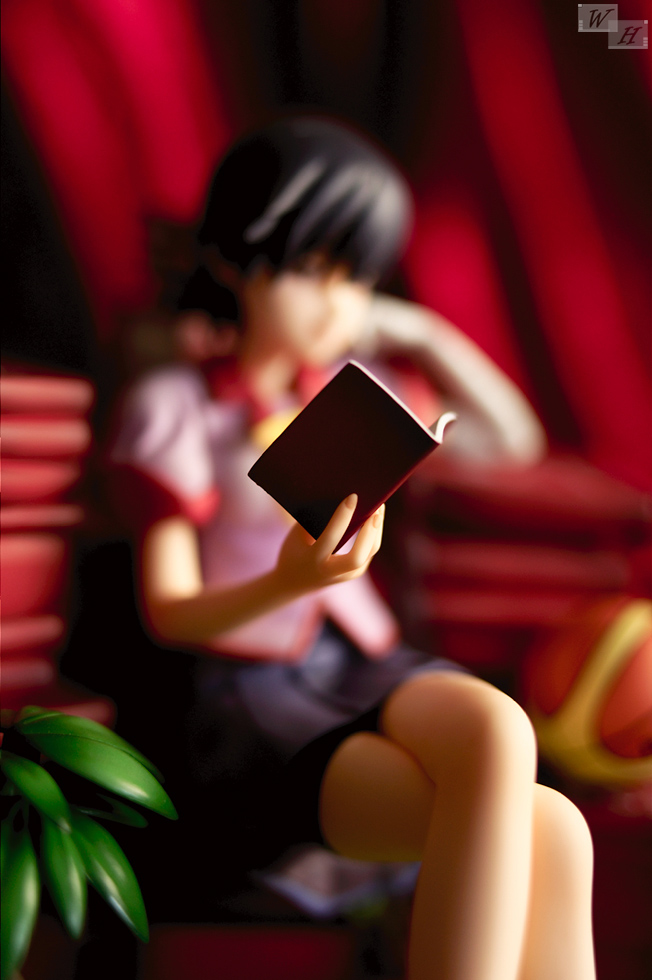 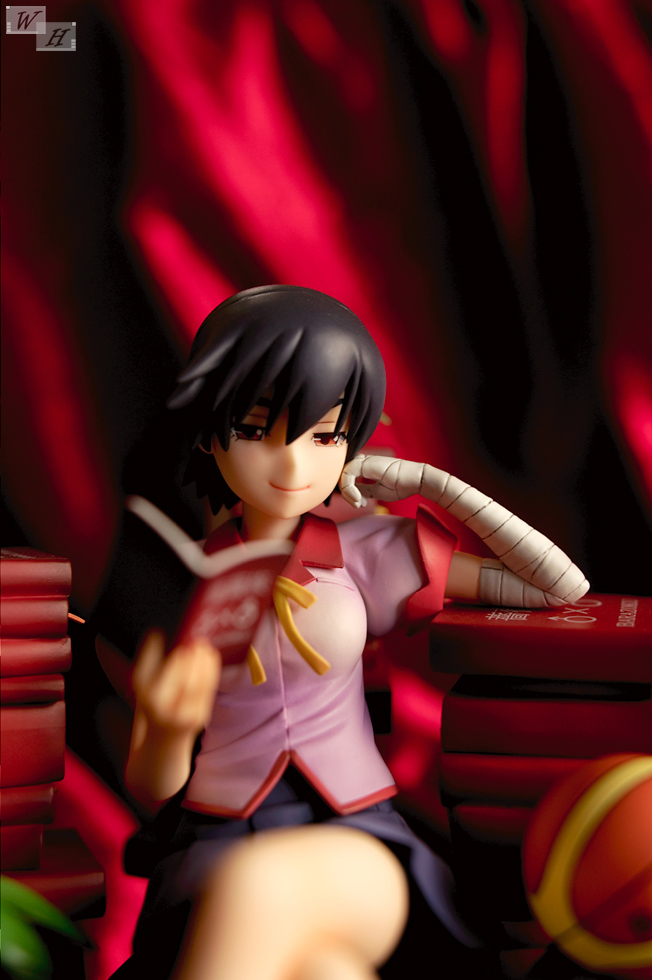 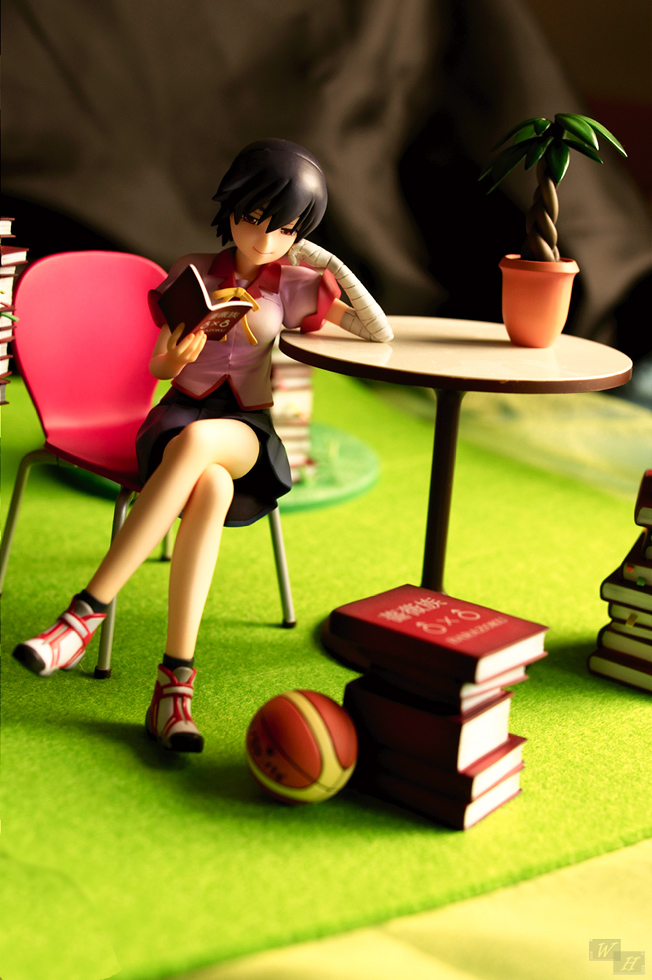 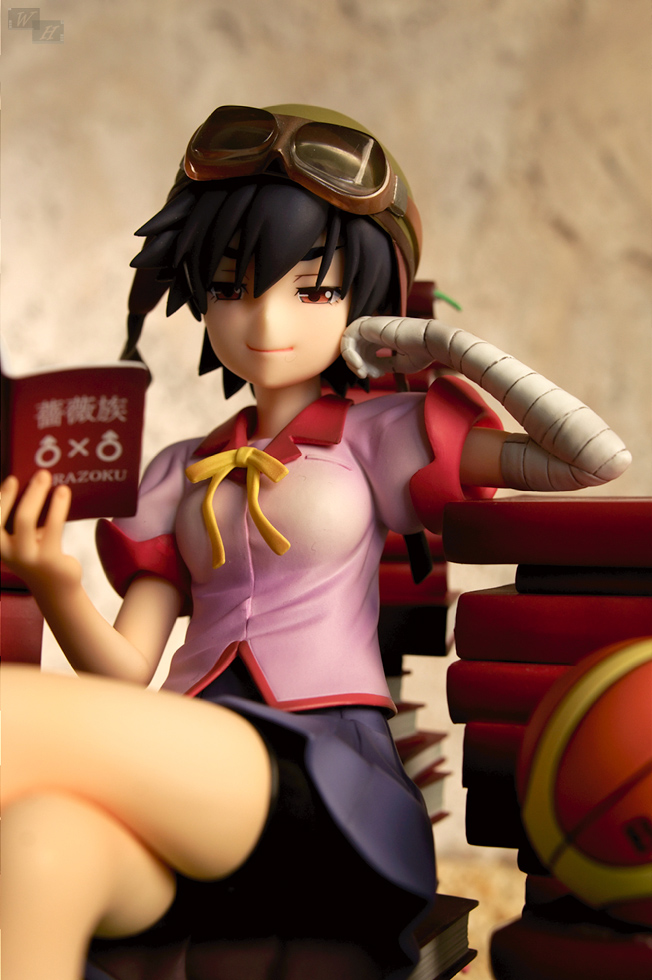 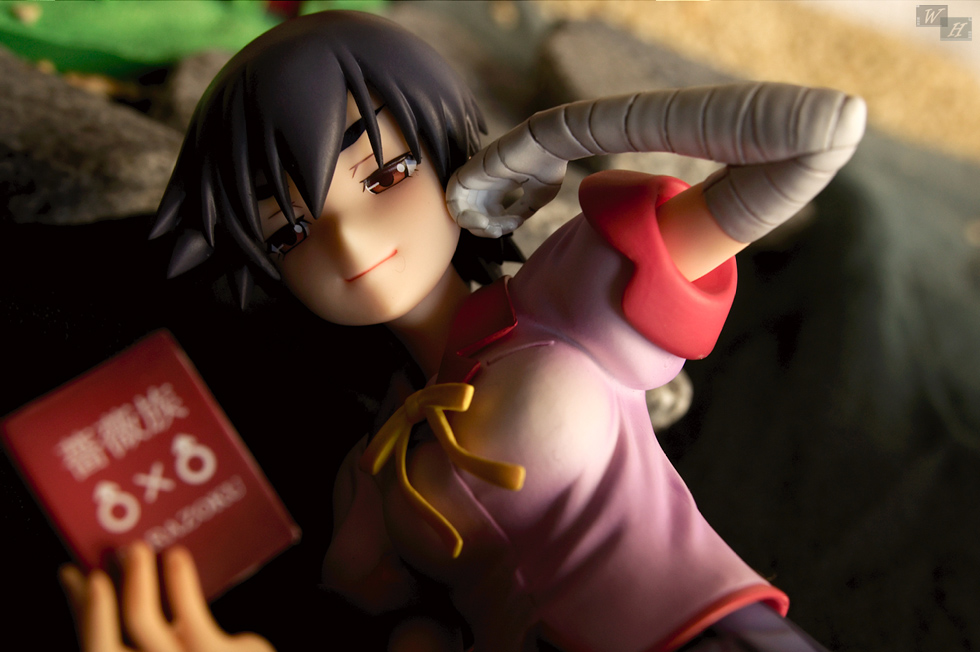 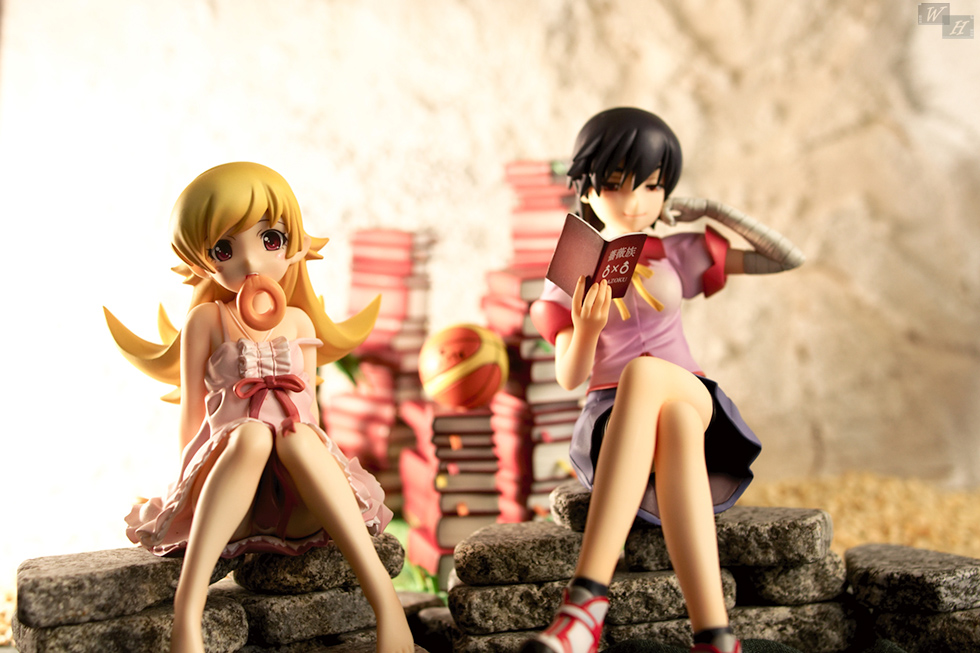