Hello, today let’s talk about Garage Kits, GK in short. I was always fascinated by GK’s in general they look more creative and elaborate than PVC figures , when done by professionals.

The regular PVC figure buyer won’t be able to create the best results, speaking for myself. I built tanks, helicopters and mechs in the past, but thats a lot different from assembling and painting bishoujo characters, I actually made a little chibi GK of Dead Master last year on my own and it was a pain and the result was so so. I still have Kannagi’s heroine Nagi as unfinished GK at home.

Now I know for sure that I can’t build her, I already contacted an professional GK  service, but what prevented me from sending Nagi in, was 1st the high price and 2nd the fear of being not satisfied with the final figure. I should really think about it again, since it’s a really beautiful GK.
... 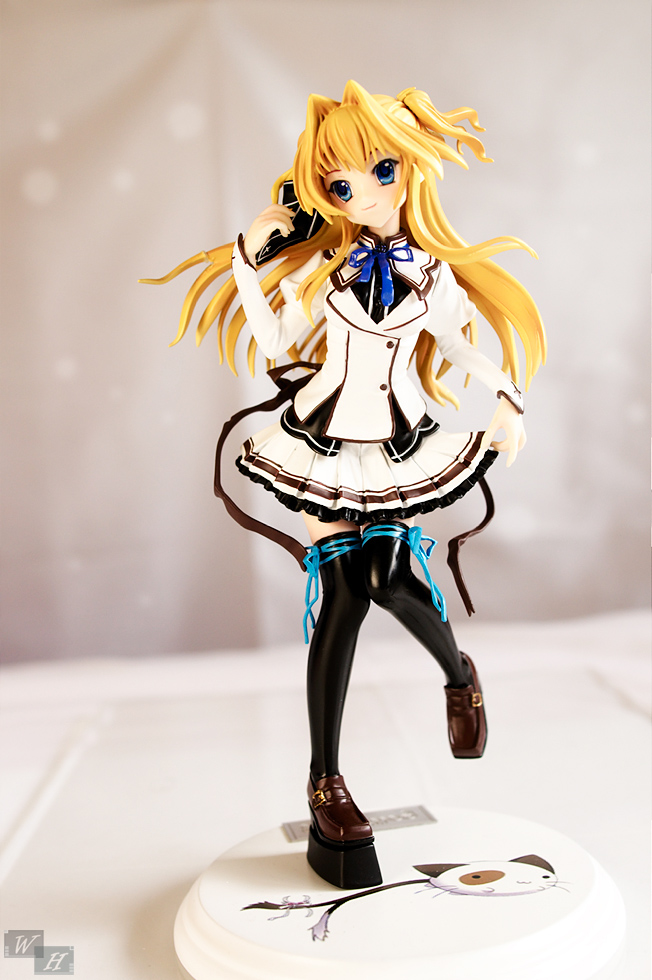 Here the little Anime special with Airi, she’s a little tsundere, who wants a hug.

Anyway this post is about Sena Airi from the VN and anime Mashiro iro Symphony.

I always wanted the GK of her, the first time I noticed this certain figure was at a Wonderfestival of 2010 and the wanted GK was sold as Exclusive GK on Volks online shop on the 27 April 2010. I used the help of a proxy service, but in the end I wasn’t able to make my order since it was sold out within a few minutes, what a straight defeat. This always bothered me, but a few years later I should get my chance. In the middle of December 2012 I secured my preorder at E2046 as their partner Company, Gathering offered the pre painted and assembled GK for a fair price. 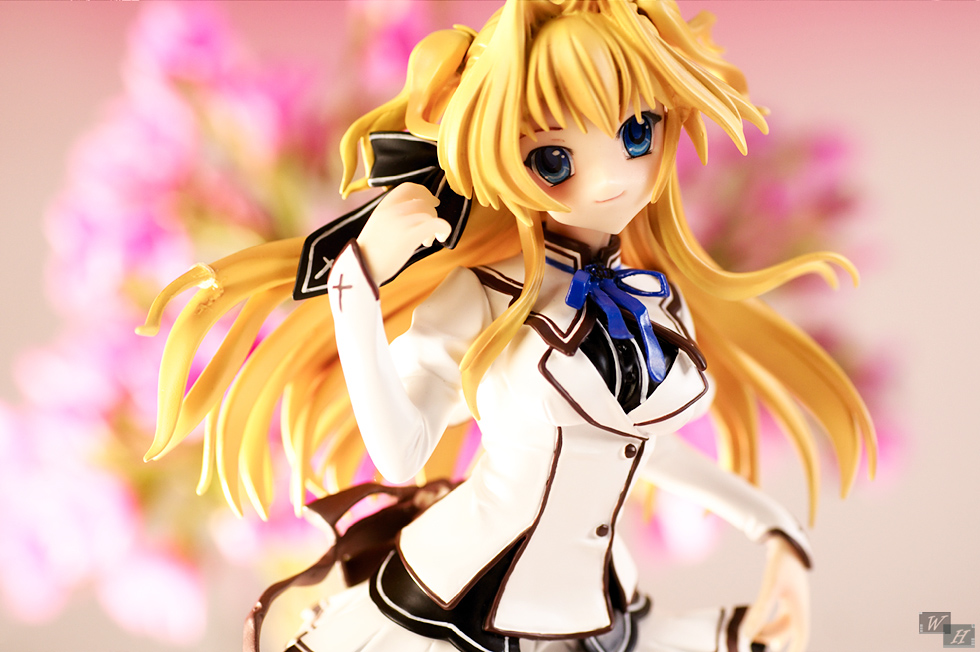 There is always the term bootleg in combination with GK figures from E2046, they are recasting GK kits from artists and sell them through their shop. It’s a n exhausting discussion if it’s legal or not, but so far no one seemed to sue them so why should I care. E2046 offers are an easy way to get your desired Kits, way easier than searching, contacting  the artist and aquirering the original GK . So I say: if you don’t make it accesible for me I’ll get it somewhere else!

This GK is recast from the kit of the artist Milchestrasse which was made in April 2010.
As mass produced small batch series, Gathering offered the Sena Airi GK for around 131$ . 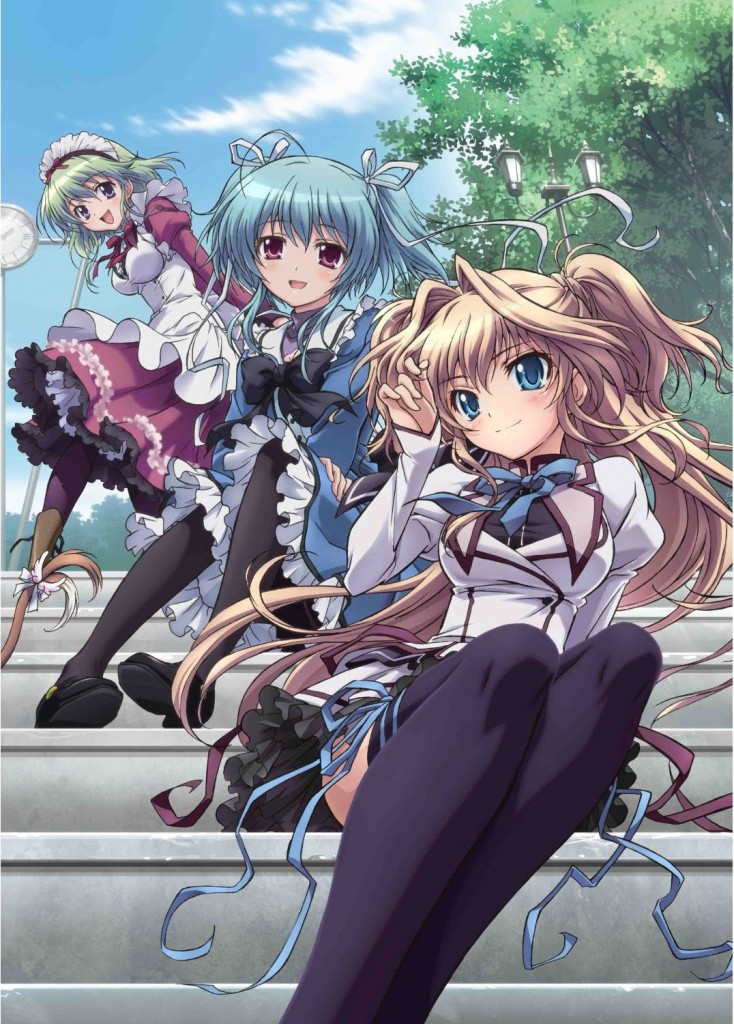 The origin of Sena Airi is the Visual Novel Mashiroiro Symphony: Love is pure white, it had exceptional cute and appealing graphics and a lovely school uniform design. I played a bit of the untranslated game and later the game got an anime adaption. Sena Airi actually was the lead girl in the game, a proud girl from a rich family who pursued the rough way of independence. In the anime they surprisingly choose another girl to win the “love race” for the main character.

First look at a GK figure 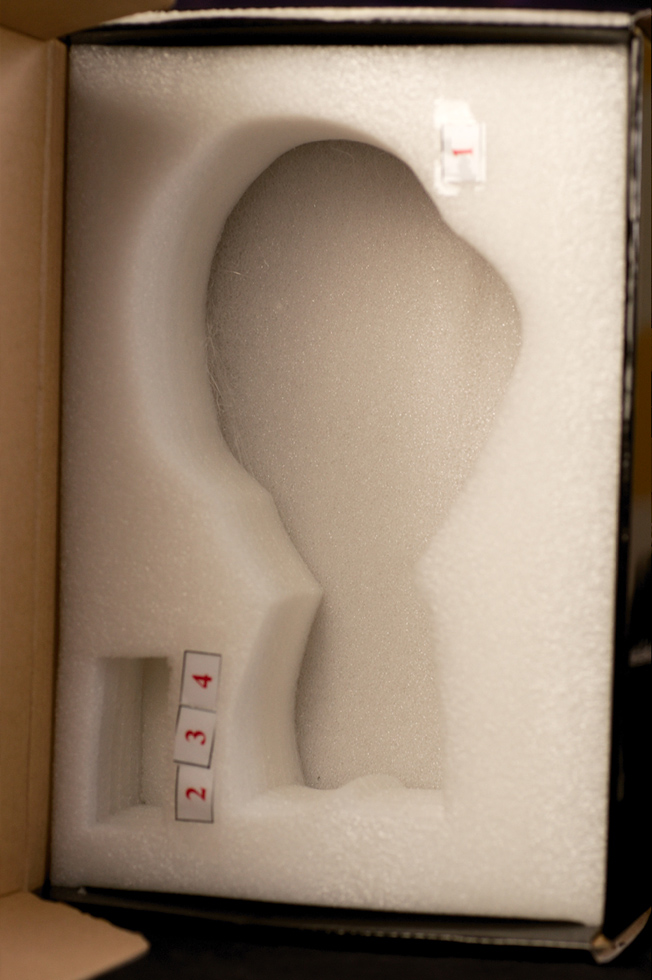 GK’s are made of resin, which is not as flexible as PVC and so it can happen that they take some damage during the shipment. Sena Airi was packed with care in a especially cut out foam to prevent her from damage, but unfortunately she arrived not completely intact. The big ribbon at her back broke off and one strand of her outer hair snapped. Since the place where the ribbon belongs is hard to reach and the strand broke off in a very noticeable area it was pretty annoying to receive the figure with hard to repair damages. Do you know good resin glue?

Furthermore the GK figure requires some minor assembly, the blue ribbon, the right bush of hair have to be put in place and the figure has to be placed on her wooden base, these are just simple thhings to do before the figure is ready to be displayed. Since Im scared of damaging her during dusting, I rather buy a small glass cabinet soon and make a little Diorama. 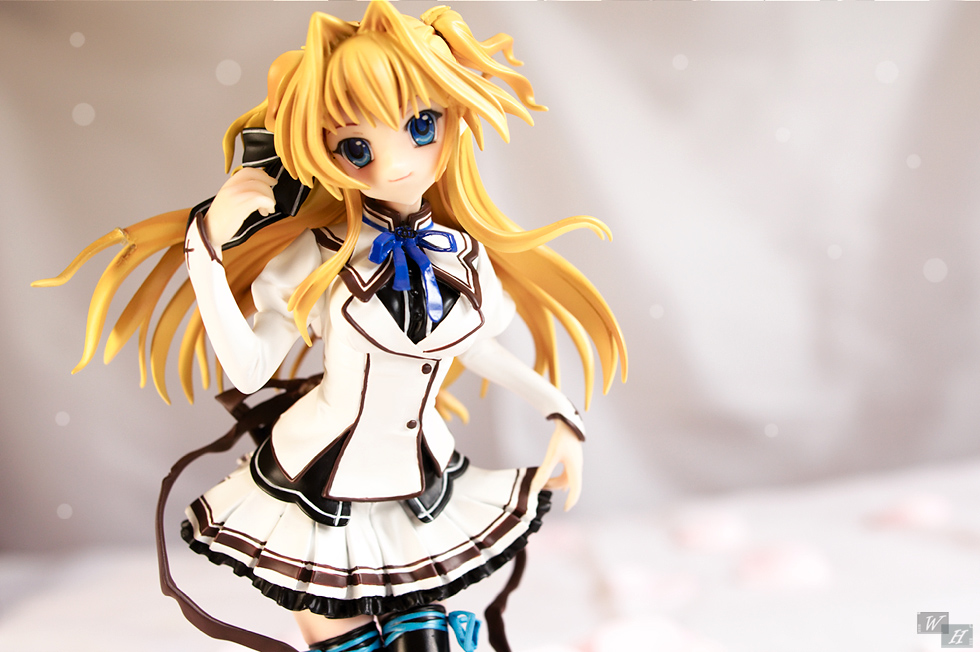 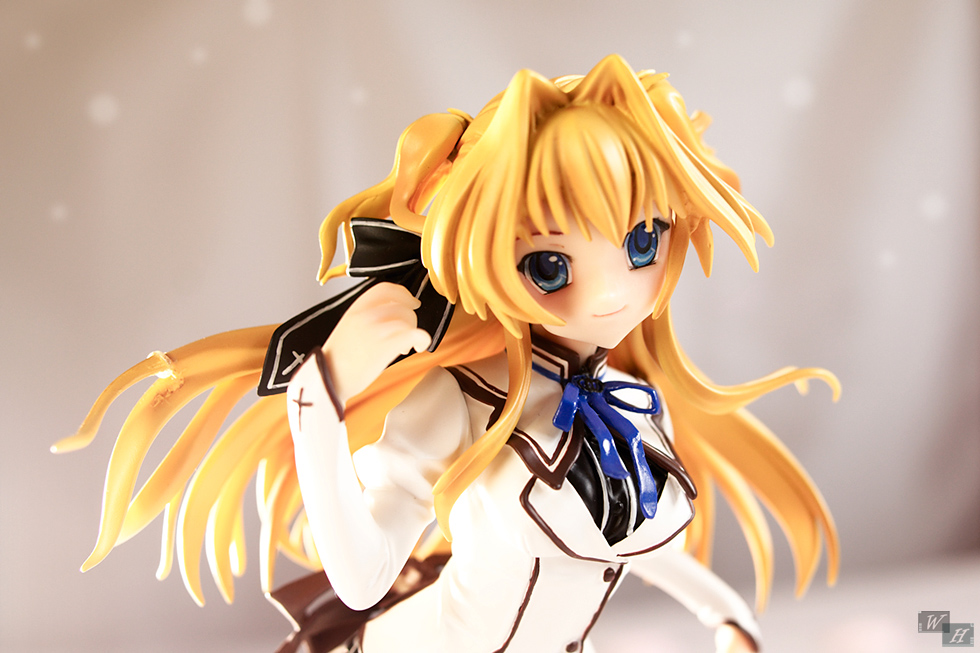 This Sena Airi is a regular sized 1/8 scaled figure with 21 cm of height she fits very well other figures of this scale without odd height differences. On first look Airi has a lovely presence thanks to her bright uniform and flowing long hair, lets find out more in the next paragraphs. 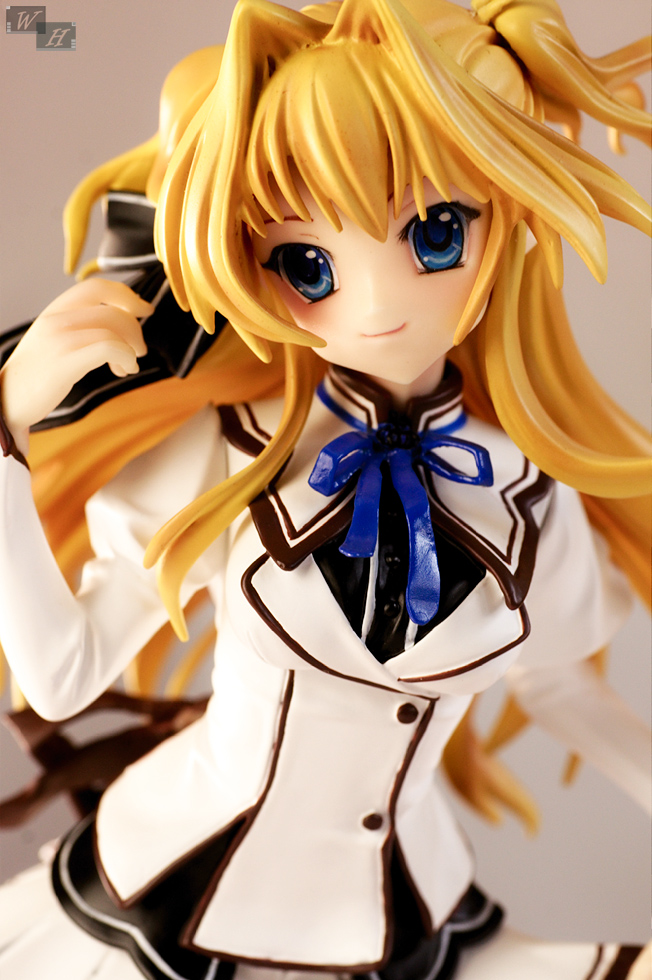 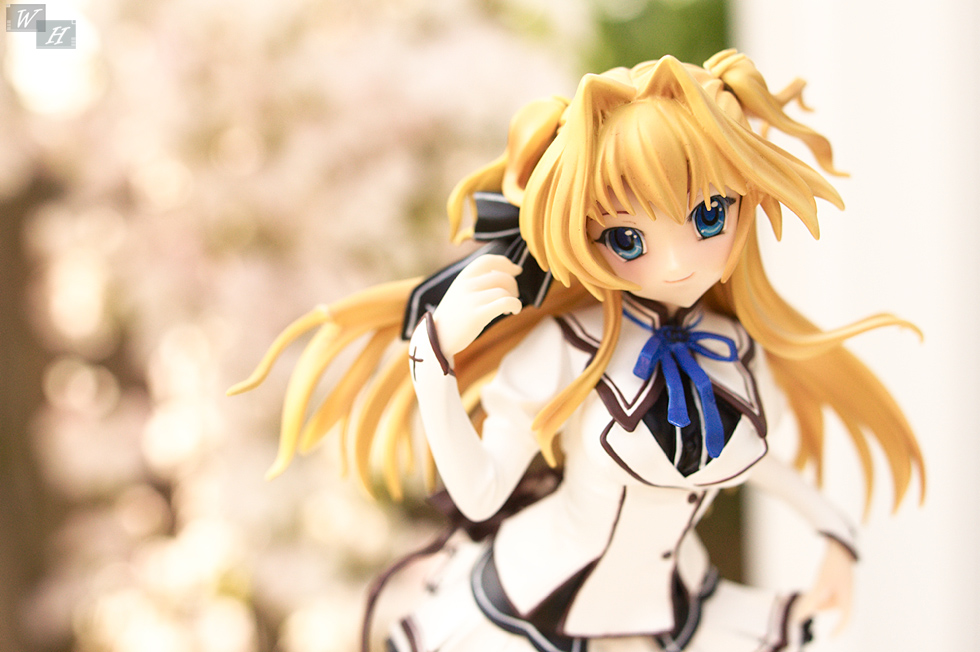 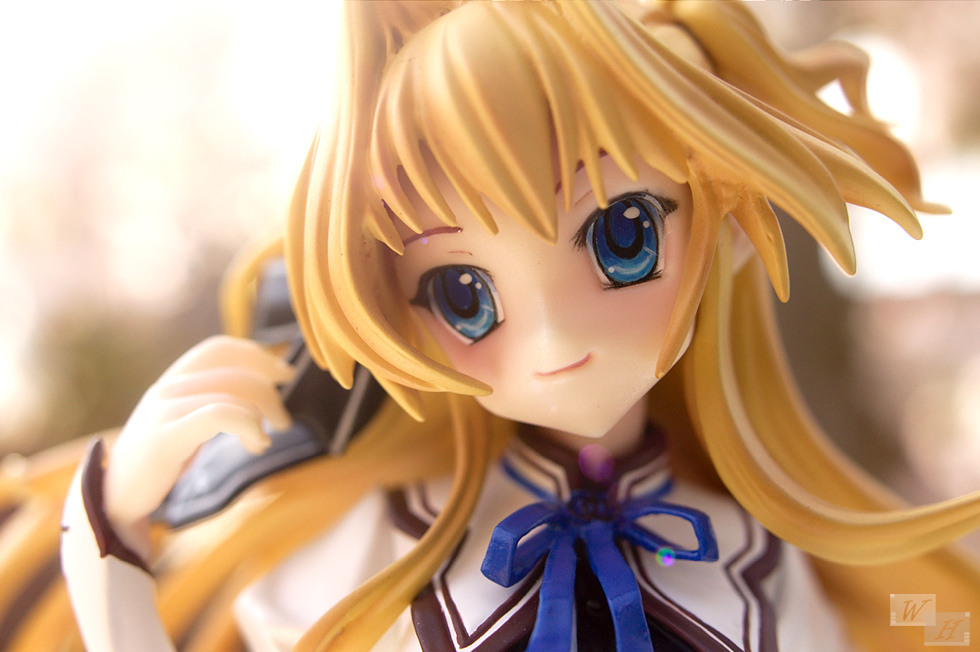 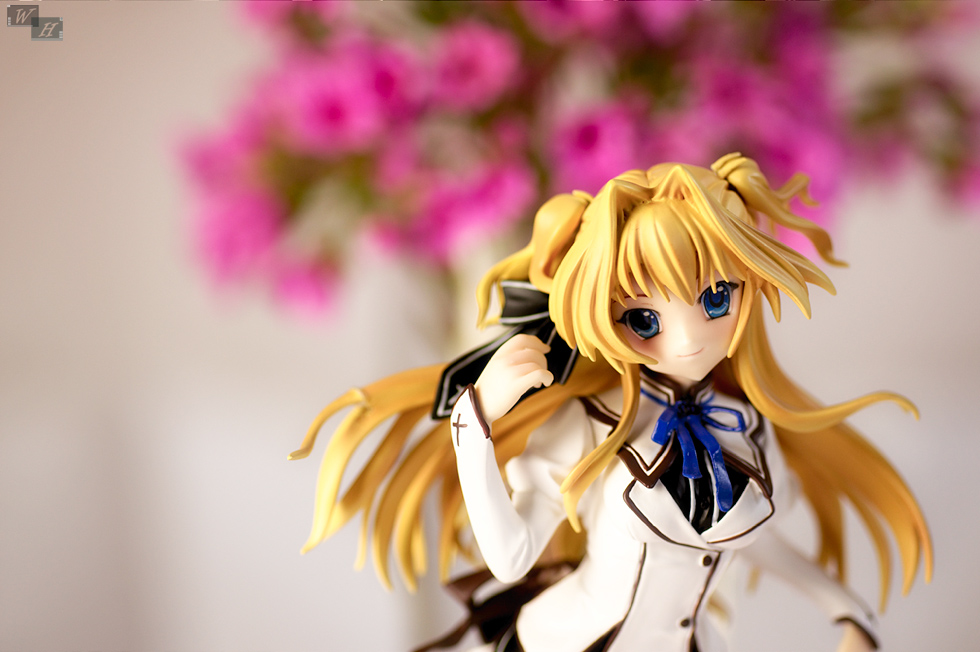 Aside from my ugly provisonal glue mark, the figure has cleanly sculpted hair with a number of single strands. The haircolor turned out a bit more yellow compared to her hair color that she had in the VN, it still looks very nice, the applied brown shading does a good job in that regard.

Actually I was super scared that the face turned out bad, since the face is the most important part on a figure for me. I nearly had nightmares shortly before she arrived here. The more surprised was I when I carefully opened the box. She has a beautiful face to be honest with beautiful, detailed eye decals and subtle applied rosy cheeks. Her lined mouth shows a subtle smile that gives her face a kind expression. Even though the material is different Airi’s skintone and texture doesn’t look much different  from PVC figures, maybe a little smoother actually. 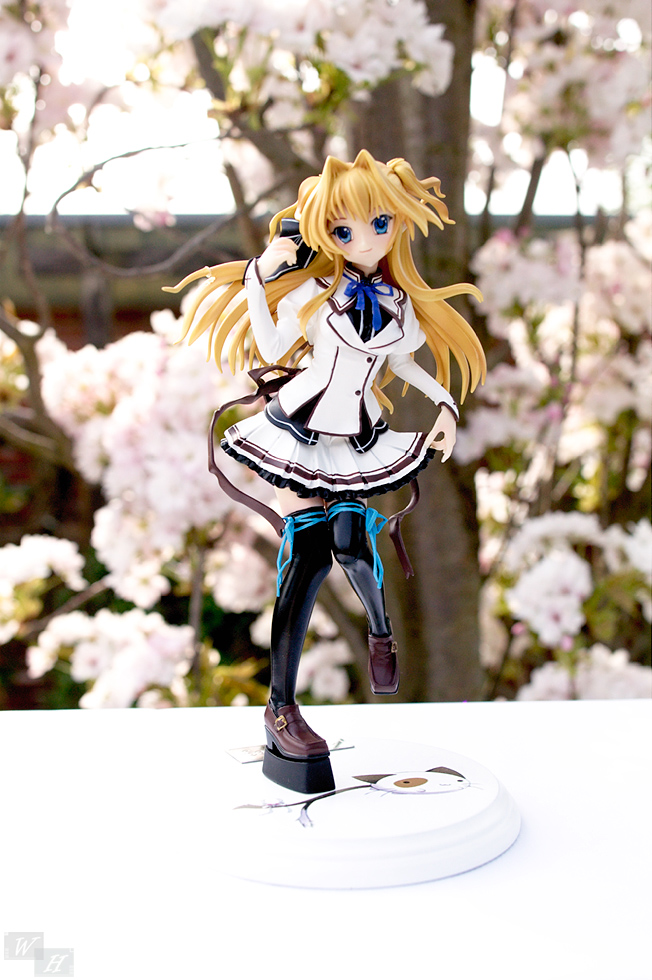 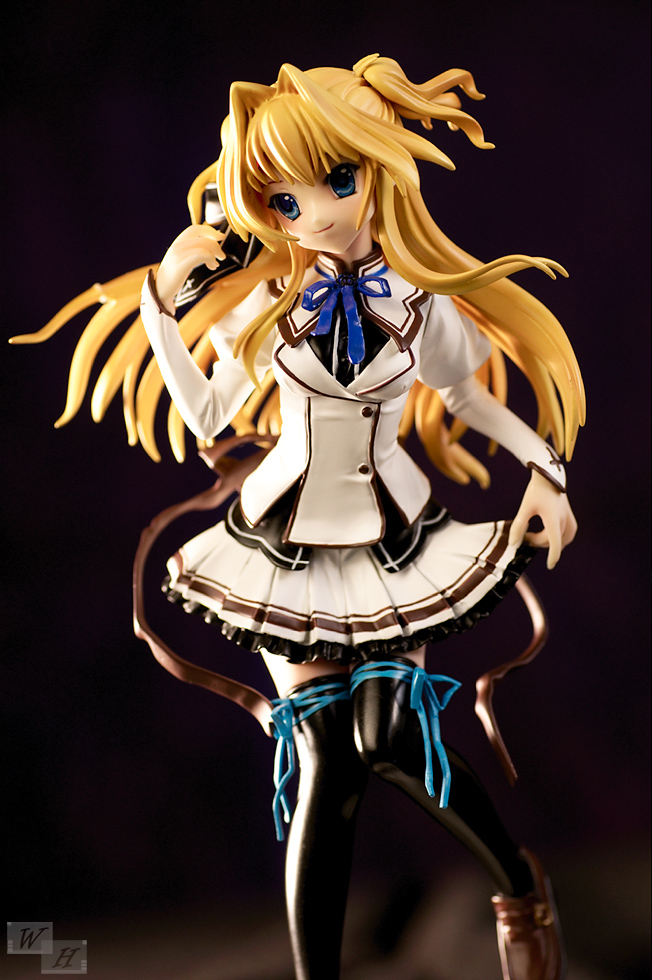 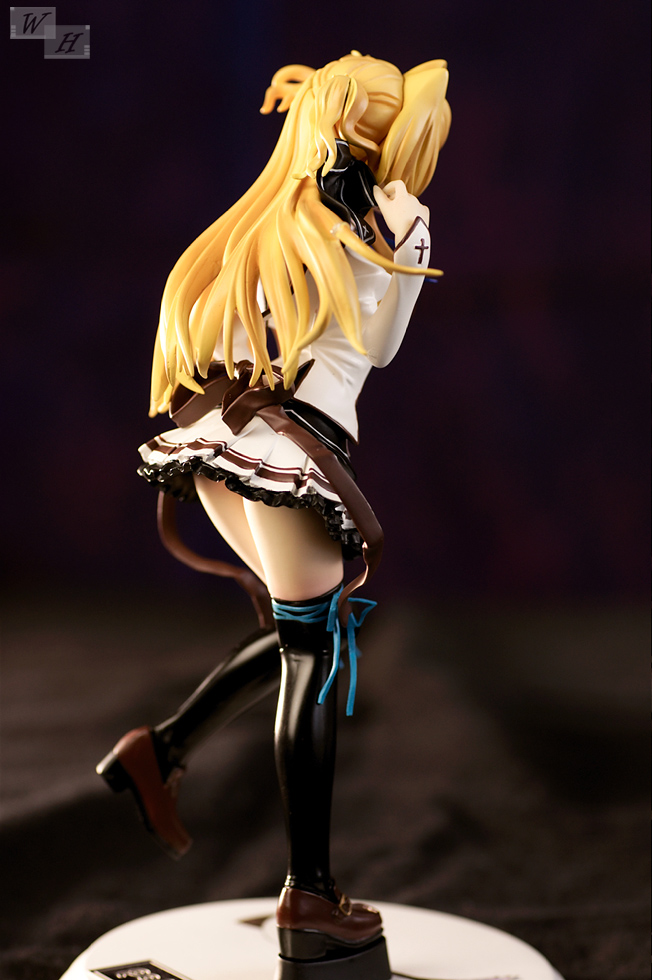 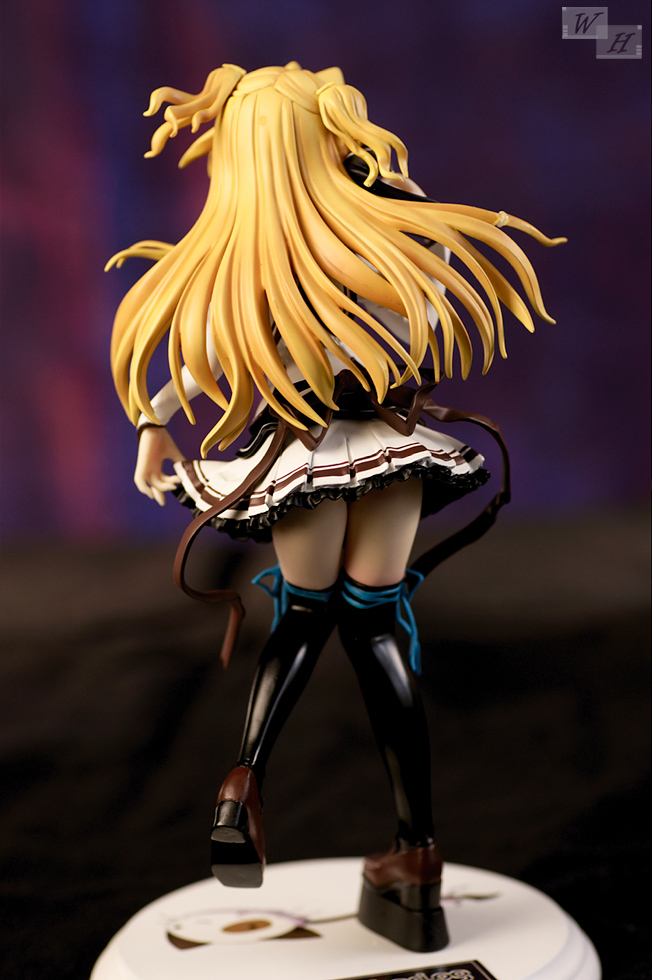 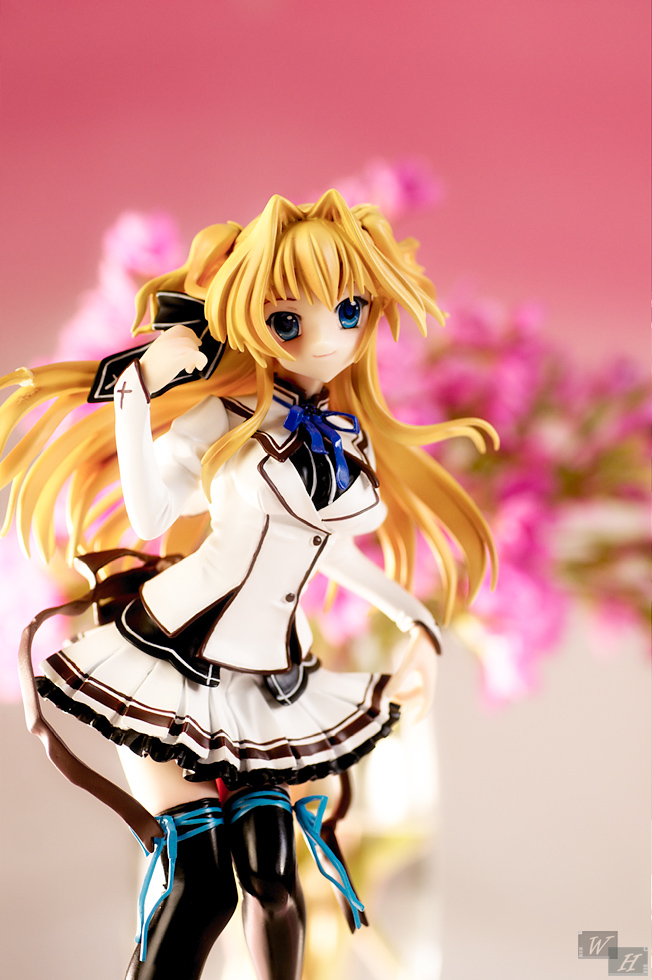 Airi’s pose captures her in a sweet and playful manner with one foot in the air and her flowing hair. With one hand she is playing with her hair while the other one is holding her skirt.

Like I already said, the shool uniform has a beautiful design, Airi is wearing a black shirt with a cream white blazer above. Her rather short skirt has nice brown lines and a black outer rim.
As demure student she is wearing white pantsu. There are a number of details that make the whole outfit even more appealing, like the huge ribbon at the back or the black one in her hair.

I really love these long sleeves that slighly cover the figures wrists, it’s so cute ^o^

This figure is attractive, since Airi is a pretty girl, but doesn’t have much direct fanservice, except the tightness of her blazer or the short skirt, she mainly has nice and pure bishoujo appeal. 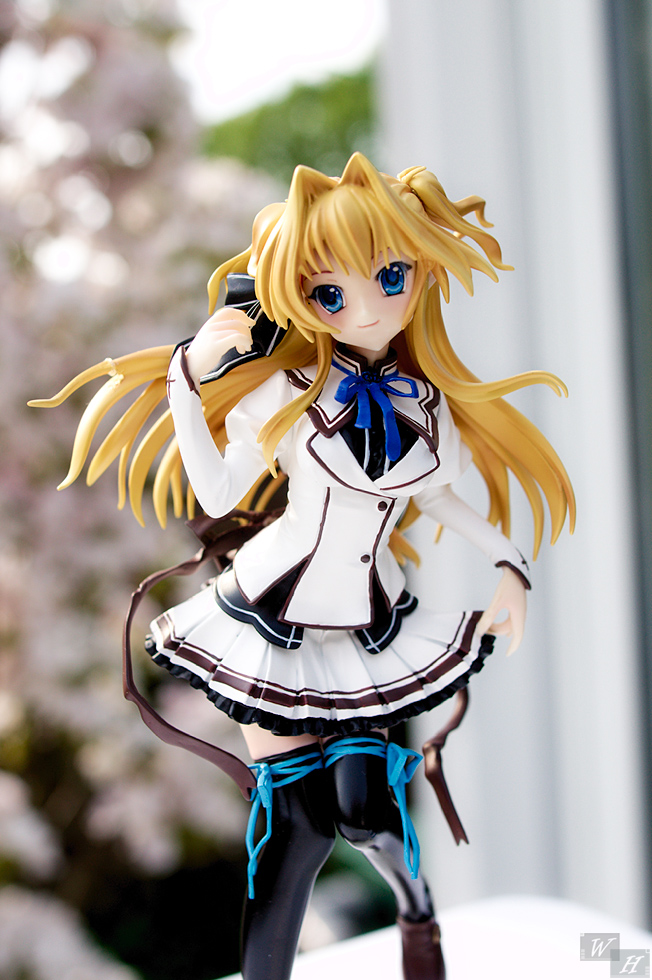 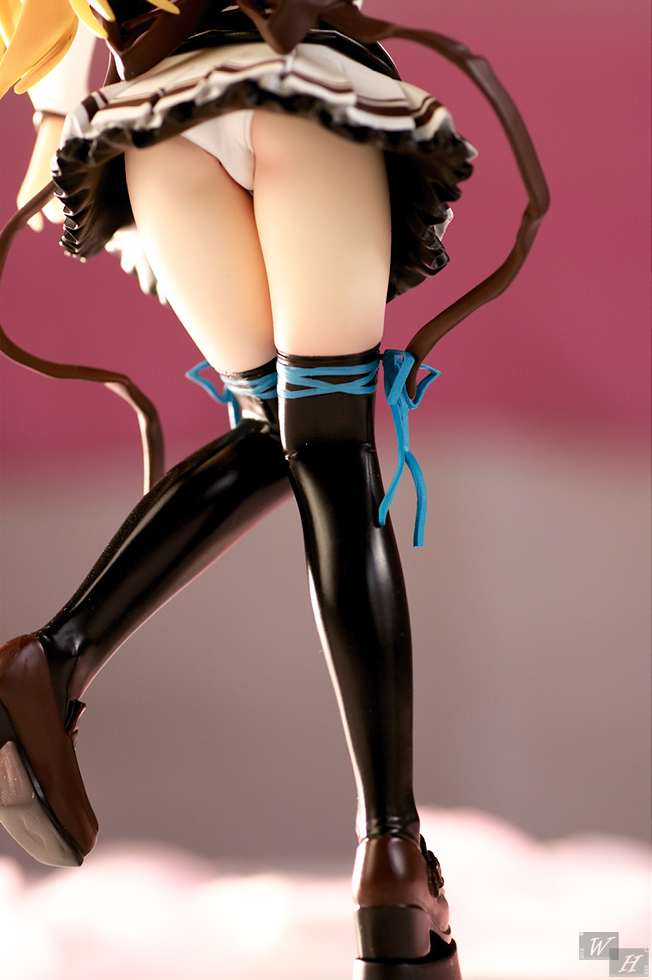 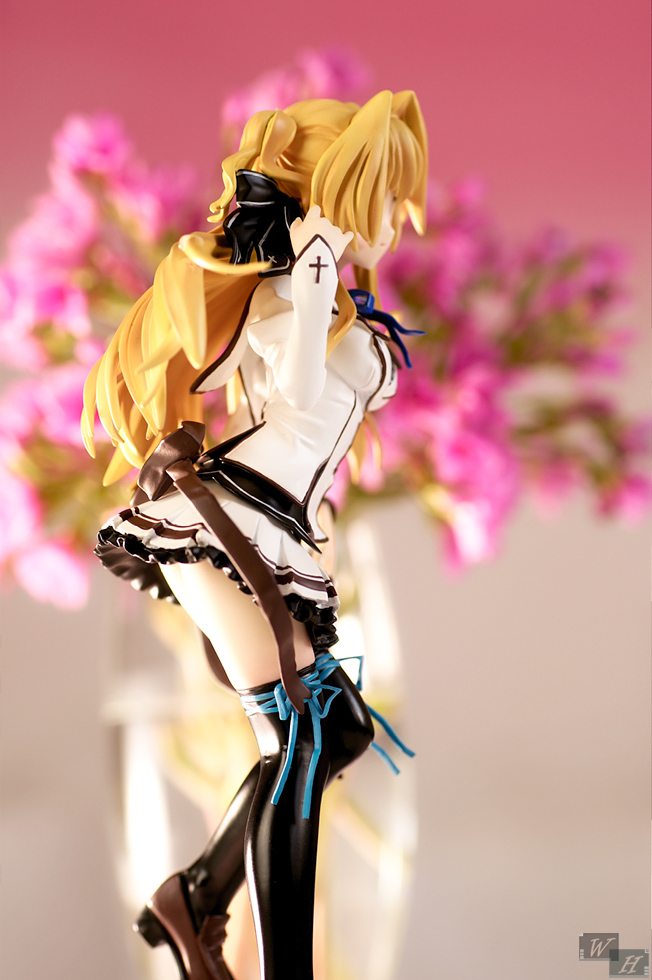 As far as I know Sena Airi is a completely handpainted figure, a very clean painjob on top of that. The design outfit of her relies a lot of fine lines and that makes it even more astonishing, this would easily something to be messed up on a mass produced PVC figure. The lining looks really impressive overall with next to zero overpainting. There is no visible shading on her outfit,  the wrinkles and folds don’t necesssarily demand it, since natural light already creates appealing shadows that make the figure look  nice and convincing. If there is one thing to criticize, I would say that glossy color of the ribbon around her neck disturbs the overall appearance a bit.

So the impression of my very first Garage Kit turned out quite positive, after I was really scared of receiving something I wouldn’t be satisfied with. The outfit looks beautiful and the figure has a pretty face. It was very nice that Sena Airi turned out like the promo shots implied, Gathering seems to have a very good quality assurance. The two damages of her, that possibly happened during shipment were a bit dissapointing, but actually the overall impression outweights it by far. 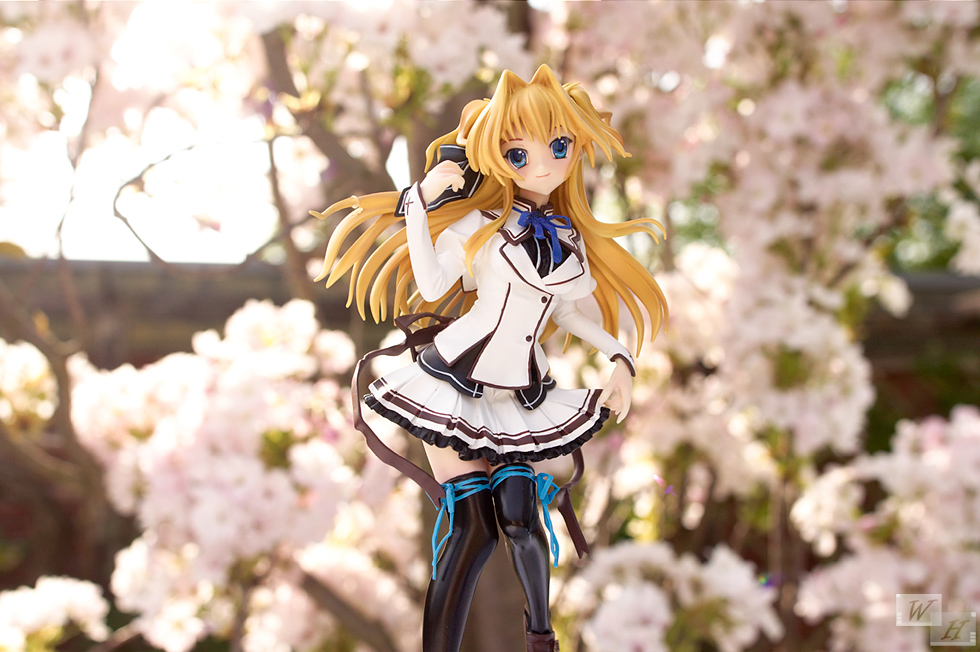 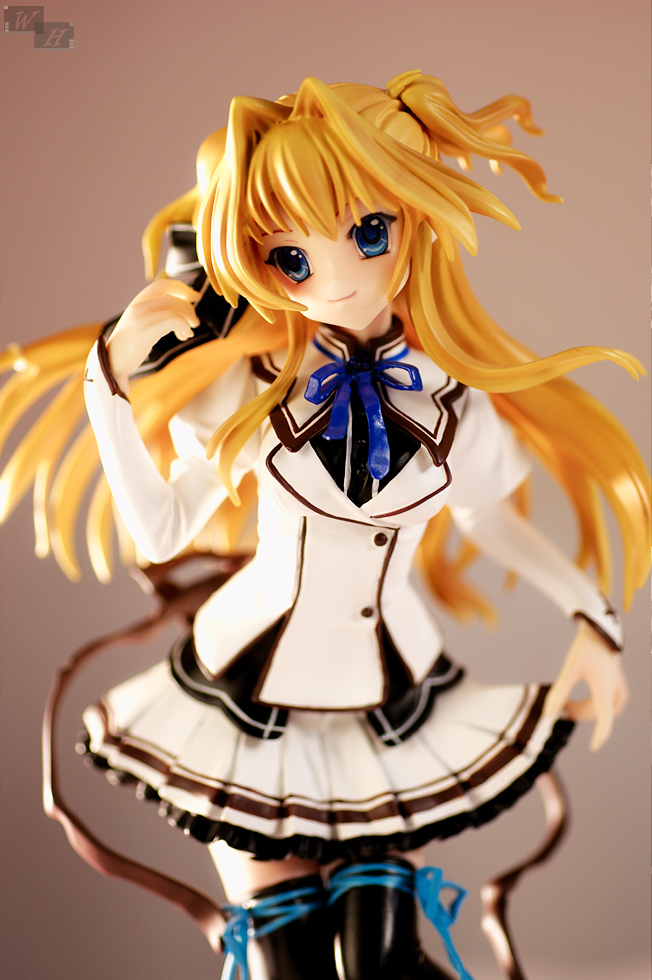 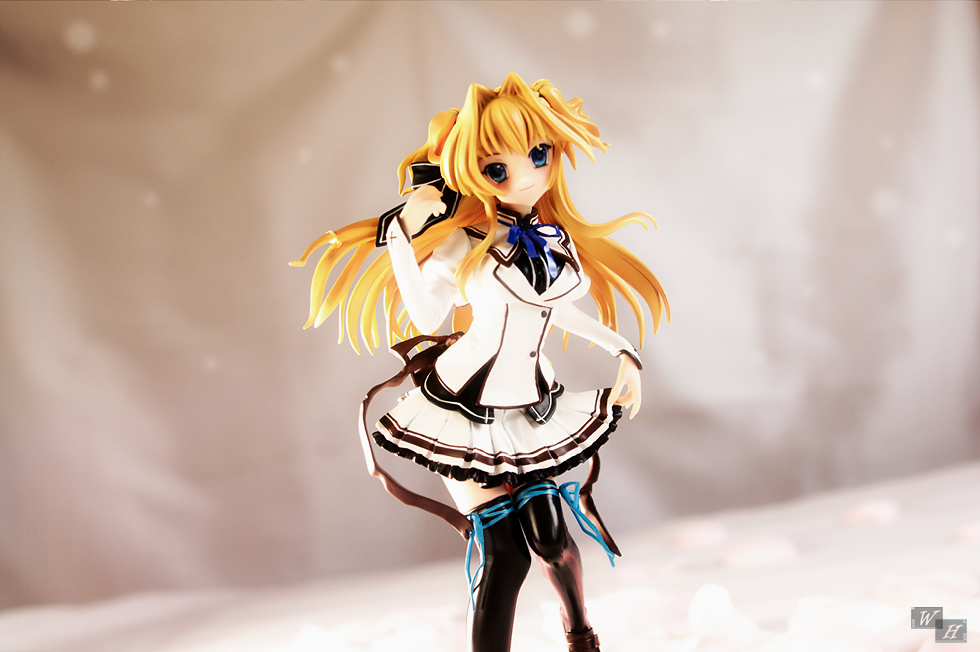 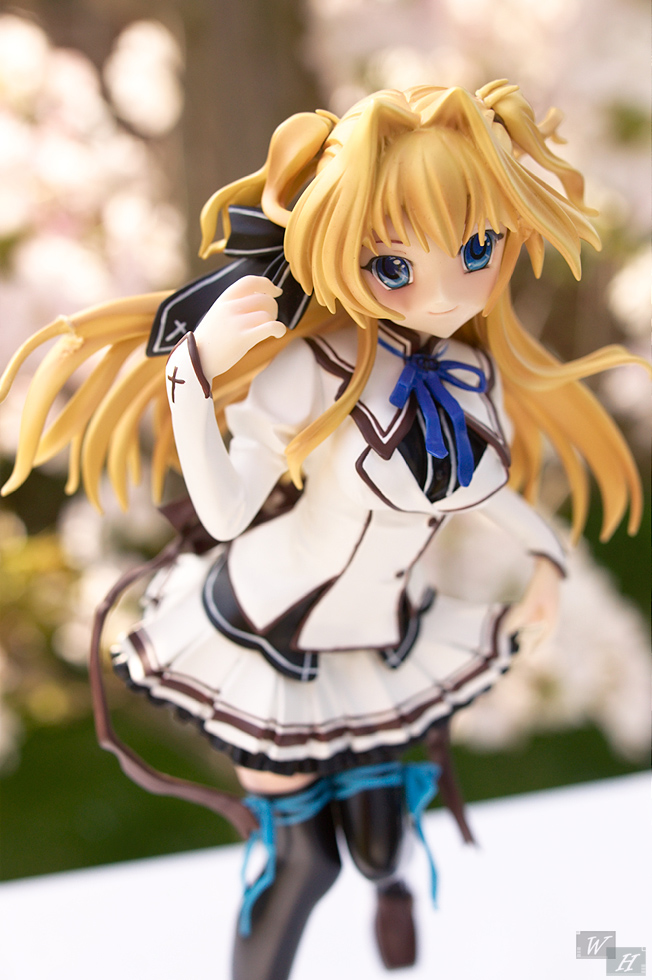 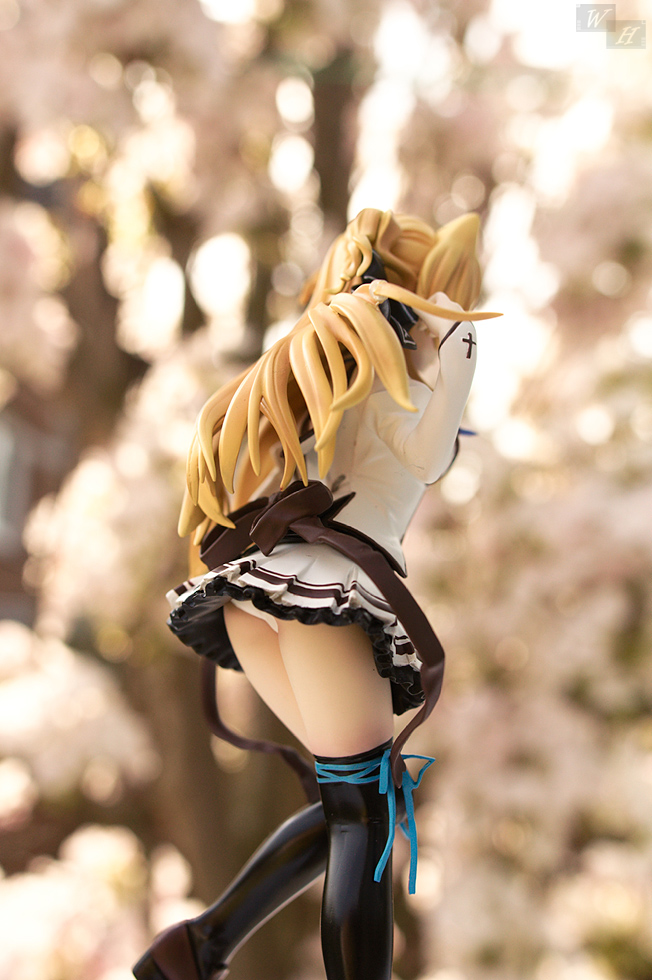 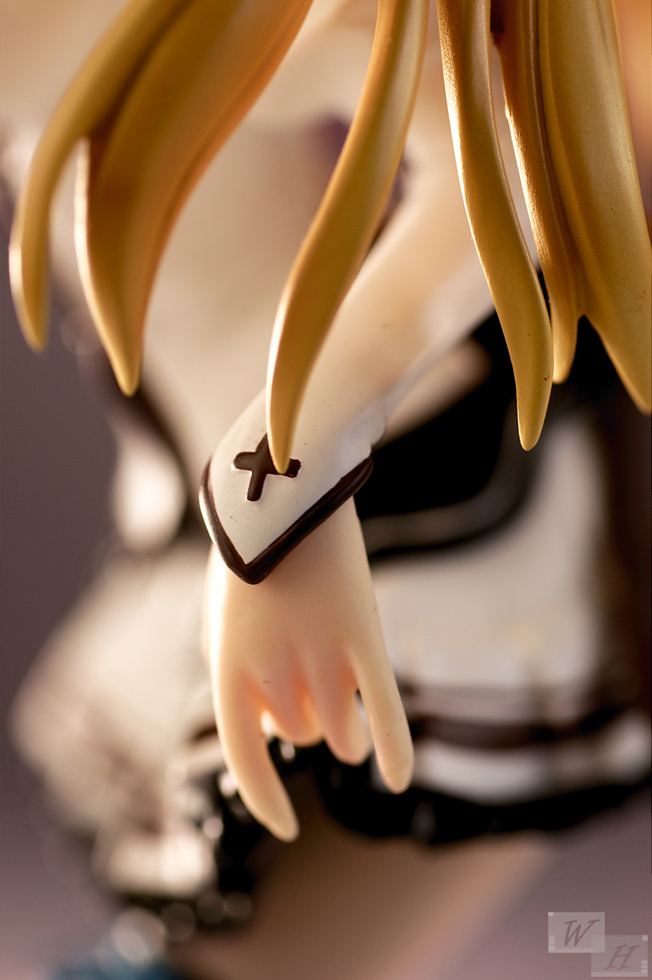 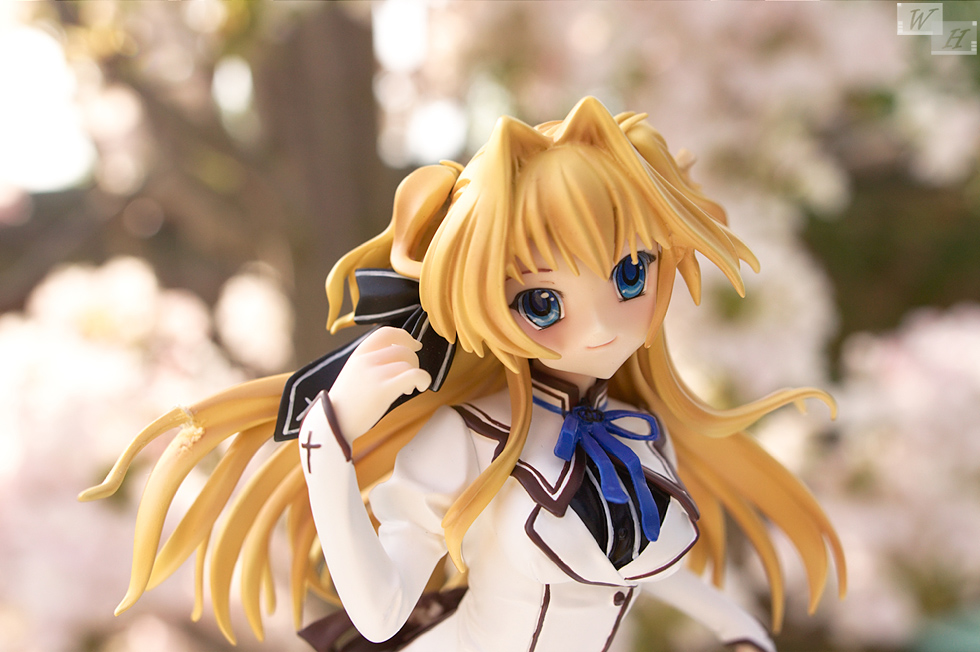 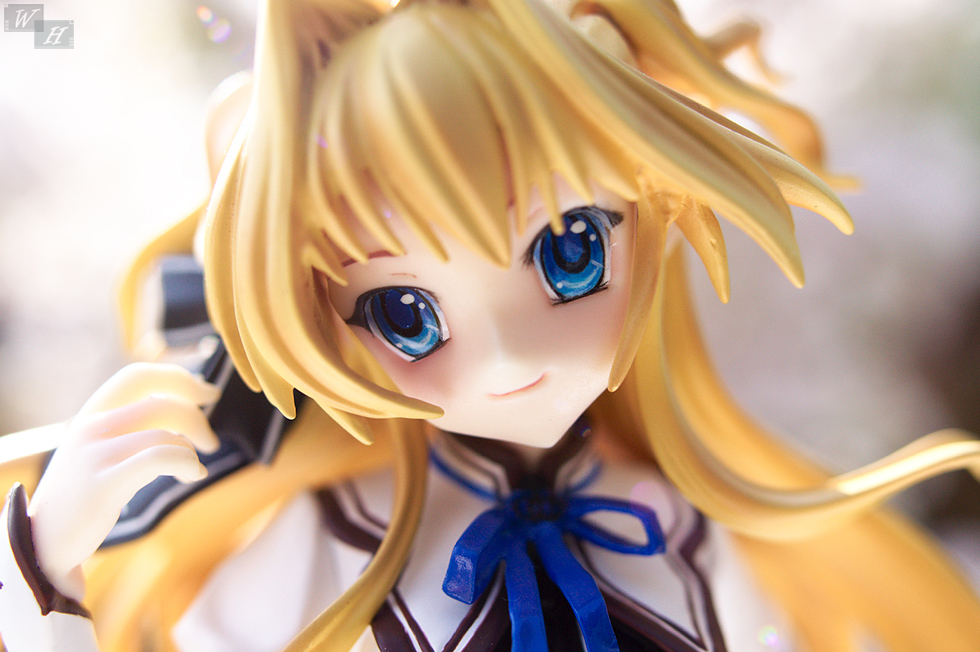 Do you have any experience with bishoujo GK’s ?

Do you actually have painted them on their own? I’d love to be that talented https://puttygen.in