So after a little too long break comes a new figure review. Todays figure is Homura, the gloomy girl with a firearm and other weaponary fetish. Her origin is the all so famous Puella Magi Madoka Magica, where a more or less sad destiny was delivered to every magical girl involved.

Akemi Homura is portrayed as a smart person with a graceful appearance and a cool contained attitude, but actually I never liked her attitude or I don’t like what became of her (episode 10).

A disliking for the character doesn’t automatically mean that I will pass on an appealing figure. One thing really caught my interest, this Homura figure was adapted from a GK figure sculpted by Ousaka Miki. I love GK figures but sadly good GK’s are hard to get and are rarely turned into PVC figures. I want to support such things, in hope to see more such adaptions in the future. 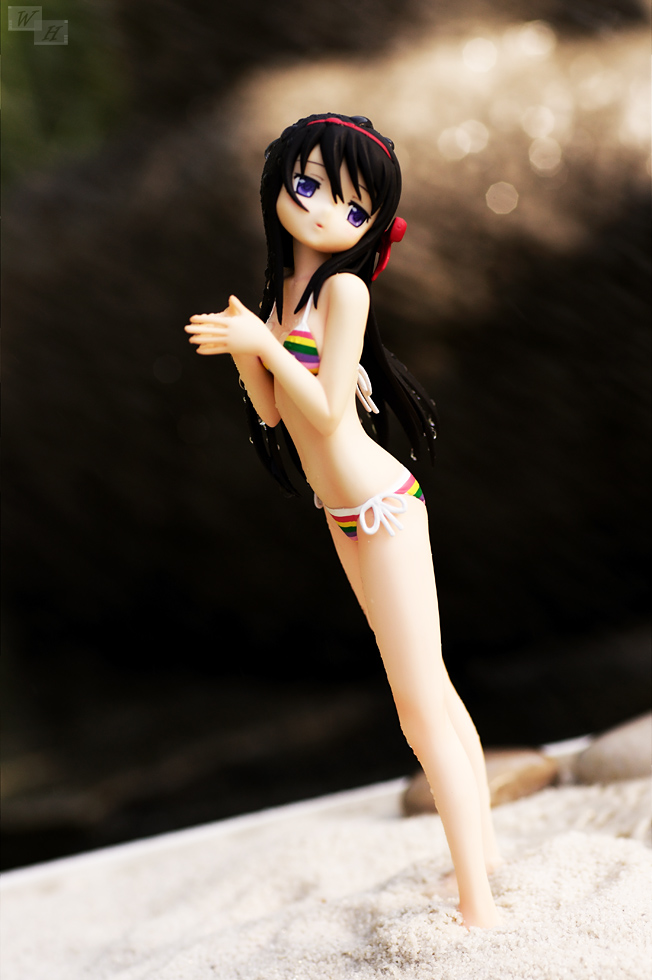 This figure of Akemi Homura was manufactured by Wave and the release occured in the end of June 2013. Wave is very famous for their Beach Queens line, where they adapt the heroines of fresh anime shows in beach attire. These 1/10 scaled figures are of solid, sometimes even very nice quality, they often have moveable neck joints and a nice design overall.

Miette and Exilehero from Otagamers recently proved how photogenic these figures are, great job guys. Btw this was once my Misaka Mikoto, it’s good that the cutie has a sister now ^^

As nice as Beach Queens are, 1/10 is a quite small scale and they have a lack of presence when placed next to larger scaled figures. One of the reasons why I parted with mine after some time.

Homura might be mistaken for another  Beach Queen figure, but surprisingly the figure is scaled 1/8 and part of Waves Dream Tech line. With 1,55 m Homura is a rather small girl, the figure here is 185 mm in height, but for a real 1/8 scale she should be 9 mm taller, but it’s no really big deal. In terms of size and proportions the figure is close to ALTER’s Menma. 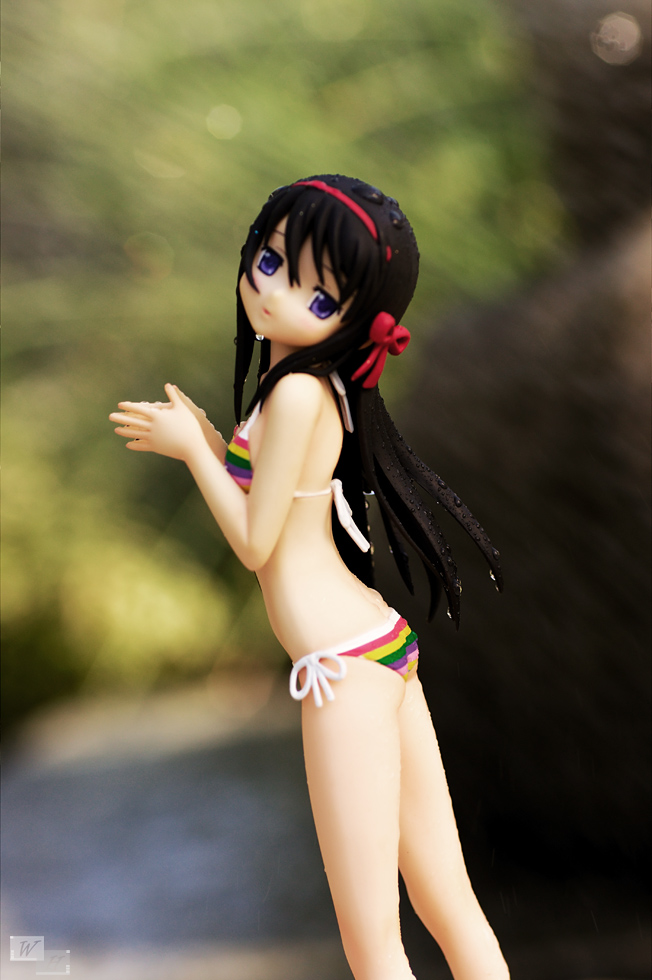 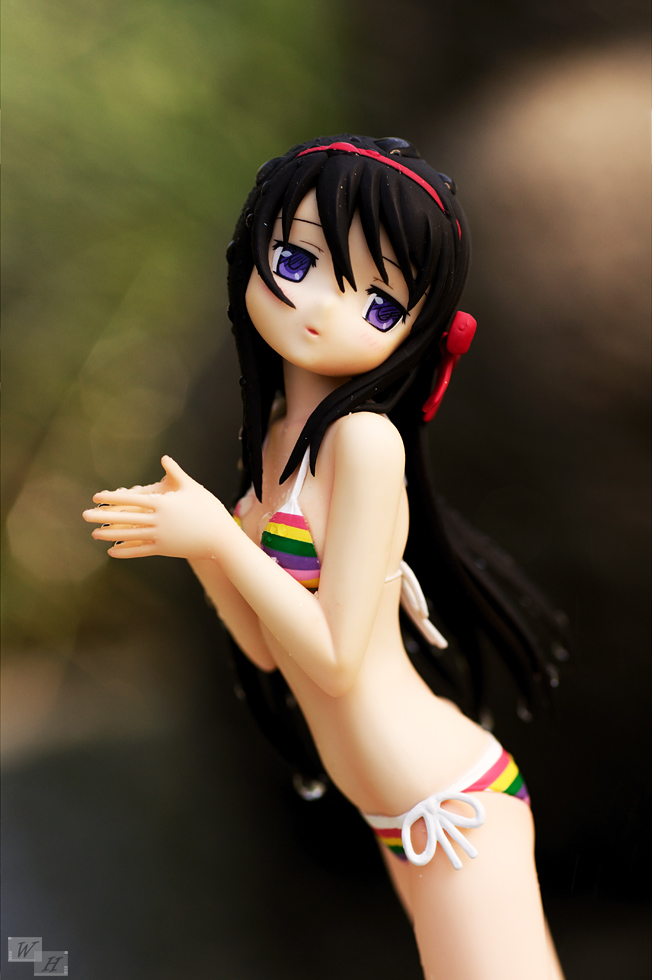 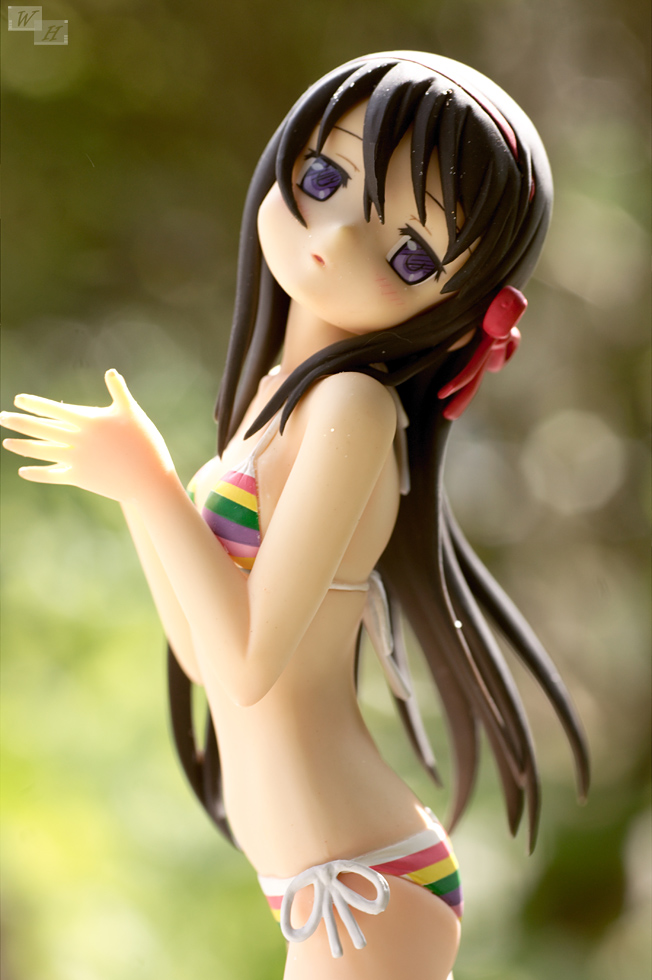 Homura has nice dark brown hair with nice long strands, I really like the bangs in front. The hair is cleanly produced and leaves a positive impression. There is a red hairband with a ribbon on the left of her head. The face is beautifully sculpted and painted, the rounded corners give her a nice appeal. The anime is captured very well in her face, there are attractive eyebrows, lovely blushmarks that really boost her cute side. And Homura’s eyes are as deep as the ocean.

The figure also has a nice little mouth opening, overall her face turned out very pretty. Im not really sure how to interpret her expression, maybe you have an idea. To me Homura seems to be spacing out, there is also a little yandere touch, but also a lot of cuteness can be found. 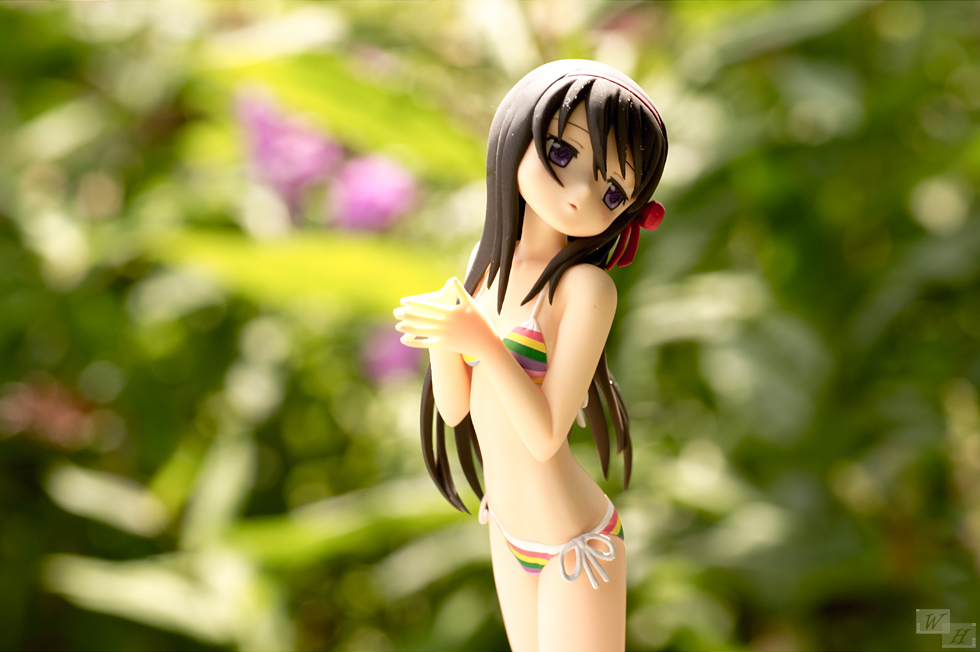 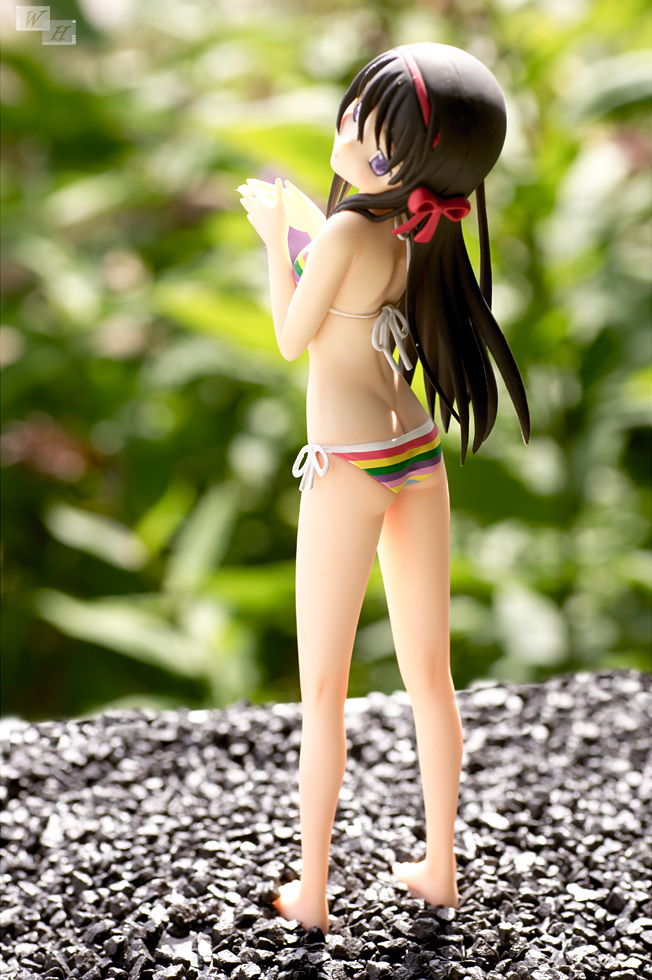 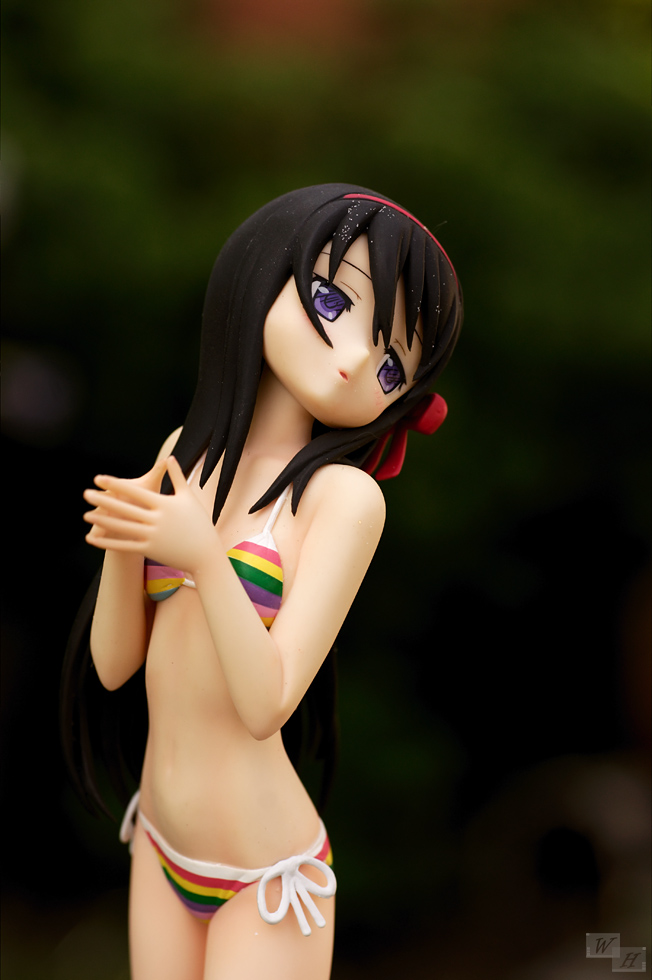 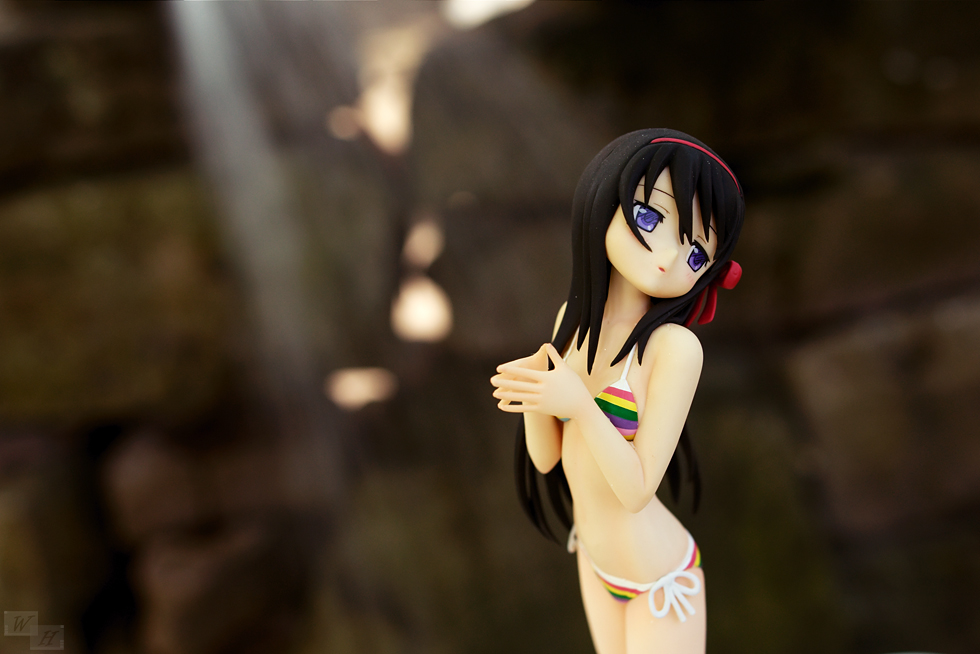 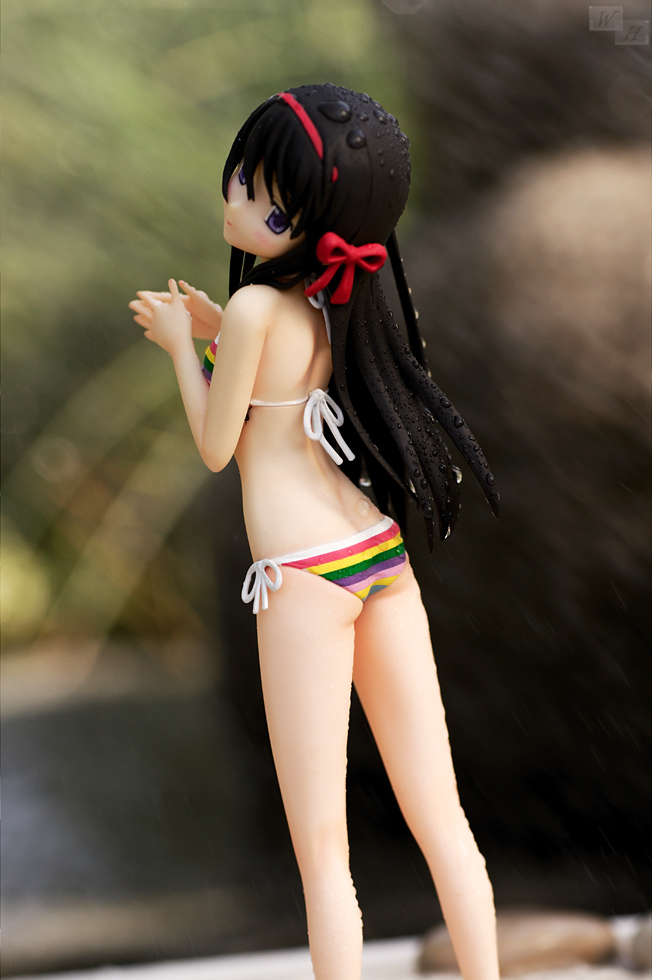 Homura is approximately 14 years old, and as the young teenager she is Homura has a quite petite and skinny body. She is standing straight with her head tilted backwards and turned to the left. This rarely used pose makes the figure quite interesting and gives her a nice touch.
On the downside this pose also gives her some strangles, she is supposed to face the viewer.

Homura has no real female curves, but  she is a quite skin revealing figure, her belly is rather nice as well as the shoulderblades. The sculpting here is also done in a convincing way, she is nearly free of molding lines and these single little fingers are skillfully and cleanly pressed PVC. They could have chosen a lazy way to execute this part of her with no space between her fingers, but they didn’t.

The skimpy rainbow striped bikini is very cute and colorful which adds some contrast to the skin and the dark hair. it’s not a super detailed piece of sculpted clothes, but it’s enough to create a pleasing sight. 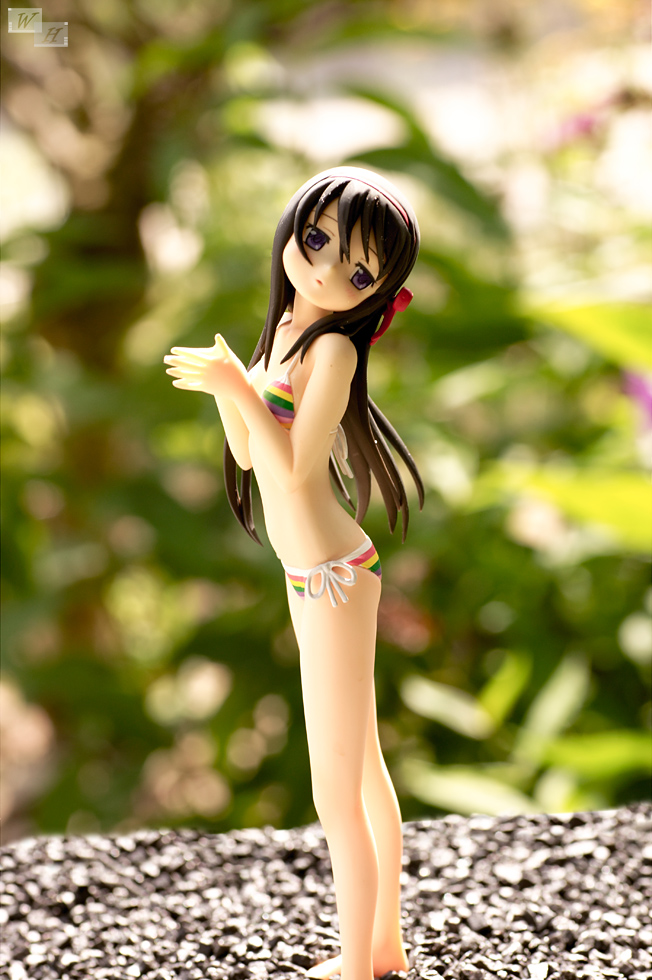 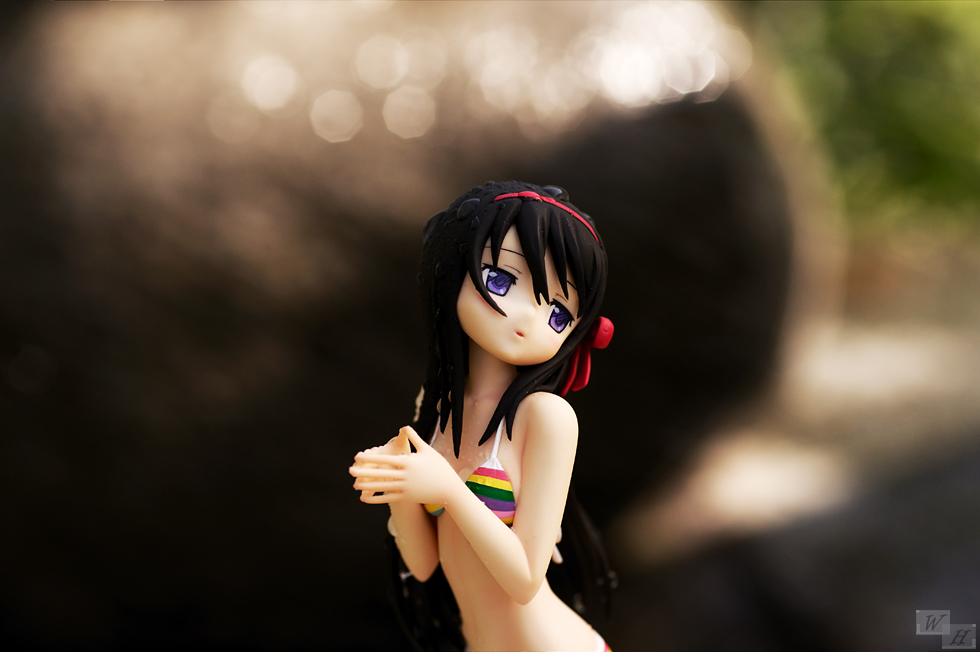 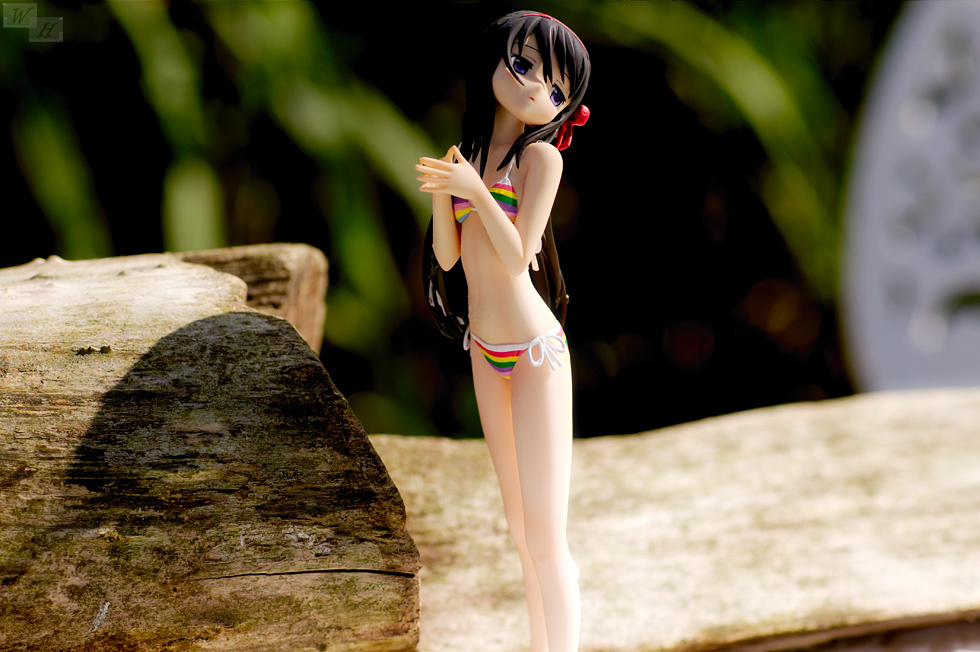 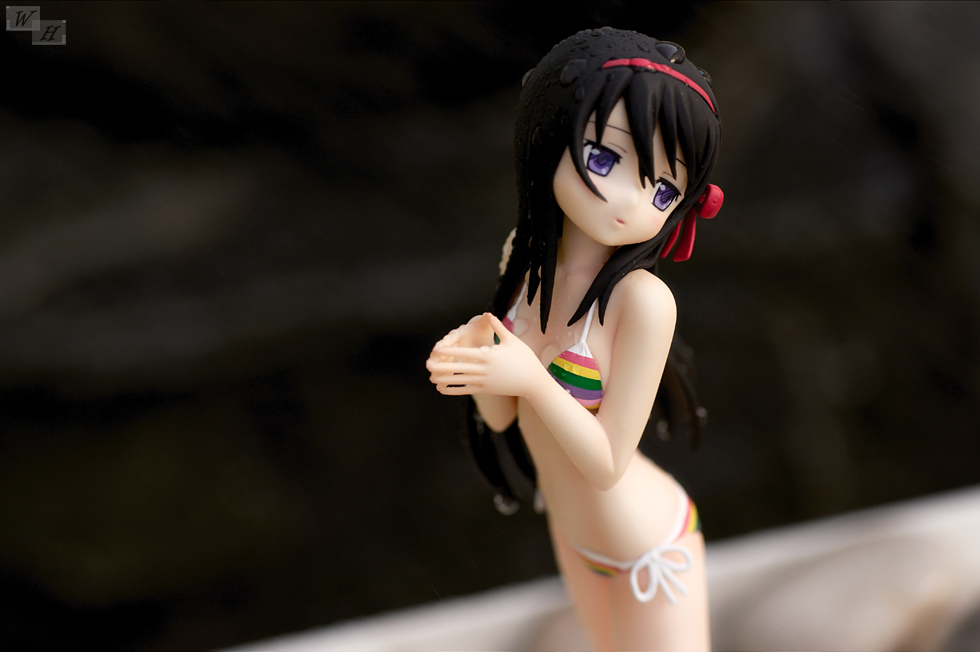 So what are my final thoughts about this Akemi Homura from Wave, Im quite satisfied with her. The face is very detailed and makes a cute figure out of her. I also like her unique and kind of fascinating pose. One thing I learned again was, that I don’t necessarily have to like the character to appreciate a certain figure, when the design is nice and appealing for me and this GK adaption definetely was something I like. Of course there are more cheerful and curvier swimsuit figures, but Moemura manages to convince with her interpretation of vulnerable cuteness. It’s good to see a figure from Wave which is not scaled 1/10, while she’s still not a real 1/8 scale, Homura doesn’t look awkward when being placed next to other 1/8 scaled figures. 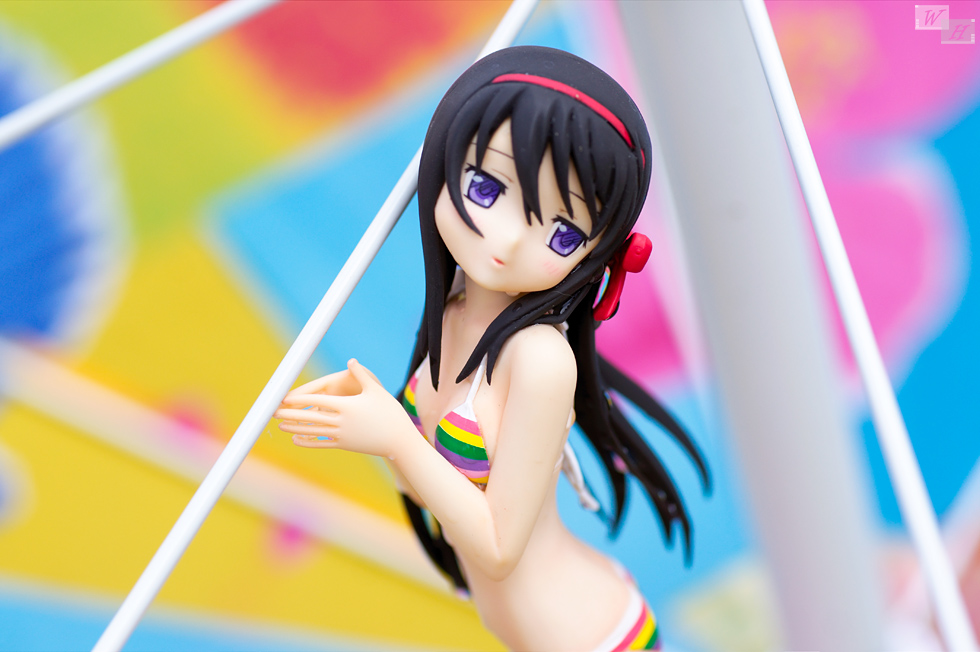 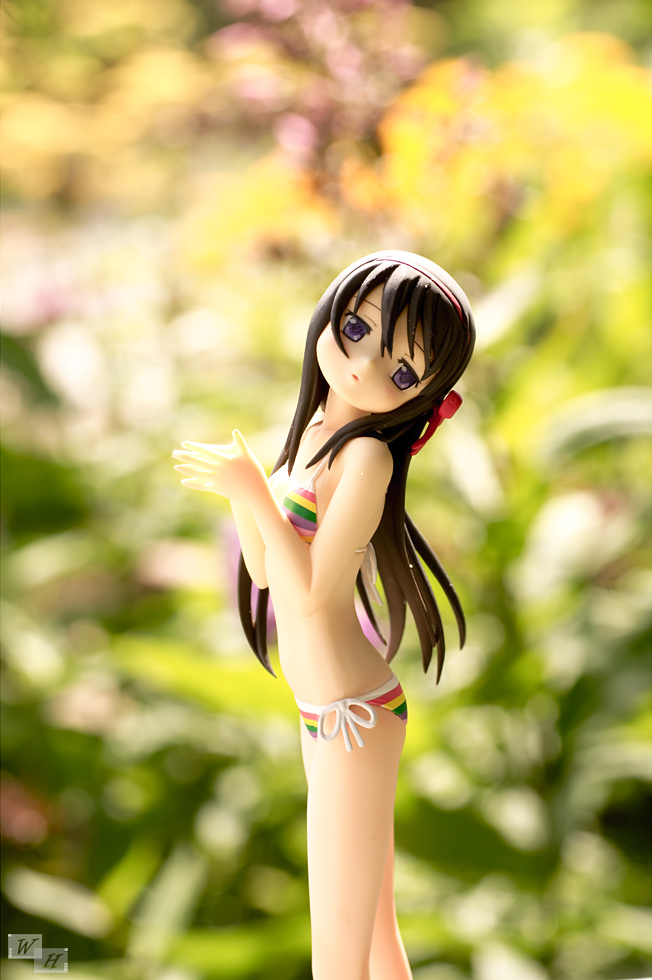 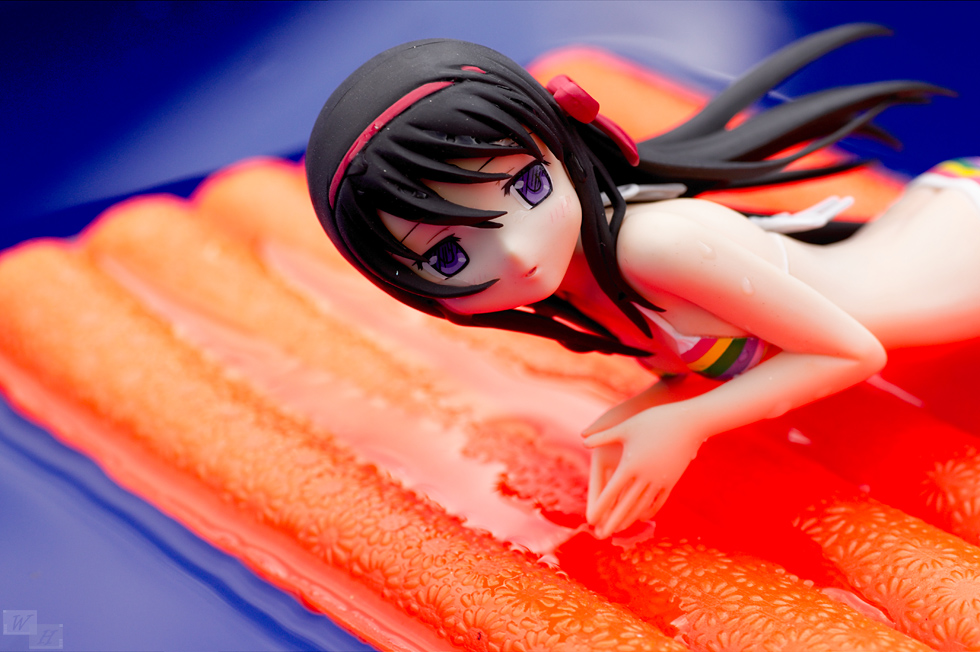 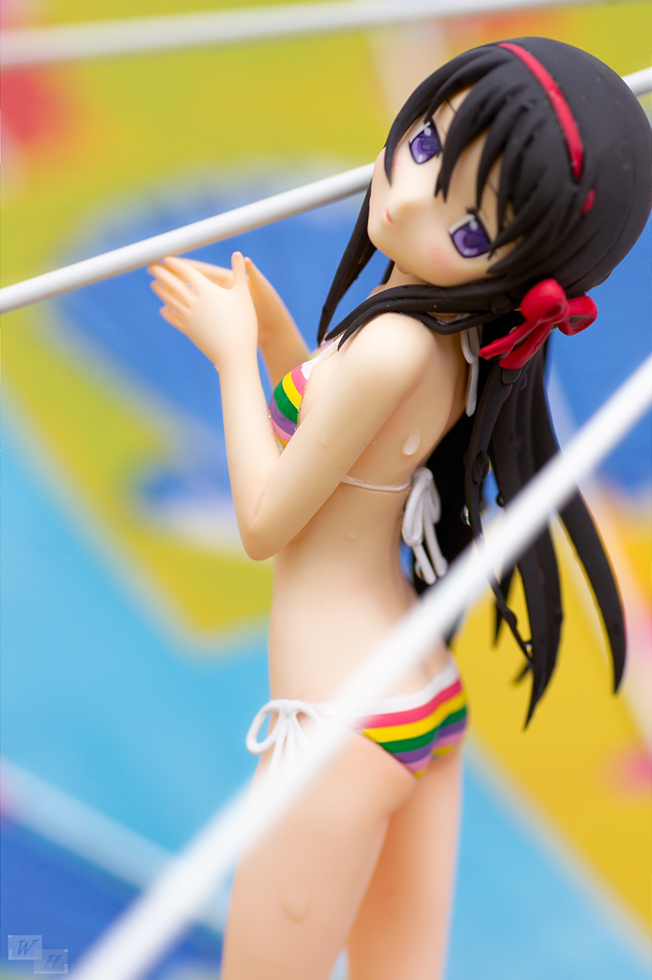 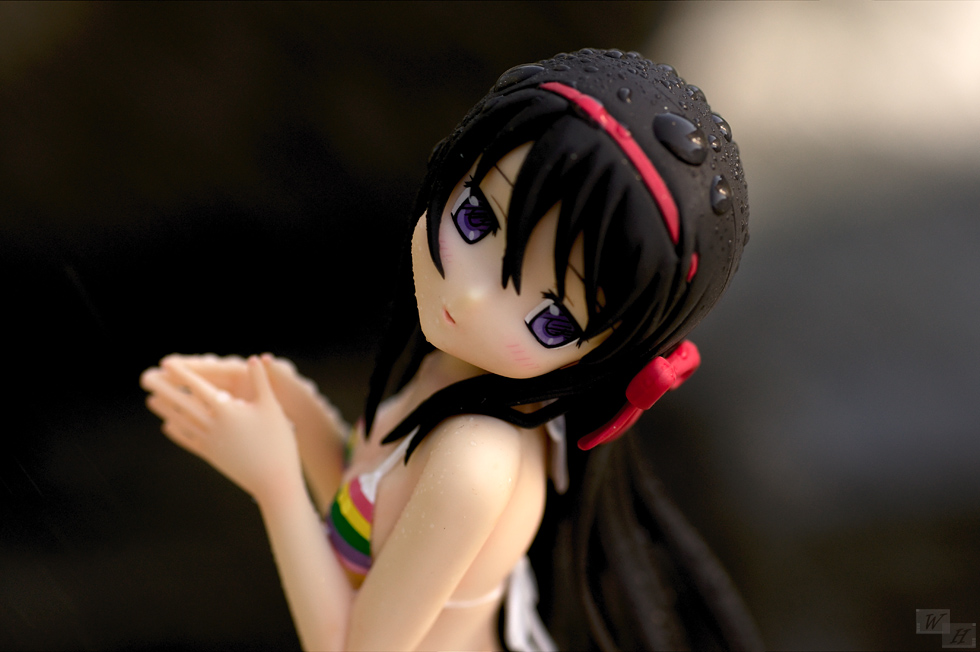 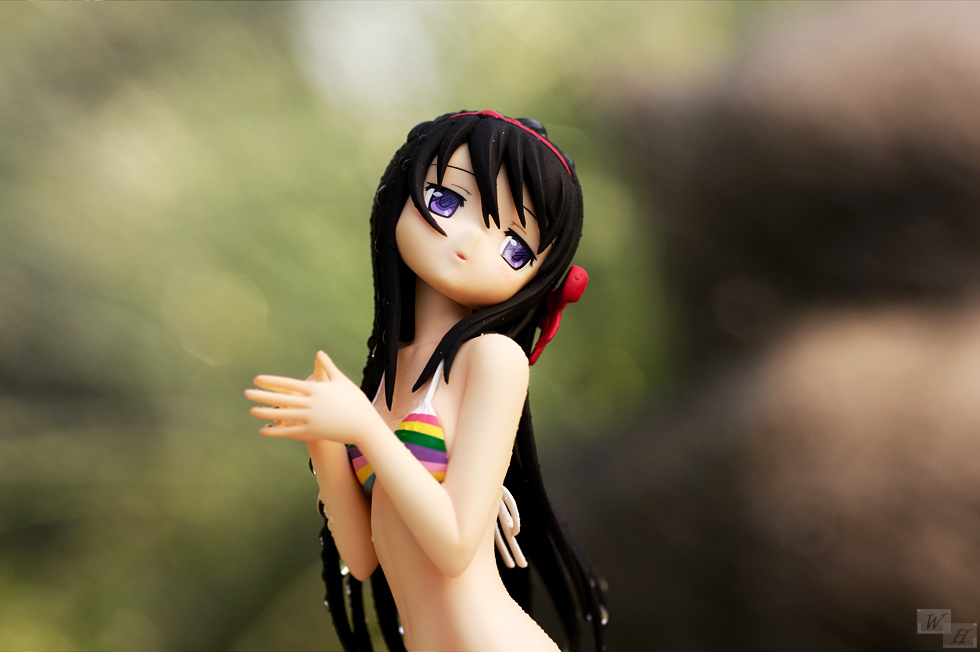 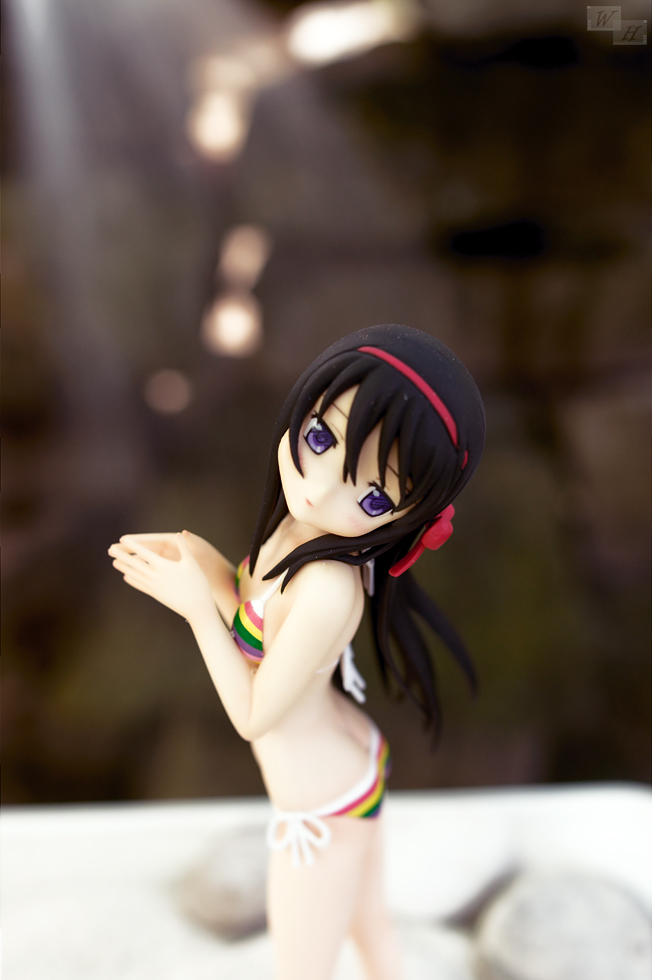