Today, it’s time for a new anime review, it’s about a hilarious short comedy show that I had watched recently. Namiuchigiwa no Muromi-san which was produced by Starchild Records and Half H.P Studio. As part of the anime spring season 2013 it was aired from April till June.

It is based on the manga “Miss Muromi of the Shore”, in this anime we follow the daily life adventures of Takurou, Muromi and her friends. The story begins when Takurou enjoys his peaceful fishing hobby at the pier, but on this day he literally hooked a mermaid, called Muromi. 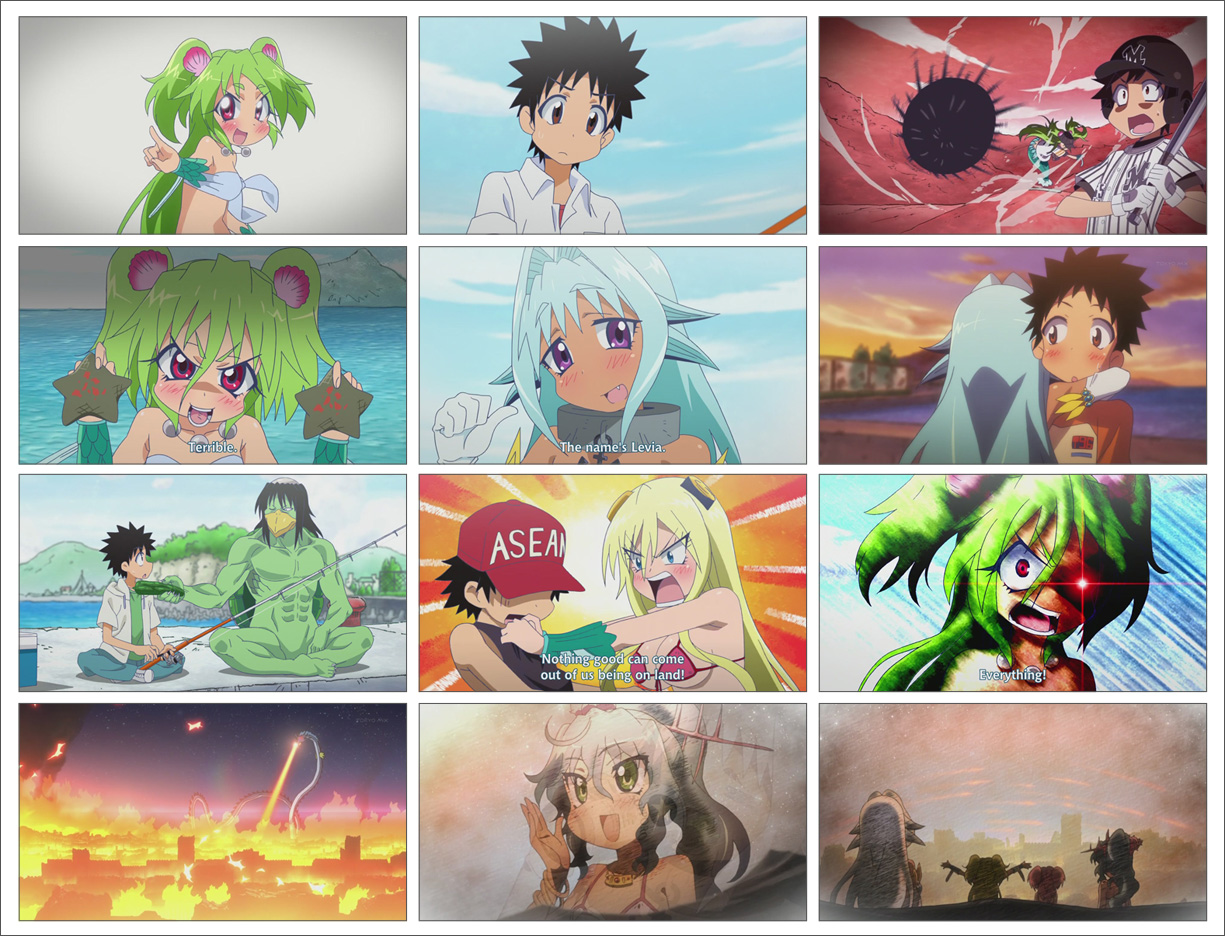 To double his surprise the green haired mermaid is able to talk. Muromi is voiced by Tamura Yukari, I actually had to look up the info about her VA, because I could never imagine Yukari with this strong Hakata accent. Muromi is quite attached to the world of humans, so she starts to speak nonchalantly with Takurou after he had removed the hook out of her mouth. Both start meeting as a daily routine, but you could say that Muromi mainly forces herself onto him.

Her age is estimated to be 8-digit but mentally she is only 18. Muromi has not the most ladylike personality. She is crazy, a little superficial and short tempered, but overall she is actaually a cheerful and not a really bad person, she is something like an idol among the other mermaids.
Muromi is a cute “It” girl and a boar with a short temper at the same time. She is quite tough, but she gets vulnerable when she is attacked by birds or someone dear to her hurts her feelings. 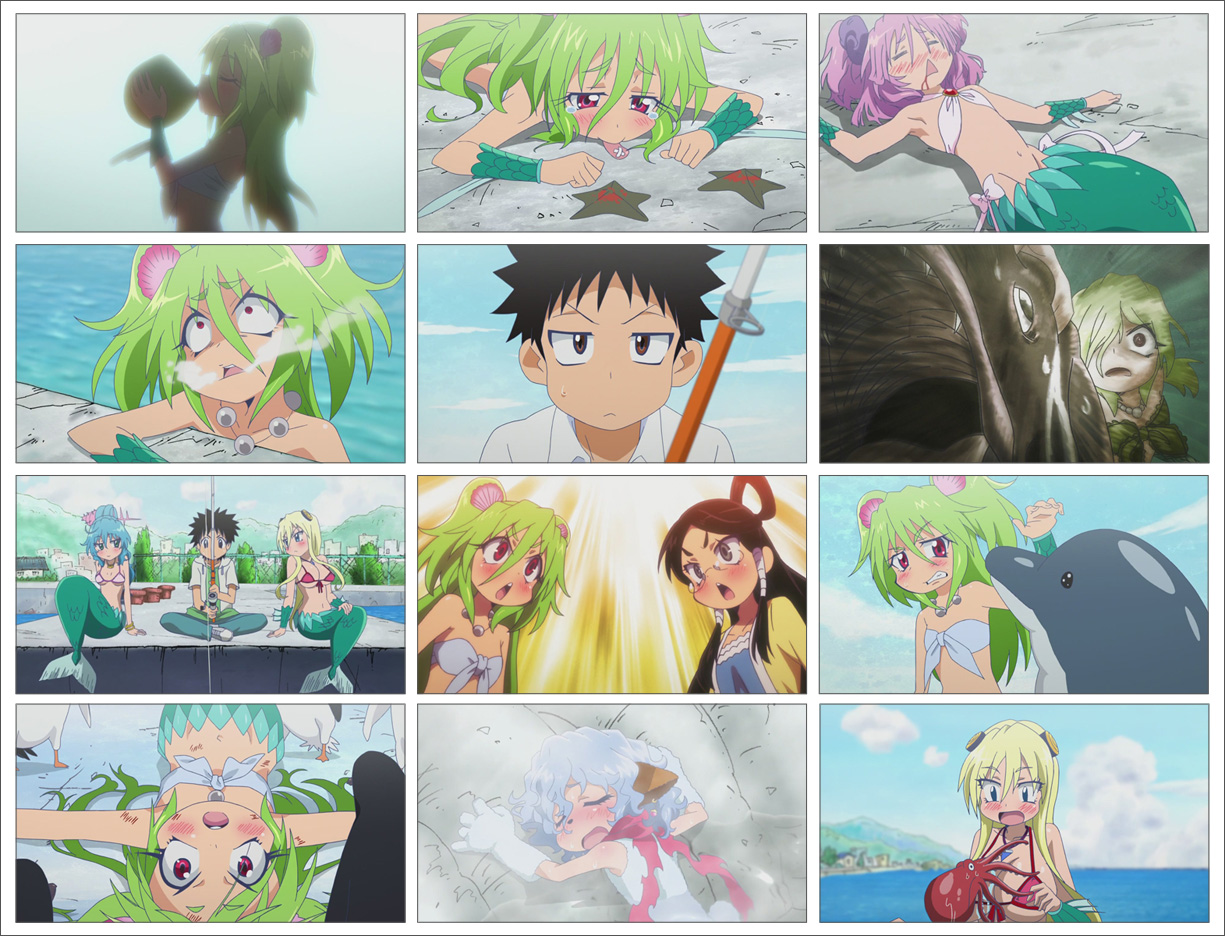 Because of a broken heart in the past, million years ago, Muromi is negatively biased torwards all living sea mammals. The certain episode which centers around this topic is so funny.

Muromi is an enchanting freak, on the other hand Takurou is a pretty normal main character. He is a well behaved and level headed boy, who cares about others. He is often puzzled about the behaviour and technology of the aquatic world. Even though this a short comedy show, most of the reappearing characters have a solid written and unique personality.

Each of the 13 episodes is around 13 minutes long and portrays a random adventure of Muromi and her friends, aside from mermaids her friends also consist of a Yeti, Leviathan, a Kappa and other creatures of ancient saga’s and Japanese fairy tales.

Don’t be fooled by the cute appearance of this anime, a trademark of Namiuchigiwa no Muromi-san is the partly crude comedy and other kinds of humor. The normal comedy is already quite good, but the politial incorrectness is just hilarious, see it for yourself when Muromi gets badly drunk from time to time, vioaltes her friends, punches dolphins and insults whales. 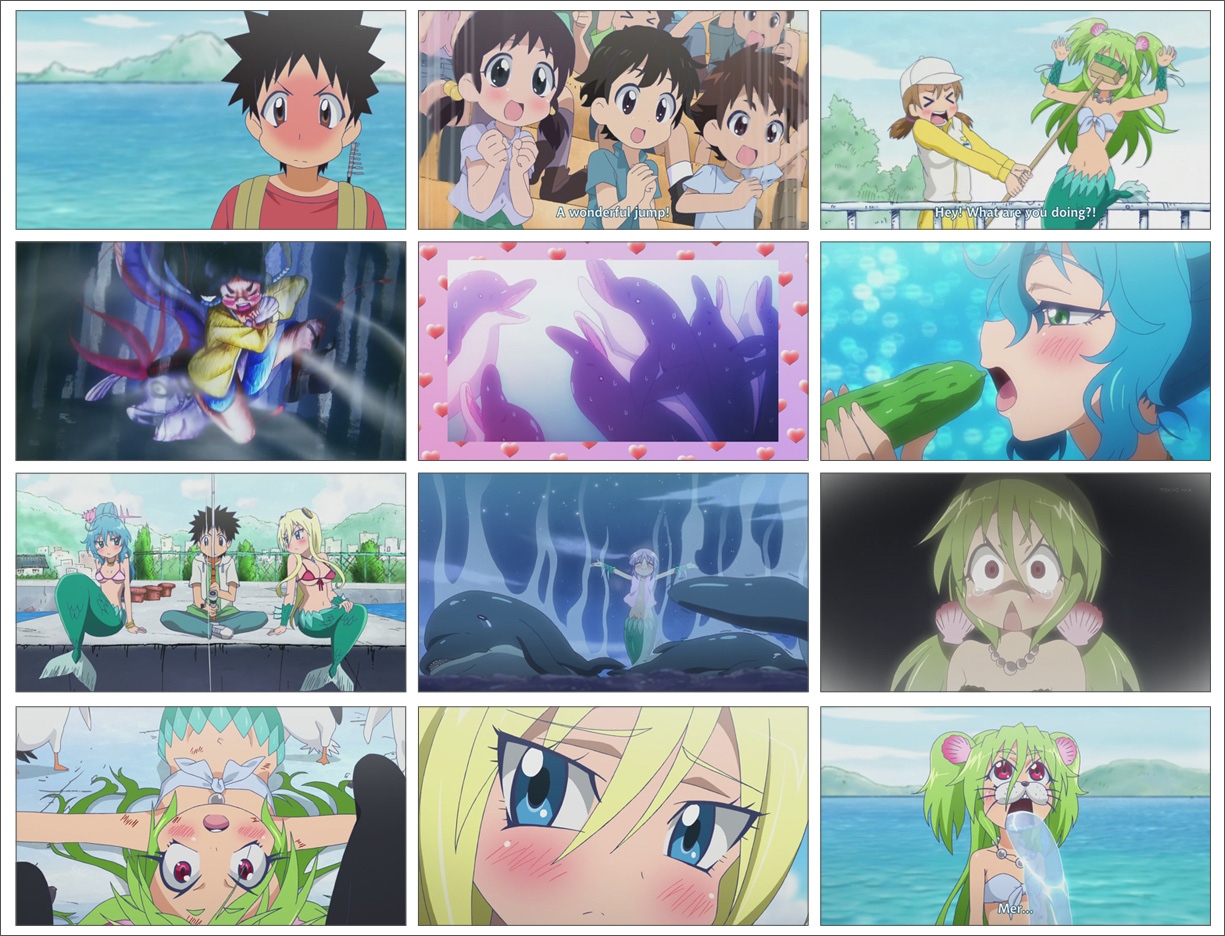 If I had to make a comparison to another anime, I would say Namiuchigiwa no Muromi-san is Lucky Star on drugs. There is also bit of Arakawa under the bridge feeling when looking at some of the weird characters. I found this short show to be highly entertaining and the coastal flair was refreshing. When watching comedy shows I often found myself wishing for more character development, but not here. It is not necessary for such a show to have growing characters.

The animation style is quite nicefor a short comedy show, it shows fluid animations and the female characters look very appealing in a cute way with big heads, big eyes and blush.
The backgrounds which portray the ocean and coastal regions have a picture book look.

here is the UNofficial opening, it works as well *lol*

If you like comedy with cute characterdesigns and a political incorrect touch you can’t go wrong with Namiuchigiwa no Muromi-san. I had lots of fun