Welcome to Wieselhead‘s personal coverage from the Wonder Festival 2013 summer version, which was held on July 28th. It’s the biggest, most popular event for figure collectors around the world. There are two Wonder Festival each year, once in winter and once in summer.

Also in this year many manufacturers of figures and other anime related goods featured and announced interesting and most of all beautiful figures, most will hopefully (or hopefully not ^^) be available in the upcoming months. Due to the amount of interesting figures the Wonder Festival 2013 summer coverage will be divided in two posts full of bishoujo figures.

In these posts I will talk about the figures, that I considered to be worth mentioning…

I was most impressed by the things from Max Factory, seems like they finally realized their talents next to manufacturing action figures. It’s a remarkable number of nice figures. 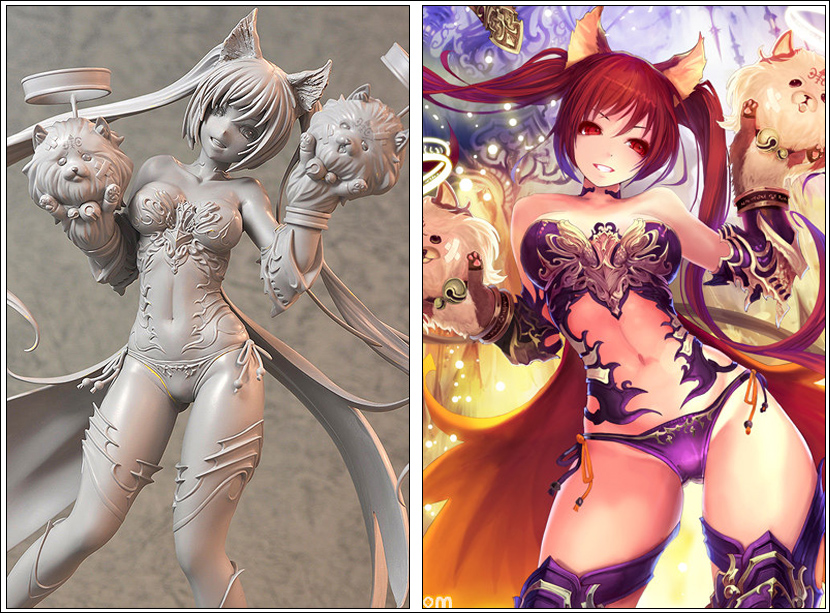 This was the first figure of this years Wonderfestival that caught my interest, maybe a top favorite. Fans of demon girls have a nice time recently, first the Seven Deadly Sins and now other demonic beauties. Cerberus has slightly less anime-ish characteristics than other figures, but she still has a beautiful youthful appearance with a cute face, a sexy body and furry hands… furry? ok ;D. I really like how Max Factory adapted this figure from the to me unknown source.

sculptor: no data  – release date: no data – scale: no data 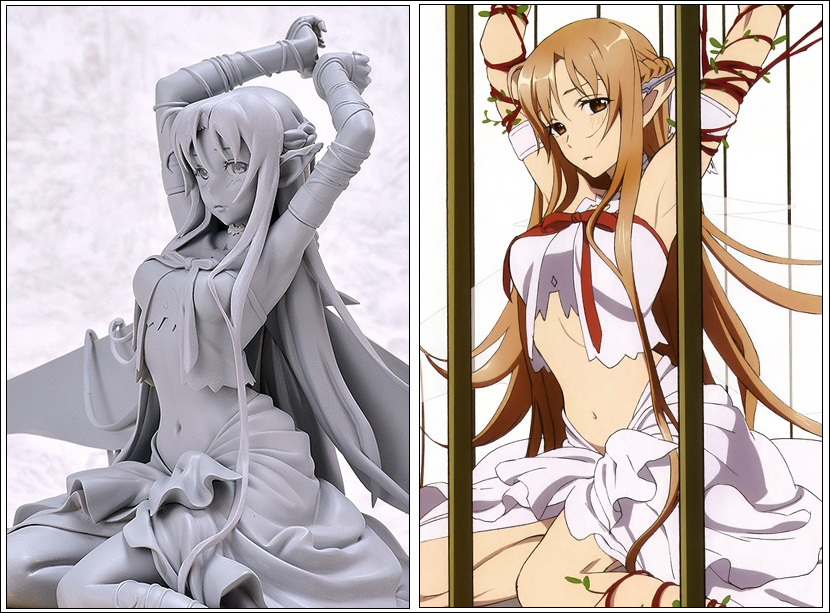 This a surprisingly nice portray of a damsel in distress, Asuna/Titania has a very seductive appearance, it looks totally like Max Factory qualiy, I mean her face is so beautiful and this expression  is so detailed. The chained up arms it gives a slightly sadistic touch to the figure. 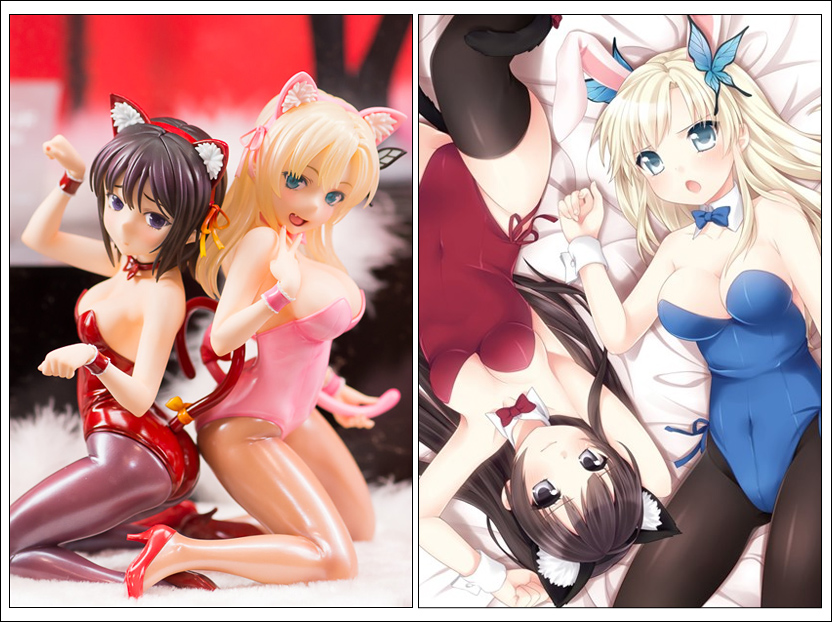 More Haganai figures, this time Sena and Yozora in cat ear leotards, I think they would look nice next to the previously released Kobato and Maria. Well, as much as I wished for something like this after the lovely Maria and Kobato in cat costumes, Im not that hyped for it. These two or better said Sena in particular is a little off. Her face appears a bit strangely captured 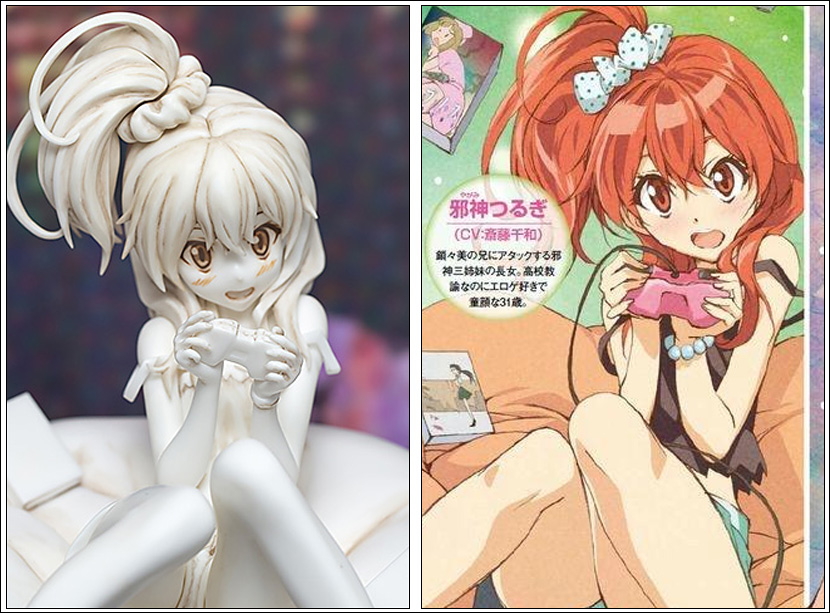 The anime was a bit super strange, but also very funny and with likeable characters. I actually mistook Tsurugi for her younger sister Tama, but ok I don’t favor any of these characters.
The figure is sculpted in a very cute pose and the side ponytail is another nice charm point.
Im already enchanted by the figure and will most likely purchase her when the time comes. 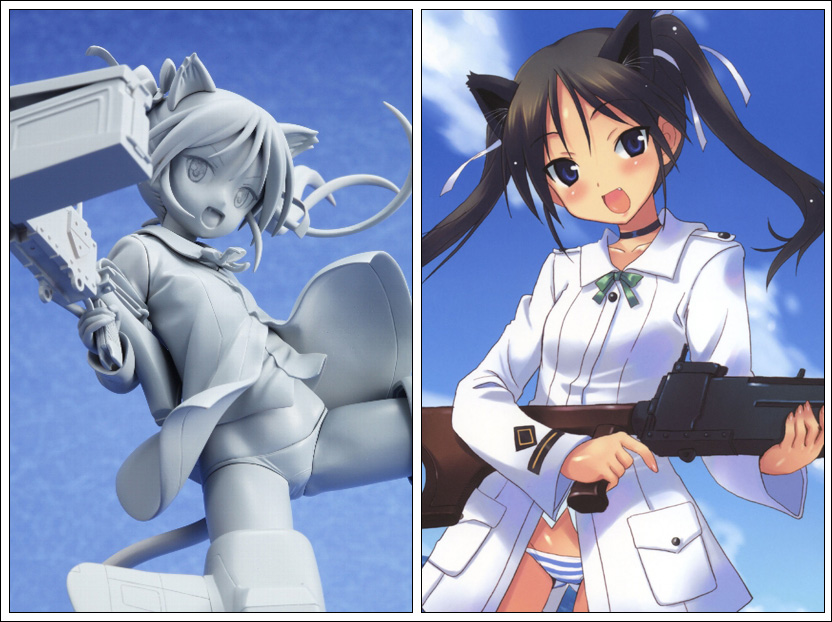 The good stuff comes at last, I always wanted a NICE figure of Lucchini, the mischievous and cheerful loli character of the witches. The prototype looks already very cute and portrays the character of Lucchini very well. It will probably be turned into a promising Strike Witch, ahh her machine gun is so huge. Too bad that I sold her bosom buddy Charlotte to someone in Hawaii. 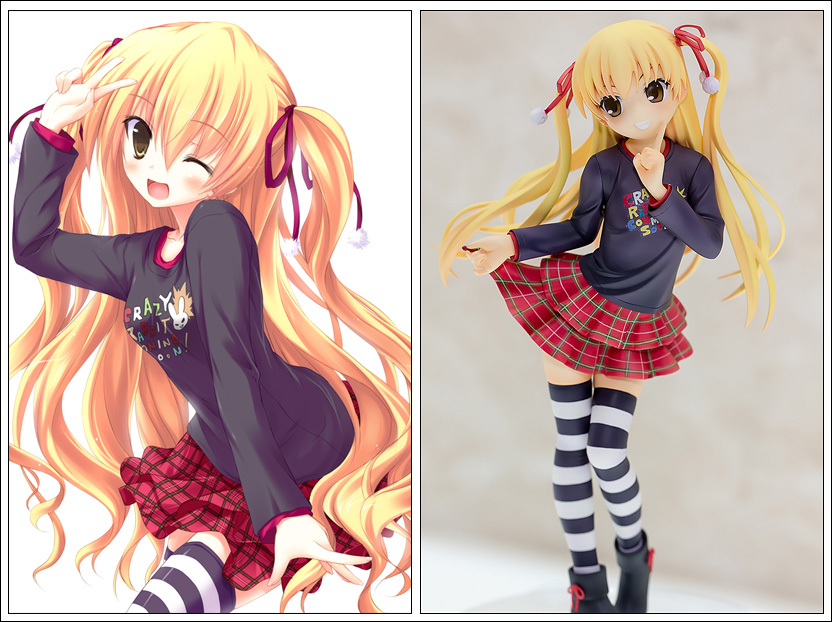 Miu ≧(´▽｀)≦, Miu is a fine young lady with a sophisticated sense of fashion, I really liked her personality from the anime. The saucy lunatic smile is a bit unique for a young character, it’s like she says  “I don’t mind but you’ll get arrested for sure” A bit of improvement here would help her face I think, even though it would be funny to have a loli figure with such an expression. 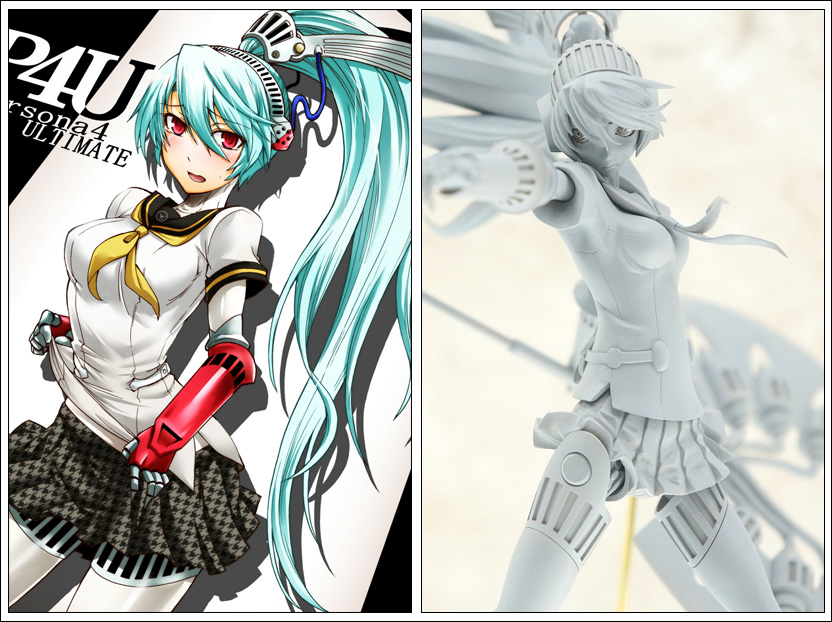 Im honest, I don’t know whats this about, but it’s cool, the mecha girl characterdesign is totally cool, I like Labrys. The commanding pose and the huge battle axe make this figure even better, I hope the paintjob will bring out my positive image of this figure  in the final state, as well. 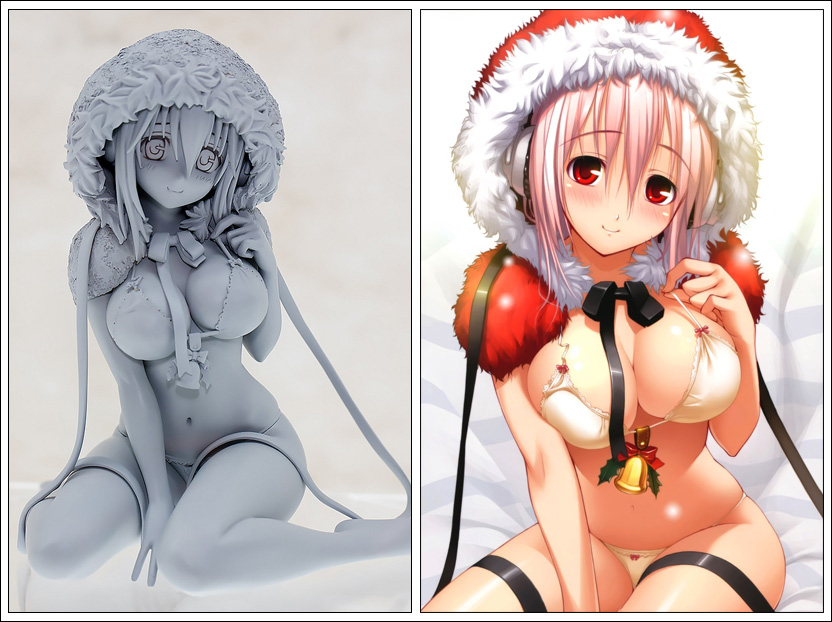 A Sonico figure from ALTER, who would have ever expected this any time!? This is a nice figure for sure, half nude, but with a non teased facial expression this is quite a nice change of pace compared to other figures of her, even though her best figures show her in a teased of embarrased state. There are also Sonico figures I don’t like, because of too exaggerated proportions or questionable poses, but let me say this, these hipster Sonico fans who say thing like “that would be the first Sonico I’d ever buy cause the others look cheap”, “if Sonico would have smaller boobs I’d like her”  totally annoy me. Accept how Sonico in general is or get lost.

This Game seems to have a really nice characerdesign, even though I never played it. I like how Aty looks her as redhead magician with a fluffy hat and glasses, glasses are the best. The bright blue eyes, her face reminds me of Hattori Hanzo, I wouldn’t have mind if Aty had a slightly more young appearance than this. Anyway the outfit is pretty cool, I love the tight fit dress with the striation design, the belts around her waiste are a nice touch as well as the high boots.
Actually no one would wear these boots in daily life, those are mainly used in red light districts, it’s too bad. All Hail anime fashion, your characters can wear such clothes with attitude. 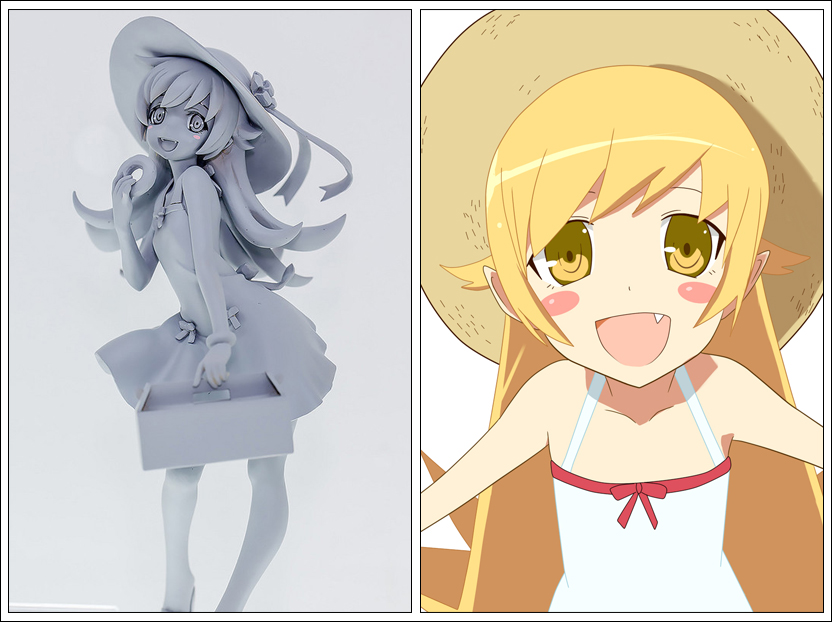 Wasn’t it a pleasant surprise as the formerly silent Shinobu turned into a naughty, talkactive Vampire wearing an bishoujo summer dress in Nisemonogatari? I love it and now here is a figure of her also wearing a ladylike hat. In gray she already looks nice, I can’t wait until she’s painted. 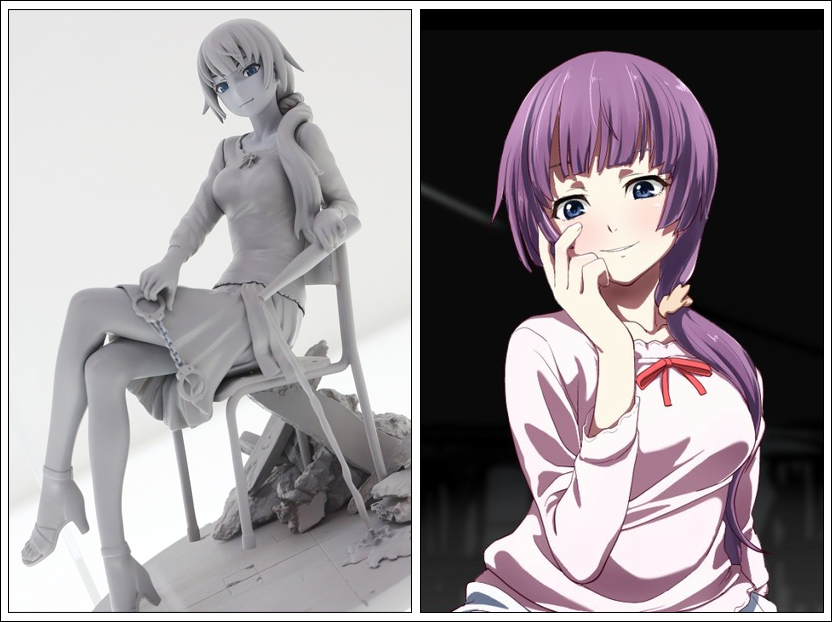 This appears also like a nice figure from Nisemonogatari. Senjougahara sama is portrayed with her caring yandere side, to keep her boyfriend from doing dangerous exorcistic activities. I like the whole presentation of this figure, sitting on a chair with a piercing look in her eyes. 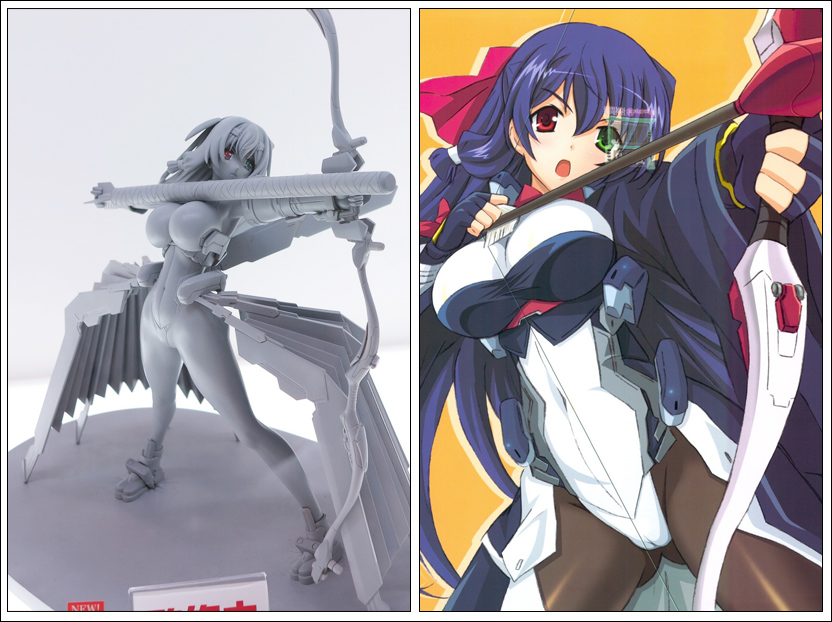 Kotobukiya’s second Kyoukai Senjou no Horizon figure, Tomo is posed in a powerful shooting stance, while her very female curves are accentuated nicely. It’s a nice looking  prototype, but still It’s still not my kind of dream figure from the Horizon anime, I want something standing in a more casual fashion. Sometimes I’m just too picky with figures where I know the origin. 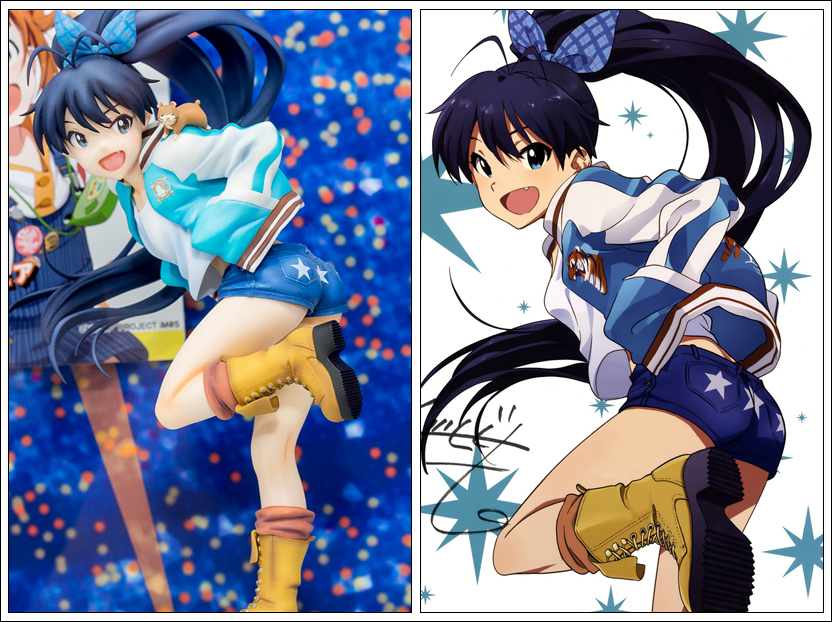 I enjoyed Idolm@ster the anime a lot and Hibiki was among my favorite characters next to Haruka. Here the unique style of the show is captures very well, yeah the mouths are big, either you like it or not so much. The clothes of Hibiki are cool, Im a big fan of her heavy duty boots and the hotpants. The energetic pose is another thing I like about this figure of  Hibiki. 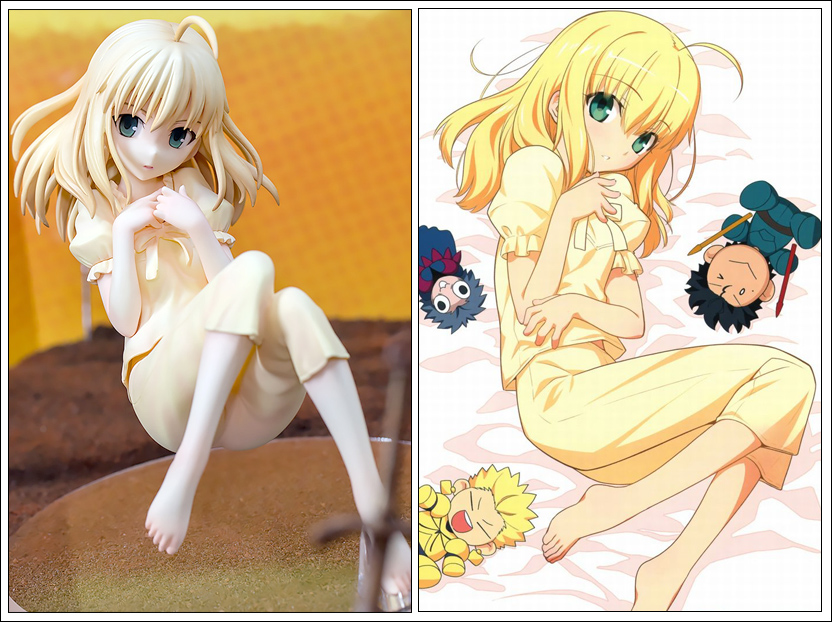 GK adaption ! Yay! I have a weak spot for Saber in alternative outfits, Saber in pajamas is something unexpectedly cute. She was made several years younger, her vulnerable and shy pose awakens protective instincts ^^.  The floating pose can be interpret as dreaming, but I think she needs a bed. 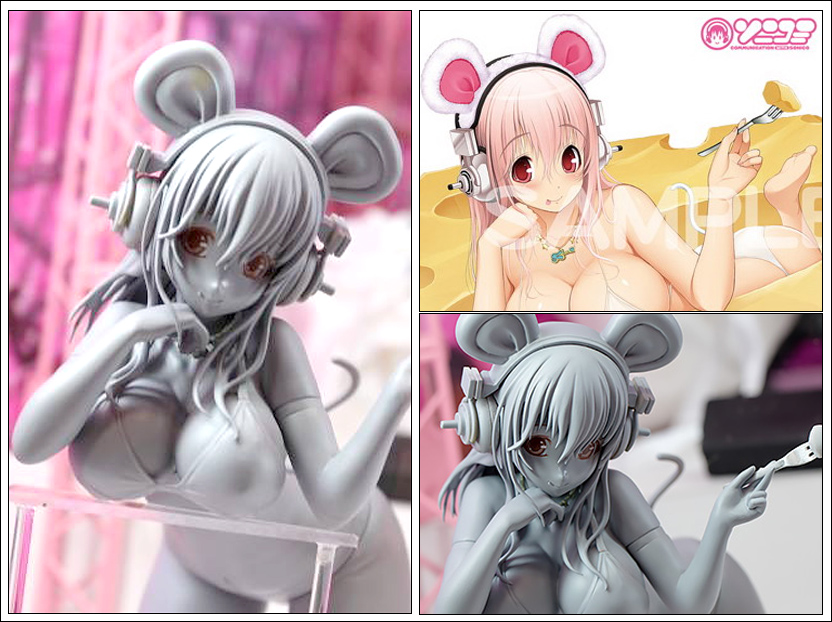 Sonico with mouse ears, I like it ﾍ(ﾟ∀ﾟ*)ﾉ.I approve of all the changes that were made compared to the source material, the hair is more three dimensional, a better face expression, toned down breast size and an altered pose. The arched back accentuates her well defined butt nicely. 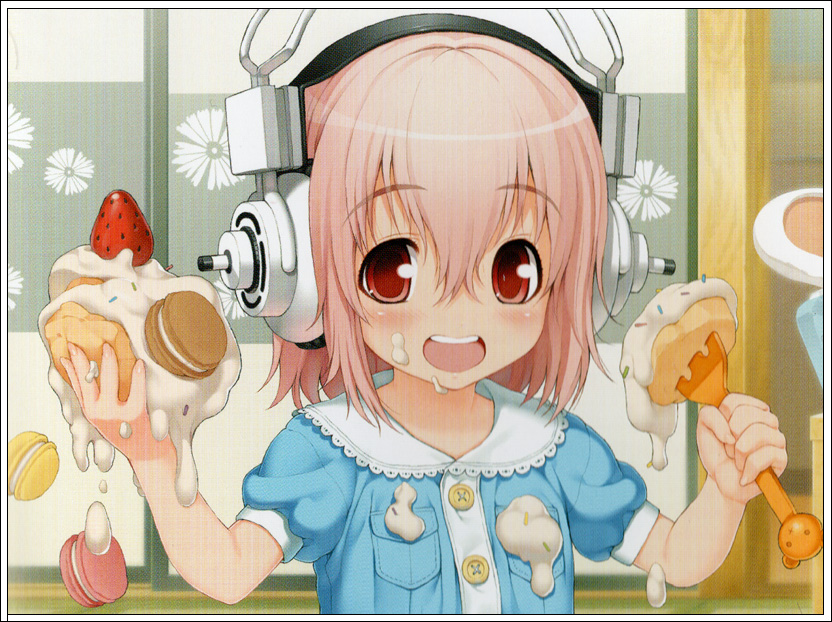 Making figures of characters as child is a new or maybe very unique idea, child Sonico is based on an illustration from the booklet which was included in the Sonicomi game. Ahh why huge headphones again, you should listen to what your parents say about a healthy diet. Sonico must have old headphones or she’s a cyborg, whatever joking aside it will depend on the pose if I’ll like this or not, her face actually looks adorable, somehow I prefer her grown up though.

That’s it for part one of the Wonfes 2013 Summer, I hope there was something in for you, tell me what you liked. If not there will be a part two with more figures.