Today‘s figure review is about Akaza Akari, the sweet announcer and heroine of Yuru Yuri.

The naughty anime always makes always fun of her lack of presence, but actually Akari is the most popular character. She was featured in a number of figures and other related products.

This Akari was manufactured by ALTER , she was also delayed like so many other figures from them, anyway she was finally released in June 2013. Akari is scaled 1/8 and has a height of 18 cm. 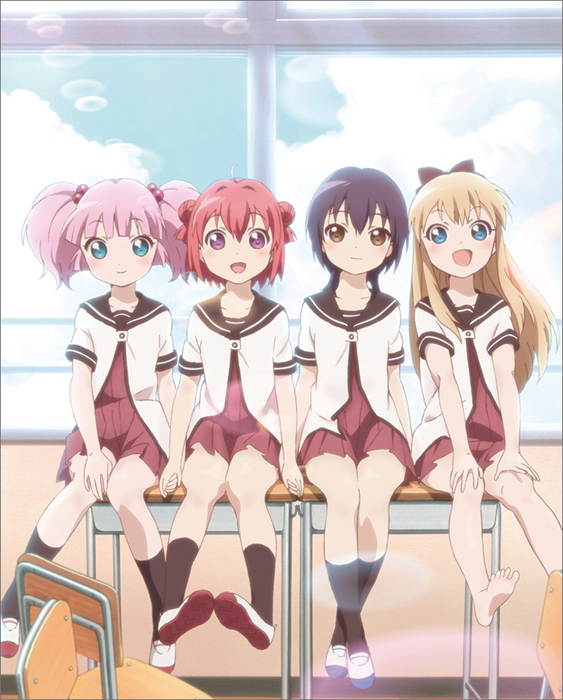 I’m quite attached to Akari Akaza, cause we have a lot in common, I’d even call her my anime soulmate, it seems bad to find someone like this in a silly comedy show, but underneath the” no presence” running gag, Akari has a beautiful personality. Akari is polite, kind and also cares for others,  she likes animals, even the creepy ones (snakes). Even when her kindness is often unrequited Akari won’t change trying to be a good person. What we also have in common is that we always stay sheerful, even when the world around us isn’t always nice to us. These are things I can relate to. Well, maybe I also have a lack of presence, but that is another topic. 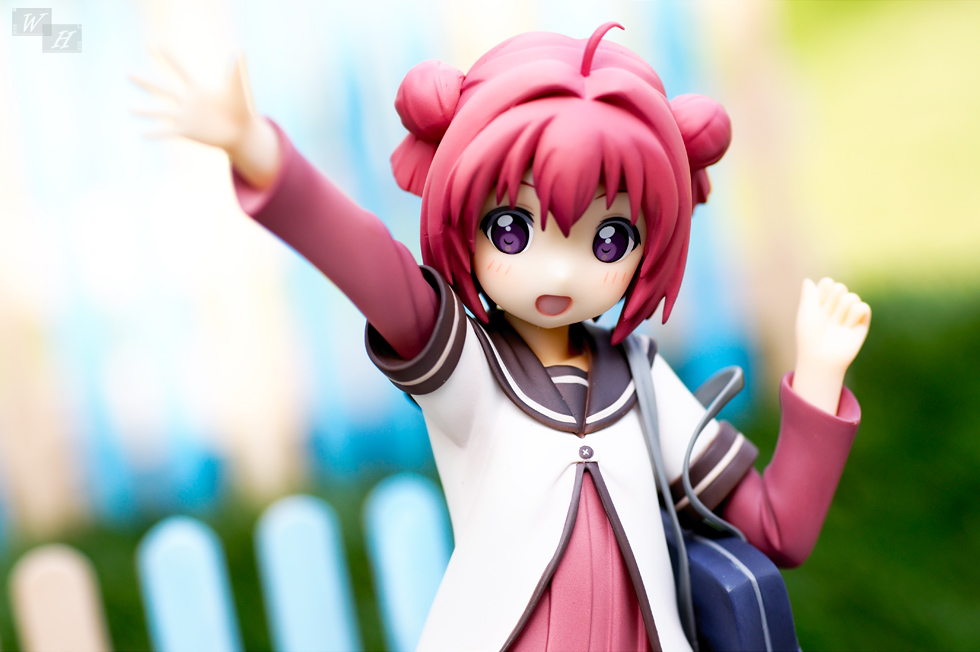 I’m 200% picky with figures of my favorite characters and rarely by such figures, but Akari received a wonderful figure adaption. Whenever I sit at my desk and look at her I say Akarin !!!
In a melodic tone. Let’s have a closer look at Akari’s qualities in the next 100 sentences (lol) . 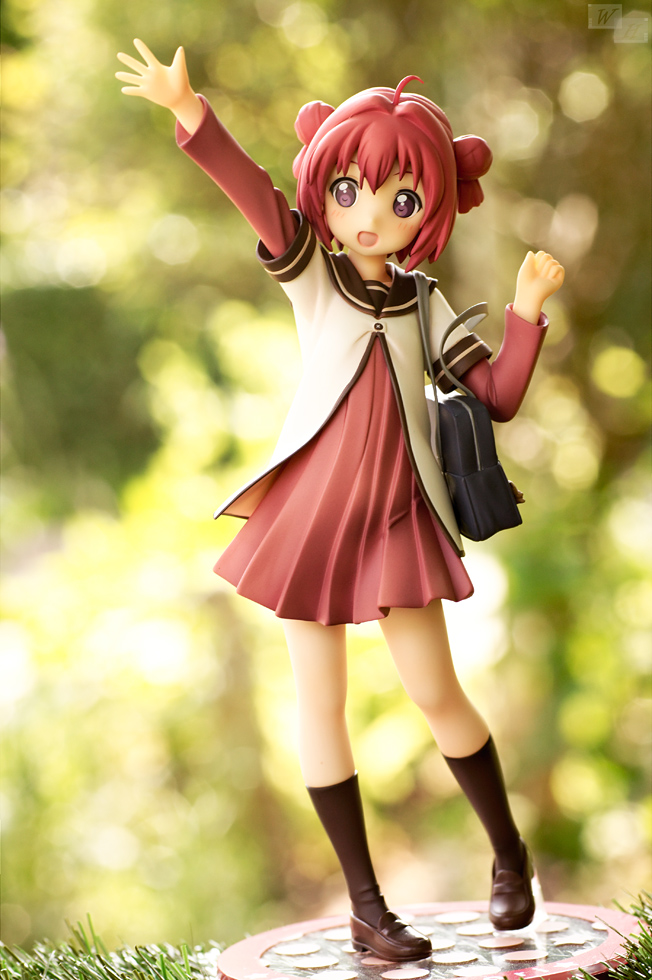 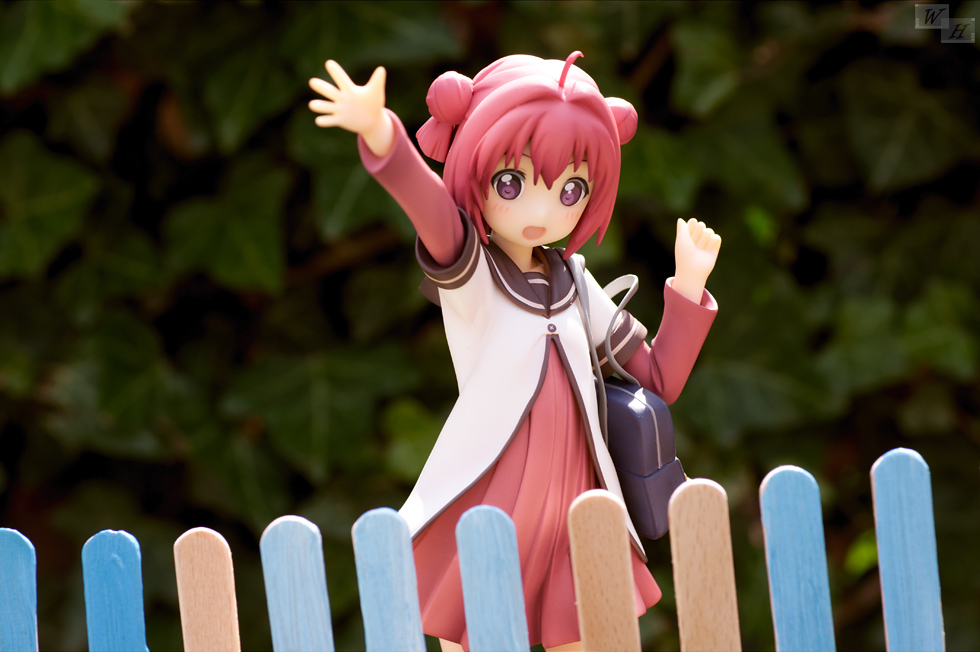 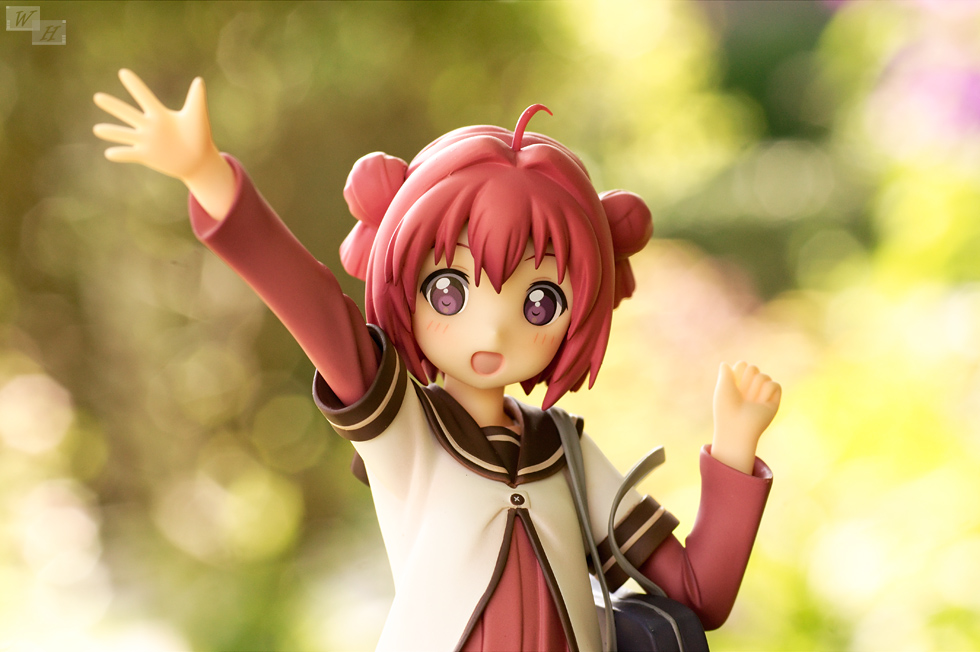 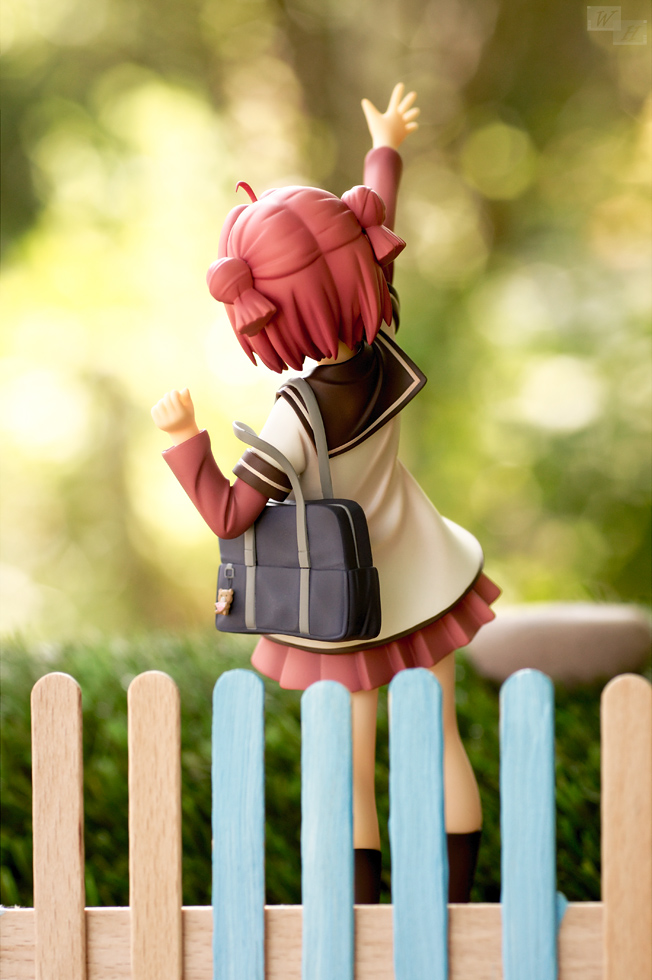 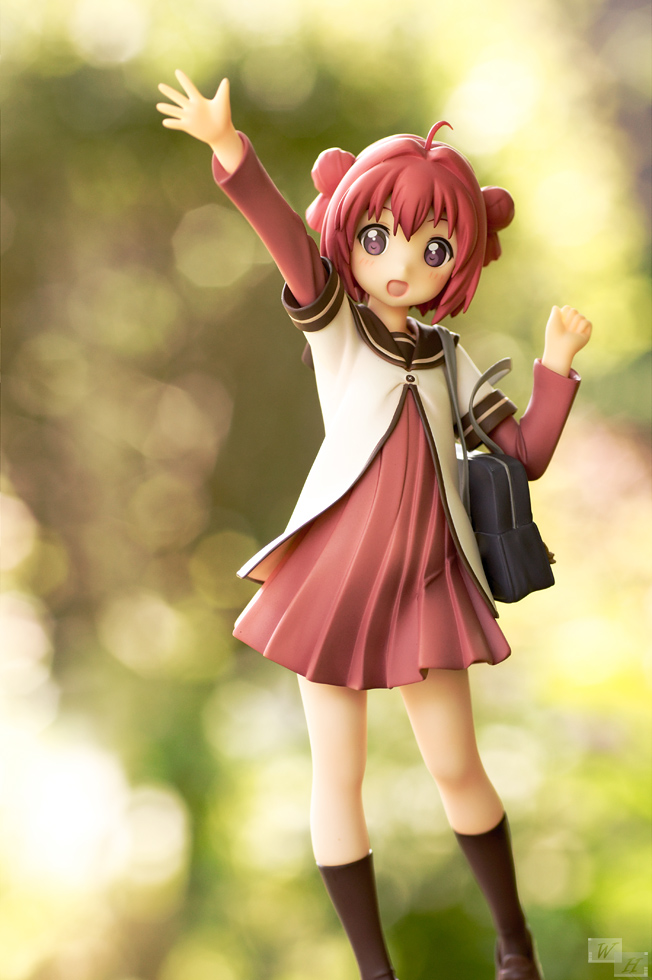 She has a red short haircut with many rounded, tapering strands around her face, at the sides there are little pigtails, Kyoko one of her friends calls her buns rockets, but of course they aren’t. There is also a thin ahoge on top. On her red hair there isn’t much shading applied, it only seems to be present at the strands tips.

The face turned out really nice, with the three dimensional sculpting it appears a bit squishy. Akari has purple eyes, designed in the Yuru Yuri art style she also has soft blush marks around her cheeks and a cute open mouth. How can someone say that there is a lack of presence when Akari is so adorable 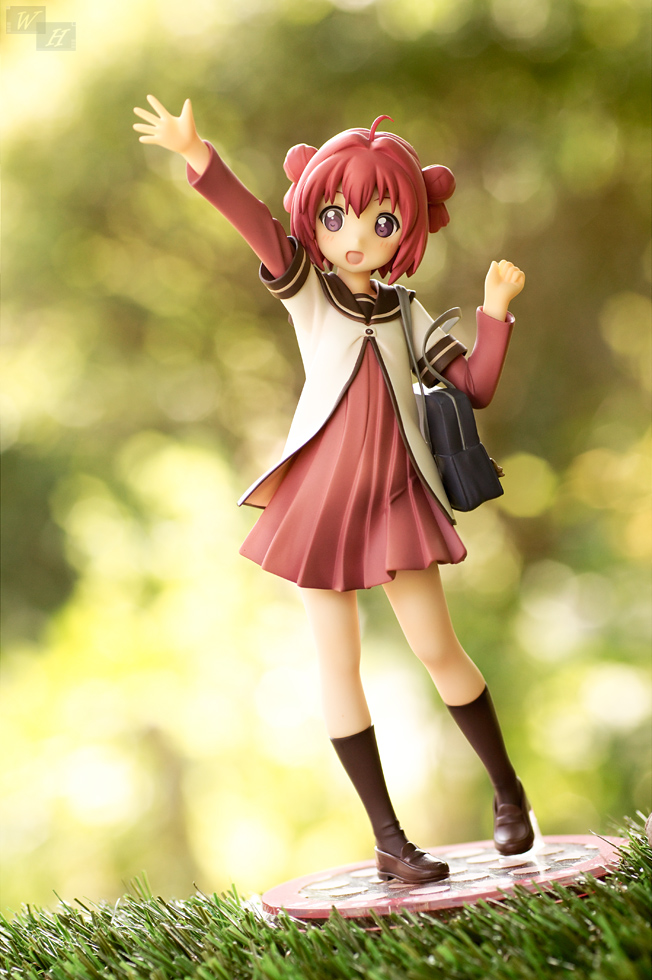 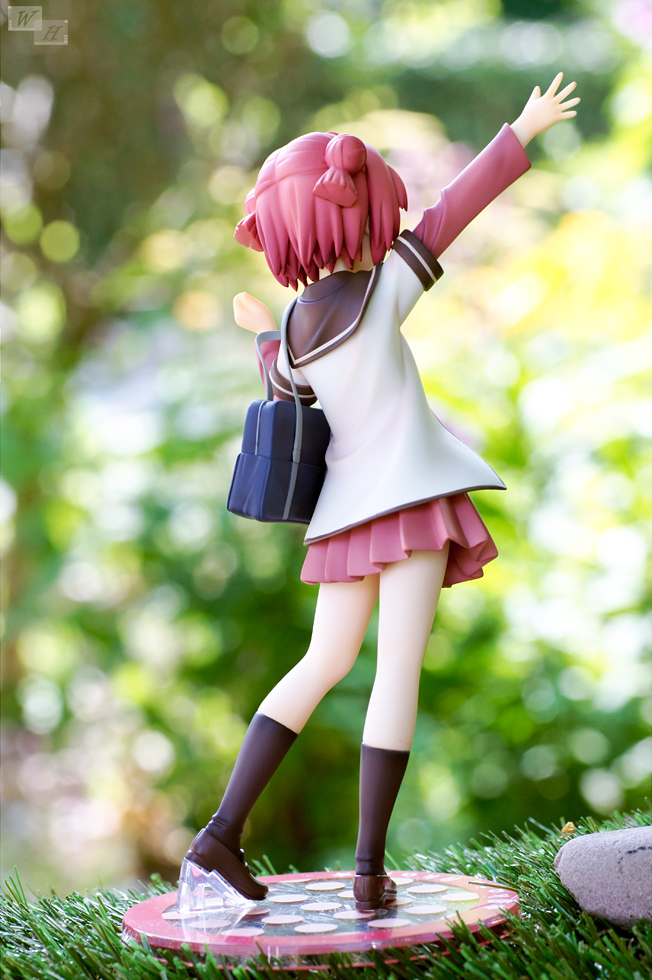 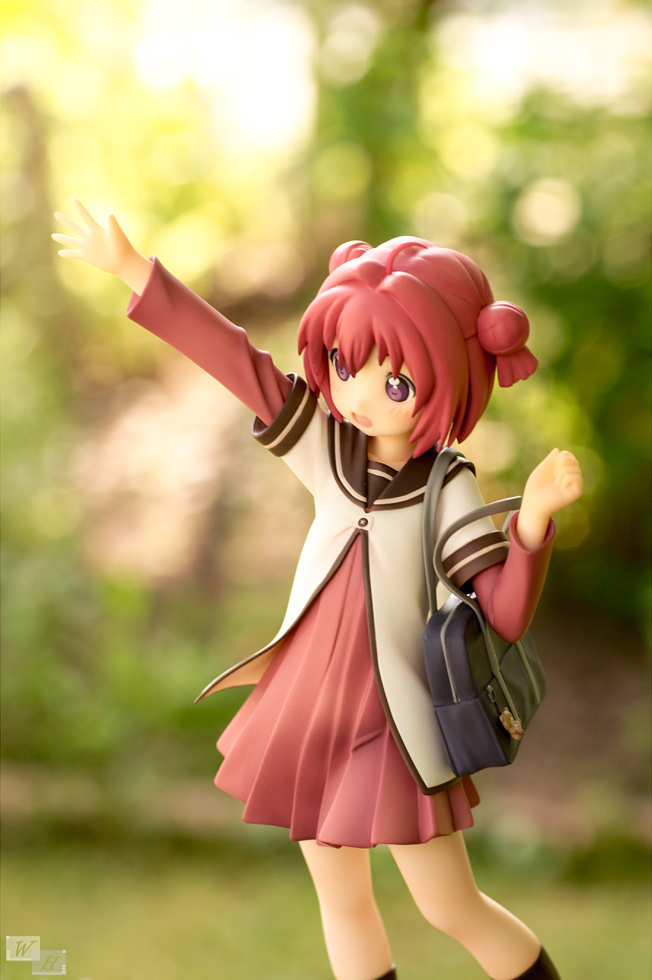 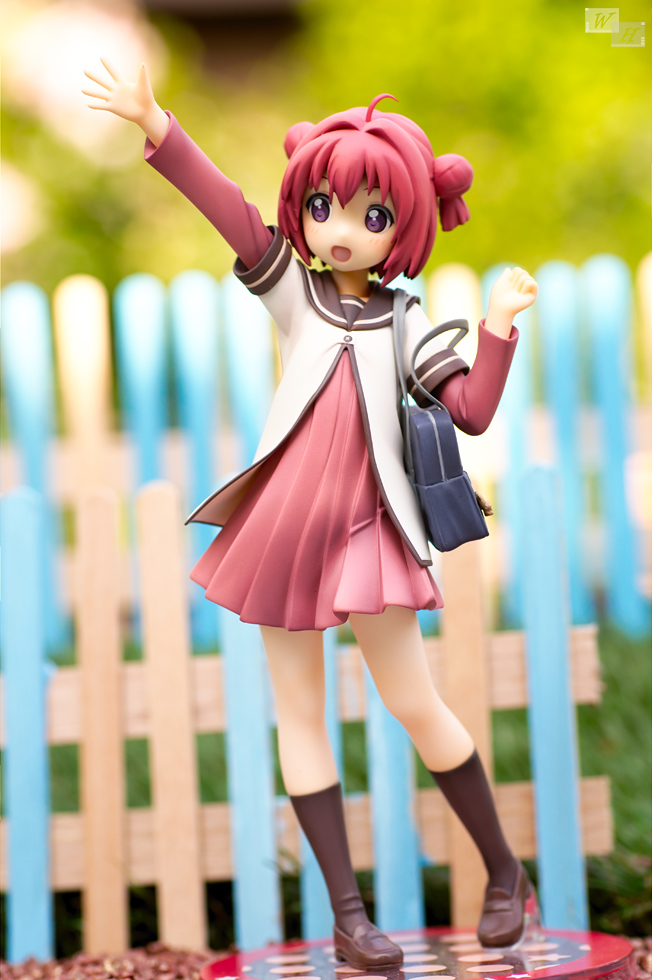 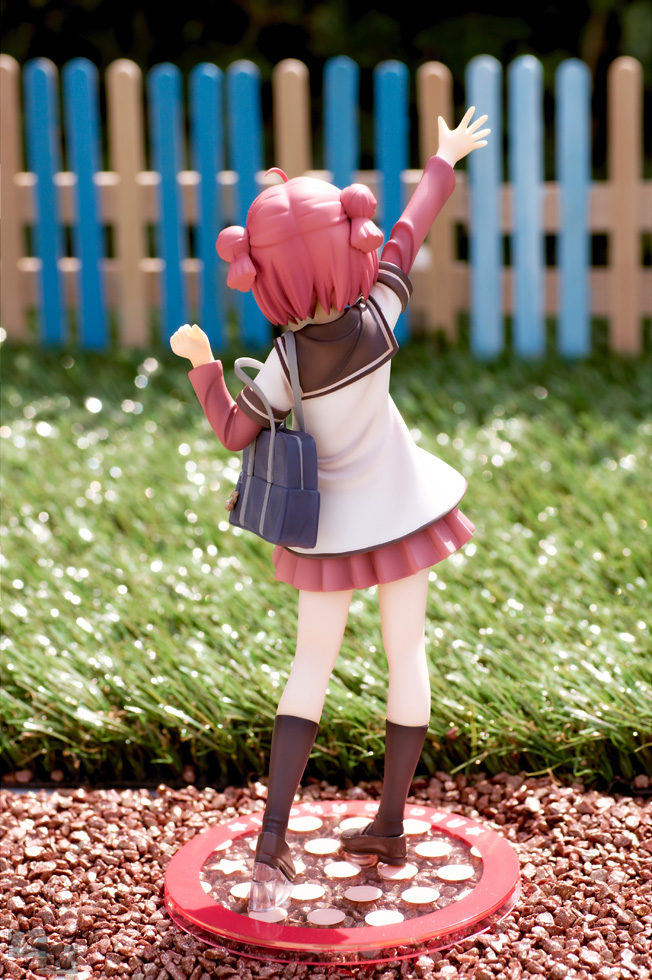 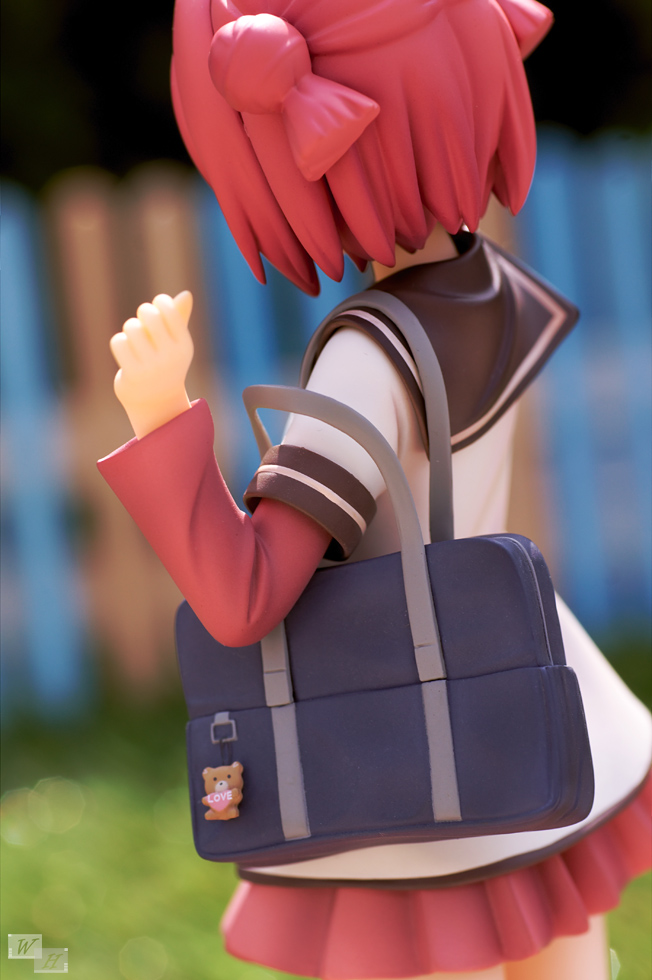 Akari is a middle school girl, so her body is rather short and petite, something between a loli and a teenager. Well I haven’t ordered her for being sexy, but I like her innocent and cute charm.

Yeah as you can see Akari is another school uniform figure, but this is nothing bad since her very uniform is really chic in terms of color palette and design, she is wearing a nice one buttoned, sailor uniform over her long sleeved red dress. Im actually a fan of such double sleeve outfits. The wrinkles and flow of it are marvelous and the harmonic colors gives the whole thing a nice look. As little eyecatcher Akari has a navy blue school bag, which she carries over her shoulder, it is very detailed, the little teddy bar is something that will make women hearts jump higher.

The figure is sculpted in a standing pose, with her outstretched arm and waving fingers she cheerfully greets her friends on her way to school. I like this captured moment a lot, since it shows a part of the characters personality. The base is a cool eyecatcher, it is a clear disk with a red outer circle, that also shows her name and inside the circle are pink polka dots. 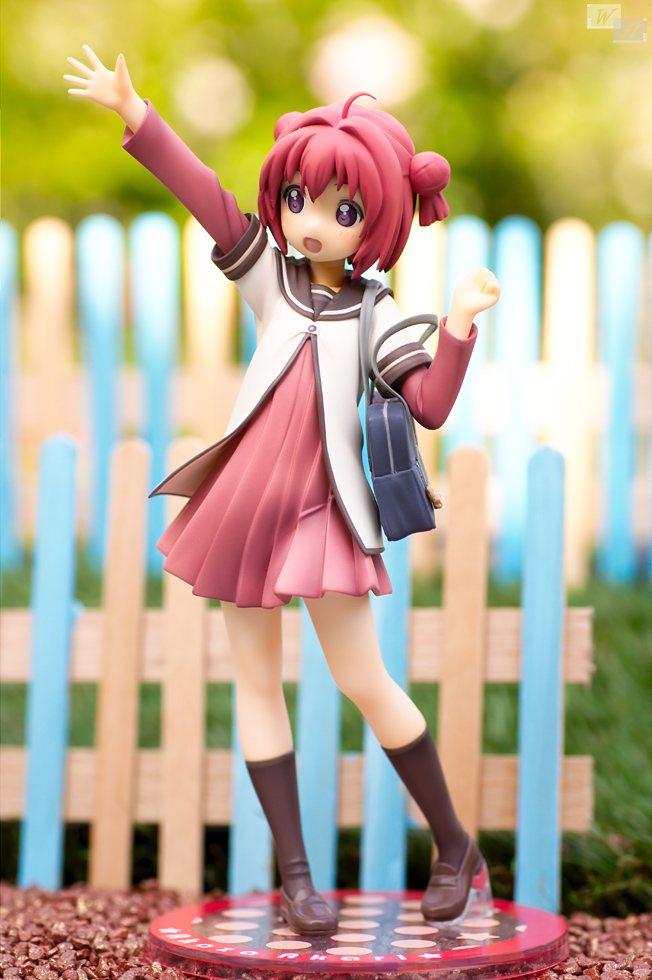 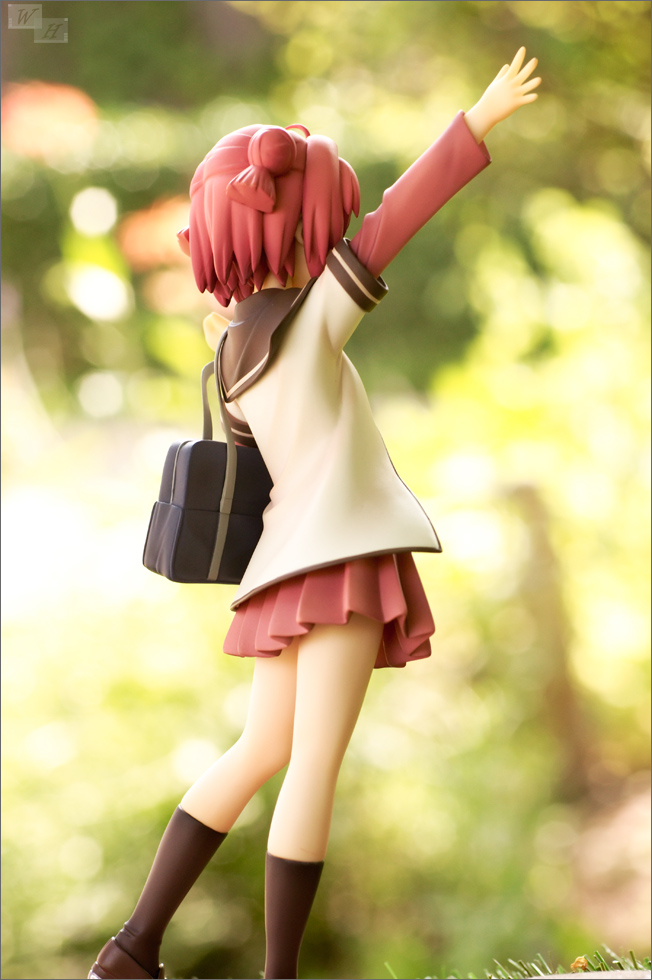 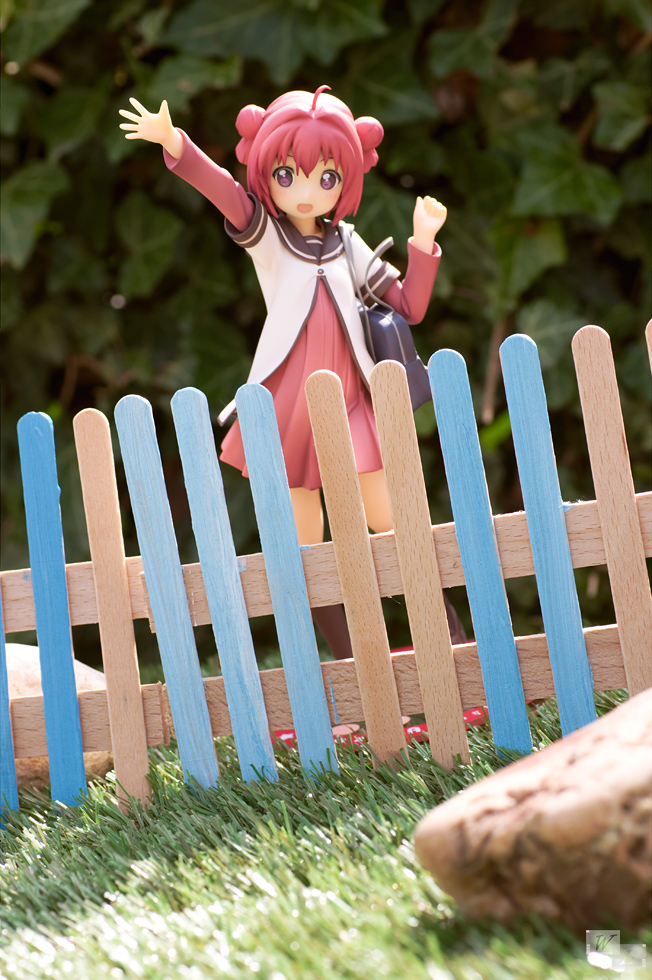 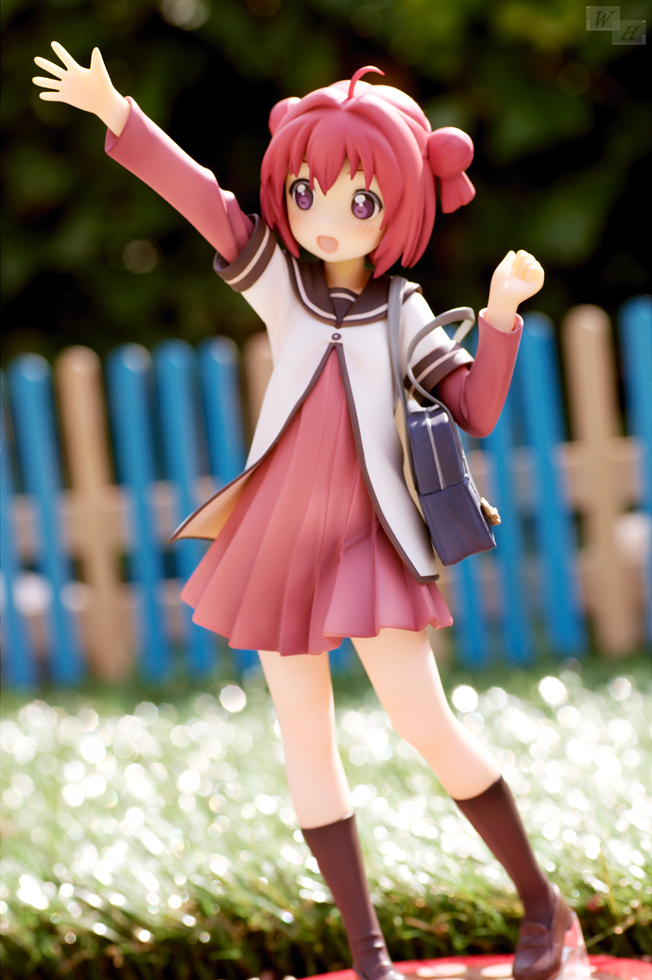 What brought me too Yuru Yuri was Chinatsu, but as I learned that her personality is rotten to the core, my interest was quickly directed towards Akari, she is cute and I could partially identify myself with her character, which actually never happened to me in anime show before, at least not to such an extent.

ALTER made a great figure of Akaza Akari, the figure of her is sweet and petite, she looks really cute and her cheerfulness was nicely captured in this pose and her facial expression. The creative outfit is great and offers many details, the use of wrinkles and flow of the clothes create a convincing scene of Akari in her natural surrounding. I’m totally convinced by this figure. 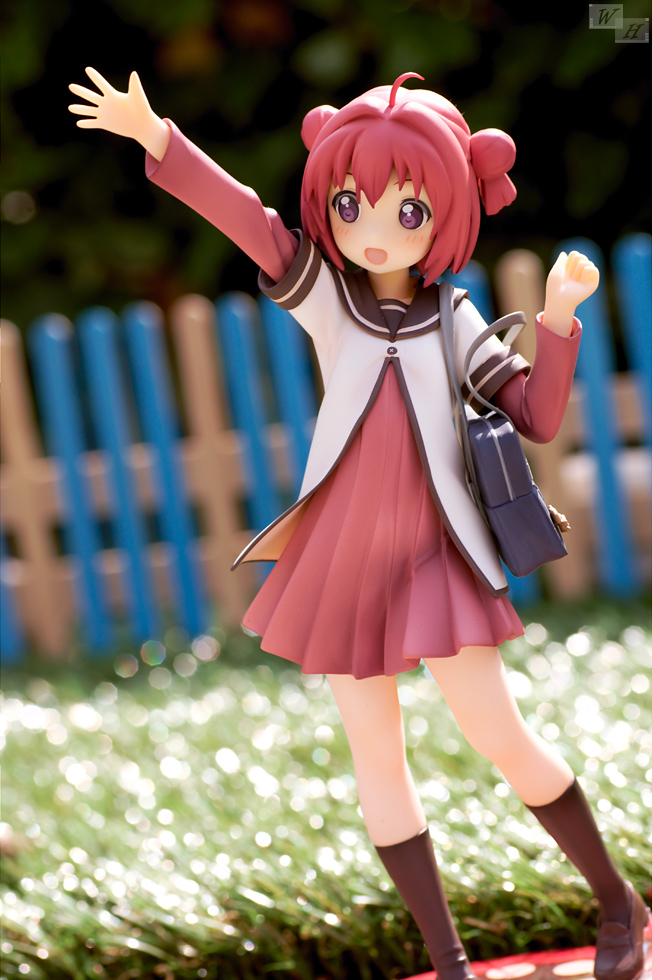 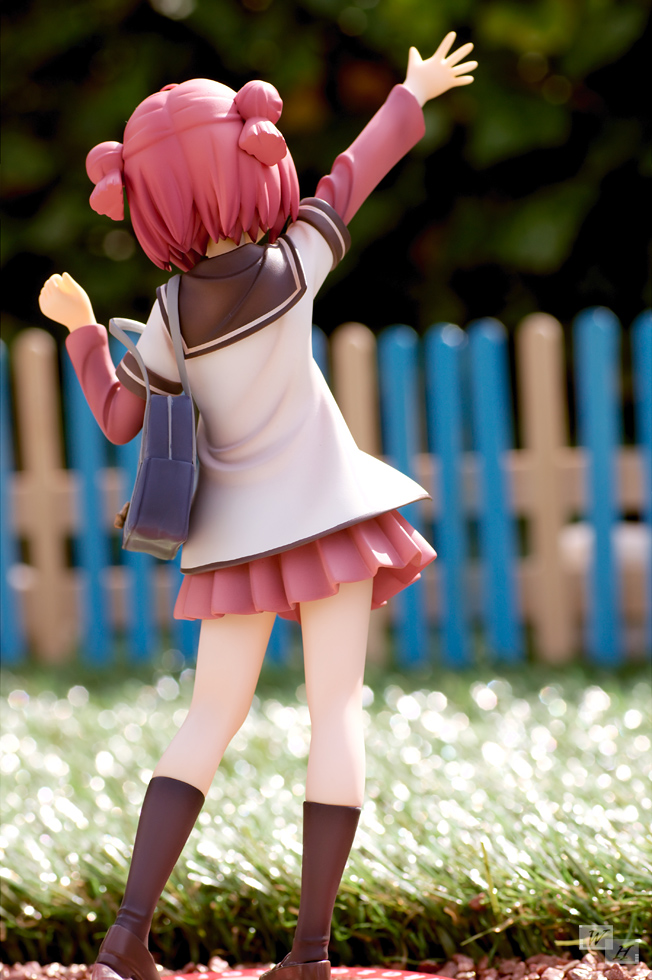 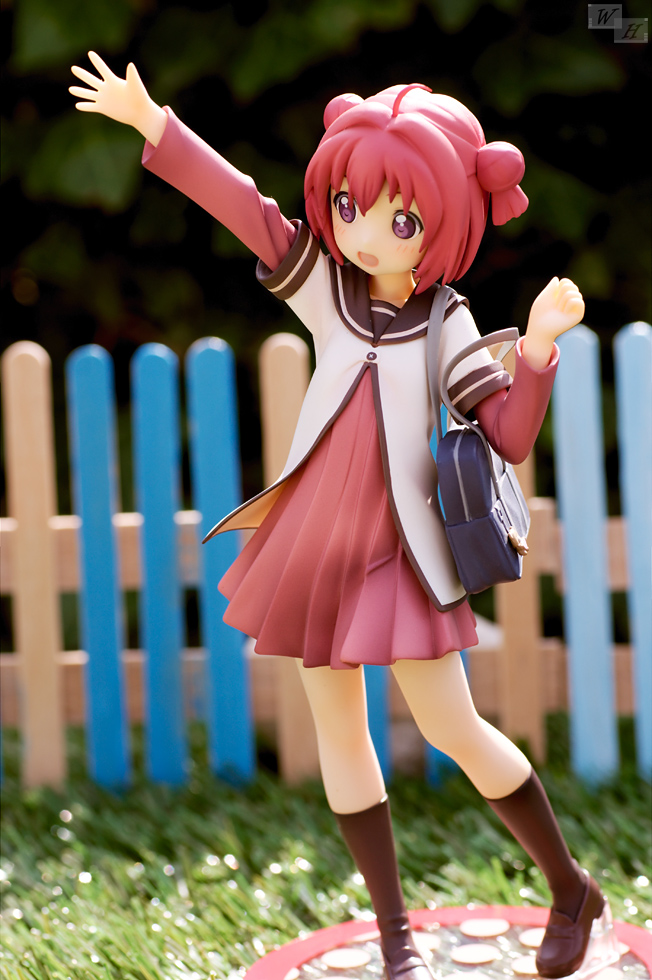 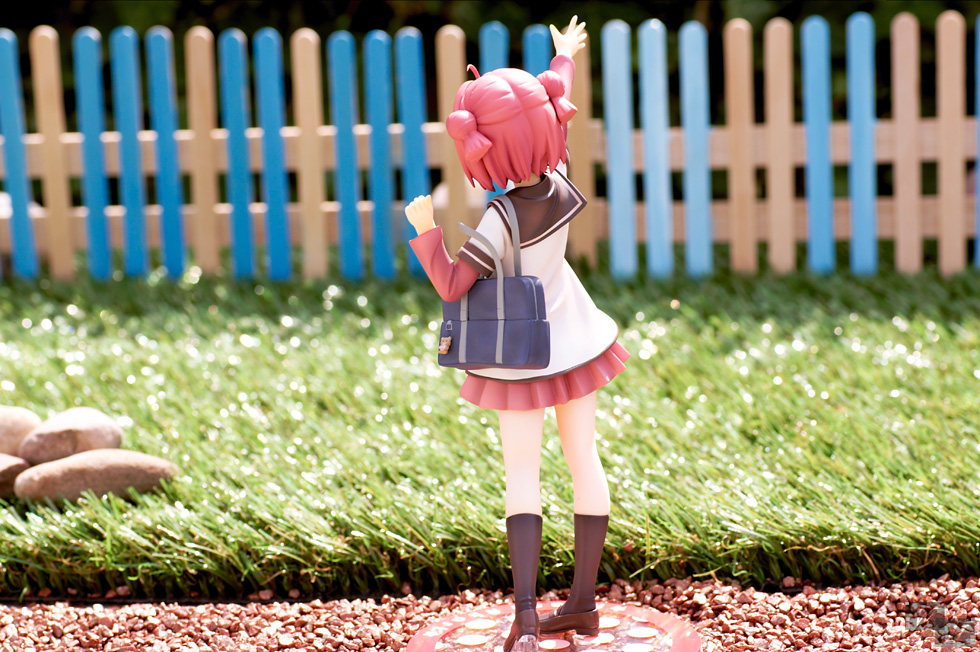 Do you like Akari from Yuru Yuri? If yes I would really recommend this figure.