This is already the third Native figure in my collection, after the Sonico – Bath Time and
Yoshii Hotori, Cat Lap Milk, the latest figure from Native wants to please the buyer.

Often their figures are a little to bold for my comfort zone, but sometimes I found their figures so beautiful that I throw my doubts out of the window to get my excellent quality, ecchi girl.

How do you think about it, do you feel comfortable with Figures with some lewdness? 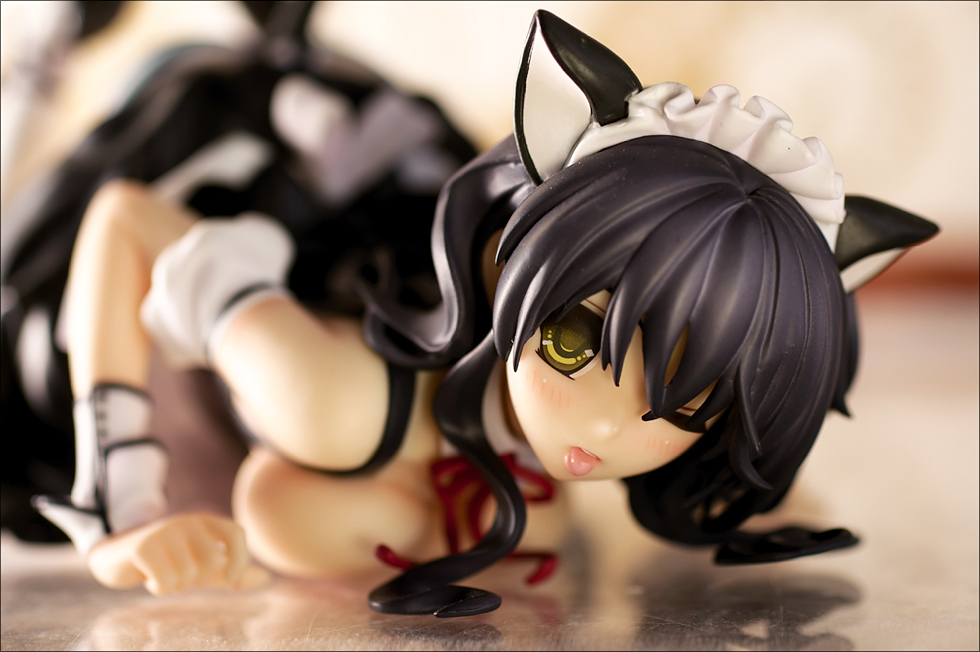 Cat Lap Milk is scaled with a solid 1/7, she comes in a pretty, classy box, a base, two milk boxes, two puddles of milk, spare panties and yummi spare boobs (more about that later).
The figure was sculpted by Katsuaki Nemoto  and released in the end of September 2013. 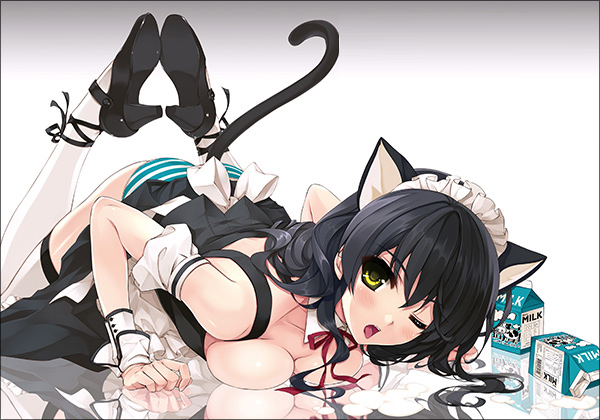 The figure has many things that I also like in anime pop culture, she’s is wearing maid clothes, has cat ears, has nice boobs and a striped panties. 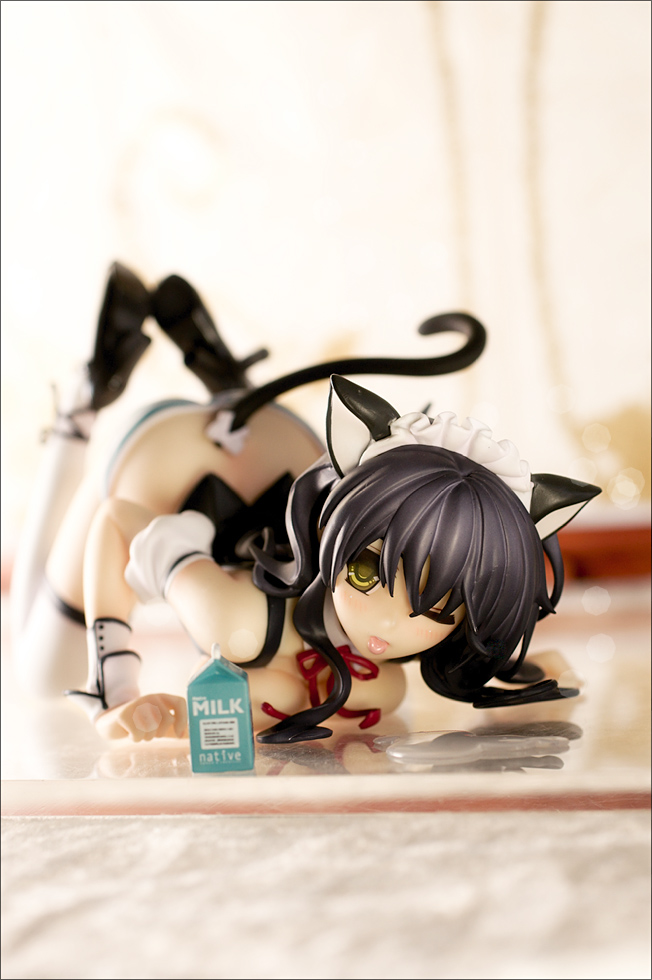 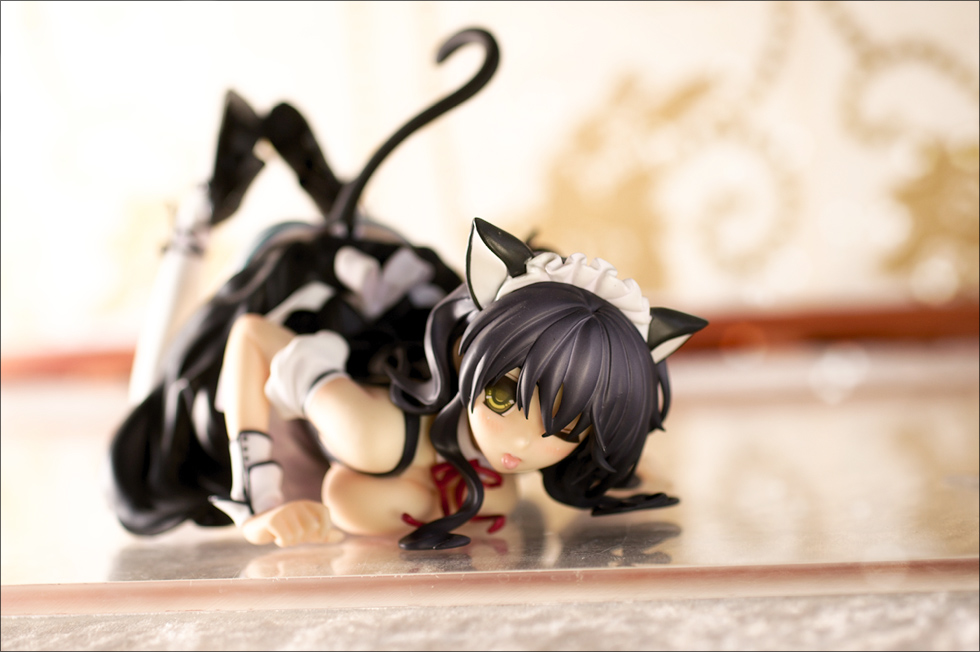 The figure has an appealing yet wild  hairstyle, it is  elaborately sculpted hair, as you can see there are a number of strands and curls.The haircolor is a mix of black with a small percentage of grey and blue. This maid is a fake cat, she has real ears and is just wearing a pair of nekomimi.

I leave the interpretation of her facial expression to you, I guess she’s having fun in her little fetish play. I like this created look, together with the maid cap, she is a lovely cat eared maid. 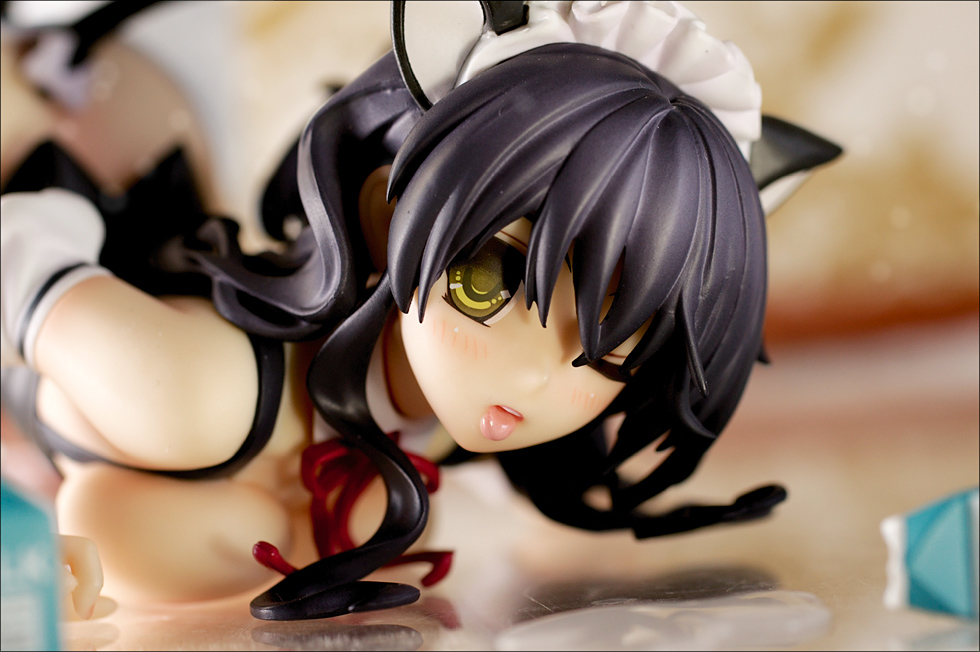 She has a closed eye with huge eyelashes on the left and one nicely detailed, open eye on the right. There are blush marks on her cheeks and a pretty nose is also part of her face. The mouth is open, with the cute, small tongue out, the detail there is quite nice, also a little bit of her upper front teeth is visible, a thing I totally like to have on open mouth figures. Aside from 3 – 4 tiny blobs at her front hair, the quality can be considered very good, these minor things, can actually be neglect. She’s so beautiful, I think it turned out better than in the illustration （‐＾▽＾‐）. 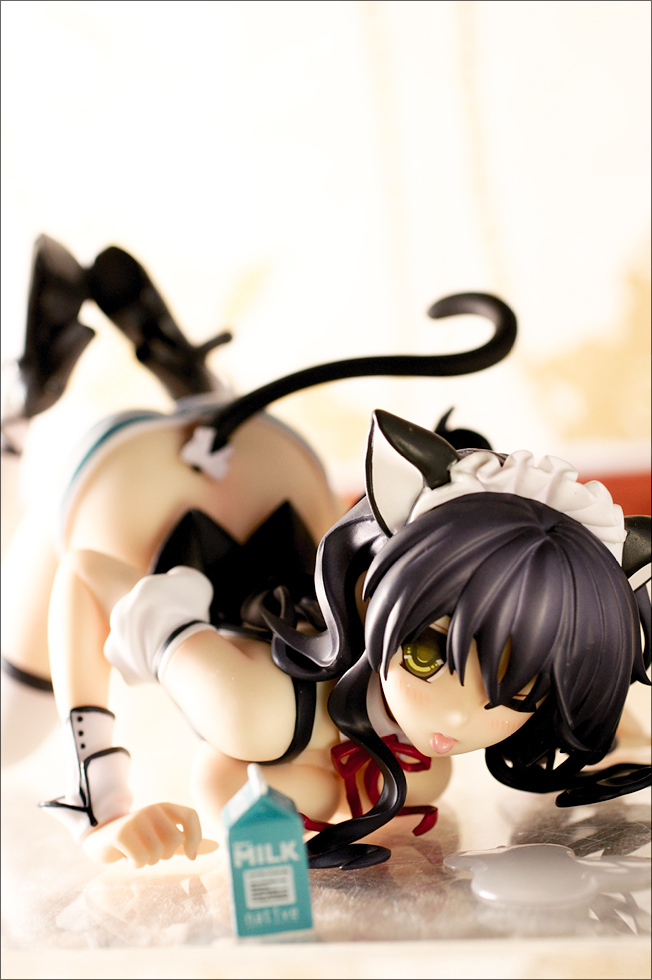 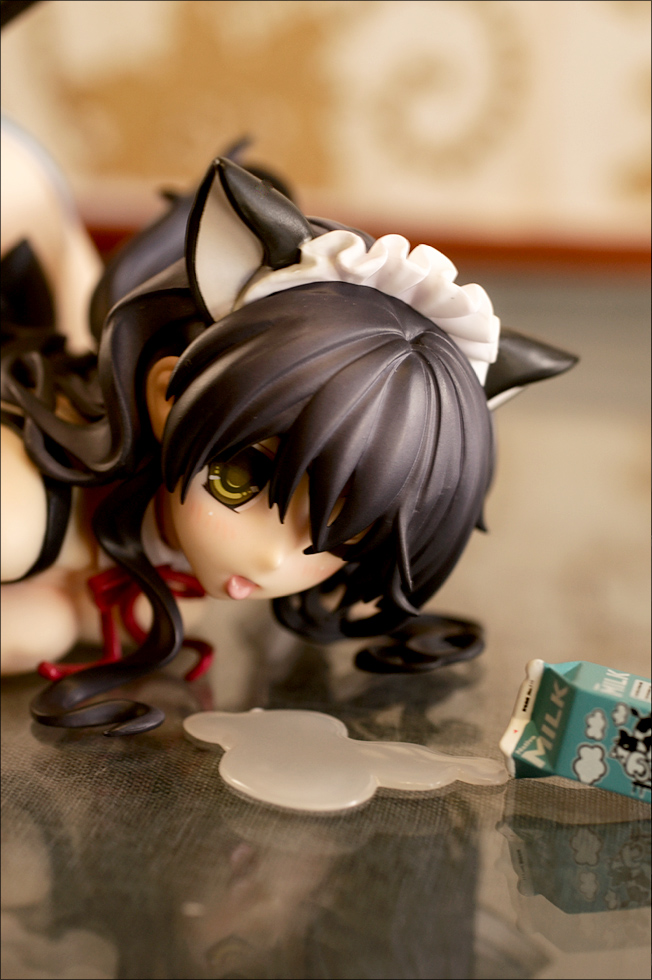 Cat Lap Milk is dressed as classical maid with skirt , maid cap and other related things, a decent blouse is the only thing missing, instead the naughty maid features squeezed boobs. 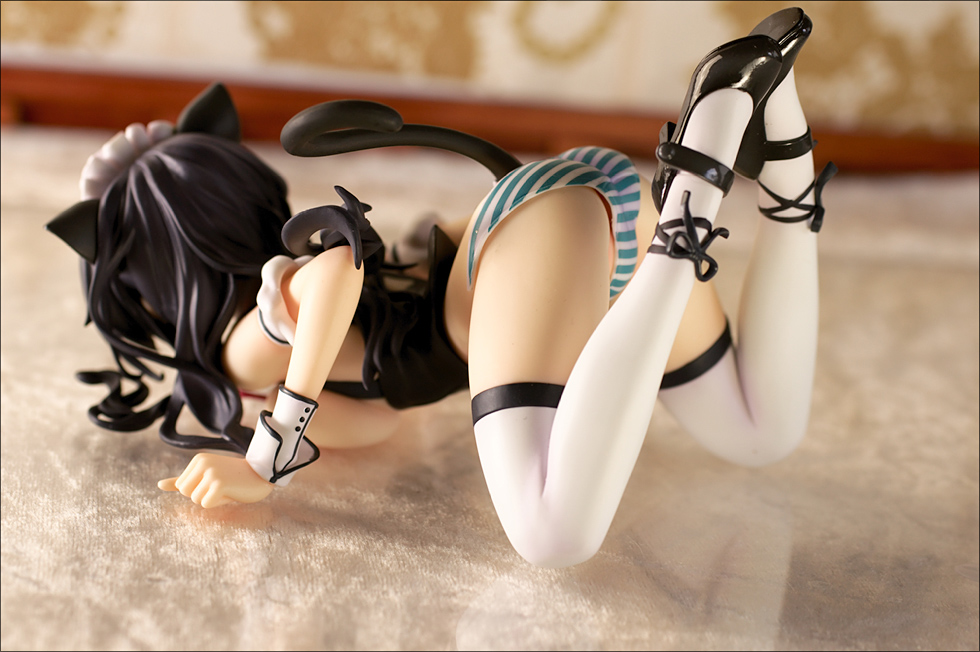 I love her outfit with all the details, starting from the shiny shoes to her lovely white stockings with a black line at the upper rim, the striped panties, thanks to Native  for making this figure with panties option, otherwise it would be complicated to display her with pride. The shirt cuffs at her wrists are one of my favorite little details of her outfit, as well as the frilly maid cap. 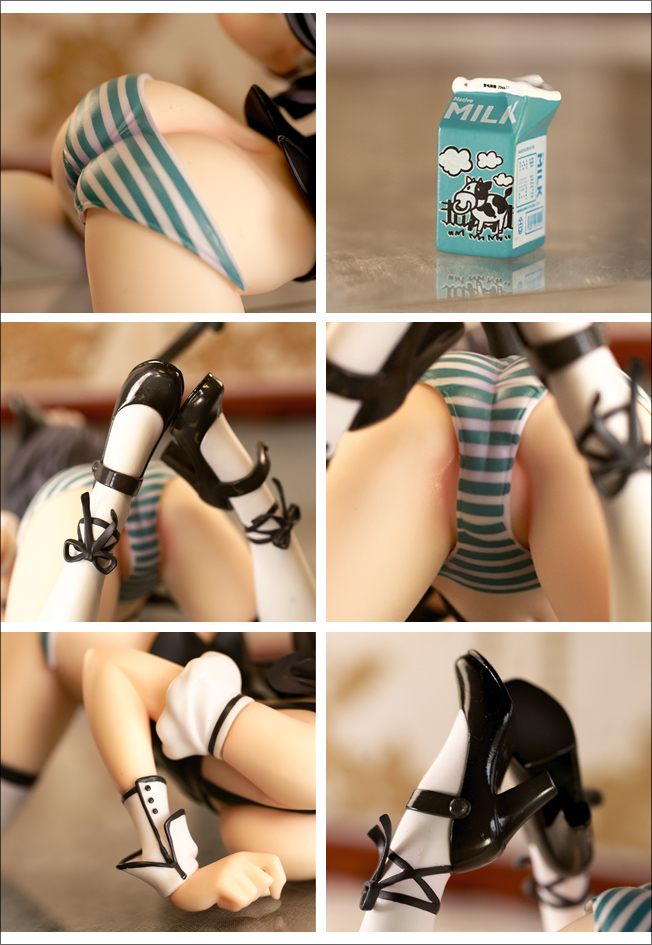 the panties are made of ABS, hard, sharp and breakable as it is, it still fits accurately and doesn’t look cheap, Sure the open sides are a compromise to the cast off option, but it is nothing really bothering. Since I’ve heard that pulling the panties off causes  scratches at her thighs and I actually hadn’t the guts to take a look her vagina the first time I unpacked her, would have been kinda rude don’t you think? So I left them on, but I guarantee that she’s anatomically correct. 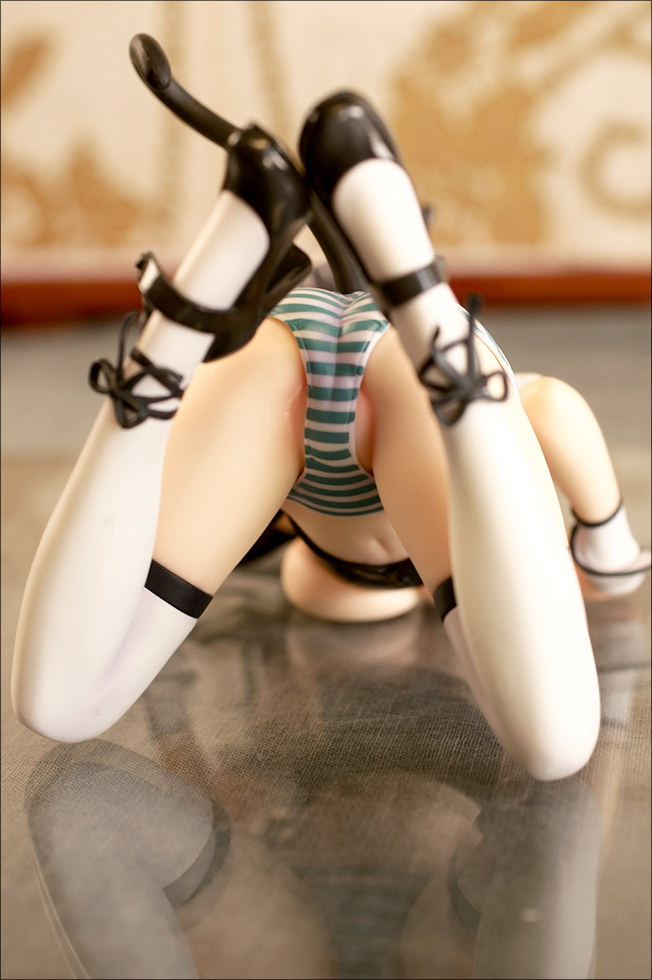 Her presentation shows her in some kind of playful fetish play involving a cat like maid licking off spilled milk, it could be a metaphor for a different liquid, but lets follow the idea of illustrator Misaki Kurehito, who also illustrated the CG’s for Deep Blue Sky & Pure White Wings and see it as milk. This fetish play is not something I’ve ever experienced, but this figures pose is a turn on. 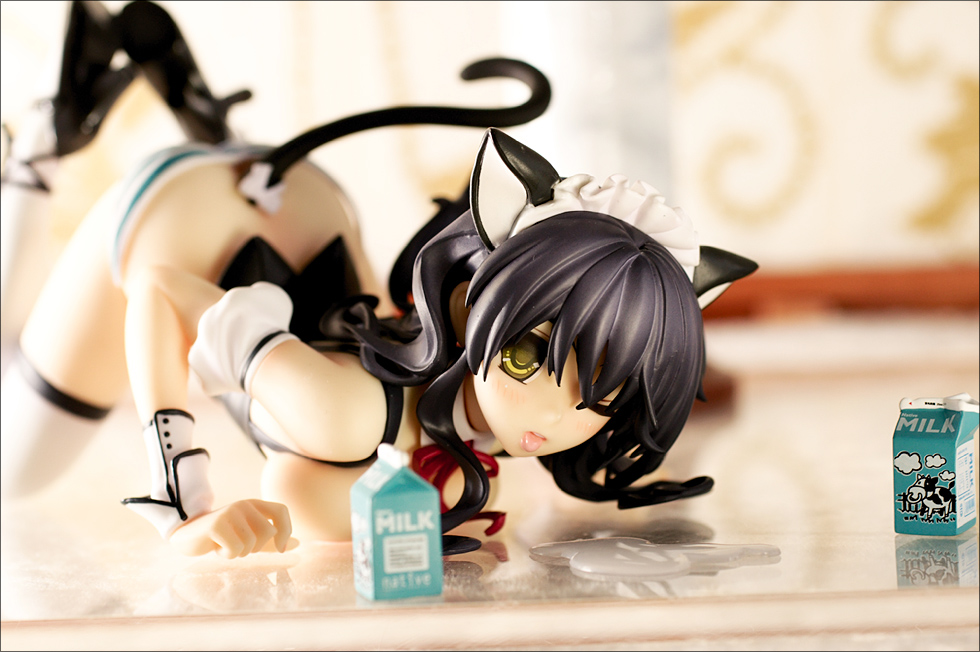 Cat Lap Milk is a sexy girl, with a narrow waist and an attractive pelvis. Her legs are of average length, a length I find very appealing. To me her arms and hands with the single fingers are especially lovely, I like the way they are posed and sculpted. 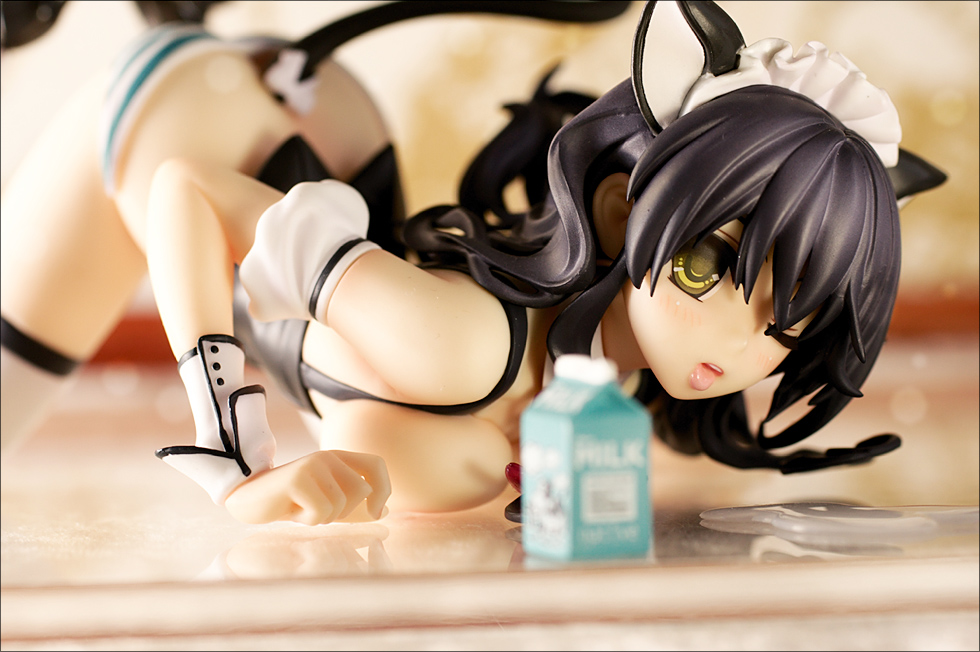 The figure imitates the movement of a cat,licking milk of the even floor as far as her human anatomy allows at least, her fairly sized boobs obviously getting in the way and are tightly pressed against the floor *squeeze* (￣▽+￣*)  maybe it’s a nice feeling I can’t tell. In this display option the boobs as only part of her body, are flattened, but her nipples weren’t ignored in terms of detail, I checked comparative images of real persons, and can say that the sculpting of nipples when being pressed against glass is done rather realistic considering the situation. 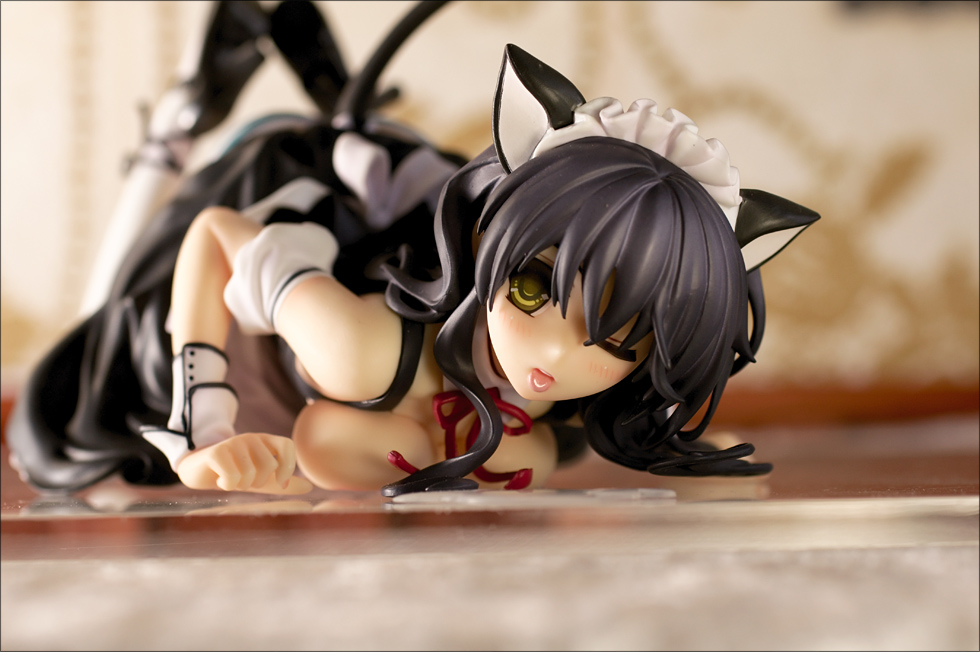 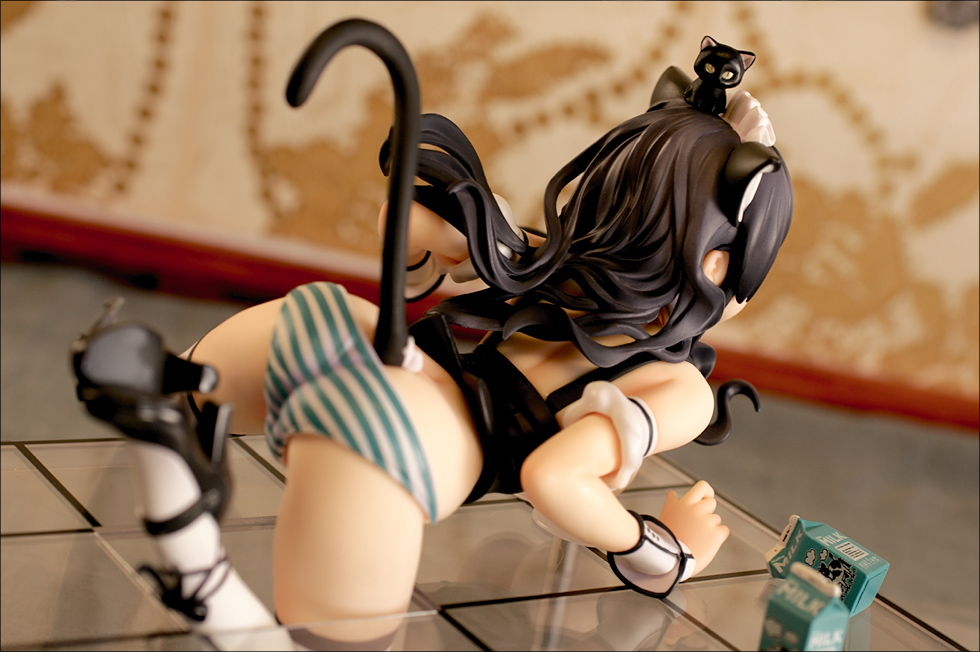 Te figures body separates in three pieces; head, torso, hips with legs. So its possible to get rid of the skirt within seconds. Without skirt, but with panties is my favorite choice for her. The panties should be handled with care for previously mentioned reasons, also the collar can be taken off, the cat tail connects via magnet force. Well, the little vest can’t be pulled off, but I think this little thing around her waist is really sexy, also the cat ears stay in place.

You can freely place milk boxes and puddles as you desire, the boxes have tiny print on it with a cute cow and text, the puddles are flat with rounded edges and semi opaque, white color. 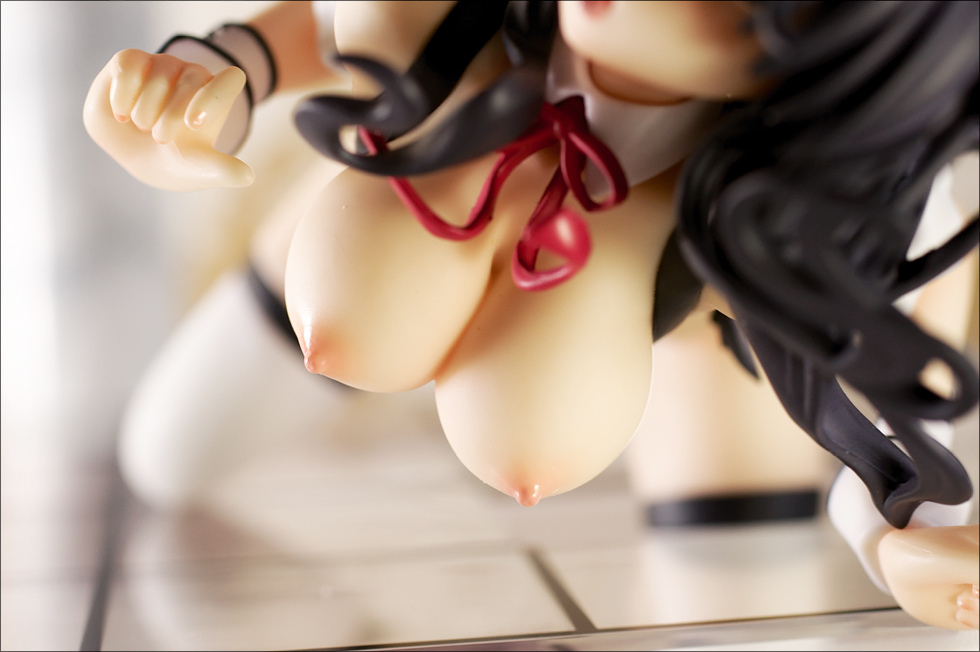 Her  boobs look great, they are beautifully sculpted, I like the shape and the light color of her areola and nipples, the shiny effect there is really sexy.

To change squeezed boobs with normal gravity influenced boobs, you have to change the torso piece and equip it with the arms which you’ve separated from the other torso before. 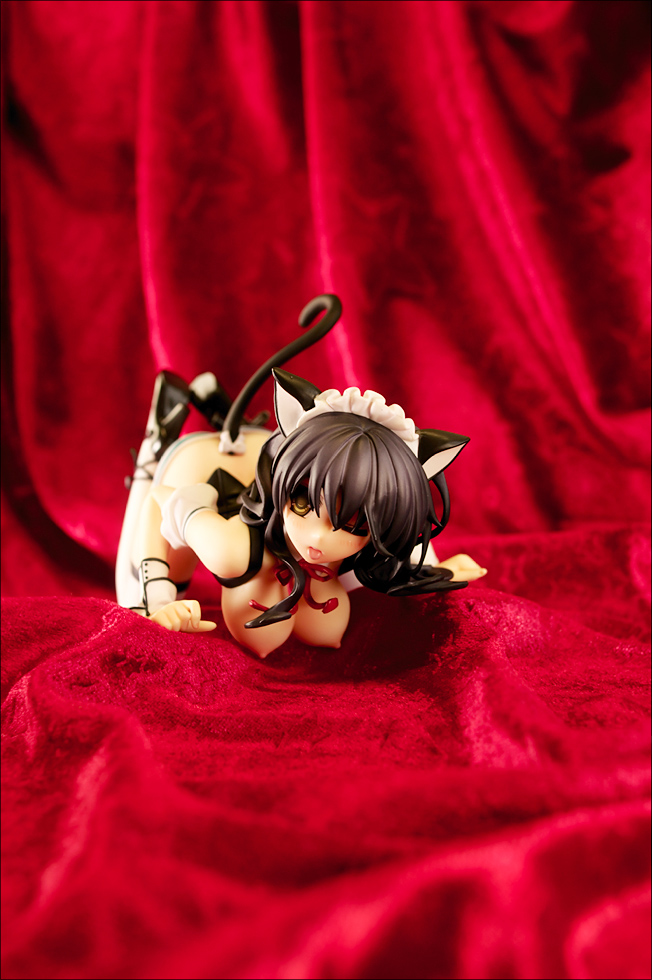 Cat Lap Milk figure’s base is a clear, square plastic base on four 4 cm high metal bolts, these are not necessary for the standard display option, only if you are going to use the other upper body (a nice way to use another words for boobs) No, again!

Lying on round boobs would be a bit odd, so Native has a trick, you can take out a square from the base and let the boobies hang around. It’s nice that alternative boobs are included, but honestly sticking your boobs through the floor is too hilarious, the mere thought is so strange. Well the better idea when you want to admire her pretty boobs another way, is to stick one of her knees through the opening, so that her upper body has a little distance to the floor. Without base you can simply put something under both of her hands and have a similar effect. 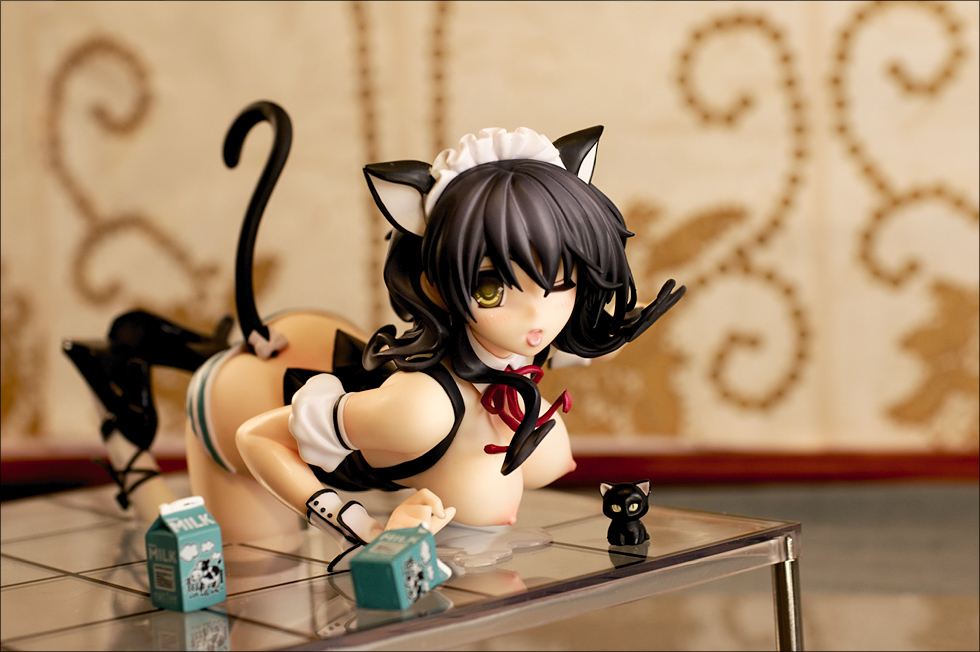 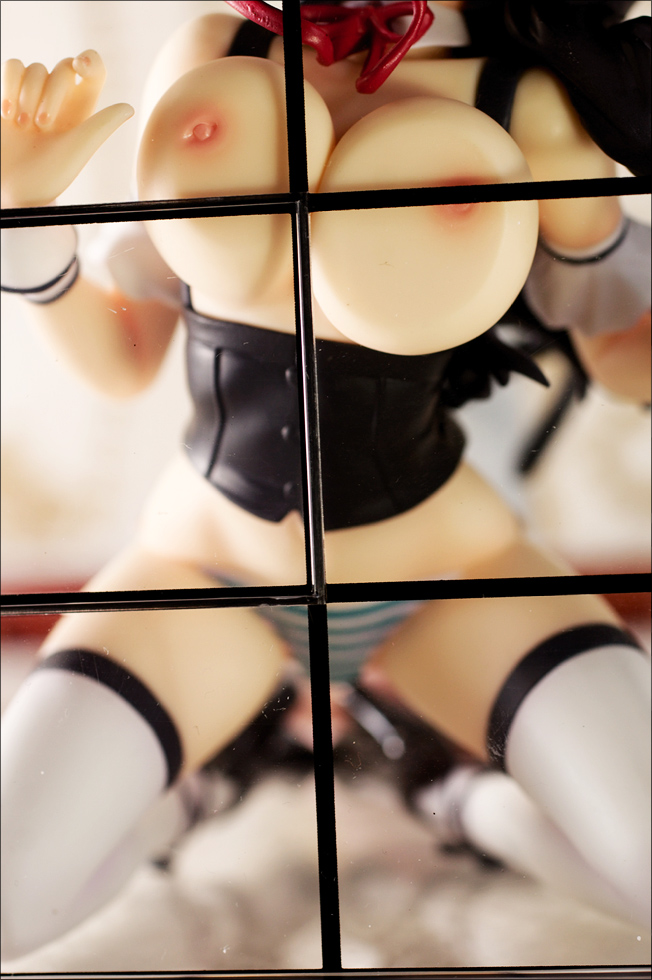 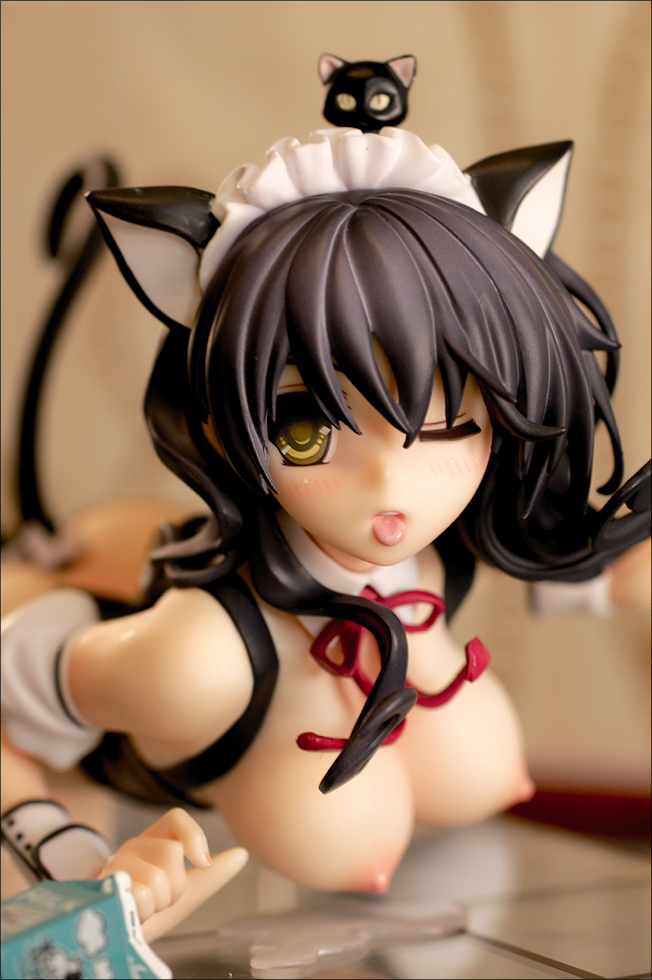 Lol I don’t know what to write anymore, well Native did it again, they delivered a first class ero figure. They mixed a dark haired, attractive character with maid attire and cat cosplay and the outcome is purrfect. As someone who has a preference for girls in maid outfits, this figure makes my heart jump, even more since the figure is beautiful, her face has a lovely level of detail.

Her body looks great and comes very close to my personal preferences in terms of proportions. The different display options look nice, still I can’t comprehend the hole in the base to let the boobs hang, huh? The base and all the included items are an additional bonus to this gorgeous figure of an cat eared maid. This purchase was worth the 10110 Yen and Im overly satisfied with Cat Lap Milk. 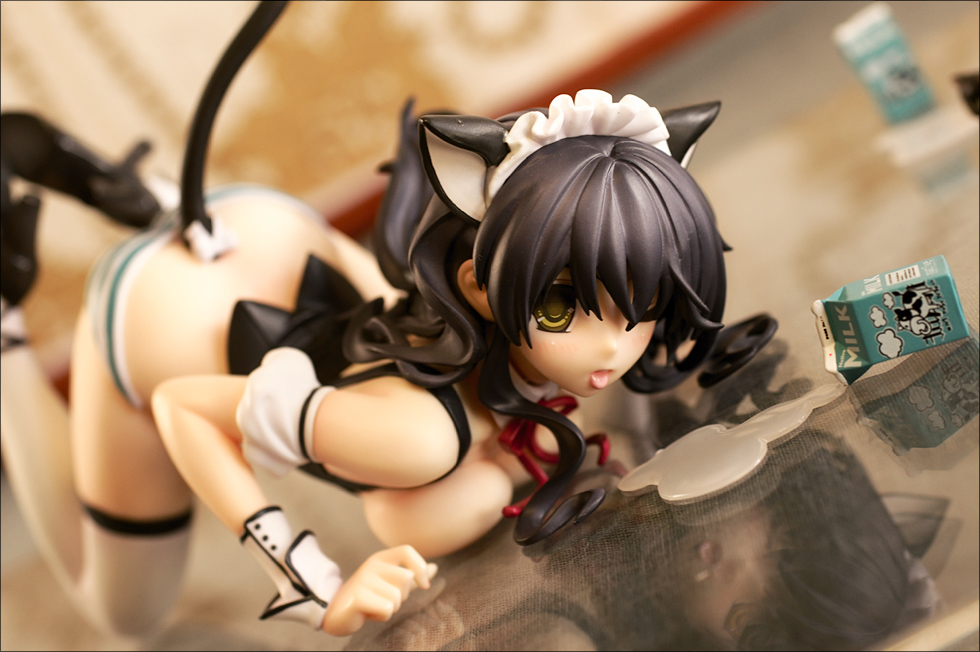 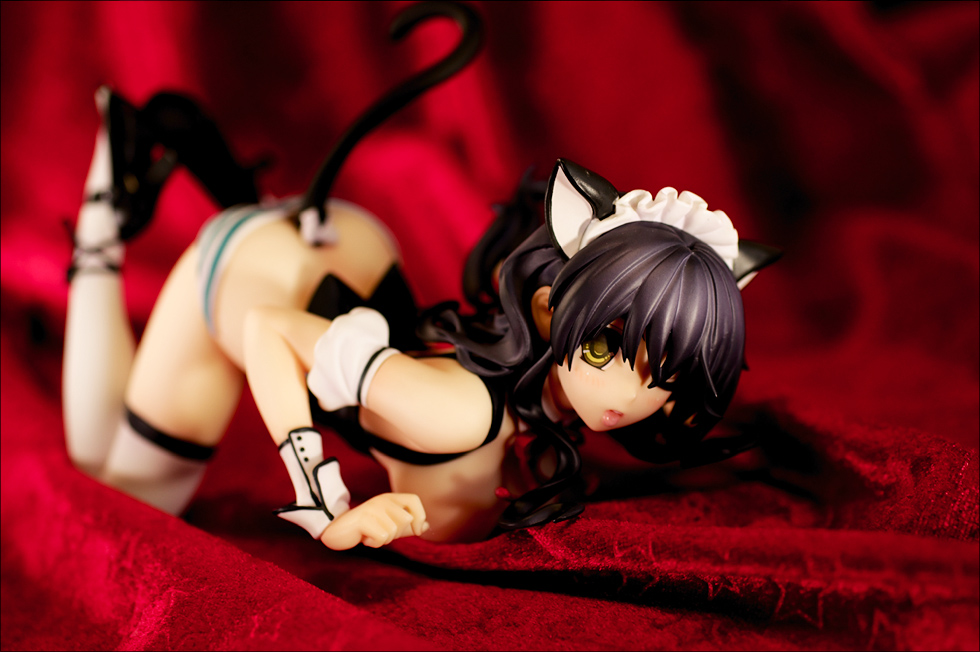 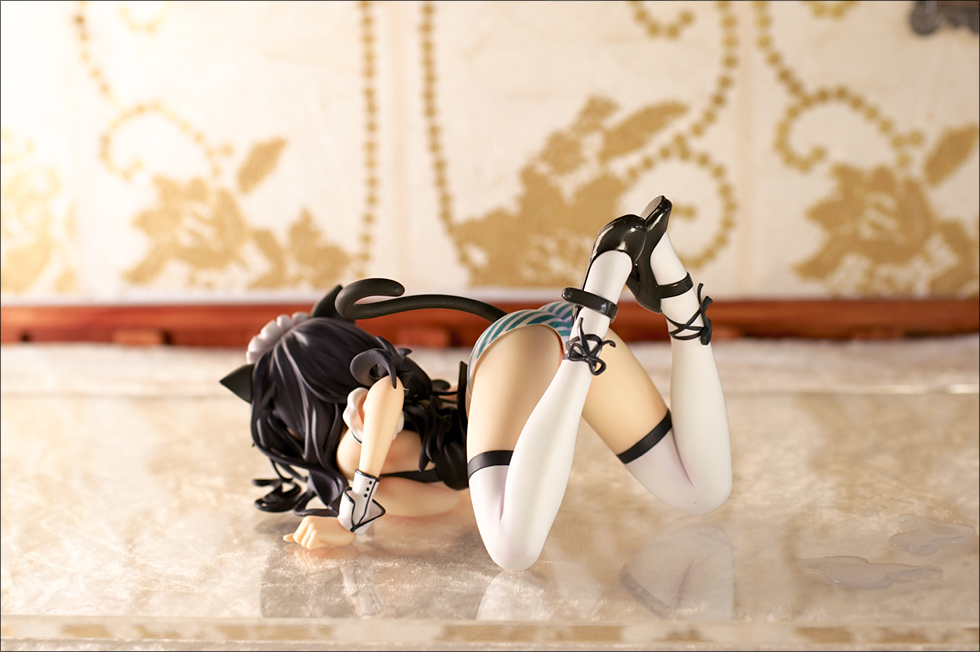 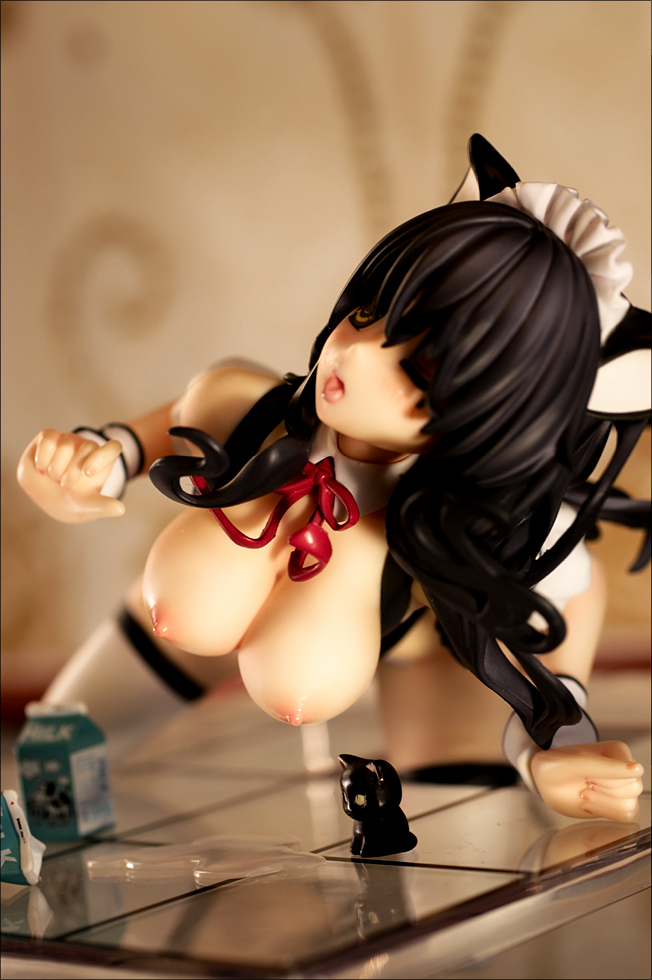 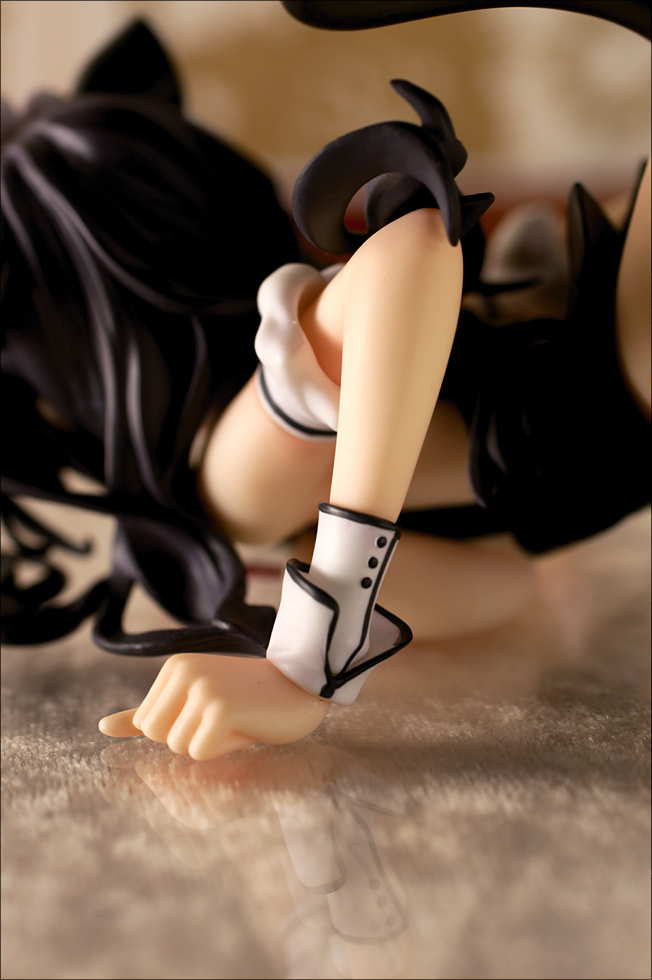 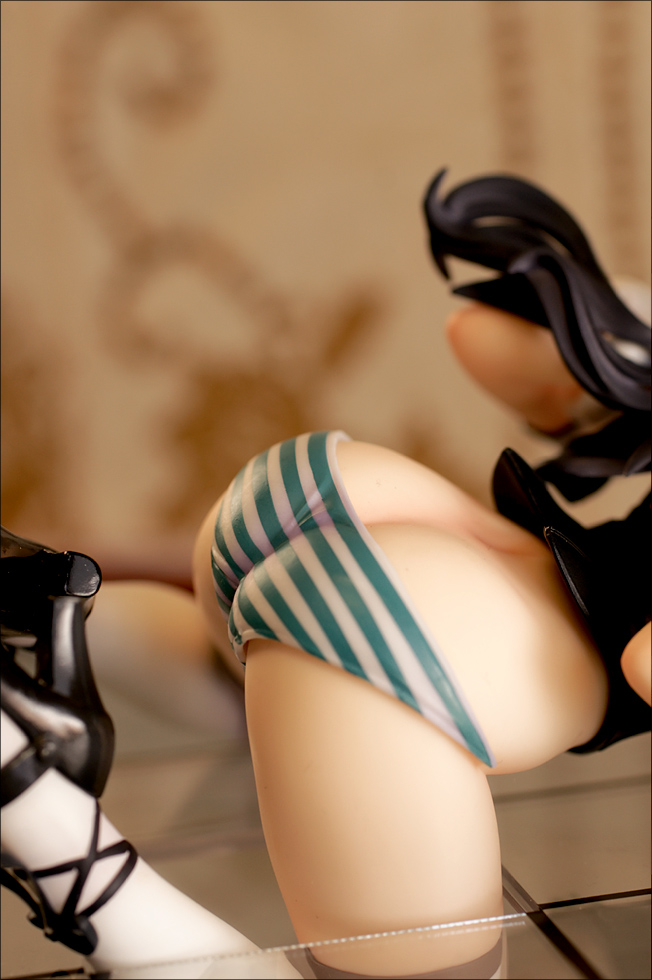 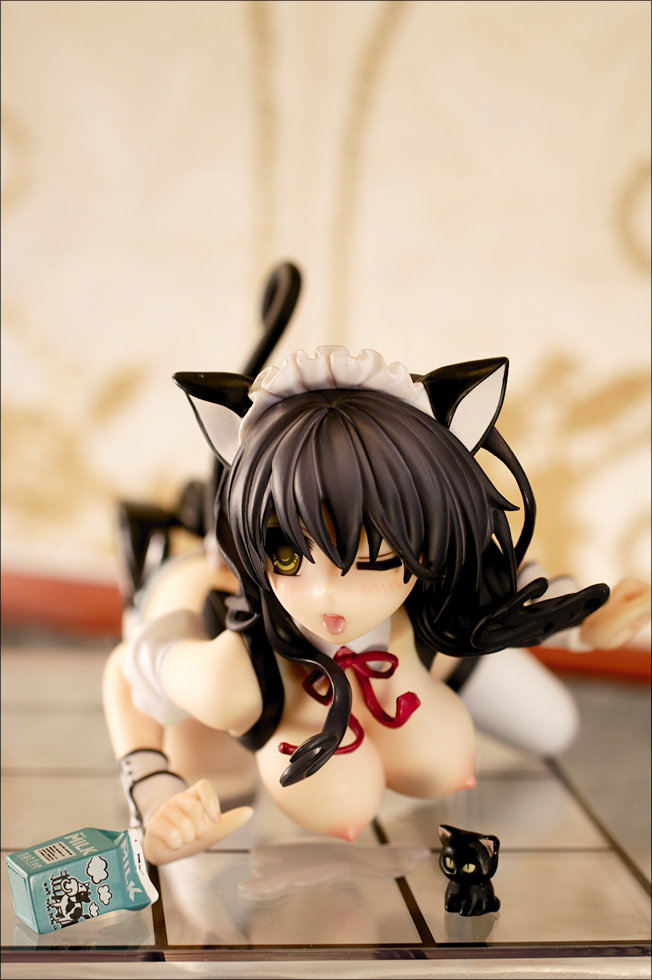 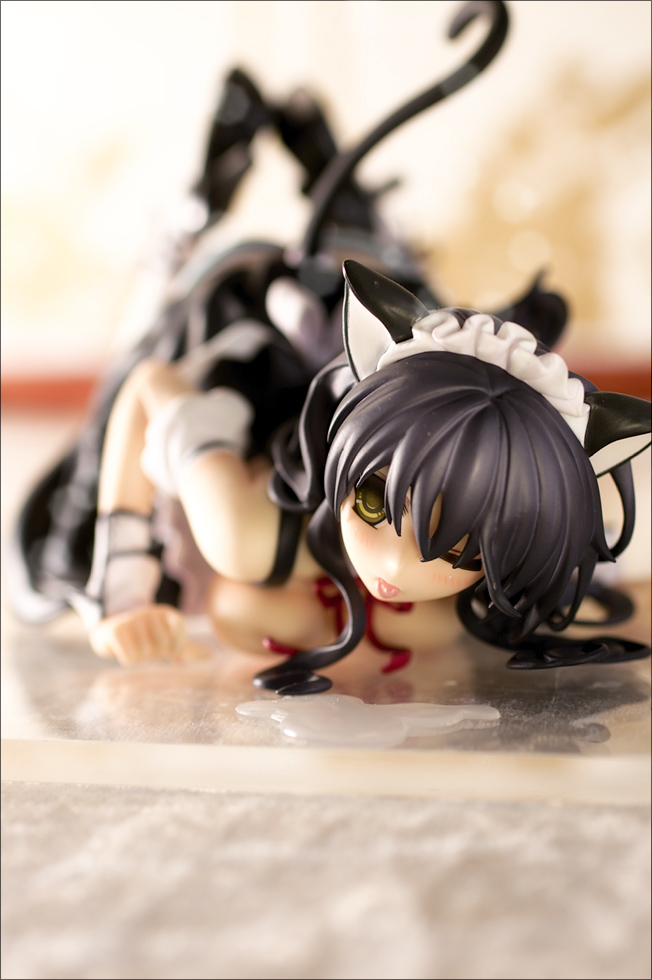