After the crude figure review from last time, this time it will be more vanilla, I guess.

So another figure review, I’ll try to reach the one post per week pattern again, at the moment it is a bit difficult to find the time for taking pictures and writing depends mainly on my mood.
This time Fate Testarossa, the cute, timid loli with a bad childhood is the model of choice. 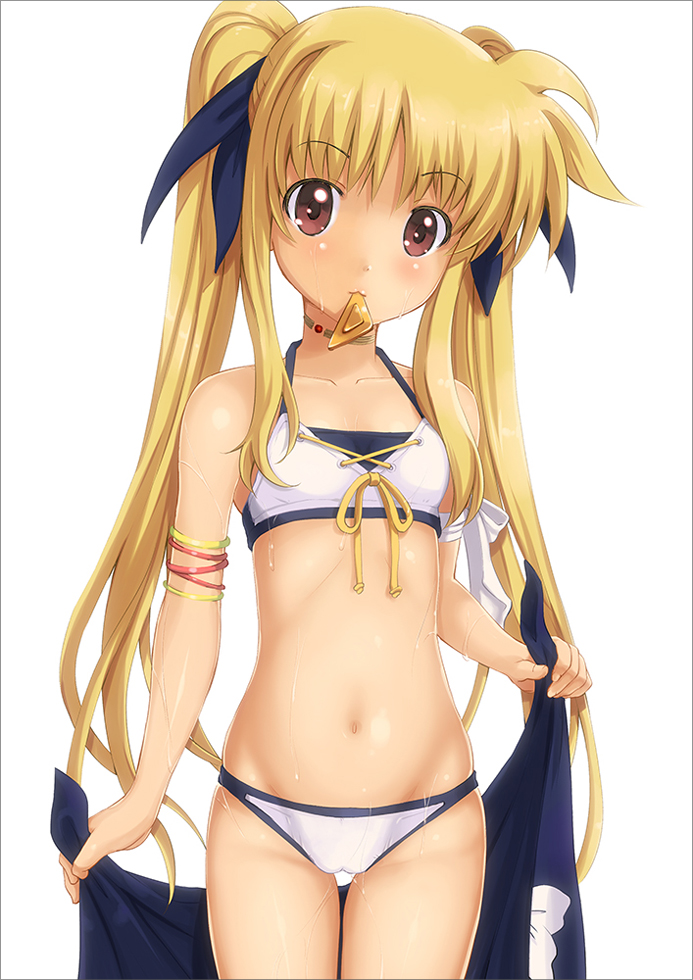 No the figure  isn’t based on the illustration but I found this picture cute and quite fitting to add.

This figure of Fate Testarossa from the Mahou Shoujo Lyrical Nanoha The Movie 1st was manufactured by Gift and released in the end of June in 2013. Fate is scaled 1/4 and has a height of  27 cm. I often mentioned that I like Nanoha Takamachi quite a lot with her enchanting voice and the kind personality. But oh well, it’s always the same story, whenever I have a favorite character I am so picky that I often can’t decide to get a figure of this certain character.

Gift also made a Nanoha figure in Bikini, but I wasn’t that convinced to order her in the end. What convinced me to get the super sized Fate was my general liking for the Mahou Shoujo Lyrical Nanoha anime and a good review from Tier, I found her to be gorgeous and wanted her for myself. 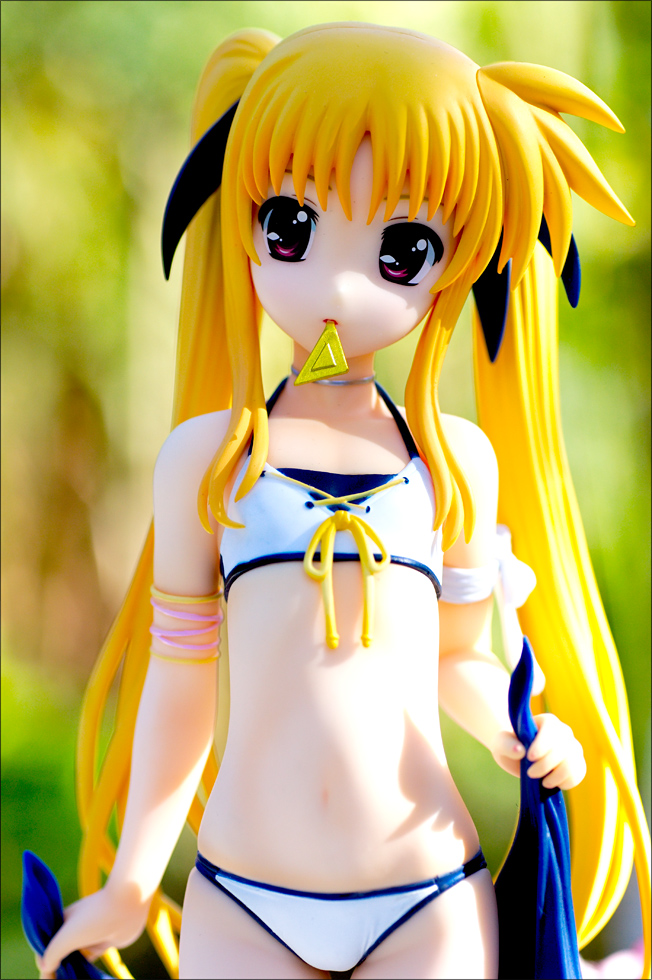 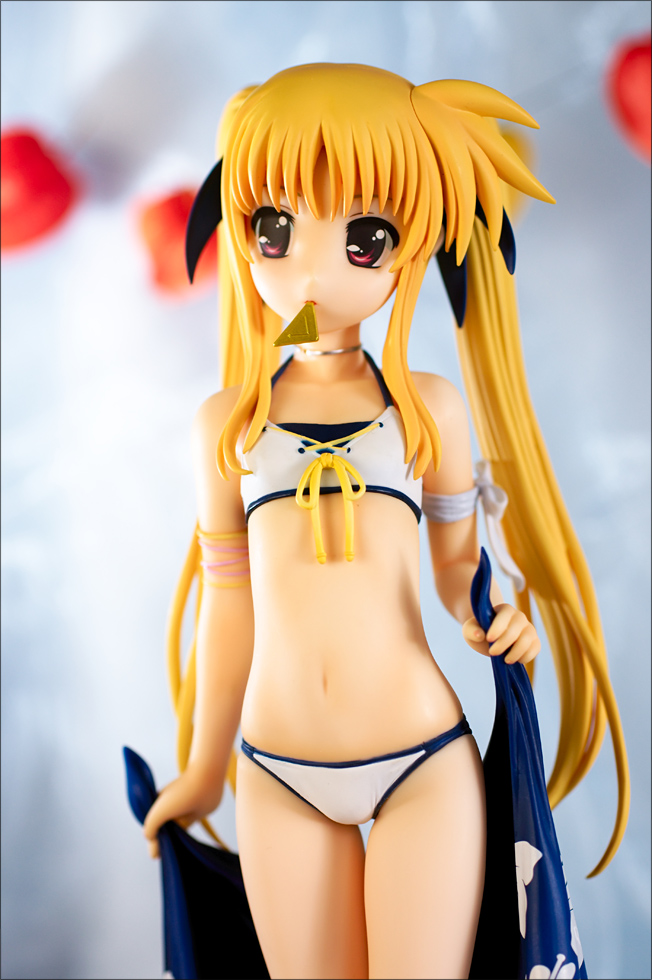 Gift often has a little freedom when creating their figures, they often differ from the original source, sometimes this freedom is not to every bodies liking, but sometimes it’s also for the better.Well Fate is close to her anime appearance and resembles my image of Fate very well.

Fate is presenting herself in a wonderful twin ponytail hairstyle, decorated by dark blue ribbons. Her hair is very long and has a yellow tone with orange shading. The strands have a nice level of detail and are accurately sculpted, I really like the separation at the ends of her ponytails.

What qualifies Fate as a fully fledged loli character is of course her big head in comparison to her body. Even though Gift added no cute blush marks, the face of Fate is very well done, it has a nice shape and this gives Fate a cute expression that fits the characters personality. The figure shows big puppy eyes, a tiny stubs nose and a slightly opened mouth. As little gimmick you can decide to display Fate with her magical device Bardiche in her mouth or without it. 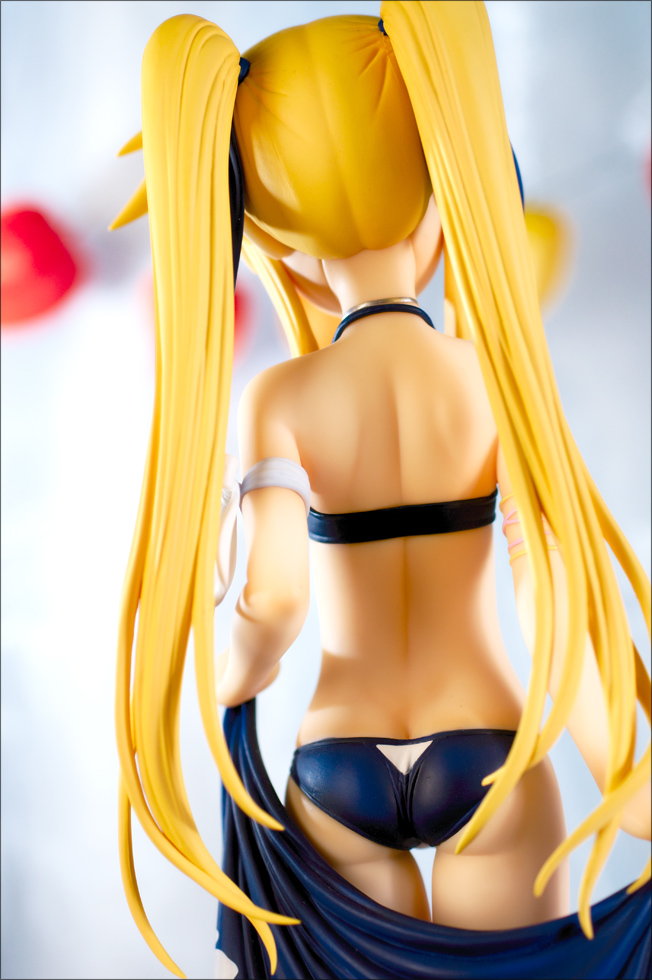 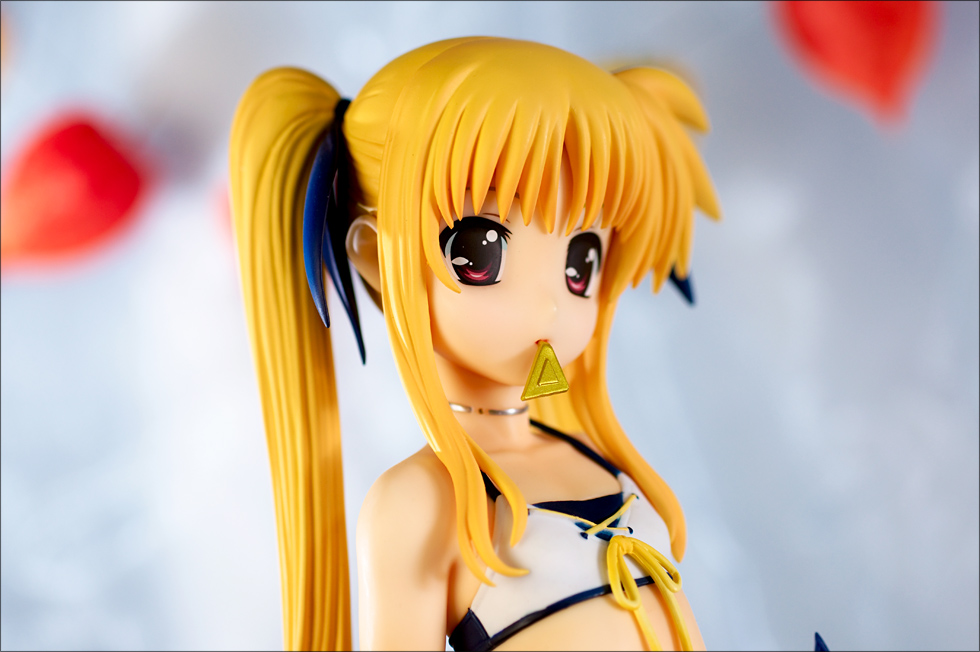 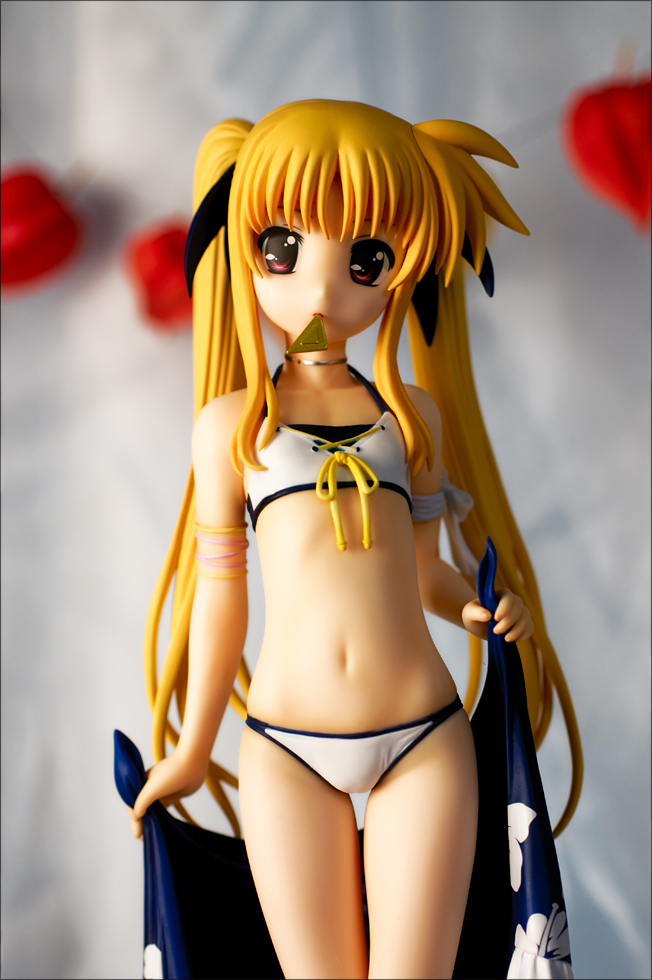 It is no secret that Fate is a rather young girl in Mahou Shoujo Lyrical Nanoha The Movie 1st, but if it weren’t for her big head, Fate could also be a slender, yet older teenager girl. A teenager girl with a flat chest of course. Anyway, Fate’s body looks really good from the front or the back  there are some nice highlights like her detailed back with the scapulars or her lower back. The transition from hips to thighs is also very well done. The legs have a well balanced length, they are not too long and not too short. The sculpting of the whole body is especially smooth. 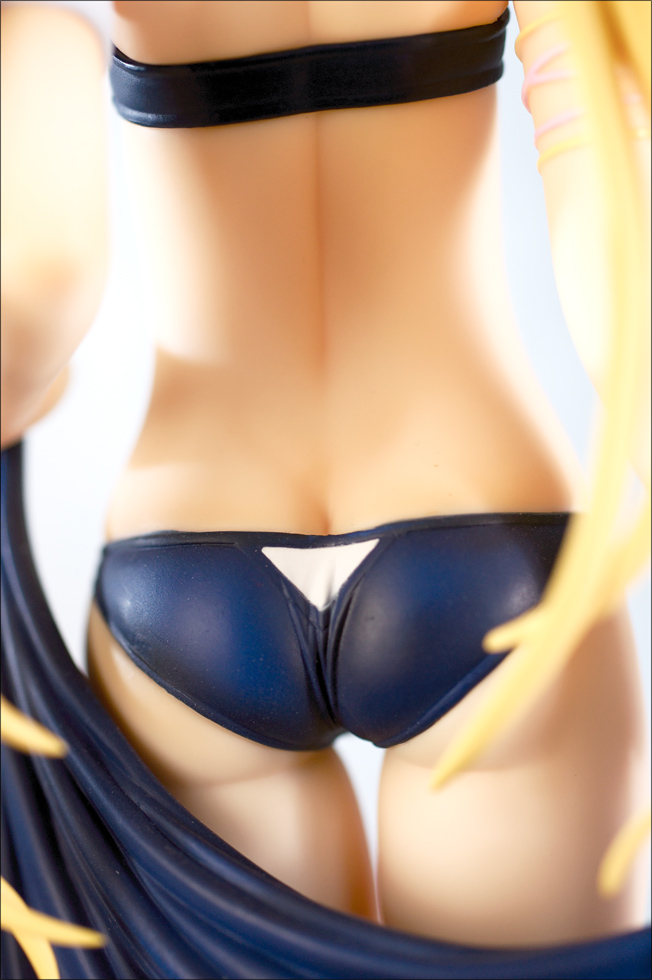 I can’t really remember a scene in the Movie where Fate was wearing a bikini, but that doesn’t really matter. Her outfit consists of a two piece bikini in white at the front and dark blue at back. With the two layers and the laces at the front her top has a cute, sporty design.

The slip is rather tiny and skin revealing, to create the effect of the fabric’s stretchyness there is lighter shading at the part that covers her buttocks. There are some realistic wrinkles at the front and the back, from a lower angle you can notice a detail you wouldn’t expect from a loli figure. To have more  stuff to dress her and to have an additional item, the figure comes with a Parero. It has to be placed with a little force in both hands, but its worth the effort. It goes very well with Fate and has a nice design with wrinkles and a printed on hibiscus pattern.

Smaller details are also part of the figure, there is silver necklace, different colored bands and a white ribbon wrapped around her arms. There is also a tiny footchain and blue beach sandals. 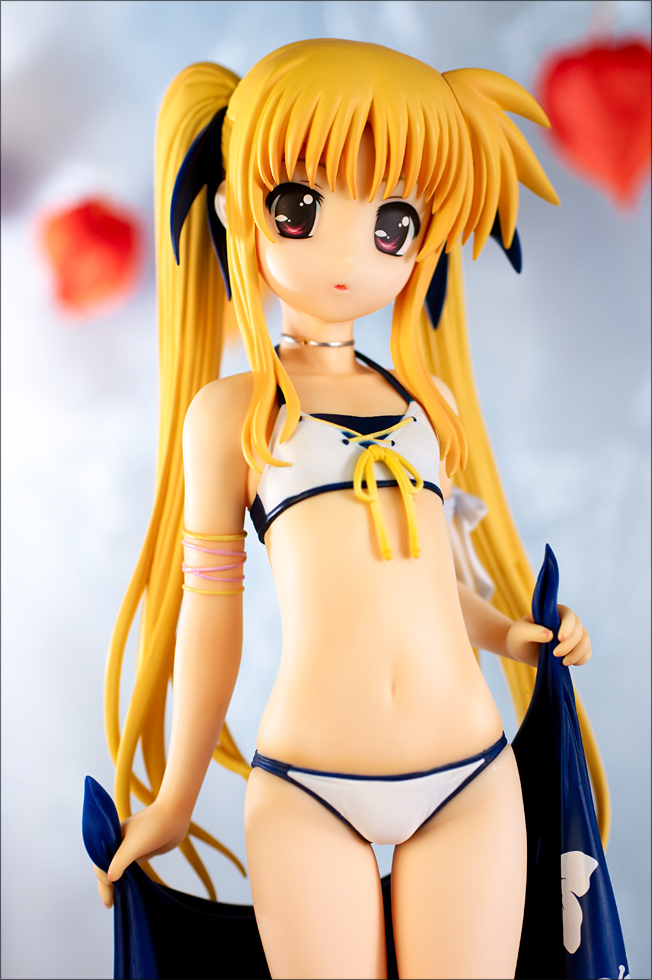 The pose of her is nothing special, but it creates a fitting mood and convincing pose of Fate in a beach like scenario, I’m actually a fan of such simpler, standing straight poses. This is also something I really like about the upcoming Sonico – Package version from Orchid Seed.

It seems like Fate wants to close or eventually open her parero, to have both hands free she put Bardiche in her mouth while walking towards the beach restaurant. I love these smaller details about the pose, like placement of her arms or the nicely tilted head. The base is a simple shiny white disk with a small diameter that connects to her feet, it will win no beauty contest but gives the figure a secure stand without grabbing away much attention from the figure. I never expected to buy an 1/4 scaled figure before since it seems a little too big, but Fate is actually not taller than an adult 1/6 scale figure, only the head is far bigger in comparison.

Large scale figures can actually be very charming, even from a distance you can examine every nice bit of the figure, which is especially true for the face. Fate has such a nice face, I love it. The figure offers an interestingly designed bikini and a fantastic body sculpting. Oh this actually my first figure from Gift, well their quality is very high, there are no unnecessary seam lines or flaws in the hair, also the paintjob is nice and clean. I paid 9670 Yen for Fate and chose registered SAL, worth of 3050 Yen for shipping, nevertheless I’m really happy about the purchase of this figure.

“Come on over Fate chan, Onii chan will build a huge sandcastle with you” ＾▽＾