This will probably be the most unmotivated figure review since this blog started.

This weeks figure review is about Hasegawa Kobato, she’s a character from the lovely anime adaption Boku wa Tomodachi ga Sukunai. Kobato is the little sister of Kodaka, the main character, both live alone since they decided to stay in town when their father moved away.

The figure was made by Kotobukiya and released in October 2013, the figure is scaled 1/8.

Kobato is obsessed wih a certain vampire anime and copies the behaviour of the main heroine very accurately and dresses like a goth loli. One would actually think a girl like her would have no friends or be bullied, but as we learned in the second season, her classmates adore her.

In this illustration of Buriki, Kobato lookds quite adorable and I was happy that this was adapted as figure. The figure sold like hot cake and the shops played the sold out – in stock game, Actually, it was not easy to catch one for people who didn’t order early, the first day. 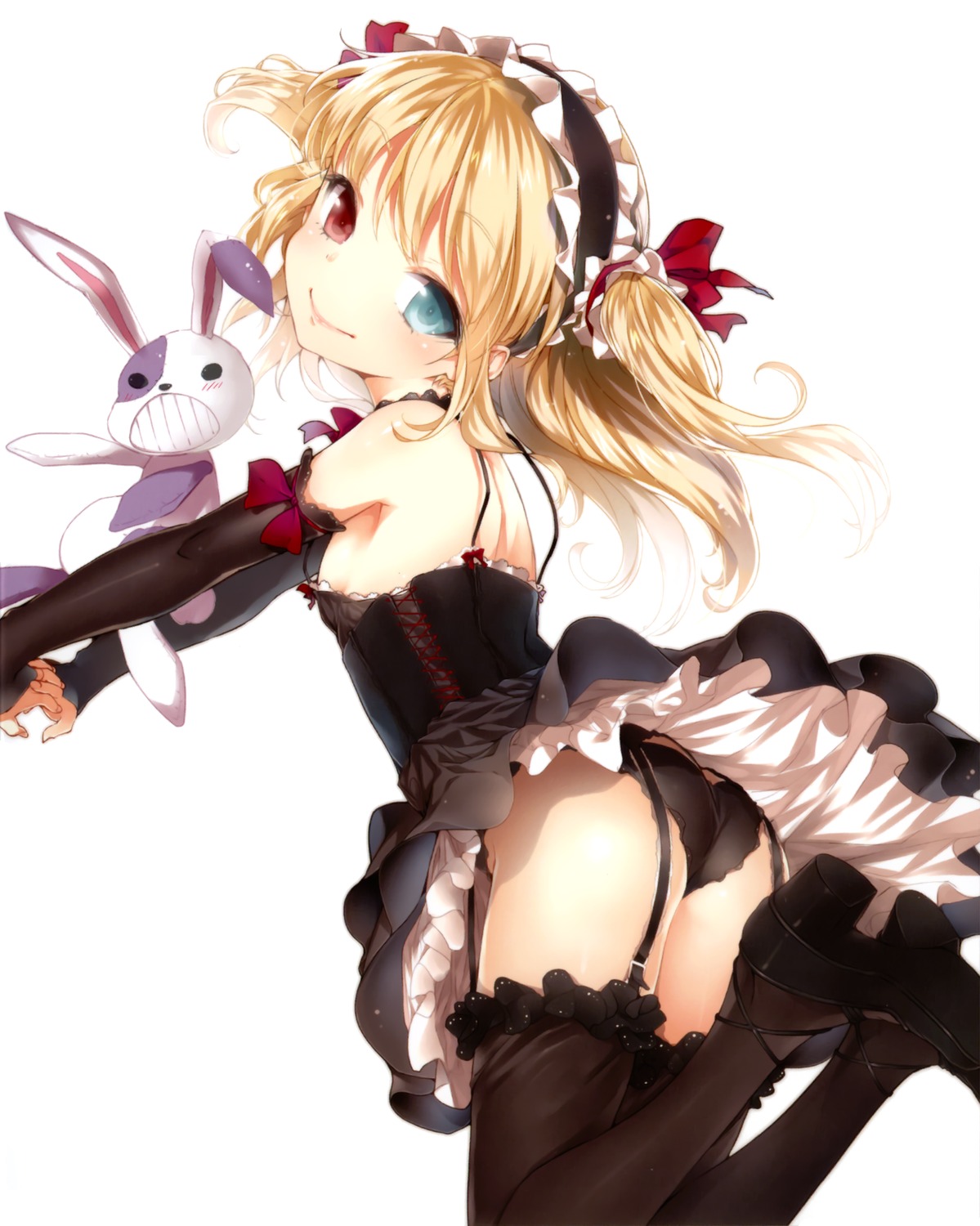 Speaking of that I actually ordered the Boku wa Tomodachi ga Sukunai artbook, but the shop messed up and never acquired a copy for me (╯︵╰,). 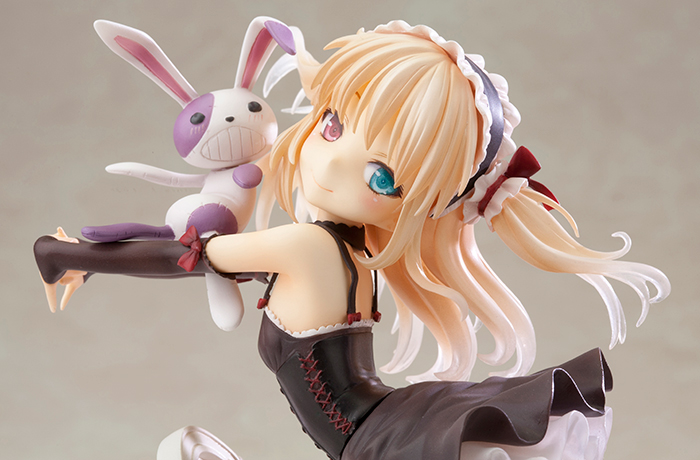 In the promo pictures the figure had nice opaque, pale skin, instead the final figure shows the skintexture of a marzipan pig, it’s the kind of PVC Griffon or Ques q often uses. What doesn’t appear like a big deal, annoys me so much, I can’t help myself, it just makes me angry. I don’t know which idiot decided to change the material for the final product, Why! Why! I could always count on Kotobukiya for appealing skintones, at least but for some reason not this time.

I’m already too biased to write a review like usual, I change my usual review pattern this time.

The figure resembles her character from the anime quite well, although she doesn’t seem too smile that often in the show, when her brother pays too much attention to other girls.

Kobato has a cute face, the heterochromia eyes are nicely detailed, there is also a little blush on her cheeks and the friendly smile is really charming. The hair shows a  very bright blonde color, there is a fading transparency effect incooperated what I actually like, the strands are sculpted surprisingly good. 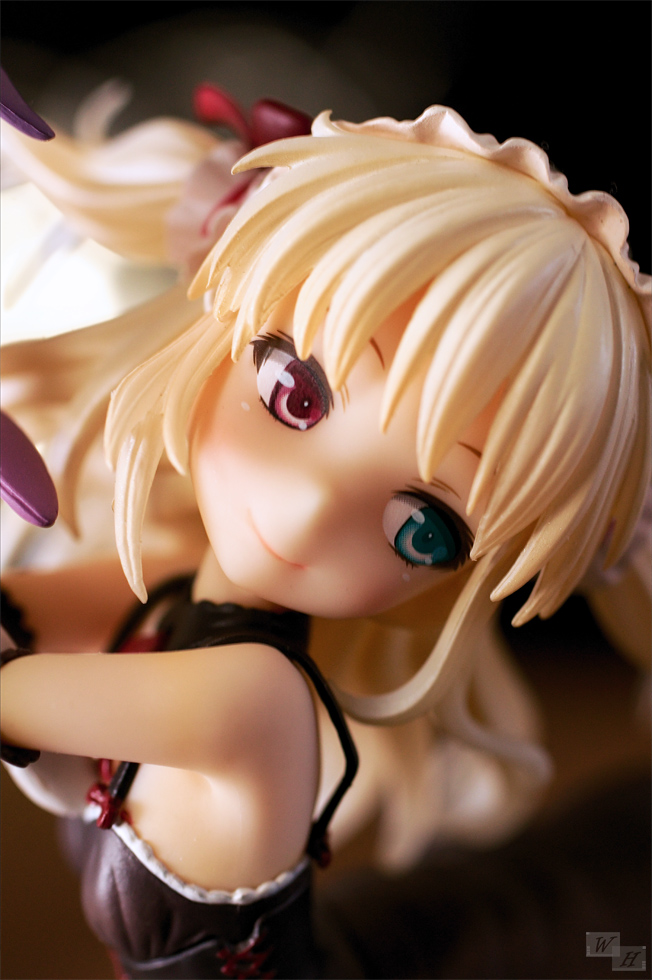 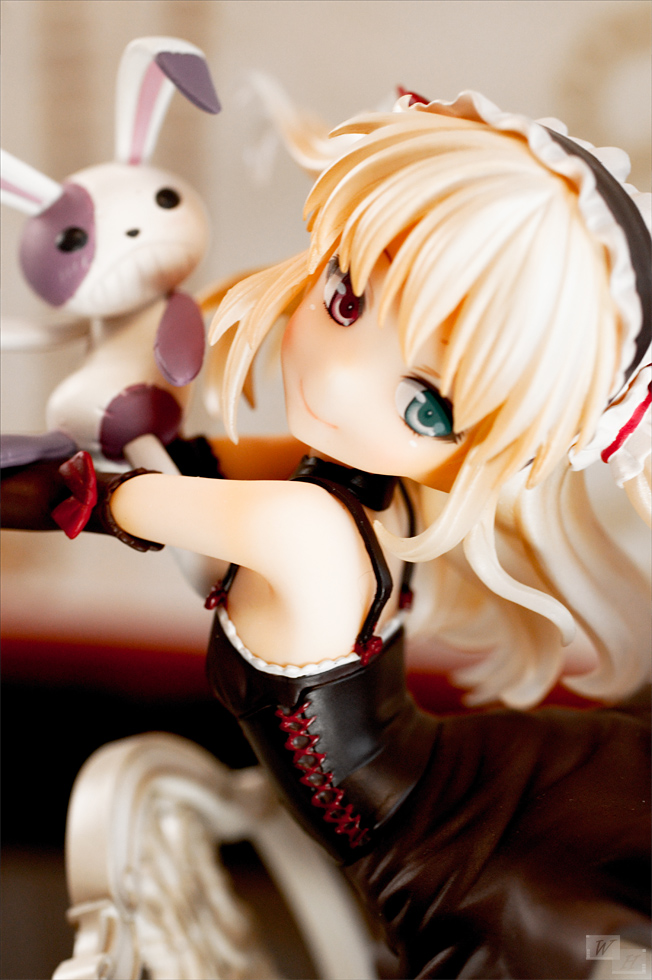 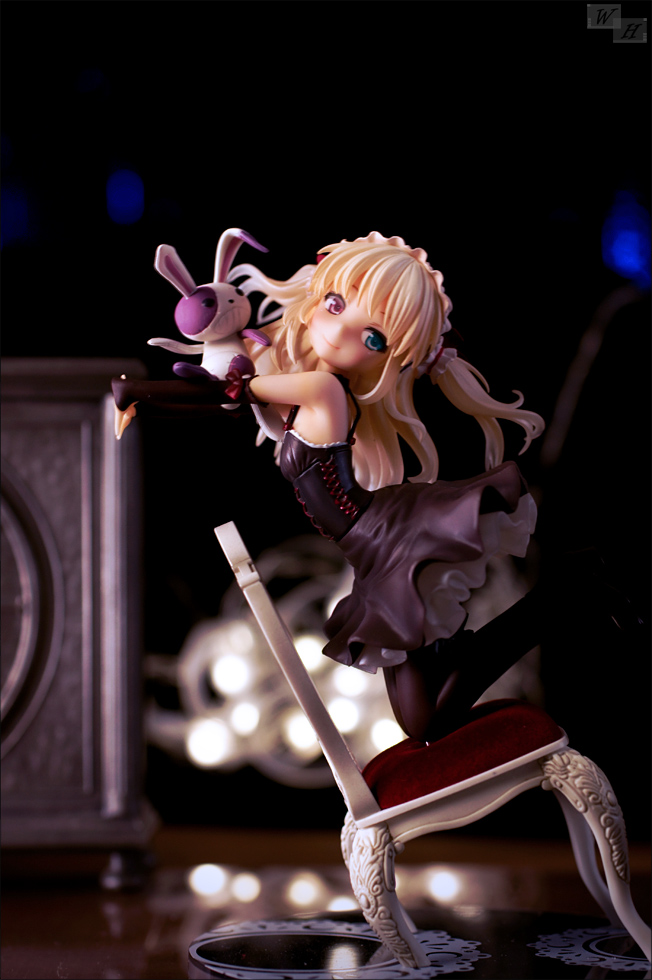 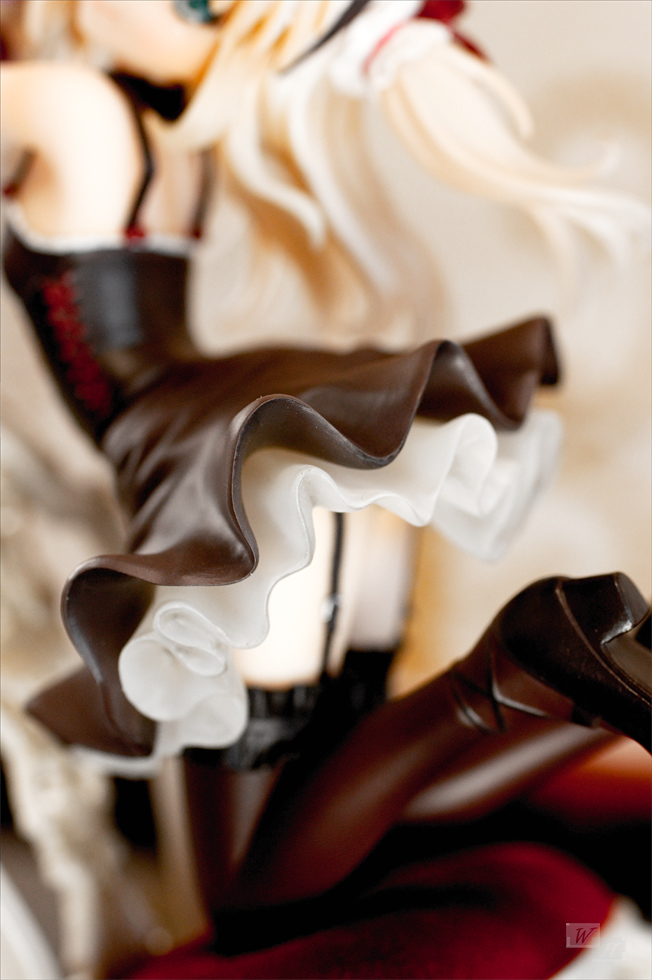 The dress is looks good and appealing, fingerless gloves, a corsage top with white rims, a number of blood red ribbons and lovely hair decoration. Kobato also is wearing stockings, a garterbelt and black panties. Partially the details on it could be a bit finer, when you look at the ruffles of her skirt, they appear slightly thick compared to rest of the dress.

See, the figure is not bad overall, you get your little, goth loli with nice hair and a pretty dress. 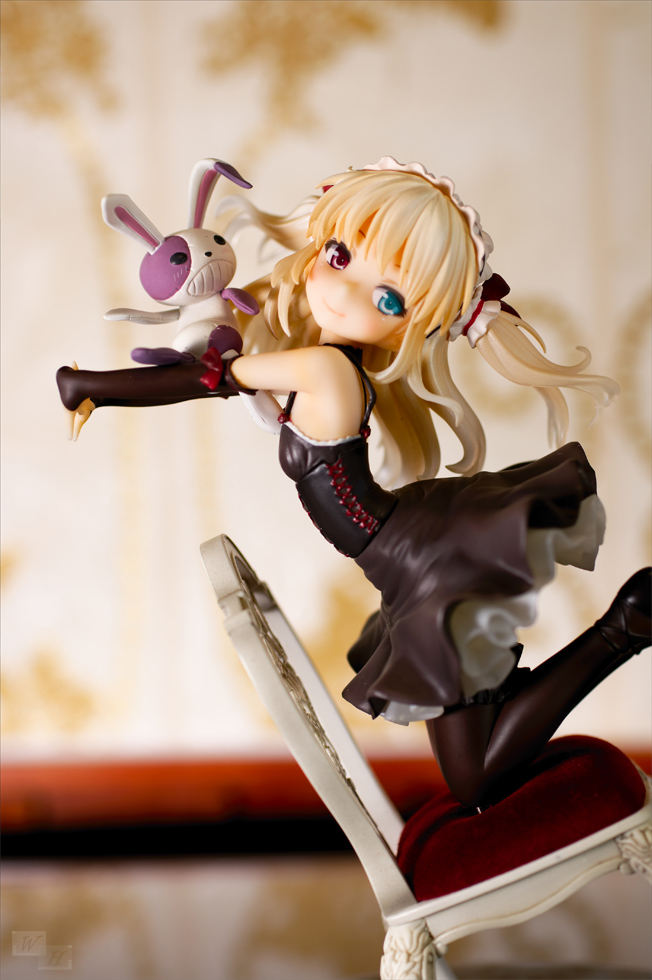 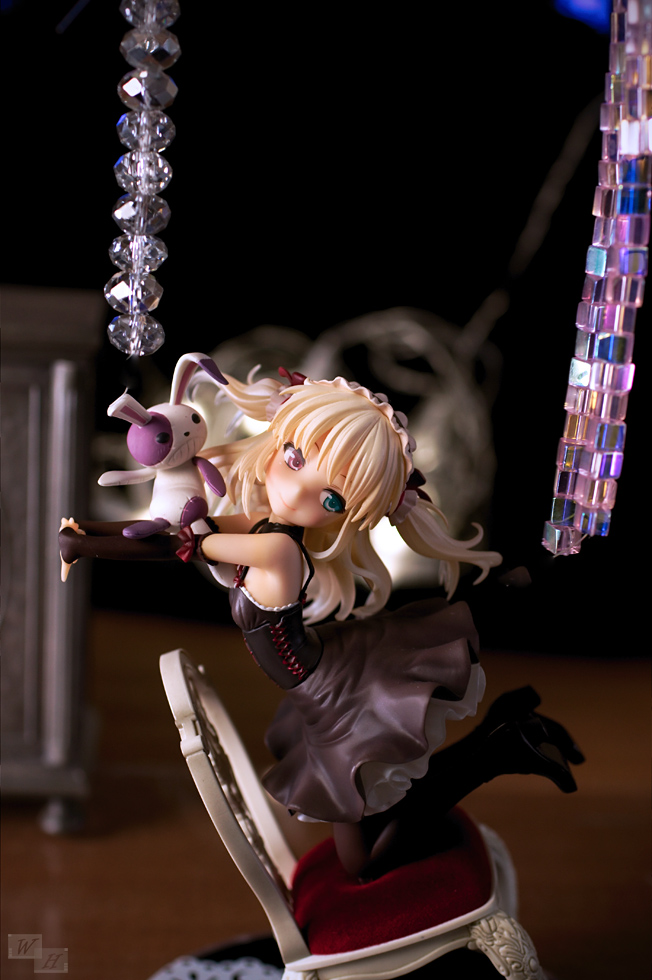 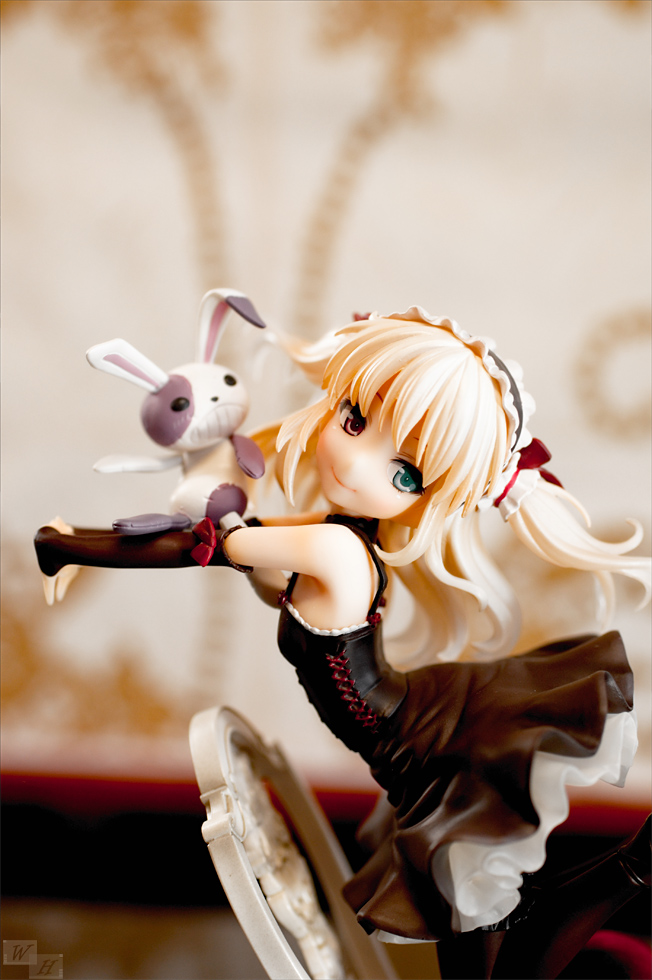 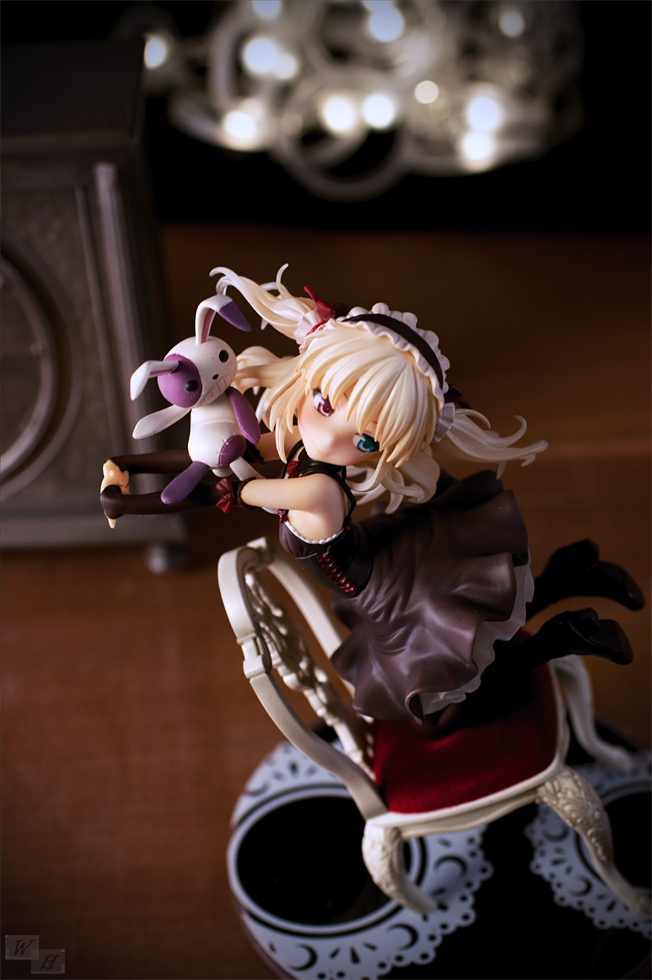 The pose actually looks like falling off the chair with a big smile, but to whatever Kobato is up to it looks cute. She has a shiny black base in oval shape with some white ornaments printed on.

On the base is a cream white chair, in an antique, Victorian design, the red velvet seating is a quite nice detail of it. The  legs behind are halfway sunk in the base, it would be cool to have a full chair though. You connect Kobato and the chair via metal rods that slide in the holes of her knees. You can’t really use the chair with other figures, well it’s glued to the base anyway. 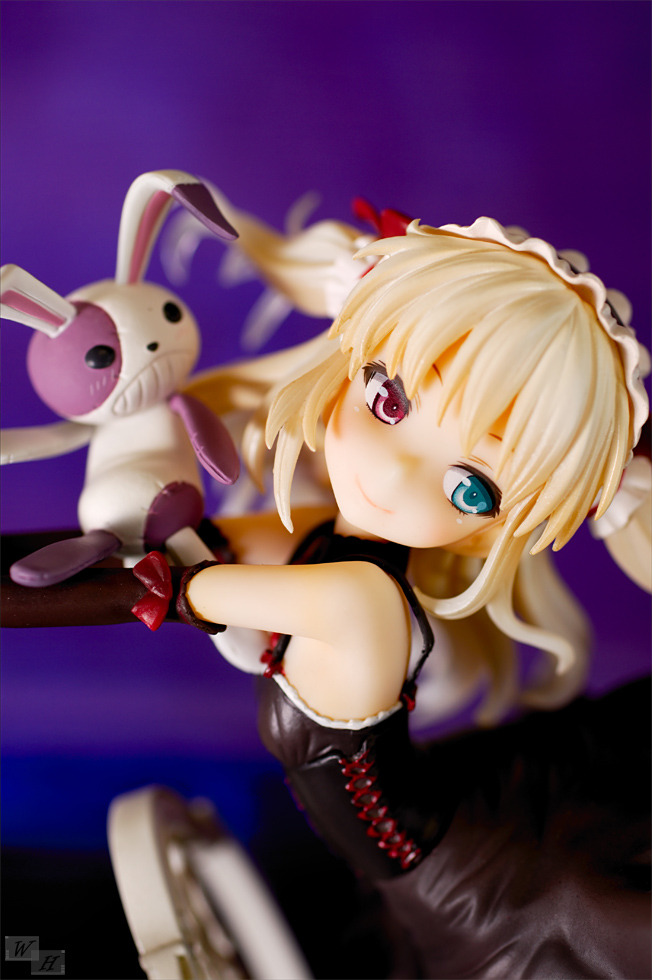 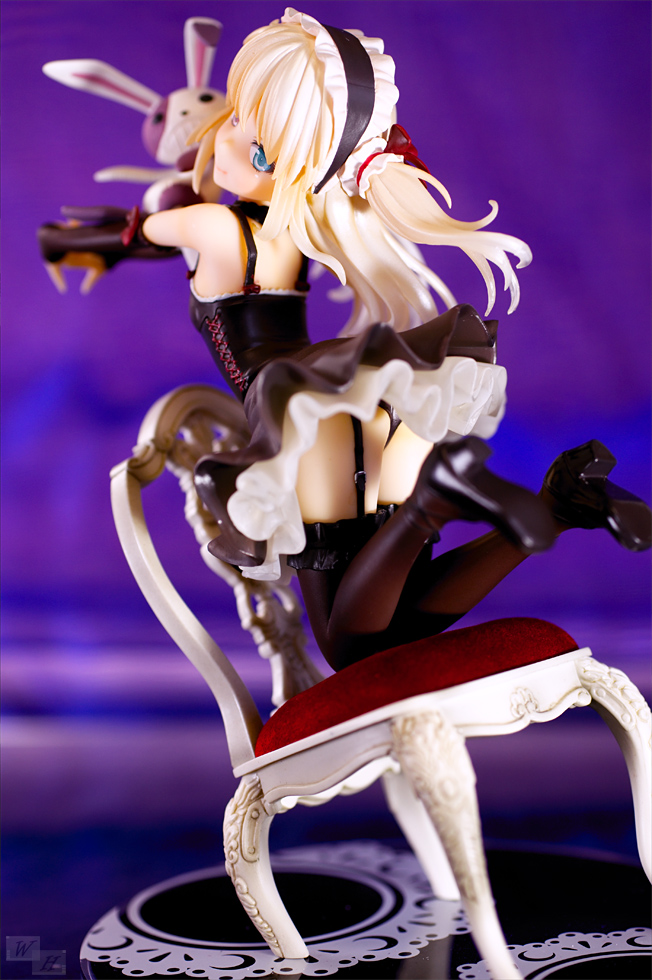 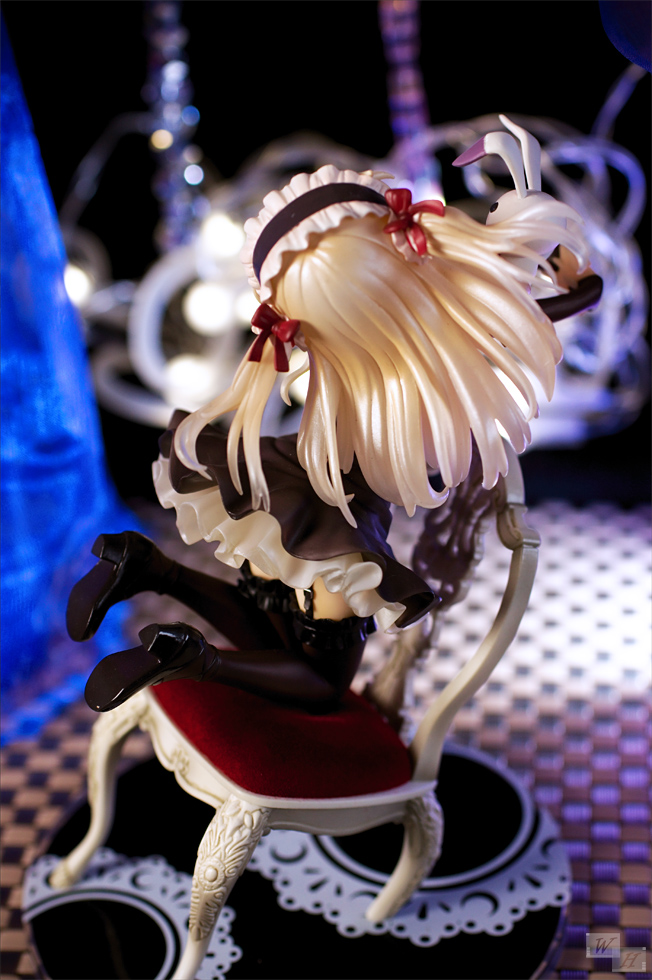 Of course Hasegawa Kobato is no bad figure, she has a pretty face, nice hair and a pretty goth loli dress. The details are nice and the paint is applied cleanly, it shows the actually good quality of this figure. Why I’m that dissapointed is hard to tell, I guess I had too high expectations after Max Factory’s wonderful Kobato and Maria figures and the fact that the skin tone turned out a lot different from the promo pictures, didn’t help either. So Kobato is no figure for me.

What is your opinion about this figure? 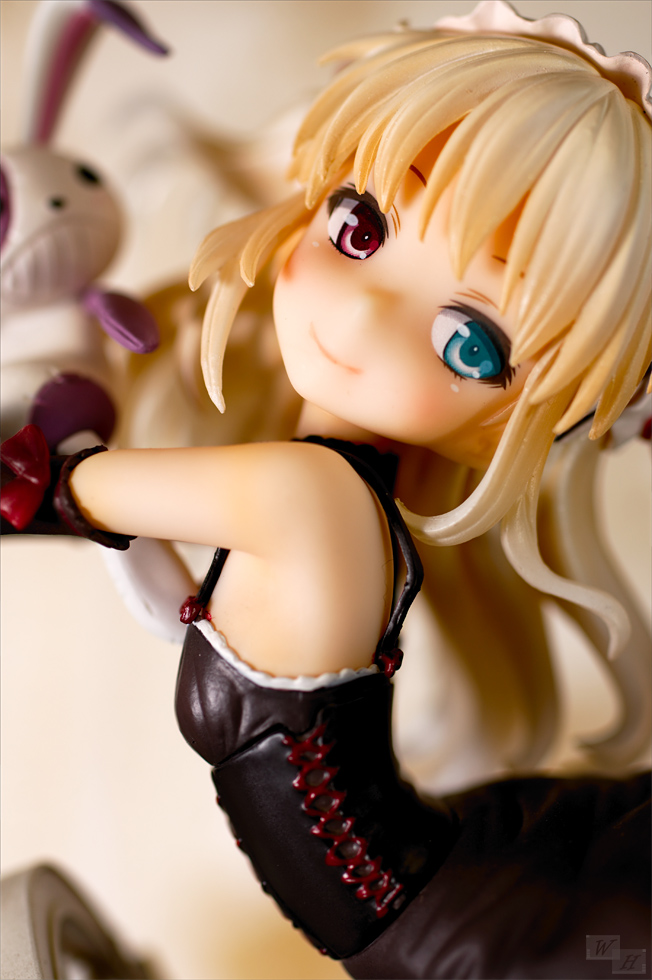 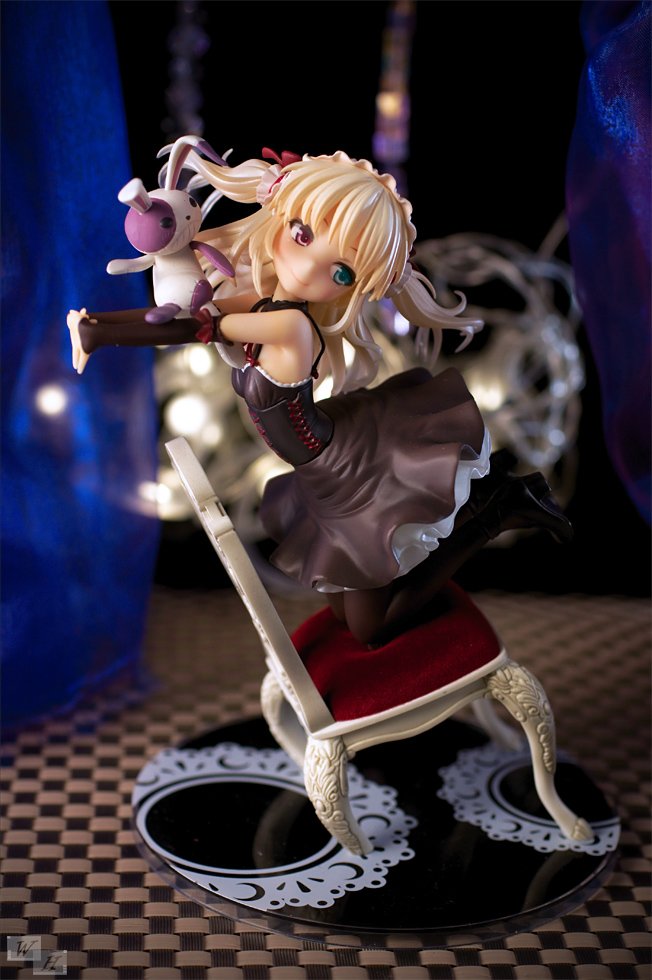 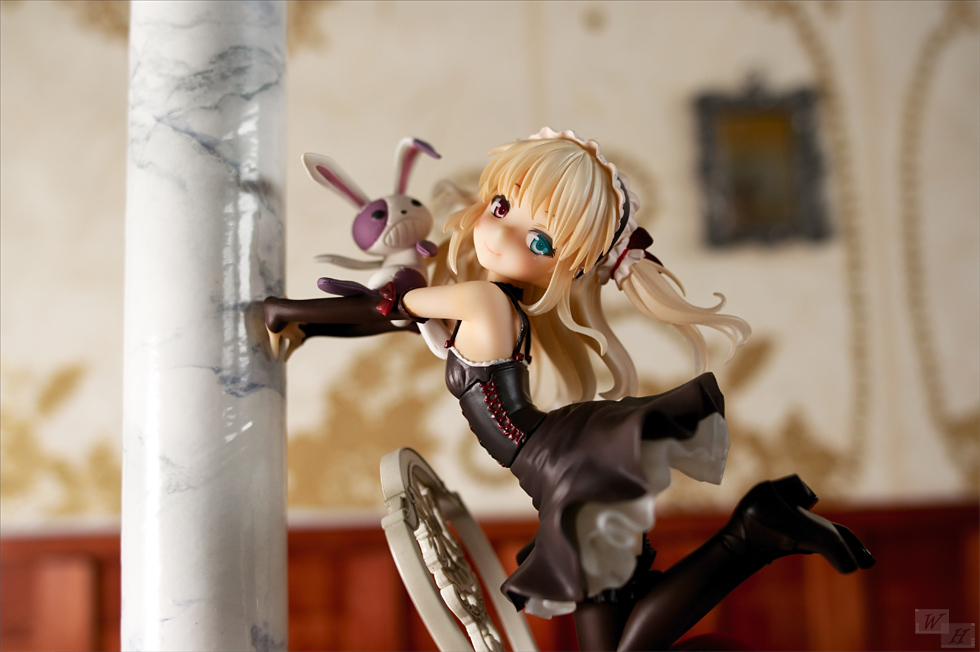 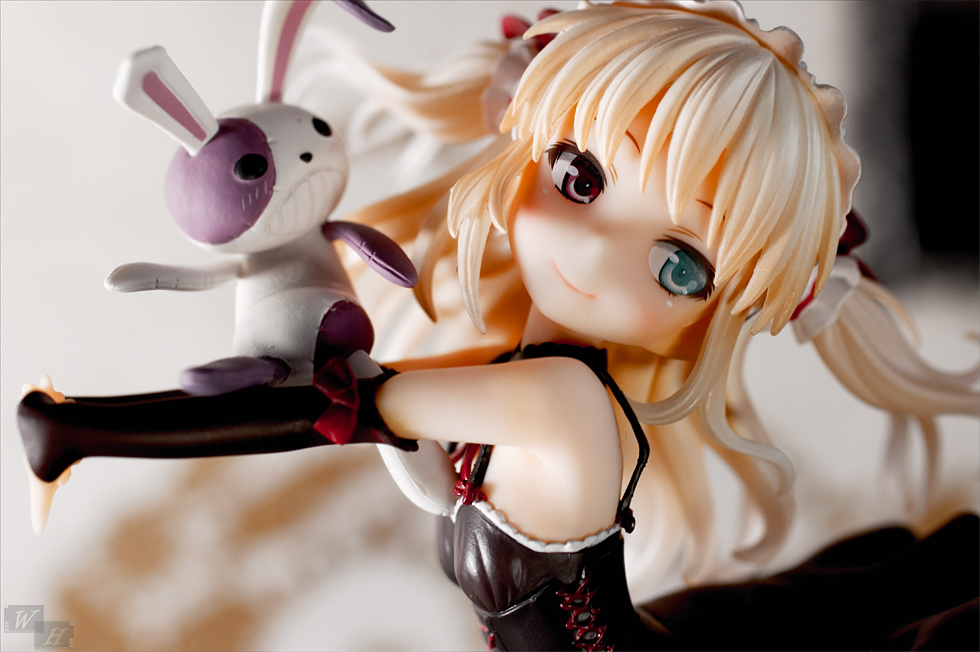 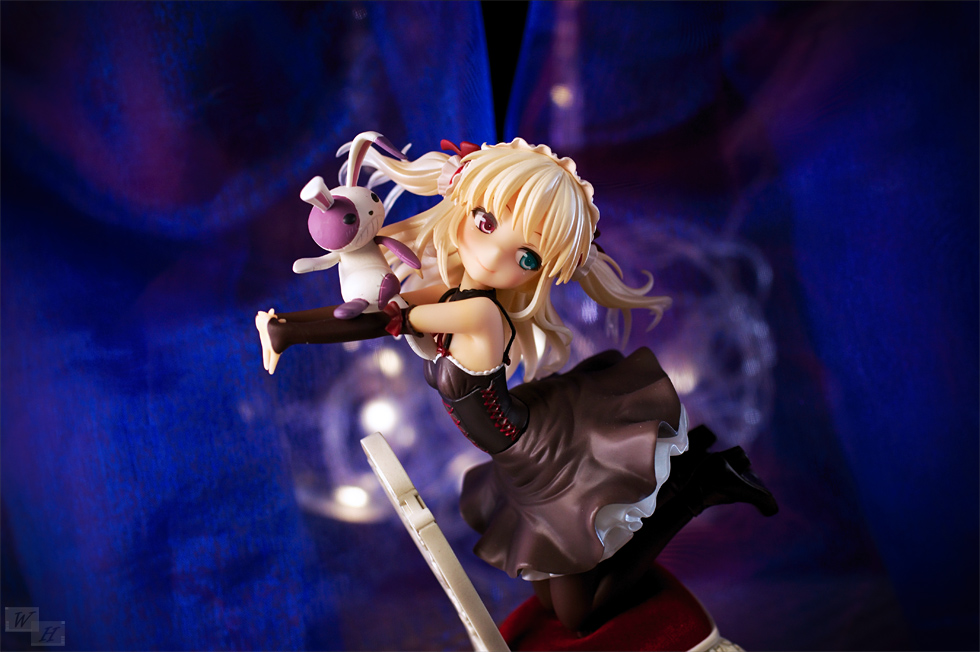 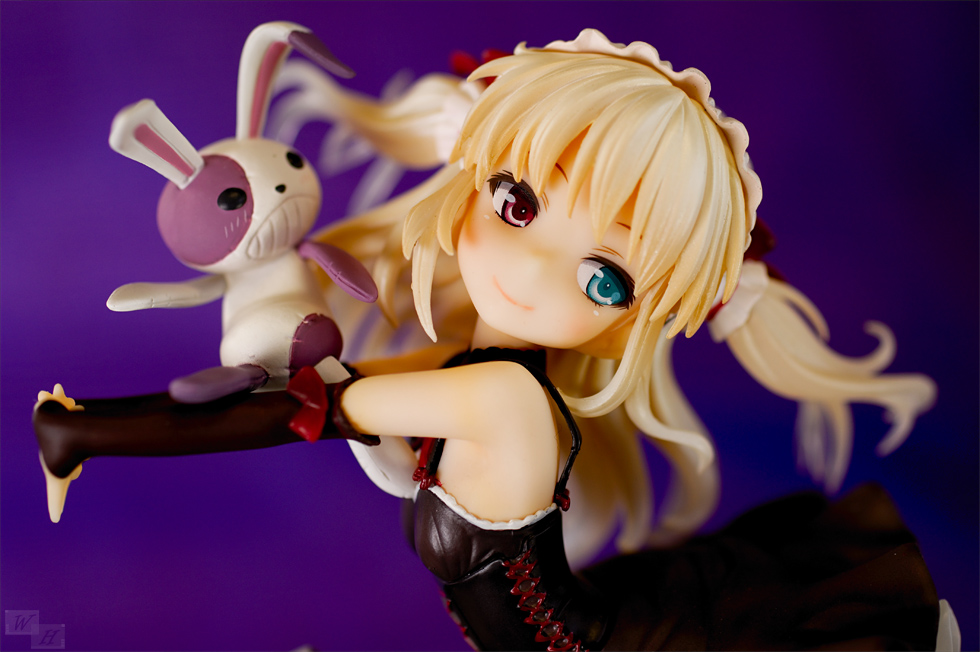