Another Senran Kagura figure is ready for review, my pace is horrible, listen to my advice, never order more than two figures a month. Katsuragi is the second one, after I was already positively surprised by Hibari, I also wanted to get the next one. Phat Company continues
with the adaption of Senran Kagura figures from the Ringo Renmei garage kit circle.

Katsuragi was released in the end of September 2013. The figure is scaled 1/8 and has a height of 20 cm, the person in charge of sculpting was Amasu who also created Hibari for Phat Company. 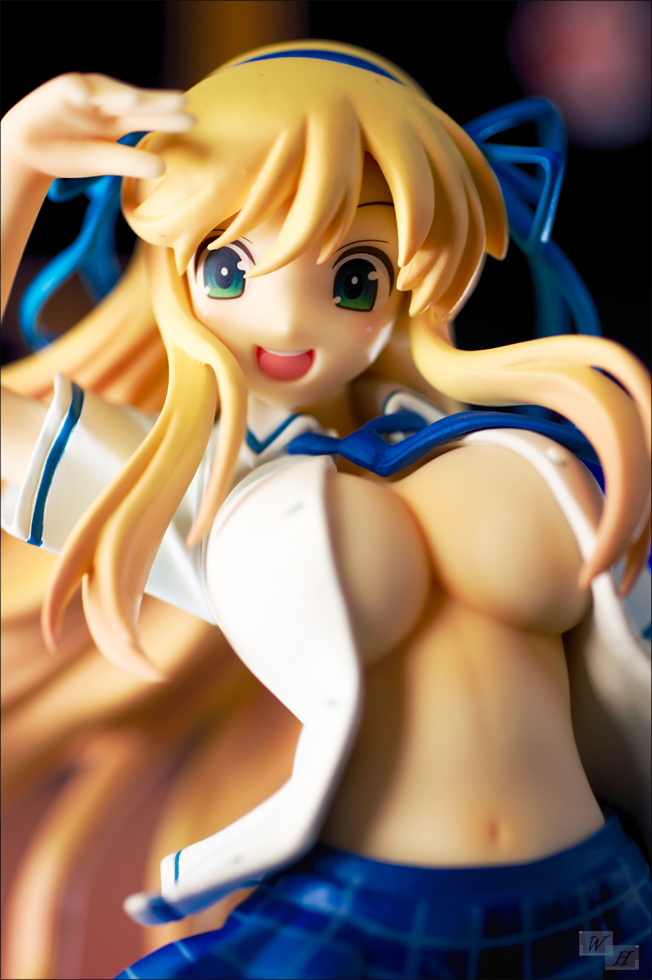 The anime was based on the Game/Manga and already aired, I reviewed it some time ago here. While not perfect, but very entertaining it created a boost in terms of  announced Senran Kagura figures and other merchandise. A distinctive feature of Senran Kagura is the buxom characterdesign with a healthy amount of cuddly curves on most of the characters bodies. 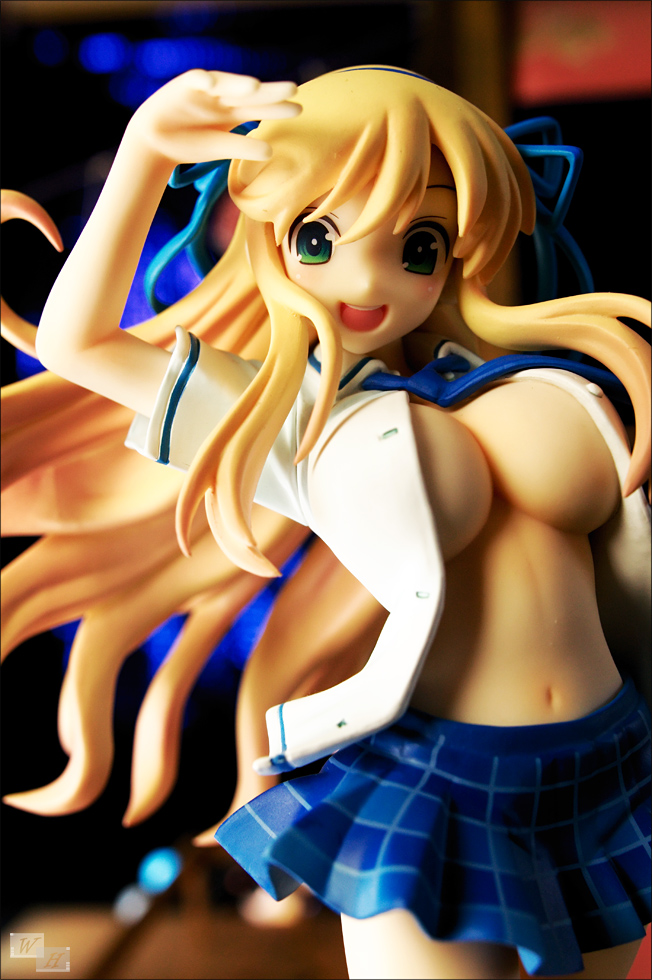 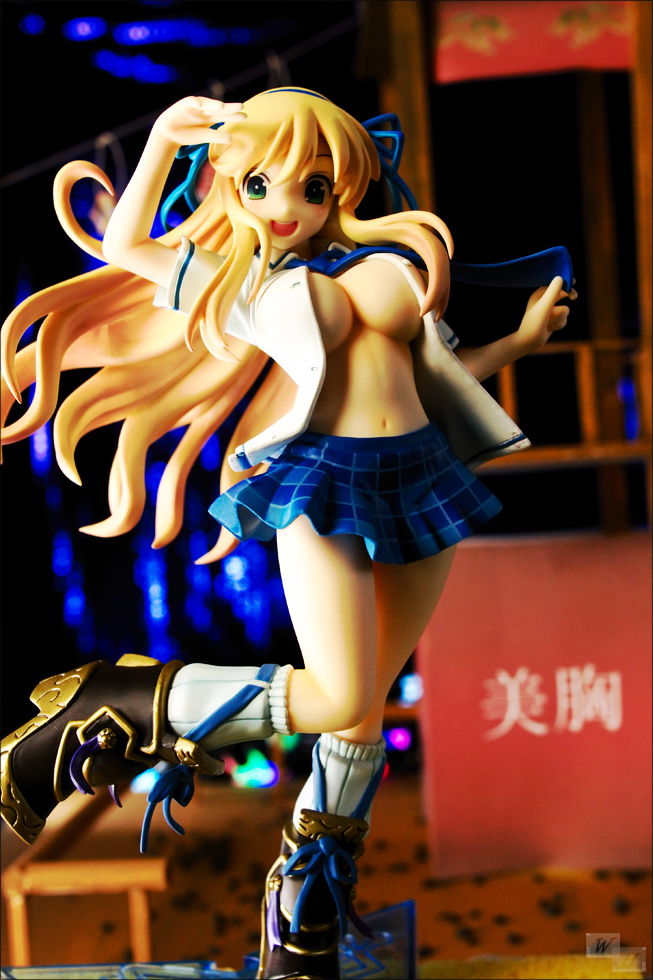 Katsuragi is a third year student of the National Hanzo Academy, together with her friends Asuka, Hibari, Yagyuu and Ikagura, she  takes part in the secret Ninja classes. Katsu nee is a rather perverted member of the girls, she loves to harass Asuka and sometimes Ikagura by fondling their breast for her own pleasure, contrarily she doesn’t feel comfortable when being touched by others. She doesn’t mean any harm by this and is quite attached to her friends. 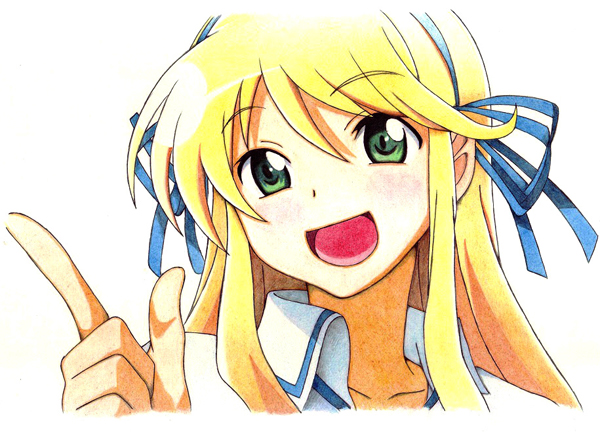 She is a tough fighter and always searches new challenges and stronger opponents. Although she easily to provoke and a rather hot headed character, which sometimes backfires at her. Katsu nee is specialized in kicks therefore her armored boots are actually her weapons. 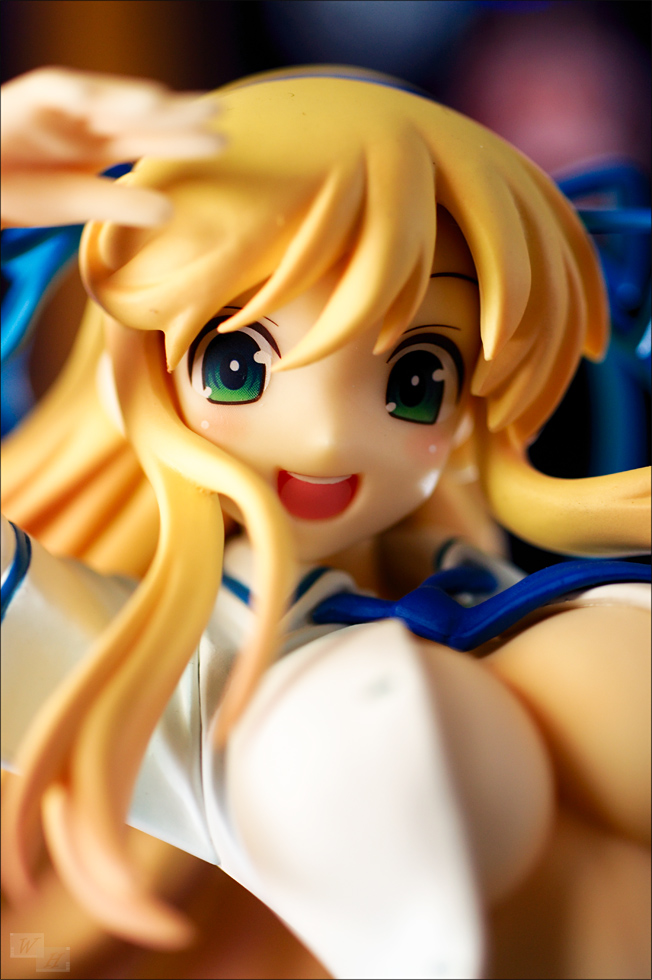 Even when Katsuragi is a little wild and bold girl, her hairstyle is rather feminine with long blonde hair and huge blue ribbons. The hair looks quite elaborate with all these strands coming out, they are shaped very smooth with rounded edges, so far I’ve noticed no rough areas. The whole backpart appears to be made of one solid piece, the often unpreventable middle seam is hidden by the blue ribbon. The color shows a nice gradient from pastel blonde to caramel brown.

It’s hard to believe that someone with such an adorable sweet face has a pervy part in her personality. Anyway Katsuragi is very cute with her face that is radiating a very happy atmosphere. She has detailed green eyes with lovely blushmarks underneath, her open mouth features an upper front teeth line, something I find very appealing on figures. 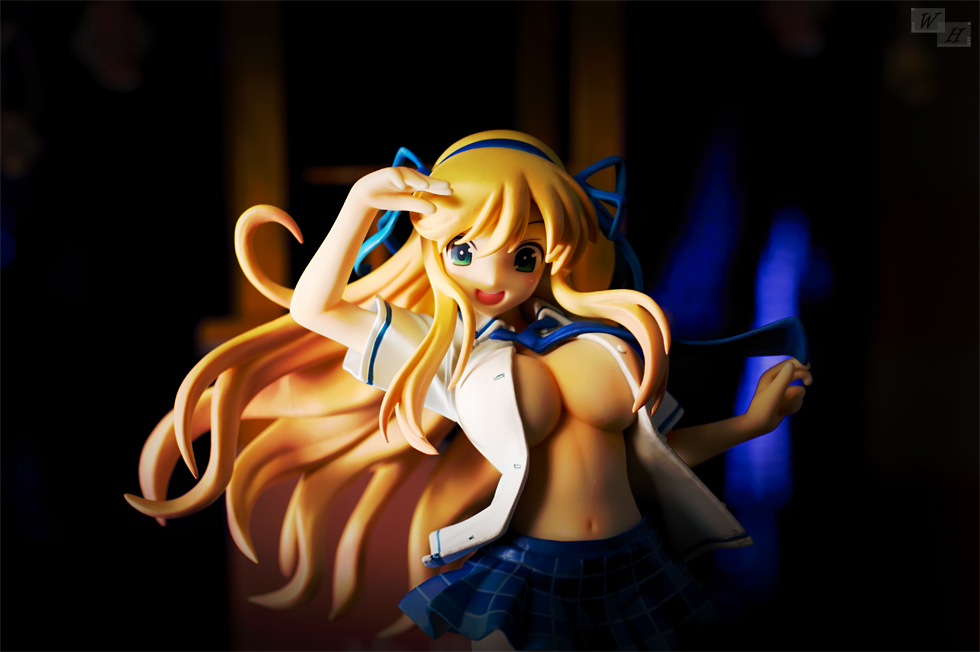 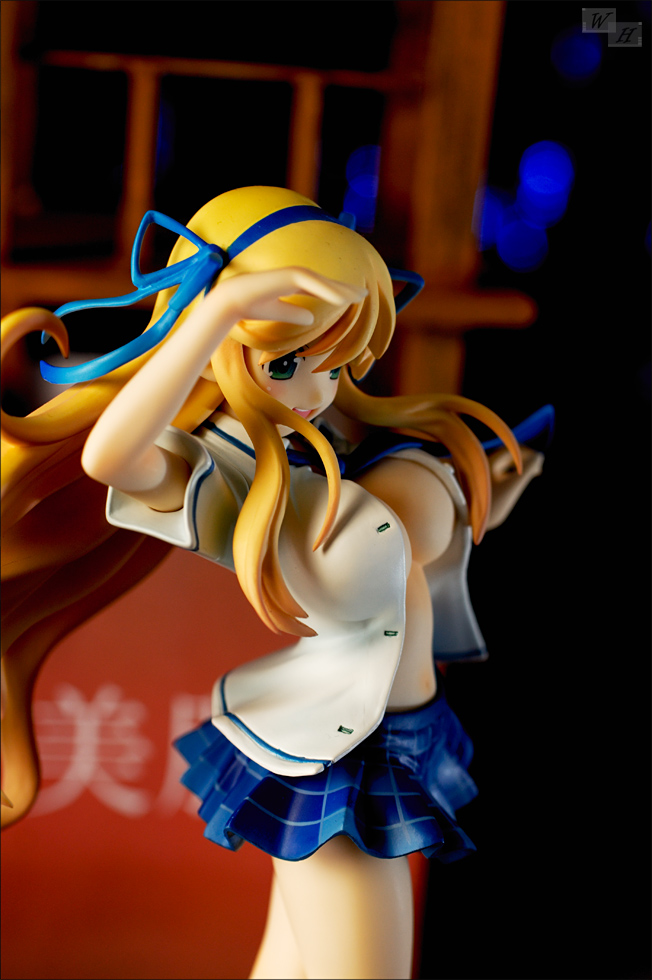 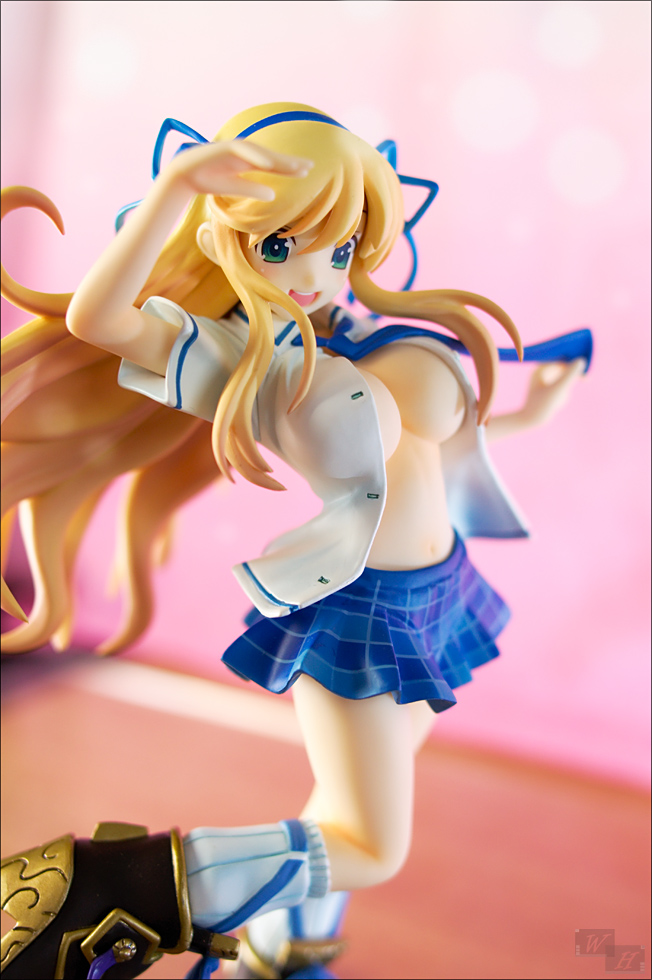 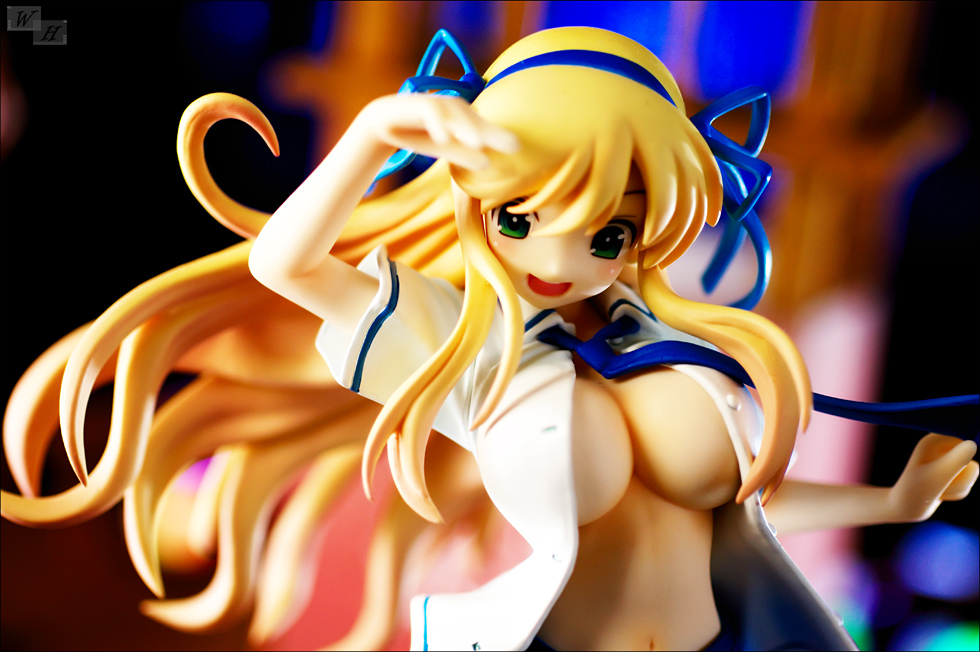 Posed in a very cheerful and energetic way and pushing out her impressive bust give Katsuragi an interesting and playful appearance. The open shirt reveals most of her upper body from the chest to her belly button, but don’t expect it to be castoffable. What also meets the eye nicely shaped legs with smooth thighs. The skintone is nice and there is some shading here and there.

Katsuragi is not so bold to wear her school uniform like this everyday, it is her official “Shinobu Transformation” outtfit. Well, it’s not much different from her summer uniform. She is wearing her unbuttoned shirt in a bra less fashion, she also has a lovely blue minirock with an interesting square pattern printed on. She has striped panties, which are purposely hidden by her flowing skirt. As footwear she has loose socks and heavy boots resembling samurai armor. 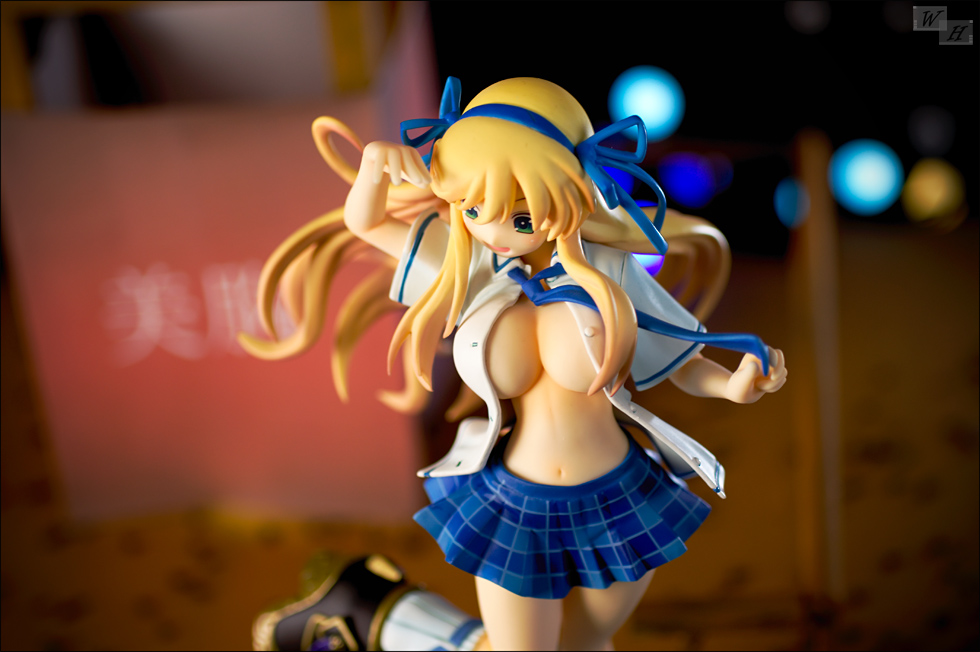 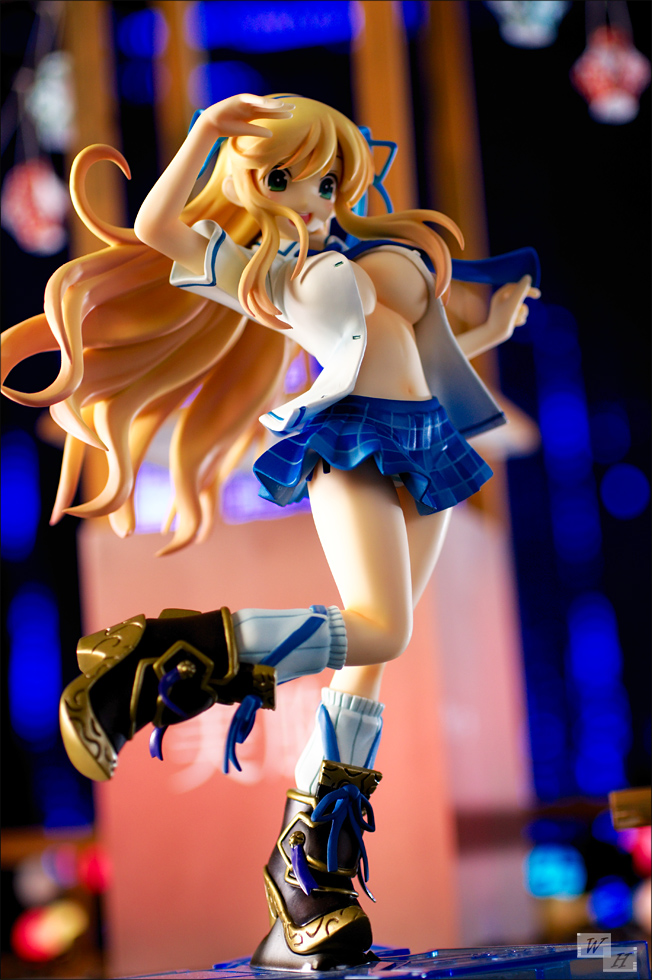 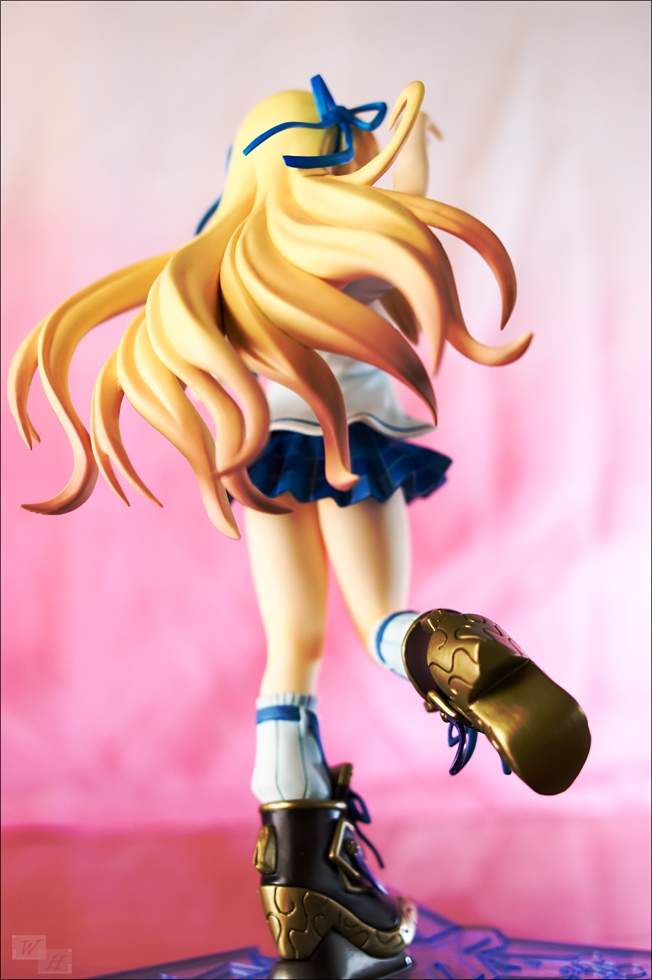 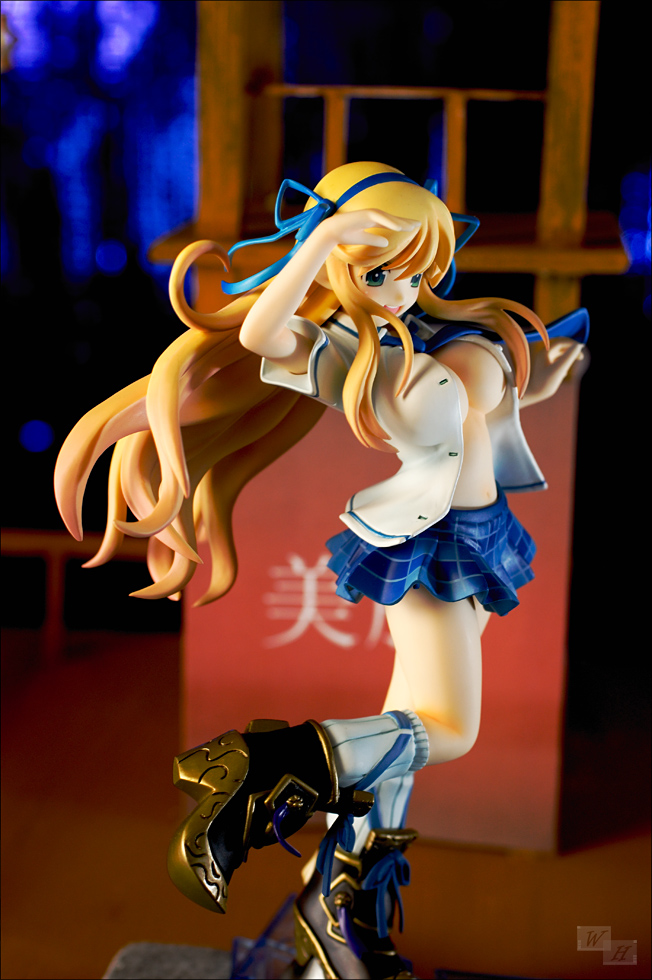 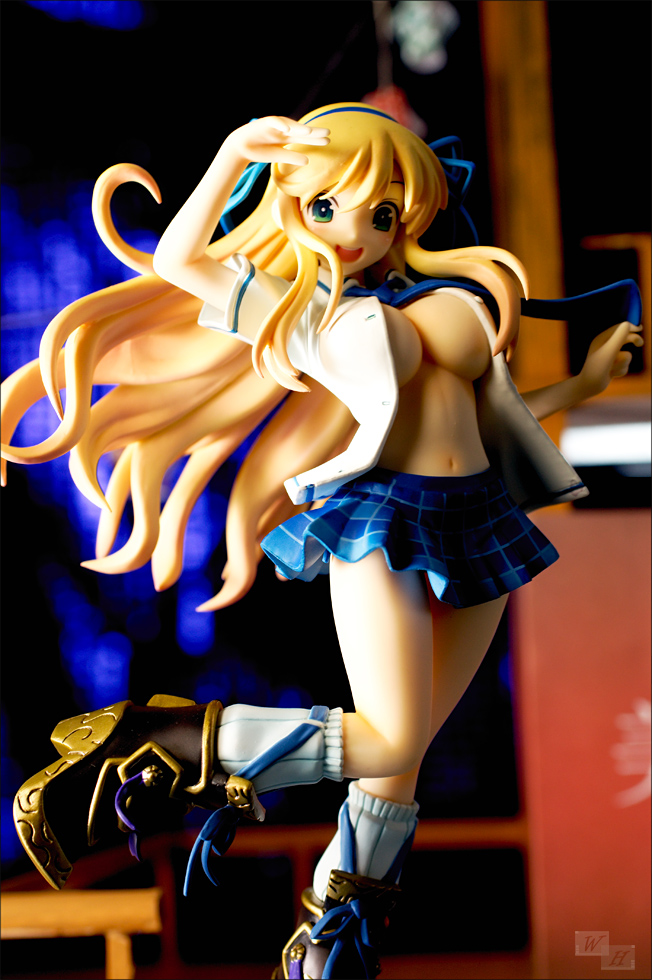 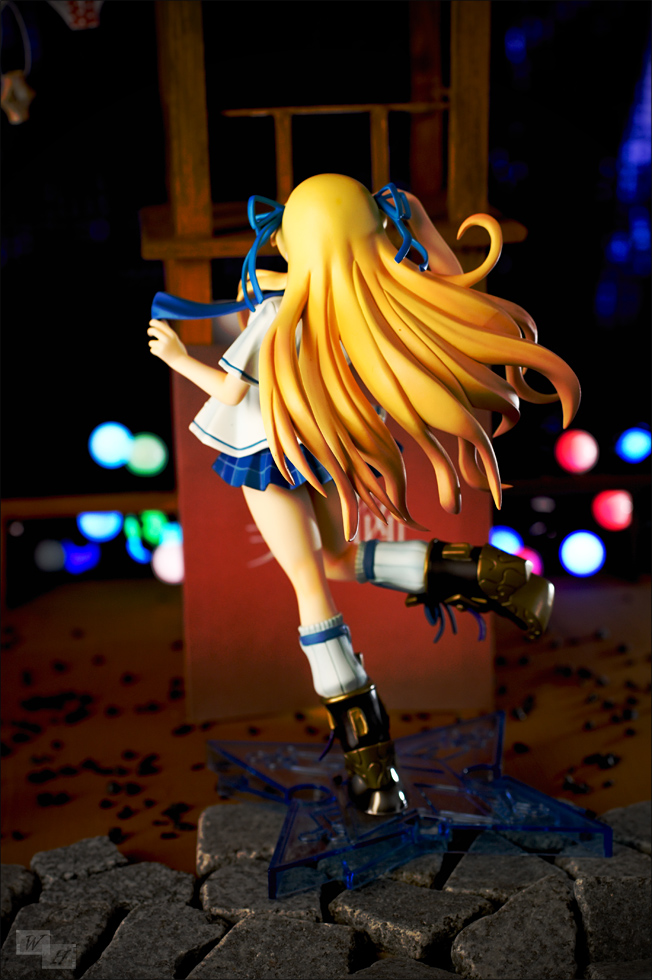 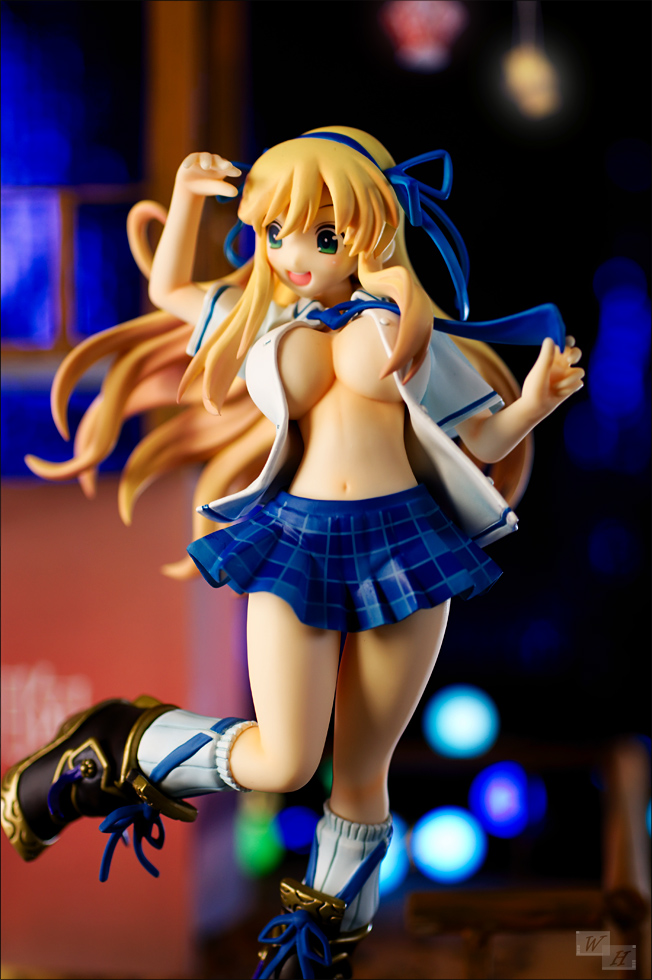 Katsuragi is a nice figure, she’s the image of a bright and energetic figure and a cute blonde girl. Im no real fan of her personality, but I love her character design, the clothes, the colors and the overall style. The figures quality is good with appealing sculpting and nice details, she also has a solid feel to her.

Katsuragi was made by the same sculptor  and so she looks very good next to Hibari, it’s nice that they are a matching in height and style. Overall the Senran Kagura figures from Phat Company are really nice. A version of Katsuragi which is more focused on the curves and and a bit bigger, is the upcoming one from AmiAmi zero. Im not disinclined to get this one as well. 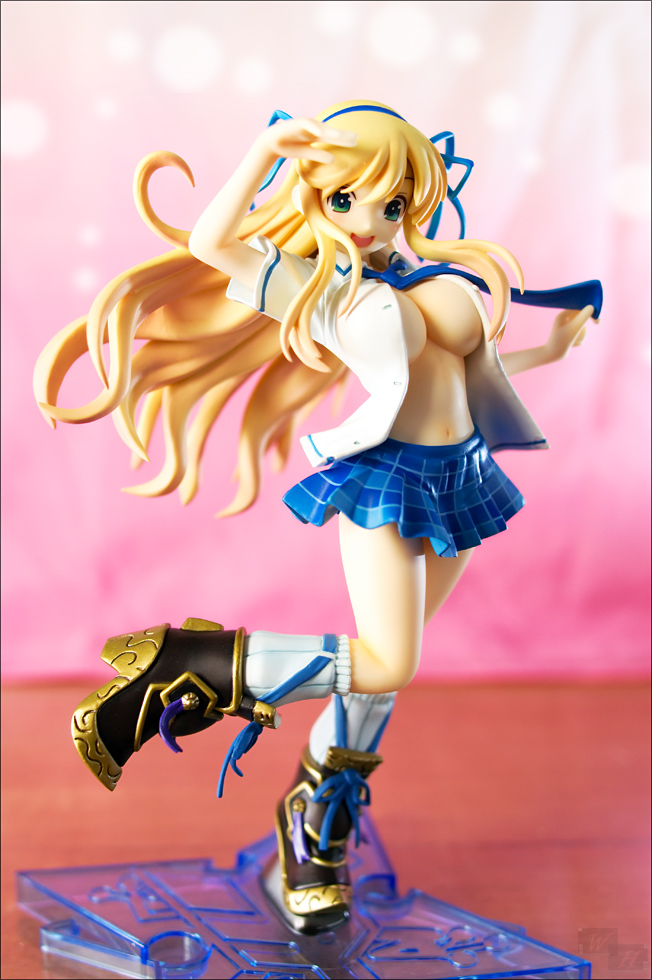 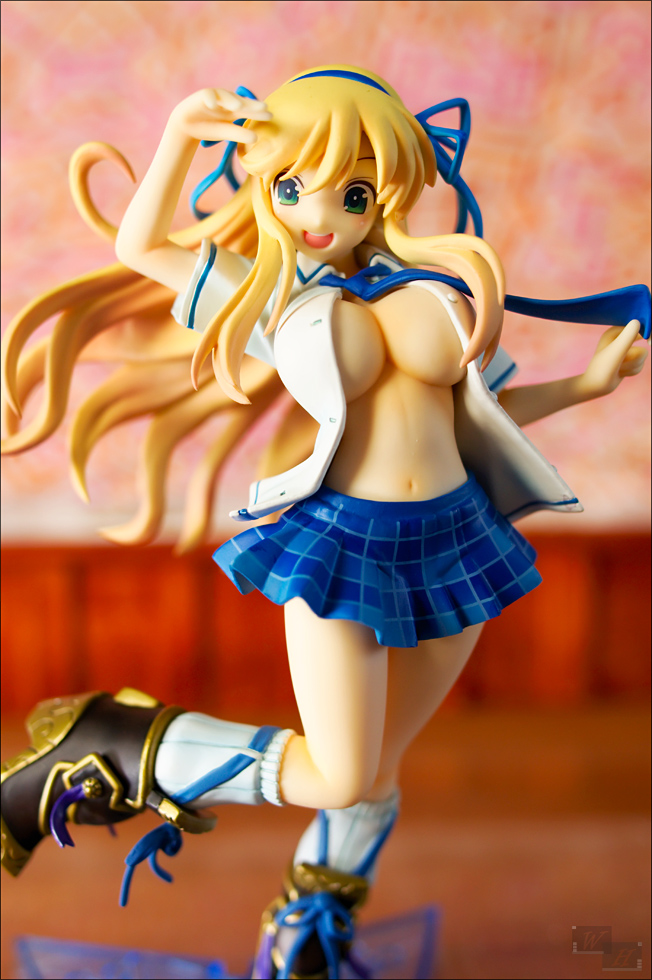 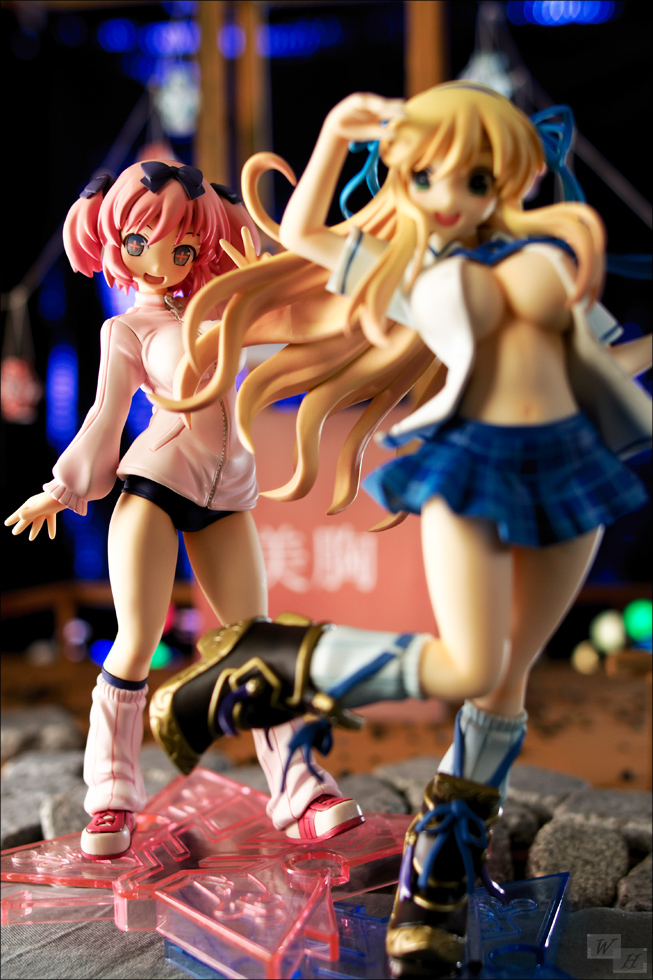 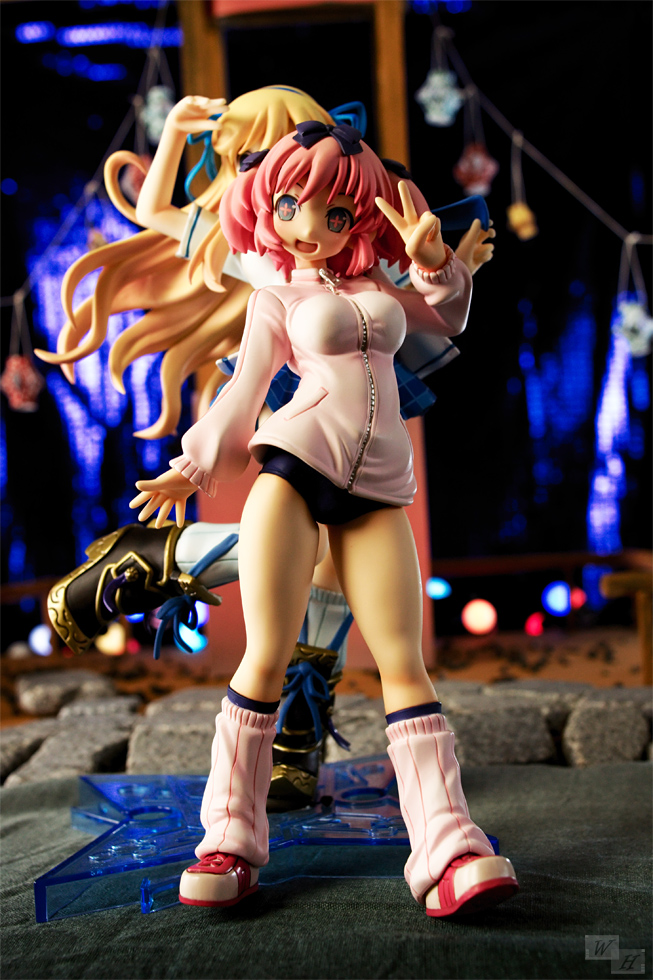 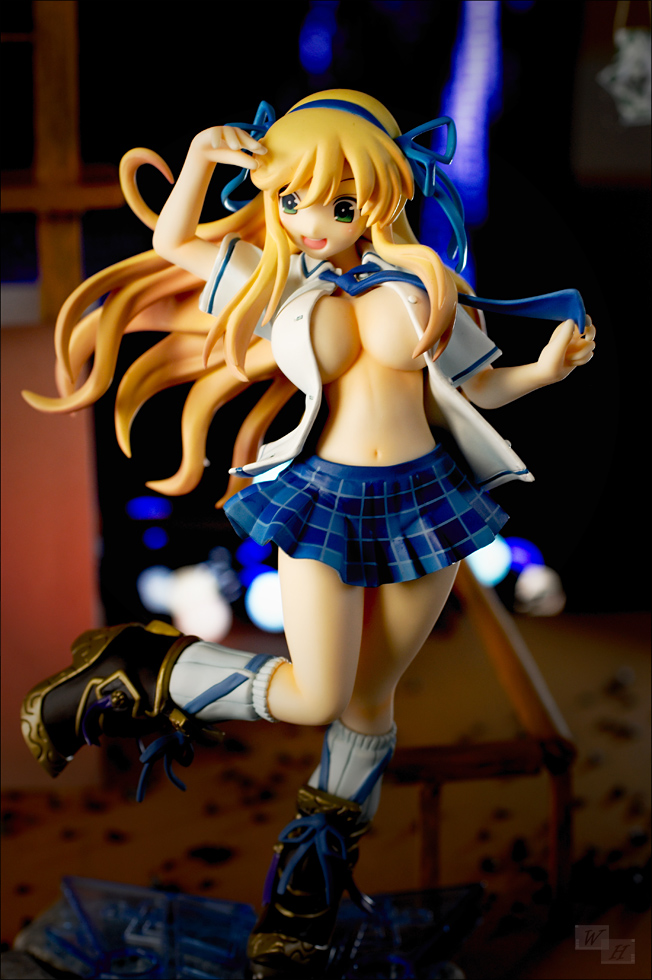 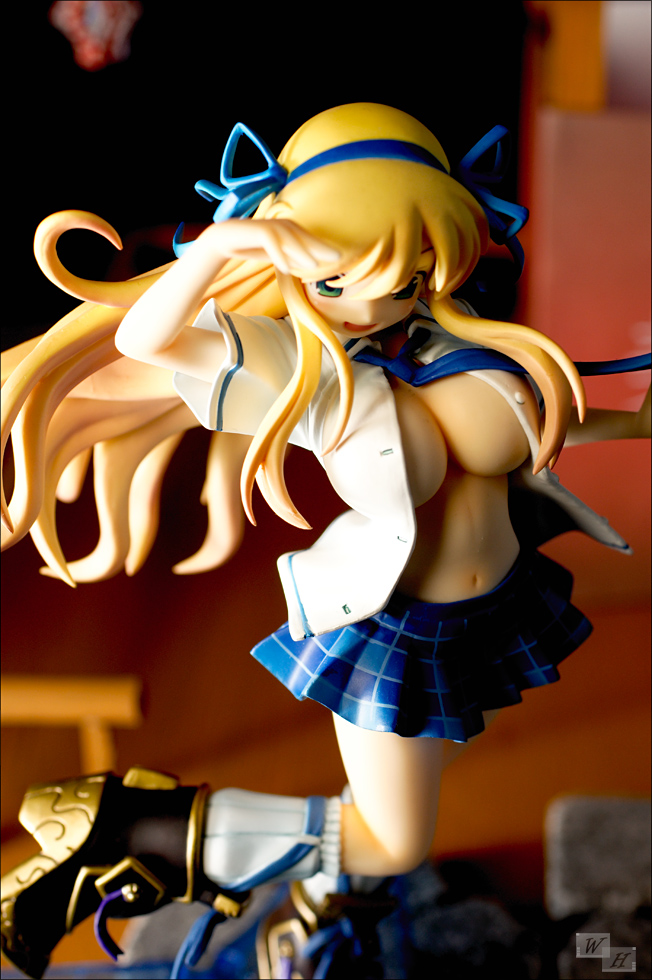