It felt like ages since I’ve reviewed a figure of my favorite 2D girl, I didn’t lose interest but the recently released figure where not what I wanted, especially not that giant rubber doll with the soulless expression. The announced figures for December and next year look really promising.
I already preordered ALTER’s Sonico – Santa swimsuit and Orchid Seed’s Chearleader version.

In December I’m eagerly  awaiting the release of the 1/5 scaled Sonico – SoniComi Package version from Orchid Seed  ( ＾∇＾). In the meantime I received a lovely prize figure.

There have been a burst of interesting Super Sonico prize figures recently, Taito and FuRyu created really nice ones like this. Sonico figures don’t always recreate her character very well but the one in this review does.It’s Premium Prize Super Sonico – Space Police version from Taito.

Let’s face it prize figures never seem to compete with regular ones, at least that was my opinion.
But I liked the grey prototype of this certain one that I took the gamble with 1590 Yen at hand. 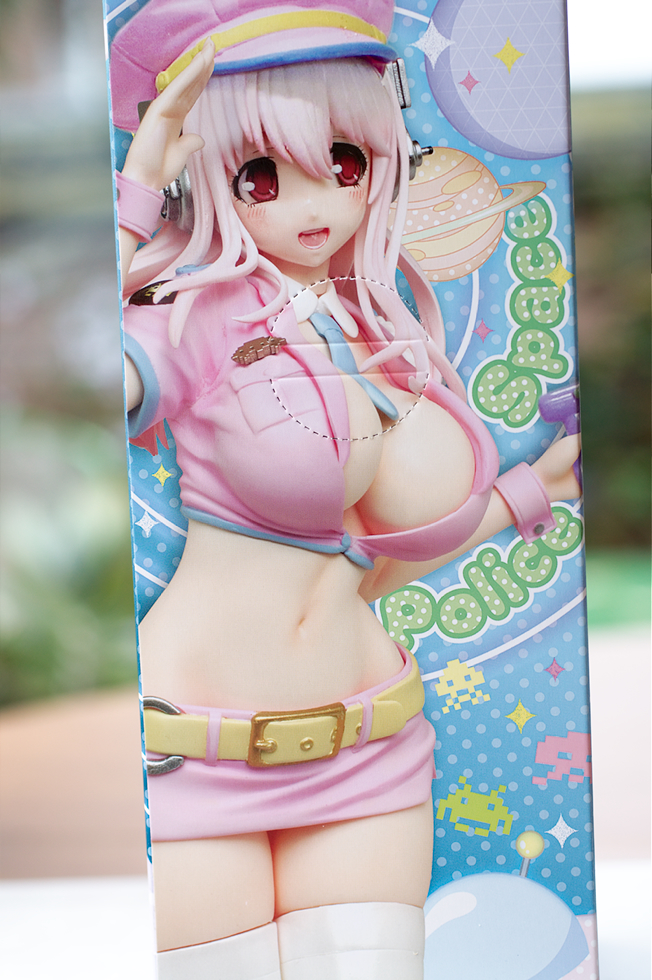 Sonico – Space Police arrived in a very pretty no window box, I actually prefer solid cardboard boxes over windowed ones. When you buy them in a shop you would like to take a look at the figure of course, but like me, the majority buys the figures based on promo pictures anyway. 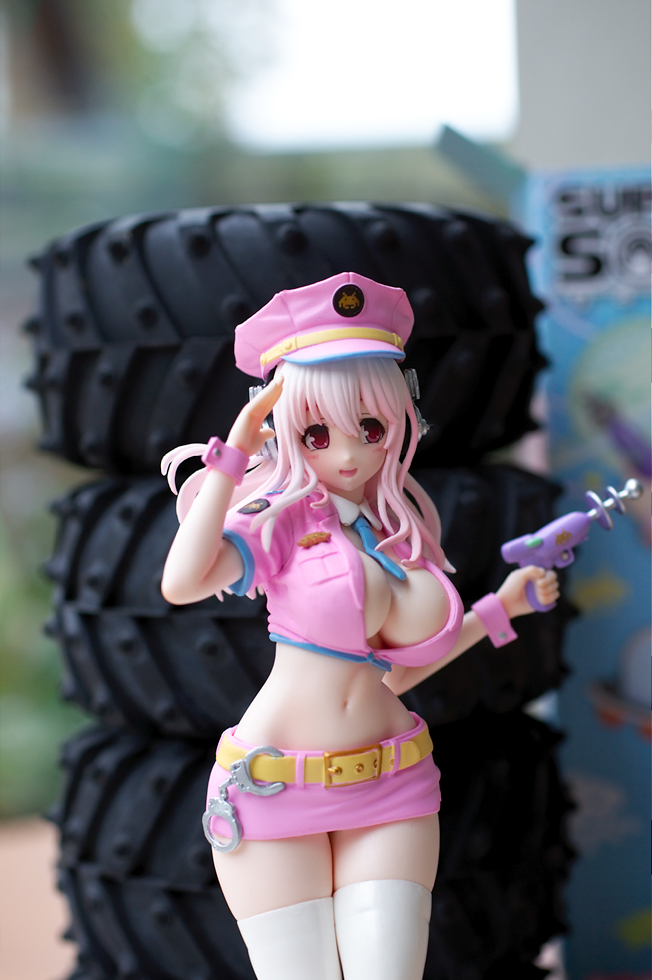 Sonico – Space Police was manufactured by Taito and released in the middle of October. Here is a picture of her how she looks straight from the box and put on her base, no scratckes no broken parts. Sonico has a nice curvy body squeezed in a modified pink police uniform, she greets us with cheerful salute. With 20 cm in height she can be considered as a solid 1/8 scale. 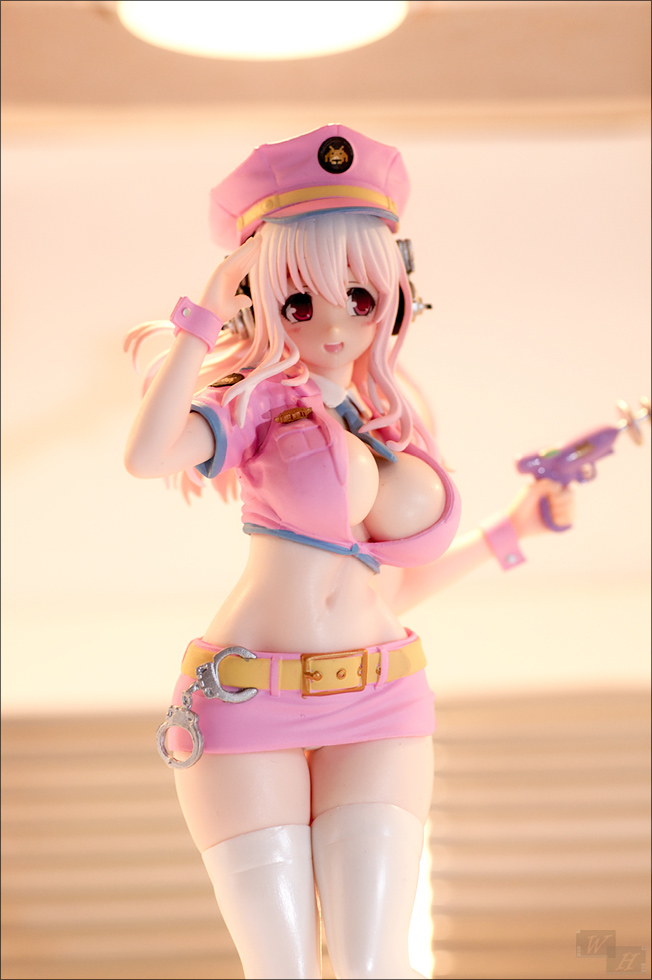 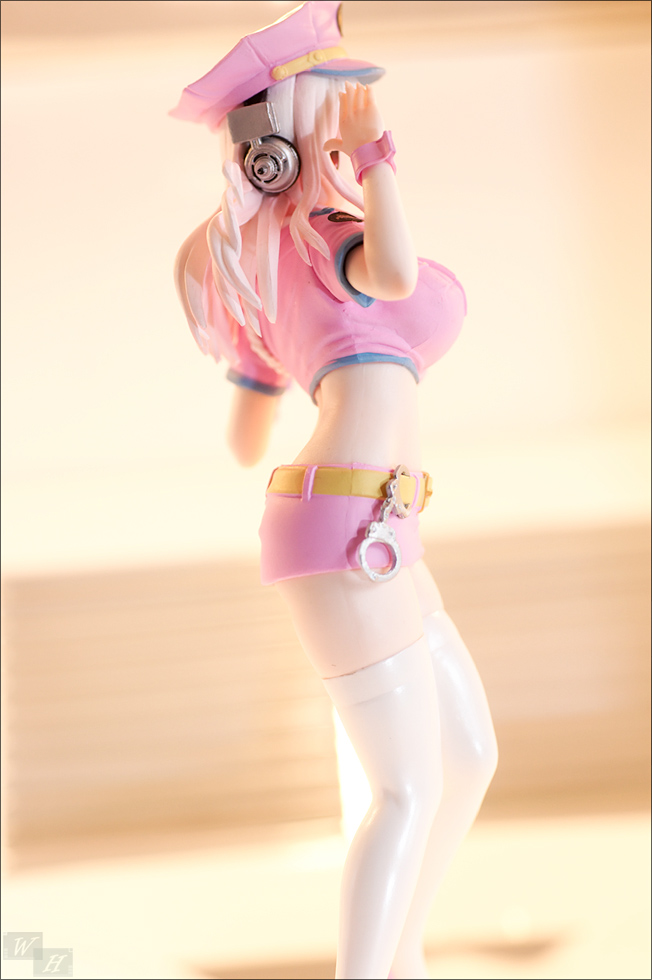 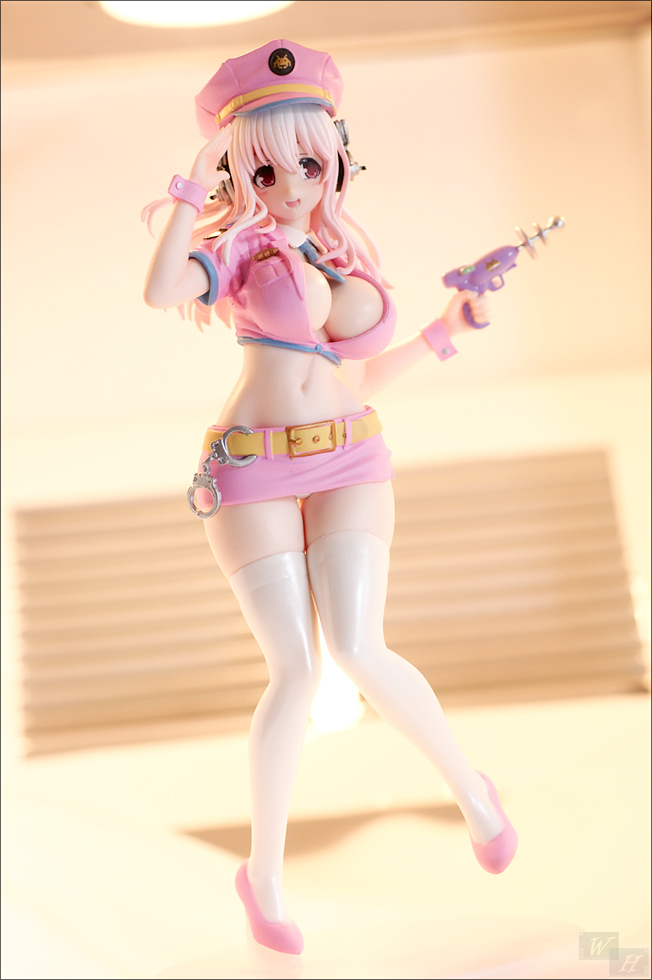 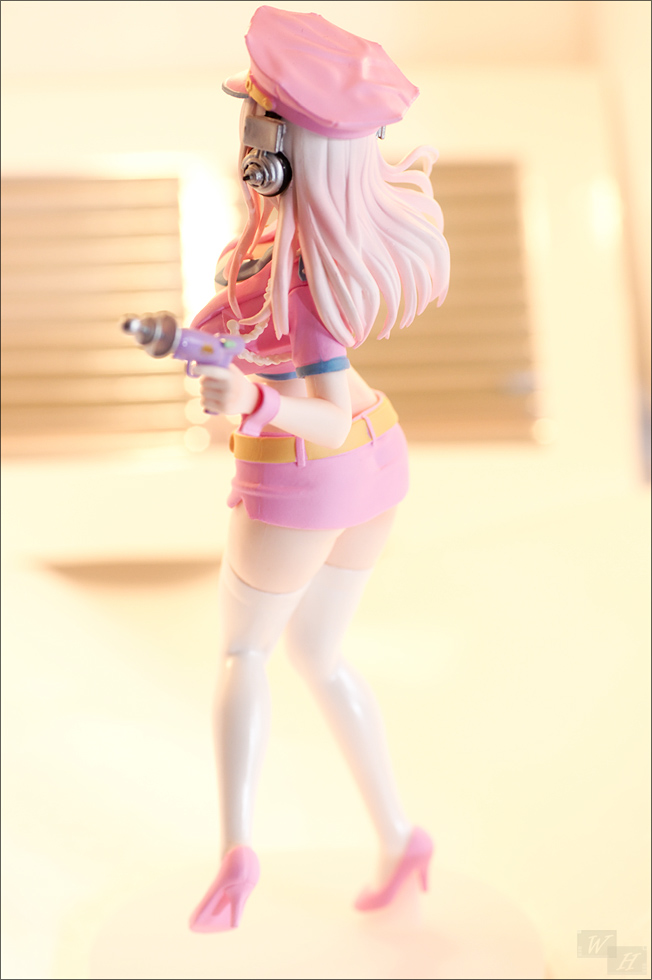 That’s the figures overall appearance, her outfit looks cute and sexy at first I thought  her outfit  would blue, but it turned out to be pink, which also suits her very well. The figure skin doesn’t seem to be overcoated with paint, it seems to be straight out of the “parts printer” machine, nevertheless they maintained a good looking skintone with a matte and opaque look.

The police uniform looks nice on Sonico, her shirt is quite open and exposes the impressive bust, her belly is exposed and her skirt also seems to be very short. I really like her nice looking hat on her, in case you are wondering about the logo, Taito is somehow connect with the old Space Invaders game. It’s a detailed outfit with a realistic police uniform design, it shows nice wrinkles and folds overall. It’s simple colortheme  consist of pink, yellow, white and blue.

The broad belt of the figure looks especially well ssculpted and has pair of handcuffs attached. 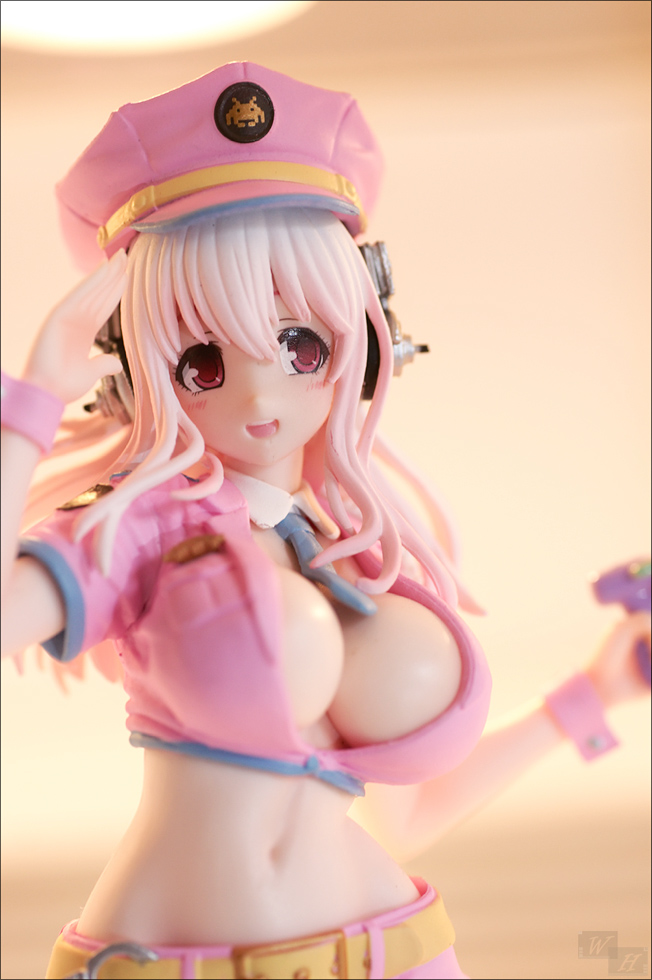 Im positively surprised by the quality of the hair, it has very fine fluffy strands and a nice flow to it, these seperated strands give it a dynamic look. The color shows a gradient from light pink to a darker tone of light pink. Under her police hat Sonico is wearing her regular set of headphones, also quite detailed. Sonico’s face is really adorable, it  captures the happy, childlike innoscense of her character very well.  I also like her lively eyes with strong blush underneath, the facial expression is completed by a cheerful big smile with an upper front teeth line, really cute. 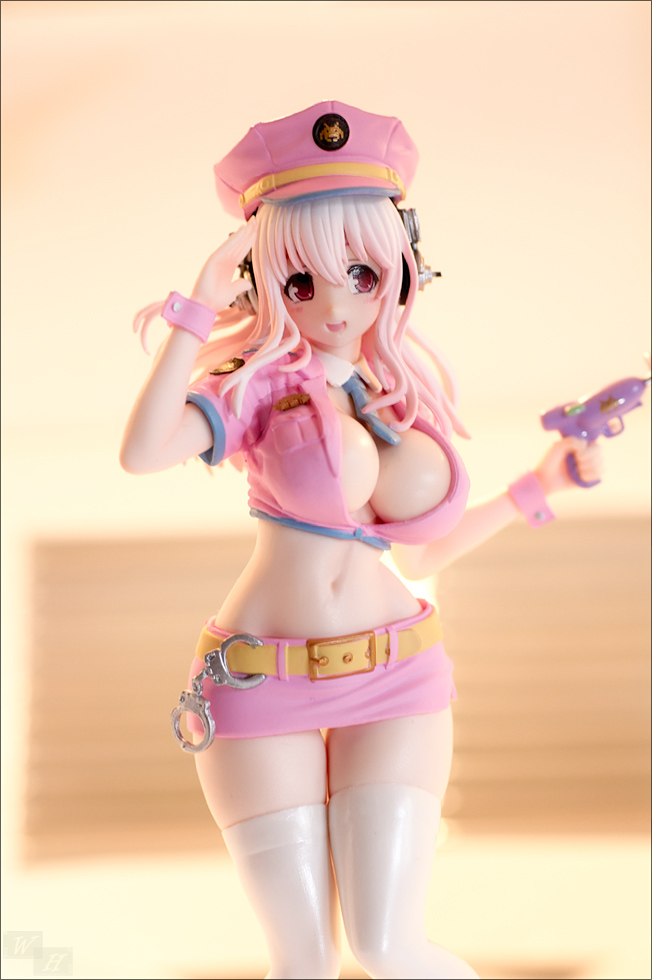 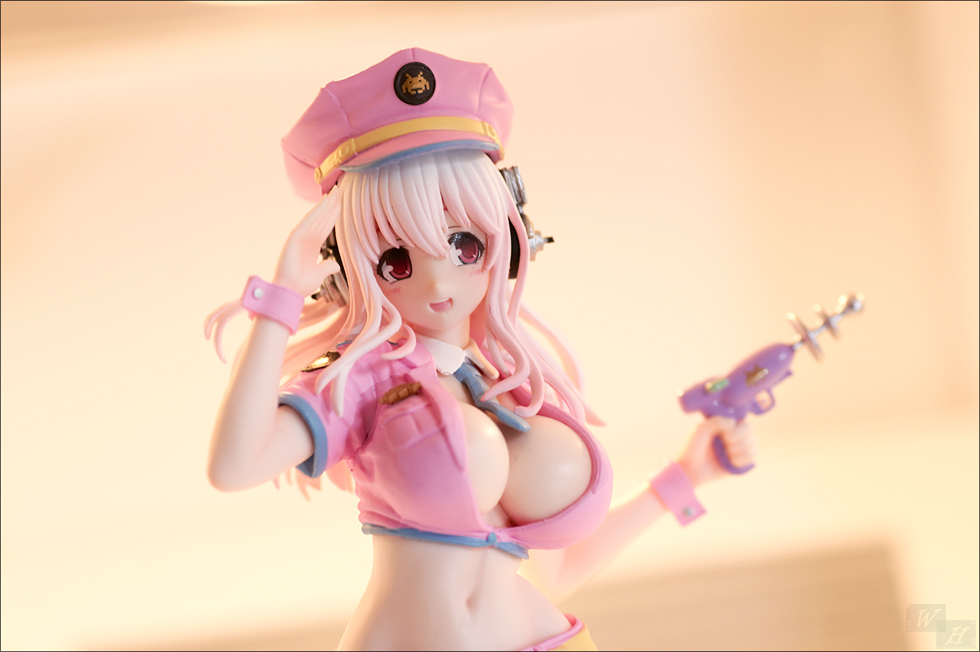 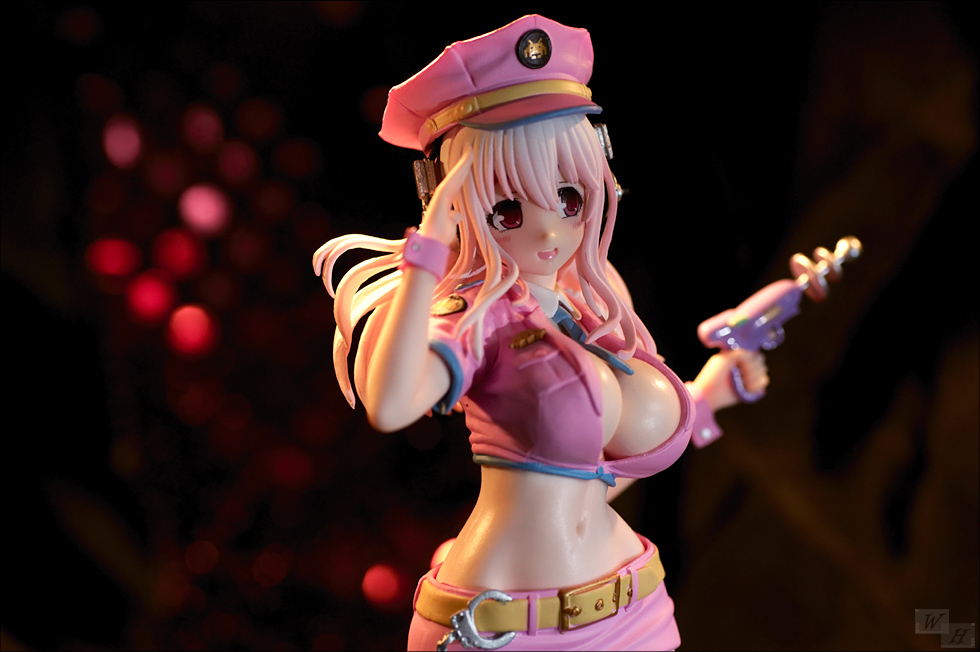 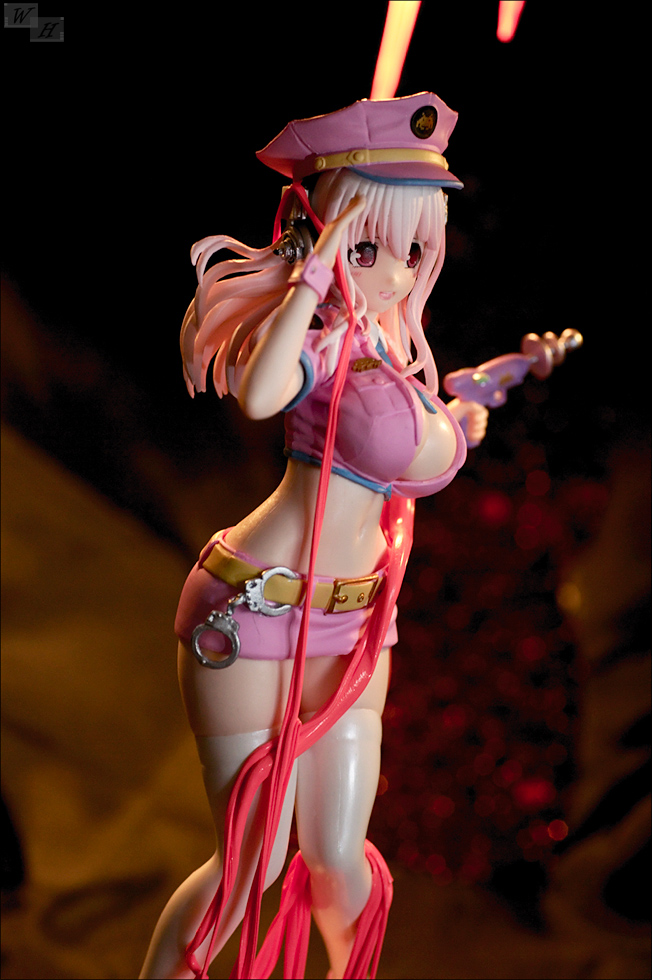 Of course Sonico looks as buxom as she is supposed to be, she features broad hips, a wasp waist and a rather impressive bust. Not to forget her meaty thighs which are accentuated by these white stockings, they have a little pearl shine texture applied. The body sculpting is done in a conving way, even on the backside, it’s sexy how her buttocks are slightly flashing under her short skirt. Taito also did a good job on the articulation of her arms and fingers. 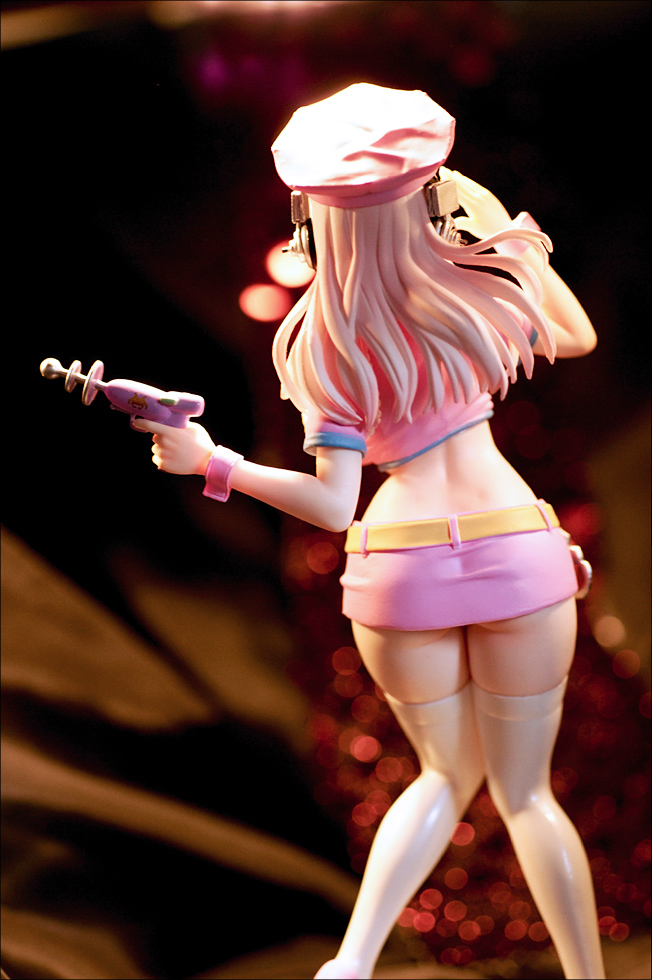 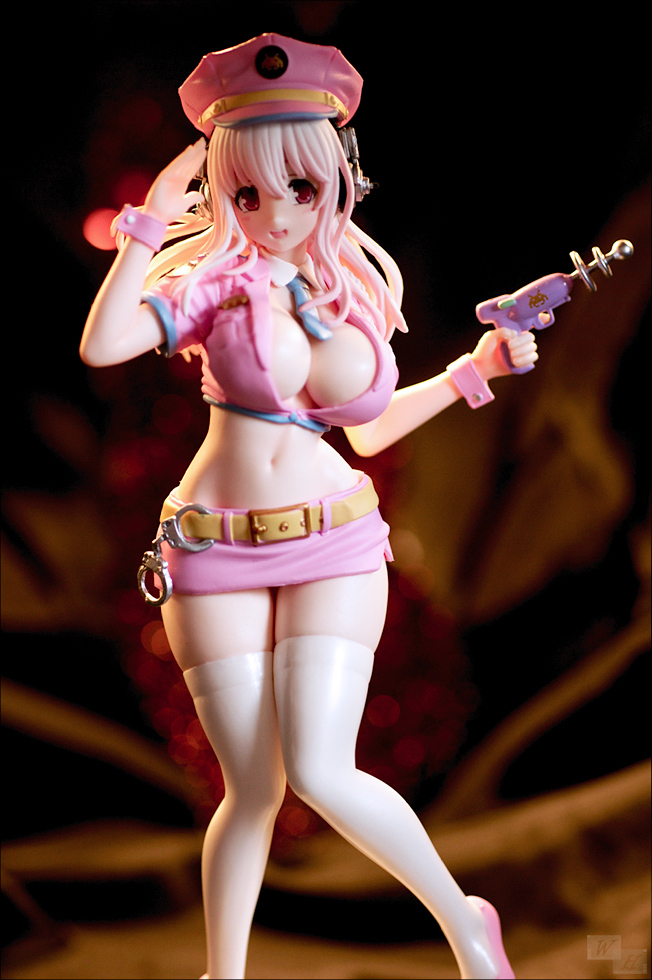 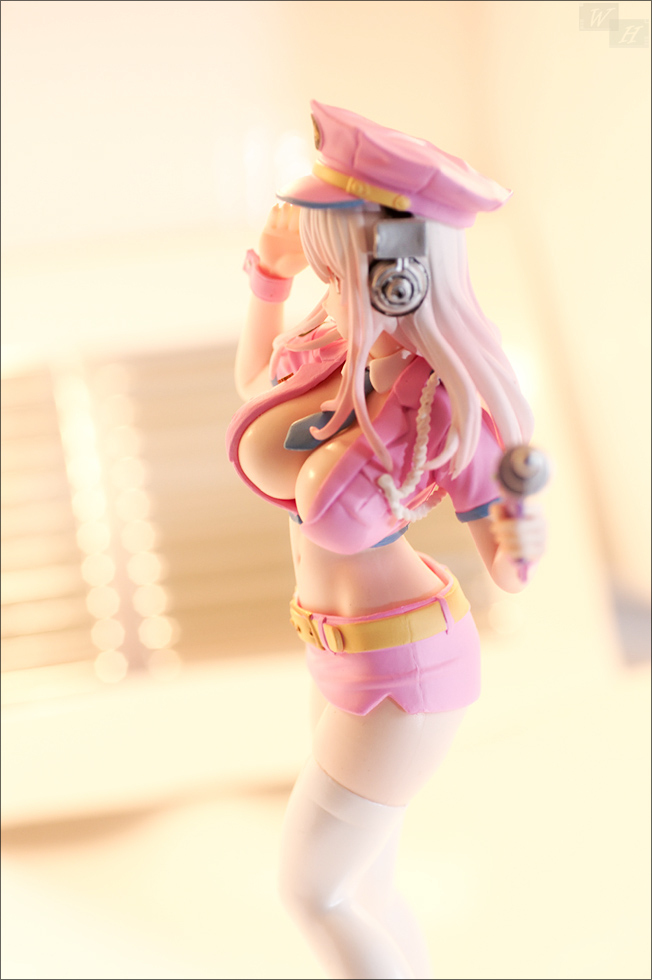 The figure is surprisingly well made, on closer inspection there a few minor seamlines at the sides of her clothes and body, not really noticeable on first look, but on second look, there is a little overpainting from blue and pink at the end of her shirt and a little roughness at her shirt. 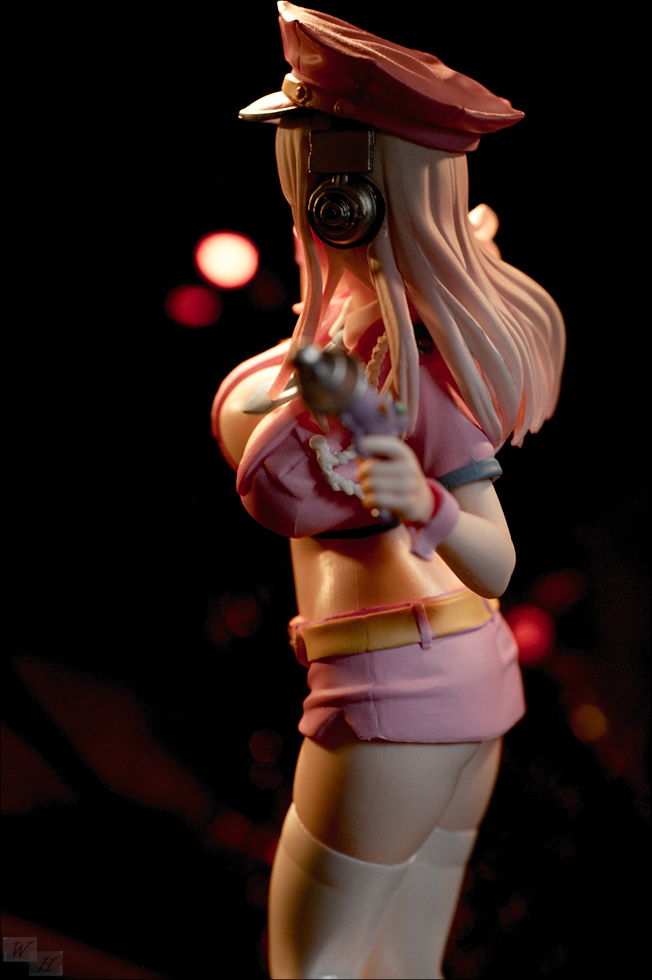 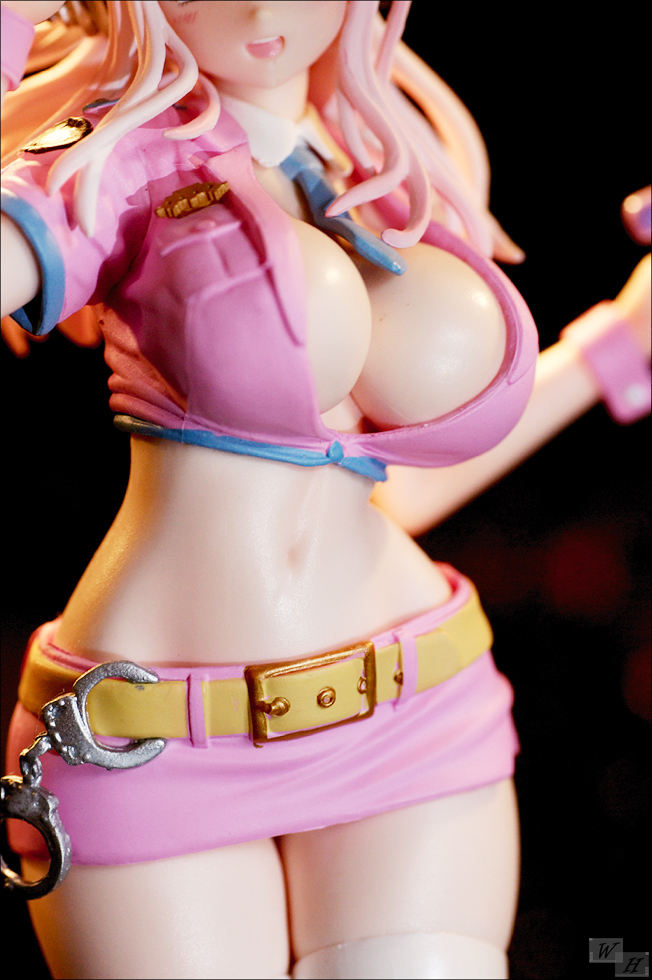 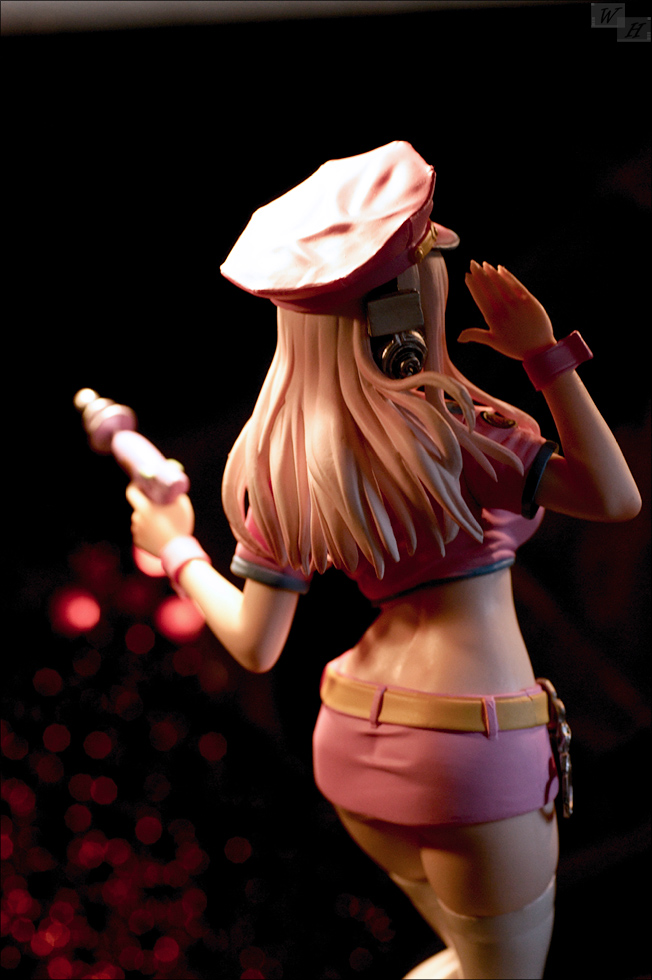 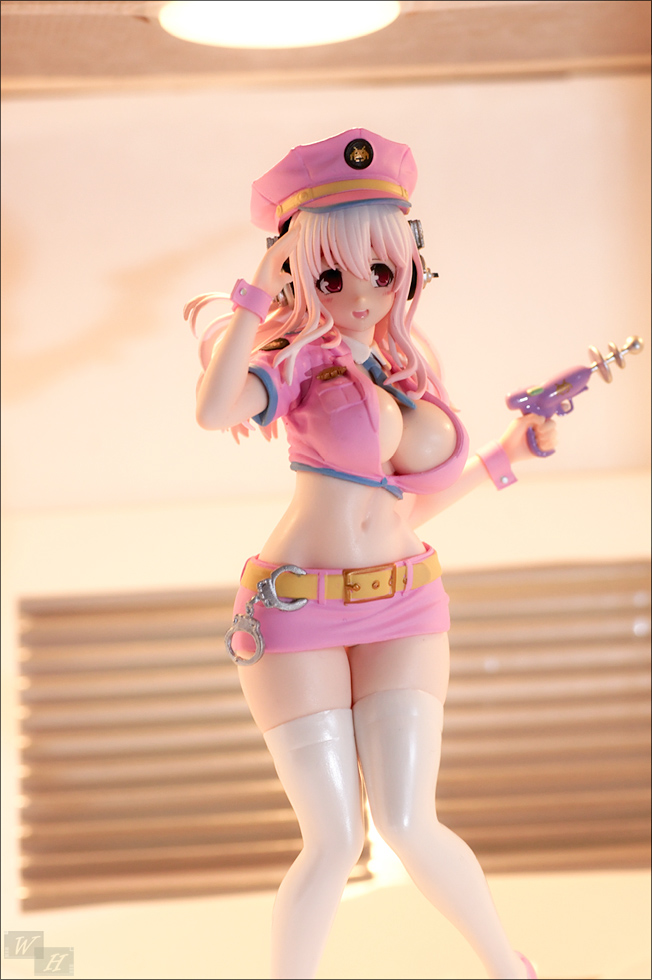 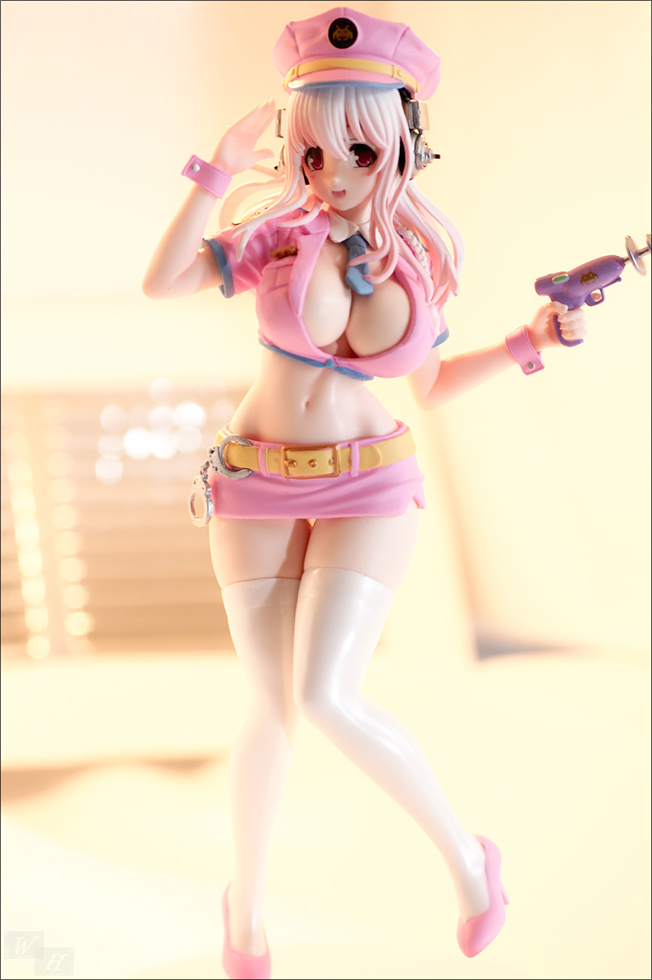 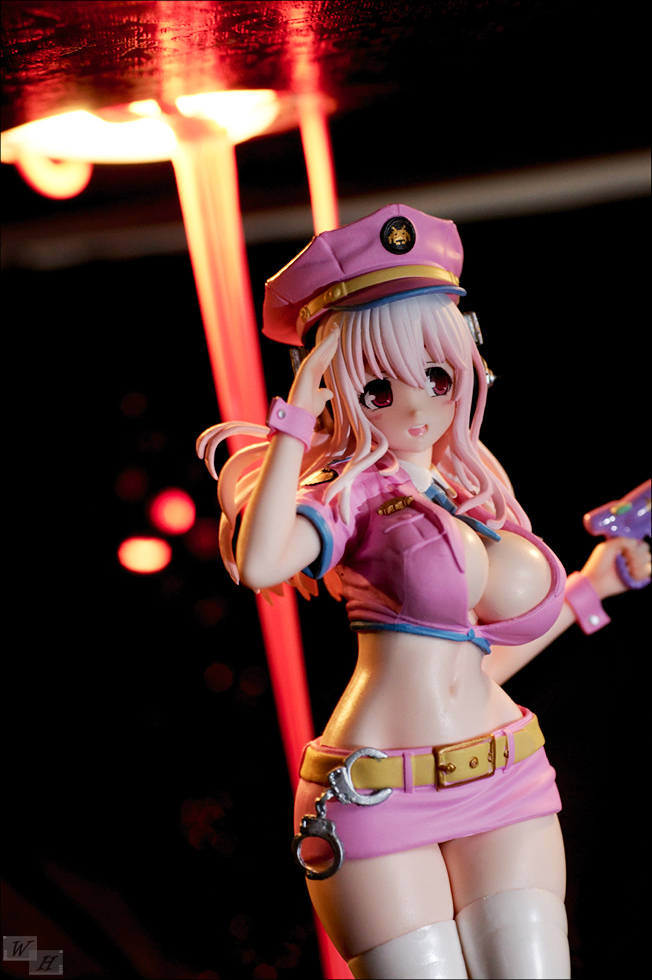 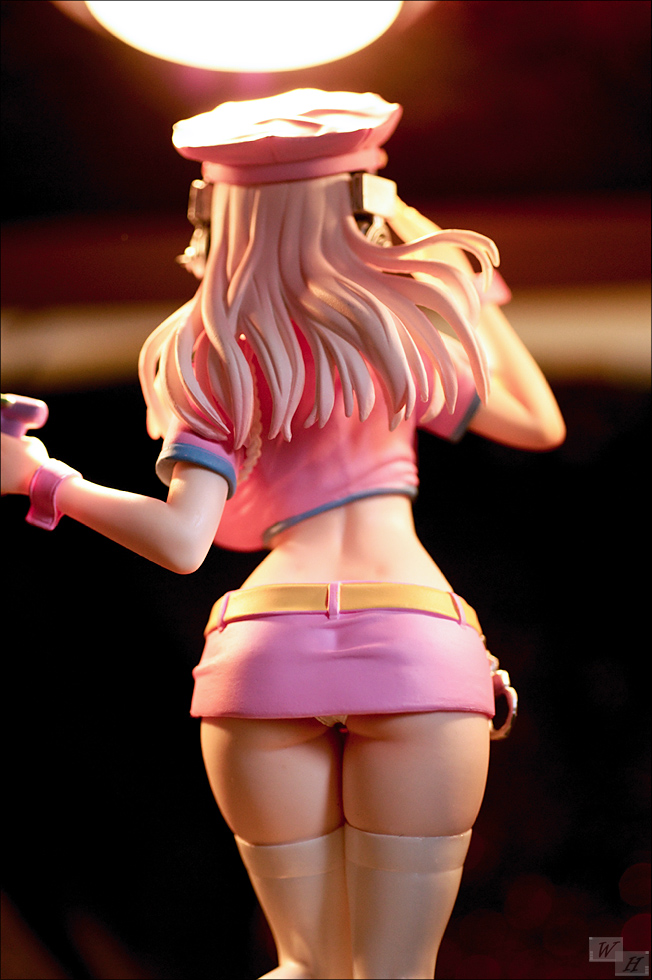 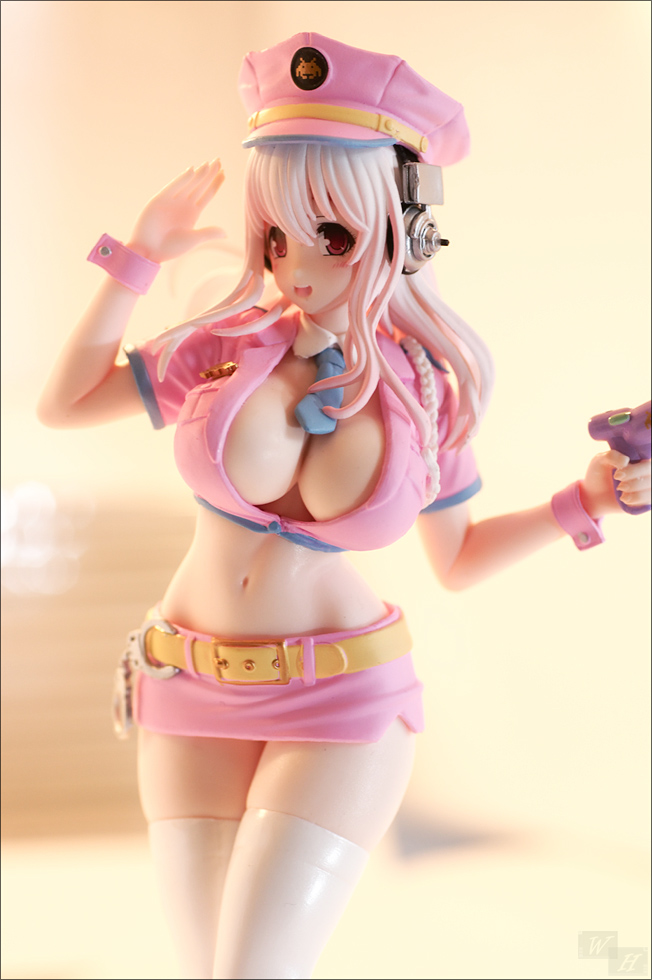 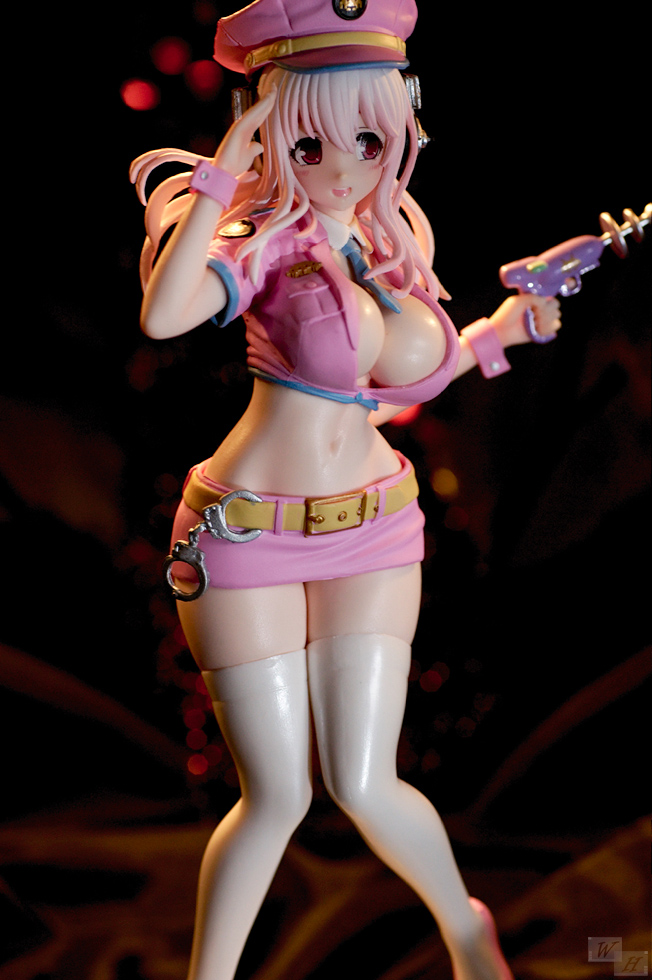 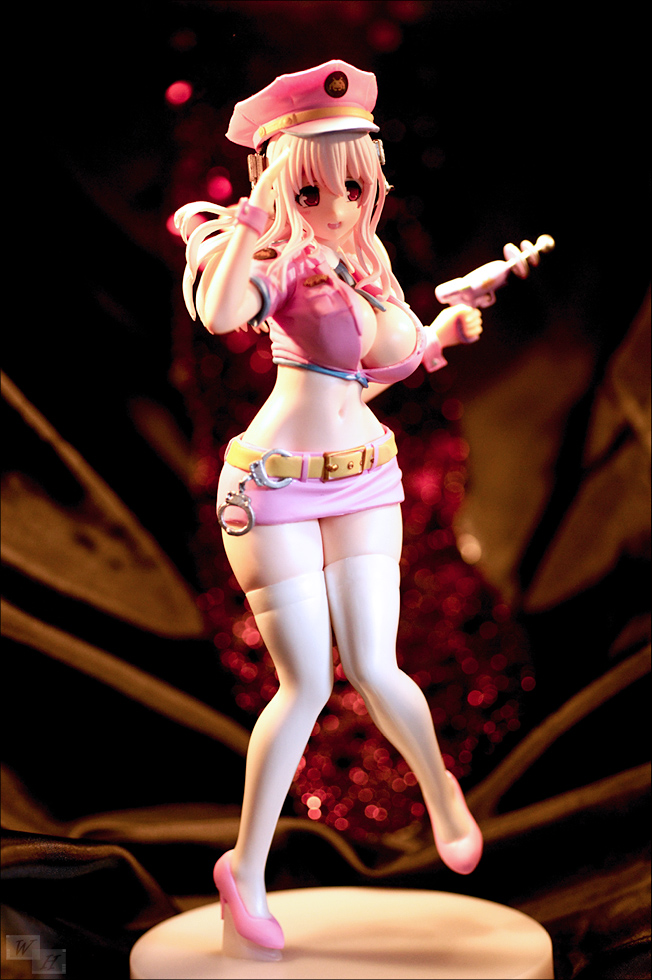 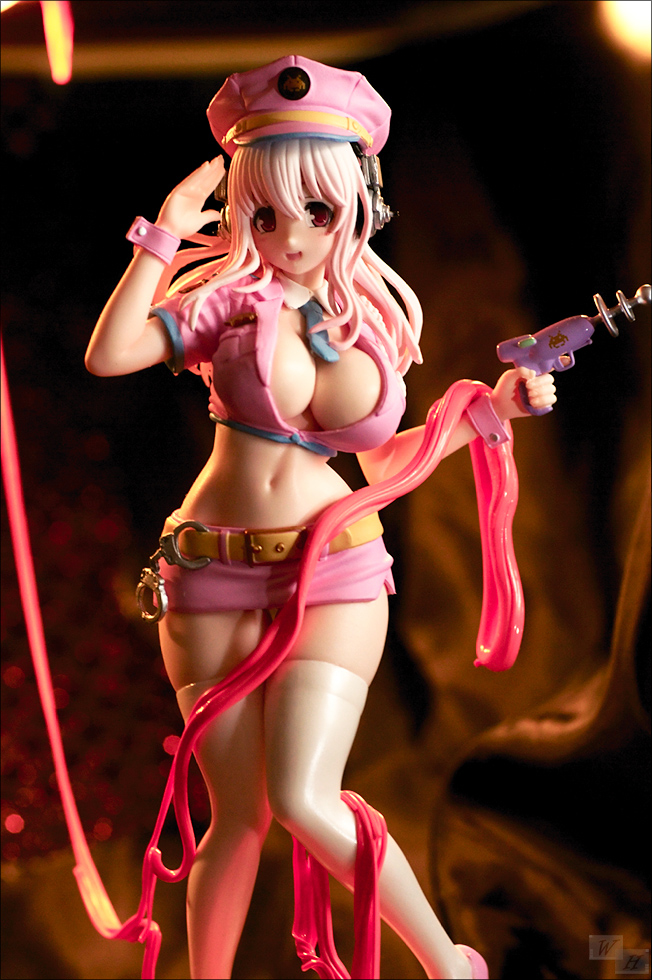 I have a little better opinion about prize figures now, they are not always of crappy quality, often these kind of figures appear more creative than regular releases.

This Sonico – Space Police figure has a very good sculpt and is posed in an cheerful manner, on her clothes there is no active shading present, but the details and wrinkles make up for it.
Sonico as cop looks very cool, cute and really sexy. The most important thing is that the figure resembles the character and thats definetely the case here.

Of course there is a quality gap between prize figures and regular releases, since they have less budget for manufacturing, but for 1590 Yen you can’t find a nicer Sonico than this with a decent quality, I like Sonico Space Police a lot. I also ordered the Sonico – Sweets Time version from FuRyu, hopefully she will leave a positive impression as well