Non Non Biyori was a personal highlight of the Anime Fall Season 2013, it is a 12 episode long anime adaption of the manga created by Atto, the show was produced by Lantis, Media Factory and Silver Link. Non Non Biyori takes the viewer to the peaceful countryside of a random rural village somewhere in Japan. The area depends mainly on low degree agriculture, it’s a village like Higurashi, but with a little less infrastructure. The story centers about the funny everyday adventures of the elementary schoolers and middle schoolers of the village. 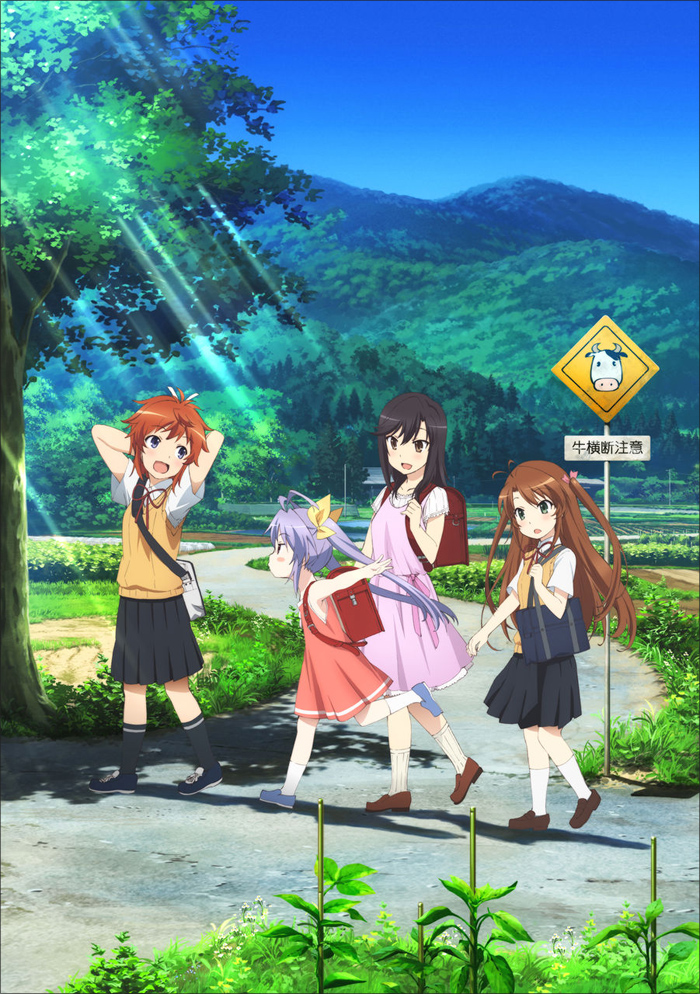 Such far off villages with a low population can’t afford a big school with a number of teachers, so one teacher supports pupils of different grades during the mainly self study lessons.

The  pupils of different grades are all in one classroom and also spent their freetime together, the younger ones play with older ones without complaining, they are like family to eachother.

Each episode is divided in a few short stories that portray the everyday life of 5 kids and their circle of acquaintances, some are fun, hilarious and even heartwarming from time to time.

The characters mainly consist of female characters and most of them are relatives, which is common in all villages. There are the Koshigaya siblings, Natsumi, Komari and brother Suguru who doesn’t talk. Komari is the older sister, but she is shorter than the wild and tomboish Natsumi which makes her sad sometimes. But she’s a very pretty girl, the kind of clumsy type.

Renge is a curious little girl with a slightly fuzzy and deep voice, sometimes she appears timid, but she’s actually very energetic. She is the center of the group, the others give her a lot of affection and play along, even if it’s a bit silly sometimes. Renge is like a little sister to everyone.

Hotaru moved from Tokyo  to said village, the very first episode centers about her and the cultural “shock”. She appears like a well nurtured city girl, but she’s a little shy and weird actually. She is besotted in Komari and enjoys being together with her. Another reappearing character is Kaede who owns the local Candy Store,  she often appears rather unmotivated and aloof, but has a good heart. She is quite attached to Renge since she often babysit her in the past.

It feels a bit like the everyday kids life of 2 decades ago, without much stress and sorrows. I also grew up in the countryside, the middle German lowlands might not be as wonderful as the japanese mountains, but anyway playing in the dirt or exploring the nature and parts of the village with friends was definitely fun. I’m glad that I didn’t grow up in a City for sure.

Non Non Biyori is really funny, but has no loud comedy, it’s humor comes really natural with the very well timed words at the right time and some hilarious situations placed into the stories, it knows how to keep the audience at the screen.

What makes this show special  is that it has, putting the comedy aside, something like a heart when it portrays emotional scenes, like the episode where Renge met a girl of her age and befriended her. The friend came to  the village during summer vacation to visit her grandma, but one day vacation ended Renge didn’t know that vacation ended the day before. It hurt to see the little girl with the big eyes realizing that they won’t be able to play together this summer anymore with the close up of her face and the green scenery in the back for several seconds,
I could feel the pain and loneliness in her heart. Since this  is no sad anime after all, the grandma of handed over a  nice letter from her friend, where she promised to come back next summer, Renge got back on her feet. Most of these emotional aspects are actually involving Renge. 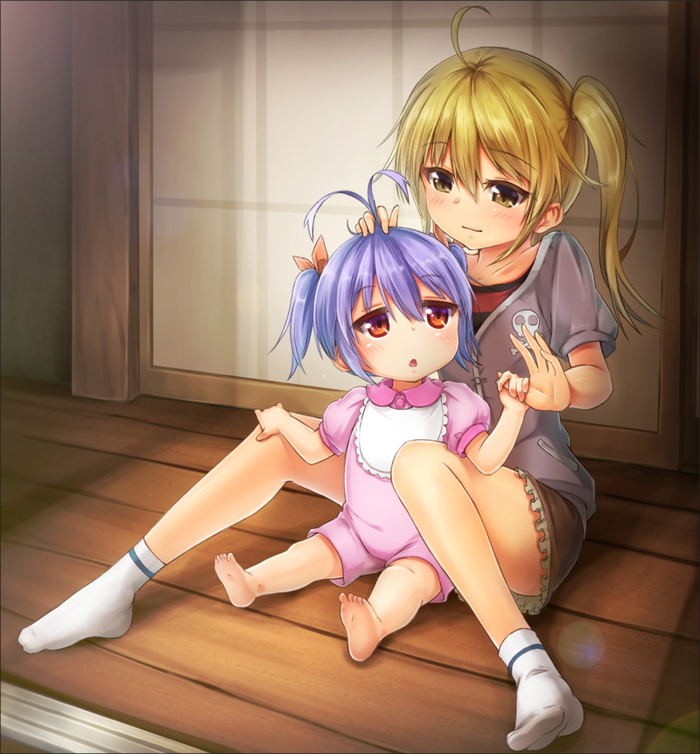 I guess, the main selling point of the show is the entertaining and soothing character of these short stories within the peaceful and beautiful village full of healthy nature. The characters are nicely fleshed out without relying to much on stereotypes. The observatory eye can’t ignore to notice that the ways of entertainment are limited in this far off area, but these kids always find ways to have fun.

The Animation Quality of this show is appealing, the inviting scenery of the area is drawn quite detailed and is brimming with vivid colors. The characters look good and have cute faces, it is no really realistic style, it looks like in most comedy centered slice of life animes. With the pastel color palette they seamlessly fit in the surrounding. There is still anime without fanservice and that is something you won’t find in this anime, the characters are presented as the innocent girls they are.

Music is good as well, the opening song “Nanairo Biyori ” was performed by nano.Ripe, a catchy song full of youth and power, typical for this artist. The ending song “Non Non Biyori ” is performed by the 4 main characters, a bit crook, but definetely cute. 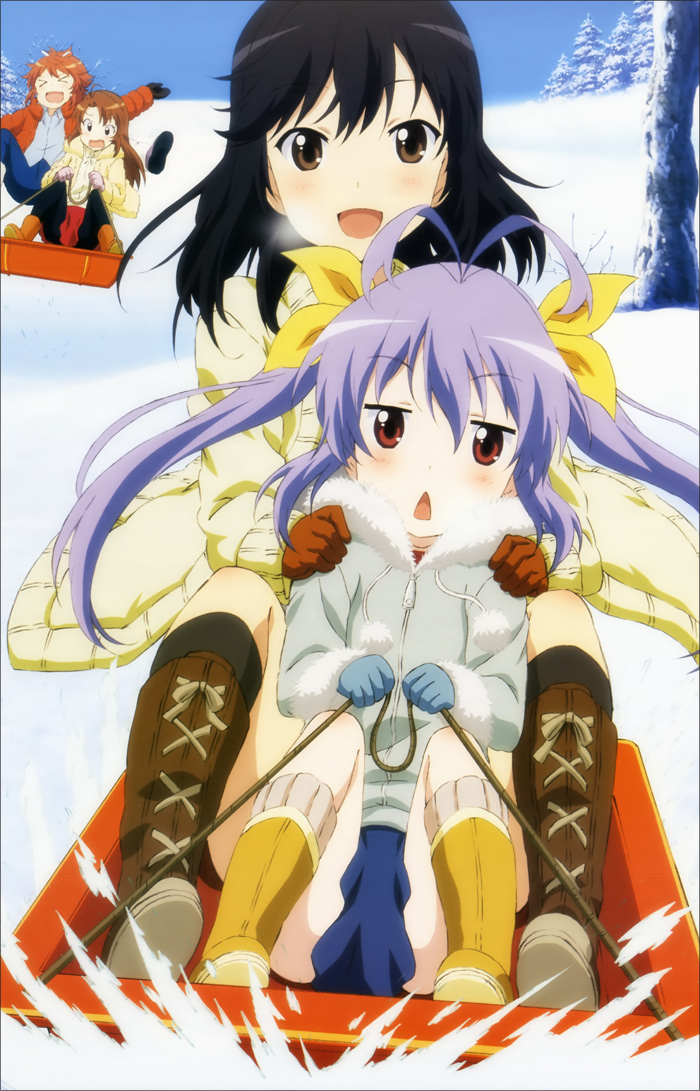 Non Non Biyori is nothing revolutionary in the slice of life genre, but it’s attempt on portraying the peaceful country life in a small village is refreshing and nice, the short stories are diversified enough for the 12 episode long run. The characters are all interesting and like able in their own way without being exxagerated. If you’ve liked Tamayura or Minami-Ke you should give this anime a try, it’s a really good lighthearted anime with some entertainment qualities and heart.