When you think you have seen everything in anime Sekai de Ichiban Tsuyoku Naritai! will disabuse you. SekaTsuyo is a 12 episode long  anime which aired during the Anime Fall Season 2013 from October till December. It was produced by Arms who always combine fanservice and fighting in their shows, Maoyuu Maou Yuusha might be a popular exception.

The show combines the world of women wrestling and Idol industry. Someday everybody learned that WWF and the likes are scripted events and no real tournaments where the best one wins. Also women wrestling always appeared a bit silly as far as I remember.
In SekaTsuyo they portray women wrestling like a real sport without much of fake events or much *bling bling*, it’s more honest competition than show.

Sakura Hagiwara is 17 and the heroine of this show an honest, cheerful and considerate girl who is part of a large Idol Group called Sweet Diva.  Sakura is a hard working and talented character and so she constantly wins the vote, of being the center girl, very much to  the frustration of her biggest rival and best friend Elena.

One day Sakura and Elena have an appointment in a wrestling gym called Berserk, it was planned that they should be filmed while doing some light training, but after Elena acted a bit disrespectful in the gym which calls the  ger of one of the female wrestlers, Kazama Rio. During a little quarrel between the wrestler Kazama and Elena one thing leaded to another and Kazama insulted Sweet Diva as silly bimbo idols, this offended Sakura with her honor as idol on the line Sakura challenges Kazama to an official match. A quite stupid idea.

Sakura tries her best, but never had a real chance of winning. After her quite humiliating defeat Sakura announces to take a break from Idol business, to fully concentrate on becoming an professional wrestler until she had beaten the girl who kicked her ass in the recent event and insulted  her and her idol friends. The manager of Berserk allows her to train in the gym to become a pro wrestler, but the more experienced wrestlers see her as a real eyesore.

Unwillingly a coach offers to give her some advice and coaching, but instead of starting slowly the coach treats her really rough. Nevertheless, the coach acknowledged Sakura’s potential and gives her a tough training shedule, as top Idol she already has a certain level of fitness, but some quite hard months awaited the girl.

After many months of training Sakura has a final exam or something like that before she will be allowed to participate in official matches. She has to endure a barbaric ritual and really suffered this day. I never felt so bad for a girl in an anime, the duration made it even worse, also that Sakura never complained, she blindly endured it, even though she was in pain and quite vocal about it. At this point I thought about dropping this anime, since this scene looked so cruel.

As she is allowed to take part in matches she unintentionally plays safe and just gives up the match, after she is in too much pain, that this won’t get her anywhere is no secret.

Sakura’s cute cries of agony are actually rather hot, but when you see the submission moves (which means the painful bending and stretching of limbs where the opponent can hardly escape.), you can easily feel sorry for her and start rooting for her to leave the ring in one piece. 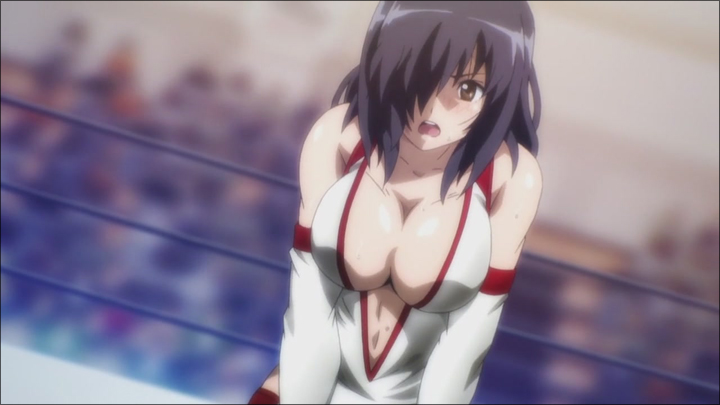 The targeted audience of this anime are males. Well, there are a few shower scenes, yet most of the fanservice stems from the tight, partially skimpy outfits of the wrestlers. Sakura’s outfit in particular, which seems like a tribute to Gunbuster is showing a lot of cleavage and skin.

Most of the girls look very attractive in close up or portray scenes, the animation style really shines.  They have minimal more muscles than the usual anime girl, which actually looks very hot. I think Sakura and most of her wrestling buddies look gorgeous.

The level of violence is rather mild, there is a only little blood, one broken bone. Also kicks and punches in the face are pretty rare, the worst scenes are  the submission moves, it’s so painful to watch and a Sakura in tears makes it even worse. I’m quite familiar with stretching pains and twisted tendons, it fucking hurts. Even from just watching  it, it hurt. At one point, I just wanted her to quit wrestling forever. Watching girls in pain is something I don’t really like in general.

Many frustrating, unsuccesful fights later, one experienced wrestler shows a heart and offers to improve Sakura’s fighting style, as I’ve witnessed this certain training, I felt really sick and angry.

The best moment of SekaTsuyo is the episode where Sakura finally gets rewarded for all the hardships and pain she suffered  until now in pro wrestling. The suffering before really made sense at this point, all the sympathy the viewer hopefully built up for Sakura was unloade in this moment. It is the kind of feeling wrestling or other sport fans have when their favorite overcomes a tough fight, match or whatever. It was a touching moment, I felt so proud of her.

The show does a good job in pacing the story over it’s 12 episodes, on the downside the anime is so strongly focused on the wrestling and the events in the gym. Well, sometimes it is showing what Sakura’s idol friends are doing. There was much more potential in it  than just that. Where it falls short is the portrayal of some free time activity or in telling the viewer a bit more about the other characters, but the 12 episode limitation prevented such things from happening.

Sekai de Ichiban Tsuyoku Naritai! has an interesting, refreshing concept of a sport themed anime, it features a charming main character with both an attractive body and a likeable personality. It was fun, often painful to follow Sakura until she gained her victory.

With attractive girls and a nice animation style the show also has some good eye candy.
When this anime would have been about males, in all honesty I hadn’t watched this show.
The wrestling moves are portrayed in a convincing way, the submission moves in particular where quite detailed. yet it appears to be more realistic than the wrestling fake on television.

When you can’t watch girls in pain, stay away from this anime, it won’t do you any good.