2012 we already took a look at the shocking truth of the figure collecting hobby costs that accumulate in one year, please join me again and face the ugly truth of 2013 in this post.

The exchange rate was very nice for figure collectors outside Japan, I actually thought that some figures were too cheap in the middle of 2013, at the moment 10.000 Yen are barely worth 70€.

Let’s take a look at the things I’ve bought this year, overall it were 33 figures that I’ve ordered,
4 of these figures were delayed to 2014. I received 28 figures + one christmas present in 2013.

Nagisa the beautiful figure with a rather cold face expression. The lady version of Takamachi Nanoha from Alphamax was a really nice purchase, I also took her along during my vacation in France, where she looked even more beautiful. Yoshii Hotori the shy P.E. teacher who looks like a middle school girl and is dressed in a lovely sport outfit. Ignis Endless Winter a spectacular figure in a white wedding dress, also her youthful face expression is rather charming, under her dress she also know how to convince. Leviathan from The 7 Deadly Sins was a very appealing punk rock demon girl and her facial expression shows a nice sense of  cute disagreement. 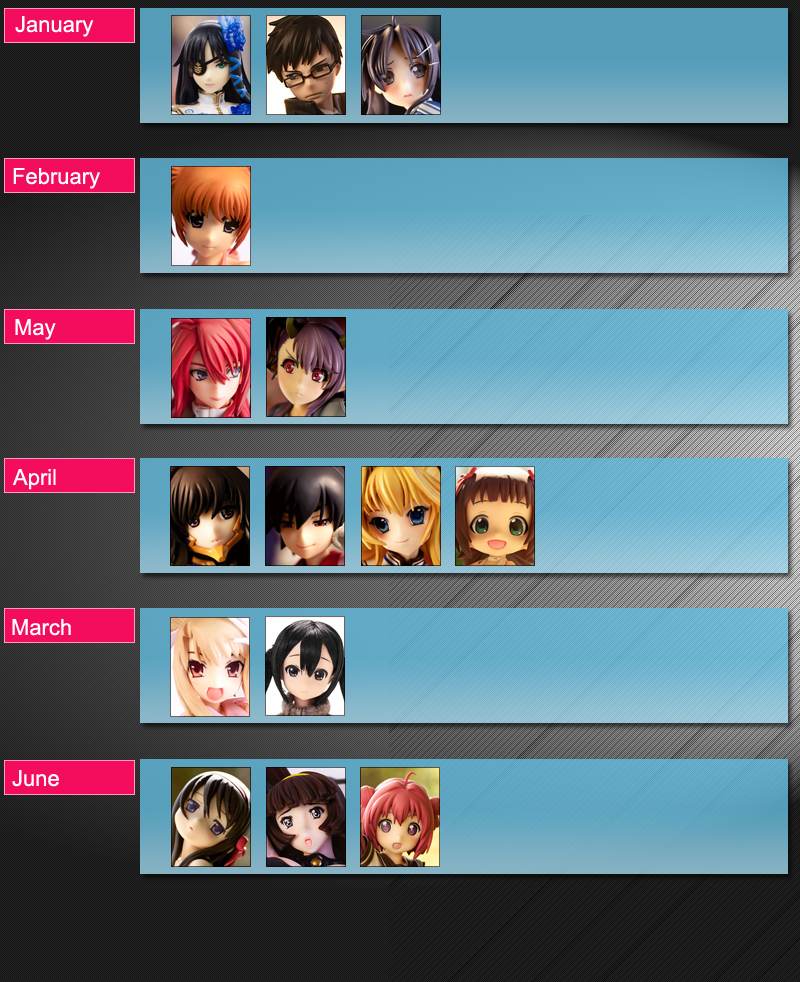 I could acquire Kanbaru Suruga, as she was released I had the wishful idea that she would hit the bargin bin, how idiotic of me. In 2013 I got her unopened and she is better than expected.

In the first half I experimented a bit with other things, I ordered a male bishounen figure, Yukio Okumura looks very cool, but next to my cute girls he looks somewhat odd. The Cu Poche of Haruka is super sweet and fun to play around, she’s actually one of the few things I received and liked from Kotobukiya this year. I also got the recast of the Sena Airi Garagekit, it arrived a little damaged, what sucked. I also bought this 1/6 scaled Azone doll of Azusa Nakano I already spoiled her with a load of clothes , it’s totally fun to dress her up and she is really adorable. 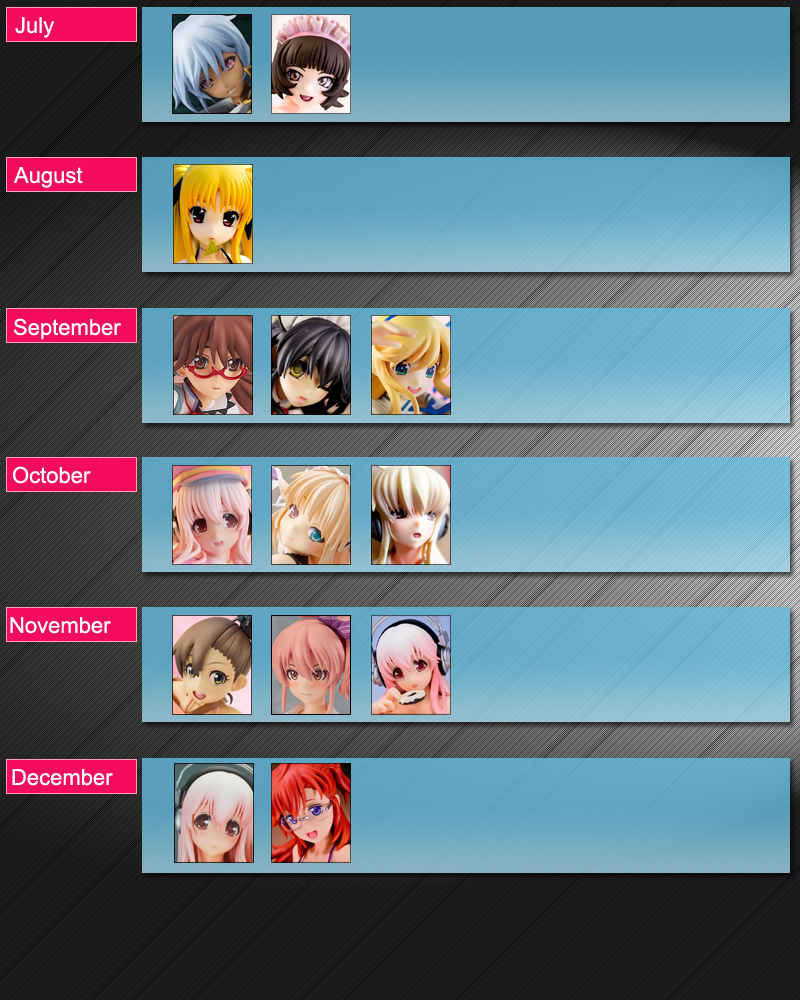 When looking back I made some unnecessary purchases in the second half, Miyuki Mana is rather boring even though she’s a bespeckled beauty, Kobato made me ultra furious I should have never ordered her, the Jougasaki Mika figma turned out so small, that I put it right back in the box. Some of the more satisfying additions to my collection influenced by the reviews of fellow bloggers, thx to Tier I got the 1/4 figure of loli Fate, she’s enchanting. Without Bakayaro I had probably missed Kotobukiya’s Takatsuki Ichika, a really nice bikini girl with happy boobs.

Chouhi Ekitoku aside from being far off the 1/7 scale, turned out nice with her cute butt, Cat Lap Milk was also a good and rewarding purchase. The little test of the affordable prize figures was fun, the Sonico – Space Police is a lot of fun, the The Sonico – Sweets Time also turned out surprisingly good as well. The most ecchi figure was Yuki, but she looked just too good to pass, a cute face with a hot body. Inaba Rinne was another satisfying purchase, this darling comes with many parts and makes me smile. The best thing was reserved for December, the 1/5 scaled Sonico PKG version, she’s awesome and one of the best Sonico figures ever.

These delays were so unpleasant, especially Tharja is something I really wanted in December. 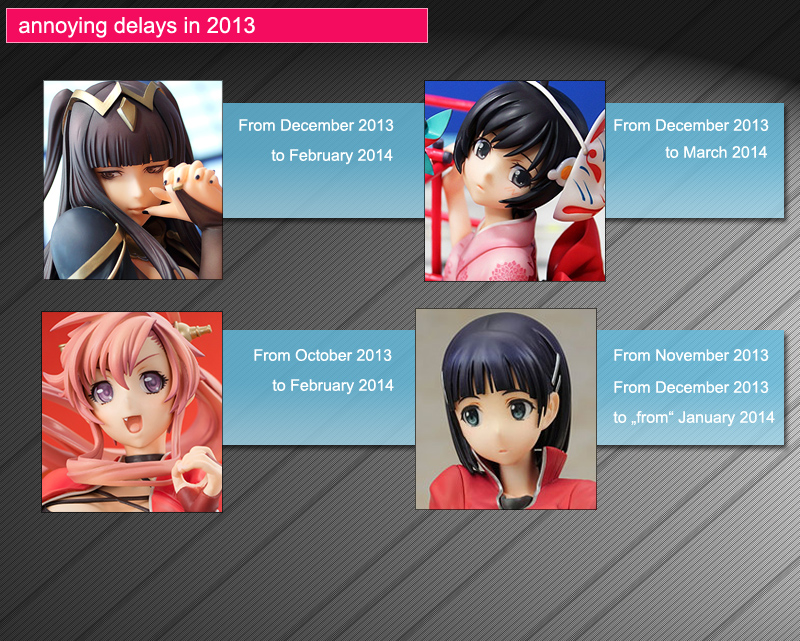 Detailed expenses in each month

No month without figure in 2013,  January and April were rather sick with over 30.000 Yen each 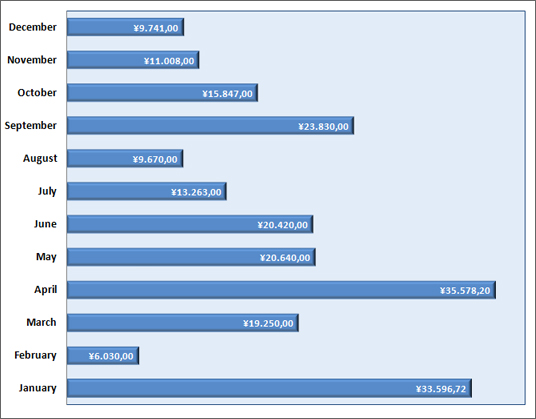 Comparison of detailed expenses in each month between 2012 and 2013

In 2013 it were less extreme cycle skips 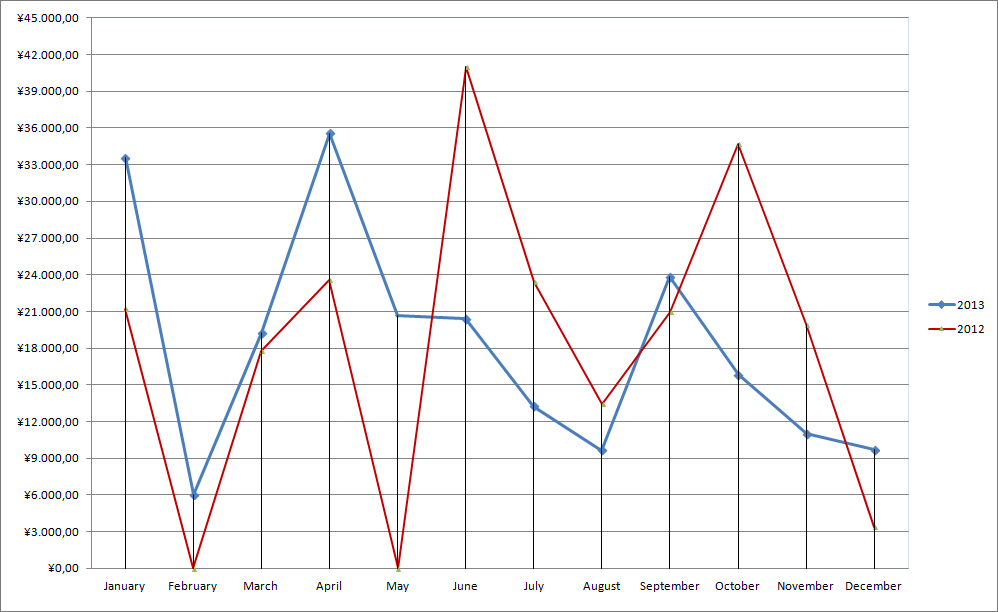 With four figures Orchid Seed was in the lead in 2013, followed by Kotobukiya, Megahouse, Native, Phat Company and Max Factory, the rest was divided by single purchases. Last time in 2012  I did most purchases with ALTER, but since they do more delaying than releasing I only received Yuri Yuri – Akari in 2013.

No diagram necessary with little exception I ordered everything at AmiAmi, they offer Airmal and very reliable service. Oh and I want to boost my points, as well.

With the super cheap Yen, I didn’t bother to order much from Germany, I only bought Yoshii Hotori. EMS was chosen very often in 2013, which takes around 7 days average. After my positive experience with Airmail 1 – 3 weeks on average, I used it more regulary, it’s cheaper than EMS and faster than SAL. I use SAL for not so urgents orders 4 weeks average waiting time. 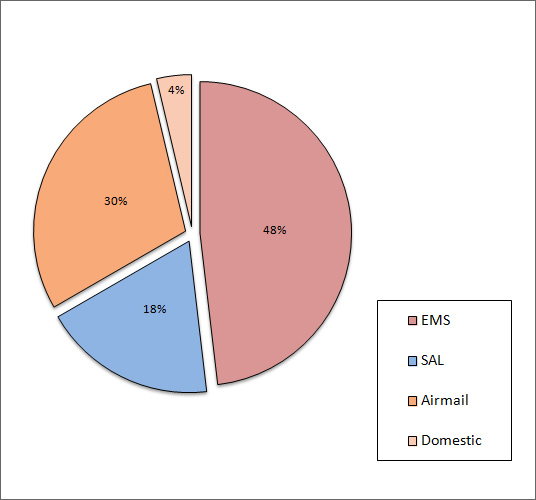 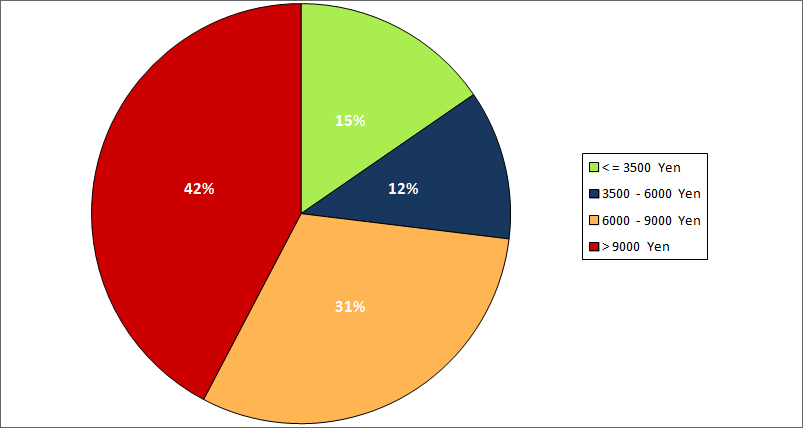 Only a few changes compared to last year, the good thing is that I was less often charged with custom fees, but I paid more for shipping a difference of around 16000 Yen. 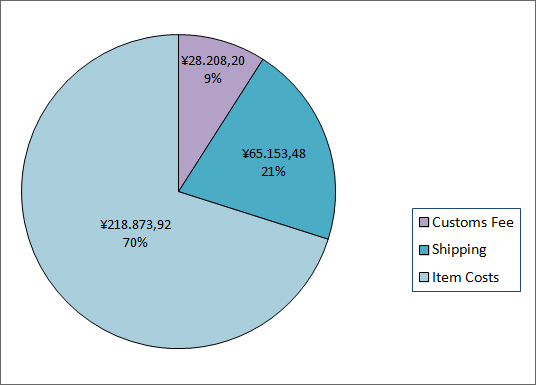 Well, that was another year full of figures, in 2012 I received 27, 2013  I received 28 + 1 present. You could say the 4 delays saved my ass in 2013, I feel a bit bad for such little restraint and that I filled a lot of shelfspace like that. The mistake I made was that I ordered many figures because I found them interesting and not always because they were something I really needed in the first place. I also feel that there were more really beautiful figures in 2012. Anyway, receiving 3 or 4 figures in one month is something I’ll try to prevent in this year.

See you again when we talk about the numbers of the figure year 2014 with hopefully more appealing figures, less delays and less regretable purchases.