Figure review time, today my guest will be a pretty, young lady, Araragi Tsukihi, the sister of my highly admired hero from the Bakemonogatari universe. To be precisely, her origin is Nisemonogatari, where on arc was dedicated to her.

GSC’s Bakemonogatari line has been a story of success, they made distinctive and elaborate figures,  based on the Blu Ray or DVD covers of Bakemonogatari and Nisemonogatari.

So far I only had bought 2 of these figures, I picked the figures I liked the most, based on visual appeal and character preference, Shinobu and Kanbaru. A recent addition was the figure I’ll review today. It’s about time that they make a good figure of Koyomi.

Tsukihi was released on the 7th of April this year, the figure is scaled 1/8 with an overall height of 23 mm. She was sculpted by Hiroshi who made a number of figures with a distinctive look.
GSC also offered a second color variant of her that featured the look from the anime with different colors and pattern. I prefered her in pink so I received this copy a few days ago. 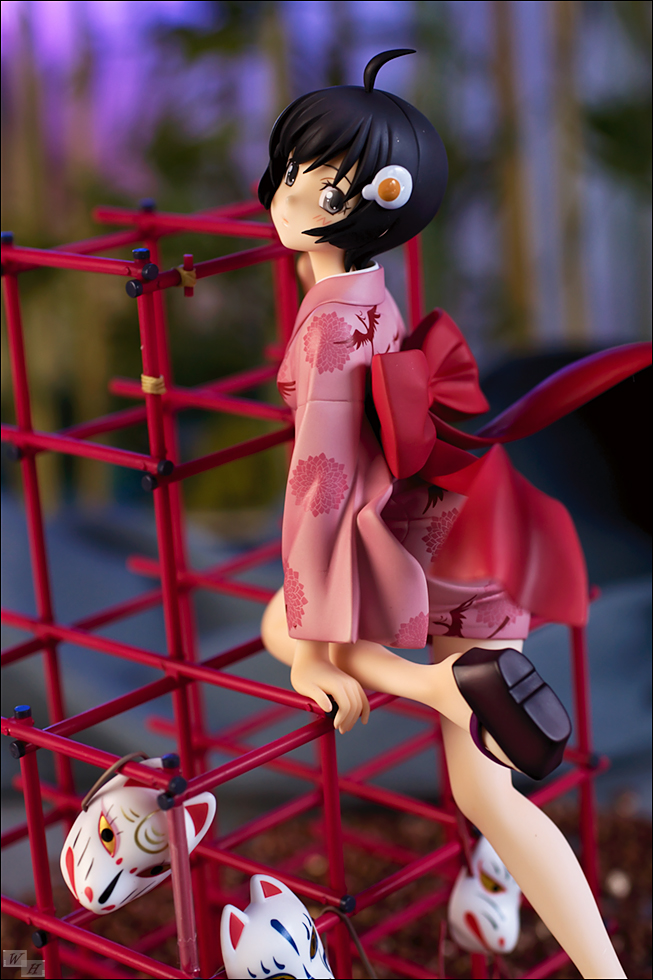 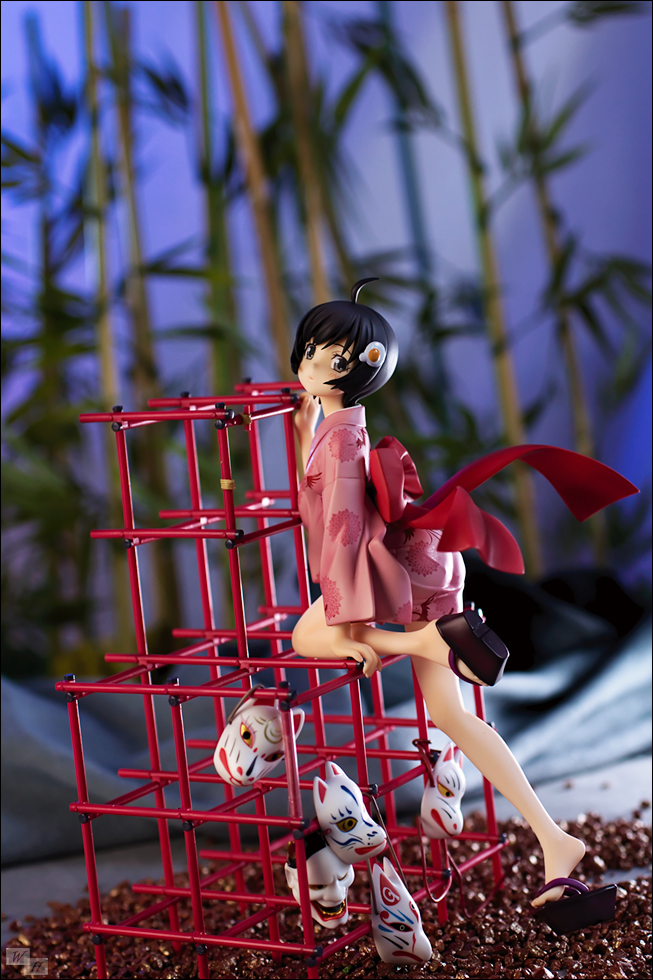 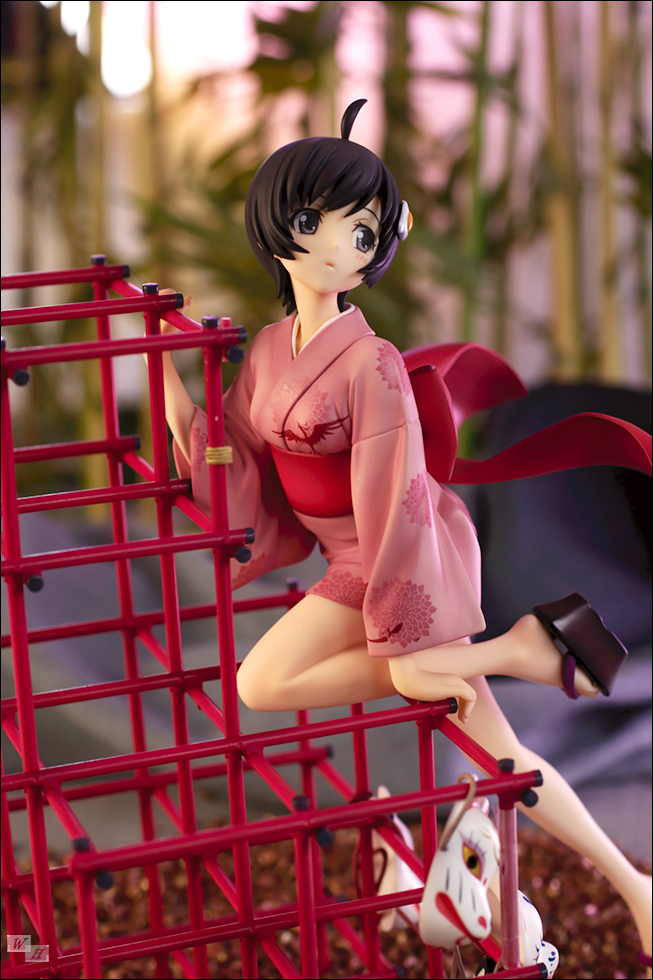 What first meets the eye is the pipe construction, the base of this figure. It is a perfect model of pipe framework for kids, Americans call it jungle gym, everything was already assembled and looks quite clean. Everything follows the theme of the so popular summer festivals in Japan, the pipes are equipped with different fox mask and also one demon is hanging down.

The figure of Araragi Tsukihi is a real eyecatcher, not only because of the base, the figure is eceptionally well done and everything together creates a certain, convincing atmosphere. 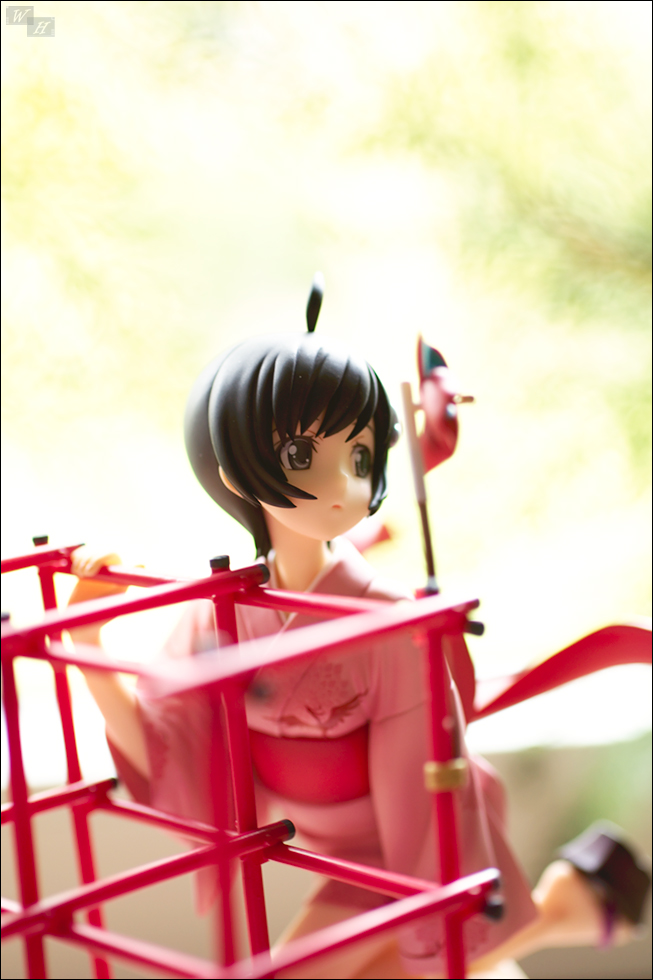 In the anime Tsukihi changes her hairstyle in a very regular manner, this figure presents her with a pretty bob, in my humble opinion it suits her the best. Her hair is black and shows nicely sharp yet rounded strands. As member of the Araragi family she has an ahoge.
At the backside the hair is really round, she looks a bit like Kafuka from Zetsubo Sensei.

As decoration for her hair, she has a sunny side up egg, which looks surprisingly fitting at the side of her head, when desired there is the option for it to be exchanged with a fox mask.

I’m in love with her innocent expression, Tsukihi has such a beautiful shaped face with great details, such as blush marks, a cute stubs nose and a small mouth. The depth of her eyes is incredible with this spot of reflection the level of detail is simply amazing. There is a little sadness in her eyes, a feel of thoughtful sadness, it gives her a lot of personality and appeal. 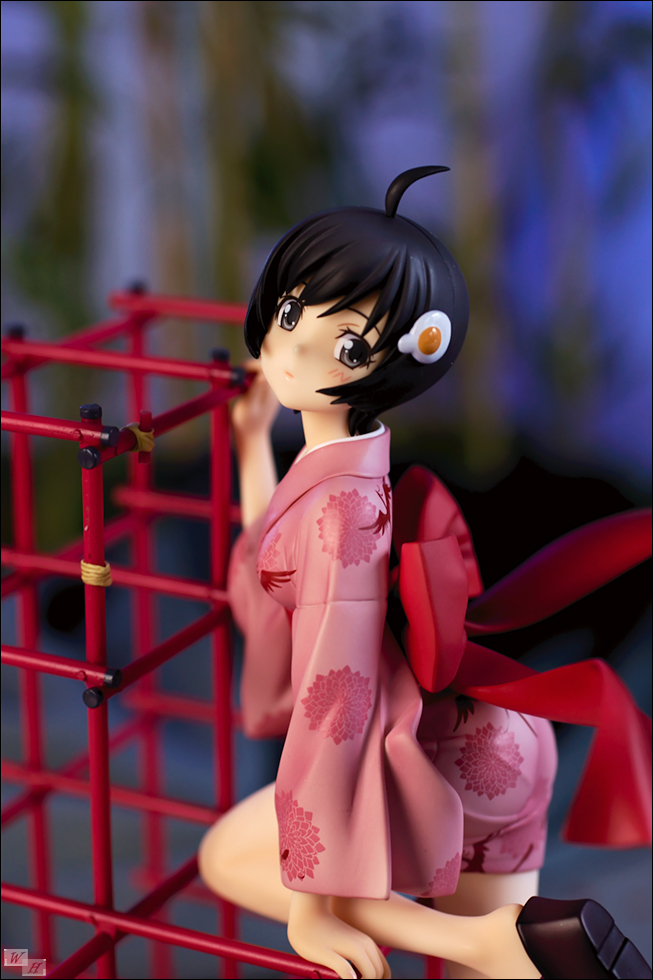 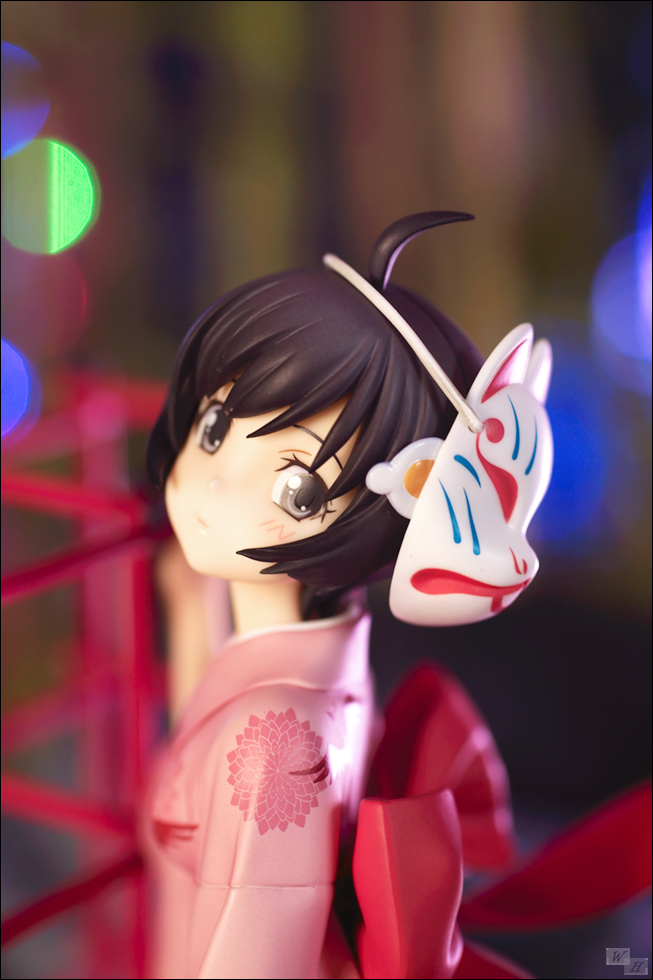 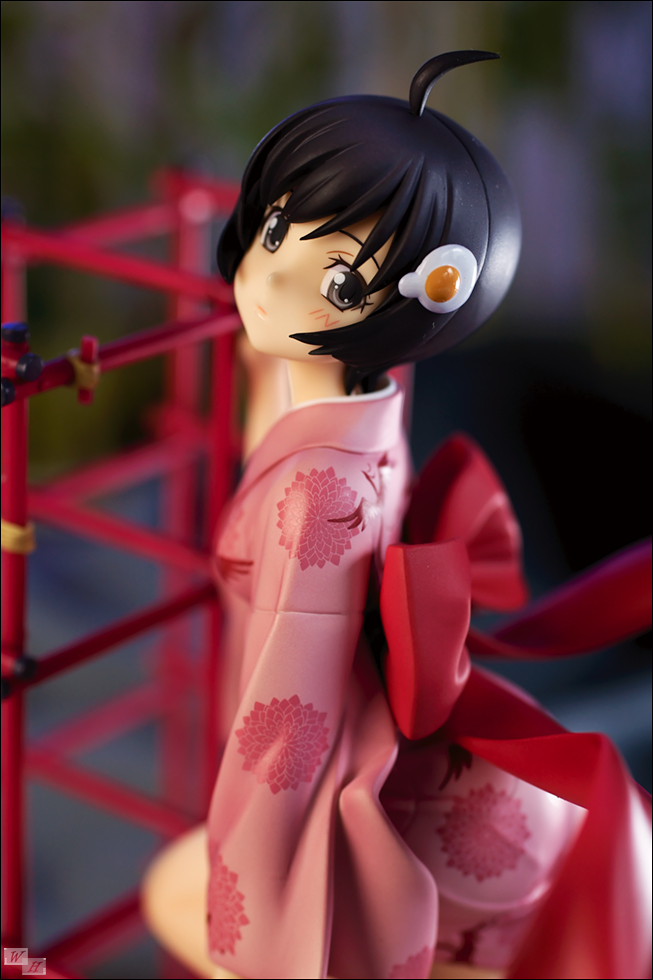 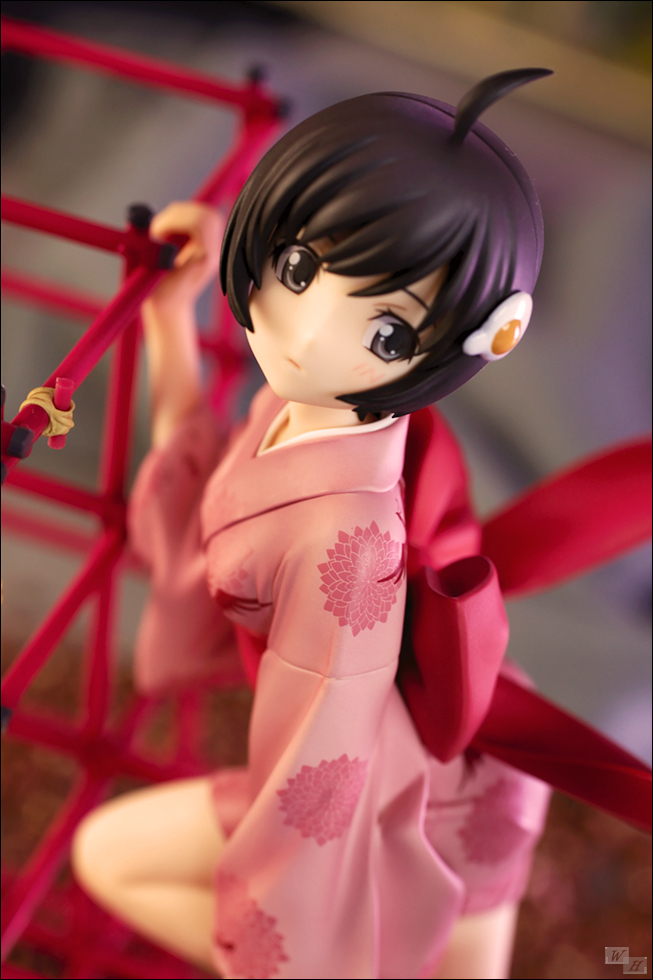 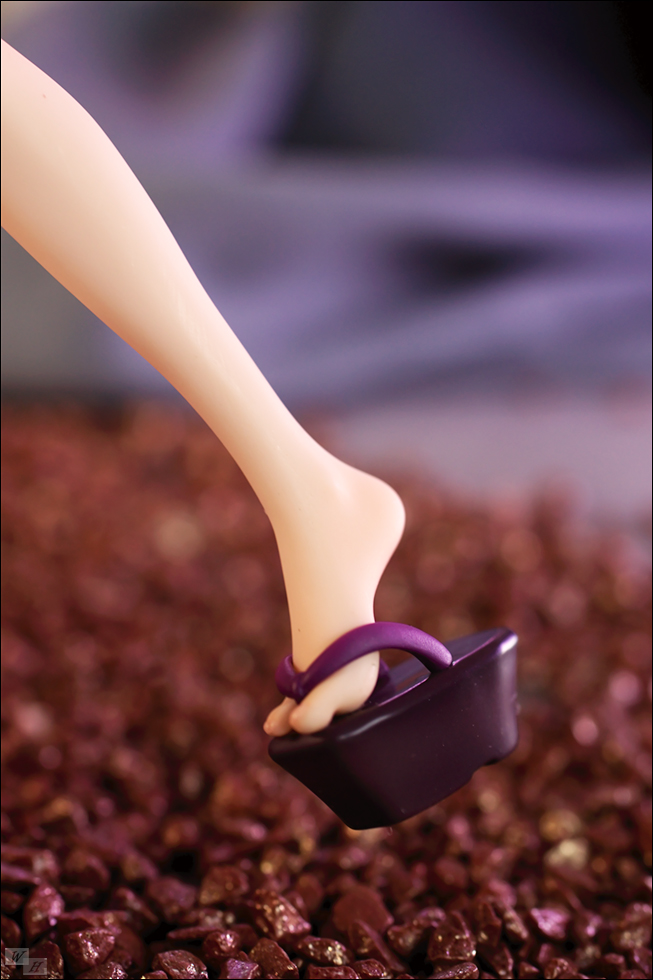 Putting her short temper aside, Tsukihi is a somewhat traditional person and appears very  feminine in a pure sense, especially in comparison with her boar like sister, Karen. She is always wearing these Japanese clothes from a period long ago. The Yukata is crafted carefully with all the convincing details like inlays, wrinkles or the wide sleeves or the big obi that ends in a huge red ribbon. Who can tell the differences between a Yukata and a Kimono?

The Yukata here is colored in a nice bright pink color with a flower ornament pattern printed on it, on some areas a red Phoenix and some feathers can also been seen. This particular dress is a bit short to do climbing exercises. A character like her doesn’t need to look sexy. Compared to Bakemonogatari, Nisemonogatari still has smart dialog, but is quite heavy on the fanservice side involving the younger girls. So of course Tsukihi is ought shows at least a bit of her legs and how her dress tightly wraps around her butt, magnificent sculptwork.

The sculpting of the figures body is done very well, starting from the articulation, to the body who is still in development with the long slender legs this figure is convincing, even her toes are nice and look lively. These are some high soles under her feet.

Tsukihi is an enchanting, beautiful girl who would make every teenage boy happy, my fancy regarding female anime characters goes more into the direction of Hanekawa san. 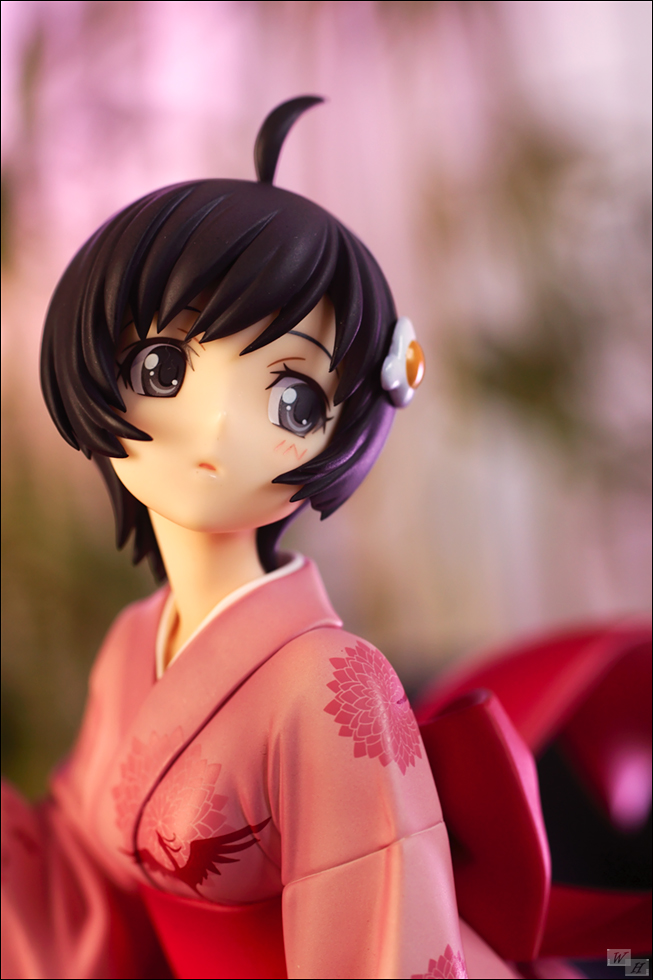 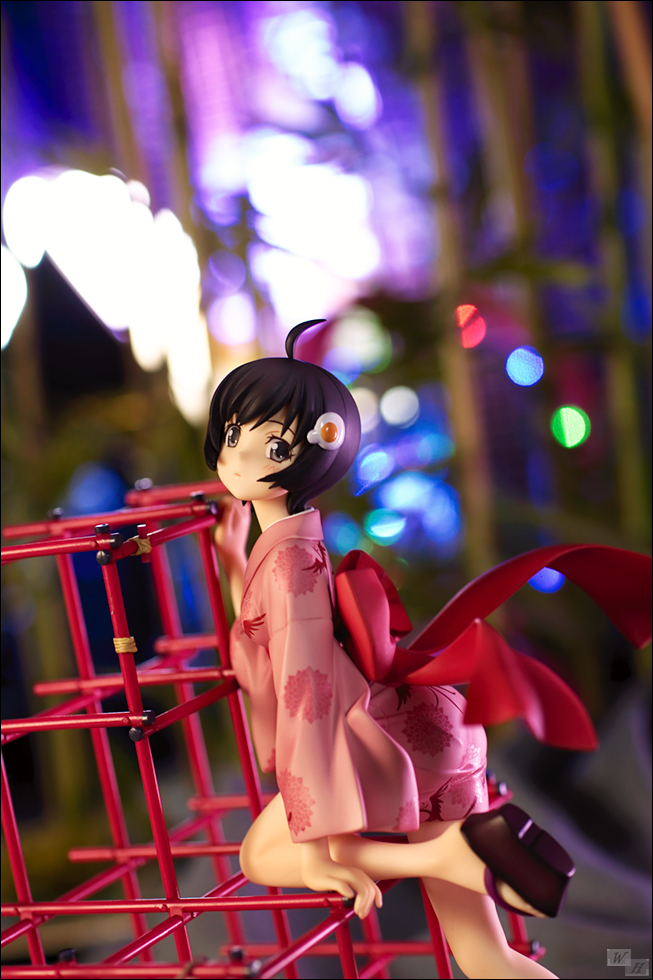 Putting her on the base is rather simple, Tsukihi grabs onto one of the upper pipes , the other hand has a little dent, where one of the upward pointing pipes slides in. The pulled up leg also helps with balancing the figure. GSC provided a little support for one foot for additional safety, but it works without it, even bumping against the desk won’t make her fall.

The pipe framework would be able to stand on it’s own, but for a more complete look, a floor base in the shape of a sunny side up egg, has been provided, unfortunately it is just plain white. It appears like a last minute idea, a more elaborate texture on it would be better.

However, you don’t have to use it and it won’t make the figure look bad in any way. 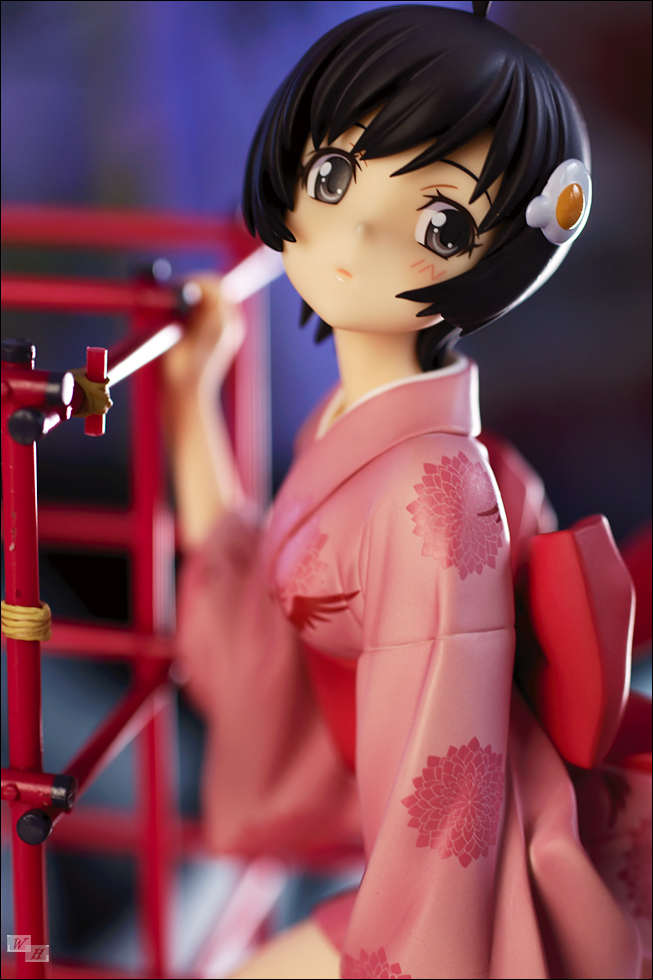 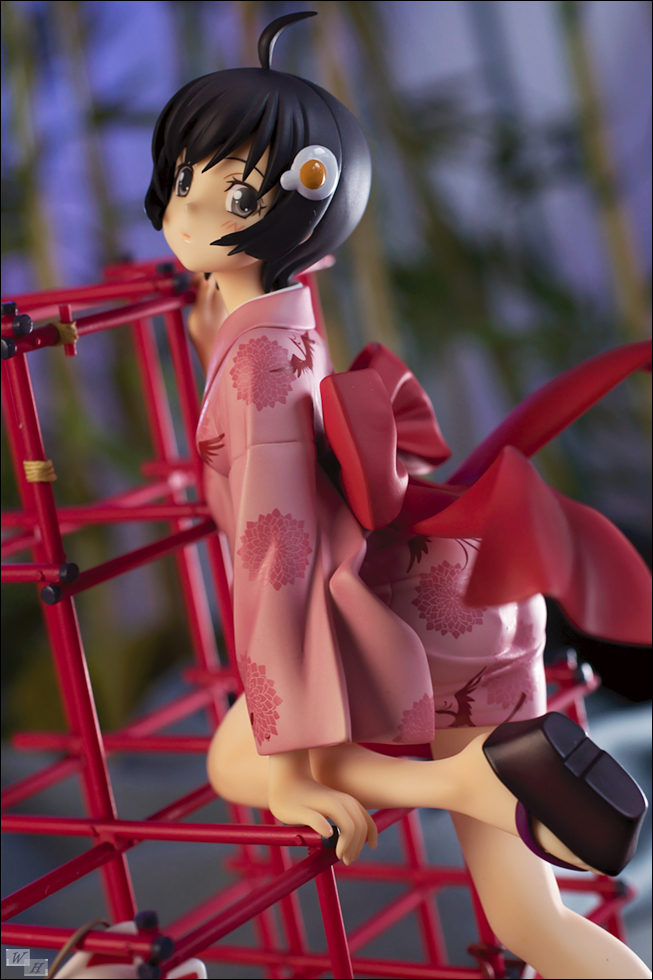 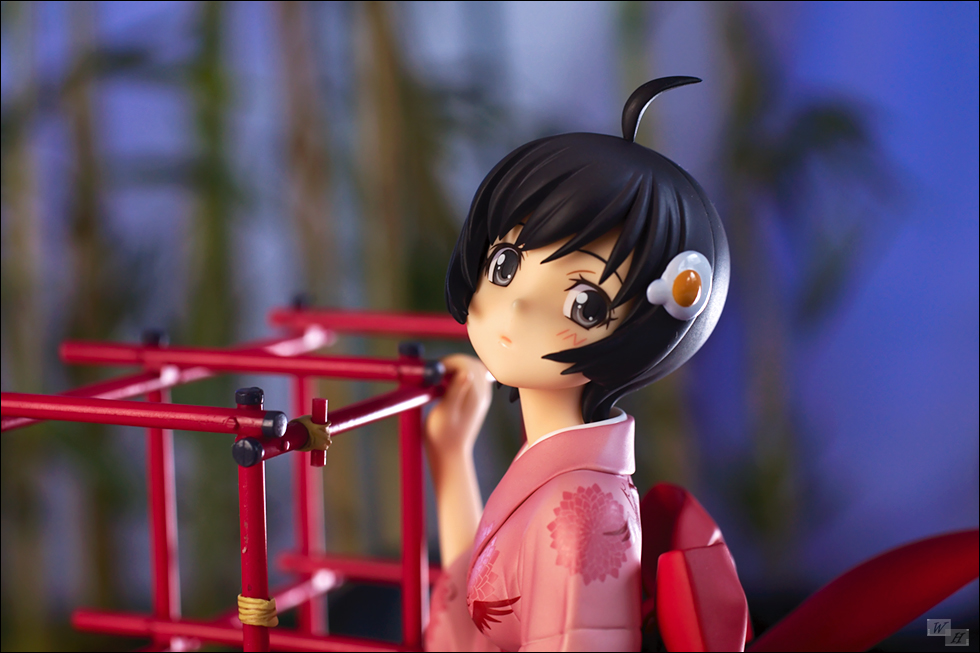 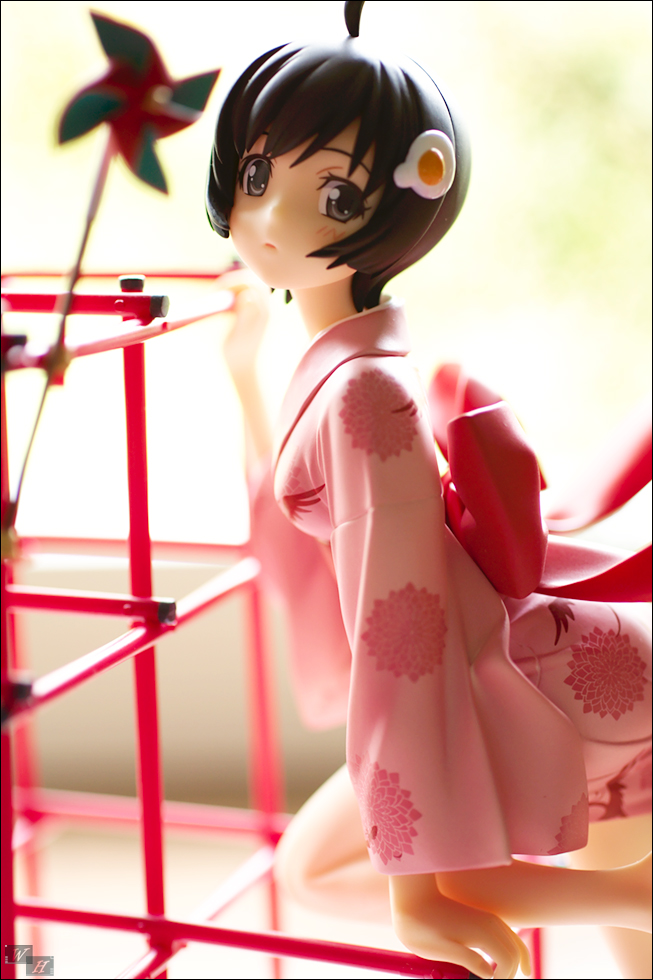 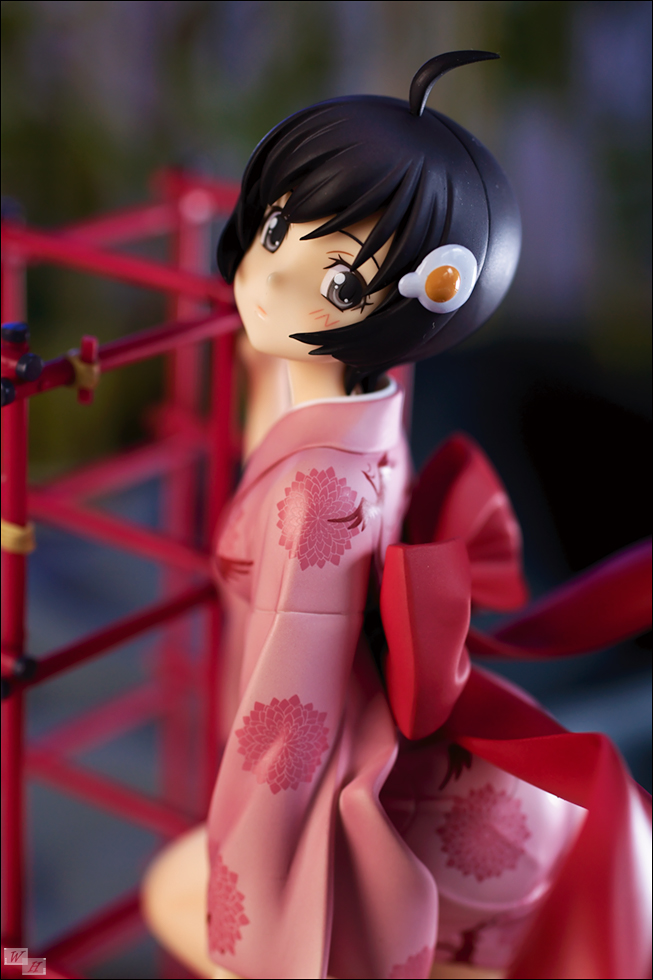 “write slave, write!” So lets wrap this up now. Tsukihi is an amazing figure, she shows an interesting pose and has a beautiful outfit. My favorite part about the figure is the detailed face, it is beautiful and has a strong expression that shows personality. Also a cool base is another convincing part of Good Smile Company’s Araragi Tsukihi.

Overall it is an awesome, high quality figure ^^

Another review is availabe at Reflective Boundary and Hobby Holic

Another amazing figure that I received in the first months of this year, 2014 has been really great in terms of figures. Numbers don’t mean much, but this is my current Top 4 ranking.

Next time I’ll probably review Alleyne or a crazy Idol. 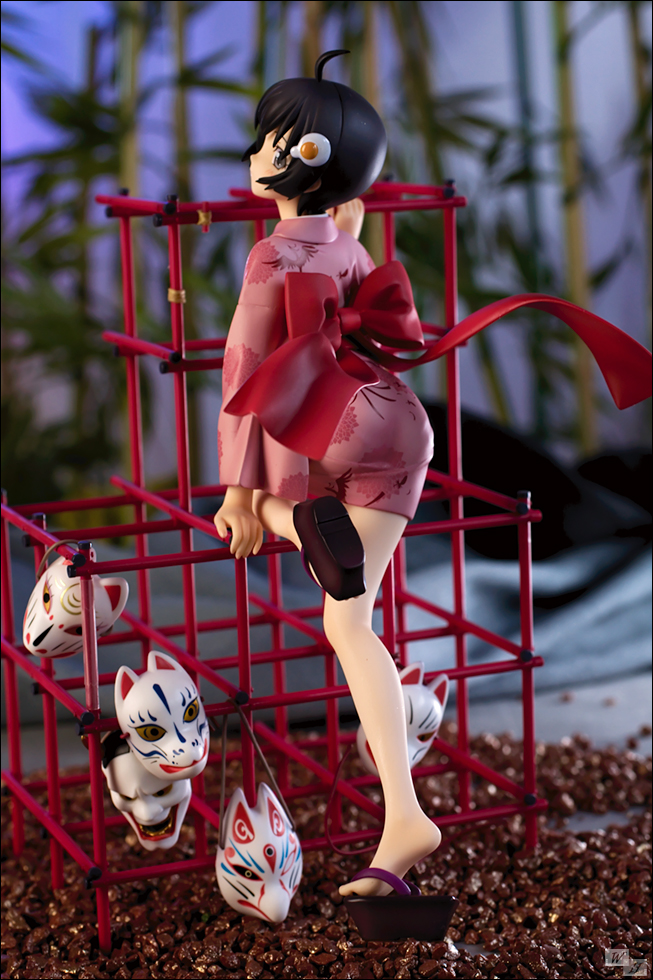 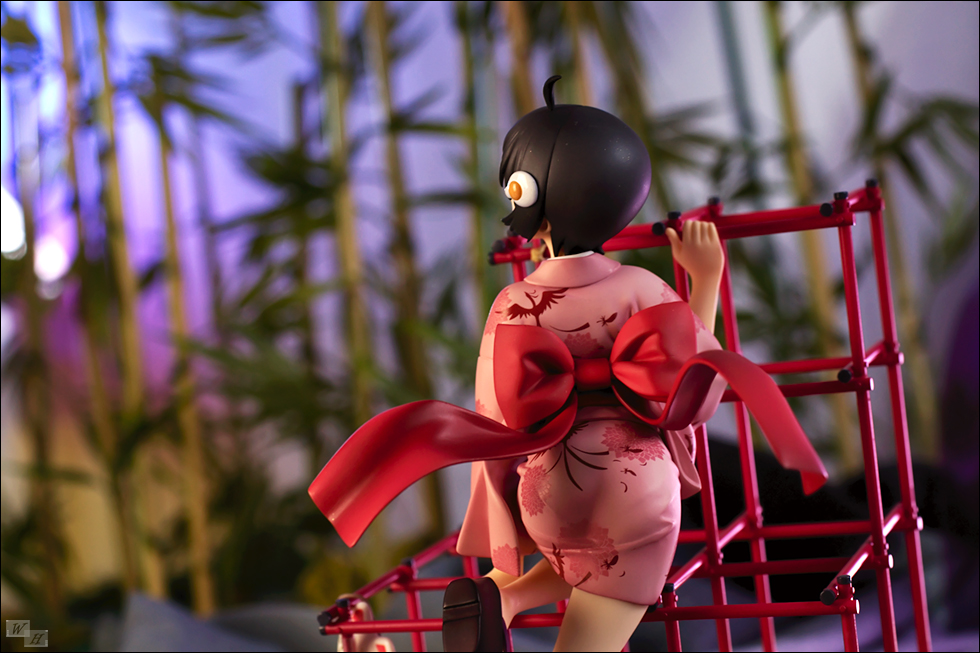 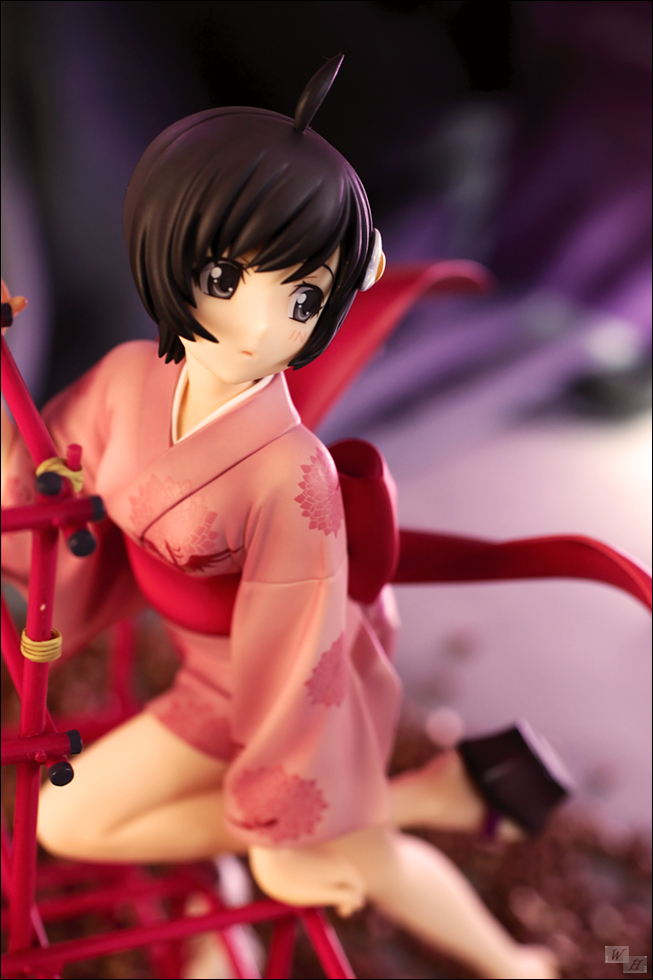 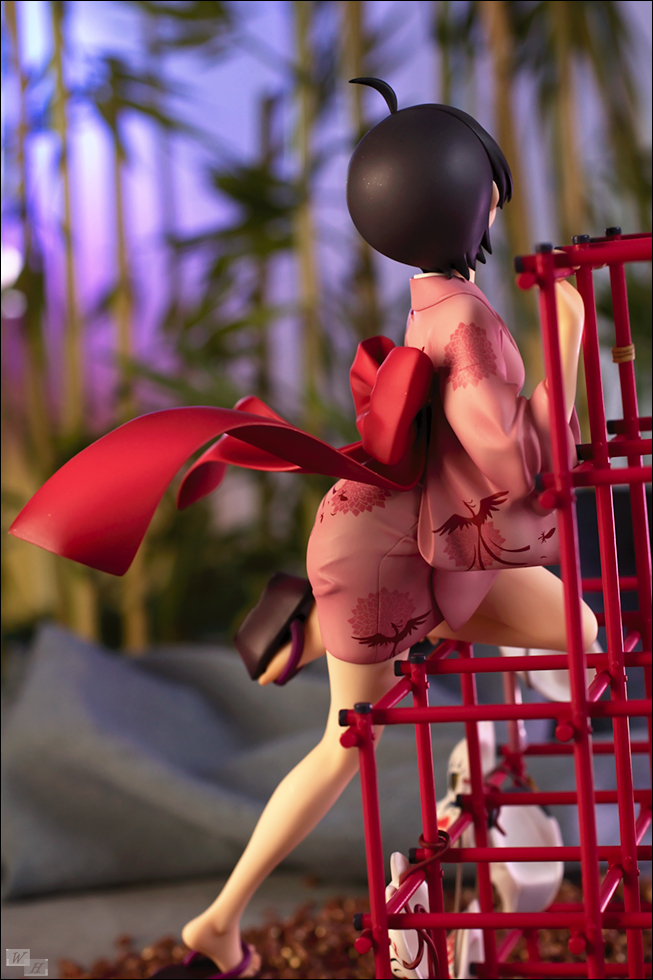 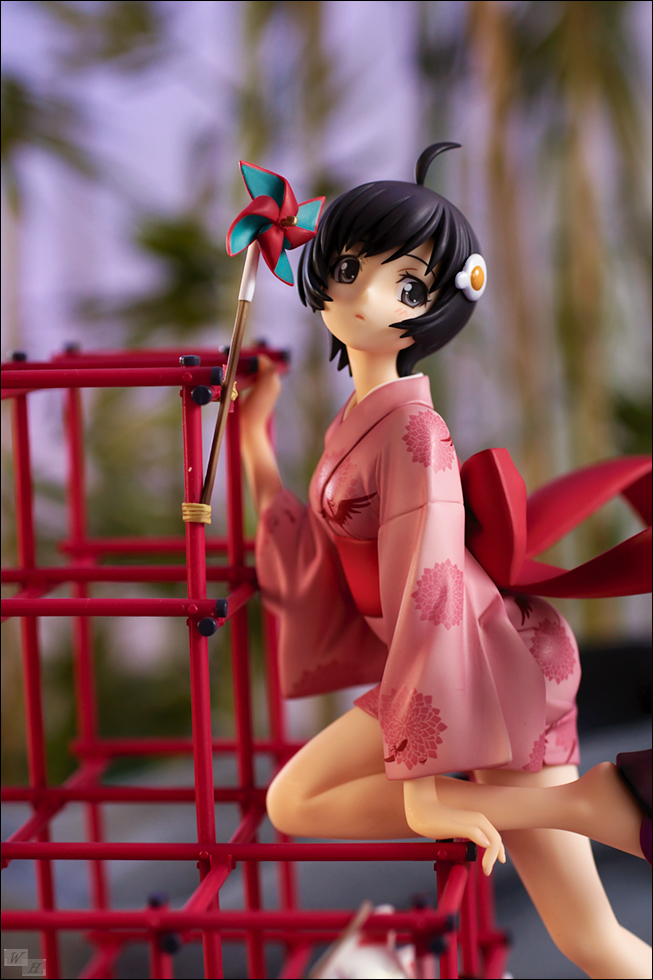 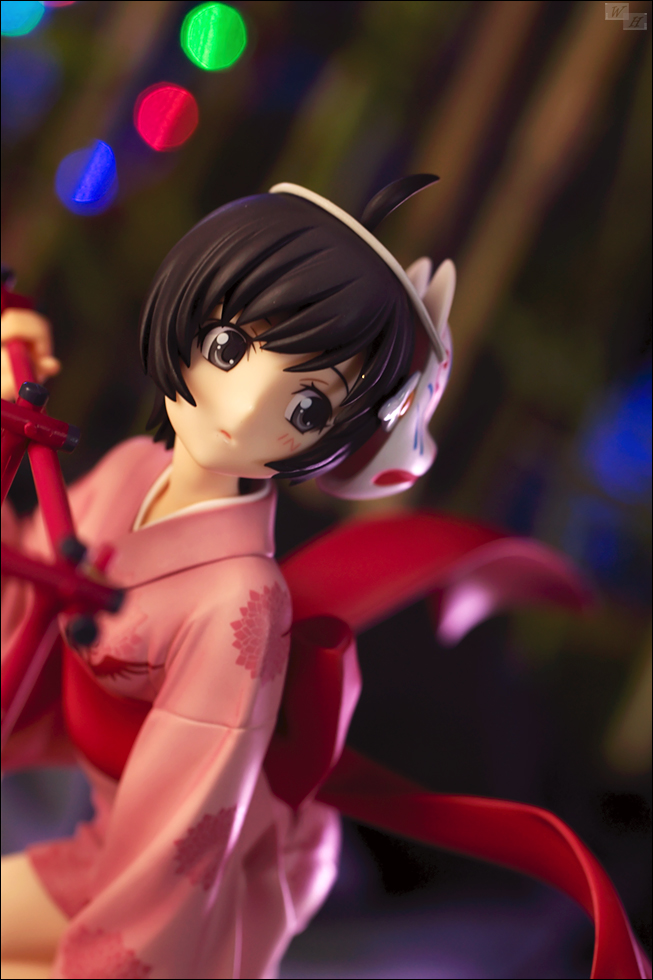 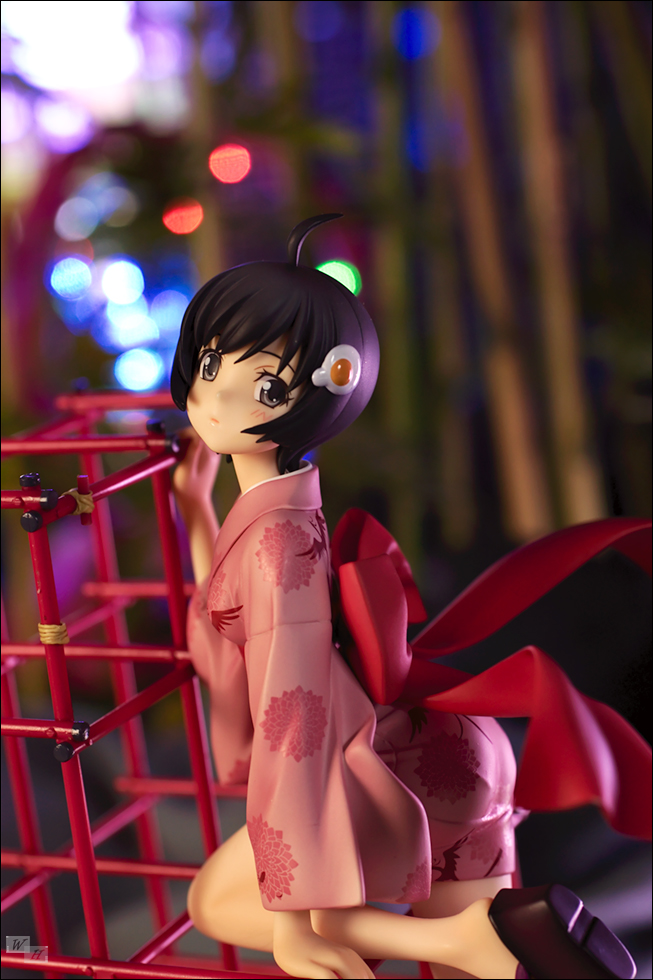 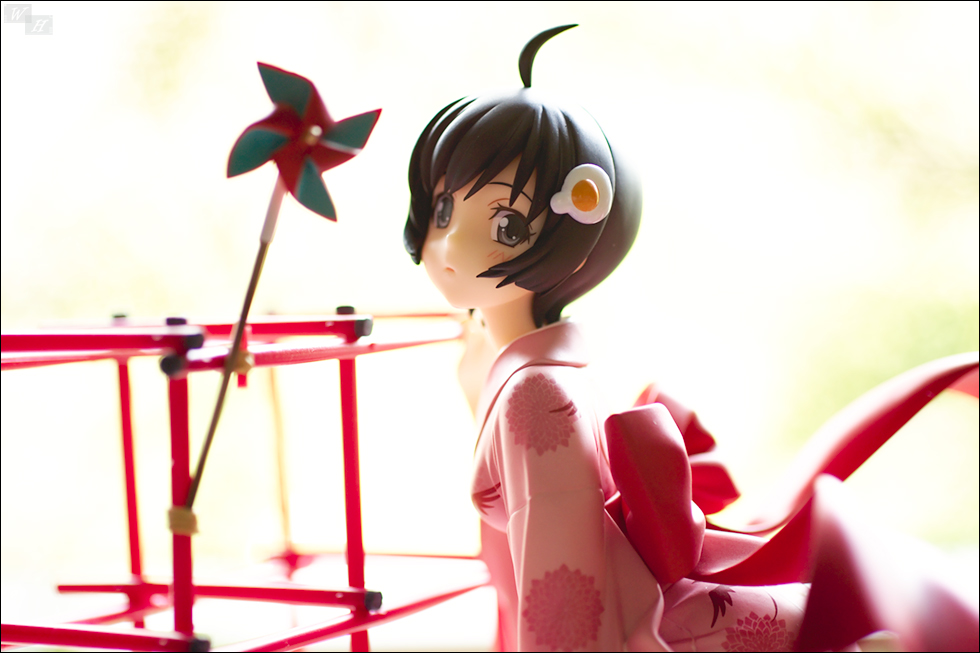 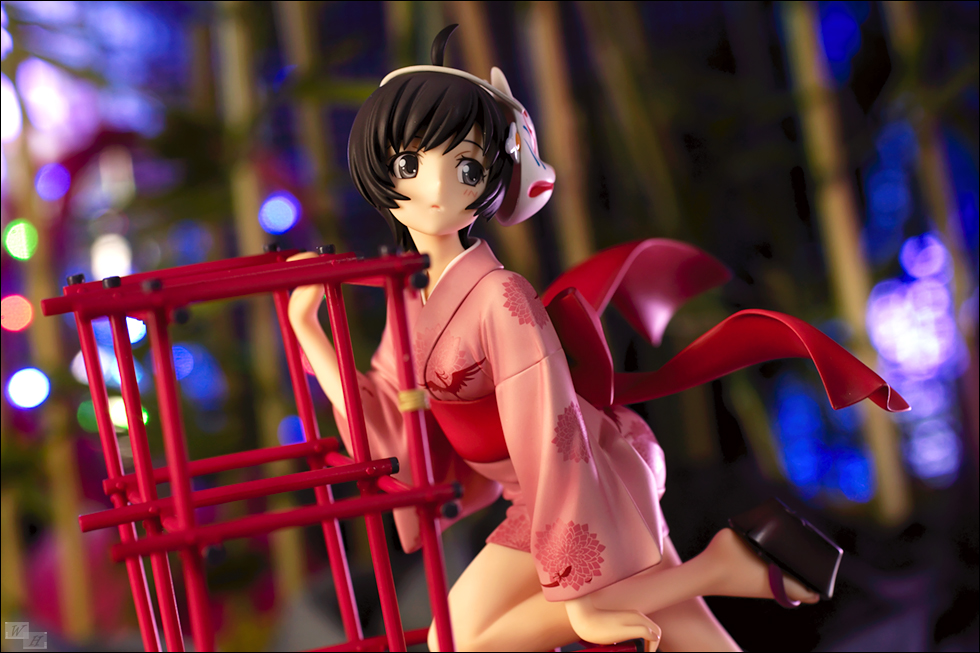 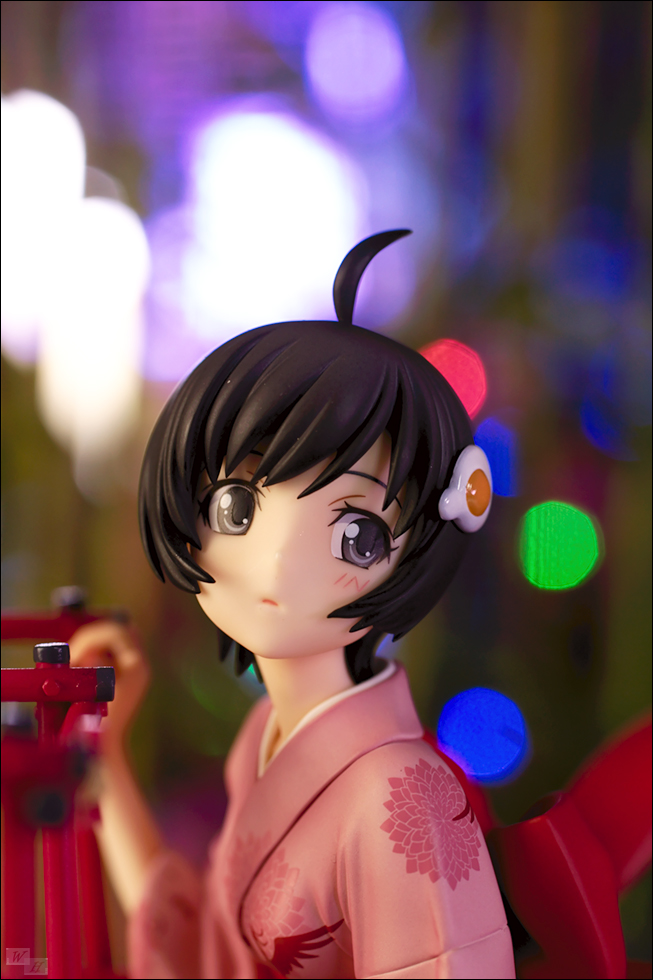