Yowamushi Pedal (The Cowardly Cyclist) is a 38 episode long anime which aired from October 2013 to July 2014. It was surprise hit sports anime in this year, it was so popular that a second season has been announced for the anime autumn season . That popularity is no hype, it’s success is well deserved, I’m writing this post to tell you more about it’s qualities.

This show is all about cycling, I didn’t have the best opinion about it, but I picked this show nevertheless. The professional bicycle sport suffered badly, after former stars confessed that they were using illegal substances to increase their performance. The ambitious amateur scene is in focus of the anime, when looking back the anime changed my opinion a bit to the better.

The story centers around Onoda Sakamichi, a shy, meek boy with a small body and no real talents on first sight, who is enrolling into a new highschool. As anime otaku he wants to join the anime club. So far his only connection with bycicle sport were his regular rides to Akihabara which is 45 kilometers away from his home. His bike is a so called granny bike with basket and a wrong gear transmission, yet Onoda manages to climb the hill up and down with ease.

In the first arc Onoda meets Shunsuke Imaizumi, who is quite obsessed with cycling, he gets curious about Onoda’s way of riding up the slope with his crappy bike and challenges him to a race, later Onoda meets Naruko, a pushy character who easily manages to befriend with Onoda after they met during a trip to Akihabara. These little events help with pulling Onoda out of his rather lonely shell and he really starts to enjoy the physical exercises during riding his bike.

Steady progress is an substantial aspect of Yowamushi Pedal, Onoda who is a real klutz at first takes small steps in becoming a competitive cyclist, a way full hardships and challenges for himself. It’s true that sport makes you more self confident and believe in your own abilities, slow but at a steady pace Onoda gets stronger, mentally and physically. 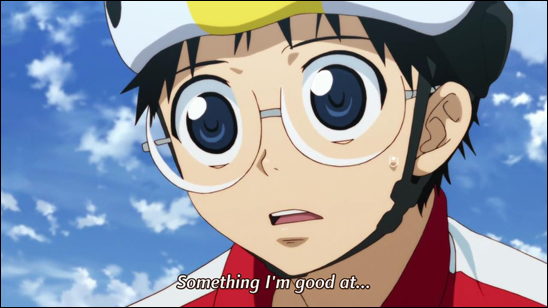 Onoda and his new friends Imaizumi and Naruko, join the bicycle racing club, known as team Souhoku. The senior members have strong personalities and presence, they won’t go easy on the new members, but actually care about getting them motivated and in shape.

The characters and their relationships are one of the strong points of Yowamushi Pedal. They are especially well done with unique personalities, In 38 episodes  you have time to develop them in such a way and give them some back story and spotlight. There are examples of very close male friendship, among some of the team members and other team there is often a little rivalry, but mainly in a friendly manner, the guys want to compete with each other fair and square. Sport can also connect you with other people  like it is shown here in a very good way. 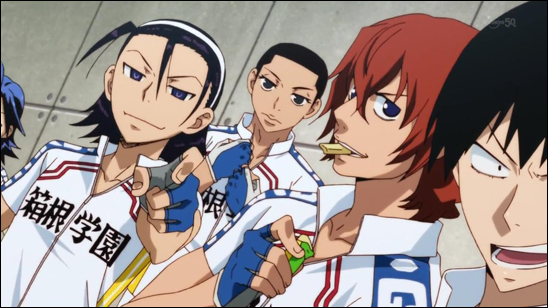 There are not many girls among the cast, there is a friendly girl, called Miki Kanzaki, but she only plays a minor role. The cast full boys, watching an anime full of bishounen is strange at first, at least for the men. I could imagine that girls would love this show, there is some light fujoshi fan fiction about it. I think Imaizumi is quite the hot bishounen, the little fangirl in me faints. Joking aside sport animes often have such a cast, it should not prevent you from enjoying the show. 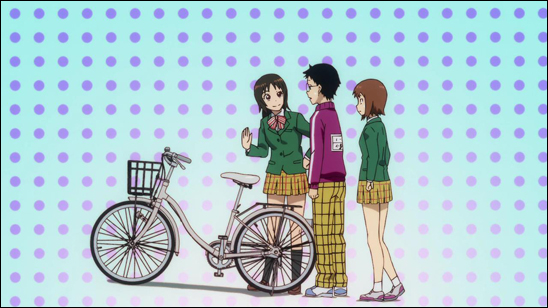 In the first few episodes Onoda’s granny bike is adjusted and tuned with small parts, these events go in hand with explanations about how a bicycle works and how they develop more performance. Of course in the later episodes Onoda gets a real road racer and click pedals.

As the story continues Onoda and the team faces more experienced opponents. Onoda is not always in the focus, it is also shown what other members have on their mind. After all the training, the team is set and prepared for the upcoming Interhigh, a big event for higschools.

The animations of characters, bikes and surrounding looks top notch for sport anime standards and creates a harmonic picture. The anime plays during summer, they always have great weather and the roads and racetracks are embraced by a nice scenery of forests, mountains and blue skies, making cycling look even more appealing.

One not so good thing in the later episodes is Midousuji,  he appears as a kind of a super villain with abnormal abilities and a creepy personality. It is really annoying so see him on screen. To make things worse, he is talking so much to mock the riders next to him. I can only wonder why they felt the urge to add such a character, who should actually belong in a mental hospital.

Yowamushi Pedal is obviously very focused on the sport, especially in the last arc they seem to pedal nonstop, but there are also a lot of funny and sideline events. Also after the Ending song there will often be a comedy slice of life scene involving the characters.

The races and “fights” are really full of action and tension when they fight about every inch, once there was an episode where just a distance of 500m turned into a 20 minute battle and it was absolutely exciting. It gives you a rush when the characters, especially Onoda try to overcome an big obstacle step by step with some dramatic struggles. 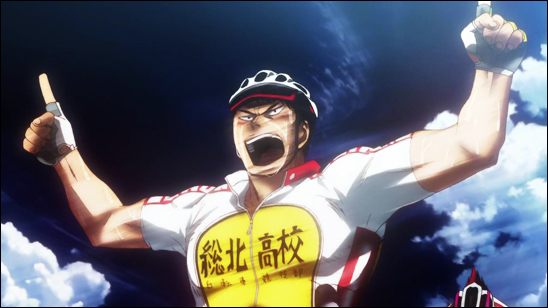 The background music has some really good pieces that underline the racing events and different moods very well. the main theme for the action scenes is nicely arranged, it covers the transformation from slow start to fast parts very well-

Most of the time the racing feels natural, near the end though  we have to witness several crazy power up moments, some things are pretty hilarious, although I liked the normal way in the first episodes more. Well, it’s no dead serious cycling simulation, it produces a bridge between sport, shounen and action genre. And I believe that is part of it’s popularity.

The music in Yowamushi Pedal is quite good a choice of powerful Opening Songs performed by ROOKiEZ is PUNK’D and Dirty Old Men capture the spirit from the show perfectly. The third opening is performed by the voice actors of team Souhoku, it lacks a bit of impact in comparison. 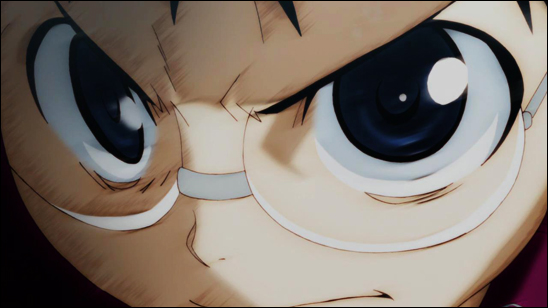 Yowamushi Pedal is not like any other sports anime, while 20+ episodes are quite common for shows of the sport genre, the elements from shounen and action anime and also Onoda’s otaku background and how he slowly improves during the show, turn it into an refreshing and entertaining ride. It is a good package with an appealing visual presentation, interesting characters and lots of exciting competition. I can’t say anything bad about the show with it’s solid pace and well planned storyline it makes no obvious flaws with the narration.

The first season has no real conclusion and ends in the middle of the Interhigh, the second season will start somewhere in October, I will watch it for sure.

I would recommend this show, not only for fans of the sport genre, you don’t even have to like cycling, it’s a very well made show. Have you already watched Yowamushi Pedal? Before I watched  this show Ookiku Furikabutte was my favorite sport anime, what is your favorite anime from this genre?