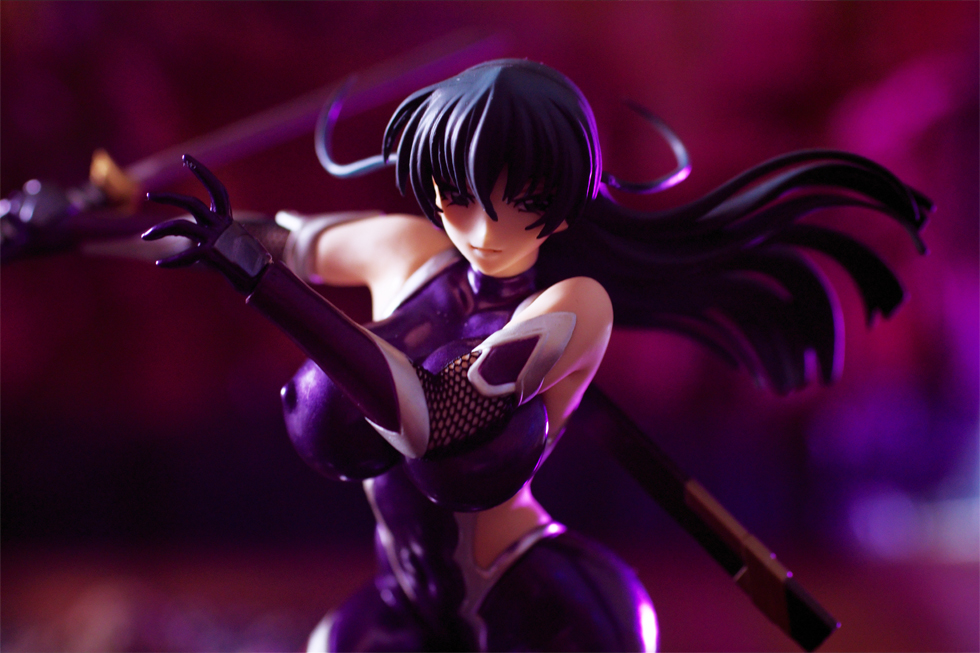 I sometimes do, I actually prefer the friendlier settings with nice animation quality and some comedy moments, although the darker titles can be more interesting, when they have a true storyline and not only a lame excuse of an intro for abusing cute anime women, but that’s quite rare. In order to be able to write a bit more about Igawa Asagi, I watched the three Taimanin Asagi OVA’s, not entirely something I enjoyed… at least it had a decent ending.

Putting the background aside, Asagi is a really popular character created by studio Lilith. There have been two figures of her, one 1/6 scaled from 2009 in a white and normal version and a 1/8 scaled one from 2014, which was released recently. She will be reviewed today. 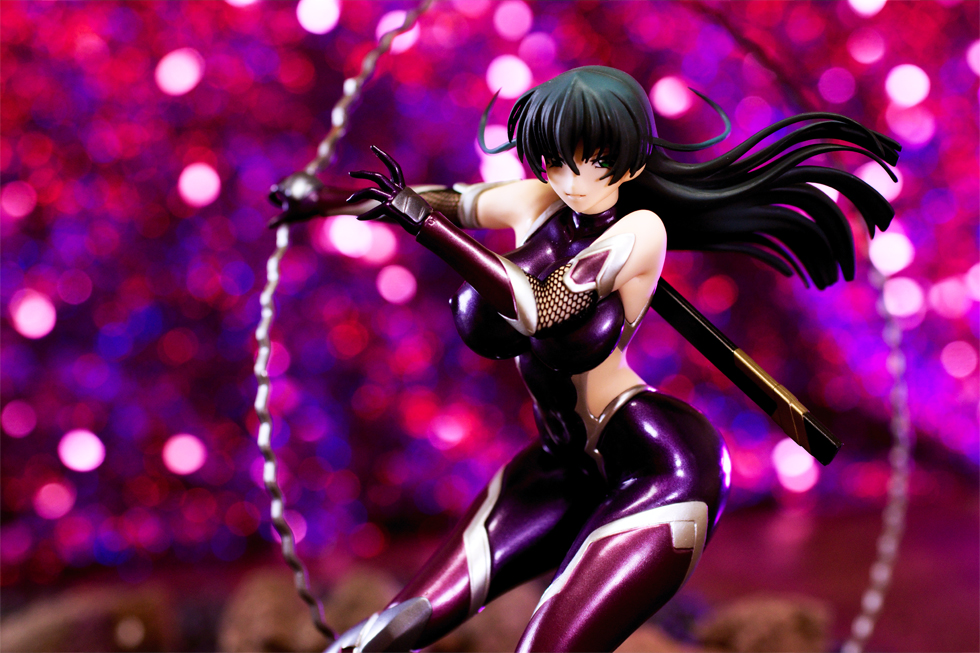 Asagi Igawa was released at the end of October and manufactured by Milestone. Milestone is a wholesaler of figures and other anime goods, most of their own figures are collaborations.The figure is scaled 1/8 and has a height of around 17 cm, she was delivered in a space saving pretty box, inside is the shapely figure of Lady Asagi, a rock debris base and a fancy sword.

I was joyously expecting the release of this figure, although I have preordered her rather late. 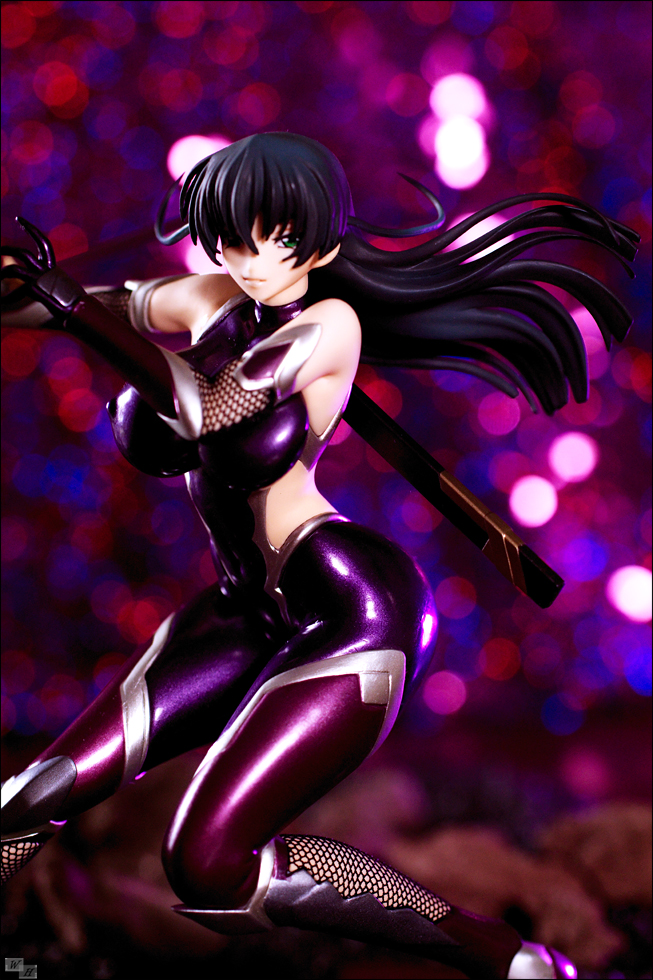 There were several things I liked about her, like the purple suit or the facial expression, I love slanted eyes combined with an adventurous, confident smile. The promo pictures were actually excellent, compared to what we usually see from other companies, like Alphamax, their figures are really nice, but the promotional pictures somehow never show it that well. 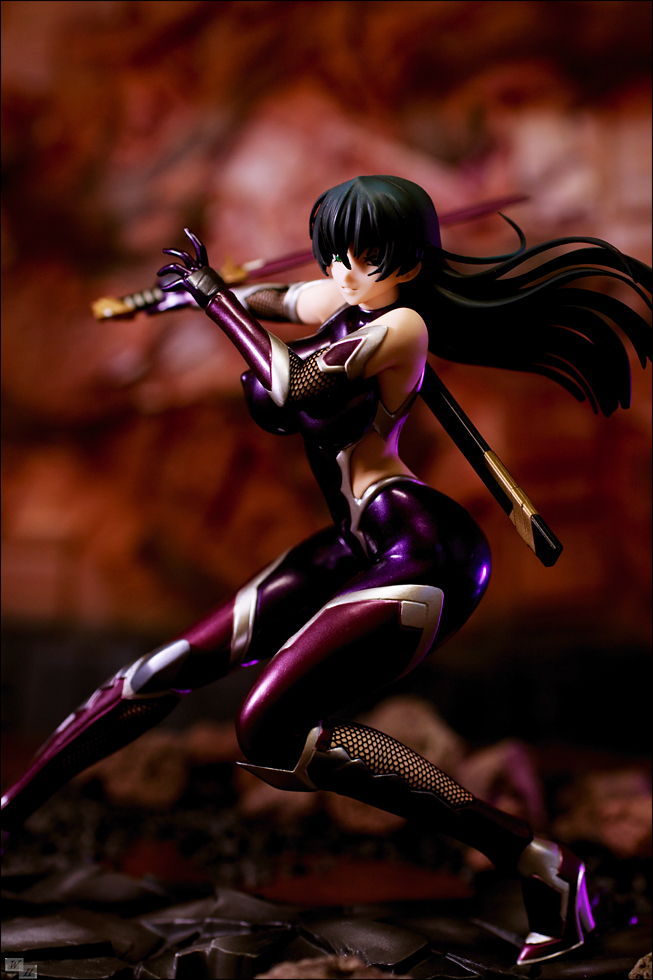 Asagi is a shapely woman with a sturdy build, one part about her is quite prominent, her large breasts, I guess she is the most stacked girl in my collection so far. Her proportions appear not really suited for combat, but Asagi is a very skilled ninja, the character design is distinctive with accentuated curves where it matters in the ecchi industry and a sexy facial expression. 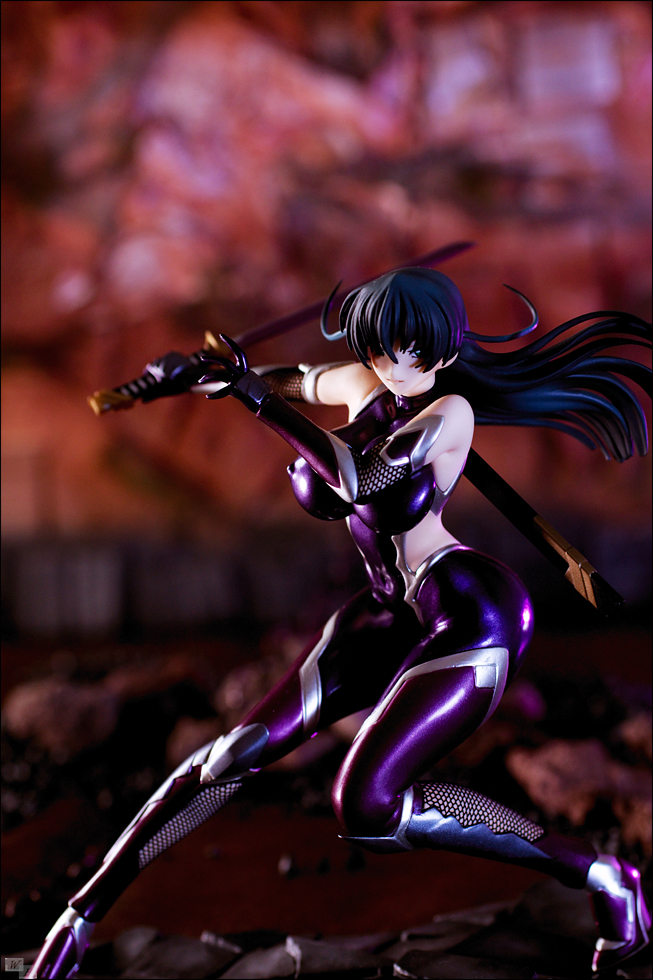 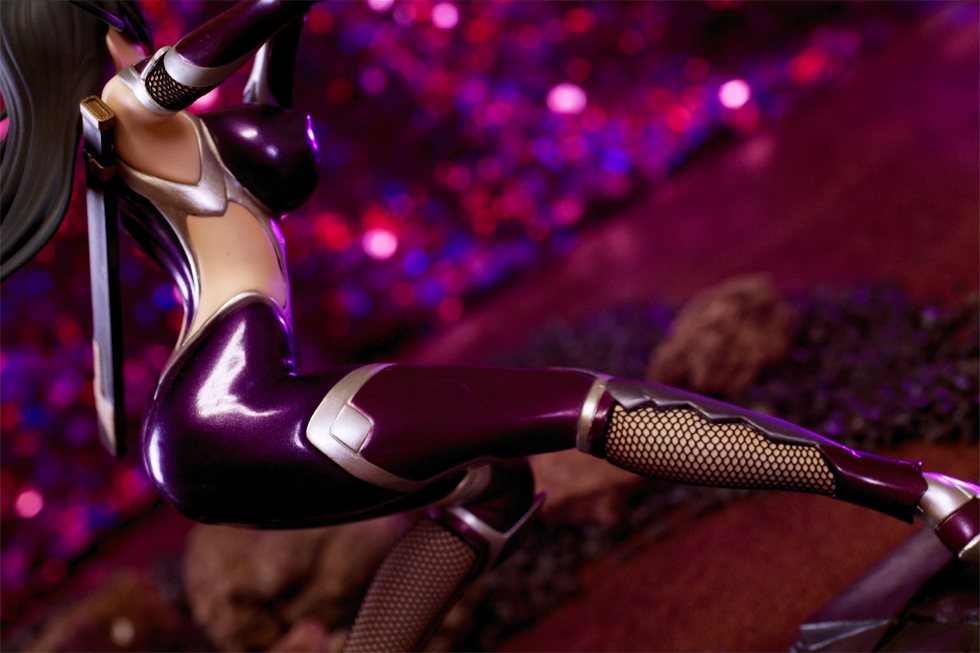 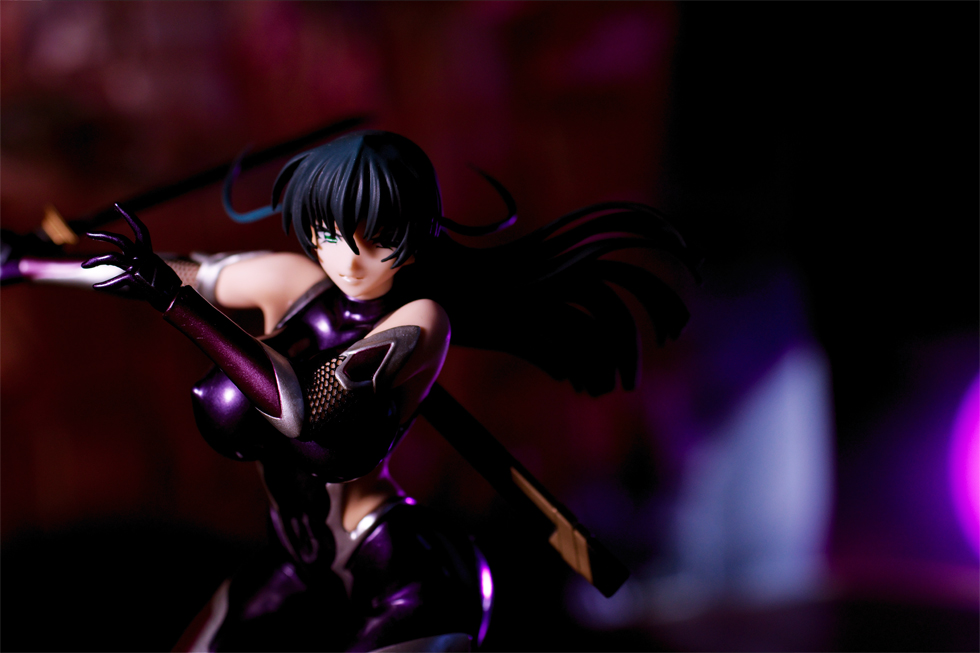 I really like Asagi’s combat suit, it’s shiny and with metallic flakes mixed into the silver and purple color, I could probably have polished her a bit before taking pictures. The skin tight dress follows her body nicely and accentuates her rich curves. The suits design has a dynamic feel, the purple is decorated with silver parts and also fishnet elements. 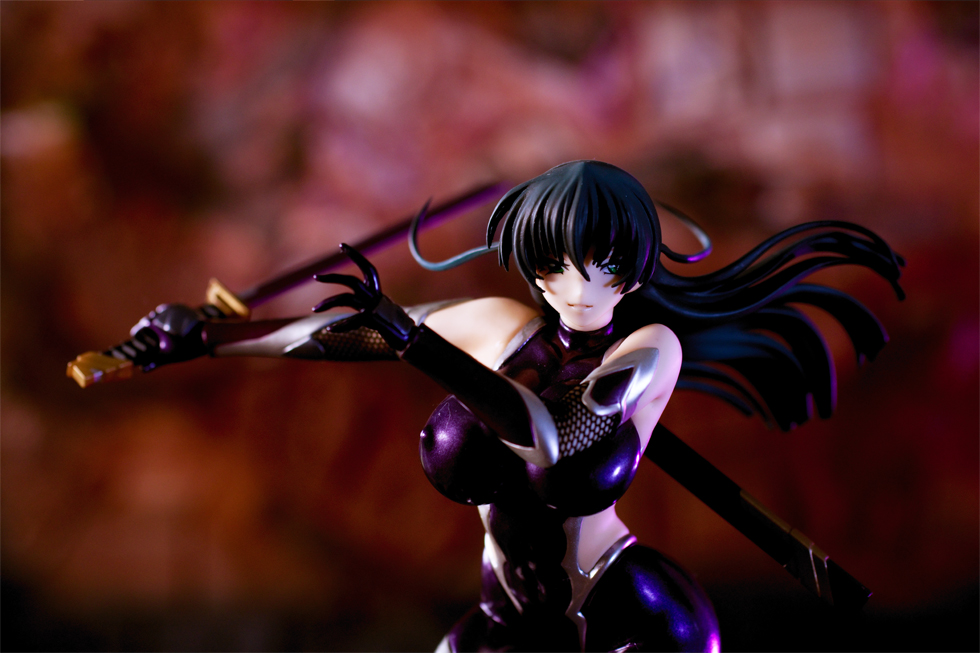 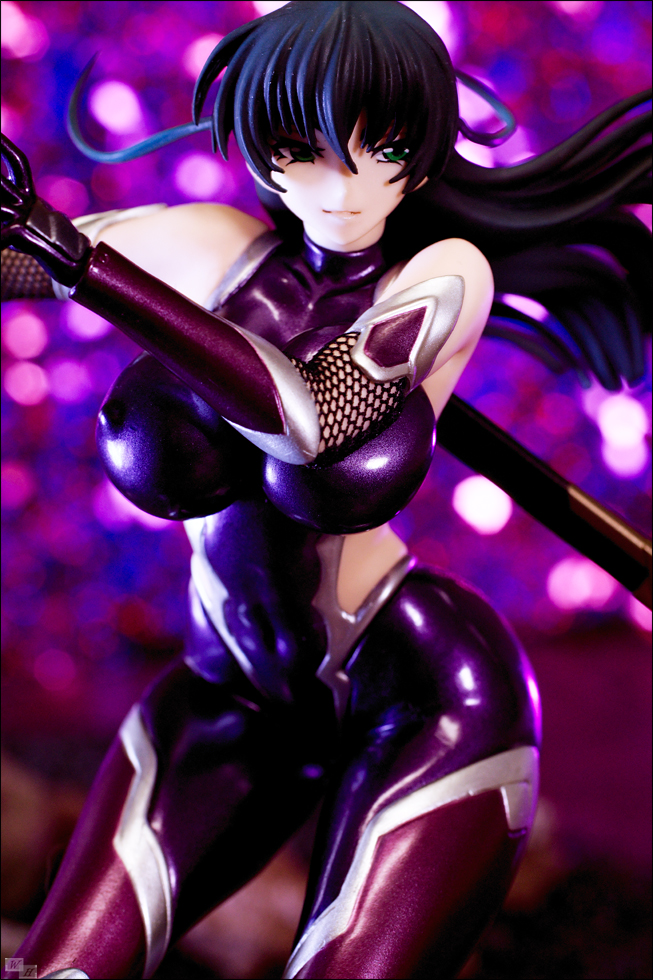 Her hair is painted quite dark with a green bluish shading, the flow is nice and shows convincing strands, the two finer strands of hair complete the detailed appearance. The low hanging fringe makes her more attractive since it gives her a mysterious, sexy expression. 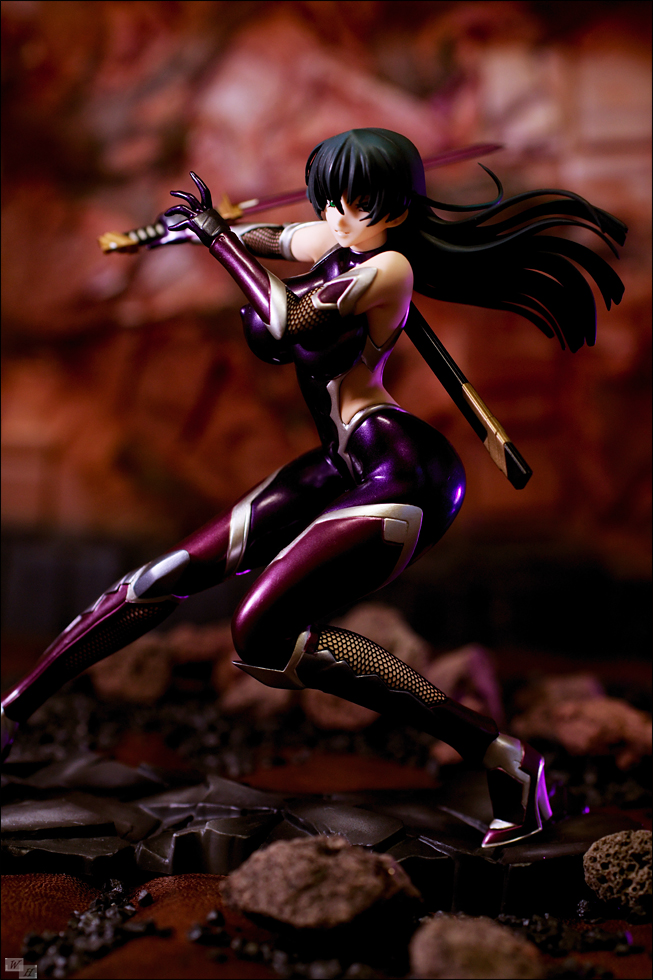 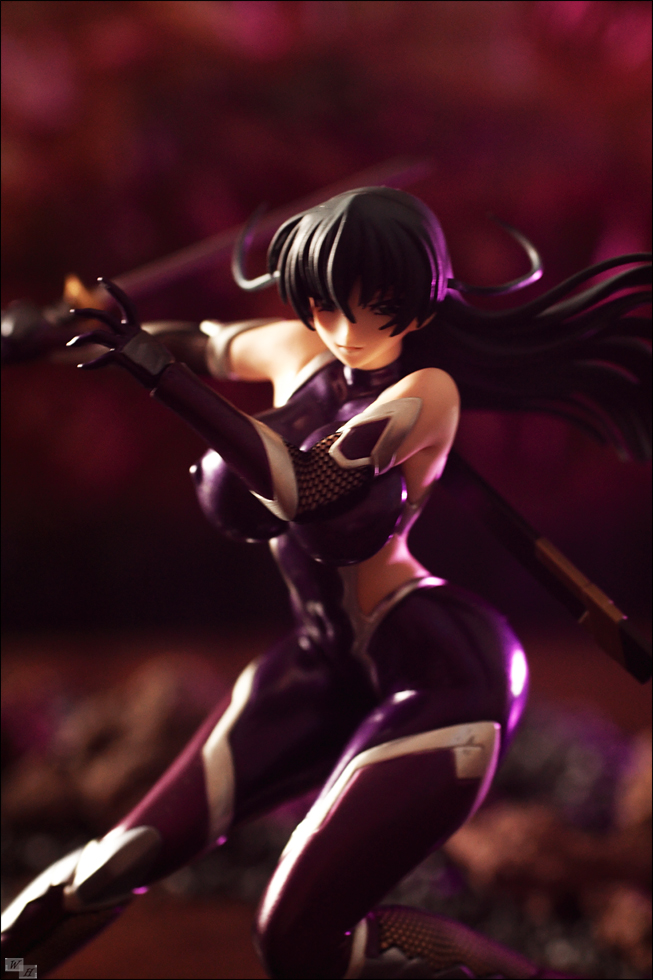 I ‘m very happy about the figures face, it shows a sense of strong willed, confident, maybe there is also a little arrogance mixed into the figures expression. She is someone you would call a tough women, but Asagi can also look very cute. The facial details look very good, also when considering that her head is on the smaller end of the 1/8 scale. Her face is very expressive and pretty, it shows green, slanted eyes, her lips also has some light lip gloss. 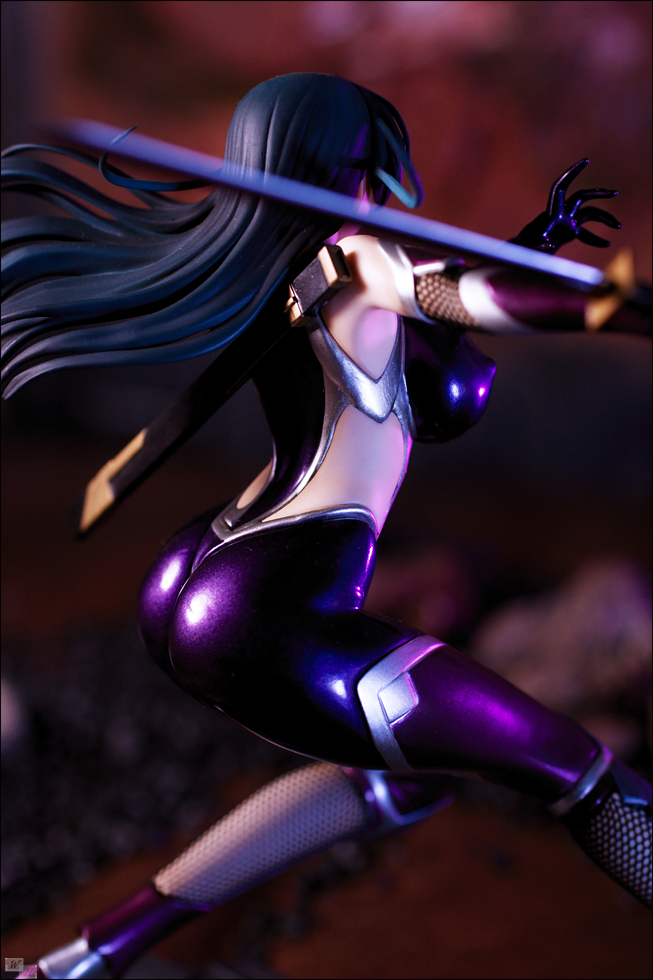 The figure has a nice looking sword with a straight blade, when putting it in her hand you can make it face backwards or forward. 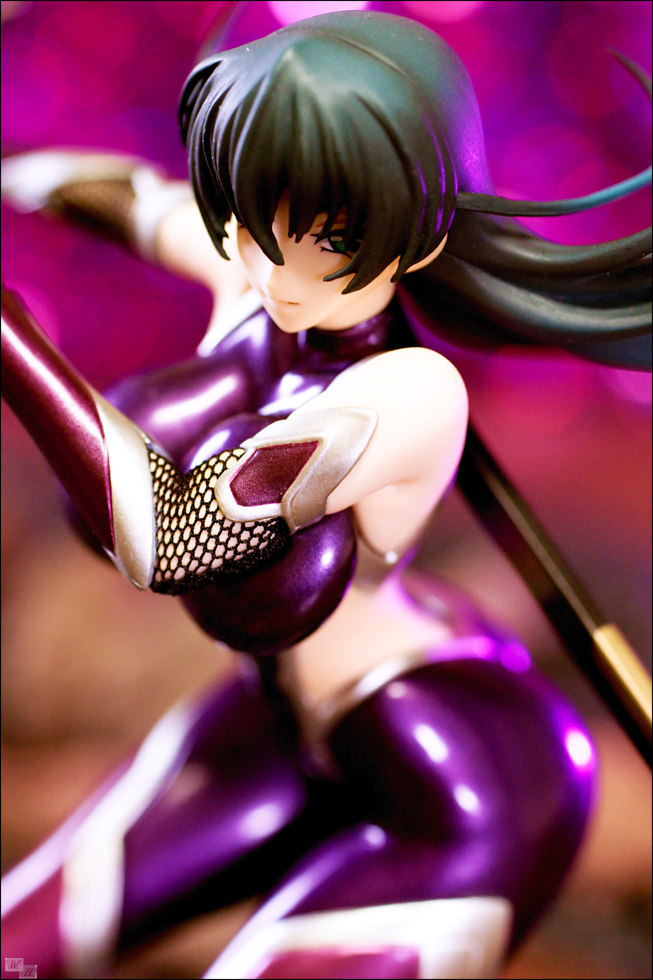 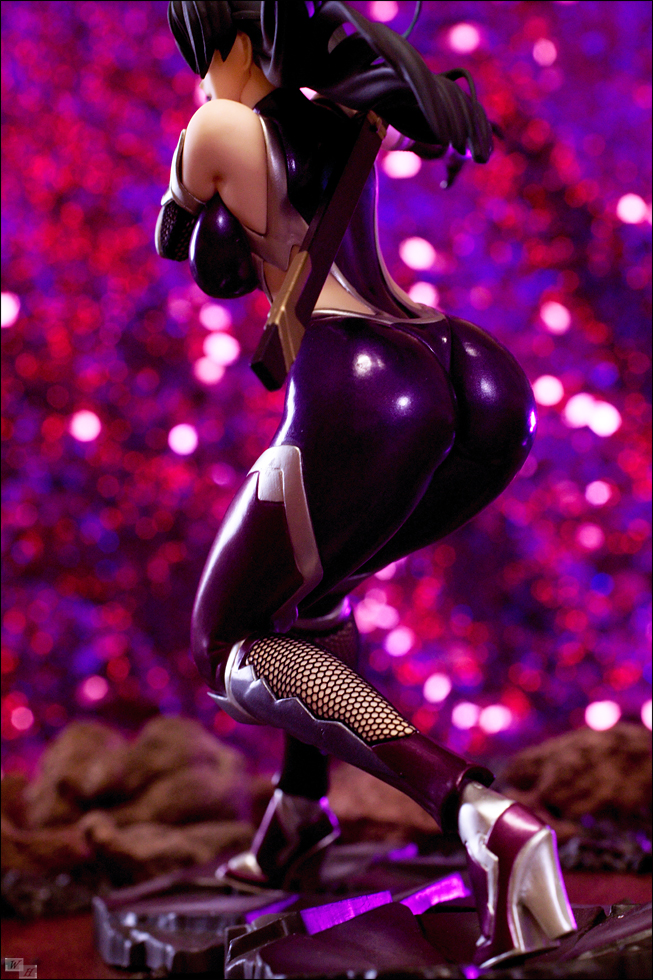 The sculptor captured Igawa Asagi character nicely, but took some liberty with the shape of her boobs and maybe the size, in the anime adaption they appeared somewhat smaller. 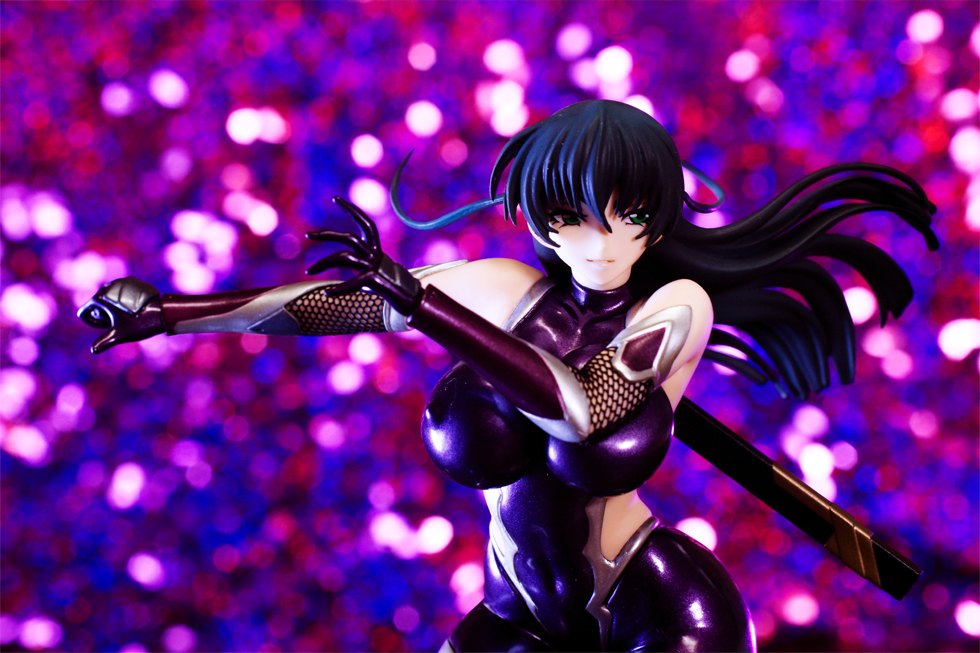 No, I should rather say less big. A tear drop like shape would have been preferable, but I knew it before I preordered this figure so I should not complain. Actually it looks not too bad when you are into women with bigger boobs. On the other hand her proportions are actually balanced, Asagi has very wide hips, a voluptuous butt and strong thighs, so she won’t fall over. 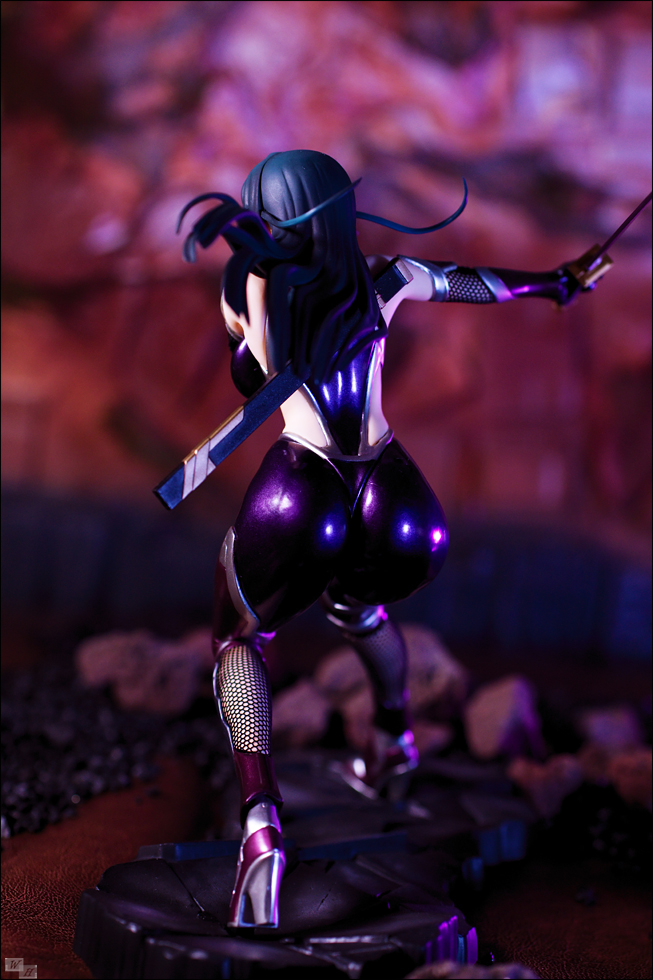 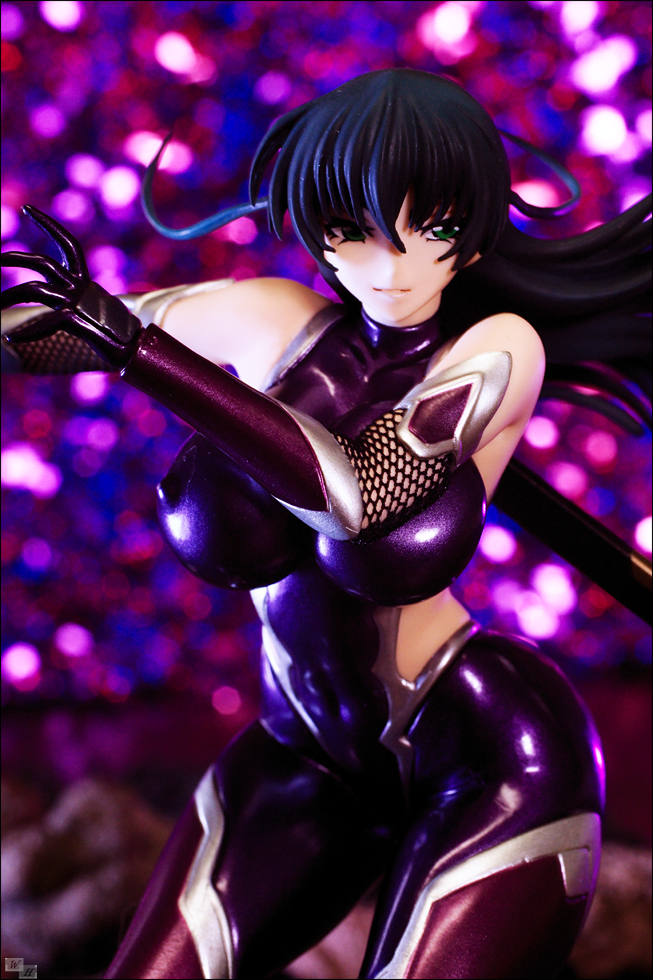 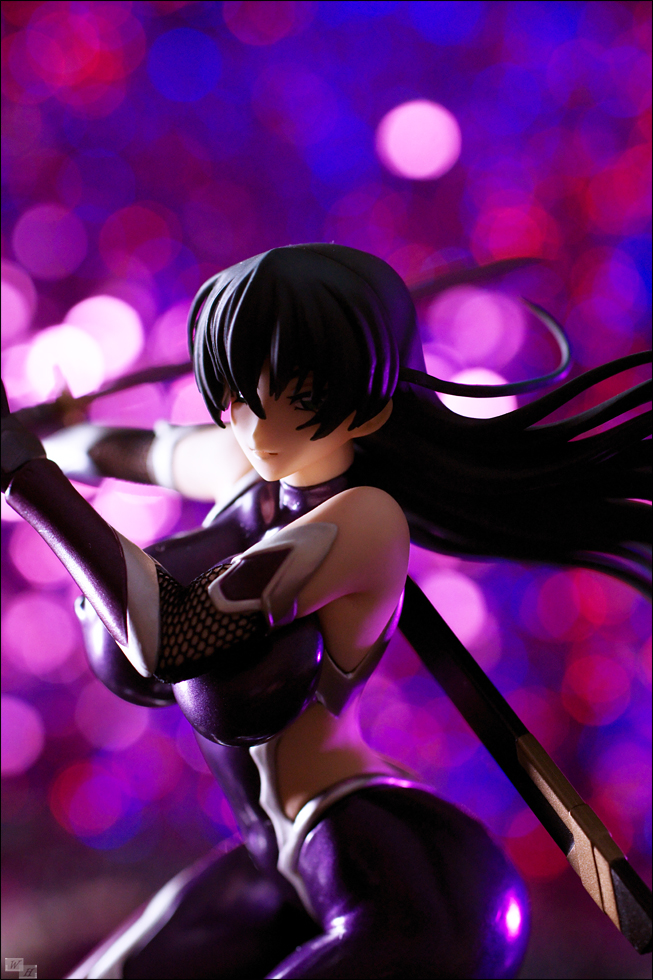 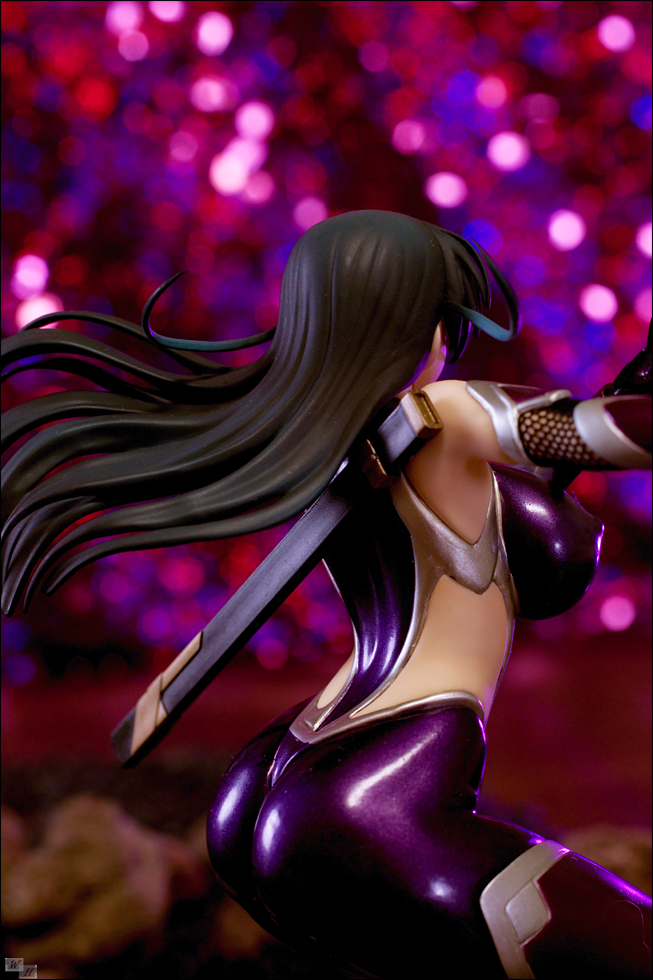 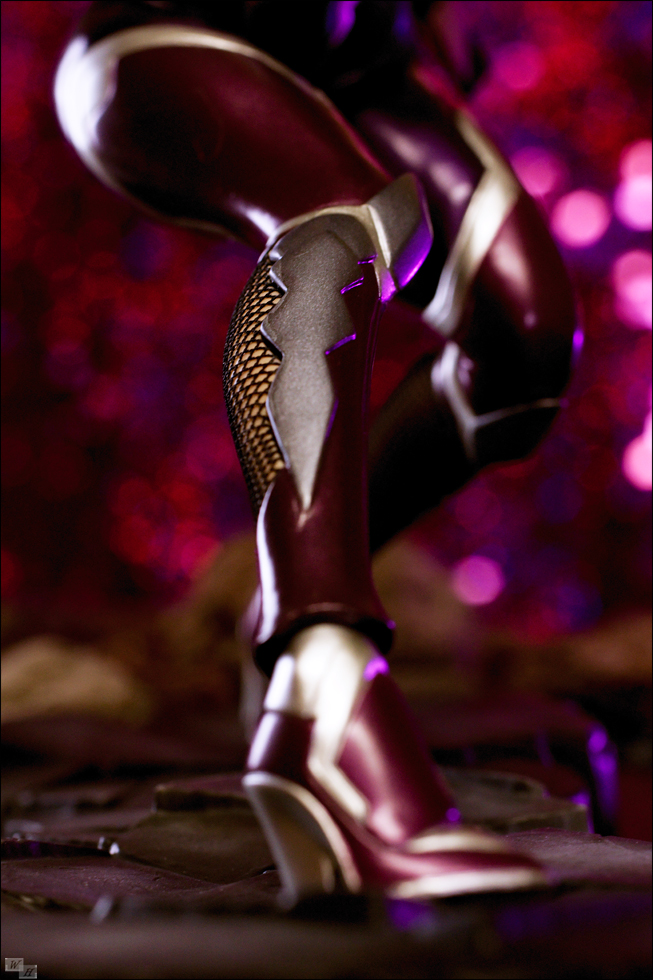 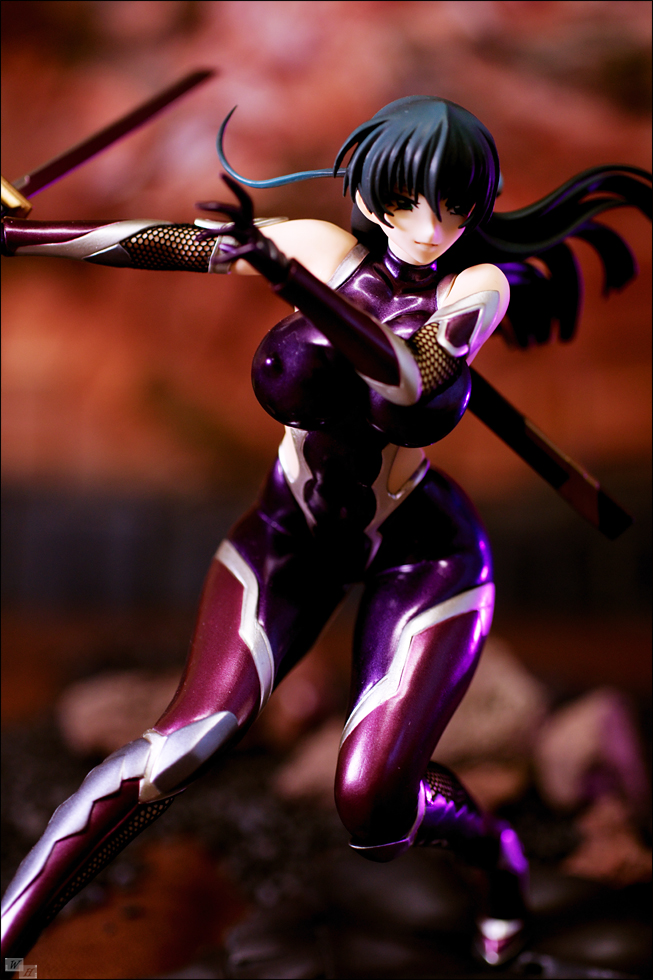 I like this figure, she is purple, fierce and sexy ^^ I love the detailed suit, that shines like crazy and adds a nice contrast to her bare skin. The figure also has a stylish, elaborate looking base.

As 1/8 scaled figure Igawa Asagi looks very appealing and convincing, the dynamic, also expressive pose make her look great on my desk and the face is actually very well done.Still I would have definitely liked her at a bigger scale, too.

On a technical level Milestone left a positive impression with solid craftsmanship and good choice of materials, there are a few things that could be improved, like a few very  minor over painting issues. The sculptor did a good job in reproducing the characters distinctive attributes, the curves are nice and everything is very detailed, like her finely sculpted fingers. 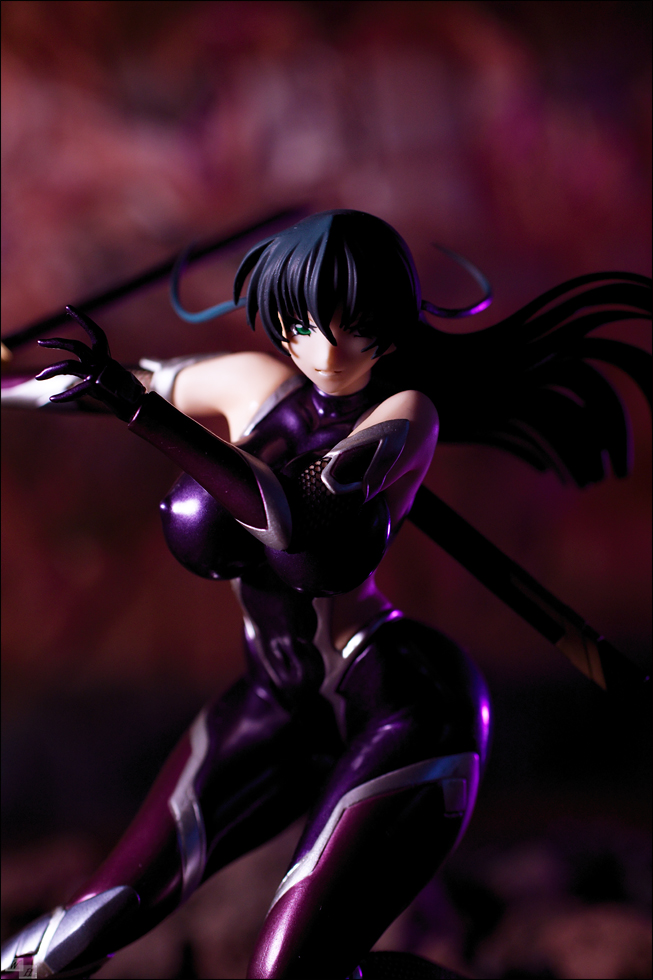 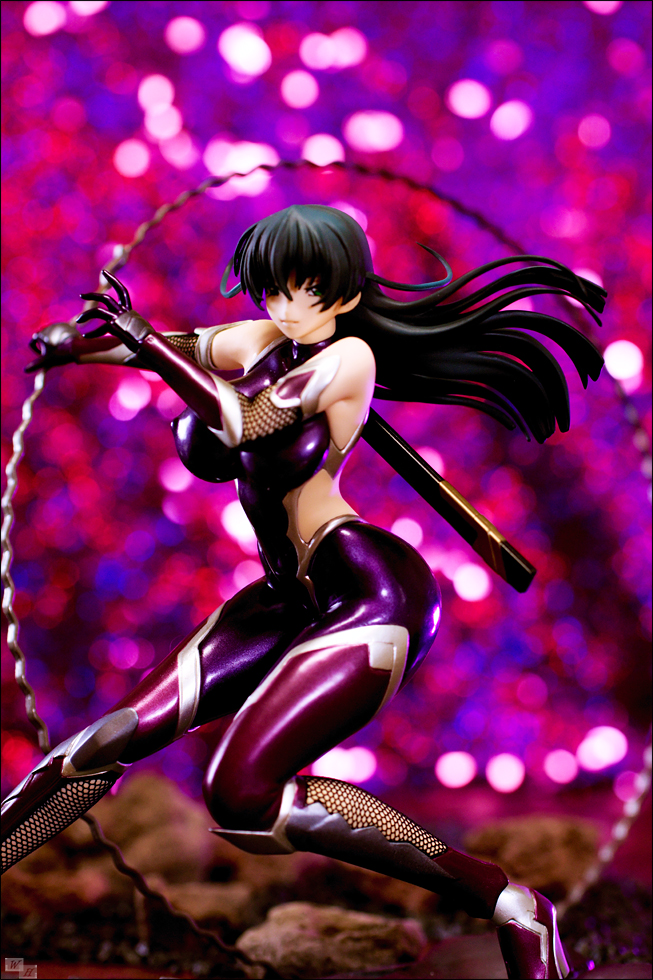 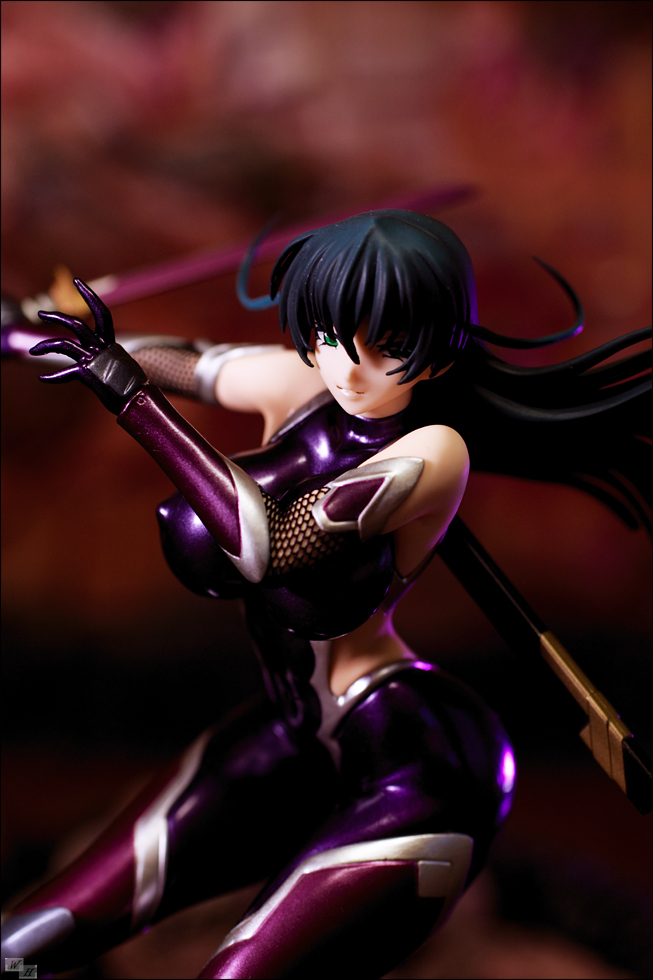 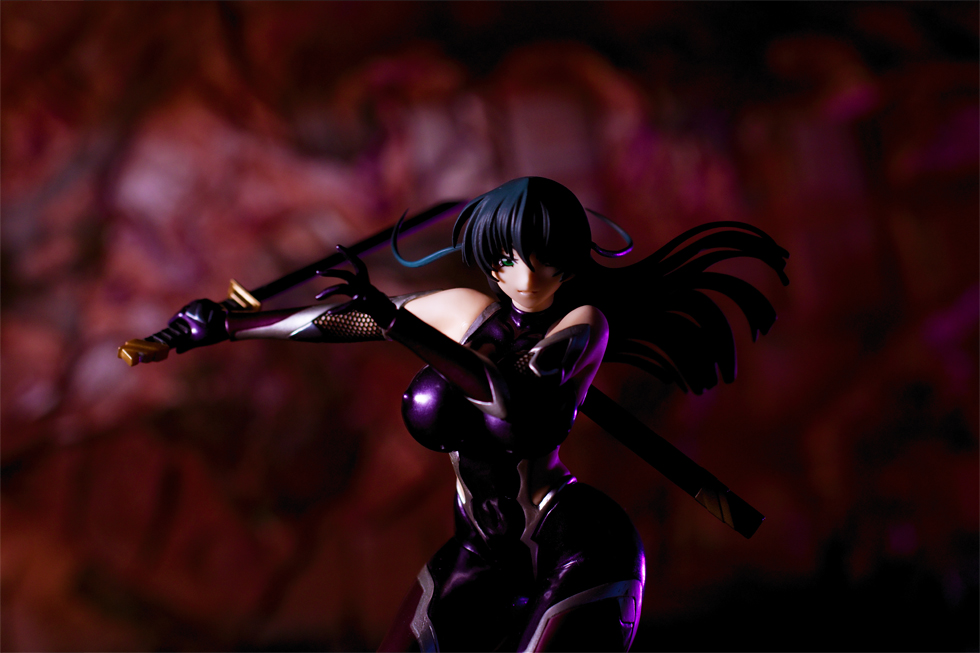 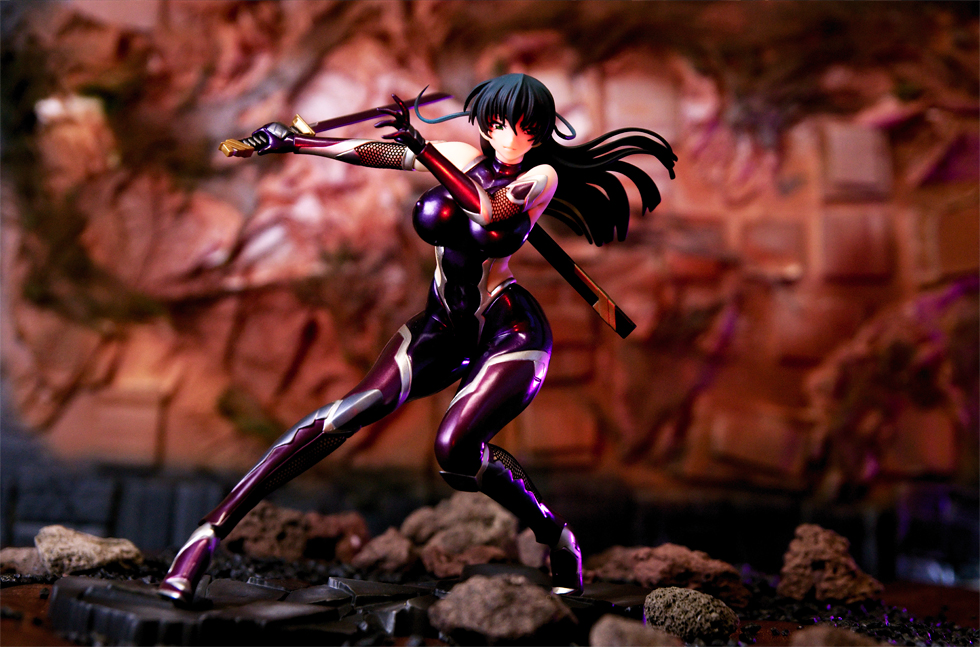 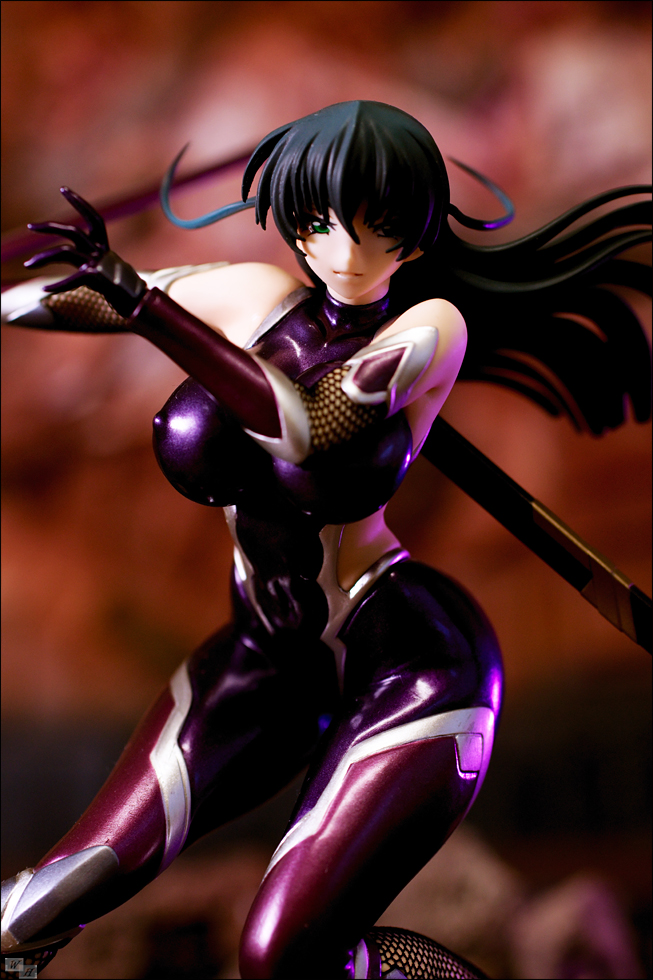 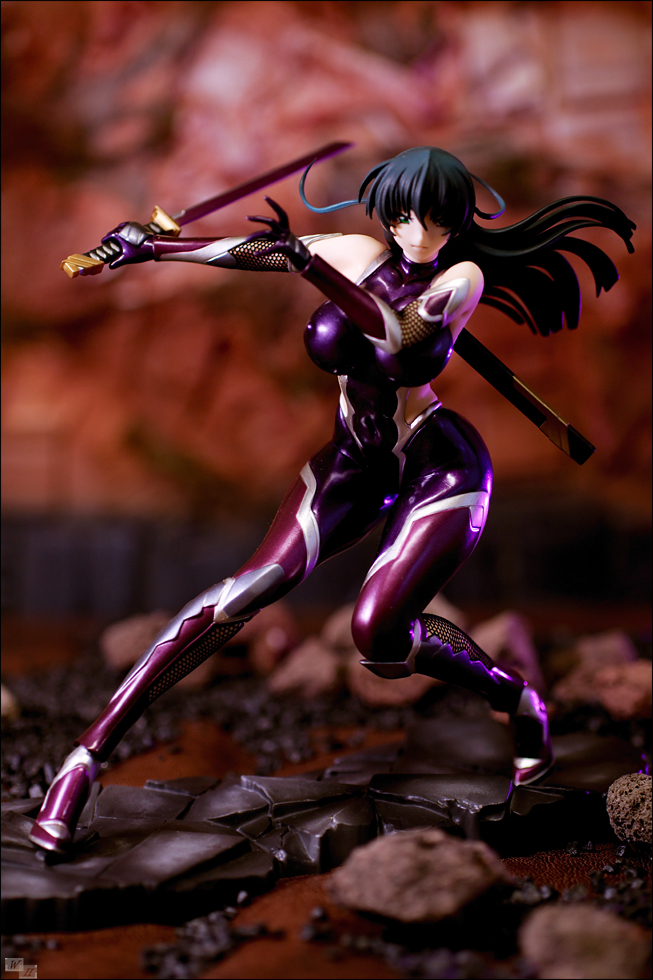